Heidi Was Out First For Afternoon Walk

Normally I would have waited and included this in Sunday's blog post but I thought Heidi deserved her own post on her afternoon. There were quite a few readers that followed the blog when Winston was alive ... they were basset hound lovers. Since Heidi doesn't get out much there are only a few of those readers left and enjoy any kind of news about her. 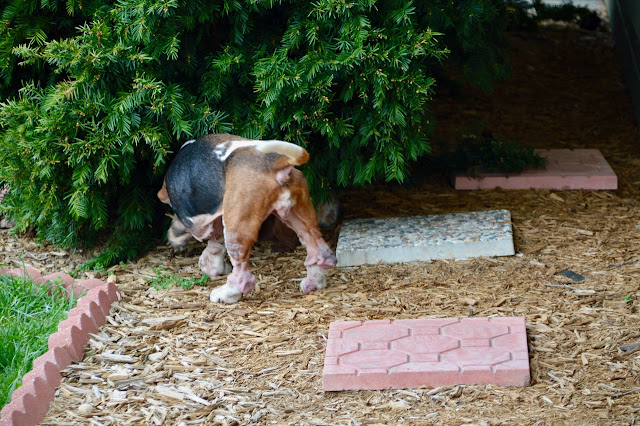 When I announced that 'we are going for a walk' to Sadie and Stella, I heard Heidi jump off the bed and she went running to the door. Could it be true, that she wanted to go on the walk?

When she took an immediate right turn to the front yard I figured that might be all she wanted. Earlier today after lunch she spent over an hour outside by herself while enjoying the warm weather. 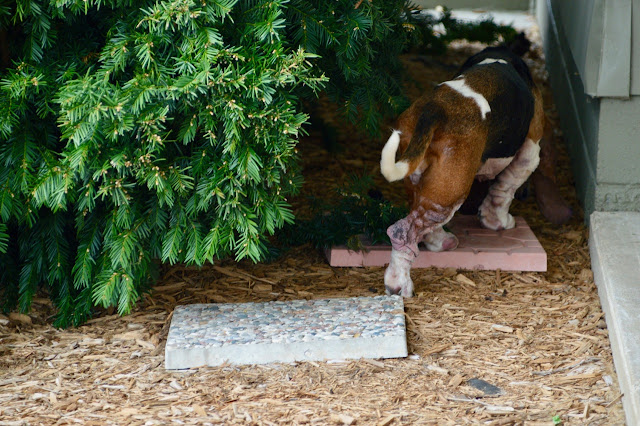 So I was somewhat surprised when I turned to check on her and she was slowly running toward me to join us on our afternoon walk. 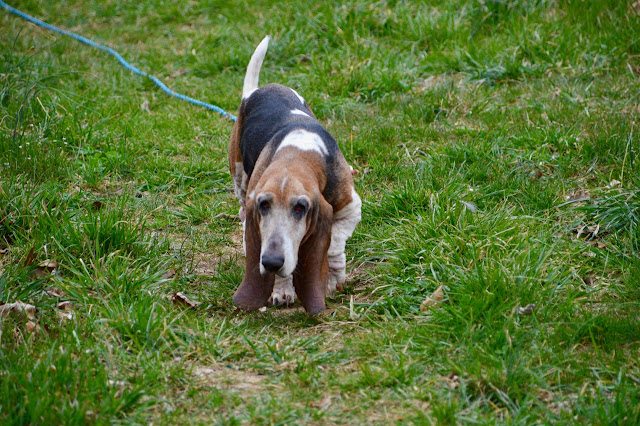 Just 6 months ago most of that front leg was bare skin. It wasn't raw and sore like it had been the previous two years off and on but the skin was soft and supple, with no hair. With the recent change to SPORTMiX dog food, she has had more hair grow and growing on her four legs than any other time since October 2014. 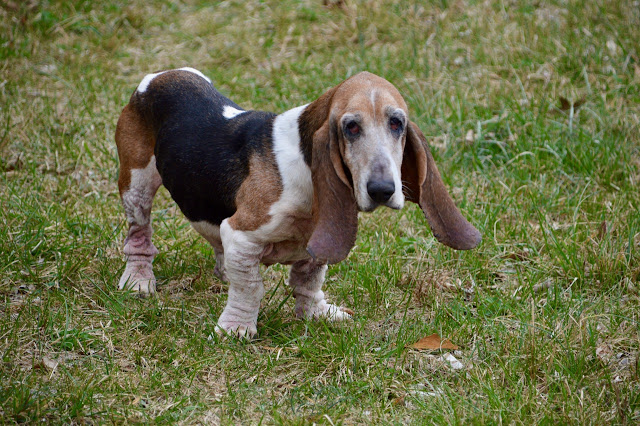 Some of the other bare spots she was showing up on her rear have grown hair back along with the outside of her ears. There were a few spots on each ear that was losing hair for some reason. I think we are somewhere in the 3rd week of the dog food change and she has never looked better. 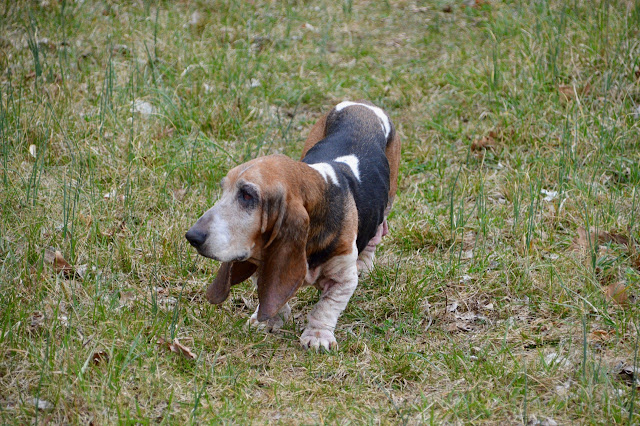 While the bloodhounds hung back Heidi took off on the path to gain the lead with her tail wagging and her ears flopping from side to side. 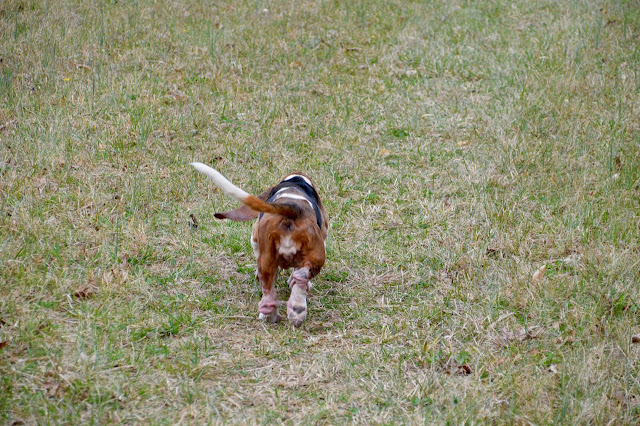 Stella finally passed her and took the lead. I think she tried to intimidate Heidi by walking as close as she could next to her but Heidi did not budge an inch and made Stella walk around her. Stella has even walked on my feet if I am in her way. 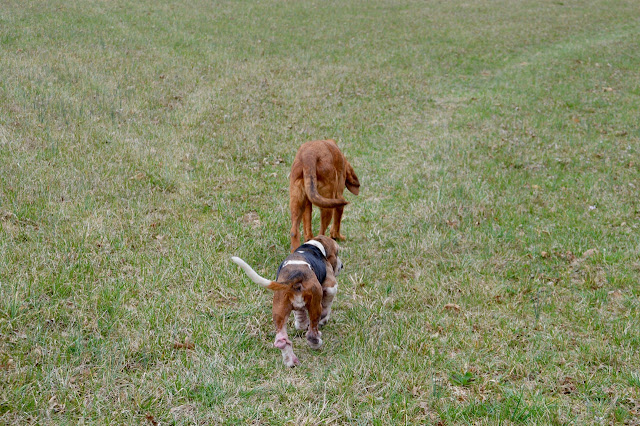 A slight uphill grade here and since this is only her second walk of the season I assume she is not in the best walking shape but even today Heidi would trot in different parts of the walk. It didn't take her long to regain the lead. 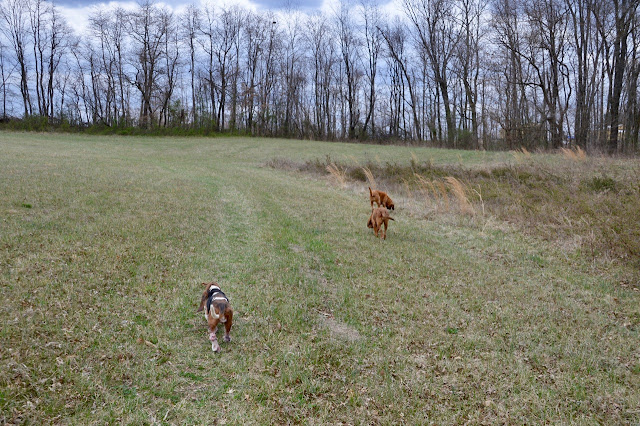 Does it look like she has gained some of her weight back? 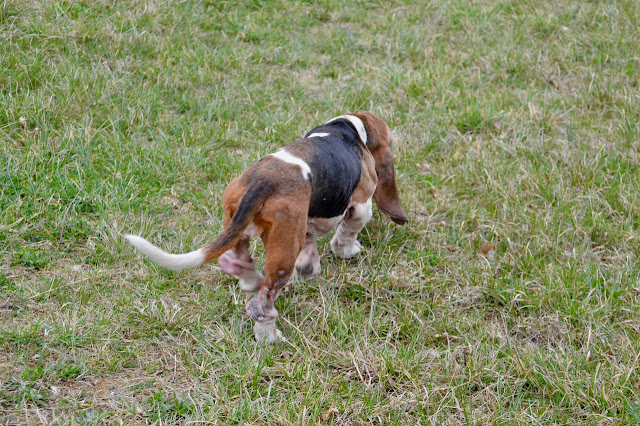 She stopped to pose for the camera but once she heard that shutter pressed she was back to walking in a slow trot. 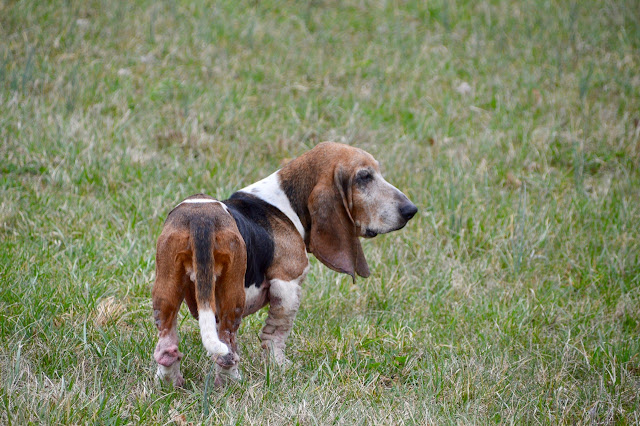 Sadie got a lot of running in this afternoon. She loves this field and loves her walks. 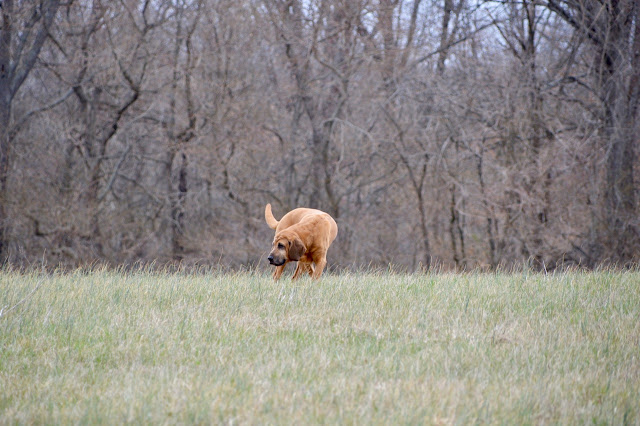 The best guess and that is all it is when it comes to Heidi's age, is that she will be 8 years old sometime this fall, maybe December. Since she was a runaway and not claimed at her local shelter, the basset rescue service did not have any of her birth records, or previous shot records when they picked her up from the shelter in June 2011. 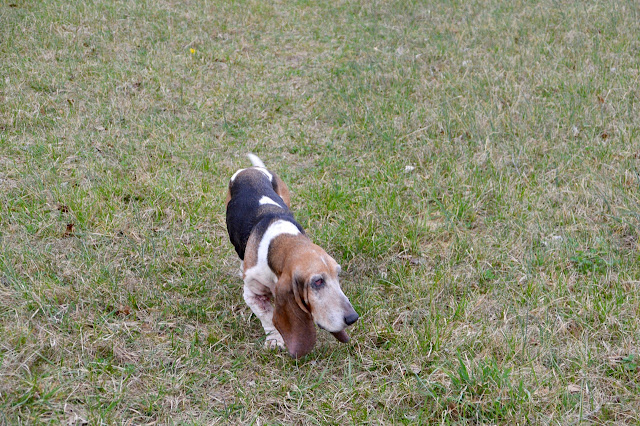 She finds that walking on the path is much easier than the taller grass. 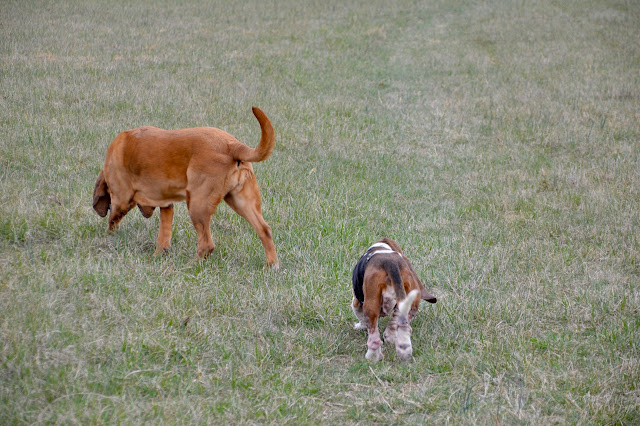 She looks quite a bit smaller than the bloodhounds but she is feisty enough to hold her own when one of them try to power by her. 99.9% of the time neither Sadie nor Stella will do anything to bother Heidi. I remember when I first brought Stella home, she wanted to get Heidi to play. Heidi wasn't interested and barked enough to let Stella know to back off. 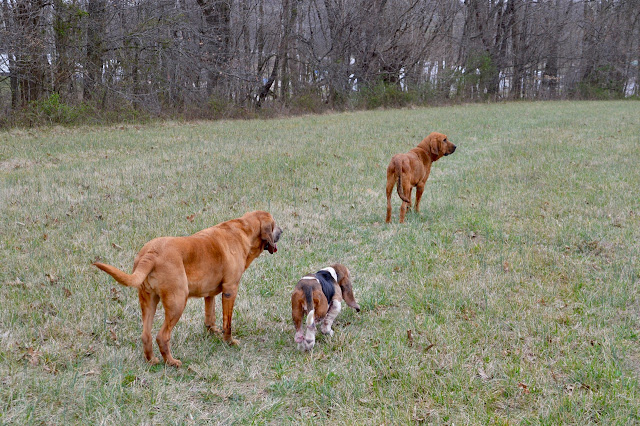 So with a walk plus spending over an hour outside by herself today I think we can officially say it's Spring and we will be seeing a lot more of Heidi in future posts.

Another find day of retirement here in 'the tropics' of southern Indiana.
at March 25, 2017