DST Does Not Bother The Hounds 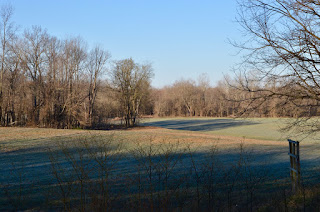 With everything in our lives computerized, there were no clocks to manually move forward one hour last night when turning off the lights around 2am.

The hounds were all sleeping in their normal spots and they didn't wake up any later this morning. Actually based on the 'old' time, we started the day about an hour earlier than we had the past weeks. It was going to be really cold this morning and the hounds found that out was they walked on the 'frozen tundra'. It didn't feel later with the DST time change. 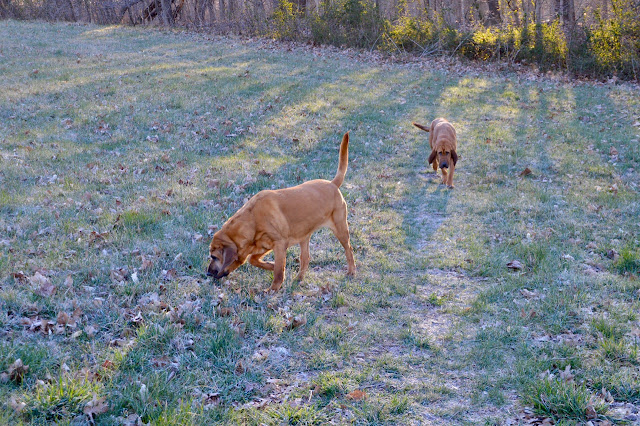 It was the normal routine before starting the morning walk, coffee coffee and more coffee. This gives you some idea that it's in the 20's. The t-shirt and cargo shorts were switched back to wool socks, jeans and the down jacket for the morning walk. At least this morning the down jacket, ski cap and ski gloves were used. Freezing temps are still better than the snow that was predicted. 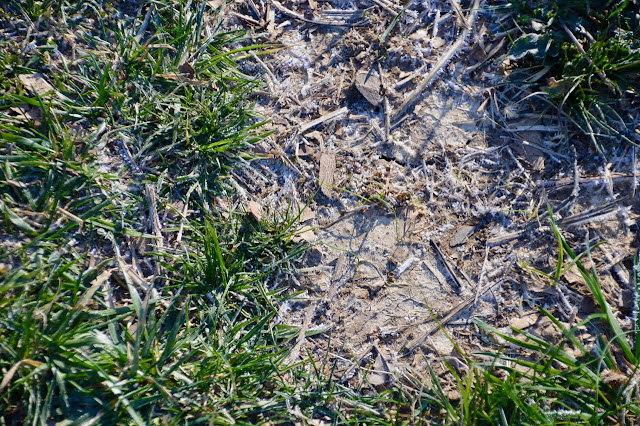 Stella joined Sadie this morning and without much coaxing, she made the whole walk with us, a pleasant surprise. 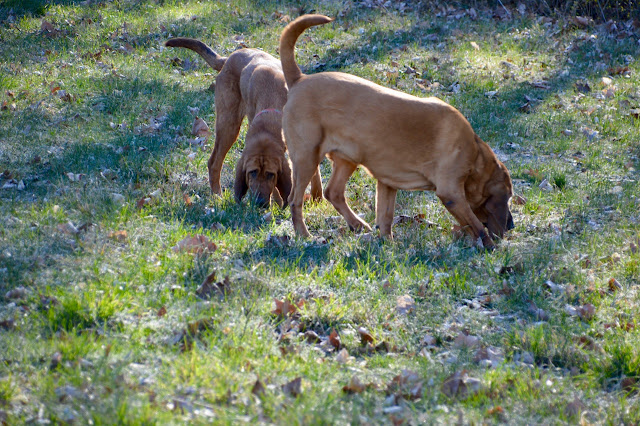 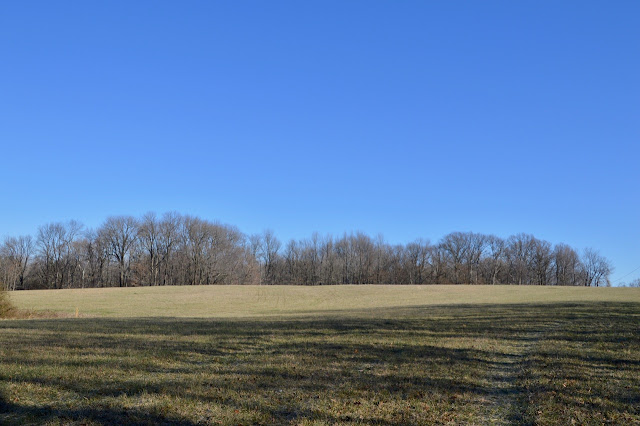 Stella was already into her Sunday stroll pace. Nothing to get excited about today. She will be fed the same time for lunch with DTS not changing that at all. In fact they might finally get their way and eat earlier than 11am (old time). They will determine their lunch time by howling and/or barking. 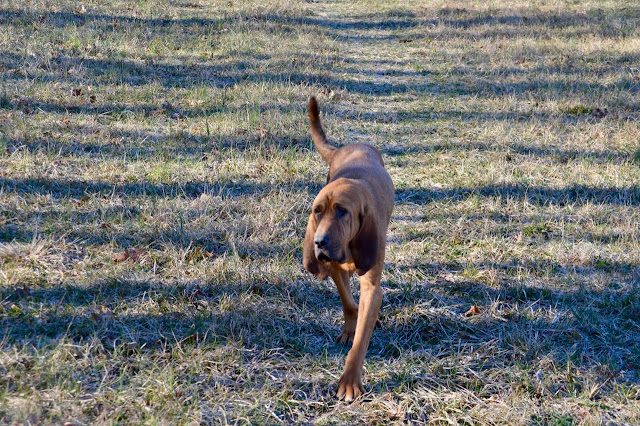 Sadie had been following the edge of the field non-stop, even past the first turn. Maybe the freezing temps make those scents that much stronger. Or, there were just more of them this morning. 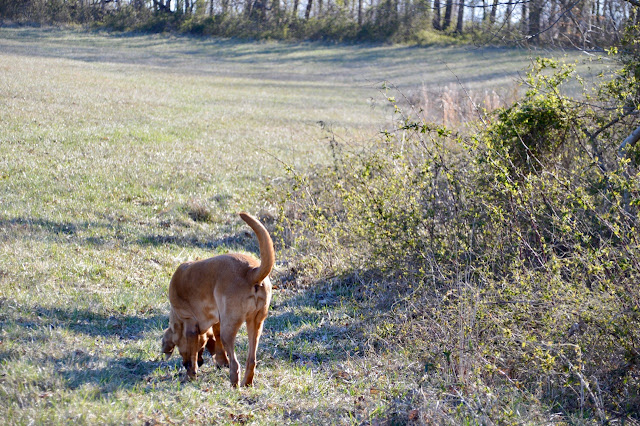 Stella was about to lag behind but right after I took this picture she looked up and trotted in our direction. Maybe it's the colder temps that motivates her enough not to lag behind or follow her own schedule. 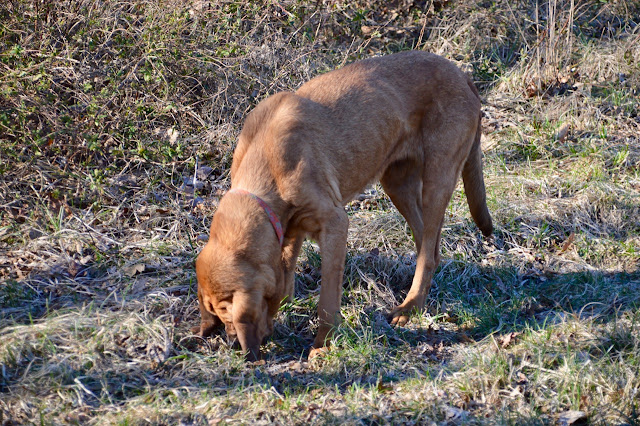 They were excited to get to the far right corner of the field, it's the entry way to the 'deer highway' that reaches downhill into the deep gully. I could almost imagine a group of deer walking through there at daybreak. 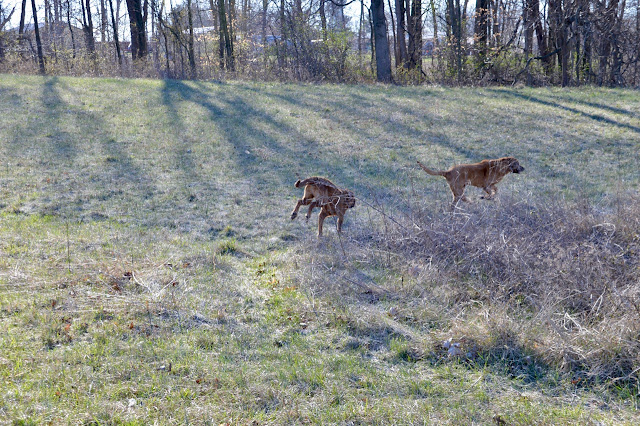 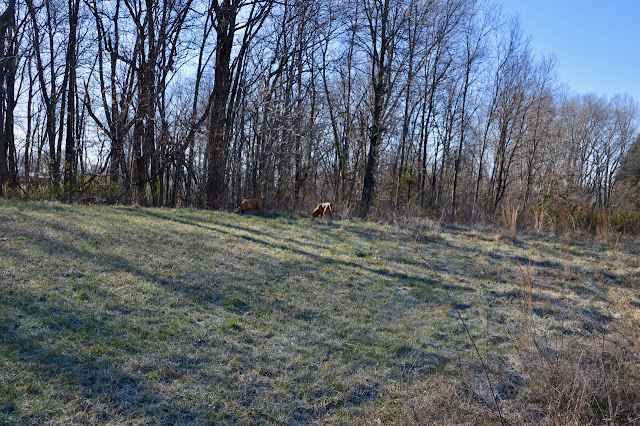 Stella is right on the entry ramp of the deer freeway. 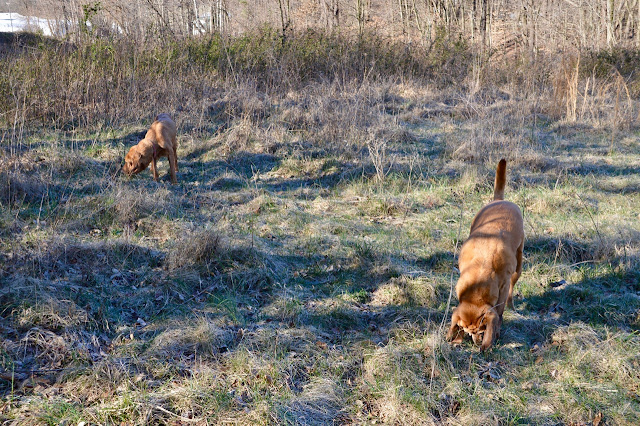 Surprise surprise as she continued to follow Sadie and I. 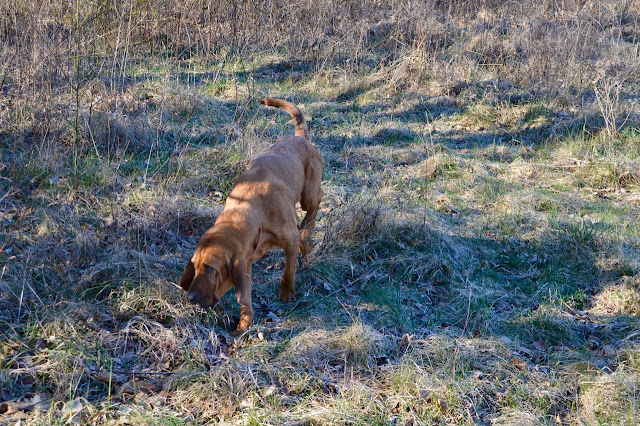 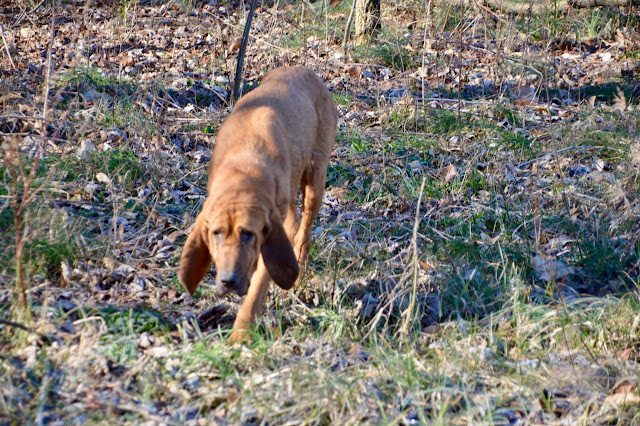 Even from a distance I could hear Sadie making that sound that bloodhounds have when they are really inhaling a scent. Years ago someone that walked Bertha everyday when I had to leave them in a kennel while I was on a business trip, told me she had never heard a sound like that from any other dog.

I heard that sound as I snapped this picture. It's the sound of her jowls flapping as she sniffs deeply into the ground. It is a continuous flapping sound with each inhale. 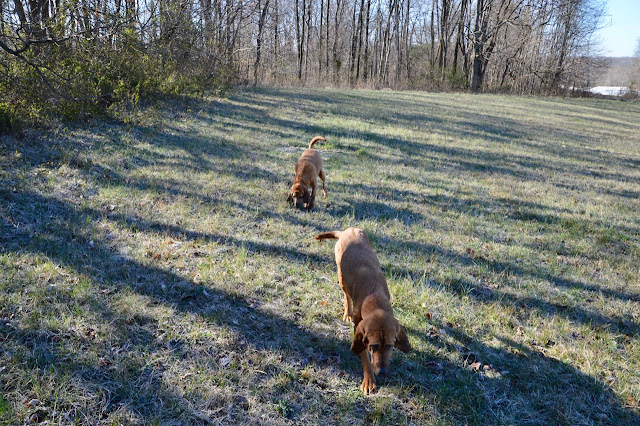 You can tell here that once again she is pretty keen on tracking. She probably lives for these two walks per day so she can get a nose workout. 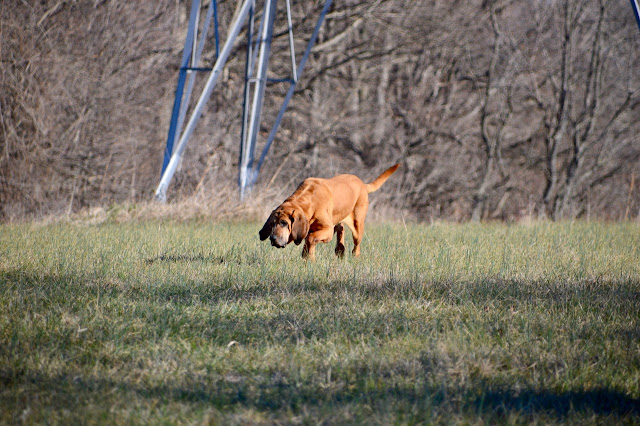 Stella had stood and looked over at the cornfield. She was almost positive that deer had ran through here into the field. Just to the right of her is where I have seen a line of deer follow each other, jumping over the older wire fence that has been mashed down. Once they hit that cornfield they talk off running and hopping high into the air, faster than any bloodhound chasing them. 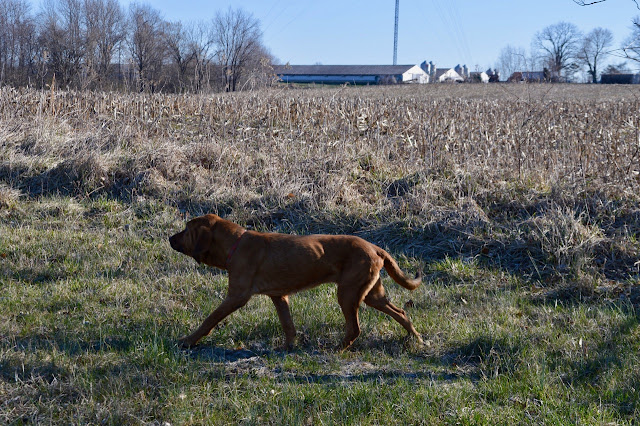 I did not have to say "let's go" this morning. By this part of the walk the hounds were gladly heading back to a warm house while my finger tips inside my ski gloves were numb from the cold. 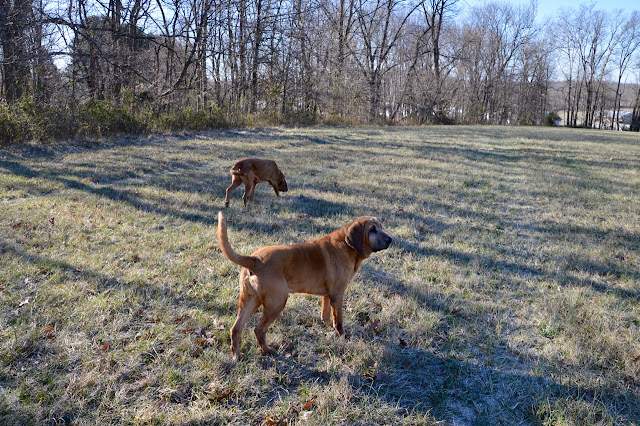 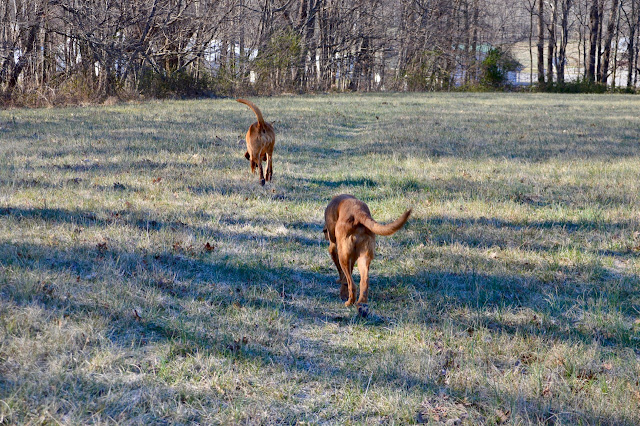 Nearing the house I kept hearing a loud bird conversation. I saw two birds sitting at the top of the Mahogany tree in the backyard. They either heard the hounds or my camera beeping when the focus locked in because as I pressed the shutter, they flew away. The camera caught just one of them. 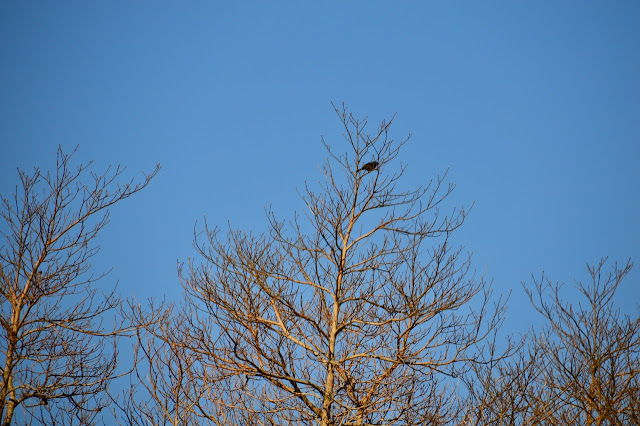 They flew higher and circled back to the edge of the driveway and landed high on the tall sycamore tree. Guess where those hard little round buds land? 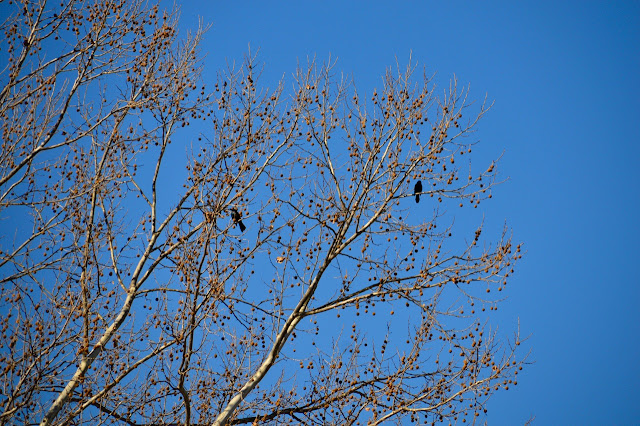 I can only assume after the million of times I had pushed buttons on my Directv remote over the years while watching college football, college basketball, NFL games and MLB games ... it was bound to happen. Last night only some of the buttons on the remote were responding. I was only a phone call away of having Directv sending me a new replacement, free of charge.

Since some of the buttons were still working by changing channels and turning the DVR and TV off and on, I thought there was a chance I could salvage this remote and get it to work again. With 'March Madness' only a couple of days away this is no time to have to wait for a new replacement remote to show up in the mail.

I went into the drawer that is full of all the owners manuals I have for different things. Everything from the Bunn Coffee Maker to that PIA Echo non-starting weed eater. This time I needed to find the Directv Remote manual because I was going to reprogram it. I pulled out the two stacks of manuals that fill the draw to the maximum amount without blocking the drawer.

Not only did I find that manual but the results were even better than I ever expected !!!

A month or so ago I wrote on this blog about a possible 'senior moment' when the owners manual for my Nikon D3200 had strangely disappeared. I was 99.9% sure I had put that manual in this drawer with the others. Multiple times I looked at every manual one by one ... not finding the owners manual for the camera. My memory cells were turning to soap as I mentally retraced my steps trying to remember where I left that manual for my camera.

I had a downloaded .pdf file copy but it always seemed easier to read through the manual in my hands with the camera sitting nearby instead of having to read a manual on the computer.

So, as I am looking for the remote owners manual I see this page. It was one I had looked at 3-5 times before during the prior searches for the camera manual. The "Approved Memory Cards" caught my eyes. I couldn't believe it!!! Could it be??? 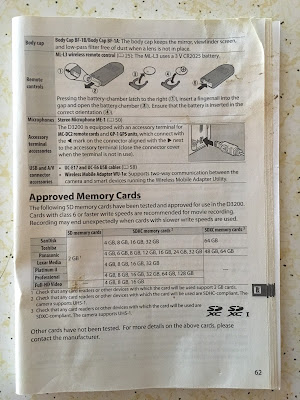 I slowly closed the book back to the outside cover and there was my answer. The Nikon D3200 User's Manual had been there the whole time. I had not lost my mind (that's debatable) and the manual was exactly where I had put it months ago ... in the drawer. 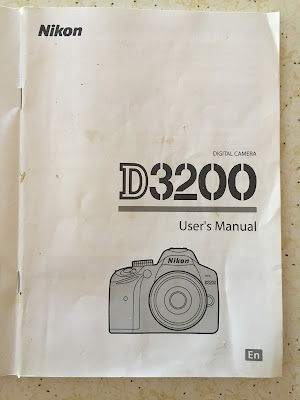 I know that may seem like a small issue but when you finally find something that was missing, turning your memory cells into soup as you try to remember where you put something, it was a great feeling.

There was a 20° increase today temps in 'the tropics' of southern Indiana and that put the hounds back into the 40's which is pretty nice this time of year.
at March 12, 2017