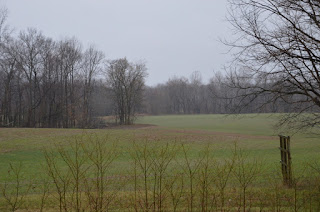 After a beautiful weekend of weather, it started raining sometime late Sunday night and hasn't stopped as of right now, Tuesday at 8:51am.

It may have stopped a few times yesterday but every time I took the hounds outside for a break, and the time I sprinted to the mailbox, there was light rain at a minimum.

This morning it was raining so hard that Sadie and Stella ran to their spot to pee and then sprinted back to the house. Heidi made an immediate right turn just outside the door and scooted behind the Yews and under the roof overhang. I could tell not only by the sounds of the wind last night (strong) but looking at the Countryman this morning that it had been windy and raining all night. 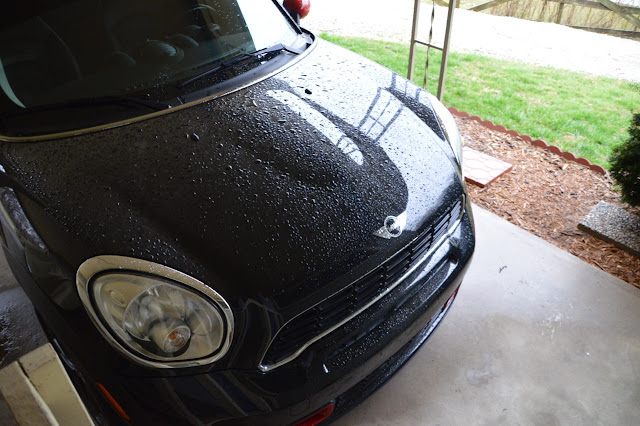 When it gets this much water I know there has been some heavy rain the past 24 hours. It looks like I will have to spend a few days resetting the edging brickes since the ground has pushed them forward. Ground swell is a killer around this house.

The hounds and I have a little bit of cabin fever this morning. Wunderground is telling me this rain will finally be over today at 11:00am, then we will have three days of sunshine to make sure the ground will be dry enough to handle the predicted 1"-3" of snow on Saturday. Throw in the time change late Sunday night, moving an hour ahead ... it should be an interesting week. 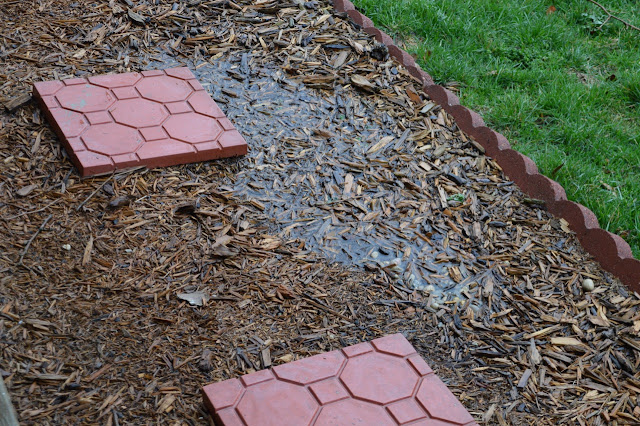 The few times they have predicted snow this year in 'the tropics' it has turned out to be not much more than ground cover. There might have been a day or two with an inch or two of snow but nothing that I can remember.

Looking at the heavy amount of water falling on that red stone tells my my gutter is plugged up with something and not able to drain down the gutter spout. Hard to imagine what that might be since there are no leaves, and I cleaned out the gutters in the fall and on a nice day in January. It might be that the water is backed up due to the large amounts of rain at one time.

I will get up there this afternoon and unplug whatever is the cause. At least the lawns in the neighborhood are getting green. I've never seen as much lawn damage by moles as I have this winter. For the first time that I can remember in 19 years, they have moved to the front yard. 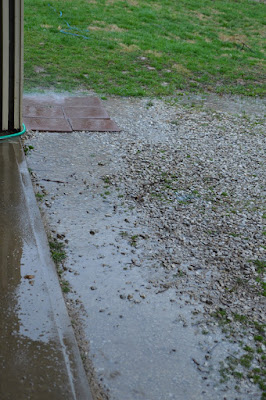 I guess it was the perfect time to play around with blog themes on Wordpress. I changed mine three or four different times on Monday. Looking through the 189 free Wordpress options, I soaked up a ton of data usage. Not this blog, my other one on the sidebar.

When it was all done ... I went back to the same theme (template) I started with over a year ago. Since I have deleted that blog a couple of times and rebuilt it, I don't have many posts there right now. I do have a slide show of 40 photographs of the hounds.

I usually don't watch much tv besides ballgames and an occasional movie. If something shows up interesting on the Discovery Channel or the History Channel then I'll tune in. I have my DVR set to record the new shows as they return to the tv schedule.

One show I really like is Dr. Jeff Rocky Mountain Vet on the Animal Planet station. He does some amazing work and a large amount of customers. I watch my taped version but I think this show is on Saturday nights 9pm eastern time.

Yesterday and today are times I am happy I moved the Z4 to the inside parking space along with the car cover. It was so windy last night the only way the cover stayed on the car was the bungee cord under the car connecting the two grommets on each side of the cover. 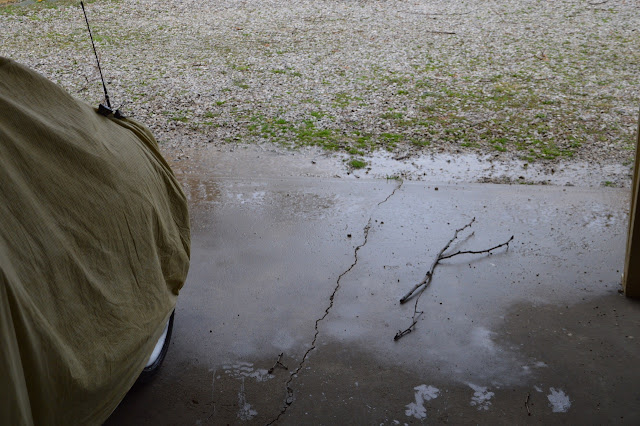 So after watching the one hour show of Dr. Jeff, I caught a show I had not seen before but found out later it was in it's 2nd season. They were showing The Last Alaskans, one show after another. I set the DVR to tape them and then after the first hour show I started watching the taped version so I can fast forward through each commercial.

The show was so interesting that I watched 4 straight hours while hearing the wind howl outside and rattling the storm windows. For those of you that live in or travel in small fiberglass trailers and combat those 50-60 mph winds out west ... you are to be commended. In fact any size of RV in those kind of winds at night, you should be commended for what you go through.

Still raining fairly hard at 9:15am. 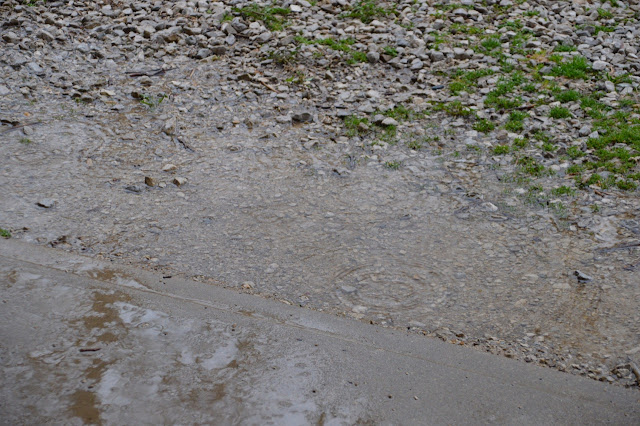 Sadie of course is sitting at the door way of the computer room, giving me the stare ... wanting her morning walk. But with the amount of rain in the past 24 hours and right now, I believe her walks will be held off for another day. There is nothing good about two bloodhounds with muddy paws that go past their ankles. (About the time I posted this blog post, her kong ball rolled over and hit my chair leg ... the game of fetch had started)

She will toss me one of her bones or balls today to play some indoor fetch. That seems to help with her cabin fever. Heidi has been back in bed since just after her breakfast kibble (normal) and Stella is working out the Nyla Bone before she starts howling for lunch around 11:20am. I'm serious when I say that, she does howl for breakfast and lunch. Maybe sometime I can figure out how to post a recording of her howling here on the blog.

Just to show you the hounds are alive and well ... here are a few pictures of them on Sunday. Heidi made an appearance outside and stayed out while I sat in a chair enjoying the weather and the bloodhounds roamed the field. The biggest news of Sunday, it was hound toenail day. Sadie finally let me cut all of hers in one setting. There is never a problem with Heidi or Stella getting theirs cut because they lay down and roll on their back for me to cut them. 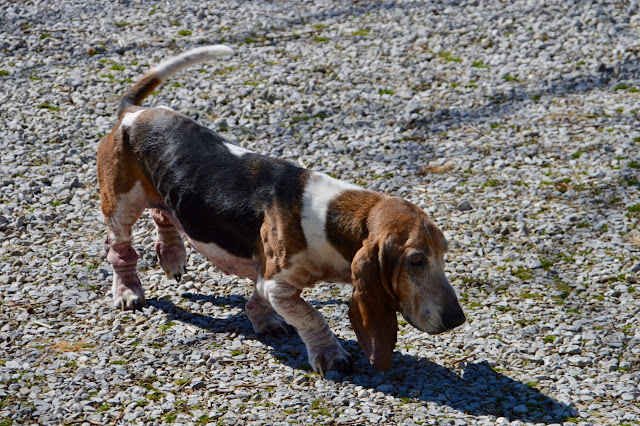 Stella enjoying Sunday afternoon while Sadie runs to her spot out of bounds before I can call her back. I guess I cut back too much of the brush last fall, giving her an open area to access the wooded area. 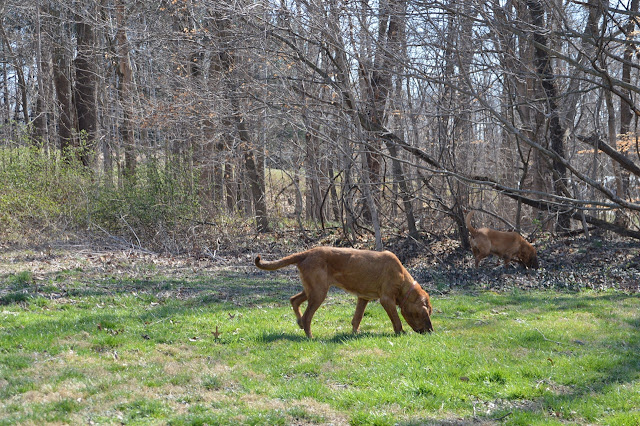 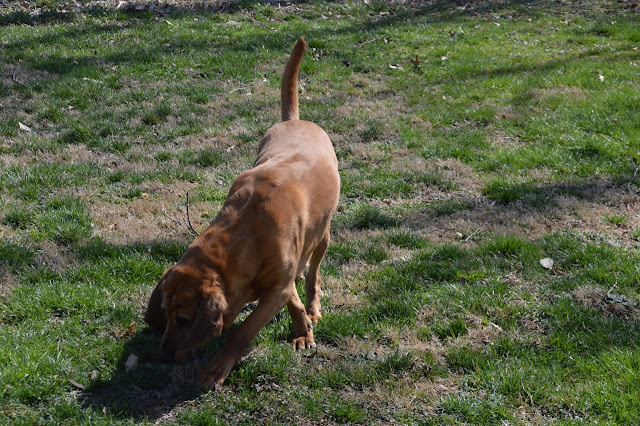 This was the only picture I took of the hounds on Monday ... light rain, so we were not outside long. 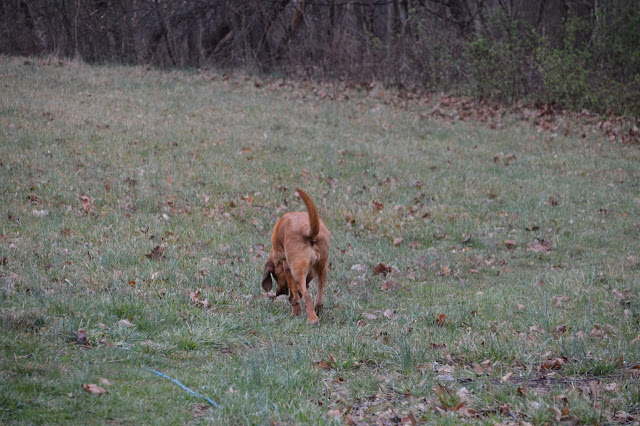 With the weather, not much is planned outside today. I hear the dishes screaming at me, so they will get washed today while the vacuum is yelling behind the closet door. Washing dishes and vacuuming will be the highlights of the day.

Sadie or Stella can change those plans at anytime with more exciting things to do. If that happens the Nikon D3200 will be in my hand recording any interesting things they do.

Thanks for stopping by to check on us. At least it is warm in 'the tropics' of southern Indiana today.
at March 07, 2017
Email ThisBlogThis!Share to TwitterShare to FacebookShare to Pinterest
Labels: March Weather, Rainy Days, TV Shows, WordPress