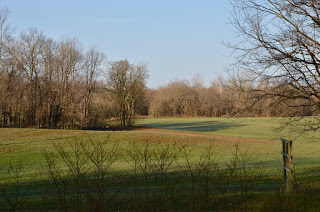 Again it was the normal routine this morning. Another beautiful day in March and questions on where winter went or if it even arrived this year in 'the tropics'.

It looks like the weather experts have shoved their predicted snow tomorrow completely off of the schedule and in exchange only a week of colder temps. I'll take it, the hounds will take it. I could tell though this morning was different for them.

Stella had found a new bathroom spot, Sadie slowly sniffed her way to the back next to the bushes for hers. Surprising to see both of them turn and run back to the house when they were finished. Coffee was waiting for me inside. 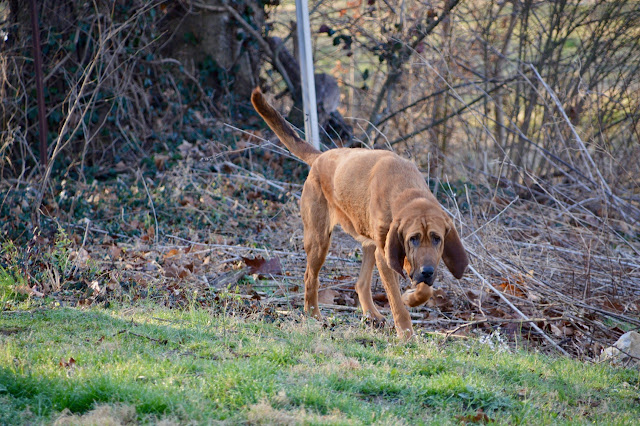 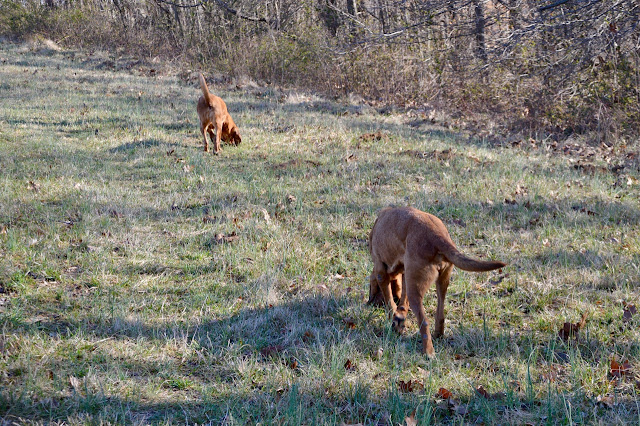 I wanted to get an early start on our morning walk today. It looks like my basketball tv marathon starts at noon local time and my last game I am interested in, UCLA, will not start until 11:35pm local time. I won't watch every game but there looks to be 4-5 games I will sit and watch from the couch. 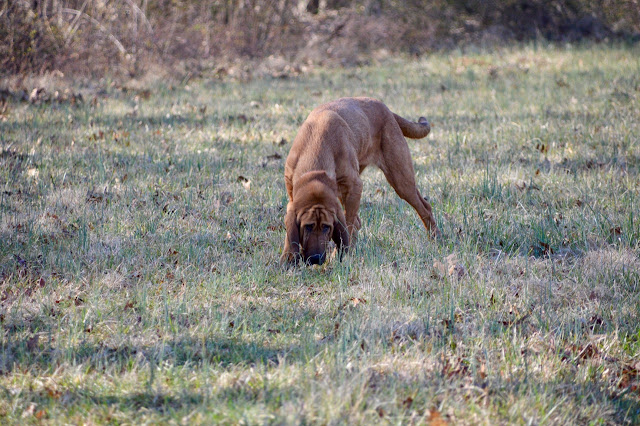 Right after we started the walk both hounds had their noses to the ground and both were walking very very slow. It is their process of identifying new scent. Neither was interested ingesting what they found, just ID it and moved on. With their slow pace I was able to get more pictures of their faces instead of their butts. 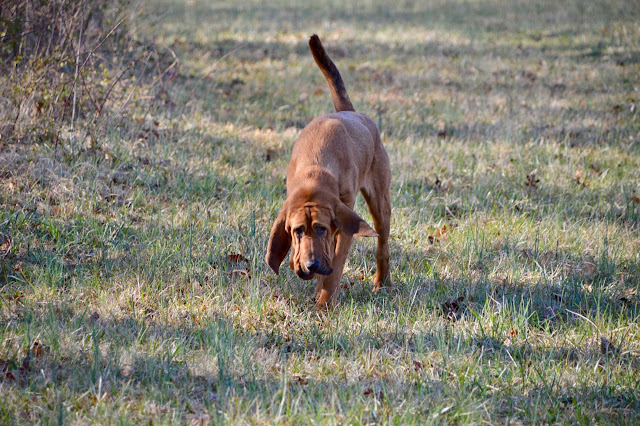 They moved together, slowly one step at a time and at times would meet to compare information. They seemed to be working as a team today. Funny to watch them because I could tell they were really thinking about what they were finding and frowns on their foreheads were showing a lot of analysis taking place. 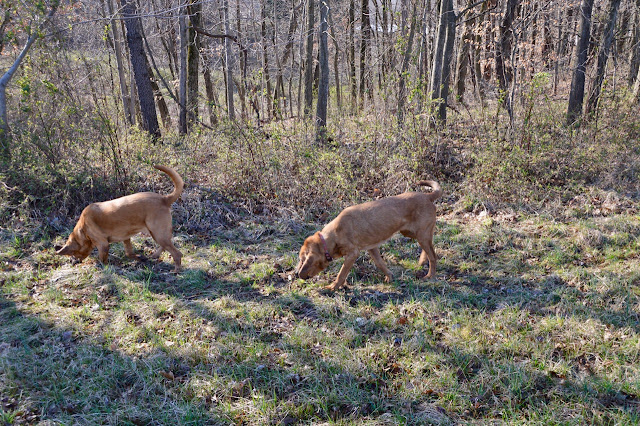 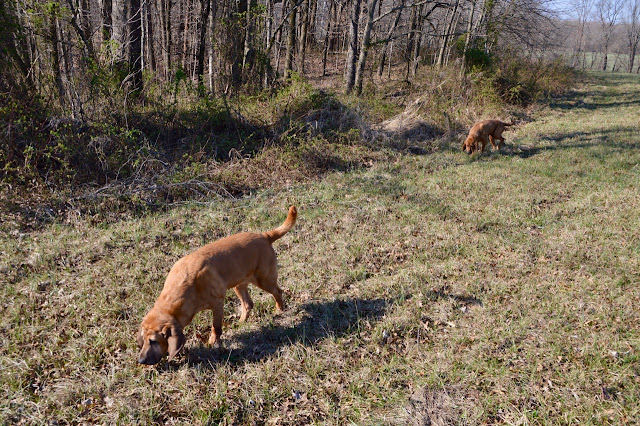 Sadie was about to sprint around the corner but stopped immediately to turn and look at me to see if it was okay. Once I told her to "go on", she and Stella took off. I moved in their direction tip toeing over the water that was still standing right by the corner. 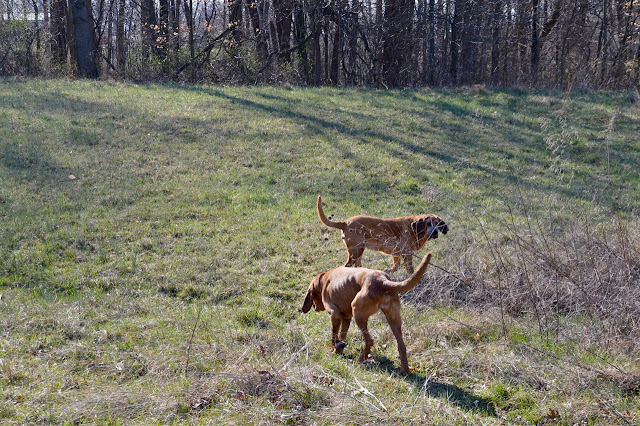 As you can see the hay/grass is getting green pretty fast with all of the rain we got last Monday and Tuesday. There are spots in my yard that I could mow but they are just clumps of grass in different spots. 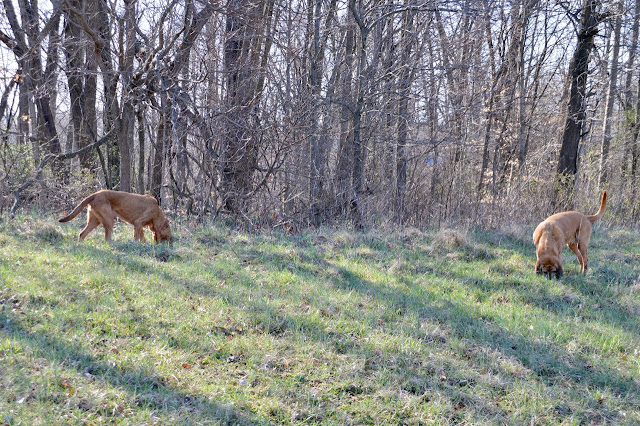 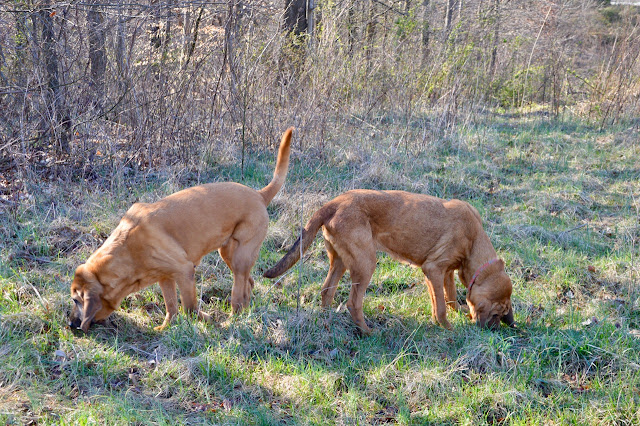 What I call the 'back edge' of the field is off to the right of the picture and heads toward the woods. Straight ahead you can barely see our path (greener) that is across the picture and veering to the left. 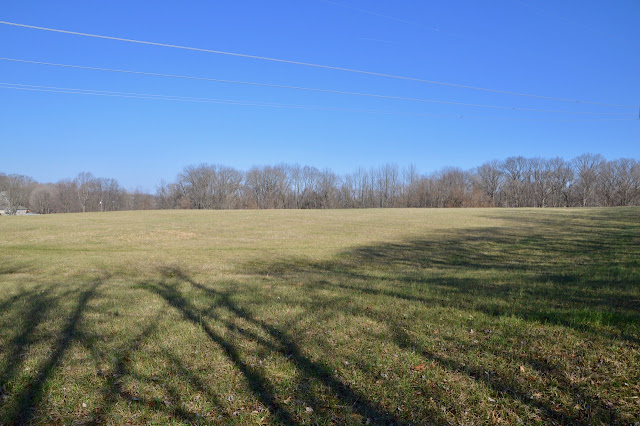 Stella was finding a lot of good stuff. She almost decided to stay behind. I had to send Sadie back to get her with the command "go get Stella". She ran, poked her nose at Stella and sure enough, they both turned and trotted toward me. 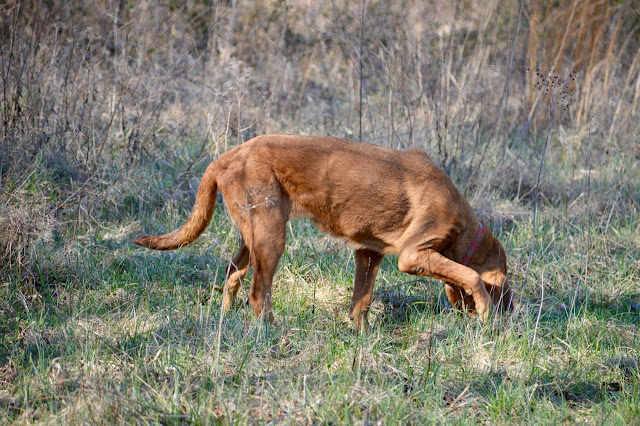 They didn't wait for me as they sprinted past me and went along the back edge of the field. I could see signs of a lot of deer traffic and Sadie was pretty sure that they had made a right turn, ran through the brush and jumped the small wire fence into the corn field behind this field. 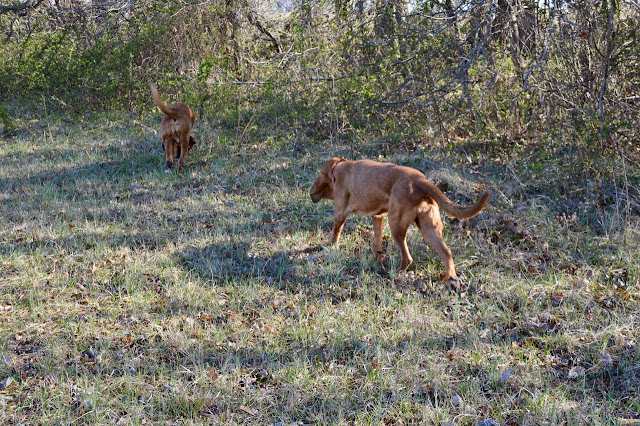 It's so nice out this morning neither one was ready to head back to the house. We took our time, no rush and the weather was great at not quite 50°. 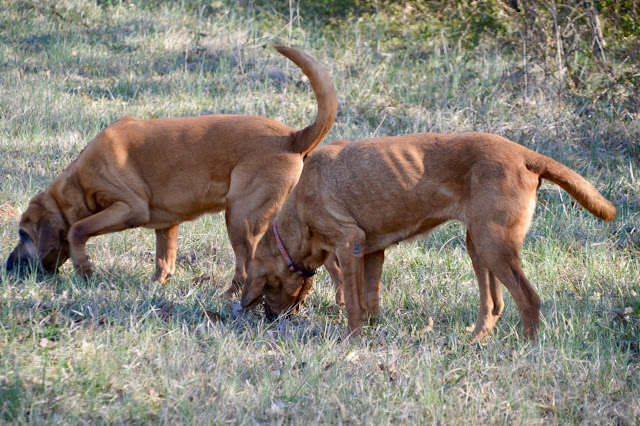 Stella decided to walk even slower toward the end of her walk. She didn't stop anywhere this morning but it took her forever to get back to the house. One slow step at a time. 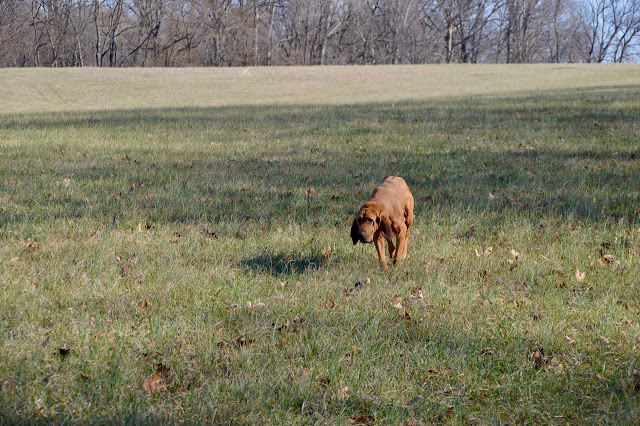 Sadie saw three birds up ahead and took off sprinting while I was photographing Stella. The birds didn't stay around long and Sadie's sprint ended up being pretty short. You can see how fast the brush is turning green. Spring is trying to get here. 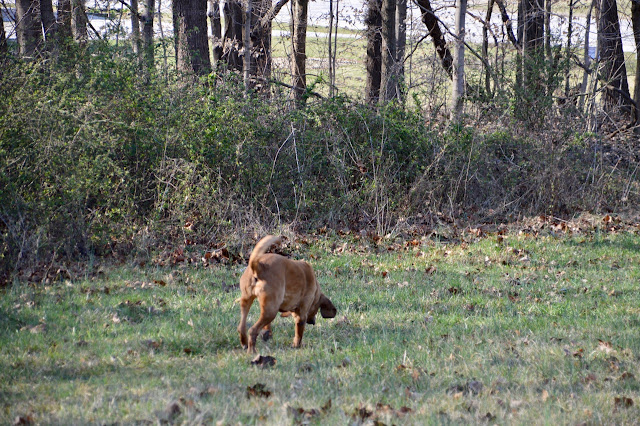 This next picture is for Tom. We were discussing the house being at the bottom of this field and the effect of underground water, a post from the other day. Tom ... this is the point where all of the underground water from the field heads. It's just in front of the burn pile on the left.

To add to the formula of erosion, 70 some years ago there was a road that went down into the woods going in front of that post. it went from the driveway out to the country road just a little south of me.

That road connected to my driveway and was a way for my dad's family to get their farm equipment up into the field I walk every day. For years the previous owners of the house would have to refill this area with dump trucks full of dirt or stone because it would wash out over the winter.

I stopped most of it when I found someone that could deliver something called 'mine dust'. It blocked a lot of the water, stayed firm and you could still grow grass over the top of it. 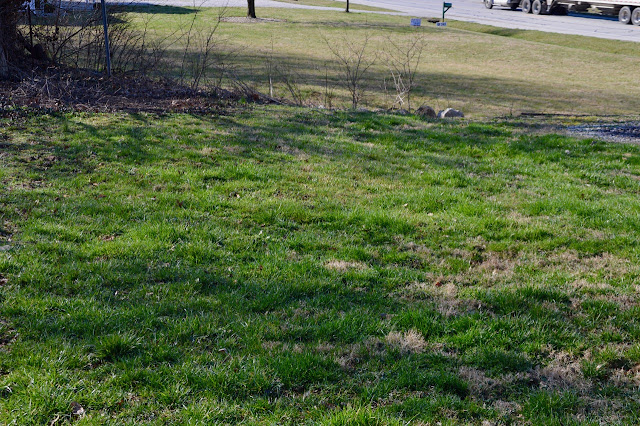 On my Wordpress blog I have found someone that has a Basset Hound and a Pyrenees. Her Pyrenees had skin issues similar to Heidi's. They found the food that worked was Rachael Ray's Only 6. They also found eliminating grain free food that had pea starch in it helped. They also added a probiotic supplement and coconut oil to her food two times per week.

I have tried the probiotic supplement for over a year. A lot of the grain free food Heidi was eating had pea starch in it. I tried the coconut oil on her food but was adding it every day a couple of years ago. I have not tried the "Only 6" dog food. I am going to try that with Heidi and see if that is the magic solution. They said their Pyrenees skin problems saw results with the food change in a weeks time after they had spent time just like I did, trying to find what was the cause.

The problem is I like adding a lot of pictures to each post and if I waited to make just on long blog post, I'd have over 40 pictures on that post. I usually take over a 100 per day and choose which ones after I edit them. I like to keep the pictures in a fairly close sequence and I find it hard to pass on enough of them to get it down to 10 pictures or so.

Like college football season, the hounds will get their afternoon walks and short breaks to relieve themselves during halftimes of all these basketball games I am going to watch. We also go outside or take a walk between games. They will always be the priority over any ballgame.

It doesn't look like I'll be able to squeeze in a Z4 ride today. I noticed some nice dried bloodhound drool from Stella on the rear corner of the car this morning as I walked by. Stella evidently had been checking out for any possible way for her to get inside the car and go for a ride.

Another week has passed here in 'the tropics' of southern Indiana.
at March 09, 2017