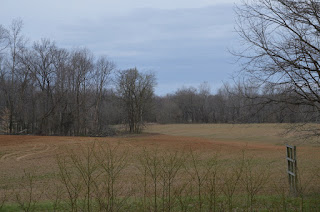 It's been a couple of days since I mentioned the idea about changing this blog's theme (template) to one of the new Blogger themes they recently announced.

They are all nice and well designed. It was like the people that designed them took a leave of absence from Wordpress and contracted out some work for Blogger. That is not true about leaving Wordpress, I am only using that as an example to show how similar they are with Wordpress templates.

Even with my nightly consumption of NCAA College Basketball Thursdays thru Sunday night ... I still have had time to look at the new themes, to changed their fonts, colors, add gadgets and see what this blog would look like with the new designs.

Off topic ... We saw our first Robin of the year this morning. I was surprised that Sadie did not chase after it when she glanced over. Also last night while I was sitting on the couch watching the first basketball game, a male Cardinal was sitting just outside the window, looking inside to see how I was doing. I didn't have a camera around to take a picture of him but I hope to see him again soon. 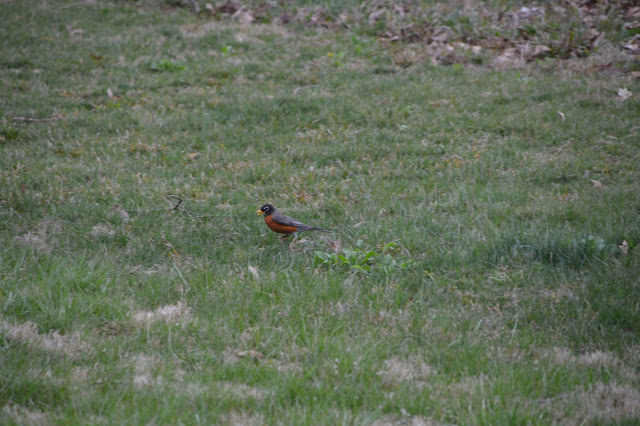 One of the reasons I was thinking about changing themes, was the option they had where the main page of the blog, lists a list of posts in order, each with a short summary and a "read more" link. I cannot be sure but it might cut down on the amount of data used when someone opens the blog. It also might load faster on your phone or tablets. 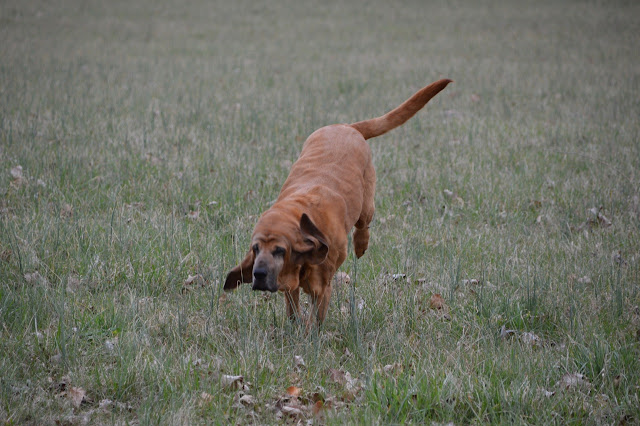 All the new themes had a lot of nice features. If I were starting a new blog I would probably use one of them. After uploading everything this blog has into the new blog I set up so I could look at different themes ... I came to the conclusion this morning around 3:00 am that I didn't see anything that would make me want to change. There were always one or two things I didn't like about the new design.

It's always a possibility later but a lot of the things I see readers using here would be different and harder to find on the new themes. Those things on the sidebars that did show up okay on the new themes, did not look as good since I was changing the default design of the blog.

The hounds were more than happy to keep their blog the way it was. Although they were more interested in getting their first walk of the day. A small chance of rain around mid-afternoon but at least it was 65° when we stepped outside. I don't mind the overcast skies as long as it is warm. 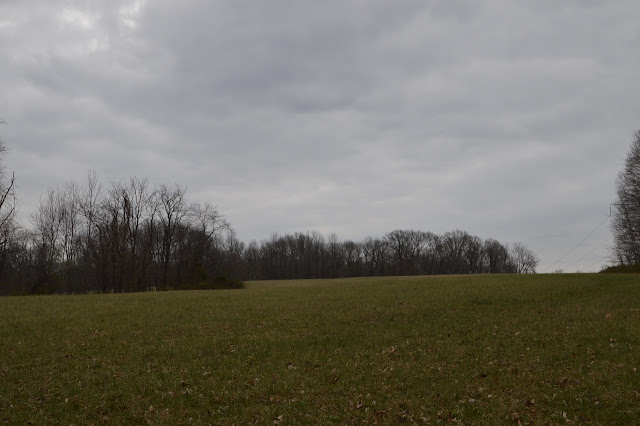 I had decided before starting this walk that I was going to give Stella total freedom. I wanted to see what she would do, with hopes that she would keep up with me and Sadie. 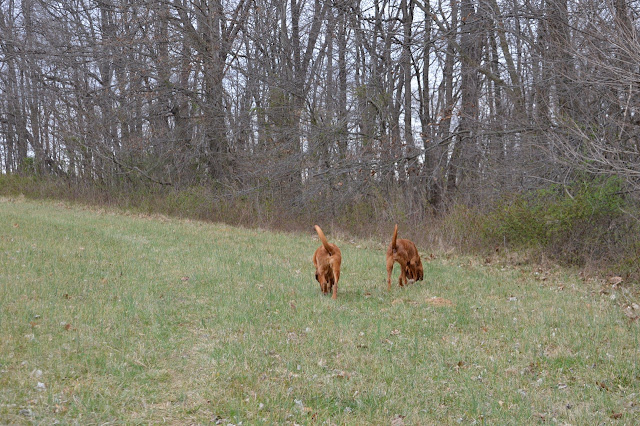 Back to the blog topic, I am going to keep it to one blog post per page. A few people have told me it uses less data with only one post per page instead of multiple posts. I am sure the number of pictures I include is a factor in data usage. 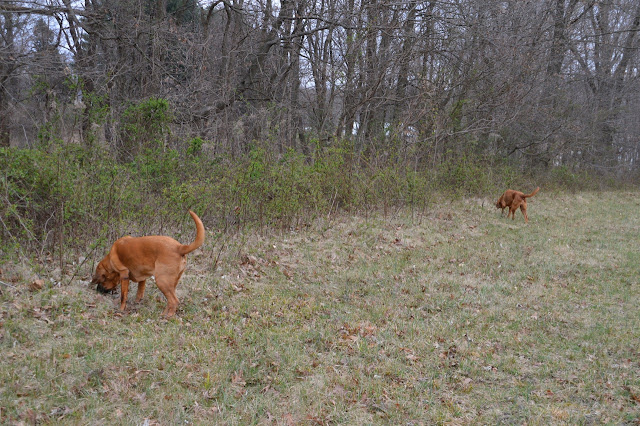 For the few people that have told me they like the option of showing multiple posts with a 'read more' option like the Wordpress blogs have, I guess I can only suggest looking on the right sidebar under the listed Blog Archives to read past blog posts. That would be the only options for those readers that do not stop by every day and might miss past posts of the week or month. Also the daily readers might find that to work okay. I hope so. 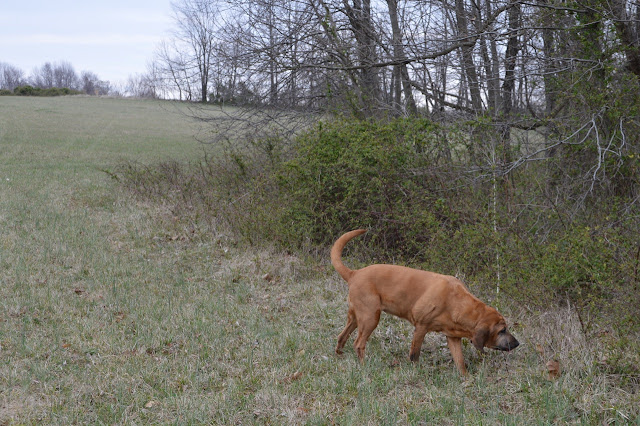 I was pretty sure when I took this next picture that Stella was telling me 'thanks but no thanks' and that she had other plans today on the walk. Sadie and I turned the first corner ... I hoped that Stella would not end up back in the neighbor's drainage ditch. 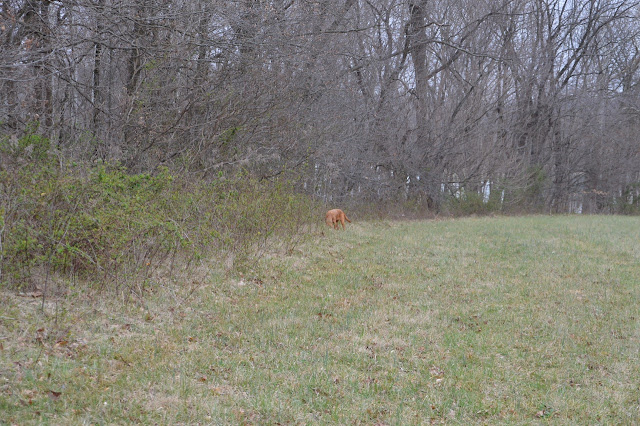 As we walked the sounds of all the different birds talking was loud. It was like they had came from nowhere since the weather was warmer. The sounds did not bother Sadie, as usual she had plenty of scents to check out. 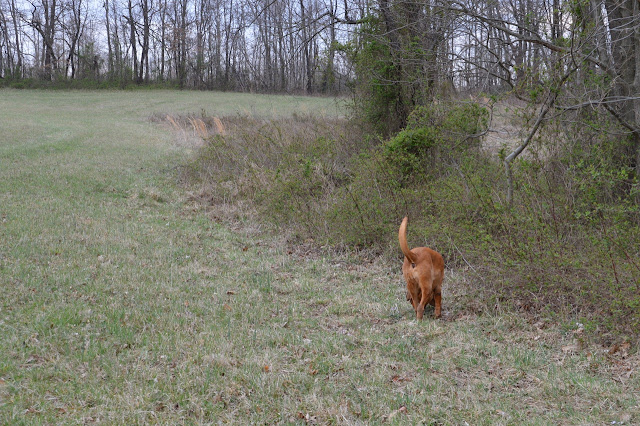 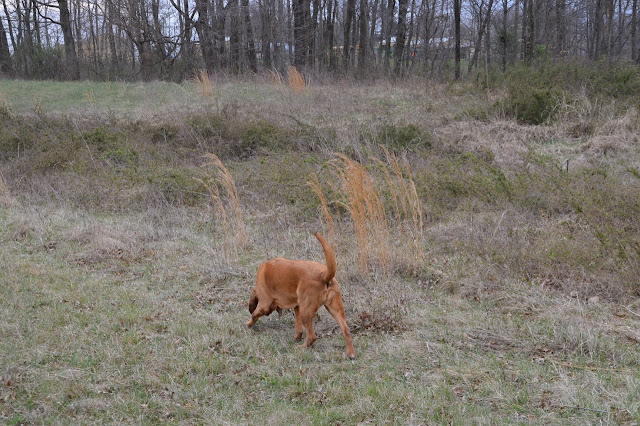 As I turned and did not see Stella, I picked my pace up. I was anxious to get to the final turn of the walk since I was pretty sure Stella was going to end up next door. She might be near the wooded area but also their drainage ditch was a possibility. Sadie lagged behind a little and then sprinted to me as she normally does. 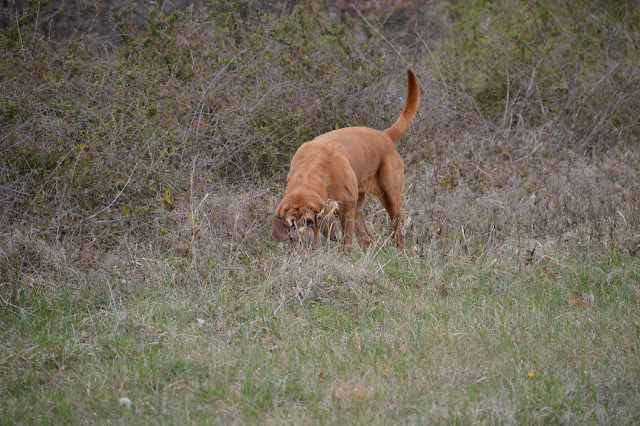 After I made that final turn I didn't see Stella anywhere on the horizon while I looked through my zoom lens set at 200mm. I did not see her anywhere. I was sure she was back in either the neighbor's backyard or down in the drainage ditch again. I didn't run but I was now walking as fast as I could.

Then while scanning the horizon I picked up something kind of rust color ... it moved ... she was near the woods but on the opposite side of them, a distance furthest from my house. 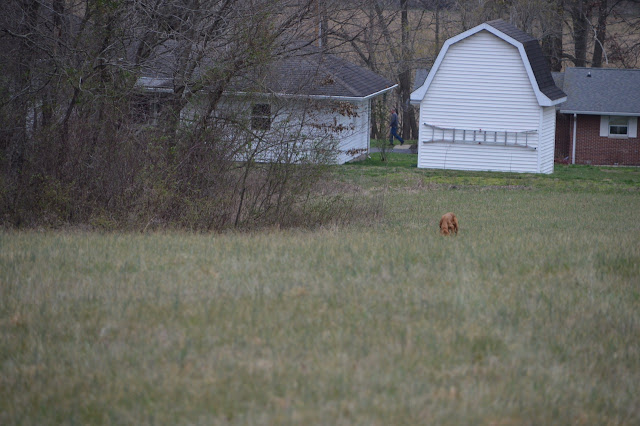 When I yelled her name, she did her normal stare right at me and then went back to what she was doing. One funny thing in his picture and the one above ... the brick house looks like it is so close to the white house but is actually down the hill and across the highway a good distance away. 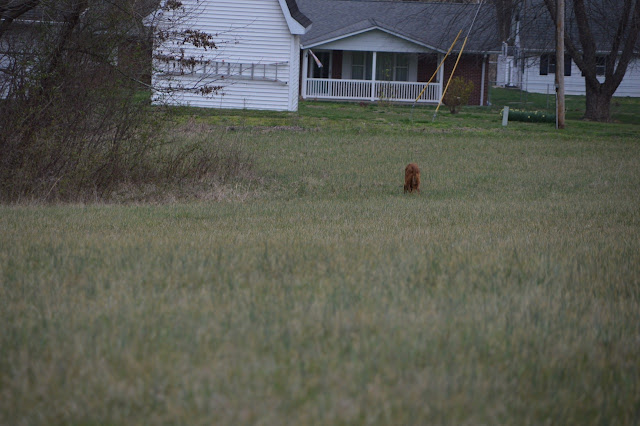 As I walked calling her name and getting closer ... Stella turned and started her slow walk to Sadie and I. She looked about as sad as a hound could/can look ... almost like she had lost her best friend. What I wouldn't do to know what she is thinking when she looks like that. 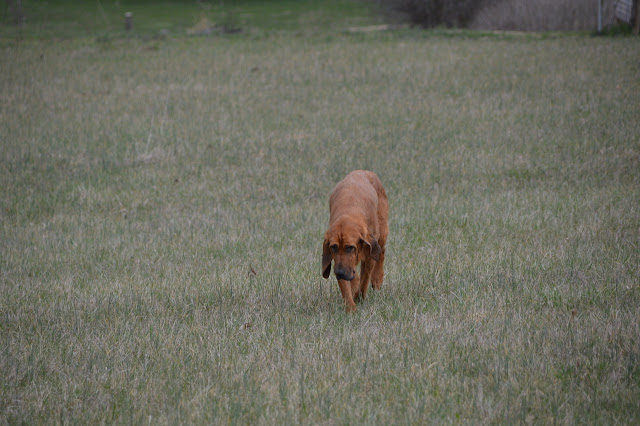 Sadie made her mad dash to Stella, touched noses, turned and got her to trot toward us on the path. That didn't mean that Stella was going to increase her walking pace ... it just meant she was on the path home. 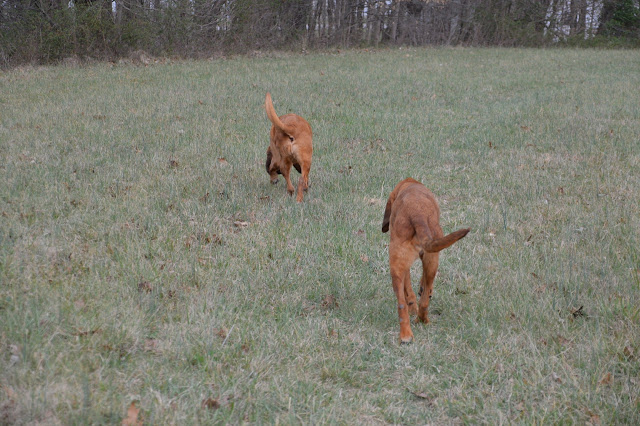 There is always something to check out before they get home. They never run out of scents to smell. 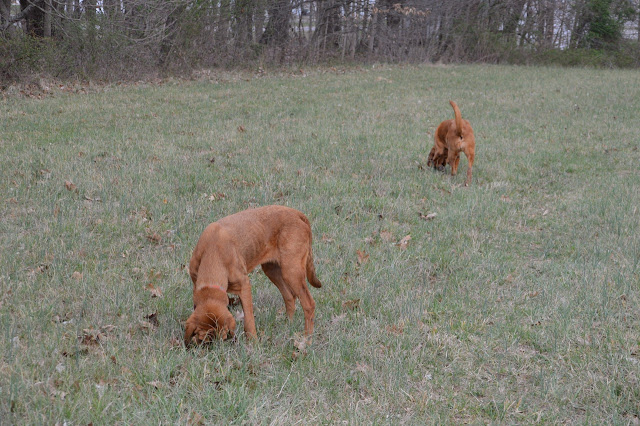 At least Stella continued walking non-stop after Sadie and I returned home. She wasn't fast but she was steady. 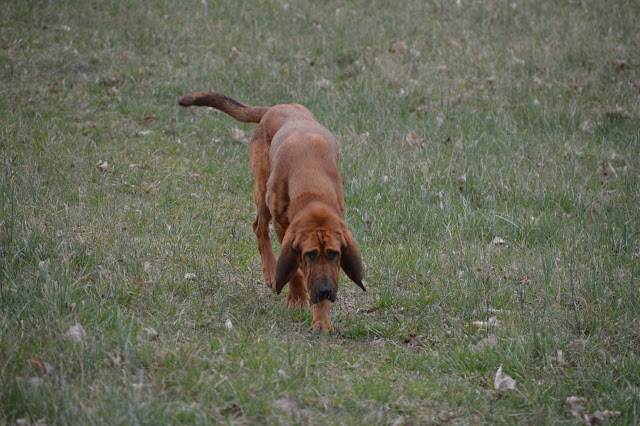 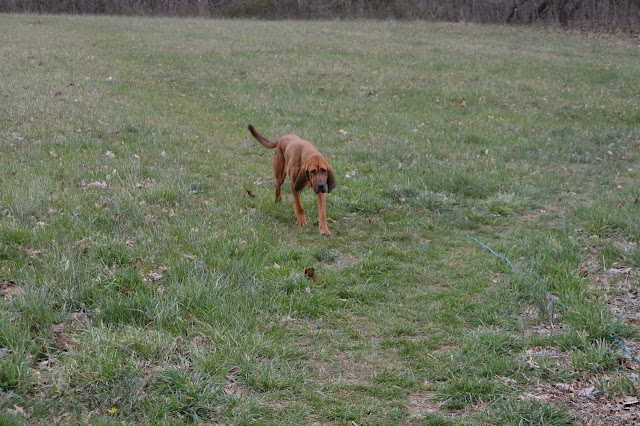 With my first game not starting until 6pm tonight and with the skies overcast I am going to pull out the ladder and get up on my roof to check the gutters and pick up the small limbs that have blown on the roof. I'll take my camera with me and try to post some rooftop shots later this afternoon or on tomorrows blog post. I always enjoy sitting on the roof to get a different view of the neighborhood.

I have quite a few new limbs to pick up in the yard also ... so after their lunch  of kibble, all three hounds and I will be spending most of the day outside enjoying the nice weather ... unless that rain shows up. So far Heidi is still in her winter routine, not realizing how warm it is outside.

If you have read this far ... I posted all of these pictures today without any editing. Can you see any differences?

My internal clock must have calibrated itself last night because it feels like a Saturday here in 'the tropics' today of southern Indiana.
at March 25, 2017