Hounds Have Been Busy 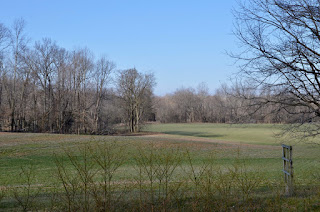 These past few days, when our "March Madness" marathon starts every day at 12:10pm and goes until after midnight ... there is not enough time in the day to blog.

That's where we have been.

For those that are unfamiliar with the term "March Madness", it is the annual college basketball tournament and not about any kind of drastic weather changes here in the "tropics'. We have one more day of it today and will get a break in the action until next Thursday night that will go through Sunday with only a couple of games per day.

In fact I am writing this post today during commercials of the ballgame. In the 2-3 hour window to get fed, shower, walk the hounds and fed them ... there hasn't been a lot of time to edit photos and blog. In fact for the first time since buying my Nikon D3200 camera a year or so ago ... I didn't take a picture for 3 straight days. 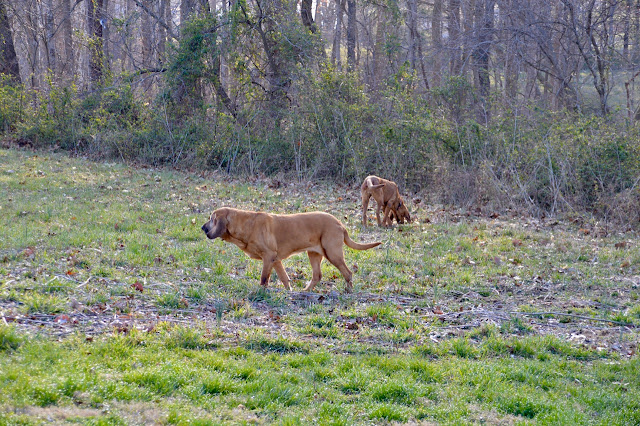 Before we get started about this morning and the pictures of the hounds during their morning walk this morning ... I will say that Stella started the week off bad. It was living proof why I cannot let her lag behind and do anything she wants when we walk. It also proved why I can't let her outside just to 'roam' the field.

During the Monday walk, Sadie and I are walking back toward the house and Stella is nowhere on the horizon. That is never a good sign. I figured she was either in the wooded area behind the neighbor's house or hopefully not in their front yard. By the time Sadie and I got closer to home there she was, she was where she cannot be ... ever. 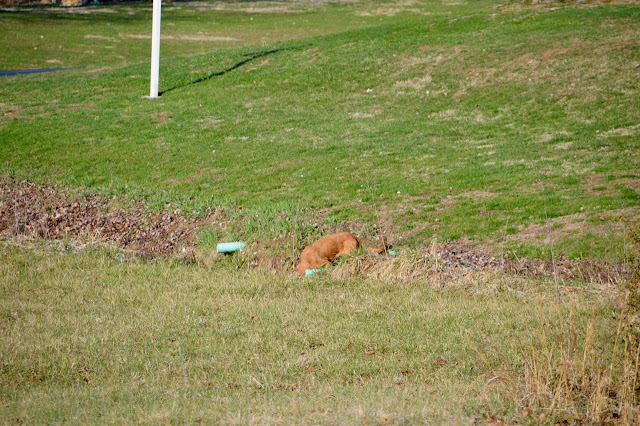 That leads to the highway and has enough scents in that ditch to lead her right to trouble if she chose to go that direction. As I approached calling her name, I was happy to see that as she climbed out of the ditch her legs were clean. I found out later her two left paws were not and it was good that she did not mind having her feet washed in the bathroom tub ... she hopped right in. 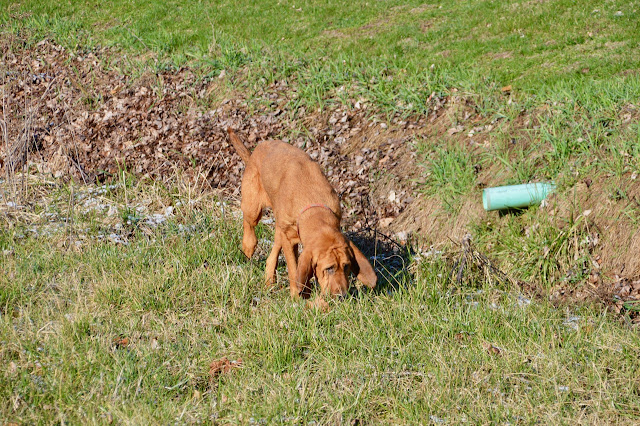 Little did I know that was on the start of Murphy's Monday ... as in Murphy's Law. With basketball games on the planned schedule, starting Tuesday night ... if things were going to go wrong, break or otherwise ... Monday was the perfect day for it.

Later that afternoon the washer decided it would rinse but refused to spin enough to drain the water from all the clothes. I hate doing laundry anyway let alone hand wring each piece of soaked clothes before putting them in the dryer. 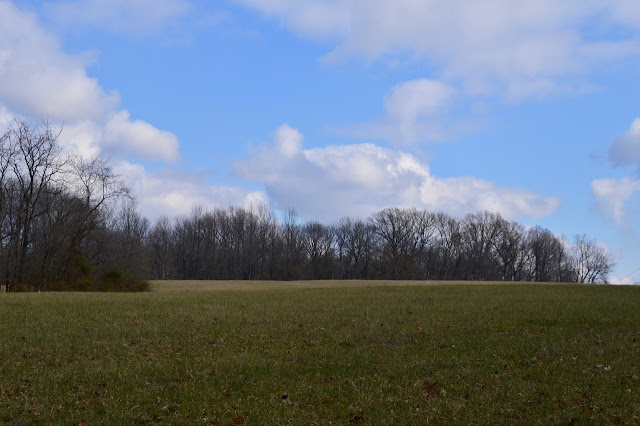 By Monday night "Murphy" still wasn't done and let me know just who really is in charge living here. While I was on the computer my two large Apple monitors went 'white' and nothing moved. It is the first time since I bought the iMac in October 2010 that the computer had ever acted weird on its own.

The other time was strictly my fault a few years ago when I tried to activate a program to encrypt the hard drive and found out later my model and date of build just missed the cutoff for it to work.

I thought Murphy had left on Tuesday, it seemed like a normal day. I found out during the ballgame that night he decided it was time to send me over the edge of insanity.

When you have one large tv screen, with four different channels showing four different ballgames at the same time and needs to work no later than Thursday night ... the Directv REMOTE CONTROL is the most important thing of my life right now. So as I was starting to watch a game on Tuesday night a couple of days before the marathon was to start, Murphy decided to take out the signal between the remote and DVR to change channels, or adjust volume.

I exchanged the batteries for brand new ones. No luck. Even though I reprogrammed the remote a few days before, I tried it again. No change. It wasn't long before I was on the phone with Directv to have them send me a new replacement. I begged and offered to pay for 'Next Day Delivery' but was told that was not possible. All she could do was process the order.

It arrived the next afternoon just in time for the basketball marathon.

Stella decided that this week she would try to be as stubborn as possible to also remind me that when 'Murphy' isn't around, that she is in control of the household. It wasn't just being stubborn but nothing was good enough for her. Clean water, she needed different water. Go outside, but she wanted inside ... then once back inside her nose would tap the door handle telling me she wanted back outside. A few walks required her to be on the 25' retractable leash. 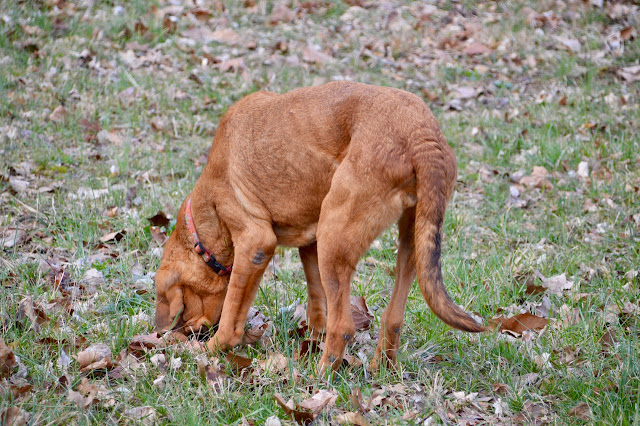 With the weather feeling warmer and weeks of warmer weather on the way, we have been able to fit our walks in the tight schedule of ballgames. They haven't missed a meal nor a nap. Heidi has moved her sleeping bag to the couch between me and Stella and only comes up for air when she smells food. 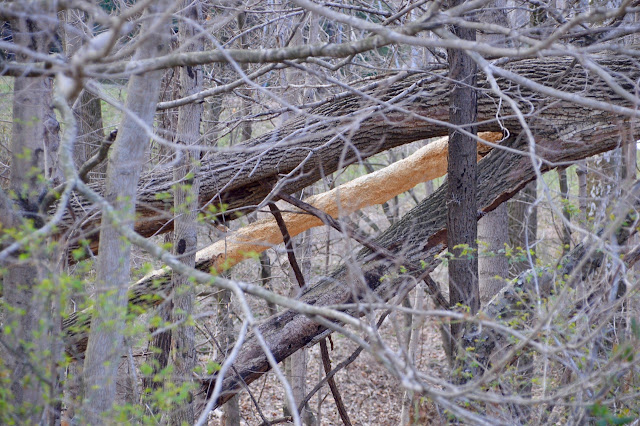 The tree limb continues to get smaller little by little. I doubt if it will ever get to the point of breaking in two but there seems to be a lot of good food their for something.

This next picture is the summary of Stella's walks this week. She lags behind, ignores any calls of her name, walks in different directions after looking right at me. Monday memories remind me I can either stand and wait for her or double back and coax her into coming with Sadie and I. 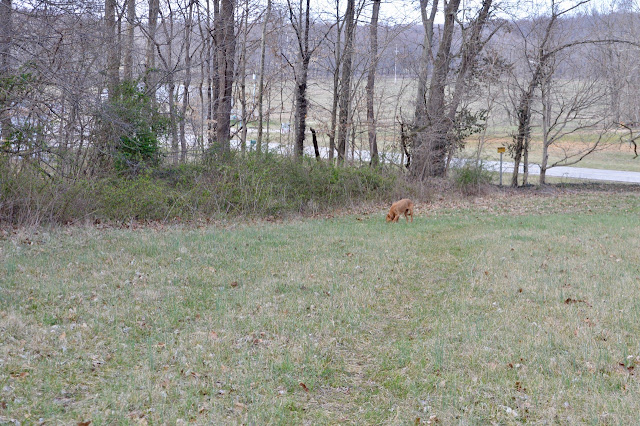 Sadie in the meantime doesn't care what Stella does, she has scents to track, and places to go. 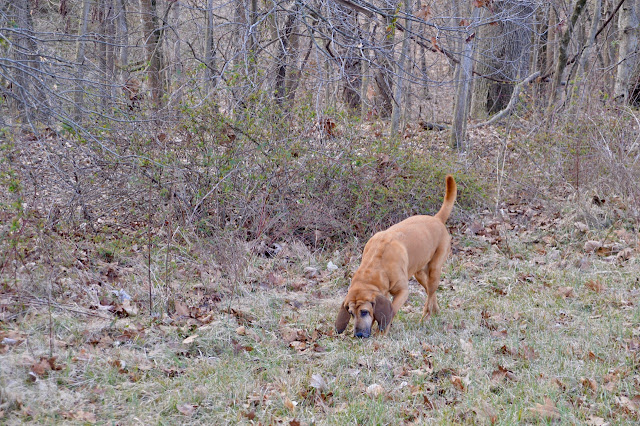 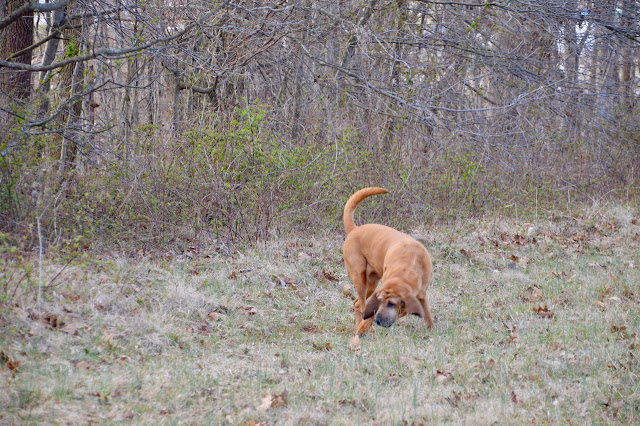 About the time I started to double back to pick up Stella ... she started running our direction. She rarely runs straight to us without a few interruptions in between. Obviously she does not care about time or how long it takes to complete the walk. 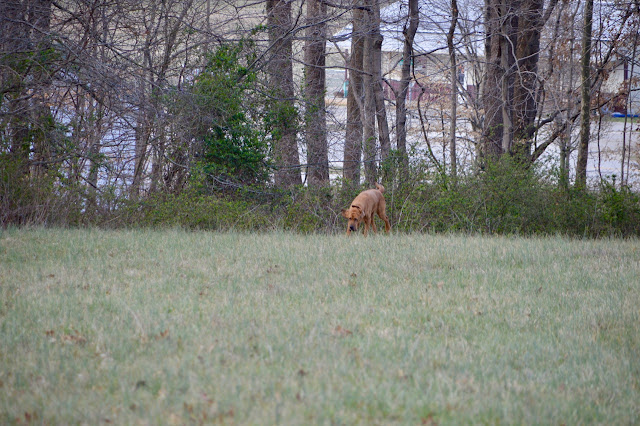 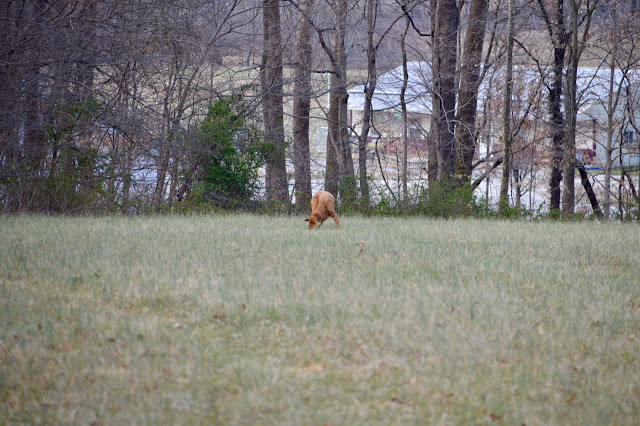 Sadie wasn't going to wait any longer and took off around the first turn. I had to go back and let Stella know we needed to keep going. I needed more coffee and some breakfast after the walk. That doesn't mean the pace needed to be picked up but it did mean she didn't have 30 minutes to investigate each spot she stopped at. 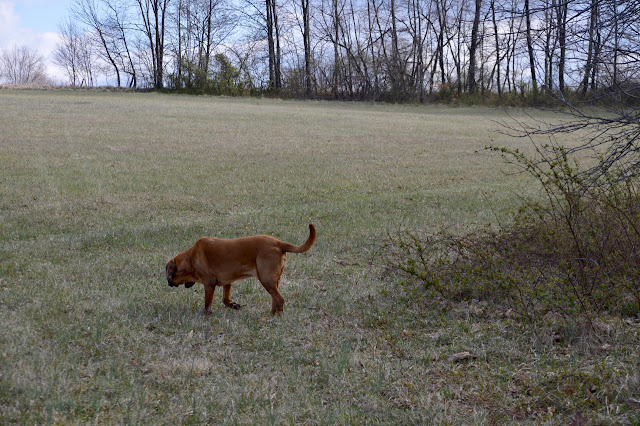 Even with the late breakfast kibble for the hounds they still like to be fed, let outside and back in before the first game of the say starts at 12:10pm. It's funny that after eating two meals only 3-4 hours apart, they never bother me again until the next morning for food. 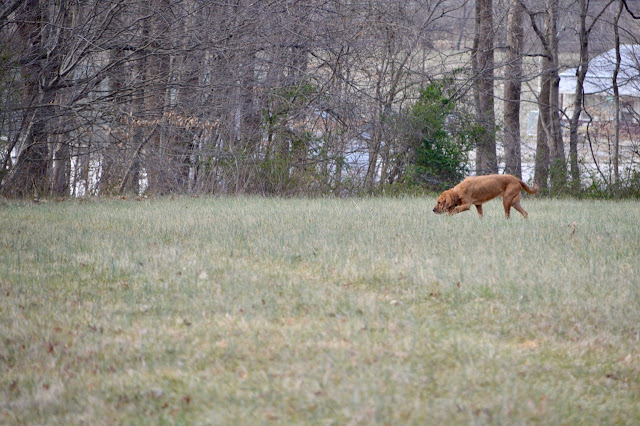 At this point, if I were to leave her to do what she wanted ... by the time Sadie and I were on our way back after the final turn home, she would be over by the neighbors. It's not a new routine that I am liking too much and I cannot wait for a week to ten days to pass when she dreams up a new routine. 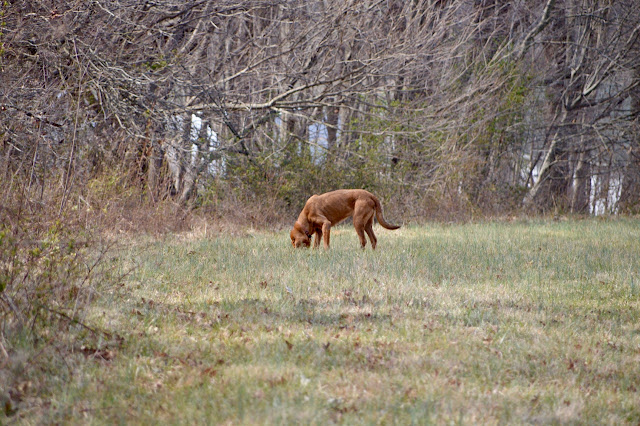 With Sadie fairly focused on her tracking, Stella is protesting my decision by walking in the slowest motion possible. At times it looks like she may not be able to bring that next paw forward in her stroll. I've never seen a hound walk as slow as she does. 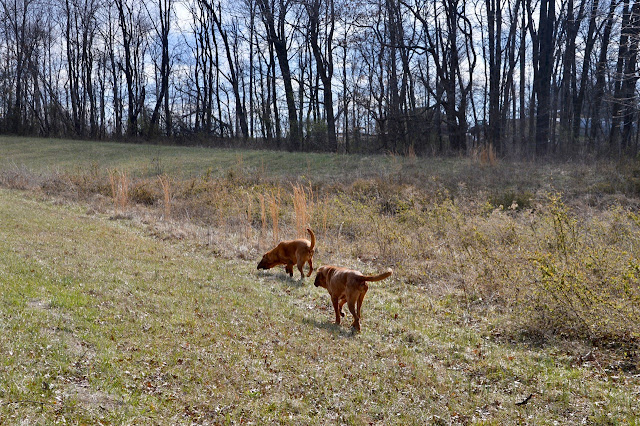 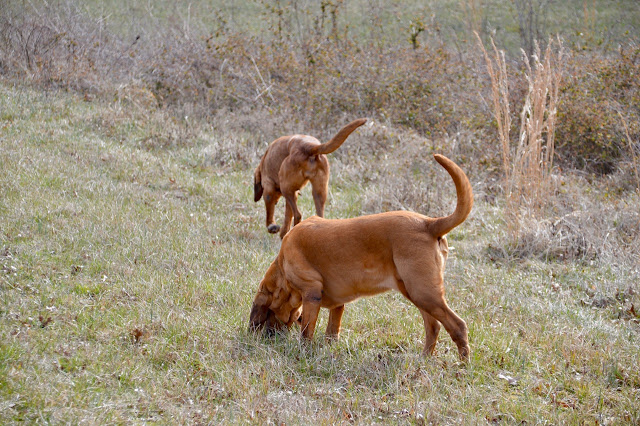 She thought she was headed for the far right corner but not this morning. I had stood around long enough waiting for her to catch up, before I doubled back to get her twice that by this time all I am wanting to do is finished the journey that was only suppose to be a daily walk, not a cross country trip. 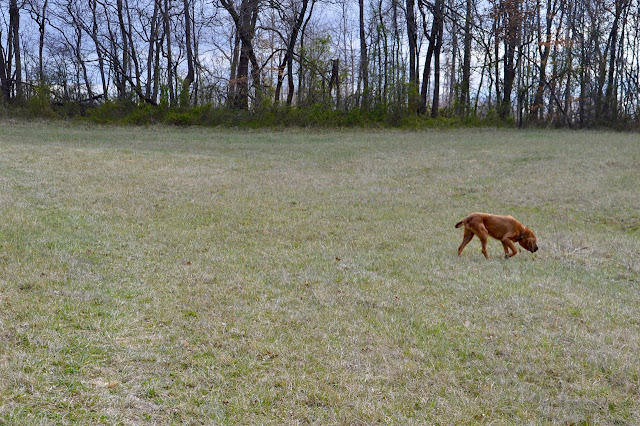 Sadie enjoys all parts of the field. 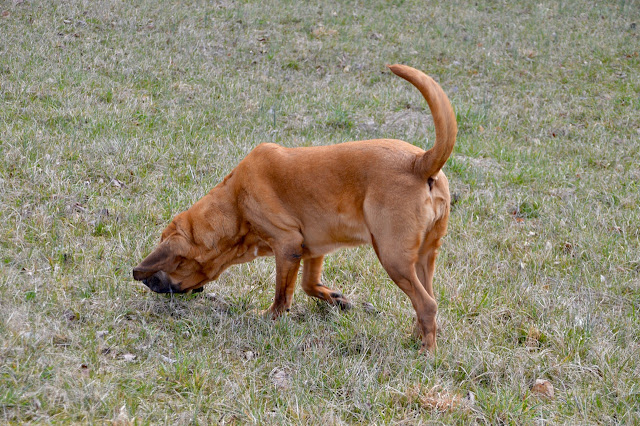 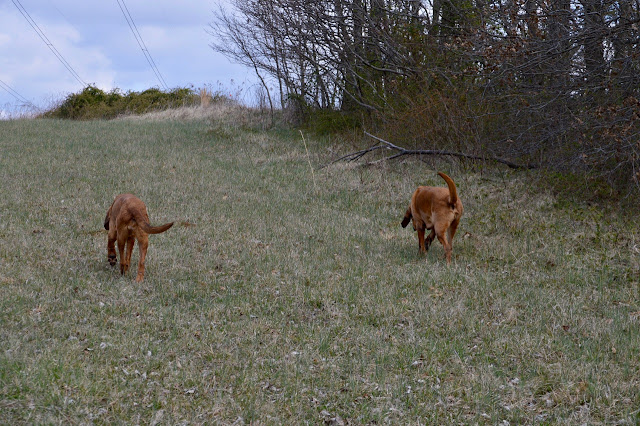 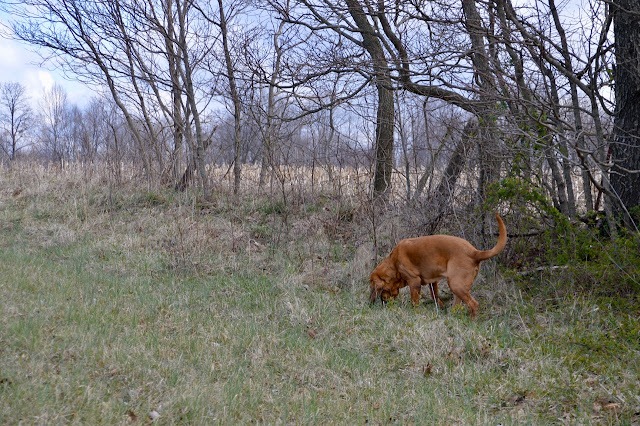 If you didn't know any better, you would swear that Stella is pouting as she walks. It's hard to tell with a bloodhound just how they are feeling because they normally look like every day is a bad day. 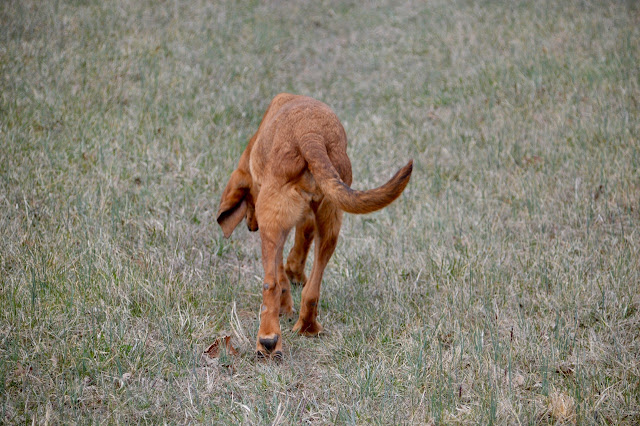 There is no bird that is safe if Sadie sees it on the ground. She has never caught one, so those quick sprints gives her a nice workout. 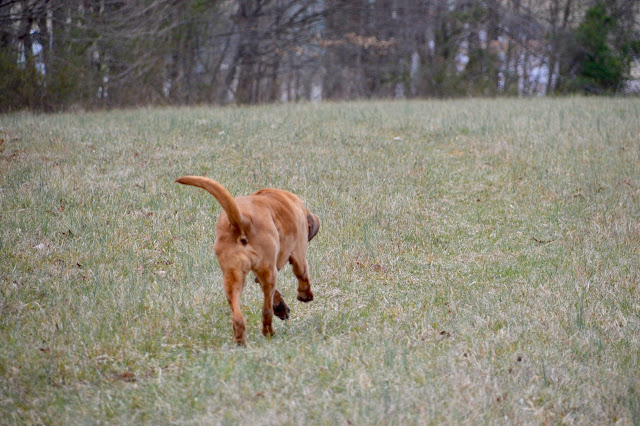 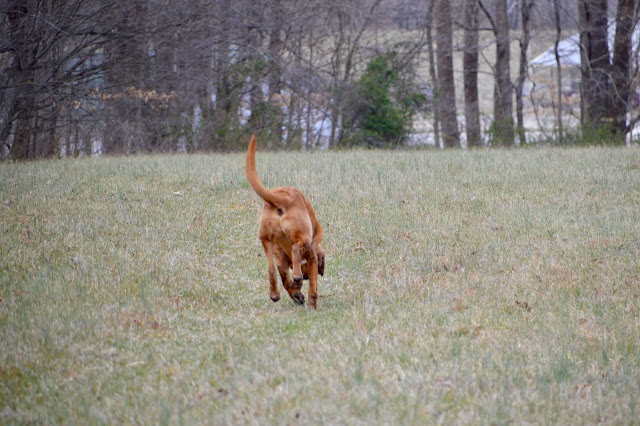 I am not sure what motivated Stella to get some running in but it was good to see. 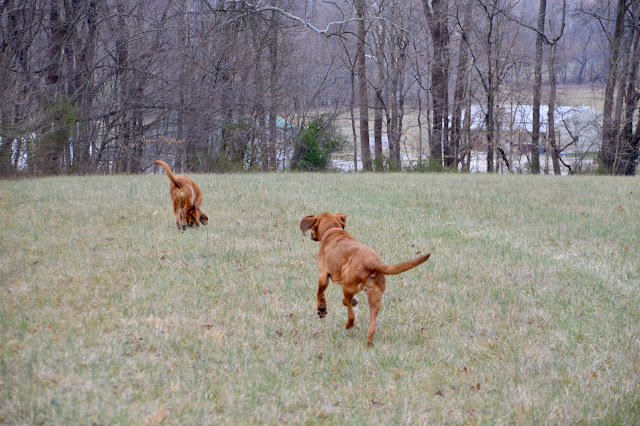 They slowly get back to the house and prepare for another 12 hours of college basketball. I am still looking for that dream of grocery delivery here in a rural area. Not enough food to last the day and not enough time to go shopping. 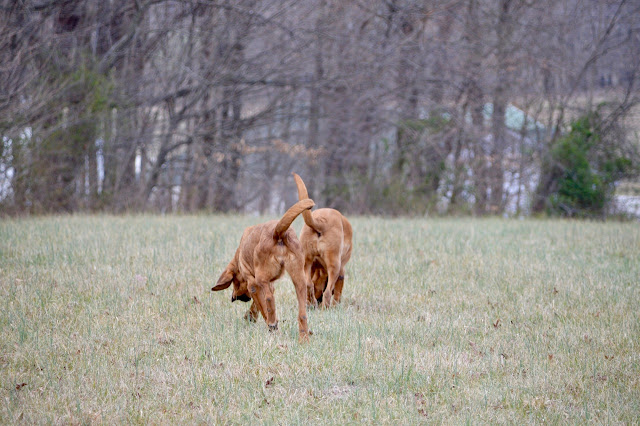 Spots of grass look tall enough to mow. I might whack those areas with the weed eater instead of bring out the mower for its first time of the year. There isn't that much to mow but a couple of bad spots. 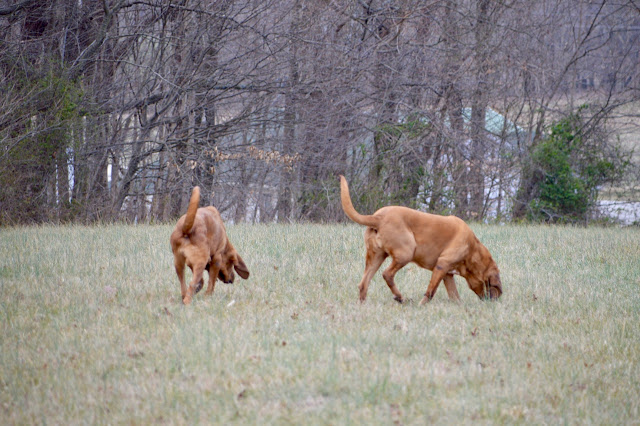 The worst thing about all of these games are the commercials. Great food commercials and everybody can afford a new $65,000 truck. It's no wonder obesity and personal debt are problems in our country. Speaking of something outside of basketball, I have no idea what is happening in the world as far as news.

It has been nothing but sports, coaching changes, college basketball and spring training in major league baseball. The regular season starts in 15 days and that will lead me into college football by the end of the summer.