Hounds Veg Out On Saturday 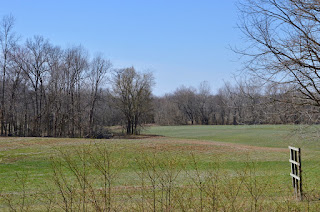 Due to a terrible night of sleep, I didn't start the day as earlier as normal. We were up and walked before any coffee was made.

Even with a late start, the first hound walk of the day was completed by 10:30am ... our first pictures were not taken until almost 1pm.

Heidi made it outside for a short trip after the lunch time kibble was served. Sadie and Stella wanted lunch at the normal time but didn't get it due to their late breakfast. 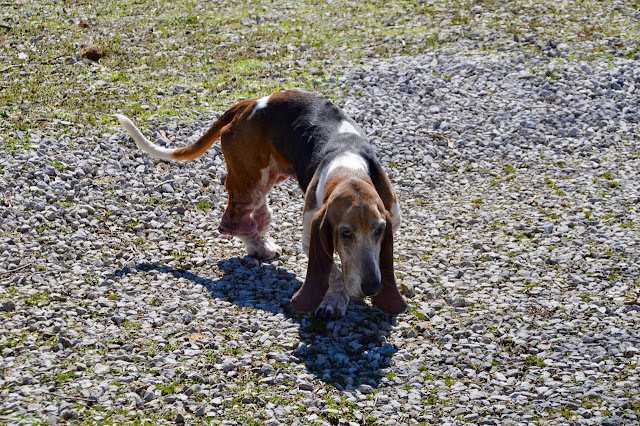 She still looks thin but it feels like she has gained a little weight. I noticed the other day looking at the different breeds of Basset Hounds, yes there are sub-breeds, that she looks like the smaller breed of bassets.

I would have to dig back through those websites to find the official name of the basset hound that she looks like. 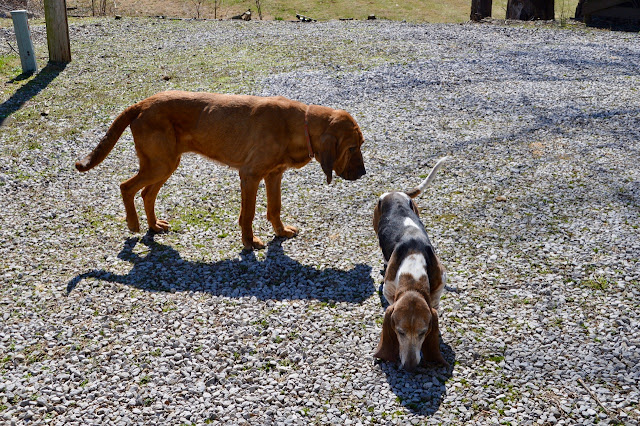 The ballgame I wanted to watch today started at 1pm. My couch is shorter than a normal couch but longer than a love seat. It sits me and two hounds comfortably ... when a third hound wants to get on the couch with us, it gets interesting.

Normally Sadie sits in her own chair, it's a large leather chair with an ottoman. Stella usually lays on the left side taking as much room as possible and then when she is not in bed, Heidi will lay next to me. 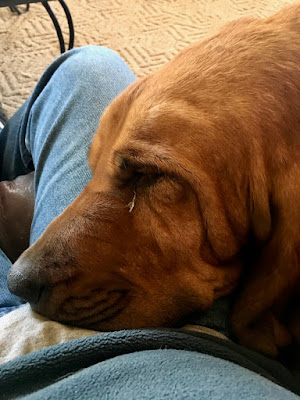 Today when Sadie jumped up in Stella's spot before anyone else sat down ... the puzzle was in danger of having problems.

Stella did her pouting stance where she will sit in front of the couch and lower her head and eyes toward the floor ... not moving a muscle ... until I decide to move something or someone.

Today I did not tell Sadie to get off the couch but I slide about 2" to my left and Stella thought that 2" of open space was enough room for her to squeeze in and then turn and force herself into a bigger spot on the couch. 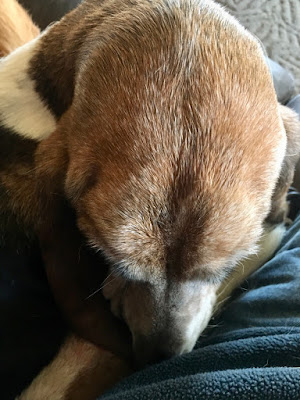 Heidi didn't move an inch during Stella forcing her way on the couch in a space about 2" wide. In fact she did not even wake up.

She slept through the whole game. 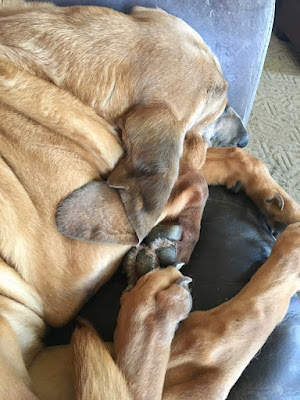 Sadie was totally unaware that Stella was trying to force herself onto the couch. She started snoring sometime in the first half of the college basketball game ... but did wake up long enough to eat her lunch at halftime of the game.

She didn't beg for a walk today and was more interested in sleeping.

More than likely all of this sleeping was caused by a late lunch, although they normally sleep during the same time every afternoon.

It was sometime close to 3pm that Sadie woke up and started acting like she wanted to go for a walk. Stella had woken up and nudged the door handle with her nose to go outside ... so it was time. I decided to take the camera with me on this walk along with the standard 6' leash.

This morning's walk was with only the 25' retractable leash. I was pretty sure by the time I stepped outside that Sadie and I would complete the walk without Stella. It was a gut feeling I had. I wasn't wrong about that and it didn't take much time to confirm my thoughts on what Stella would do. 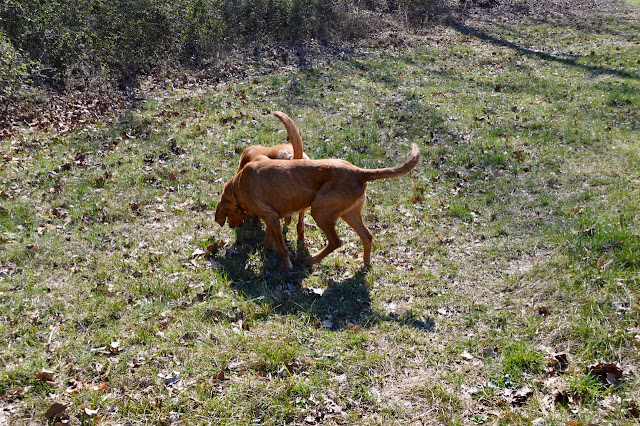 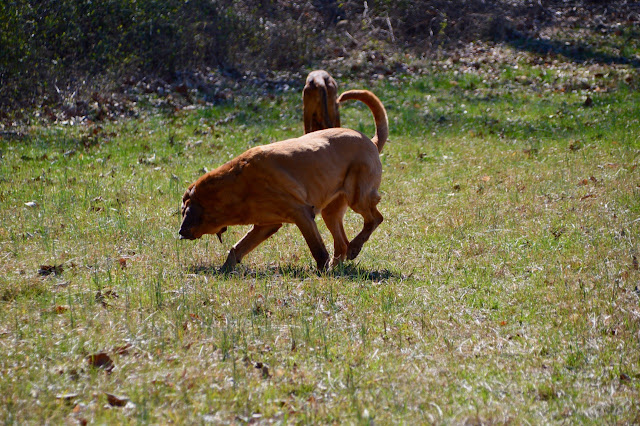 It was nice out today although it was cooler than predicated. There were zero clouds in the sky, cold enough for a ski cap, light gloves and a light jacket. Once again Sadie got some running in today, two or three different times during the walk. 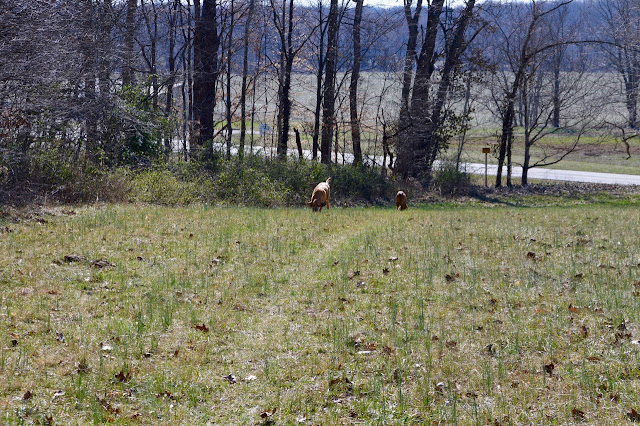 She loves going on these walks. I say that a lot but she does. It's her nose that keeps her focused and active. 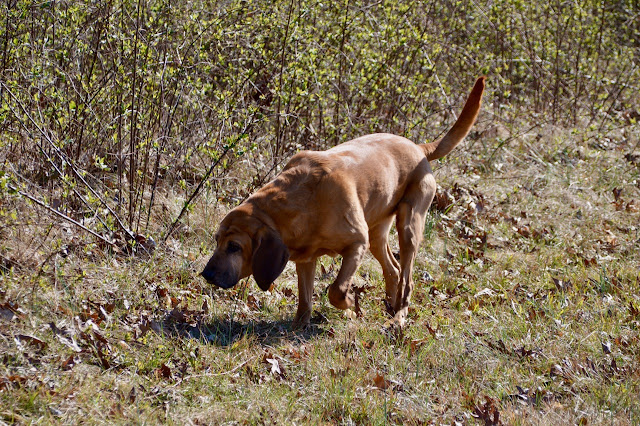 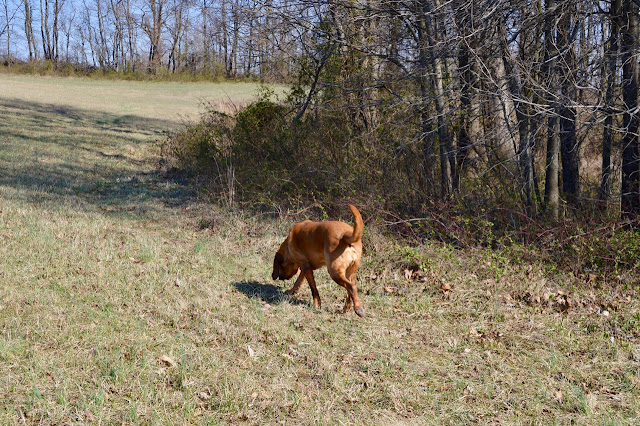 Glancing back I see that Stella has barely moved into view. Since she isn't trotting in our direction I can tell I'll probably find her in the middle of the field on the way back if not over by the wooded area. 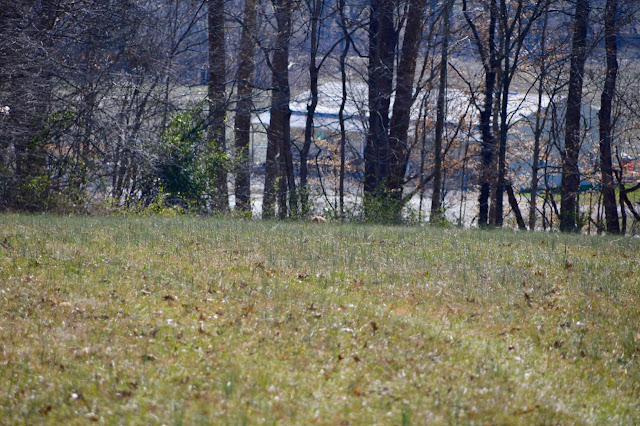 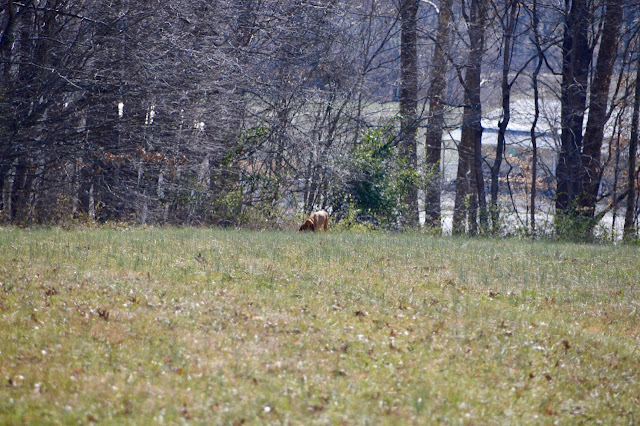 What would you do if you had a hound like this ?? 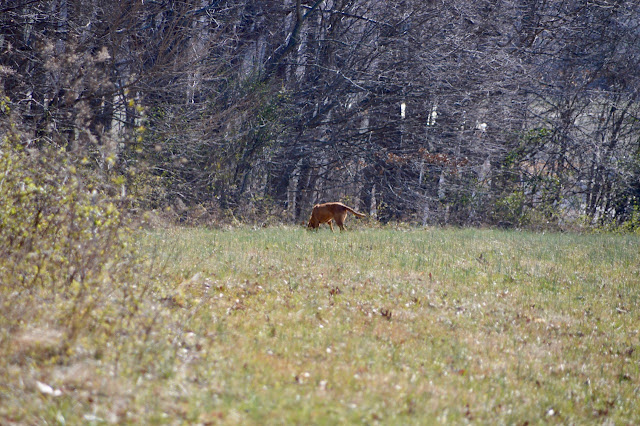 Sadie was almost positive that Stella was behind us or at least catching up to us ... I let her in on the bad news. 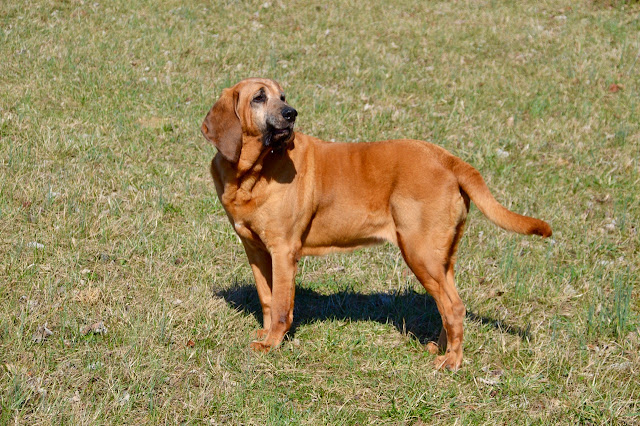 In fact Stella was seen going the opposite direction and something had caught her undivided attention to where she didn't even move from that one spot as Sadie and I walked the return path. 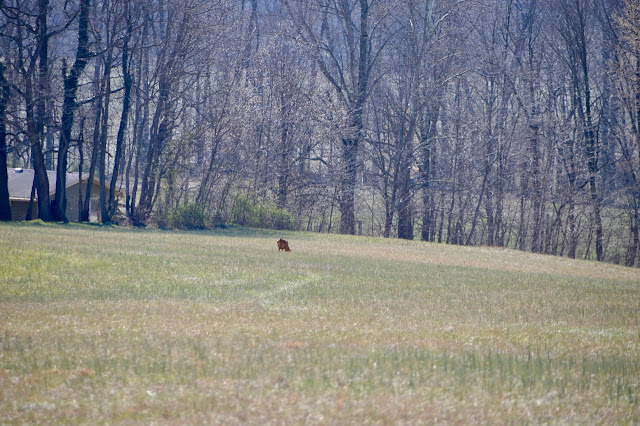 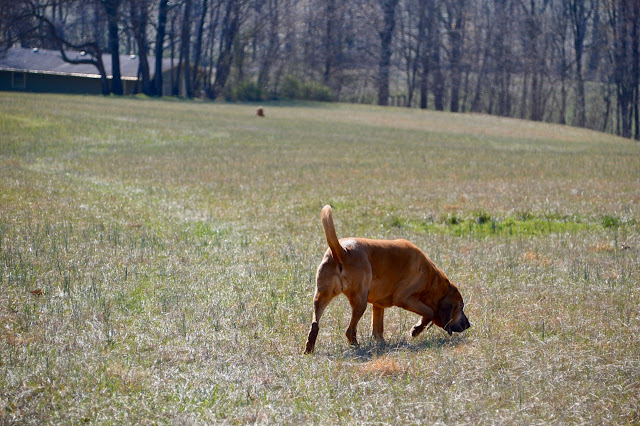 I called Stella's name one time to see what she would do. She heard me and then went right back to eating. 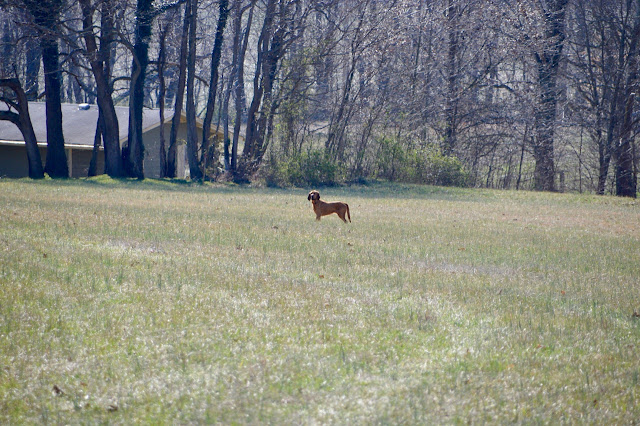 While I was taking the picture of Stella, Sadie had snuck off behind me and for some reason had gone over to the opposite side of the field. She acted as if she heard something in direction of the farm a couple of lots over. 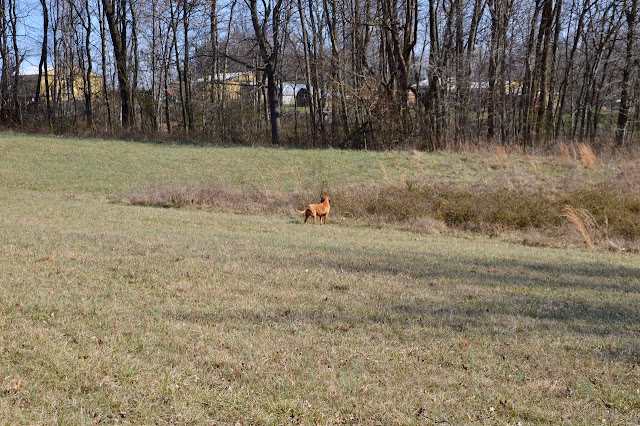 A zoomed picture of Stella, just to make sure she was still around. 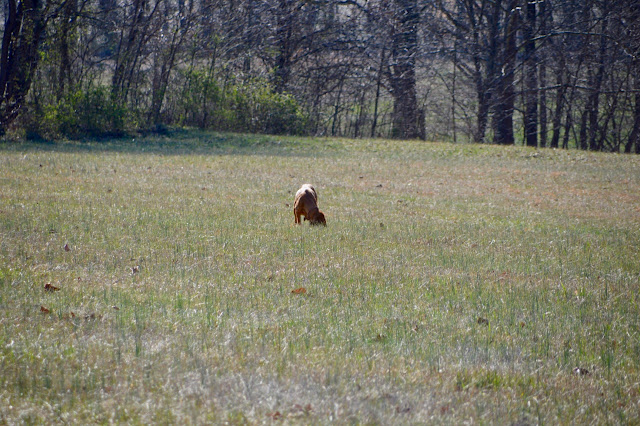 Once Sadie found out that Stella was up ahead she ran to let her know it was time to go and head back to the house. Whatever Stella had found, it was so good that Sadie couldn't pull herself away either. I had to walk over with the leash in hand to get Stella to move. 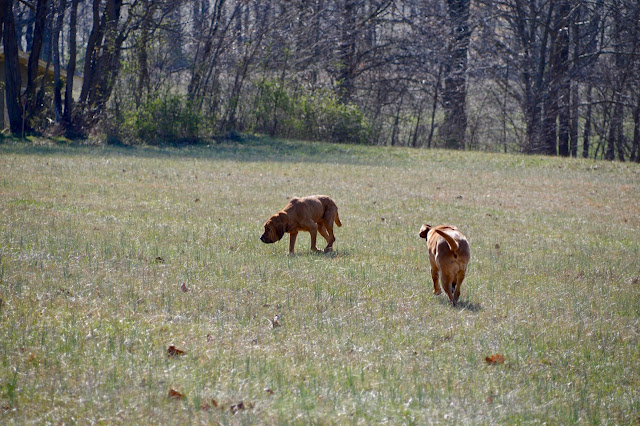 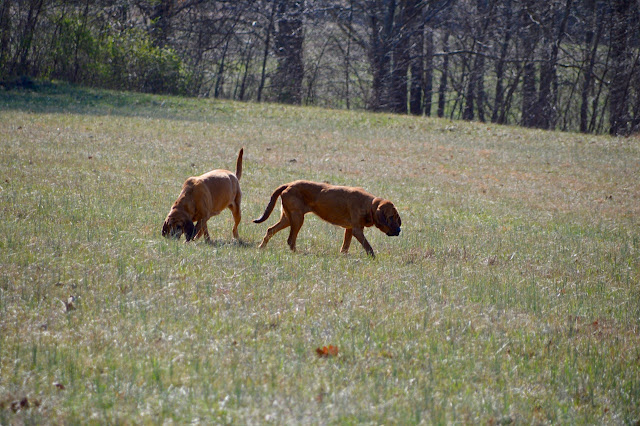 It wasn't ten SECONDS after getting back inside the house that both bloodhounds laid down and were sound to sleep, like the walk never happened. It's been a good Saturday today with enough daylight to get a Z4 drive in, with the top up. The next game I wanted to watch doesn't start until 8pm, so I will probably read a little until then.

I took the Mini Cooper Countryman out on the freeway yesterday for the first time. It drove as good as I thought it would. It was very comfortable and I could see making a trip out west in this car without any issues. I don't like to stop a lot when I am driving and the comfort of the seat confirmed I could do that in this car.

I had a couple of cars passing me but slowed down just slightly to the side of me to take a look at the "blacked out stealth" Mini. For the first time that I can remember, I didn't see any State Police on the freeway in either direction of my trip.

Warmer temps are here for at least another week in 'the tropics' of southern Indiana.
at March 04, 2017