The Hounds Don't See Everything 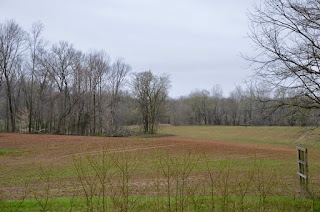 I was really sorry to hear that two online friends, fellow bloggers and hound owners had to make the hardest decision of all for their two daschunds. Hopefully their memories of all the great times they had with their dogs will get them through this period of sadness.

I can't say much was planned for today here for the hounds and I. Another week has flown by and in a way it's really hard to believe we are a day away from the month of April. Since I cannot find the steel 5" long hinge pin for my mower that I lost last November while mowing the yard for the last time of the year, I headed to the local hardware store.

I'd started by filling up a bag of free popcorn from their old style popcorn machine, walked around adding things to a future shopping list on my iPhone as I ate the popcorn. Just to make sure I headed toward their back shop where they repair any kind of lawn equipment. I thought there might be a chance they had the same pin in their stock for different mowers. I hope to mow the complete yard by next Wednesday before the rains show up.

With the weather last night I wasn't sure if a walk this morning was even a possibility. There was a lot of rain last night, still showing some spots of standing water, but after Sadie gave the field an early morning inspection she let me know the field was walkable. 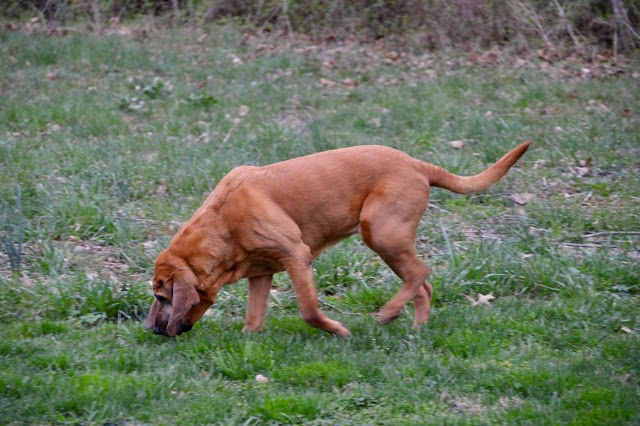 Cold at 50°, windy but with waterproof hiking boots and a jacket on, it was a nice time to walk. With the recent rains, things are really getting green again and growing fast. 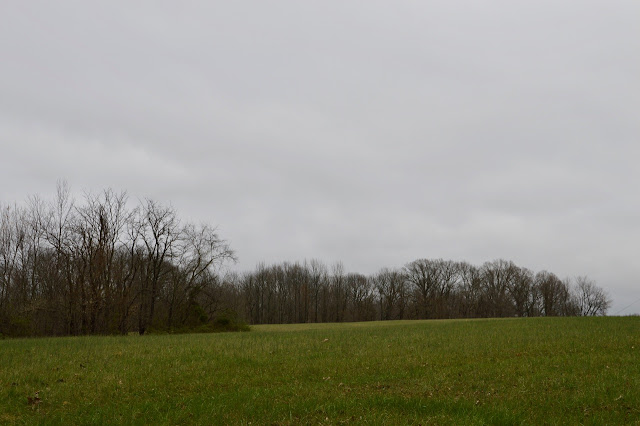 Surprise ... surprise ... look who is out near the front of the pack. Stella even ran a little bit today and didn't "mope" through the entire walk. 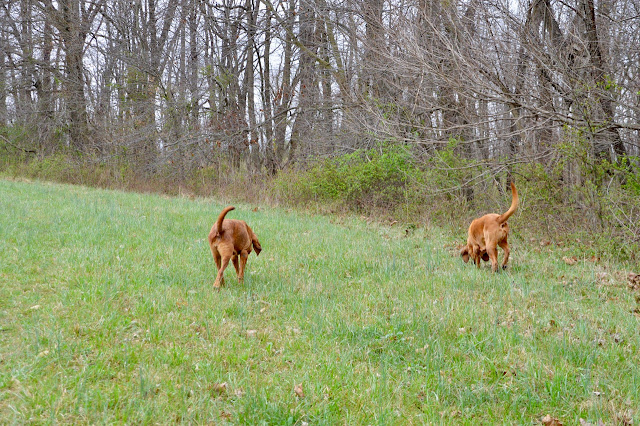 Anytime Stella veered off course or lagged behind, Sadie made sure that Stella got back on course. Running to get her wasn't needed today ... just that stare and some mental telepathy. 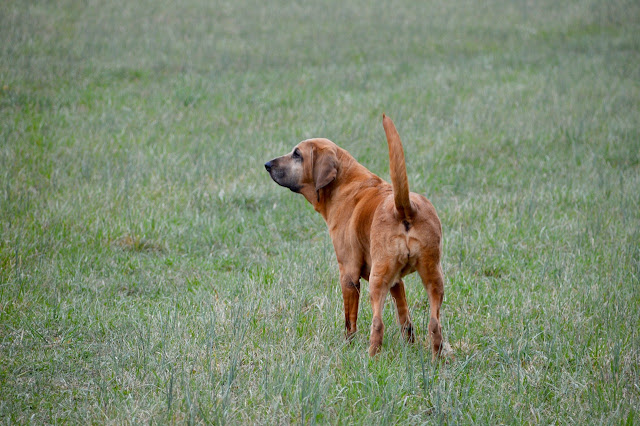 Without a word Stella moved back to Sadie's direction. 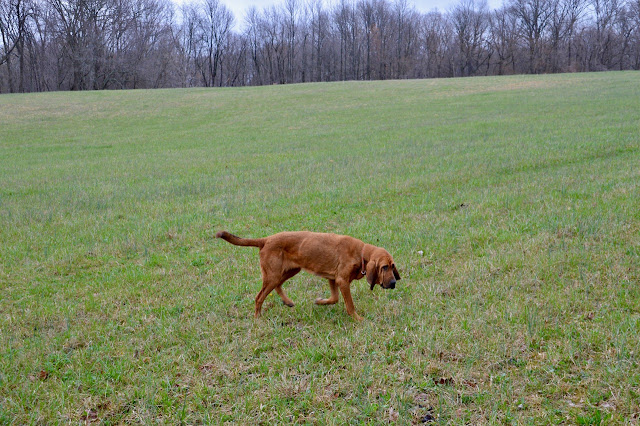 The deer scent was so strong today that both bloodhounds not only walked into the heavy bushes, but Sadie was almost ready to go down the embankment after them. She popped back out into the field when I yelled "No" but Stella still needed to check out a few things before she moved. 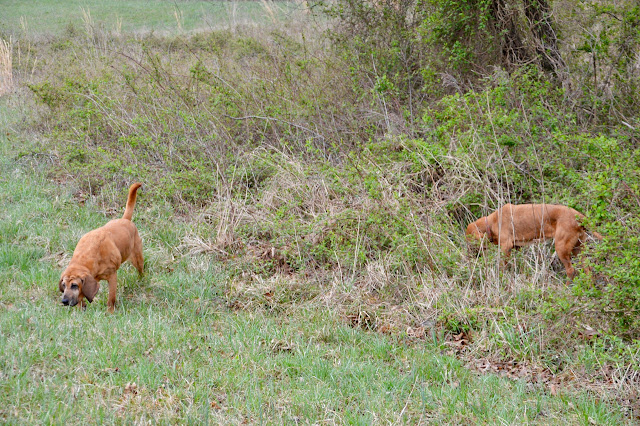 By their activity, once again I could tell just how much deer traffic there had been this morning. Yet, I was to find out later that deer scent would not be the most exciting thing on this walk. 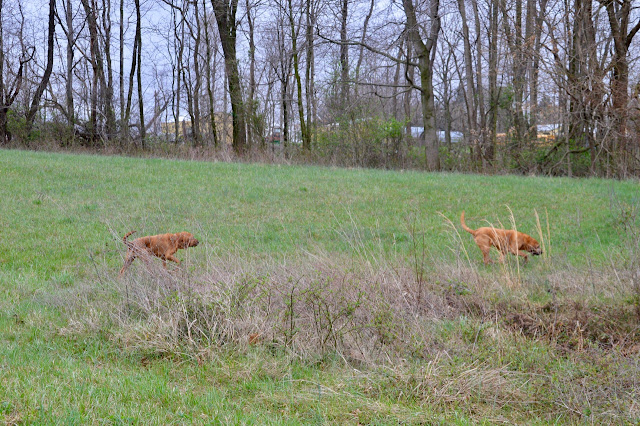 Sadie was on her fast pace along the edge of the field. I was keeping track of Stella to make sure she stayed to the left and not go right into the gully area. 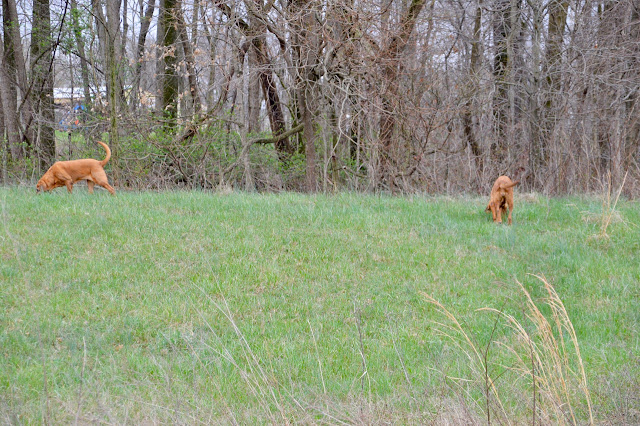 Very focused on what she is finding.

But Sadie still had time to tell Stella to get her ass in gear. 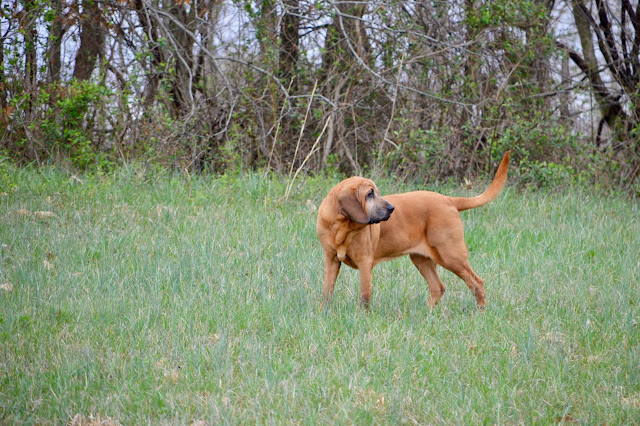 Then again ... Stella started to move and join Sadie on the walk without me saying a word. 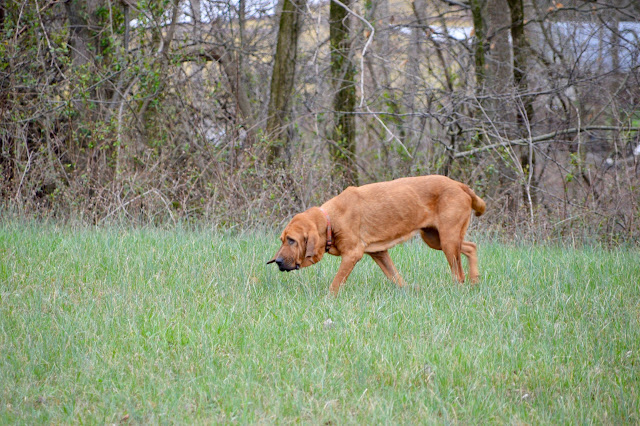 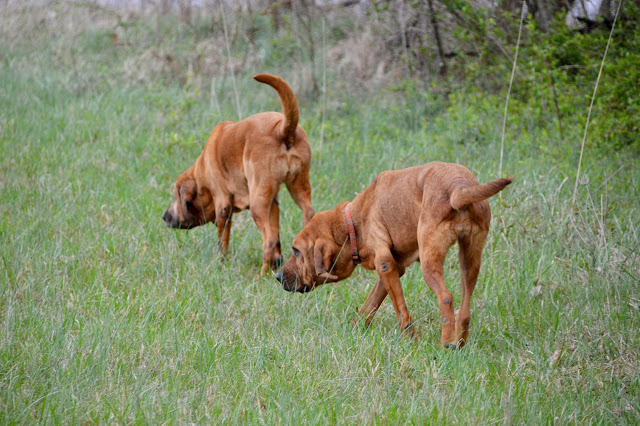 I am sure the added wind this morning also flipped up more scent than normal for them to investigate. Stella was more interested in scent today rather than her normal natural protein supplements. 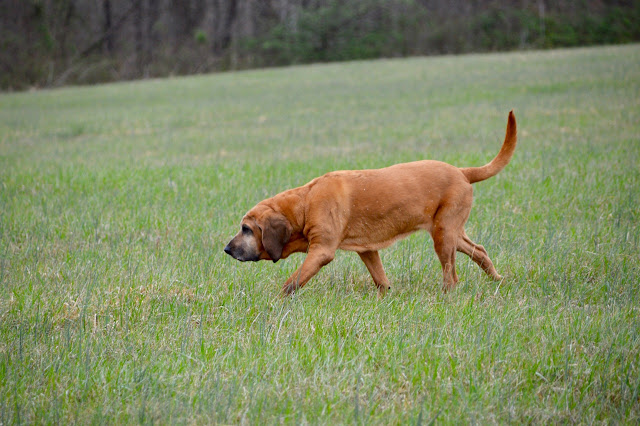 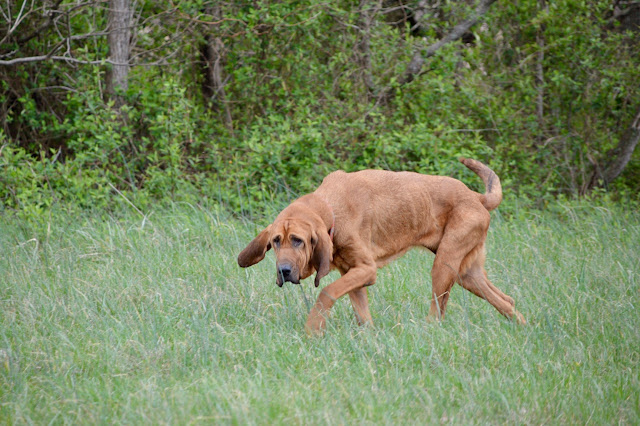 We had just turned the corner to head back home on the final leg of the walk when I noticed something on the horizon, near the neighbor's wooded area where Stella has so much interest in.

Whatever it was, it was huge and it was moving. It looked just like that unidentifiable object that Stella was chasing a few months ago into the woods.

It's the huge field cat I see sometimes at night when I pull into the driveway. Or it might be a neighbor's cat, I don't know. What ever, that is one big cat.

Would either hound notice?  If so they would be gone in a second. There is an 'escape' something in the wooded area where the cat got away once before. 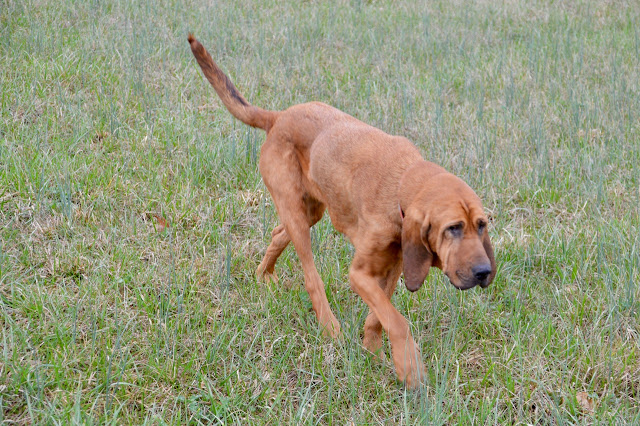 So far so good. Neither hound had noticed the cat, nor smelled the cat. I quietly urged them to follow me on the path. Saying "come on" as many times as it took for them to walk next to me away from the direction of the cat.

Stella never veered off the path and Sadie walked to my right ... close call. I didn't know if I had enough speed today to be chasing two bloodhounds out of control. At least I know there is a cat in the area and can keep a look out for it on future walks. 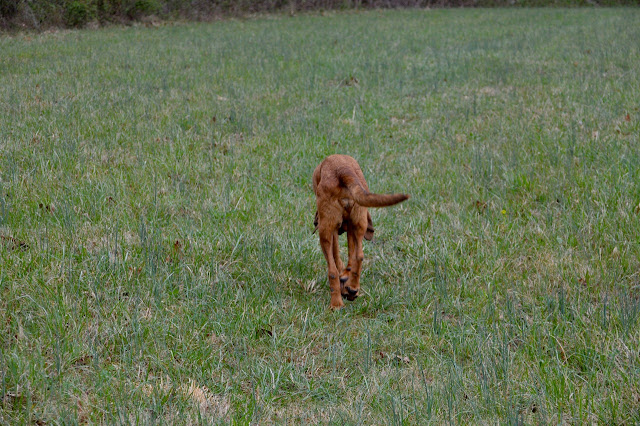 Again the concern is always ... chasing an animal that leads the bloodhounds to the highway. You never know what a dog or cat will do when there is a hot pursuit from behind them. So even if they would get some great aerobic exercise chasing the cat in the field, you never know if that is where the cat will stay. With deer you have a pretty good idea they are headed for the woods.

I am feeling pretty good about starting my 'to do' list on Tuesday after college basketball is over the previous night. I could start on Monday but it's "Opening Day" for major league baseball so I will probably be couch bound most of the day watching baseball and then that night for the NCAA championship game in basketball.

There is a lot to get done this spring and summer, much more than last year. Time will tell how much blogging I do during that time. I won't stop blogging but it may not happen on a daily basis.

The hounds are good here in 'the tropics' of southern Indiana.
at March 31, 2017
Email ThisBlogThis!Share to TwitterShare to FacebookShare to Pinterest
Labels: Field Cat, Morning Hound Walk