Hounds Have A 'Tornado Watch' Issued 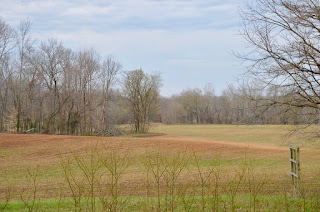 I have to admit it's pretty nice to have the windows back open with the sound of birds singing outside. I wasn't sure how much we would do today since rain was all over the radar.

Once again we woke up before daylight but I was able to convince Sadie that we were still retired and nothing takes place until after daybreak. With Stella snoring away, there wasn't much to discuss. We still got outside early though and the rain was so light you can barely hear it. Sadie and Stella stopped in their tracks to decide what their next move would be. 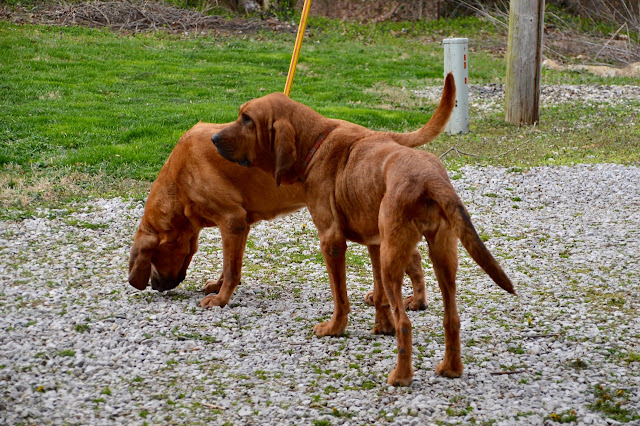 After a couple of cups of coffee, the reading of all of my sports sites, it was time for our first walk of the day. I was hopeful to get it completed before the rains came. Intellicast radar was showing rain about 6 miles to the west of us. Yet, when we took off there were blue skies and sunshine to the east.

I guess I didn't need the 25' retractable leash after all and could have brought the camera on the morning walk.

Right after lunch we tried again to do something outside. I needed to pick up some sticks in the yard and thought about moving the Z4 out of the way so I could pull my ladder out of the shed and get up on the roof. With rain in the forecast I decided the roof could wait another few days for me.

We have 7 acres behind our yard and neither hound wanted to go any further away than the chair I was sitting in. I found out soon after why ... it started raining again. 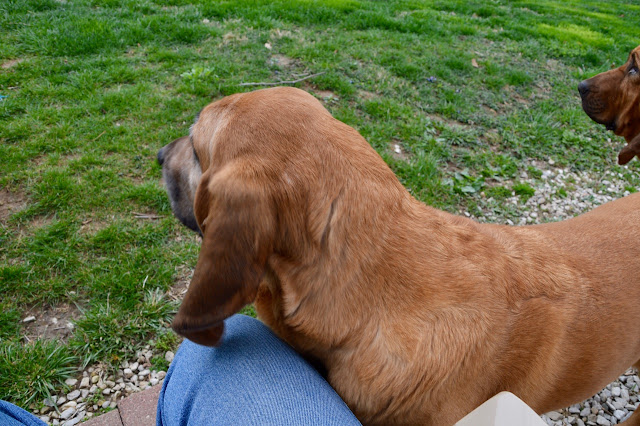 Yesterday afternoon, for the first mow of the year, I fired up the lawn mower without any problems and cut just part of the lawn ... the area where the grass was taller than anywhere else. It looks like crap now after the winter and mole damage but it will fill back in and look good after the spring rains. I am thinking about installing some kind of edging between the yard and driveway this spring/summer. 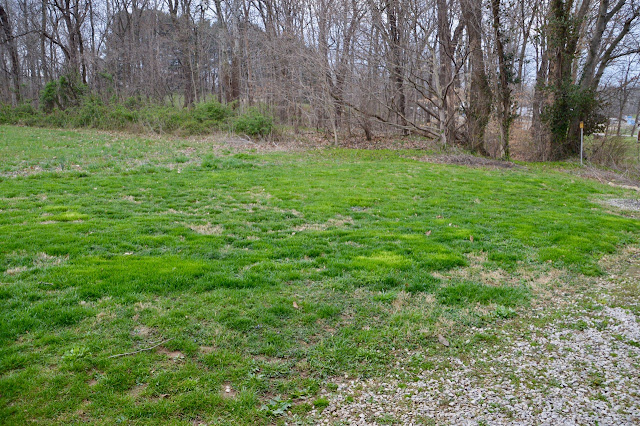 You cannot tell but I did a couple of laps down the edge of the yard and the driveway, then a small triangular section to cut the high grass. Heidi seems to produce some pretty strong fertilizer over the winter. 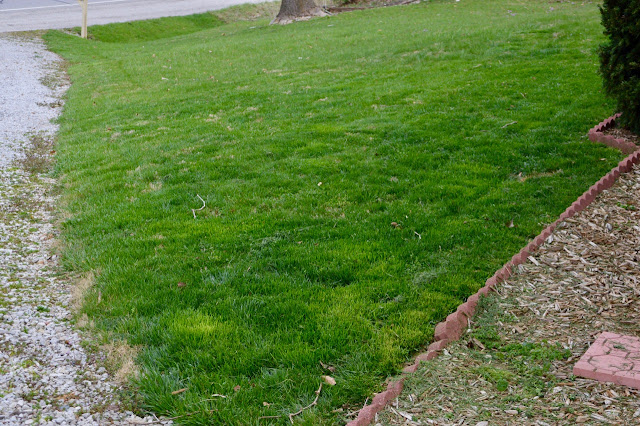 Speaking of Heidi ... I think her coat and skin look the best it has since September 2014. That next month in 2014 is when her skin issues went ballistic and out of control with loss of hair, all paws and legs were bare and at times sore and raw. She has been on nothing but straight kibble this past year, no meds or supplements.

It has been 32 days since I switched her to SPORTMiX manufactured by Earthborn Holistic Pet Foods. It is strange because the first ingredient is lamb "meal", no lamb. That is followed by brown rice, peas etc ... she has gained her weight back and hasn't looked this good in a long time. All of this improvement has happened in the past month. 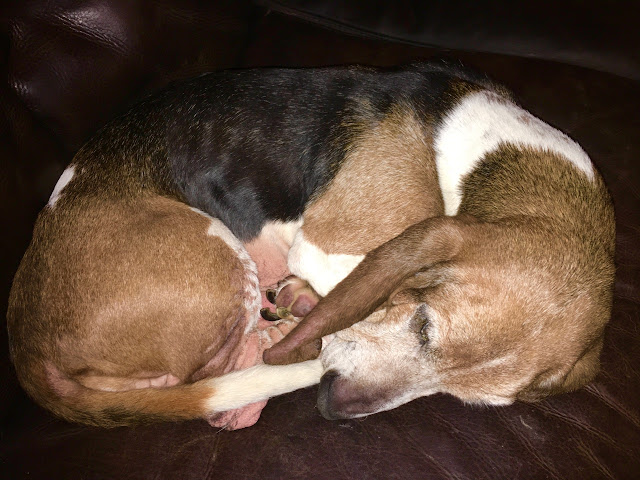 Besides her picture, I took these next pictures with my iPhone 6s yesterday. I forget sometimes that it does have a good camera and in some cases, I think it takes a sharper picture than my Nikon D3200 does. These next 3 pictures were posted without any editing. You can see how tall the grass was in that section before I mowed yesterday afternoon. 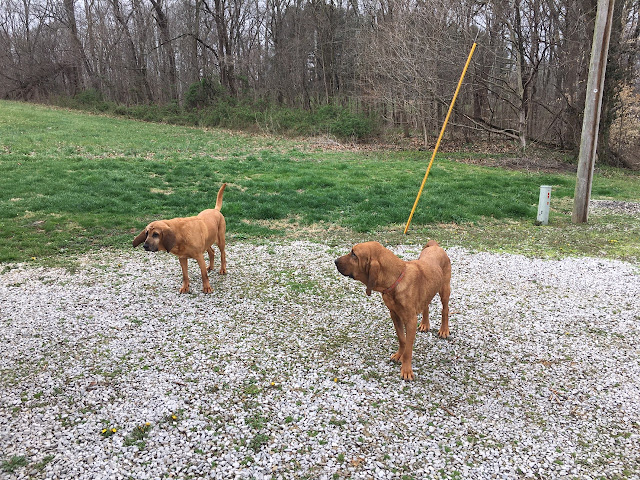 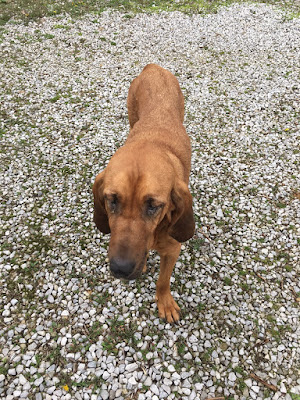 Stella looked down about the time I pushed the button to take the picture. It's hard to tell but she does have both of her eyes open.

I am still undecided what to do about the weeds growing in the driveway. It seems like they have actually multiplied in number since I was on my hands and knees for four days in August 2015 pulling out weeds one at a time.

I am thinking of spraying a mixture of water and vinegar this year as my weed killer on the driveway and the river rock in back. Anyone have something that works to kill weeds from non chemical homemade brew? 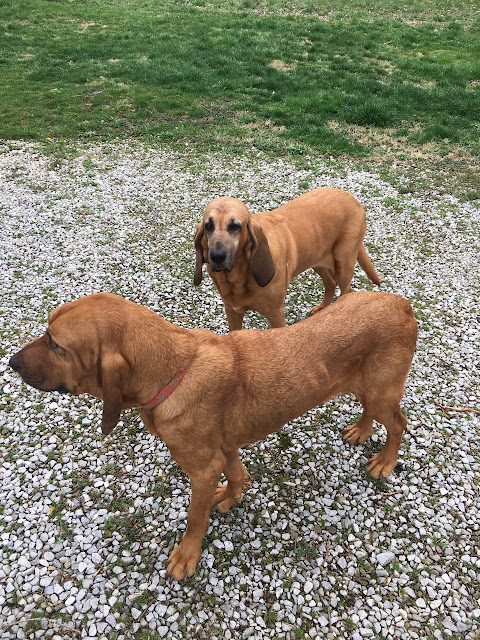 Can you see any difference in the sharpness of the iPhone pictures compared to my edited Nikon D3200 pictures?

After all the hounds and I came back inside due to the rain by 1pm it was sunny and blue skies outside. It was hard to believe we were to get severe thunderstorms with possible tornado activity later tonight. During the light rain I played around a little on the blog and changed the page fonts, the post title fonts to PT Sans.

Since we could not tell if it was going to rain or not because the weather 'up there' was moving at a fast pace and different directions ... we decided to take our 2nd walk of the day.

This first picture is taken toward the SW.

I could tell that Stella was going to lag behind and I was going to let her do whatever she wanted. I had the 6' leash for her in my back pocket just in case it started to pour rain and we needed to get back to the house fast. 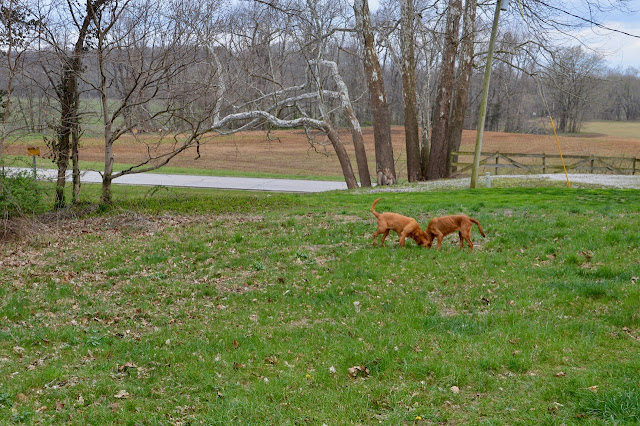 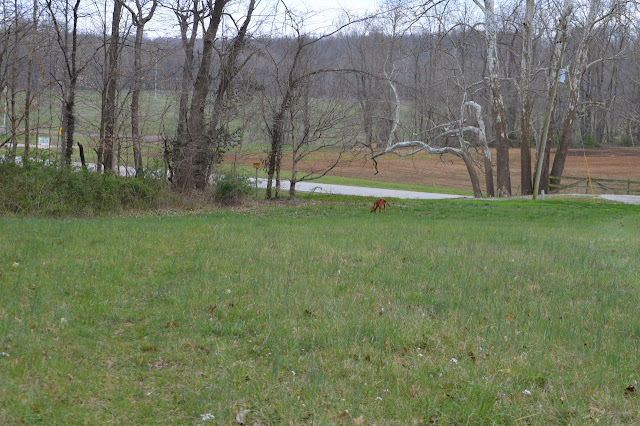 This was taken toward the north. The camera doesn't pick up the fast movement of the clouds going in a left to right direction. 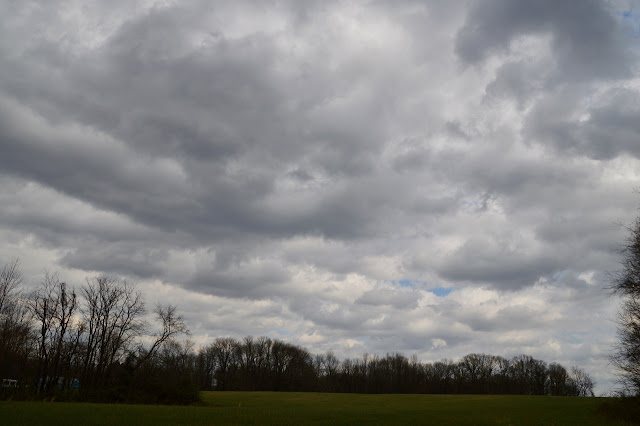 Shocked to see Stella was headed our way. What concerns me a little is last year she would have been running full speed to catch up and the past few months she hardly runs at all. 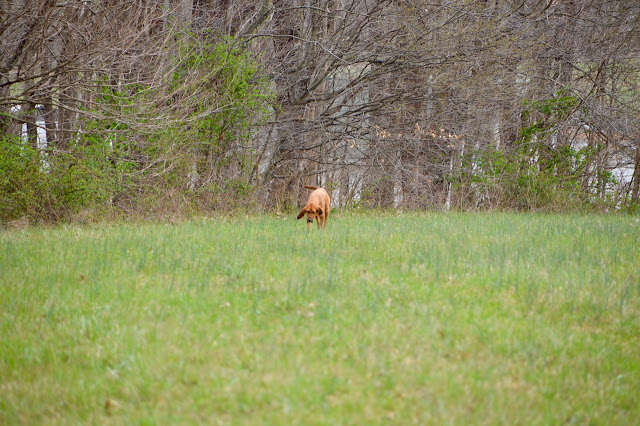 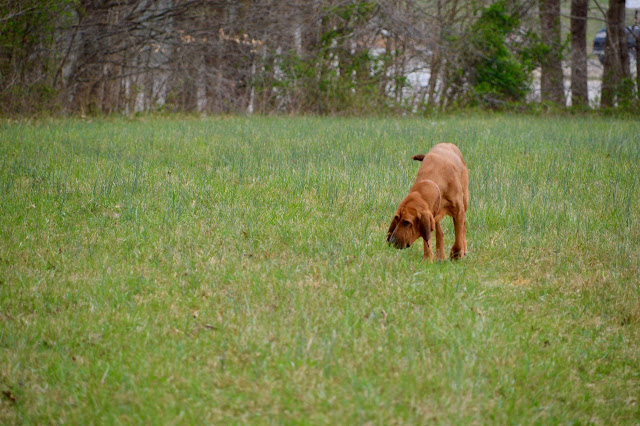 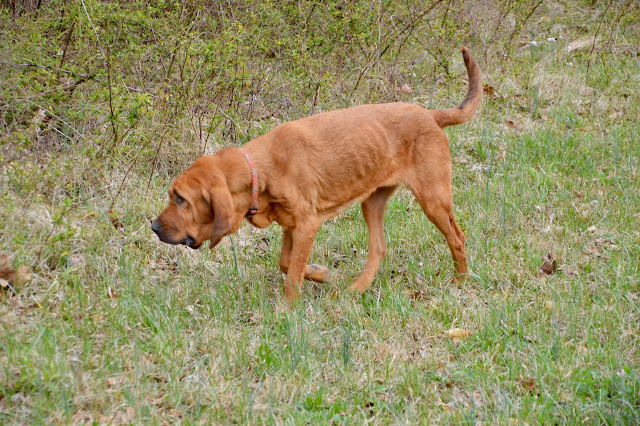 It was only 3 minutes after that first sky picture that I aimed the camera in the same southwest direction to see sunshine and blue skies ... 3 minutes!! 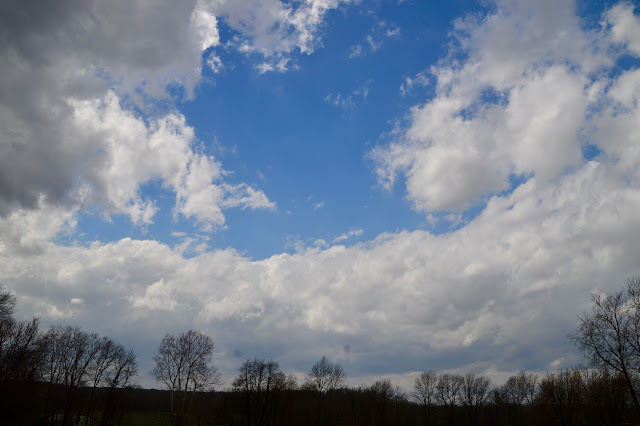 Sadie was oblivious to strong winds from the southwest, indicated by the blowing hay. It takes a strong wind to blow her tail from the upright position she normally carries it. All she knew was she was on 'her' walk and that is all that mattered. 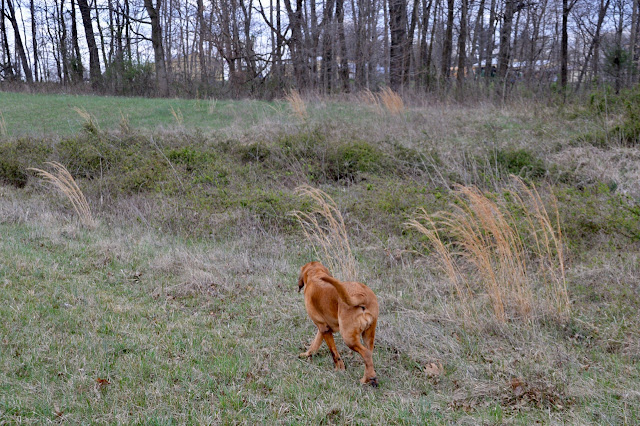 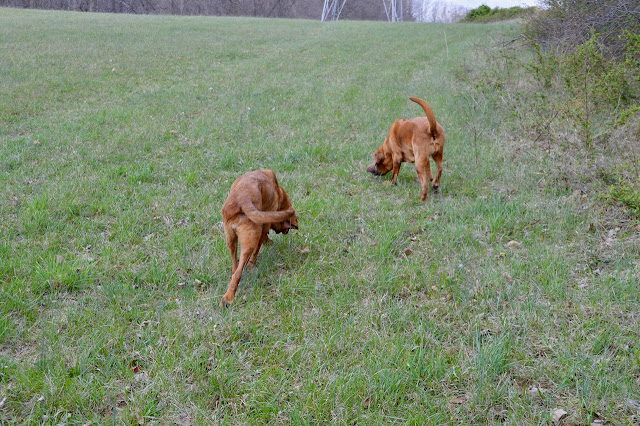 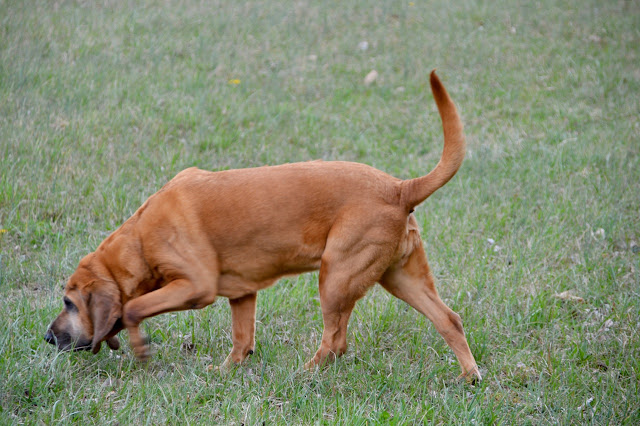 Stella stayed fairly close and didn't veer off too many times. 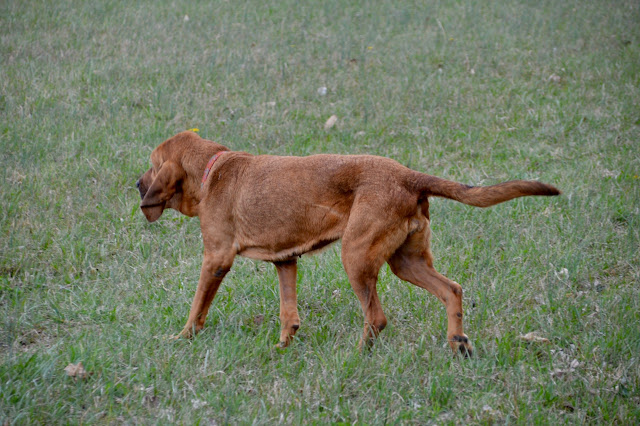 7 minutes later I pointed the camera once again toward the southwest. The wind was now strong enough I had a hard time keeping the camera steady. 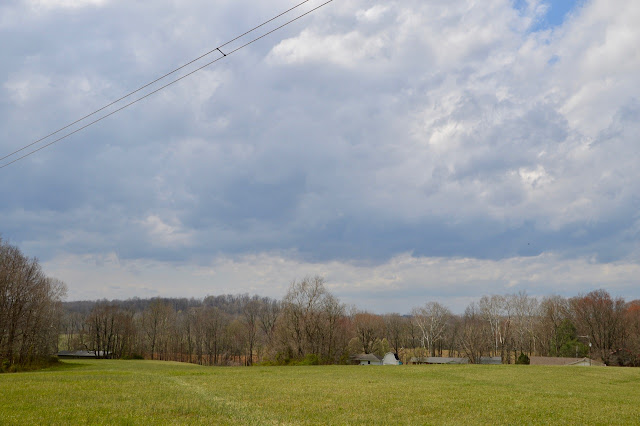 Stella walked slowly all the way back to the house. She was sound to sleep minutes after going back inside the house after the walk. That seems to be the norm for both bloodhounds. 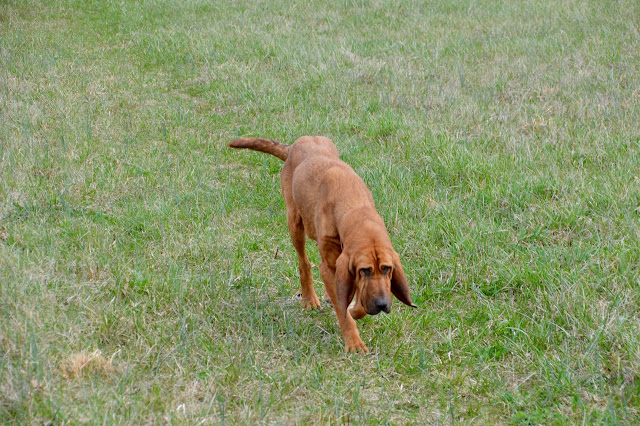 We were not finished with the walk yet, but this was the sky in the west, 11 minutes after the first sky picture in this post was taken. 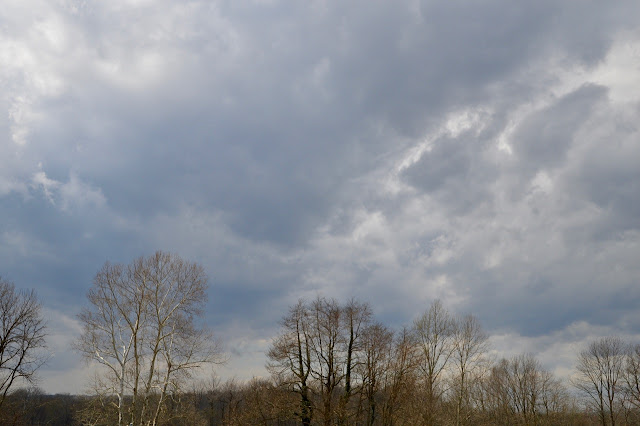 At 3:07 pm they issued a Tornado "Watch" until 10pm tonight. The new stats show there is a 50% chance for two of them and 20% chance of 1 strong one. All through central Indiana, but my county is colored in to be included. Possible lime size hail with wind gusts up to 70mph. 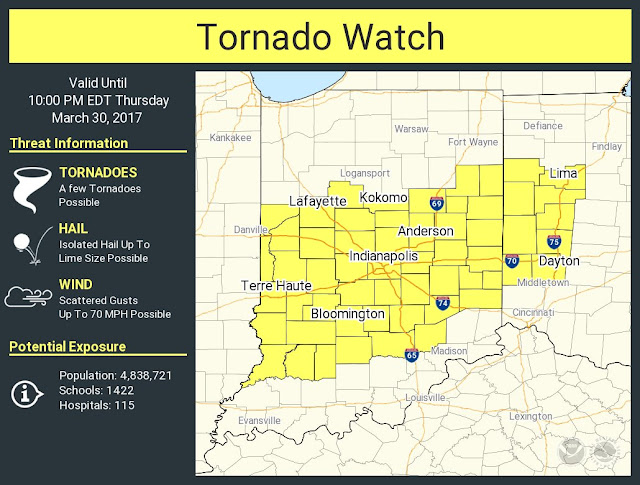 A month ago or so, it was a 5% chance one night and we had two funnel clouds touch down 70 miles away. Never lost satellite internet connection that night and was able to track live radar to tell if the hounds and I needed to head for the center of the house since we do not have a basement.

So in preparation the iPad and iPhone are being charged to 100%. I've never had damage with these warnings but have had some close calls. It's always best to have a plan and be prepared just in case.

I imagine the old storm windows will be rattling and making a little noise tonight while all three hounds sleep in their normal spots in the living room. Sadie will be in her large leather chair while Stella and Heidi will share the couch. A seat for me is always optional.

The windows are open today here in 'the tropics' of southern Indiana .. it smells like Spring.
at March 30, 2017
Email ThisBlogThis!Share to TwitterShare to FacebookShare to Pinterest
Labels: iPhone 6s, Nikon D3200, Tornado Warnings, Weeds, Yard Maintenance