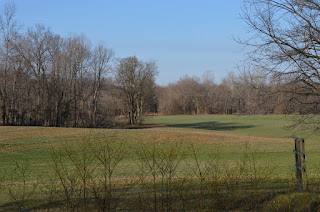 Bloodhounds are so much different than Basset Hounds. They are not as laidback as Basset Hounds and every day to them is a vacation full of potential excitement.

They are somewhere between a child experiencing their "terrible two's" or one starting their teens.

There is never a dull moment when you own a bloodhound, let alone two of them.


With a beautiful warm morning, Sadie wanted her walk before I had made coffee. She wasn't giving up and stood their in that stare for over five minutes. 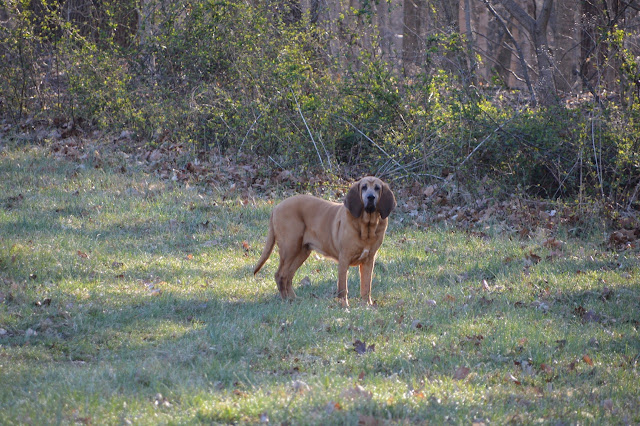 When neither one would come back to the house when I called their names, I went back inside and poured my daily ration of coffee grounds into the filter, poured just the right amount of water to make two large cups of coffee and flipped the lid down for it to start dripping into the decanter.

I took a warm wash cloth and cleaned Heidi's face and eyes. I even opened my Activity Monitor on my computer since it tracks data usage live, all before I went back outside. I figured during the elapsed time both bloodhound had probably wondered off in the field or the woods by the neighbors house. 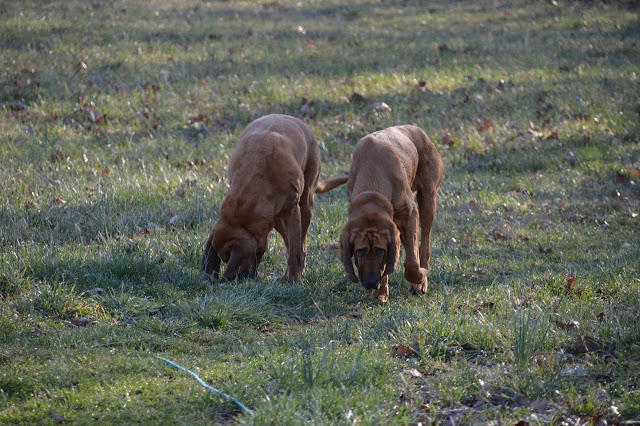 I was shocked when I walk out around the corner of the carport ... they were both slowly walking back to the house, almost at the yard exploring every inch of ground.

An hour later we were taking our first walk of the day. There are two things that Sadie will chase at a full speed sprint ... falling leaves and birds that are on the ground. If you look closely on the upper left side of the picture you can see the bird that is going to give Sadie some great aerobic exercise. 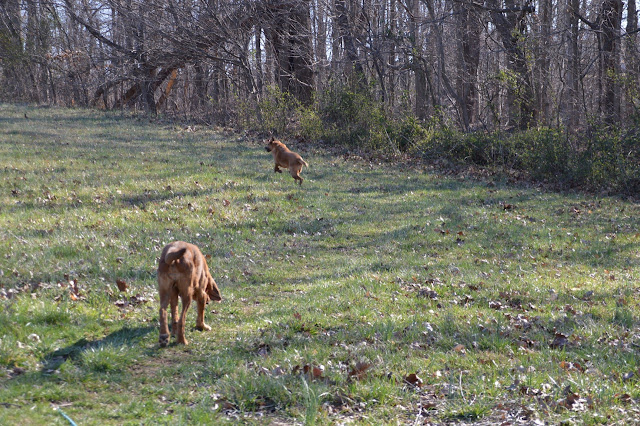 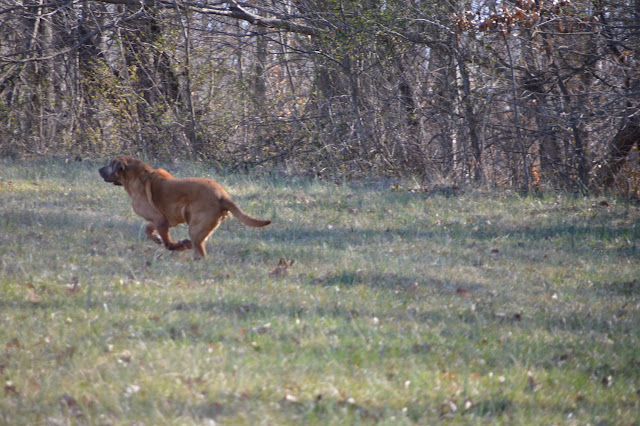 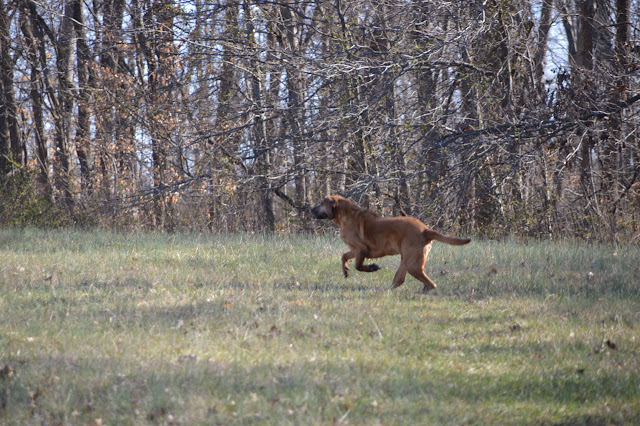 Once she decided the bird was gone and out of 'her' field it was time to circle back and check the area of the crime, then meet me to let me know it was time to start the walk. 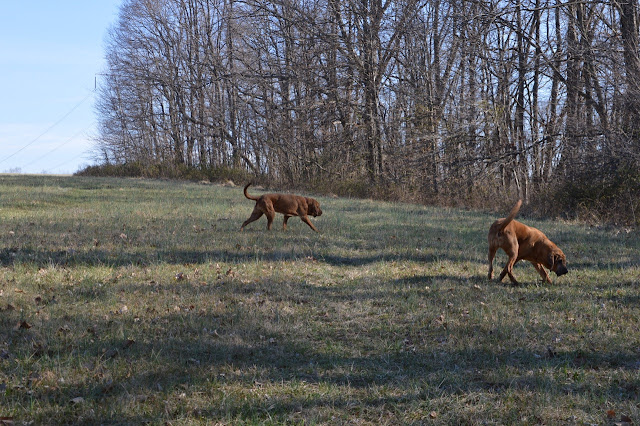 Stella moved out in front of us so it was looking like this was going to be the perfect early Sunday morning walk in beautiful weather. Little did I know at the time that a little later Stella would be setting a new record for any hound walk taken in the past 19 years. 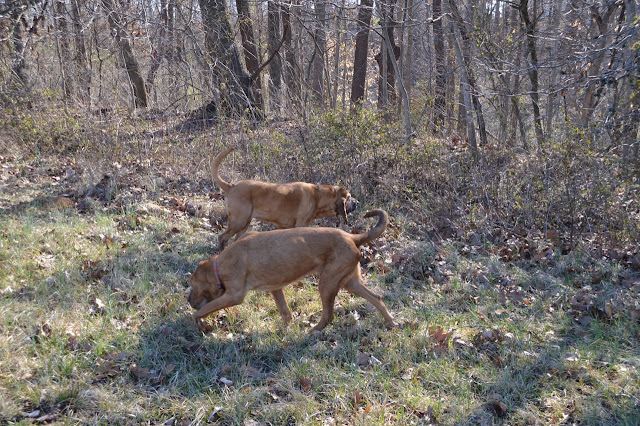 Sadie was still focused on the bird that got away. It had to be here somewhere and she was going to find it. 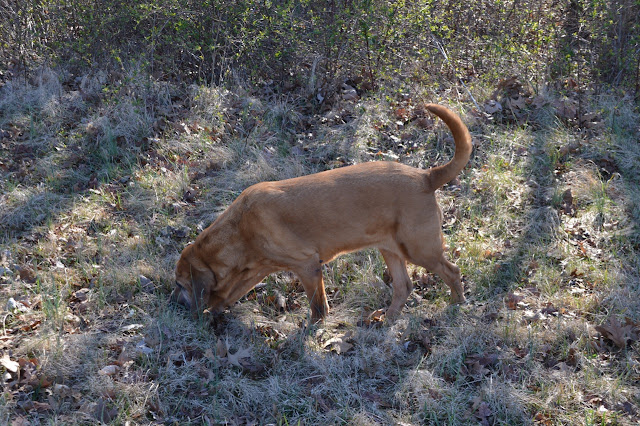 Stella was getting in her extra protein for breakfast but came trotting any time I called her. I walked over once to look and hopefully see what she was eating but all I found were leaves soaked with bloodhound drool. 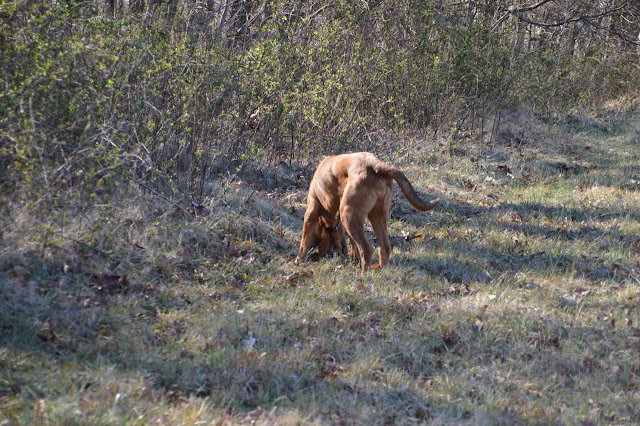 As we turn the corner we are walking at a good pace and I decided that if the hounds headed to the far right corner I would stand on the path along the back edge of the field and give them all the time they wanted to explore. 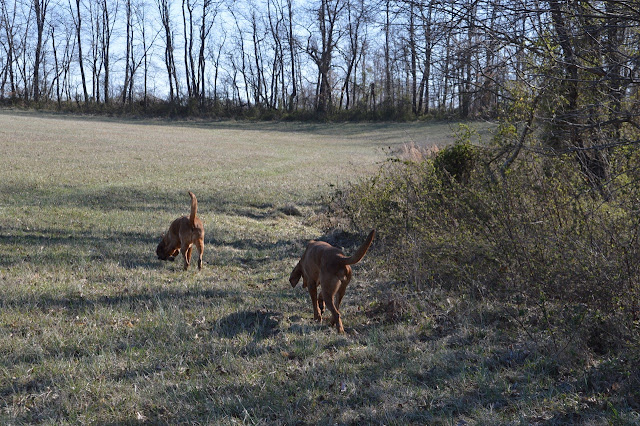 I didn't know just how quickly those plans would change. 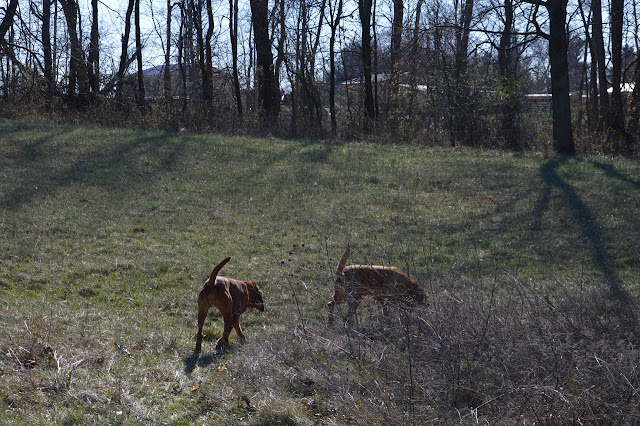 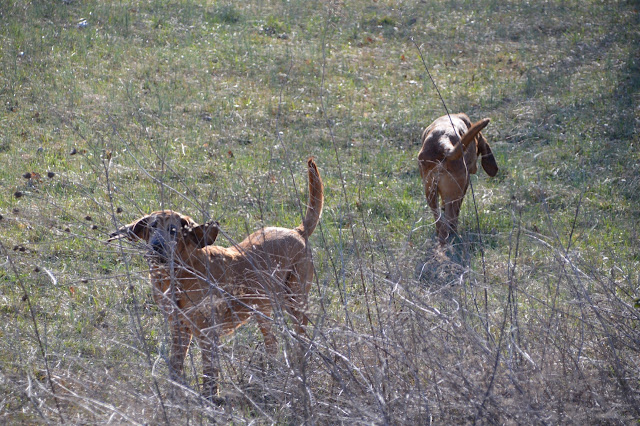 Things are looking normal and good at this point of the walk. They are walking away from the heavy deer traffic area and following the edge of the wooded area that will bring them back to the field along the path we walk.

I continued to walk a little further up the path, where I was going to take some pictures of all the field and some of the corn field behind us. 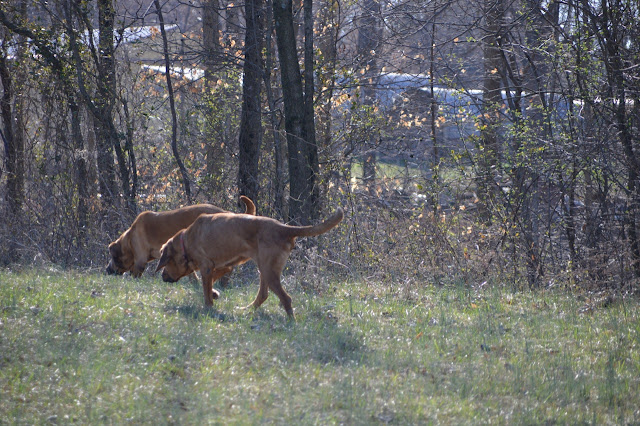 When Sadie ran up beside me panting and then looking back to where Stella was I knew something must be wrong. She seemed agitated. 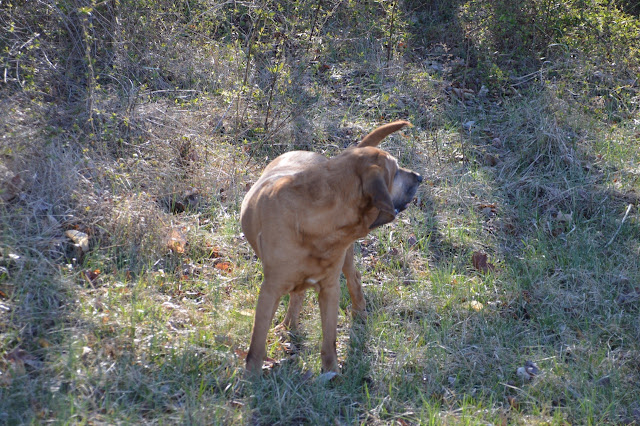 When I turned around there was no sign of Stella. I've seen this before, even in this direction so it wasn't a big deal ... except Sadie was not acting normal. She took off running in that direction. It was like she came to get me to show me something. 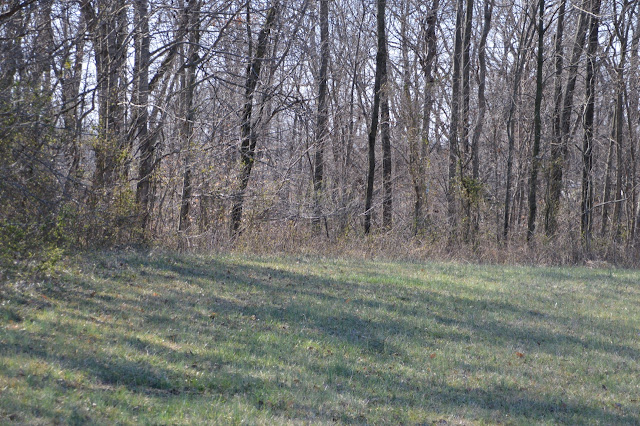 As I ran toward that wooded area I am now concerned because Stella is not on the left side where you see the green bushes, where she normally is hidden. She is not responding to me yelling her name. I don't see her anywhere ... I start to feel a little panic.

I stepped over that fallen tree limb you see in the picture below. I walked to the tree just to the left of center and found out just past that tree is a very steep slope ... no sign of Stella.

But wait !!!!  Just barely I see the tip of a red bloodhound tail, wagging in the air and it is moving away from me faster than I can move through the area. She is down heading down this steep slope into a thick wooded gully.

I try to take a picture of what I see of her, for me and this blog post ... but the camera isn't locking into an auto focus and at the rate Stella is moving away from me I don't take the chance of trying to get a picture ... because I am running down this slope yelling her name. She is taking off, locked into to something. 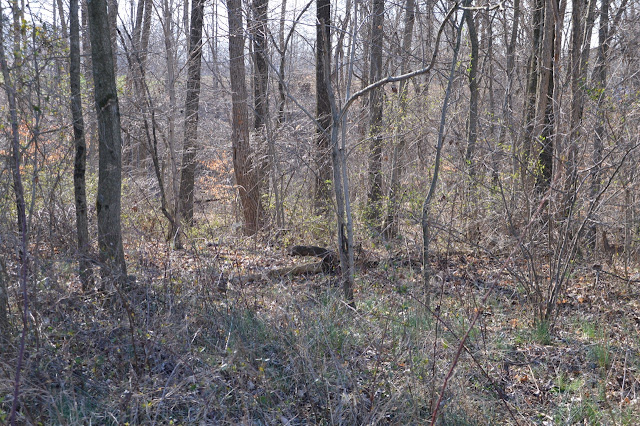 It was new territory for me. I had never been in this part of the woods. Sadie stood back in the field and I assume was watching all of this. She did not move into the wooded area.

After I walked her up the slope and back into the field, she and Sadie went running down our normal path along the back of the field as if nothing had happened.

She looks at the camera as if to say "what's the big deal?" 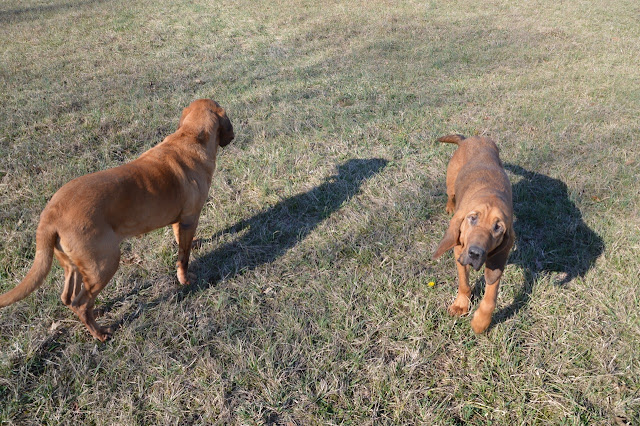 With my pulse rate up over my threshold from running down that slope, I had a pretty good idea that my hands would be moving enough that sharp clear pictures the rest of the way home probably was not going to happen.

I did not have the leash with me today but once Stella knew we were heading home she and Sadie trotted along the path in front of me. 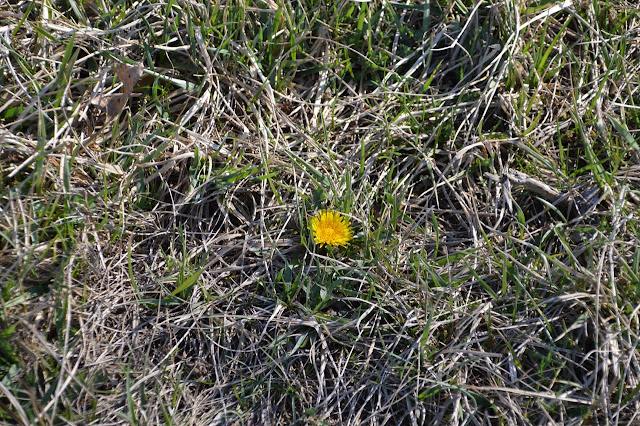 Does this mean it's officially Spring? Does the groundhog in Pa have any influence on determining when Spring will arrive in the Midwest? I think the dandelion is a sign that Spring is close to being here.

It's going to get up to 64° today. The hounds and I will take at least one more walk, possibly two. I'll take the leash this time because it looks like I could use it, unless Stella decides to do something entirely different. You never know whats up ahead with these two partners in crime.

She is a great bloodhound, with a funny personality and I admit she continues to give me "a run for my money" ...

They are both begging to be fed lunch right now, so I have to go.

It's a beautiful day here in 'the tropics' of southern Indiana.
at March 05, 2017
Email ThisBlogThis!Share to TwitterShare to FacebookShare to Pinterest
Labels: Dandelion, March Weather, Sadie Alerts Me, Stella Gets Away, Stella's Boundary