Stella's Out Of Bounds 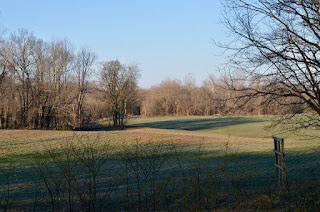 As we stepped outside in freezing air this morning it was nice to remember this would be the last day of cold weather for a few weeks if not longer.

We took the morning walk between my two cups of coffee. I had all of my internet reading done faster than normal, staying away from any news websites. Of course after Sadie and Stella came back inside from the trip they make after they eat breakfast ... Sadie sat in the doorway giving me the stare that she wanted the walk right then. I had to have at least one cup of coffee before we could do that. 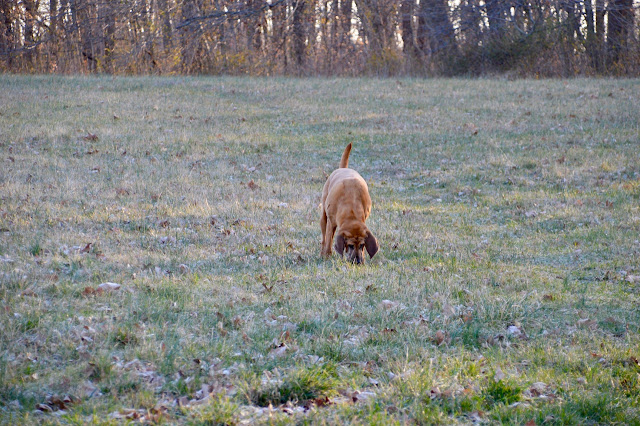 The grass was frozen and I could hear the crunching sound as I walked into the backyard. Slight winds out of the north which is opposite than the normal air flow. That didn't bother either hound this morning. Although I didn't sense the intense focus like they have had these past few days. 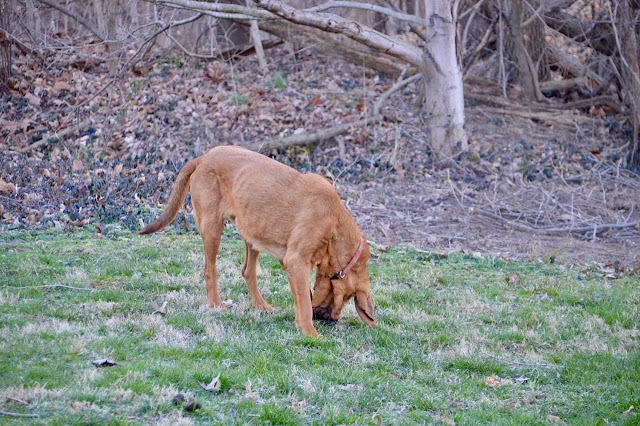 I had decided while putting my down parka on that I would let them have total freedom on the walk this morning. I was going to walk my pace, take some pictures and hopefully both of them would be close to me as I returned homed. 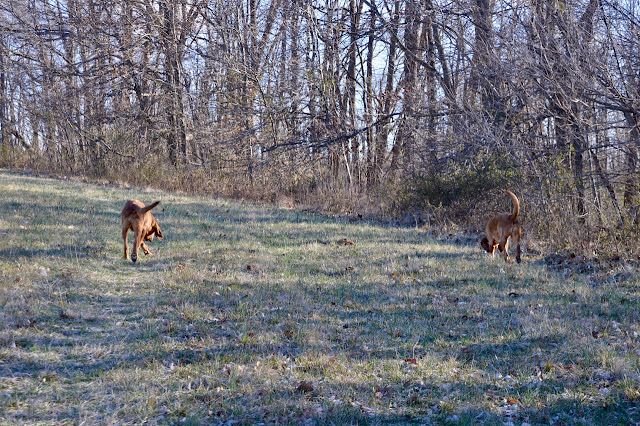 I could tell soon after starting the walk that this would be a morning where Stella was in her own little world. Nothing needed to be said because any words from me would be ignored. I kept walking ... it was colder than I had planned for. The coat and gloves were great but the jeans were not keeping the cold air out too well. 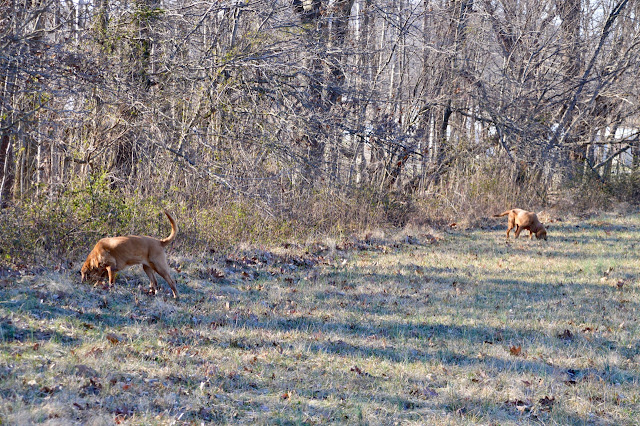 As I was about the make the first turn of the walk Stella confirmed she wasn't interested in walking today. It was going to be a morning of protein supplement in the natural way. I didn't want to think about it. Besides, the air from the north was freezing ... wasn't it just a week or so ago I was out in cargo shorts and a t-shirt? 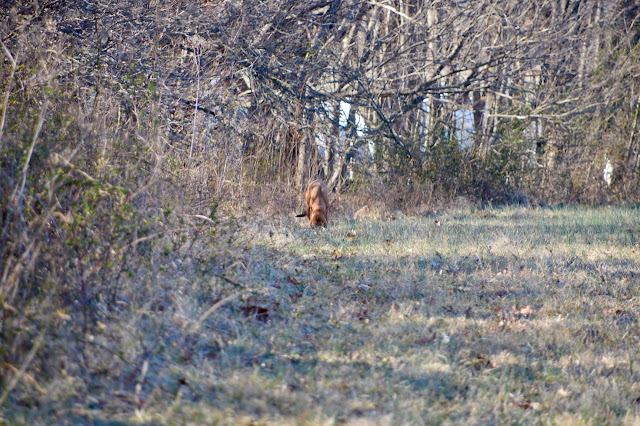 After downloading the pictures from the camera this morning into my Apple Photo program on my iMac ... I wasn't really happy with any of them. Even after editing a little, the colors were pale, nothing stood out from the hounds being active ... all of them seemed dull to me.

Yet, the sky was blue, sunshine and a slight breeze ... it's a nice day without the pictures. 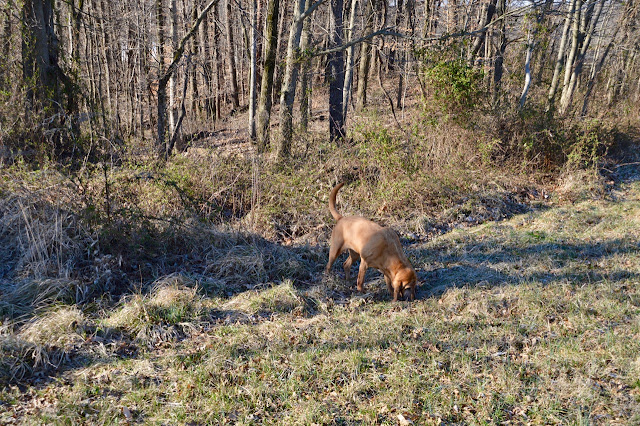 Sadie decided it would be a good time to get some running in. I wasn't to the back of the field yet but close. She sprinted all the way to me, hitting me in the knee with her nose ... letting me know she was there. That is good exercise for her. 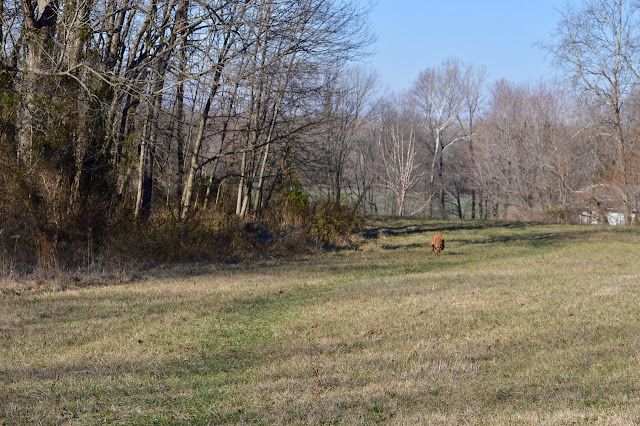 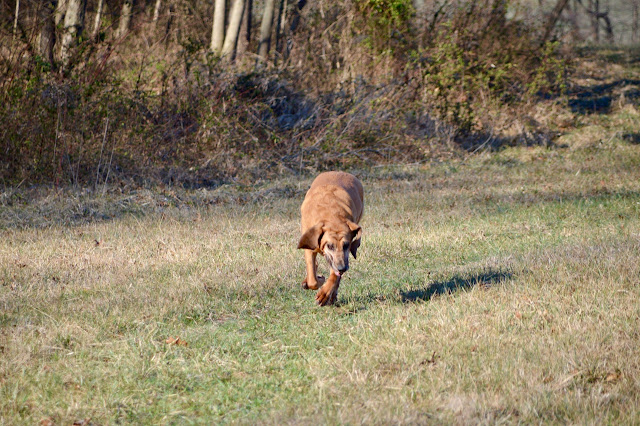 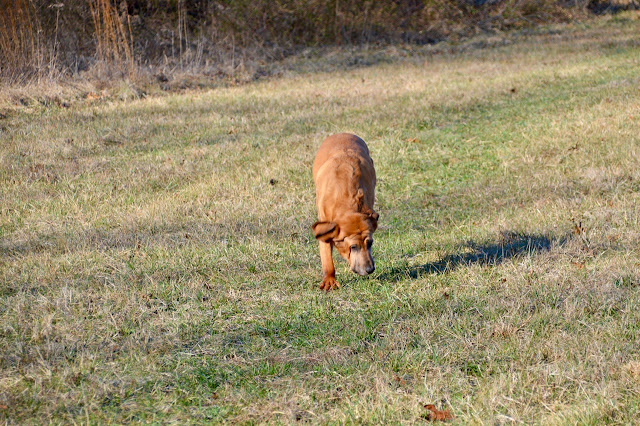 There was no sign of Stella anywhere. My eyes scanned the field toward the wooded area behind the neighbors house and she wasn't seen. Although it might look like the field is flat, there is some slight inclines. This morning I found out just how steep some of those inclines are.

I asked Sadie "where's Stella?" ... little did I know at the time she was looking in the right direction but in an area that is way out of bounds for all the hounds. 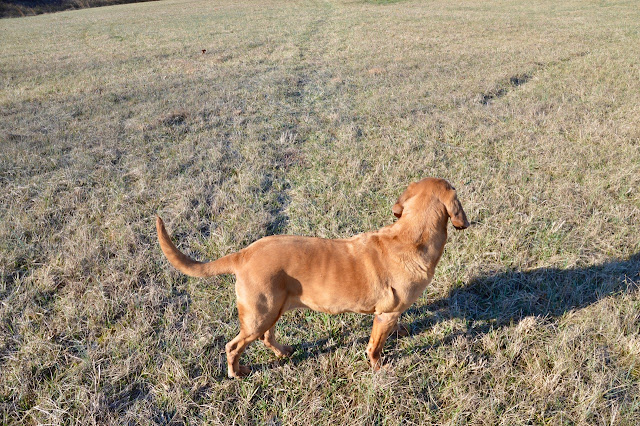 Finally 'out of the ground' pops Stella. She had walked much farther past the wooded area and was in an area that is definitely out of bounds. The only time she had been this far north was chasing deer and chasing the surprised dog that was walking with my neighbors in the wooded area behind my house last Christmas. 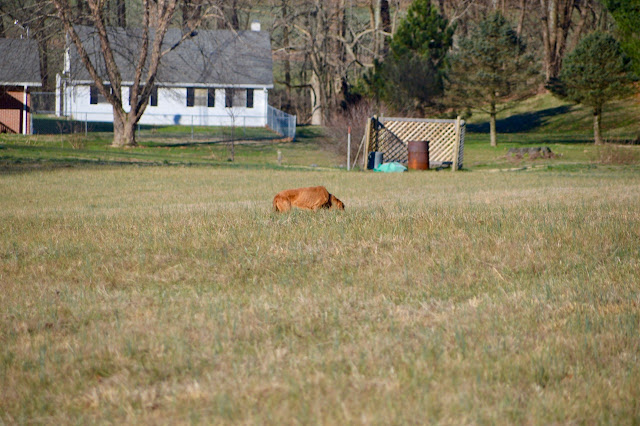 I had no doubt she was scarfing down something as fast as she could before I could get to her. She didn't move and was eating as fast as possible. The closer I got to her, the more leash I was pulling out of my pocket.

It looks like she has a mouthful of something. 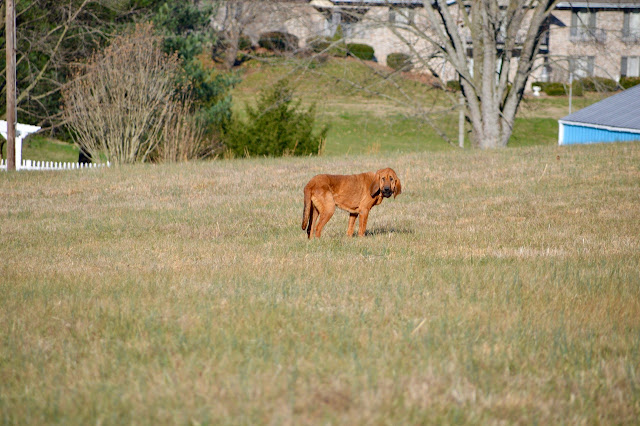 She wanted to show you she could still scratch with a leash on. 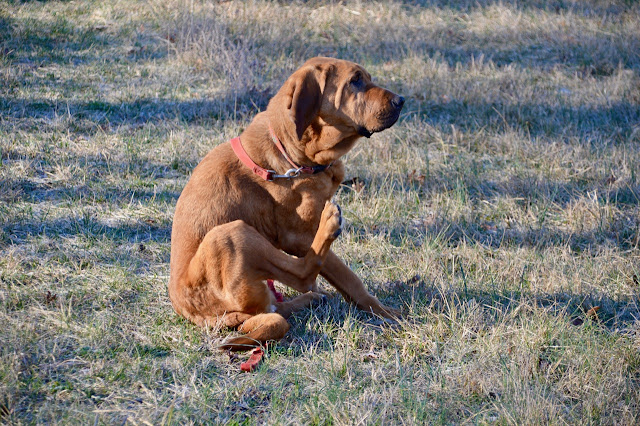 After walking a few feet, I took the leash off of her and let her slowly walk back to the house. Sadie couldn't figure out what the problem was, but there was still something interesting in the other direction. 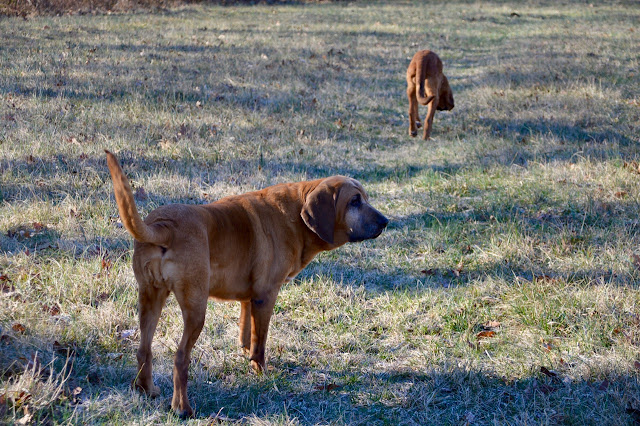 I'm not sure what's up for today. I have nothing to do outside but have the urge to go somewhere. At the same time I am not sure I want to fight the traffic. Friday traffic always seems to be a little worse that during the week.

The Mini Countryman is still working out well and I am pleased with the change in vehicles. It is still running at 31mpg for all types of driving. There are times I do wish I still had the Toyota FJ but when you drive as few miles as I do in a year's time, it really doesn't matter what vehicle I have.

I am happy to be back blogging on Wordpress. I found out what may be the problem with my blog traffic although it is a new blog and it takes a few weeks for the search engines to index it. The keyword of 'bloodhound' in the search on Wordpress lists all kinds of blogs for everything that had the word 'bloodhound' in it ... but none of them are about dogs.

Basset Hound blogs seemed to be more popular but a lot of them started and then stopped blogging. From all the 'pros and cons' I read about yesterday, comparing which platform to use ... Blogger or Wordpress ... for what I am doing on this blog I can just stay here.

It was fun playing around yesterday looking at different templates. They call them 'themes' on Wordpress, and so many more to chose from.

After being up for 2-1/2 hours, Sadie has decided this is the day she is going to bug me, bother me, beg for stuff ... she seems restless this morning ... I don't ever remember basset hounds being as driven for attention as bloodhounds are, but that might be because I have two bloodhounds.

I might blog later but right now things are pretty quiet here in 'the tropics' of southern Indiana.
at March 03, 2017