Surprise!! Sadie Gets Her Walk

Glancing outside about an hour before the predicted time that the rains would stop, I saw it had stopped ... Sadie, Stella and I didn't hesitate going outside. Cabin fever will do that to you. I wanted to take a stroll around the yard and check for any damage or downed tree limbs.  Sadie had other plans. She had not even got into the driveway when she stopped, turned and gave me the look to "let's walk". 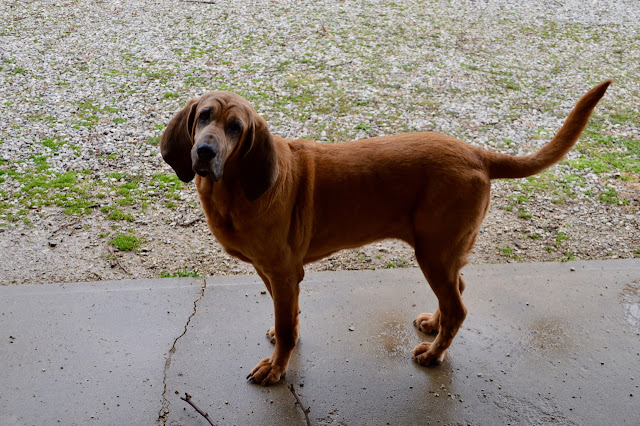 While Stella was checking out a very small piece of the rip rap I had put in a few spots on the bank in the yard, Sadie was more interested in getting into the field. 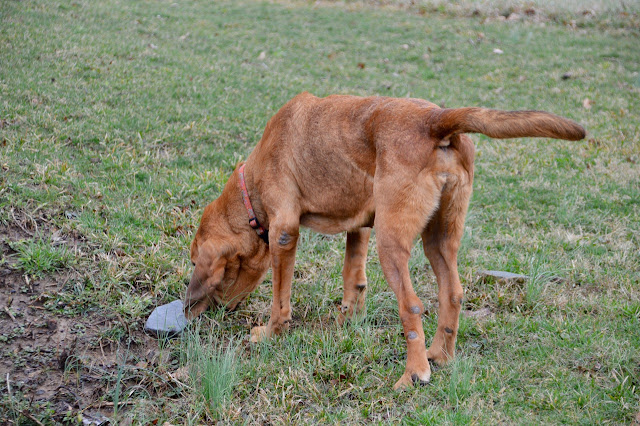 I was walking behind the old fence in back through the area where overgrown brush burned out and was planted with grass seed a few years ago. I noticed this tree just off the yard and in an area between my fence in the rear side yard and the field. 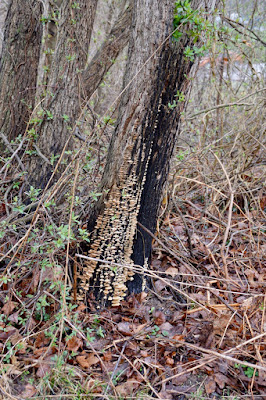 I don't believe I have seen any tree do that if it was near the yard. I was planning on burning off this overgrown area last summer, when I caught some of the field on fired down by the highway.

After that I decided I would not burn any of the upper part of this area because I didn't have enough water hose to reach it, thus I'd have nothing to control the fire if it moved into the field.

You can see the new green growth, so I am hoping all of the grass seed I have planted the past two weeks has not been washed away and will start sprouting soon. 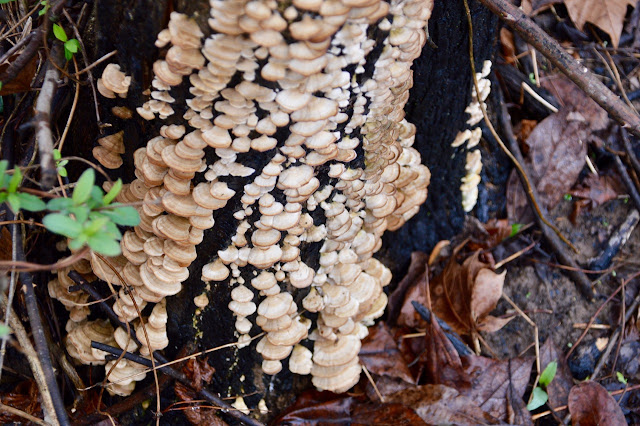 This is just to the left of the tree pictured above. You can barely see the sign frame that I take a picture of every morning from my carport step. So this is on the northeast corner of my property. My survey from 2000 say this is not my property past the fence and the neighbor's survey from 2014 says it is my property. Who knows? 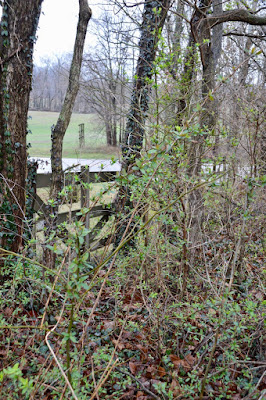 Sadie had enough of looking at the yard, she wanted 'her' walk to take place. A few steps into the field showed me what I expected, a lot of water. The higher we climb the wetter the ground will be. Can anyone explain why? 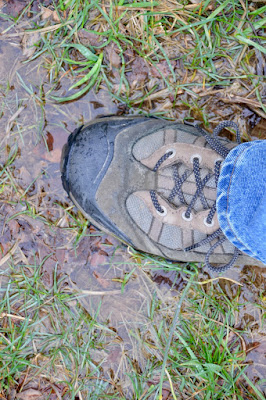 I continued walking, hearing the 'squishing' sound of the water coming up over the sides of my boots, just above my sole. The more steps I took showed me we could continue and possibly get the whole walk in without turning around early. Sadie figure the walk was on no matter what ... so did Stella. 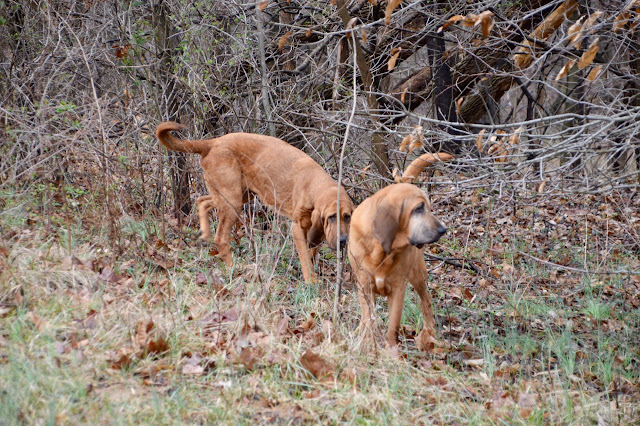 Is it my eyes or imagination? ... but it looks like the chewed tree limb is reducing it's diameter with a slightly new design. The edges are not as smooth as they once were. The stuff must taste good. 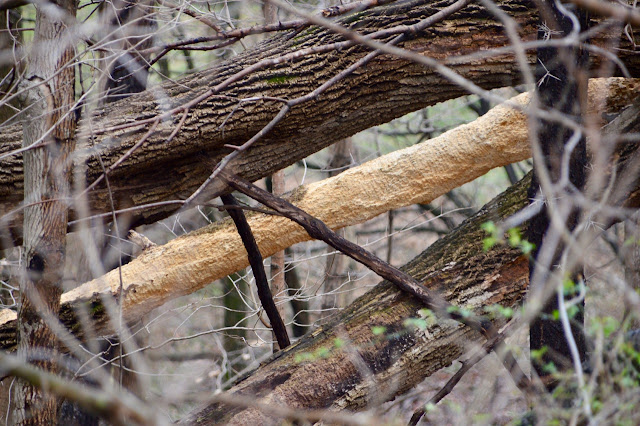 After Stella's performance the other morning I wanted her to stay fairly close to Sadie this morning. I didn't have to call her much and she walked along with us with no problems and no leash ... I didn't bring it because I wasn't planning to take the walk when I came outside. 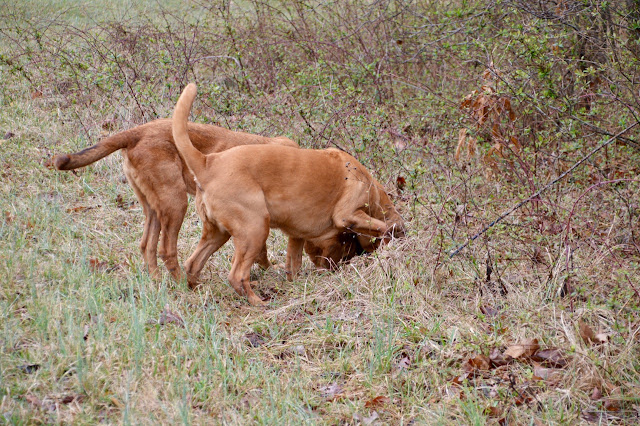 I could tell by the way the brush was mashed down just how hard the rain was along with the strong winds last night. 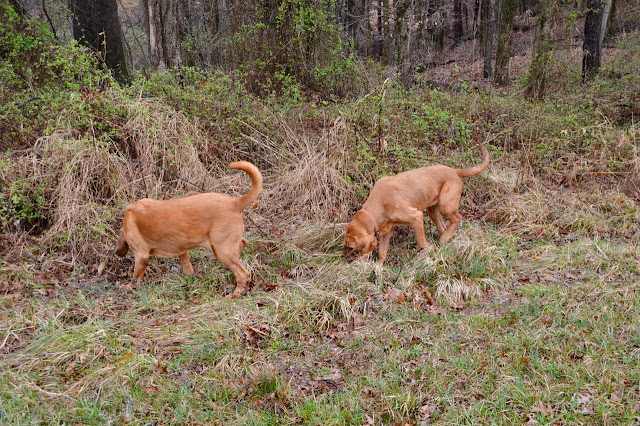 I am not quite to the back of the field on our path when the water level rises. Even as I stepped around this puddle into the higher grass, I still had to walk in visible water. 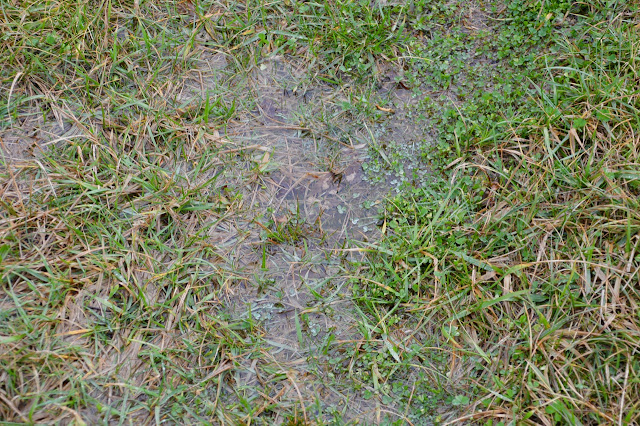 Stella is never thrilled when she gets her feet wet. She walked slowly, one step at a time as her paws became soaked. She was almost in slow motion as Sadie waited for her up ahead. 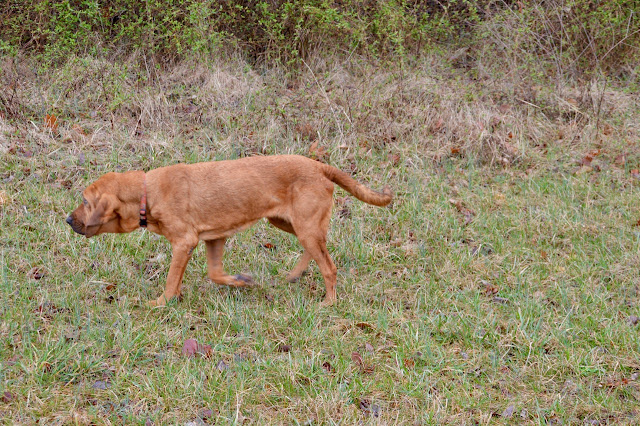 Nothing bothers Sadie on a walk, rain hail sleet or snow. She waited for Stella to catch up. 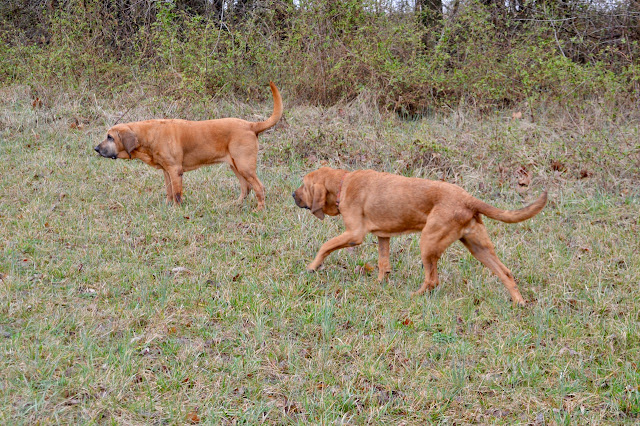 Once she had made sure the back of the field was 'clear' she took off running for the center of the field, while Stella walk right beside me. Stella was so close the 18mm lens setting could not pick her up in the view finder. Also for some strange reason, my focus setting changed back to a 'all focus' instead of the 'single point' that I use. It normally does that if I take out the battery to charge it but not between using the camera on different days. 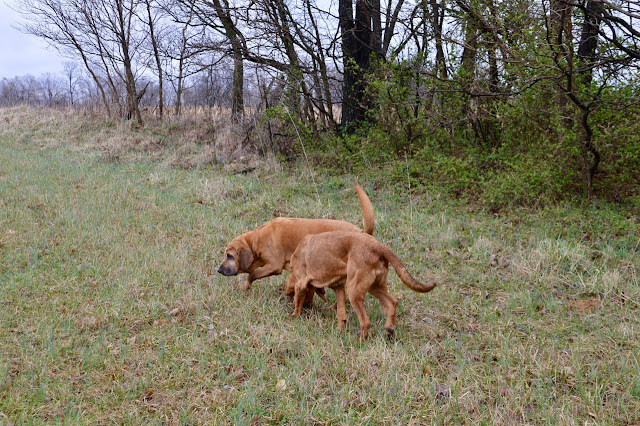 You may notice how the field angles downward toward my backyard. The underground water moves toward my backyard, veering left and over the bank just in front of my burn pile. I believe it is also the cause of the ground swell I get along the back side of my house. I have a lot of work to do this spring and summer to fix that. 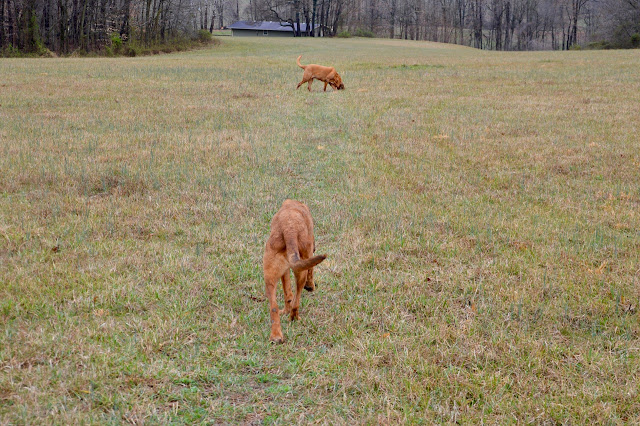 The sun is trying it's hardest to move through two days of overcast skies. As I write this I can see it getting brighter outside. Sunshine for the rest of the week sounds good to me but I am not thrilled about the potential for snow on Saturday, even if it's 1"-3". 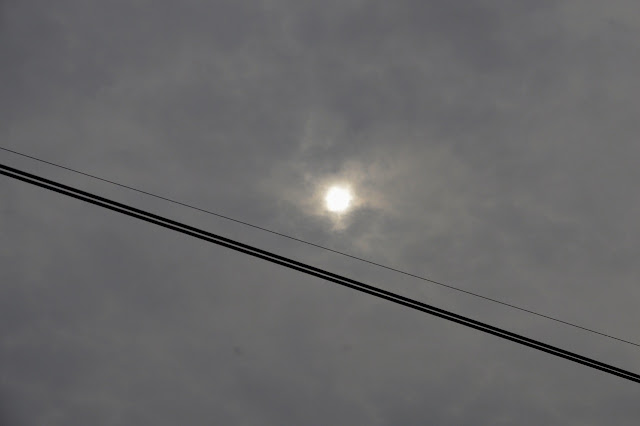 I might want to get back to the house but that doesn't make Stella walk any faster. It doesn't matter what Sadie does either on this last part of the walk because Stella will do what she wants to do on her own time. This next picture makes her look skinny. I am hoping the recent change of dog food with higher fat and more protein puts the lost weight back on. 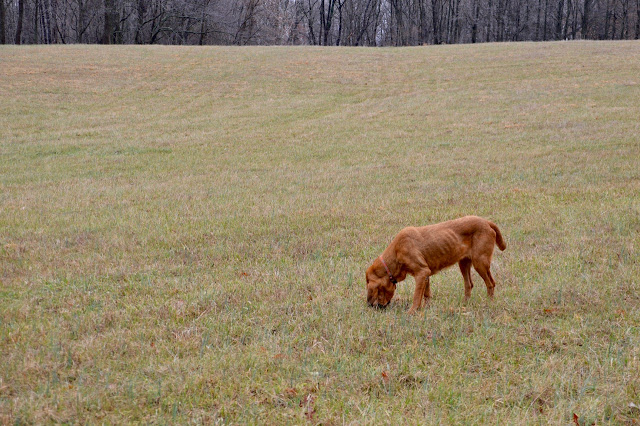 She also doesn't seem as energetic as she was this time last year. Pictures from a year ago show her and Sadie running in the field together. I can't remember the last time Stella was on a full out sprint in the field, not counting her escape the other day down into the wooded gully. 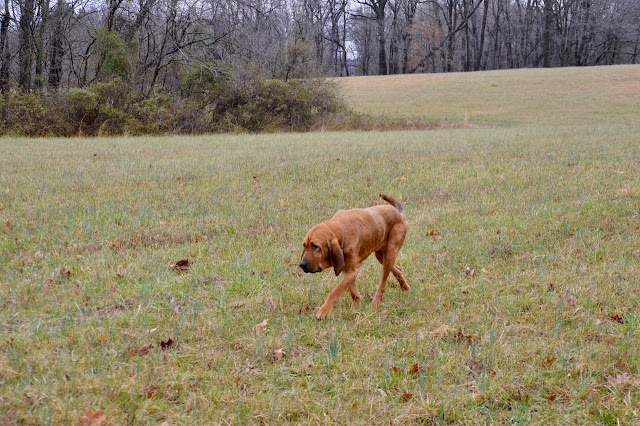 We might be getting close to the yard but that doesn't mean there isn't something she can find to eat. At least they baled the field a second time last fall so it's been nice to walk through this winter without the taller grass. 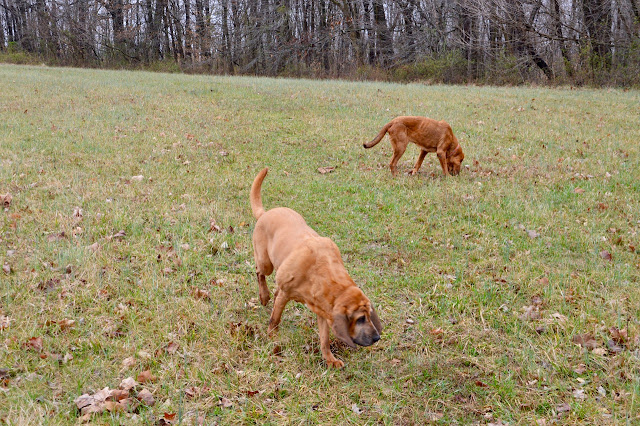 Those dishes and vacuuming are still waiting for me, I'm pretty lazy today. I think I'll play some mahjong and make a few more trips outside.