The Hounds Asked If Spring Is Really Here 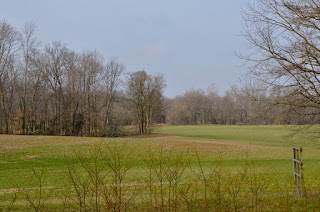 I needed a break today from spending so much time outside, it's that nice. So I guess it's time for a little update on nothing in particular.

It really does make a difference to my mental state to be able to open the door first thing in the morning to let the hounds outside and not be hit with a blast of freezing air.

I am not a fan of the winter months but I try my best to find something good in them and get through the best I can. Having another mild winter definitely helped. With the warmer weather, there are more birds on the ground when we first open the door. That means Sadie starts off her day with a full out sprint from one step out the door to the yard chasing away any birds in her area. 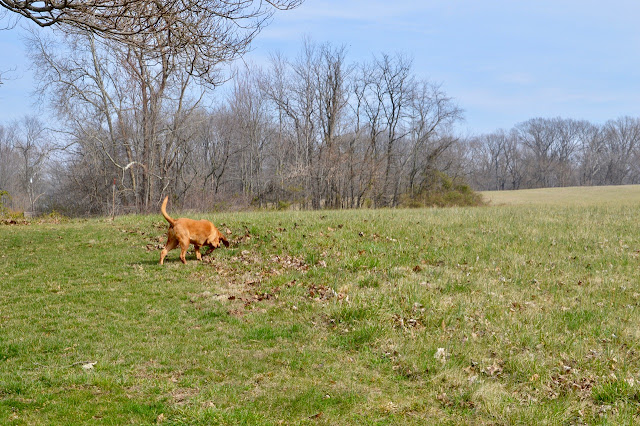 They both wanted to take that first walk early this morning but I had to have at least one cup of coffee. It took some convincing this morning to get them to head back to the house with it being so nice outside so early.

Once that walk started, Sadie was so happy she took off running out into the field and down the edge along the wooded area. It was a rare time that she didn't try to grab my left hand with her mouth to lead me to the field, like she usually does. 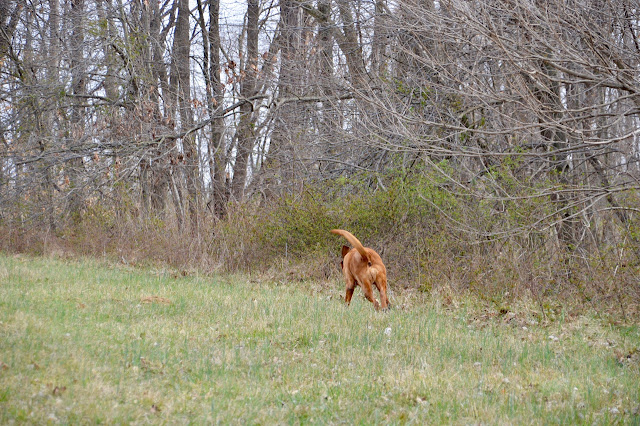 The plan with Stella was once again, 'escort' her past the first turn and then let her do whatever she wanted. I am feeding her a lot more kibble per meal and I think you can tell she is starting to gain some weight back. I don't know the reason for the loss of weight this winter but she was getting too thin. 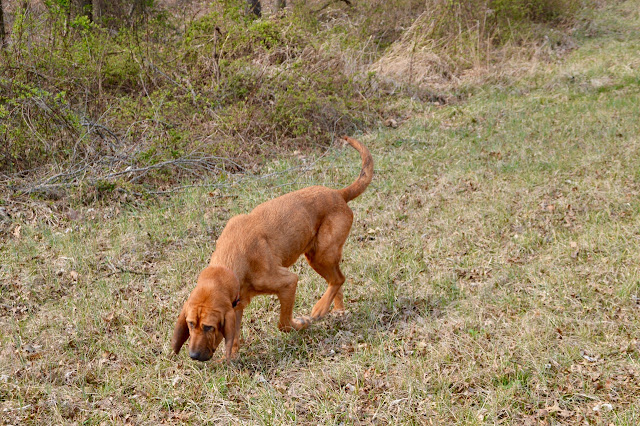 You can almost feel the warmth from the sunshine in this picture and it's still pretty early in the morning when these were taken. 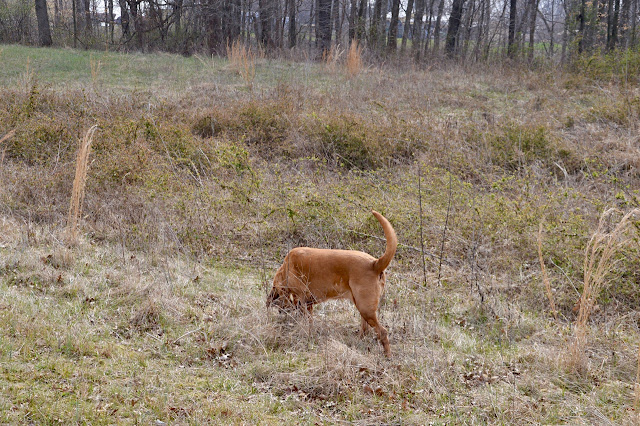 Stella stopped to checkout the same location she stayed in yesterday while Sadie and I walked. She was about to enjoy another feast when I said "come on Stella" and shockingly she followed me and Sadie. 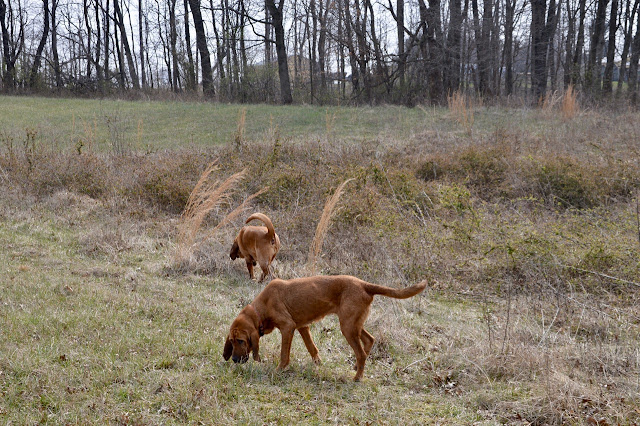 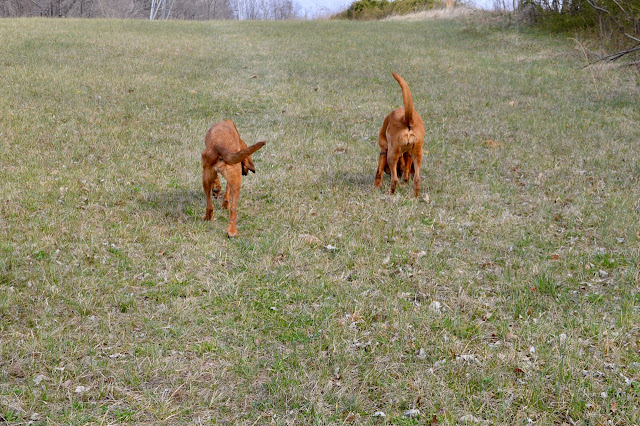 I don't know what it was but every time I called her she followed us today. There were even a couple of times she walked over to look over the small fence into the corn field, then turned around and caught up with us. 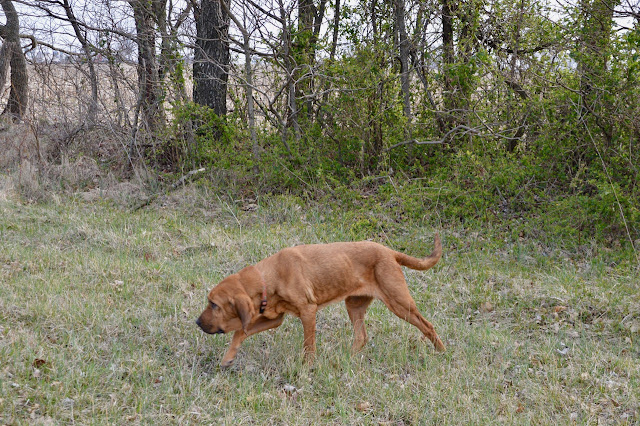 I was somewhat surprised that both of them kept up a pace returning home. I expected them to stay out in the field at different spots with the weather so nice today. They only stopped a couple of times and then trotted toward the house. 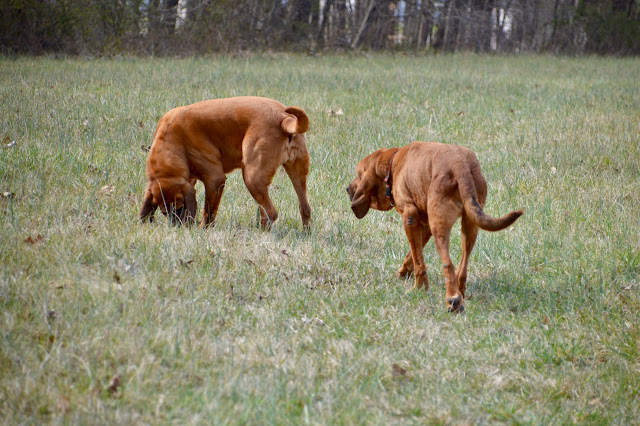 I always say that Heidi has a 70° threshold before she is interested in coming outside for any length of time. Yesterday I was almost certain she was not only going to stay in the yard for a while but might join us on our 2nd walk of the day.

I was wrong ... she had other plans and headed the opposite direction. 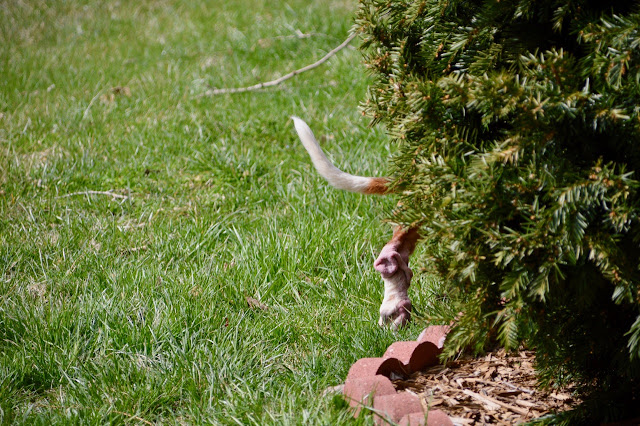 Today was a different story though. Their lunch kibble was fed a little later than the normal time today. I'll discuss the reason why down below at the end of today's post. The older thermometer propped up in the corner of the carport had the needed slightly above 60° ... Weather Bug app was showing 62° ... when Heidi walked straight out the driveway instead of heading for the front yard. 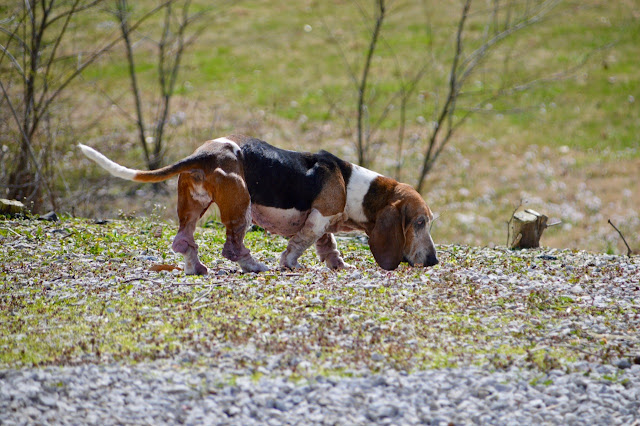 For those that are interested in how much my ground shifts due to the 7 acre field slanting toward the corner of the yard with underground water ... the top of that tree stump to the right of Heidi's head use to be at ground level just a 2-3 years ago.

As far as Heidi I think you can tell she is gaining her weight back. There is new hair growing on all four legs and paws. Her front paws are almost full of hair for the first time in almost 3 years. The edges of her rear shoulders have new hair and more trying to grow. All of those bare spots are very soft and supple skin.

This is the most improvement I have seen with her in 3 years. I am still feeding her the SPORTMiX lamb meal and rice that I posted about a few weeks ago. All the hounds are on the same food. It is manufactured by Earthborn Holistic Pet Food. 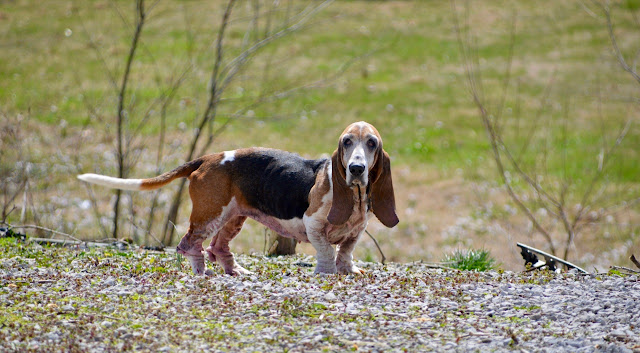 She was headed for a bath and shampoo right after these pictures were taken today. All the hounds will get their nails trimmed and ears cleaned while we are outside. They seem to be more cooperative outside when ears are cleaned and toenails are trimmed rather than trying to do it inside.

As I came back from the mailbox with my camera in hand, Sadie was almost positive we were headed for a walk, so she came running full steam ahead. Stella ... lol ... she was on a different mission. 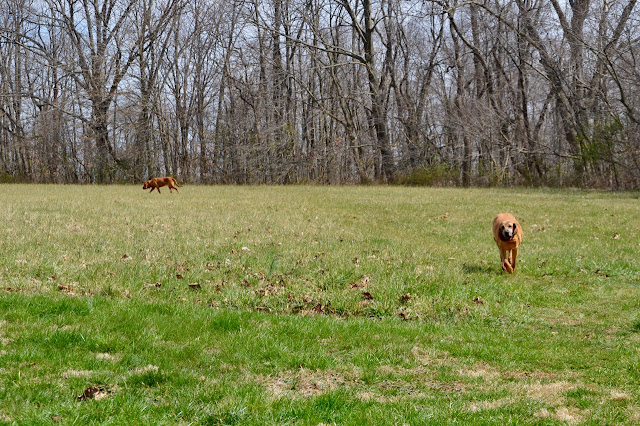 She has that attitude this afternoon where "you guys can walk all you want, I have things to do" 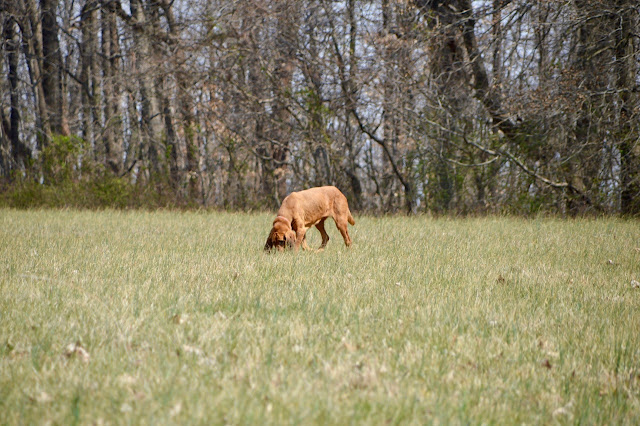 As I walked around the yard today picking up some stray sticks, I thought that I have never seen my yard in worse shape as is in right now. I know the winter just passed but it was a mild winter. I know there will be some damage to the yard but always seems to recover after it is mowed a few times and is hit by the spring rains.

Due to major mole damage in the front yard for the first time in 19 years I am going to apply some grub worm killer at least in the front yard. With the field running into the backyard, it's an impossible war to win against the moles.

Since there is so much damage I am very very tempted to apply so Scotts Turf Builder. I have always hesitated in the past due to the hounds. I know that if I apply that right before it rains I will have to escort them and lead them with a leash to the front yard for 24-48 hours until that Scotts fertilizer is absorbed into the ground.

My neighbors have much nicer, flatter yards than mine and all have the same mole problems that I do. They have not found anything to keep them under control or kill the mole traffic. I have tried everything advertised over the years without much success.

So maybe I'll keep doing what I am doing ... mow and let the spring rains heal the yard.

I am pretty sure the freezing temps killed the grass seed I planted those few days earlier in the month with the temps in the 70's. So I tossed out the last of the grass seed I had today and watered it. There was enough to cover the bare bank in the backyard that I am converting from wild growth to grass that can be mowed and trimmed ground level with the weed eater.

This next part will be of little interest to any reader here if you are not into sports. It is my explanation why the lunch kibble was served a little later than normal, though. Plus an old obsession has come back.

With my team firing their basketball coach only five days ago, social media, basketball fan forums and message boards have seen traffic at an all time high. If you are the owners of those message boards, they are loving it because of all the increase in traffic to their websites. Believe me these fan message boards are popular nationwide for all college teams and are huge money makers. They are probably making about a half a cent per click paid to them by advertisers. Yes ... some huge amounts of money is made when only ONE thread that I am following about the search for a new coach just went past a million visits since last Thursday. That is only one of the many IU fan sites.

So I have been a 'little' pre-occupied following all the rumors, discussions and of course those small tidbits of information by those that have
'inside' sources close to the decision makers. Huge amounts of money are involved, power struggles by rich boosters and/or board of trustees, wanting "their man" to be the next coach.

Needless to say, time passes quickly hitting the refresh button all the time for the latest news. In a matter of minutes a 100 new posts can happen or 100 new tweets can happen from the few people that I follow on Twitter.

The old obsession I spoke of that has returned is the amount of time I spend in 3-4 different IU sports forums reading the latest. I use to pay $9.95 per month for what they call premium information but stopped that a few years ago. Can you imagine the amount of money made at $9.95 per month and thousands of paying members?

Through all of this excitement the hound's schedule does not change from any other day. They get their 2, now 3 walks per day with great weather, they get fed twice per day with an occasional 'treat' if I need to bribe them.

Yet, today time flew just a little faster than normal while on the IU message boards. Since I did not have the warning of Stella howling for food, I lost track of time and the lunchtime kibble was served an hour late. I couldn't believe that Stella and Heidi had slept through lunch.

The hounds must be happy this afternoon because they are all in a deep sleep and it's quiet enough in here to 'hear a pin drop'. Oh and yes I thrilled that the past IU coach was fired last Thursday. A nice man but a poor coach in my opinion.

I am concluding this by saying that Spring is OFFICIALLY here in 'the tropics' of southern Indiana ... now back to those message boards.
at March 21, 2017