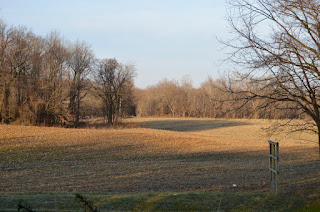 When the rain did not start last night I took a look at the forecast to see the storm had moved to Wednesday. The hounds and I are going to be seeing temps in the 70's but in exchange for that it could rain 6 of the next 7 days starting tomorrow.

IF that were to happen, the weather forecasts would have to be accurate and I would have a yard to mow on the first day of sunshine after the rains stopped.


Yesterday afternoon turned out to be great weather, a lot of wind ... we did nothing. Not even a walk.

Yet, there was 'a historical event' taking place. Heidi always goes to the door when she wants to go outside and for the past many months those trips have been few and only long enough to go outside and dump her tanks in the front yard. 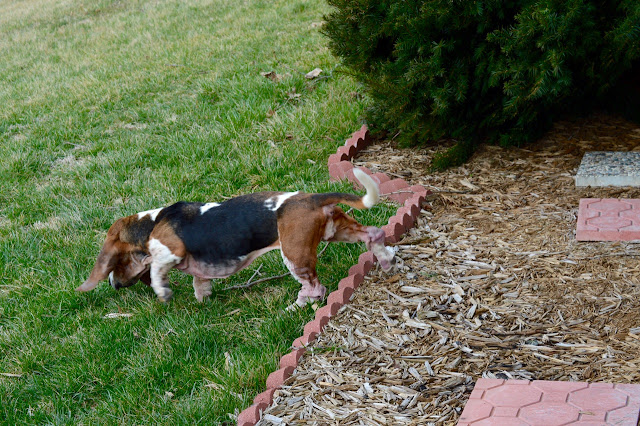 Yesterday I was in shock. Instead of turning right after she walked passed the parked cars, she took off left and headed for the backyard ... on her own!! I was thinking she was headed for the field or least the middle of the backyard. As I walked further in front of her to capture this 'historic event' on my camera ... I turned ... started to raise my camera to my eye ... SHE WAS GONE! 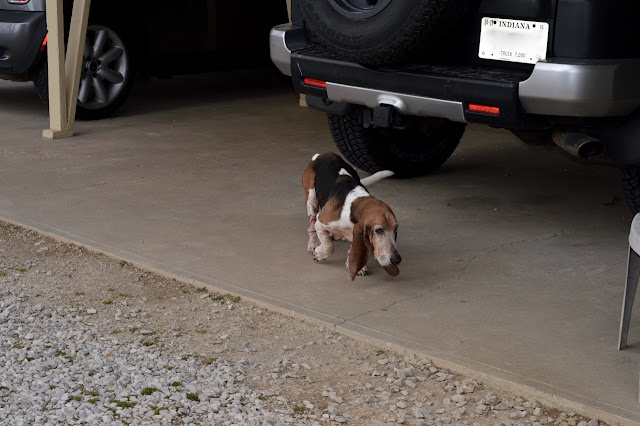 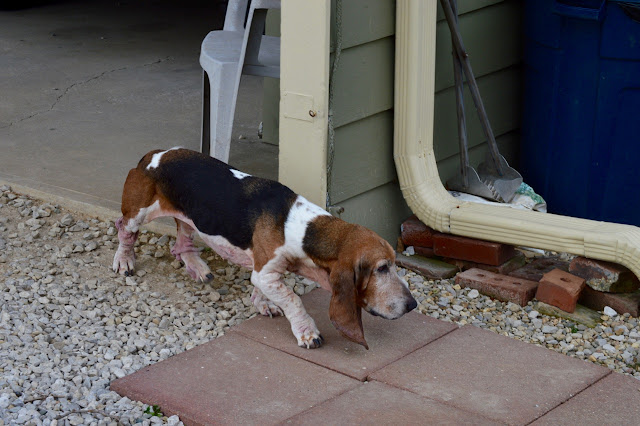 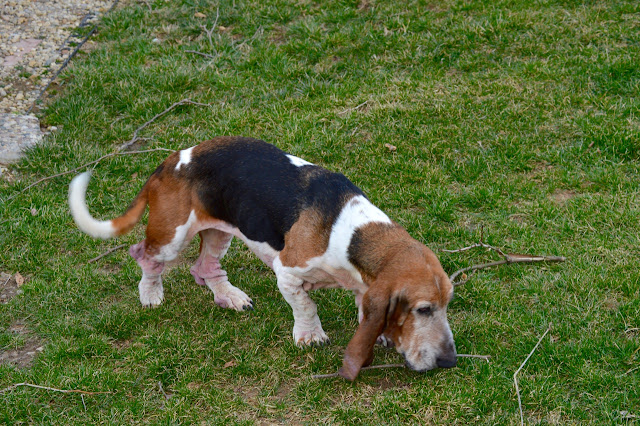 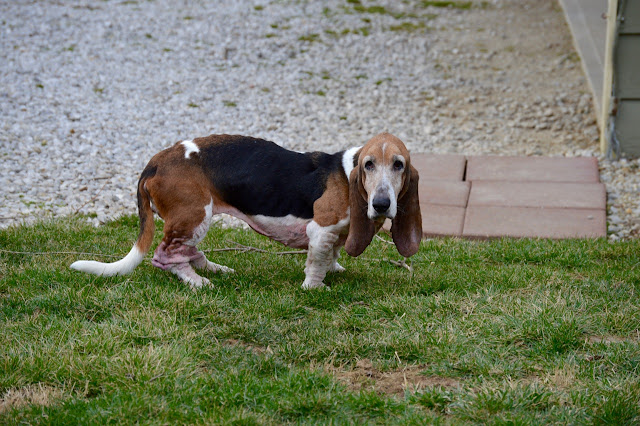 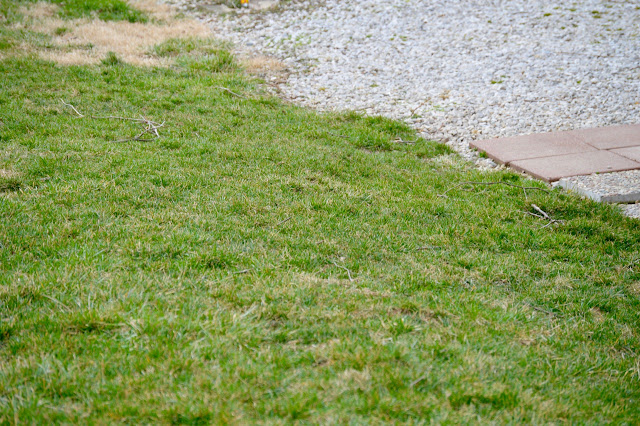 By the time I turned the corner of the house she was at the door to go back inside and headed for her favorite chair, to sleep an afternoon of great weather away ... she had seen enough. I have no explanation what took place there. 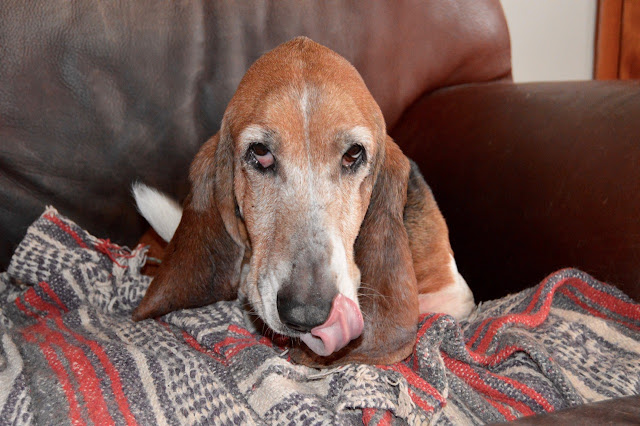 After a night of high winds from the S/SW we woke to sunny skies and 58° that felt a lot warmer. After a cup of coffee for me and an hour nap for the hounds we took off for the first walk of the day a little after 9am. I had been out earlier this morning and it was warm enough to wear camping shorts and a t-shirt. It's hard to believe that winter passed through with very little snow and warm temps.

I have a lot of these type of sticks to pick up throughout the yard after a windy day yesterday. They are from that Sycamore tree that I like so much. (joke) 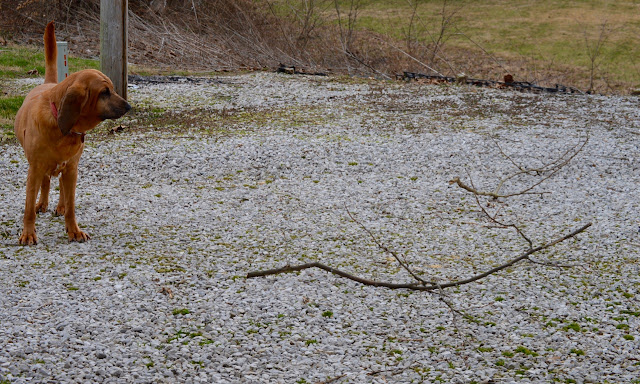 Looking at the spreadsheet I use to track my monthly utility bill and use ... it was the warmest winter since 1997, the year that I moved into this house.

After the hounds had to sprint to me yesterday, they did not veer off much this morning. I could tell their searching and exploration was not as intense as yesterday. As we turned the corner Sadie thought she would check out the edge of that gully again but as I yelled her name she turned and came running back to the path. 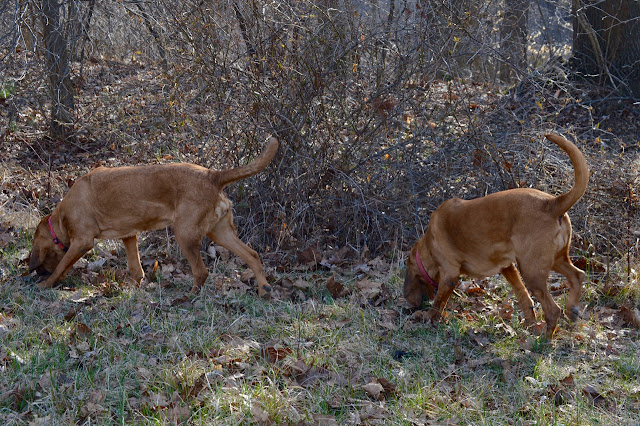 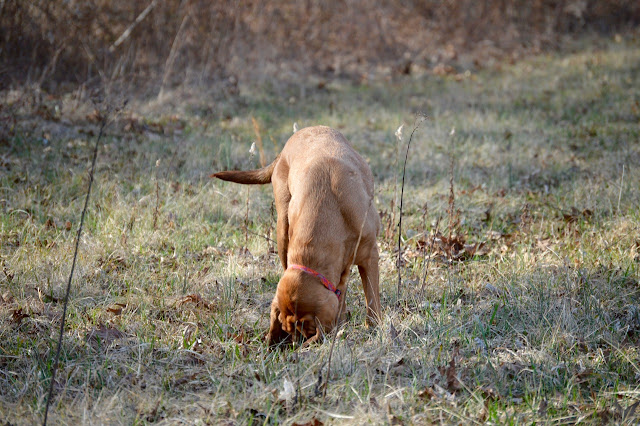 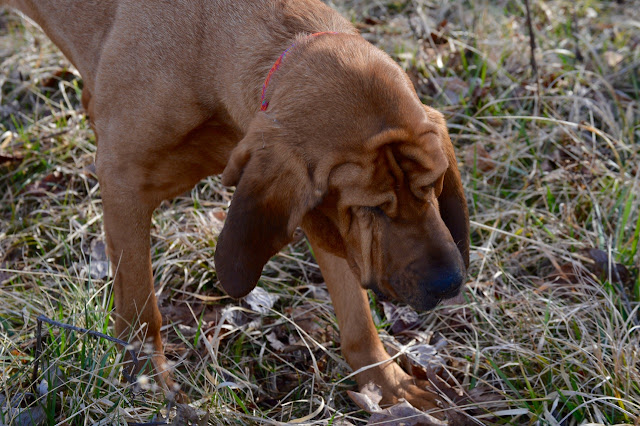 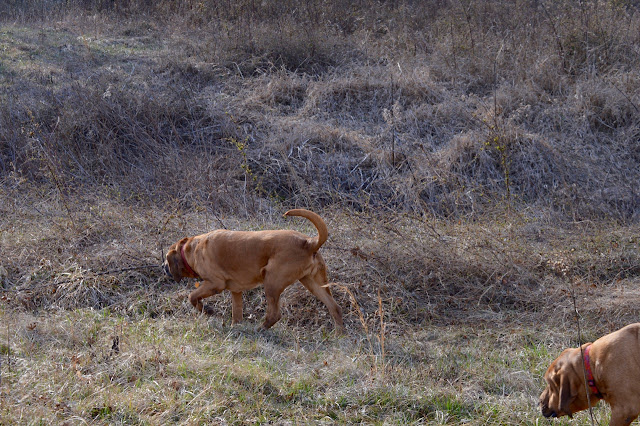 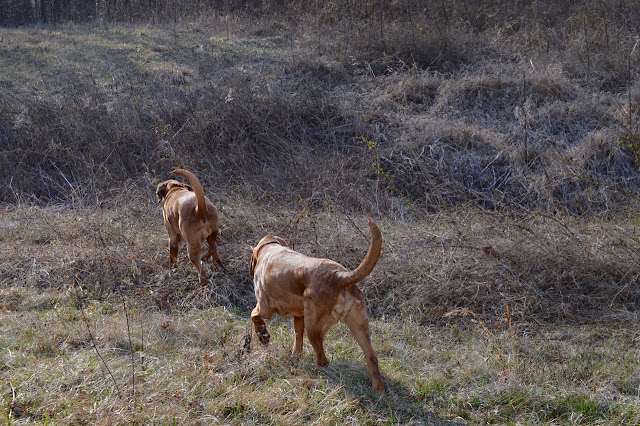 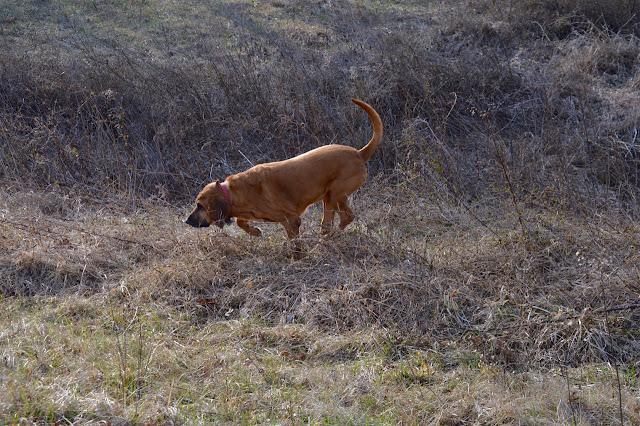 Stella did not trot to her normal spot to the right corner of the field but stayed ahead of me on the path. In fact both of them turned on the path to go home before I even got to that spot. I knew they would probably revisit the area from yesterday that they wouldn't leave until they didn't see me in their sight lines. They did veer that way until I called their name. 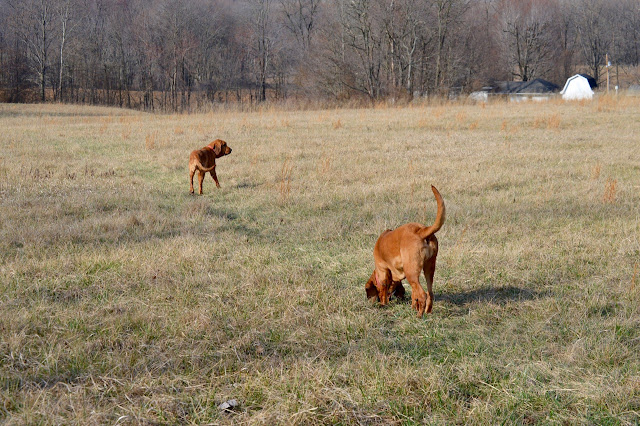 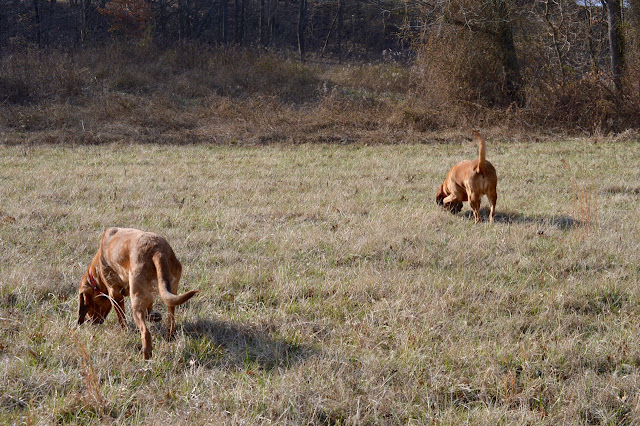 Stella was not real happy that she had to leave and head back to the path to walk home. In protest she lagged behind all the way home and walked as slow as she could. If I didn't know any better I thought I could hear her feet dragging in the field as she walked. Back inside they were all asleep within minutes. 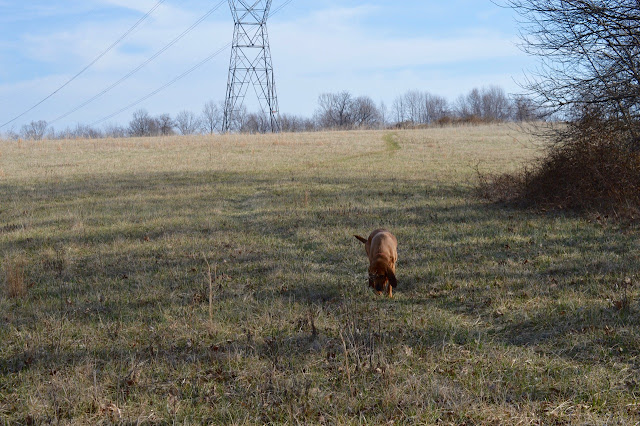 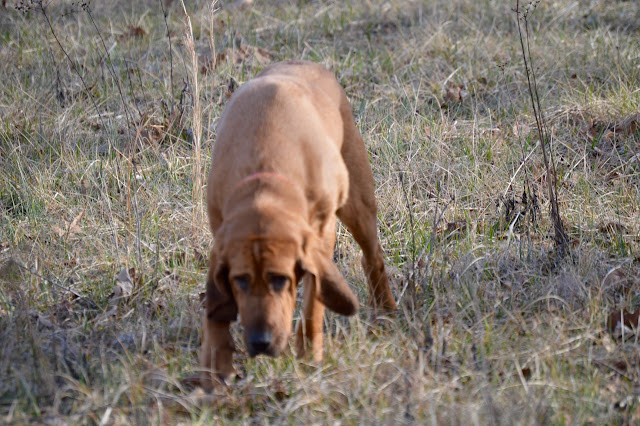 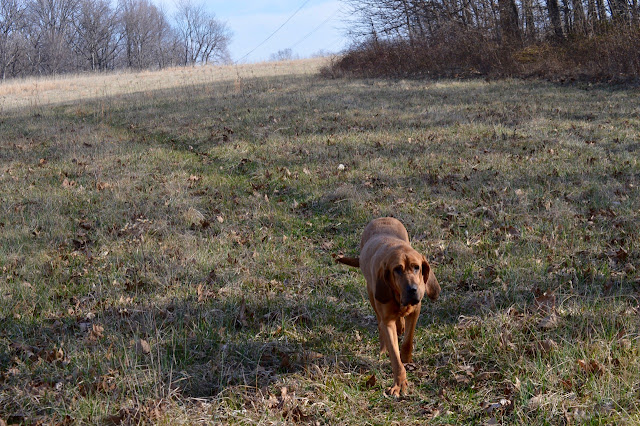 I am at a crossroads with my transfer of programs taped on my DVR to DVD disc. The DVDs are not in HD quality. They have good quality picture but after being used to watching everything in HD these past few years it's hard to go back to a Standard Definition picture. So do I continue to clear off the other 65% of the DVR hard drive. That is roughly 65 hours of ballgames that are left on the current DVR.

Or do I take the DirecTv offer of keeping that DVR as a 2nd machine and leave 65% of the hard drive filled with HD quality viewing? A backup on DVDs are nice because I would lose everything if the DVR ever broke. I hate writing that because it's been years since that happened and has not happened on this current DVR.

On the other hand, I can keep this machine and close out my 2016 college basketball season by taping them to the current DVR ... then have DirecTv install their upgraded receiver that has a 1Tb of hard drive space. Since I do not keep every movie or every game or tv show, that I record to the DVR, that amount of hard drive memory would last me for years.

To give you an idea, on my current DVR I have games that I taped in 2012 ... that's already 4 years ago. With 4x as much memory, I could have over a decade of ballgames, Indy500 races and a few movies saved in HD quality. For that, it might be worth paying DirecTv an extra $6 per month for that 2nd machine .... risking it all, that the machine would never break. Or ... maybe with new technology I would have unlimited data and storage on the cloud, where I would only need a basic receiver.

Decisions ... decisions ... such as life in retirement while living in 'the tropics' of Southern Indiana ... I am doing yard work this afternoon.