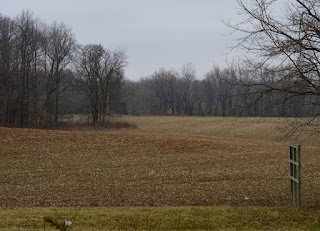 It's going to be a beautiful Friday here in 'the tropics' today. Our whole schedule started a coupe of hours later than normal. The skies were overcast when the first photo of the field across the highway was taken from my door step. I am not sure why but I always like having that same photo each day on the left margin to start the blog.

In it's separate folder it's nice to see the changes  in those photos from day to day, month to month or annually. It will be interesting to see how the spring operates after such a mild winter here.

I was reading last night about ways to shore up my bank along the driveway. In one spot it is borderline dangerous. A serious weather event (straight line winds) that happened in June 2008 started the demise of the bank along he drive. Those winds pulled up large trees all the way down the bank like weeds and spread them across my frontyard, through the fence.

Add in the issue of a 6 year fight with the neighbor on property lines. He couldn't read and understand even with help from my lawyer. A few springs ago I wake up on a Saturday morning to the sound of chainsaws. The neighbor had decided after his chat with my lawyer that he would hire some of his friends that needed money to cut down every tree that was left on MY bank ... plus pull out any roots.

Talking to him about erosion that would take place after removing those trees from my bank were way above his level of intelligence. Luckily this *$^@##(N moved in July 2014. Add in the fact that the local utility company decided about three years ago they would institute their right of public domain and cut all the large trees on MY bank under THEIR power lines to MY house .. so it's safe to say over the last 8 years MY bank as gone from a 125' bank with solid large trees to keep the bank intact ... has changed drastically. I have some work to do with large riprap rock this spring and maybe summer. 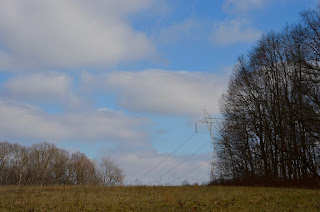 Anyway the hounds and I were a couple of hours behind schedule today. That means they will have lunch a couple of hours later than normal. It doesn't matter to them as all of them are sound to sleep after their morning walk. Except Heidi. She is asleep but refuses to walk until the temps get warmer than 42°.

The skies turned blue and I could tell from the start that Stella's nose was working a little better than normal.

How? When her nose is working better than normal ... she ignores my calls to "come on".

Then she wanted to walk into the wooded area that is off limits to both bloodhounds because of the huge drop off into a valley about 10' into the wooded area. She did come when I called for her to get out of there ... then Sadie and her trotted down along their path. A few times Stella headed to the middle of the field based on what her nose was telling her. She had a lot of interests today while walking. 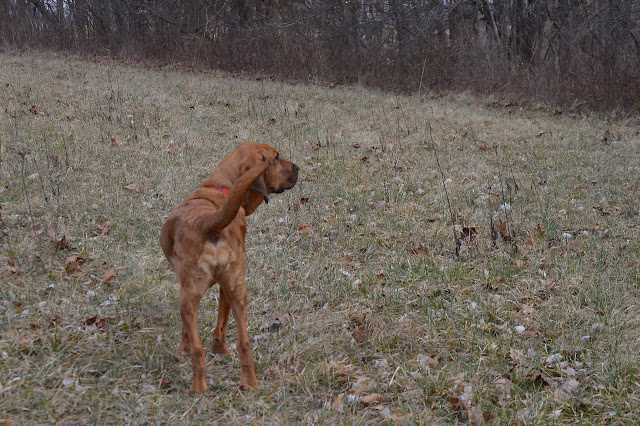 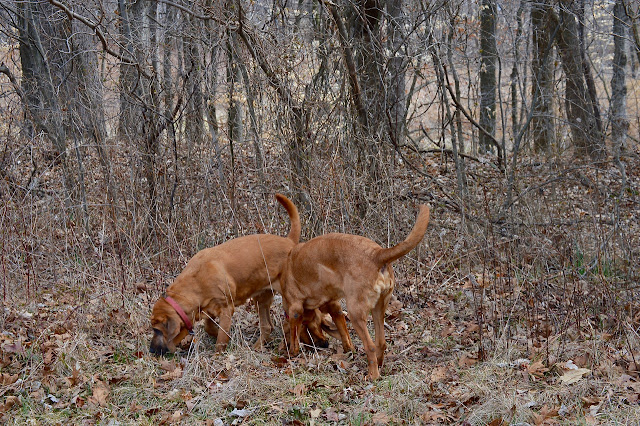 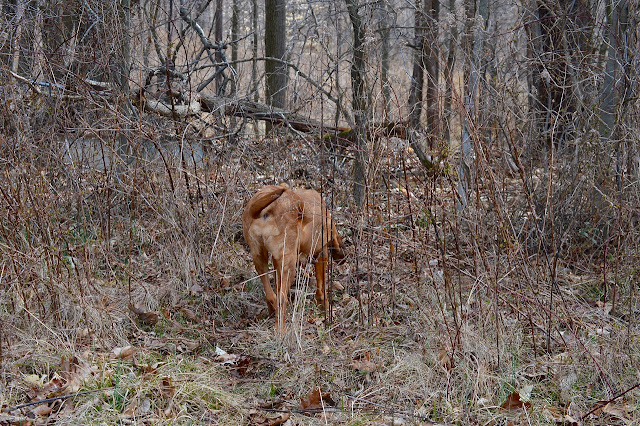 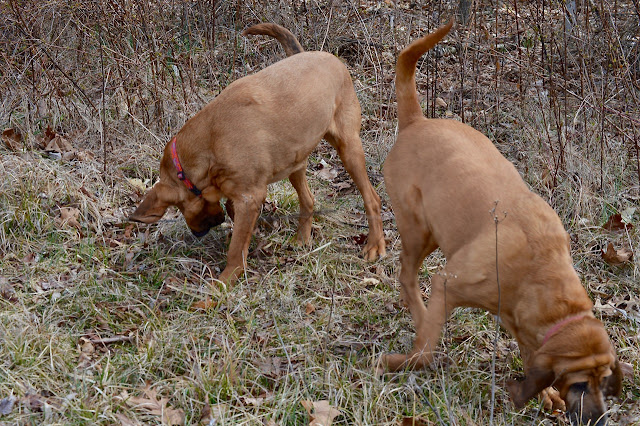 She went even further than normal to the right side of this field than she normally does. Once again my Nikon D3200 decided not to work during the times she was sprinting towards Sadie and I to get caught up. I was able to catch her running on just one photo. 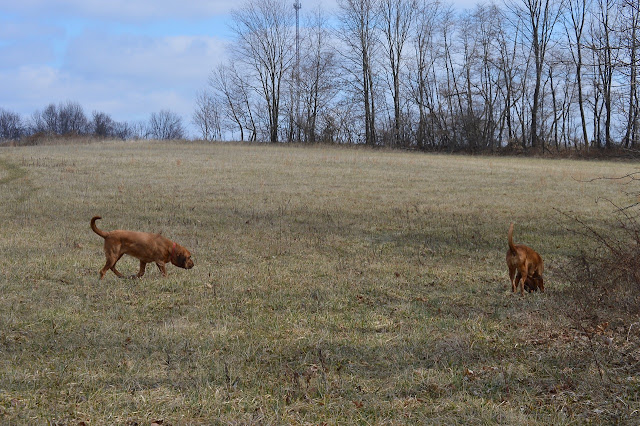 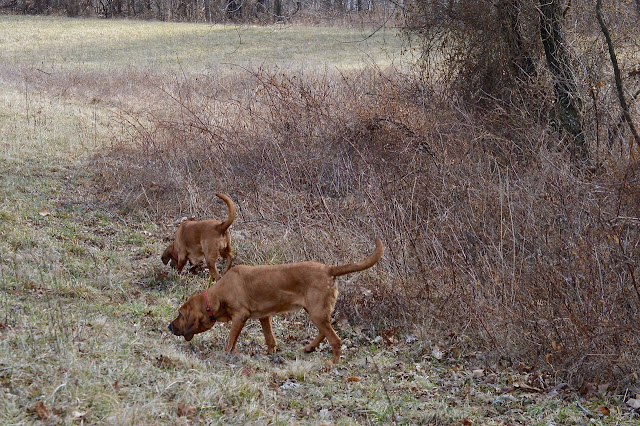 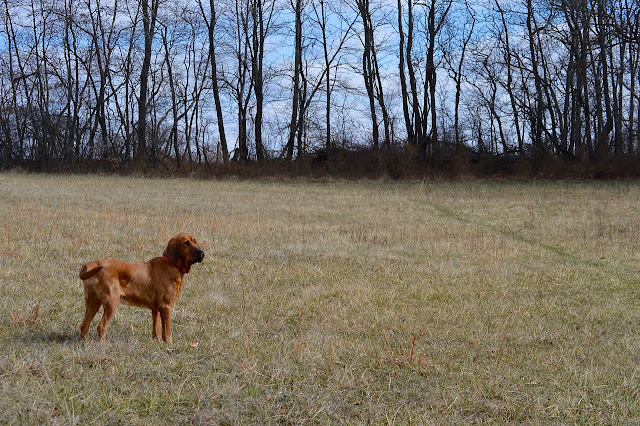 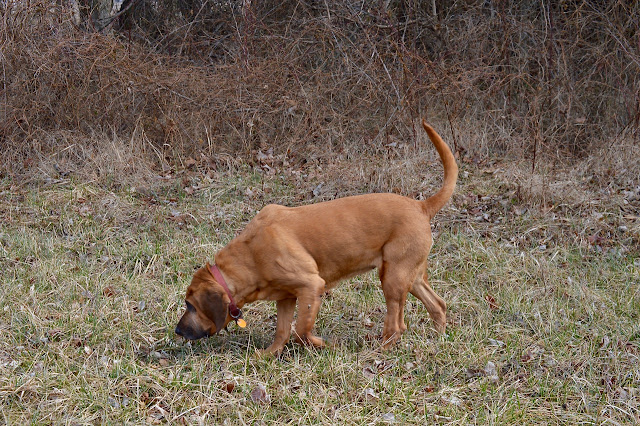 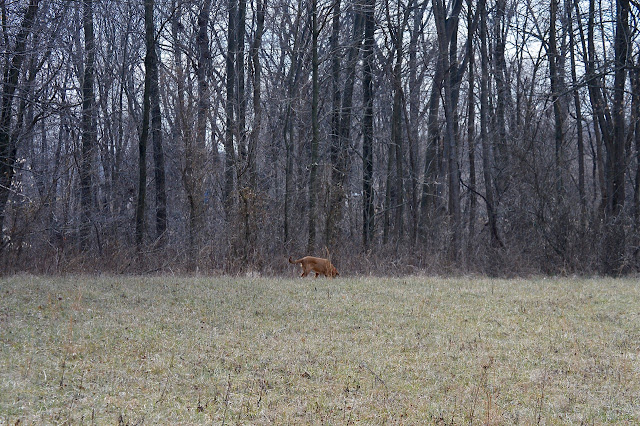 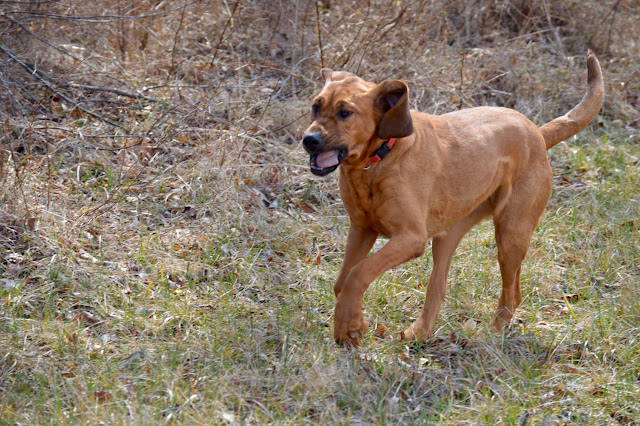 With both hounds really giving the area along the fence line extra attention I knew I was going to have to watch Stella as we approached the turn to go home. This fenced area is where deer jump the fence and sprint through that field toward those barns. The times I have seen them do that, they are usually in groups of 5-8 deer. So you can see both hounds have a real interest in the area today. 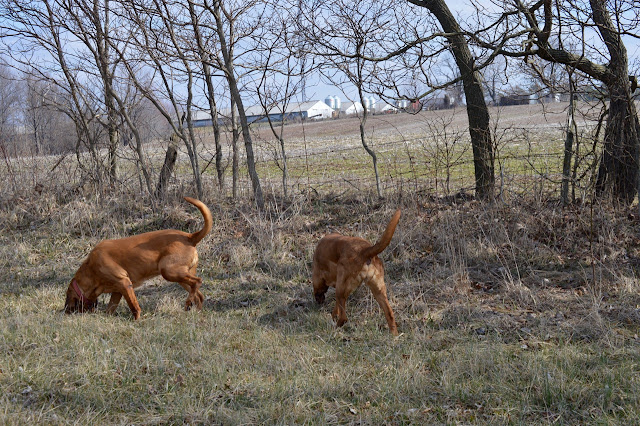 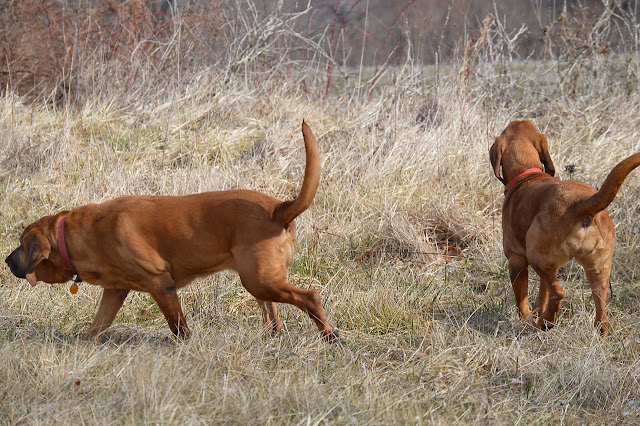 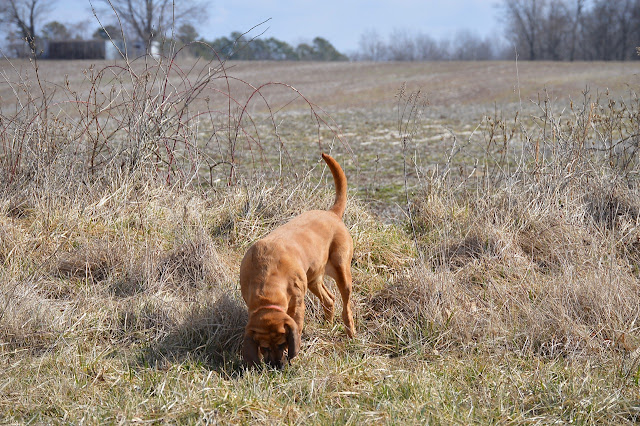 As I turned the corner to go home, I looked to see Stella's nose in the air and her attention pointing to the "no fly zone". I could tell she wanted to go back and almost did until I yelled 'no' to her. She didn't run to me immediately ... she stopped a couple of times to look back to the area she wanted to visit again. 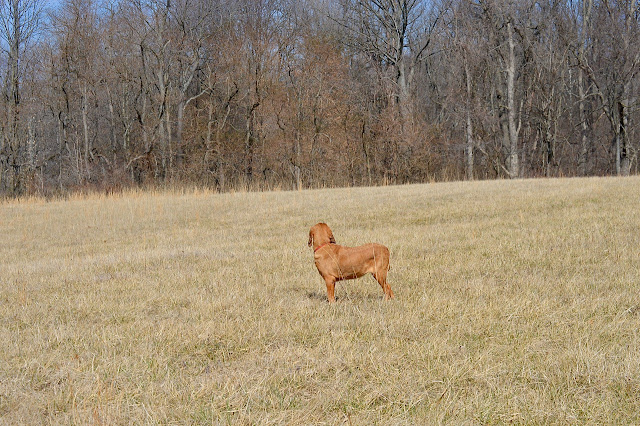 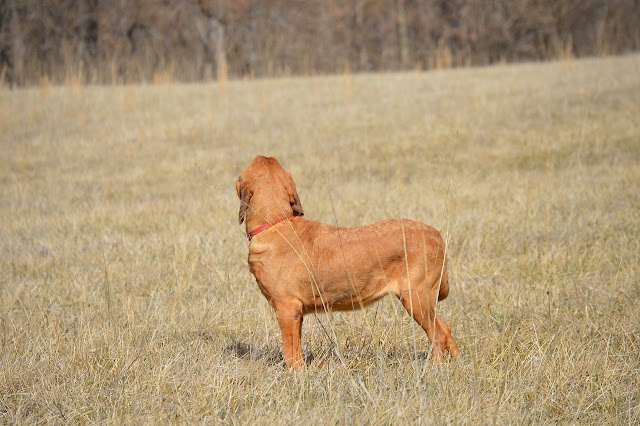 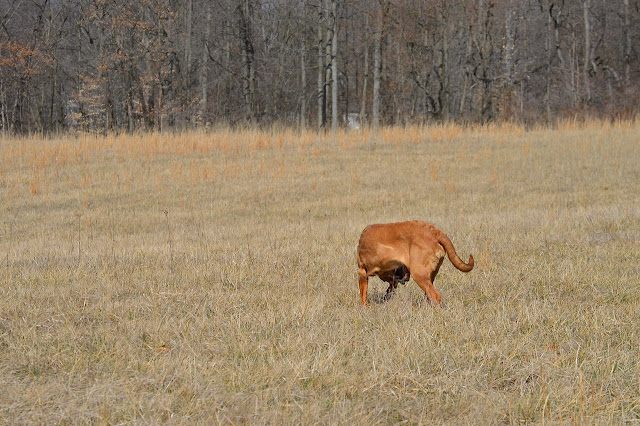 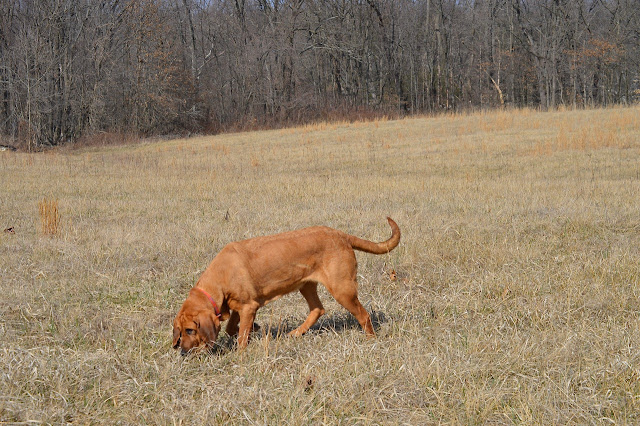 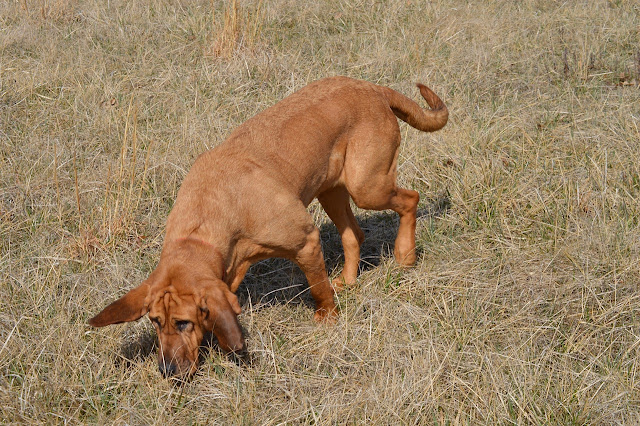 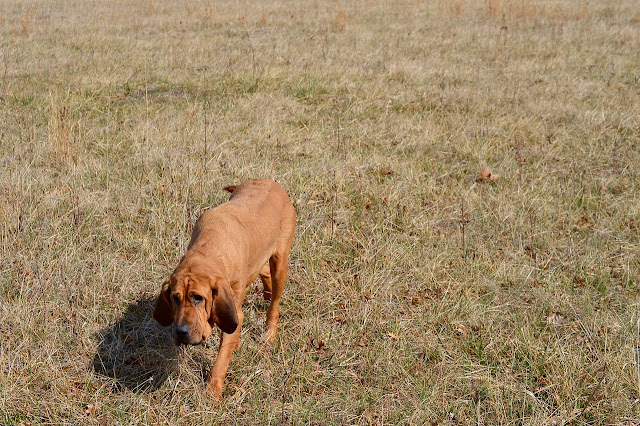 She gave in and came back to join Sadie and I but she didn't seem happy about it.

Between the camera not working all the time, plus the amount of time both hounds walked close to me, we didn't take a lot of photos on the way back. You will see though they both explore the ground from the field through the back yard all the way up to the house ... their noses miss nothing. 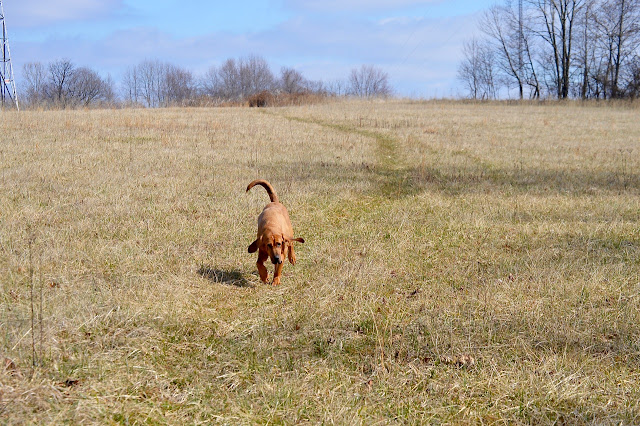 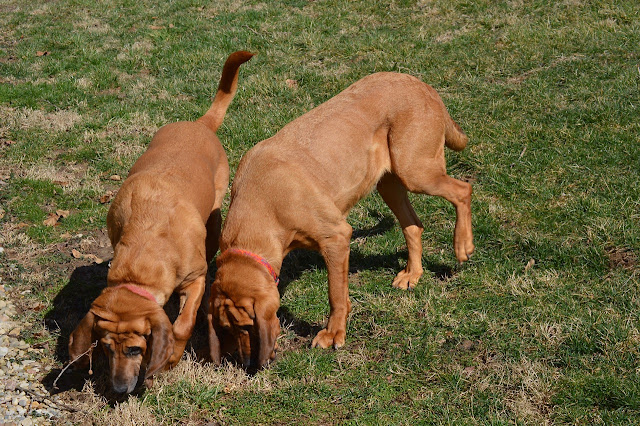 After I watch a game of basketball at 2:30pm today, I am going to hook up a brand new recorder that will record all the ballgames and the last 3 Indy500's I have on my DVR to DVD discs. I need to clear off that DVR not only for space on the hard drive but I am also considering getting a Directv DVR upgrade to their Genie model, that has 1Tb of memory. I bought this recorder a few years ago after a huge power surge destroyed my other recorder. I was able to find and replace the exact same model.

I don't keep all my recordings but a few things I would like to keep and have in the past on DVR for future viewing.

We might fit in an afternoon walk today since the weather is nice. Heidi's skin is looking the best ever this morning, at least the best it has in the past 18 months. So I hope to get some photos of her skin improvement, if I can ever talk her out of sleeping all day today.