We had a little different schedule today based on my schedule ... called sleep. For some reason I was up really late last night (this morning) and when the hounds howled around 7:30am to wake me to let them outside, I knew then I was not up for the day. I didn't even feel like starting coffee. They went outside only for a short time because they love eating breakfast first thing in the morning. After that breakfast, recently they like to go back outside just long enough to dump their tanks ... then to sleep. 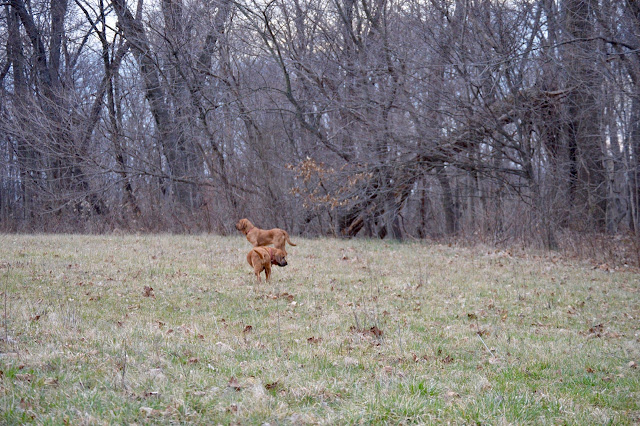 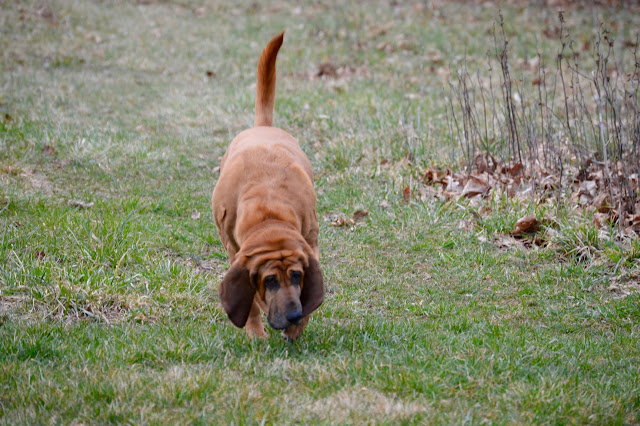 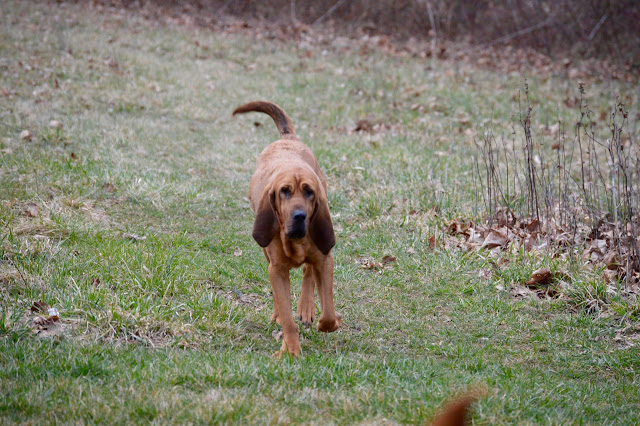 I decided today I would follow their schedule and go back to sleep. So that almost threw the whole day's activities off but you can do that in a moment's notice when you are retired ... it's a beautiful thing. I see now it's 12:22pm, already past their lunch time but none of the hounds are begging to be fed, not even Heidi. She is up exploring around the house, but Sadie and Stella are passed out after their late morning walk today. They had a pretty long run that I will describe later.

Like I said the other day, we might take the exact same path on the daily walk but every walk is different. That proved to be the case today.  This deer hoof print had something to do with it. 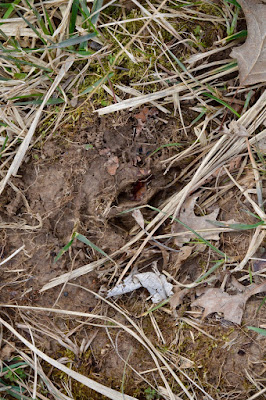 Consequently they had their noses to the ground and rarely lifted their heads. For me it was nice, no jacket required, camera was working most of the time but not all the time ... but enough that I decided there was not a need to buy a new camera today -- although I am very very tempted. When their tails are up and curled you can bet their 'radar' is locked in on something good. 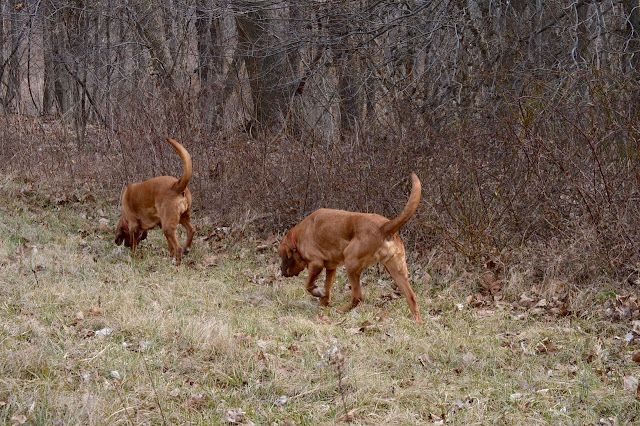 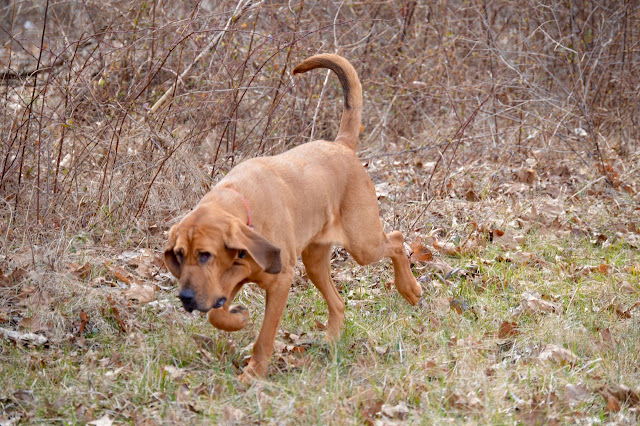 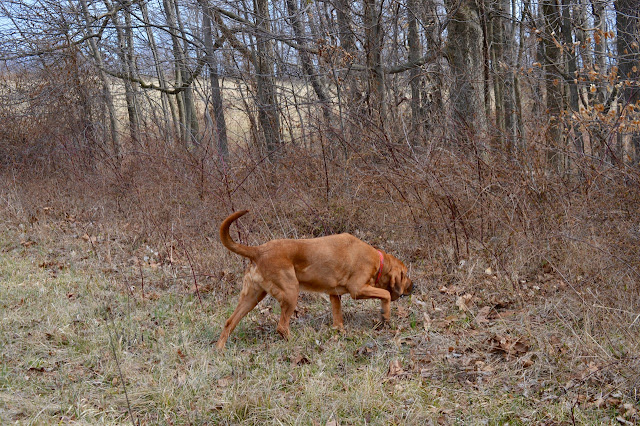 With it being a warm 58° and a strong wind out of the southwest - the first thing that changed was Sadie was about to continue walking over the edge down into the gully. It wasn't the drop off part of the edge but where deer walk down into the gully. It is hard to see any distinctive points in the area photo but here it is. She came running after I yelled "no" multiple times. 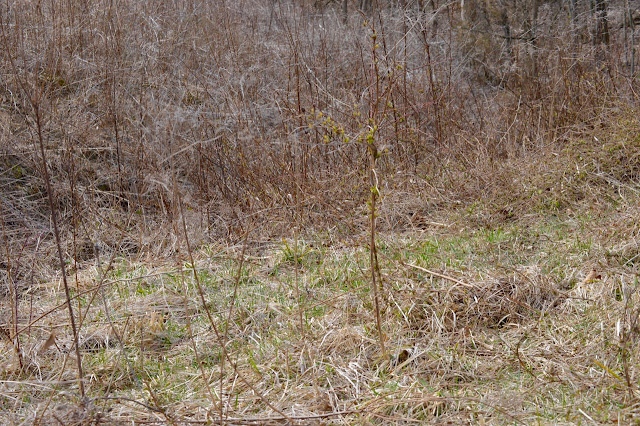 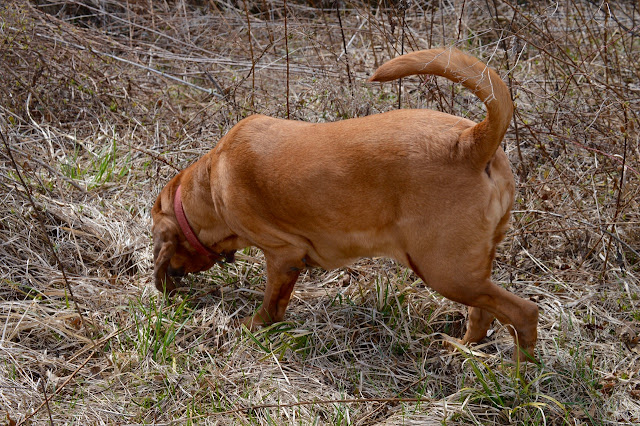 After Sadie trotted back into the field from where she almost took off, Stella wanted to remind her she couldn't do that. 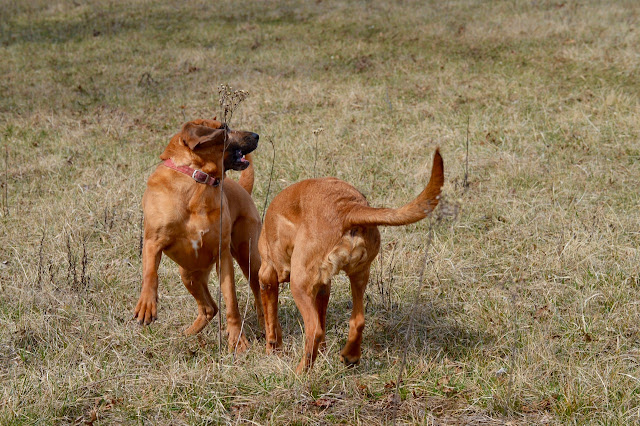 Stella kind of checked out her spot from yesterday where they had found something to eat ... nothing there so she moved up to the brush line. She wasn't there long either because she didn't want Sadie getting anything while she was away. 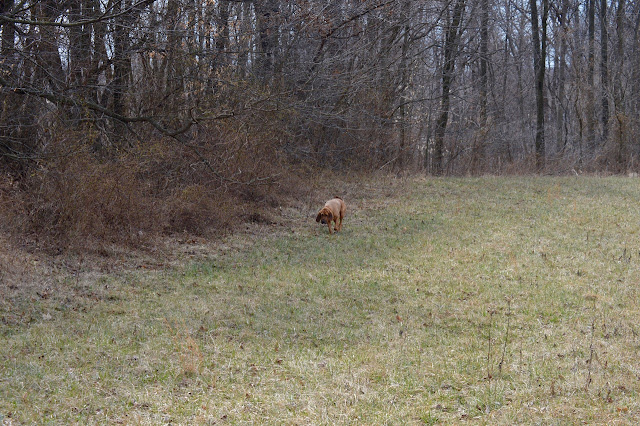 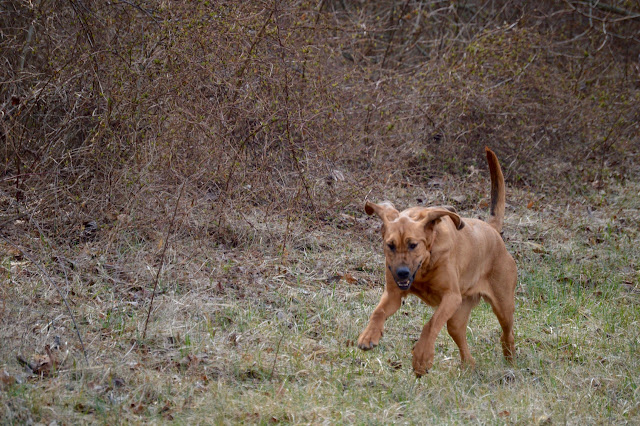 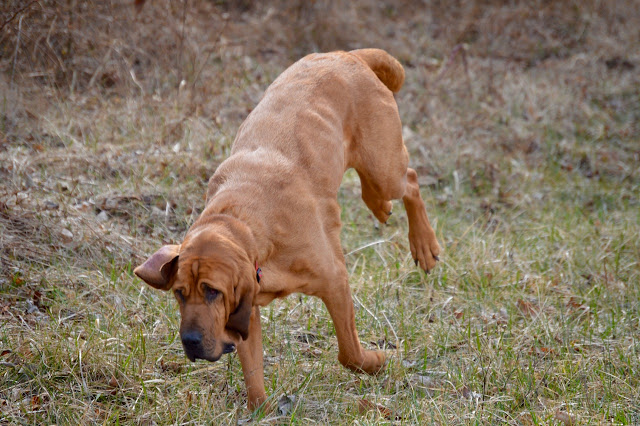 As we continued down the path to return home, Sadie took off left because something has raised her interest, Stella followed. I am not sure what they found, nor did I want to know what they found because they were both chowing down something. It must have been good because they were not concerned I was walking away from them. Even if I was getting further away ... they continued to enjoy their new treasure. 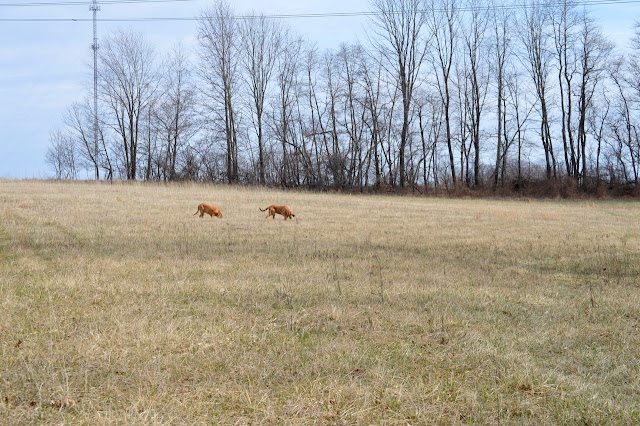 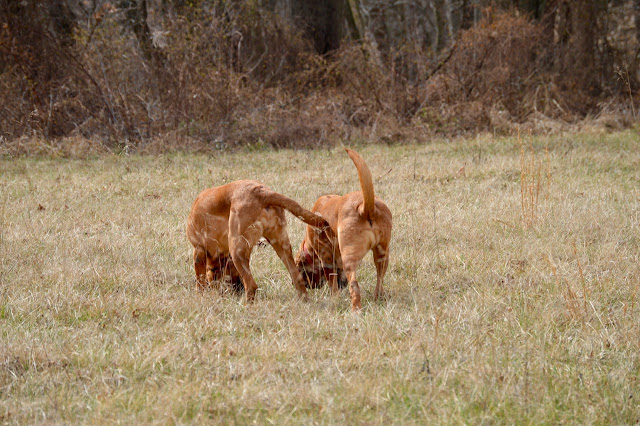 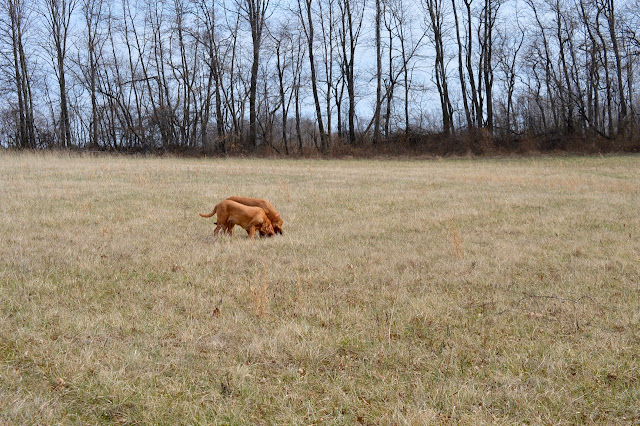 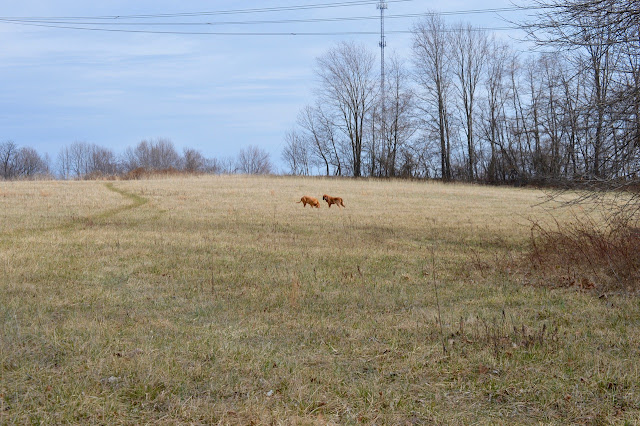 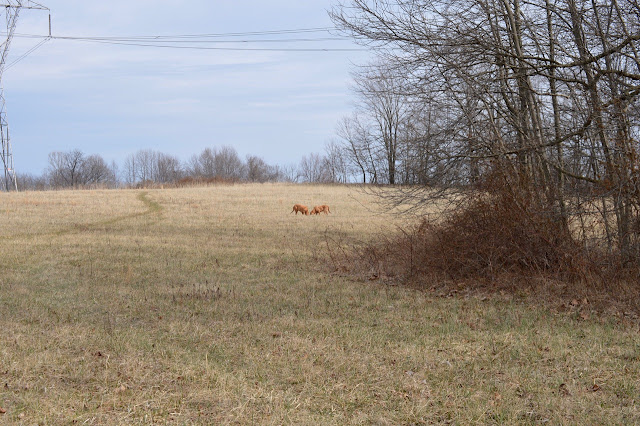 They glanced up a few times to see if I was still around ... then the last time they glanced up I wasn't there. I was out of their sight line by choice because I wanted to see what they would do. The camera worked 90% of the time as I tried to catch them running toward me. I don't know what they were thinking but looking up and not seeing me must have changed their minds about what they had found. I was well past the 'corner' where we turn and they were sprinting to catch up for me. 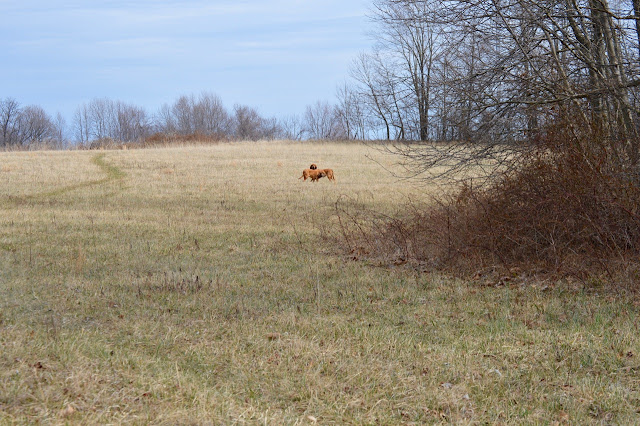 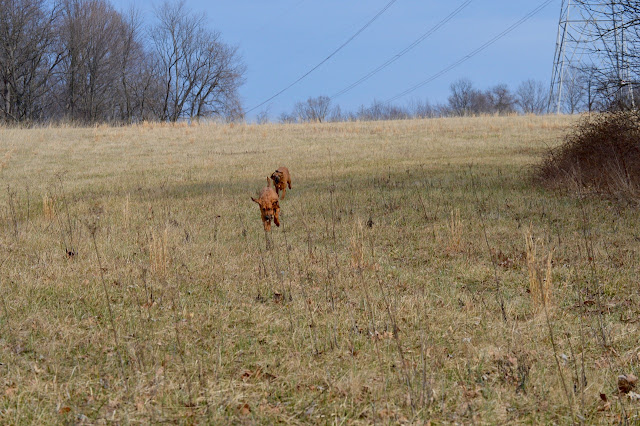 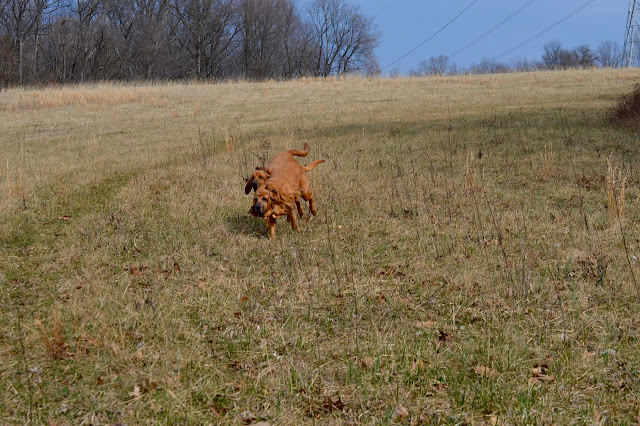 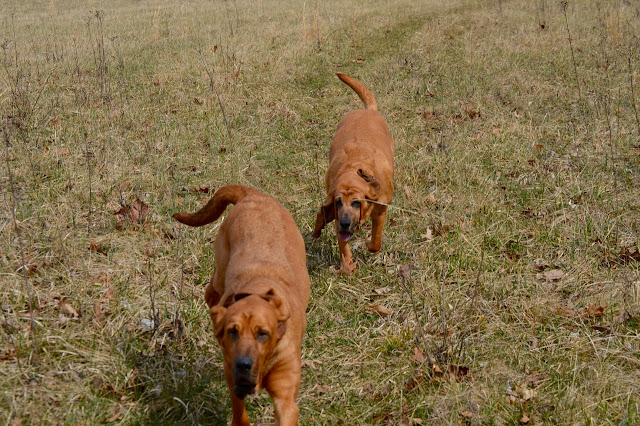 It could be the reason that Stella 'walked it in' at the end of the walk. 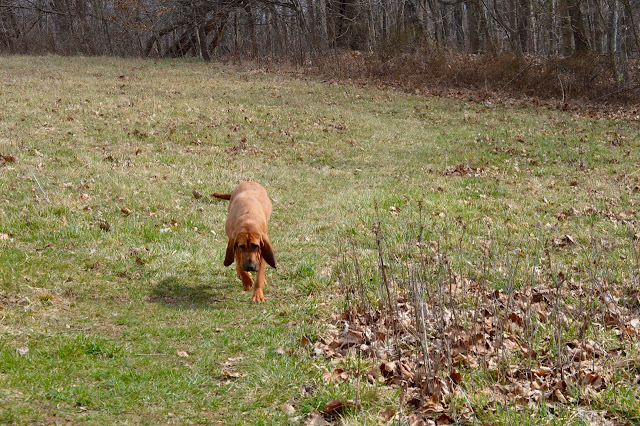 With heavy rain in tomorrow's forecast, predicting 2-3 inches, walks and photos may be few and far between until the field's surface/ground dry out enough to keep us from getting muddy on our walks. That rain is suppose to start tonight sometime and those 2-3 inches will get 'the tropics' of Southern Indiana back to where it should be in total rain accumulation for this time of year. After the sun hits the yard after all of that rain I am expecting to mow the yard for the first time in 2016. Grub worm killer will be spread later this afternoon so the rain can do it's thing.

My taping of games, movies and Indy500 races onto DVDs from my DirecTv DVR is going great. I do test each disc for playback after each recording before I delete the program from my DVD. I have only been doing that test on my tv to see if the recording is good. Today I loaded those recorded DVDs into my iMac to see if they would play on the computer and on a different device from which it was taped ... years ago I had a problem with that. Today was all good. You cannot record in HD but the picture quality of the SD video was pretty good ... at least good enough that there were no complaints from me.

That still raises the question, do I really need their updated DVR to replace the one I have that works but has a lot less memory available on the hard drive. I am finding out that I have a lot of programs to convert just on the DVR that I have now with the smaller memory capacity. Do I really need a terabyte worth of hard drive?

With the warm weather today, the hounds and I will be in and out many times today. I hope to get Heidi out into the field after lunch and let her walk around and at least see how see reacts. Her appetite is still huge, water consumption normal, sleeping normal, and starts her day with sprinting around the living room after breakfast. With the clean blood work report, I continue to see her as normal with a skinning frame that may never regain those 15-16 pounds.

Spring is here in 'the tropics' of Southern Indiana.