With the temperatures were close to 70° I decided I was going to head out to do a little yard work with the hounds after their lunch. Before the rains show up I wanted to rake up what was left of old vines, roots, weeds, etc. I am unsure what I am going to do with this area.

This is the area in question. To the right of it is the area I cleared last April. It looked about the same as this area. I planted some grass and see this spring that it has grown pretty well considering I did not follow the rule book in starting a new yard. Notice the concrete blocks that were left or put on those position to prevent ground erosion. I am not sure that just planting grass is going to prevent future erosion. 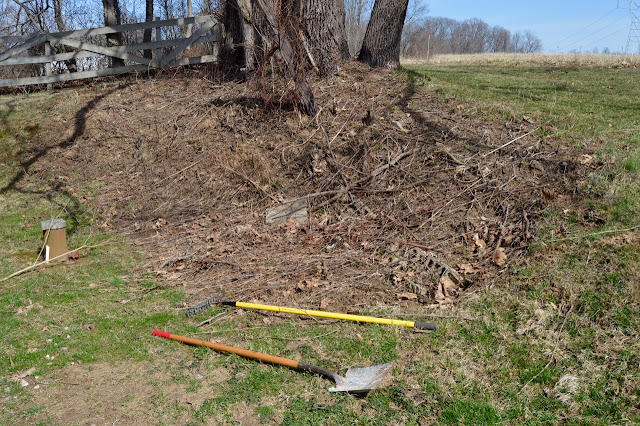 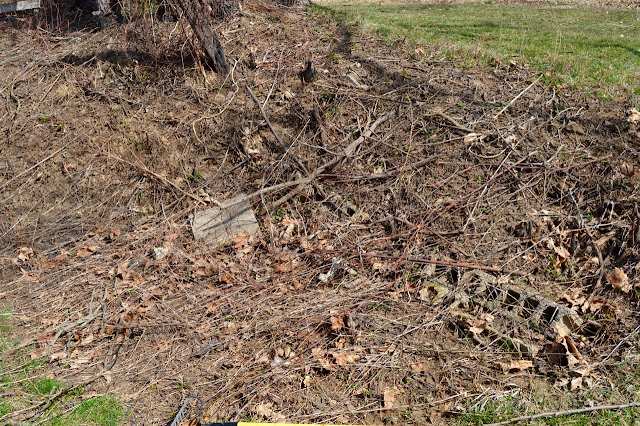 I was able to pull up a lot of this with a good rake. I divided it into two halves with plans to burn in two different piles. 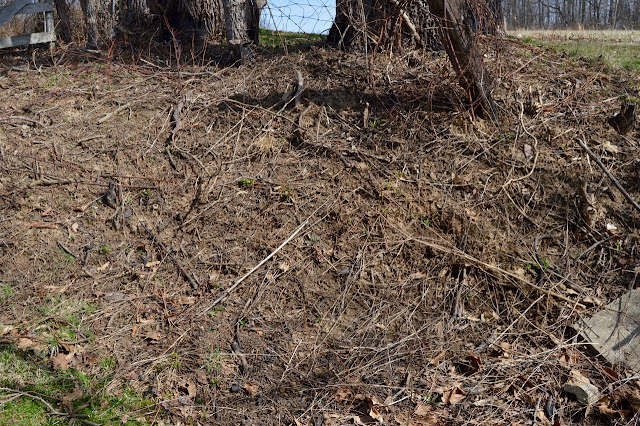 With the wind so strong, coming from the right (south) I was concerned about burning in this area because if the fire was to hop that fence I would catch the field on fire and not enough water equipment to be able to put it out. So I raked it into piles and then carried down the hill to my small burn pile. 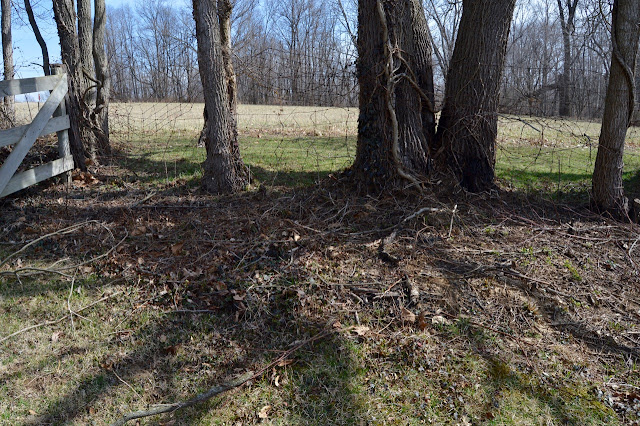 Sadie and Stella were taking their positions to supervise. This would be Stella's first spring in supervising yard work ... much different than her experience last fall in burning leaves. 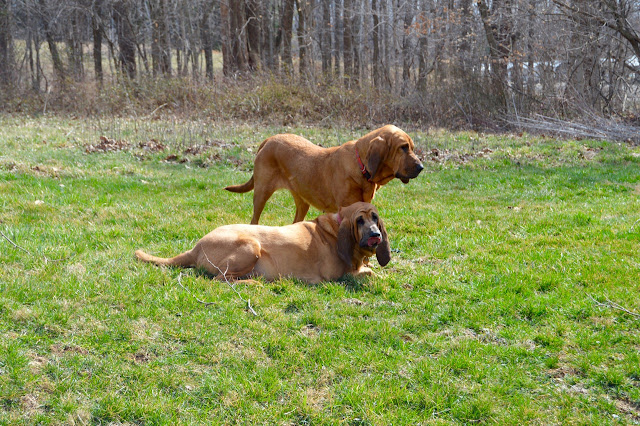 This was going to be my small burn pile. This area cleaned up pretty fast. 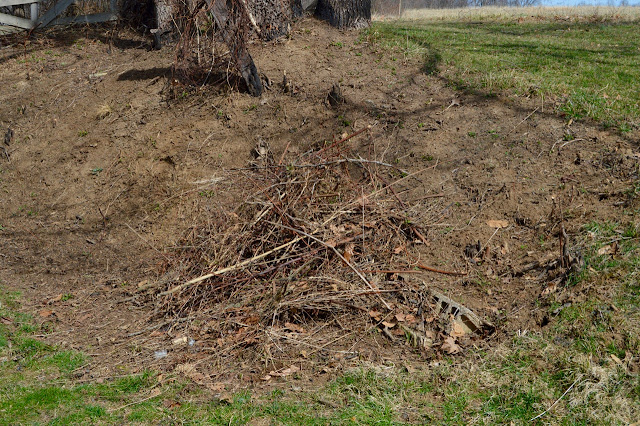 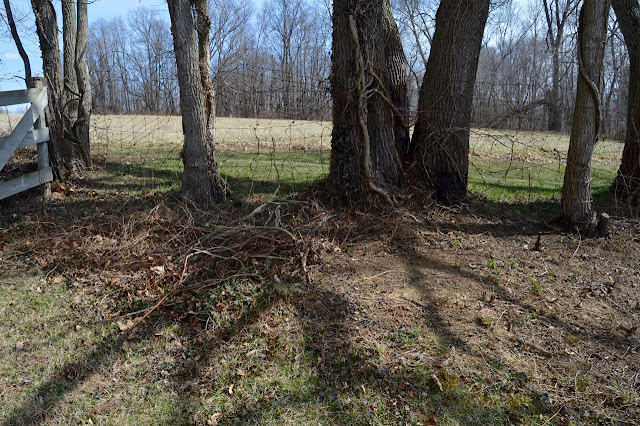 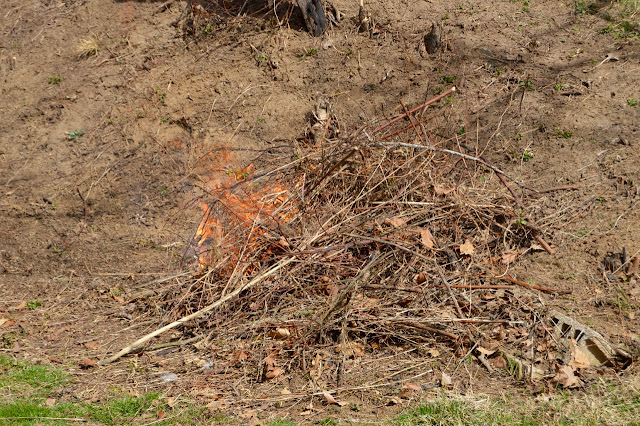 Heidi is not really into supervising. She was more interested in exploring by herself. It was good to see that she came outside on her own and did not need to be carried, talked into or bribed to come outside. 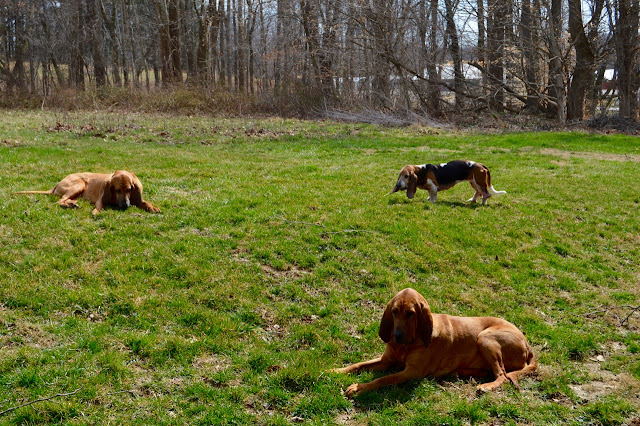 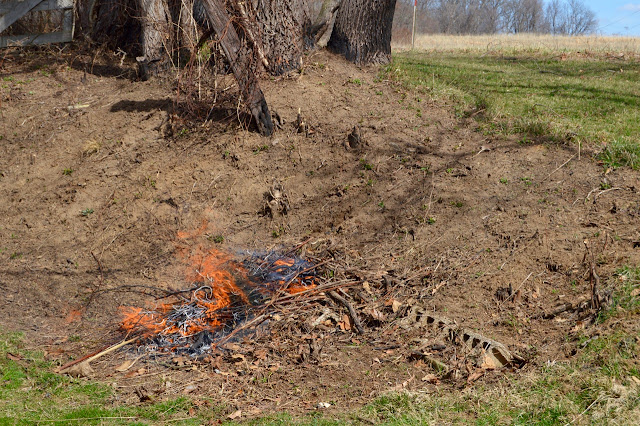 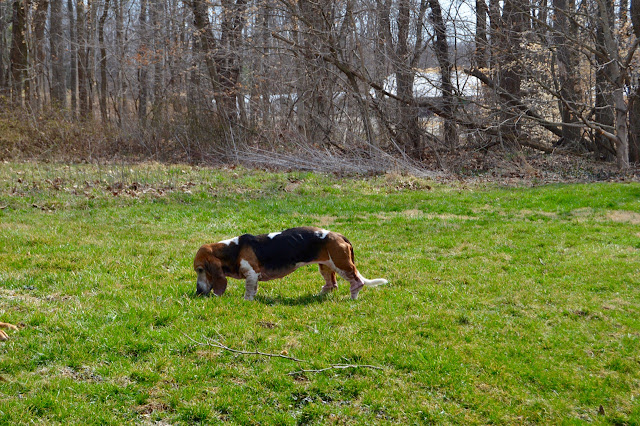 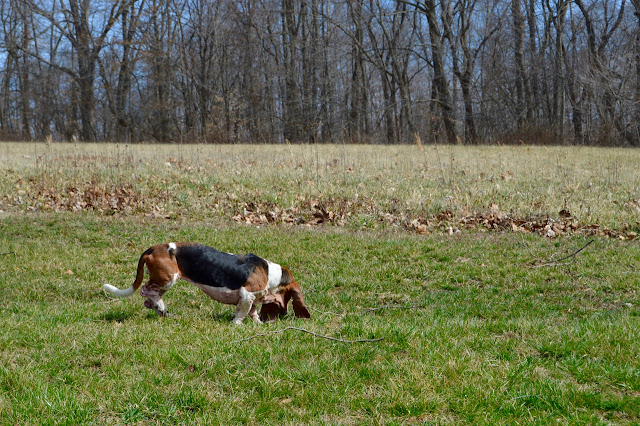 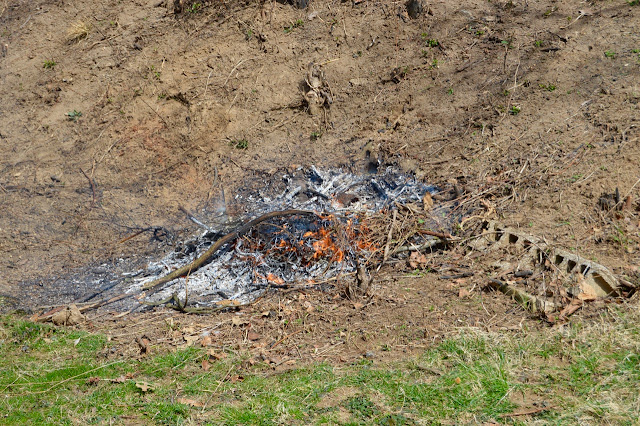 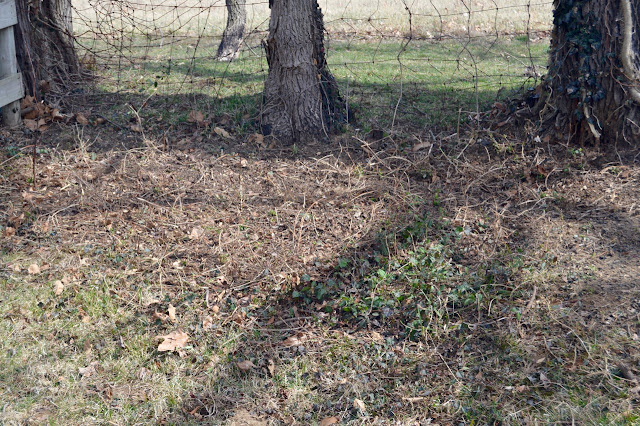 When I had finally carried all of the brush to be burned, I wanted to straighten that old fence and then take the barbed wire and get all of the stray strands into that roll. As old as it is, I was surprised it didn't fall apart. There were some brittle pieces but overall the wire stayed intact. 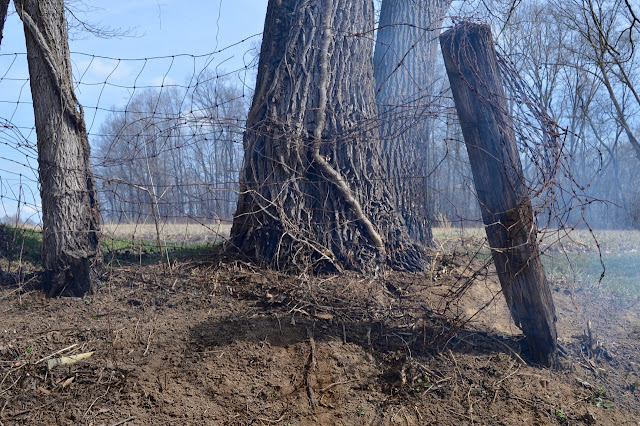 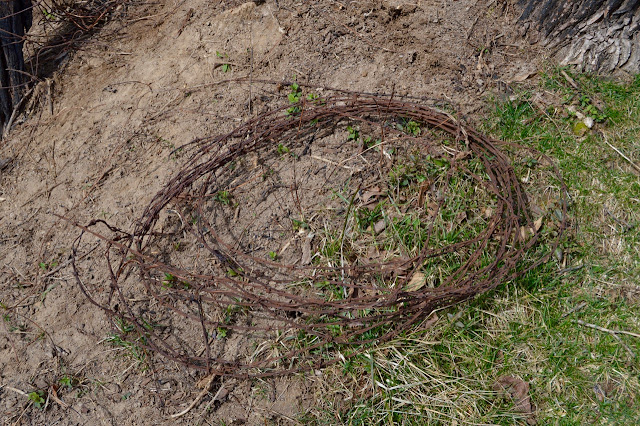 Until I took that roll of wire off of the post I had not noticed the old railroad tie in the post. I relocated it and used it to hang the roll of barbed wire on. 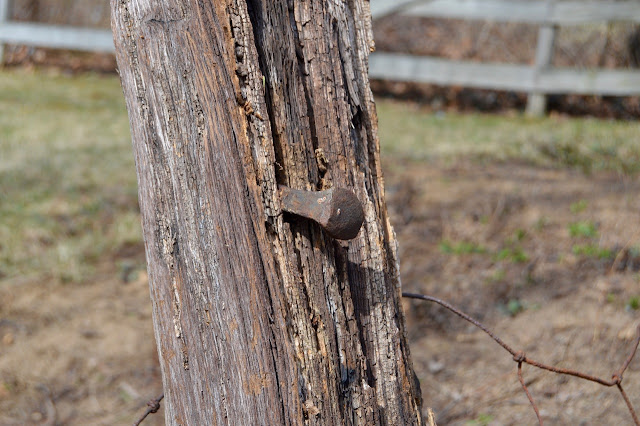 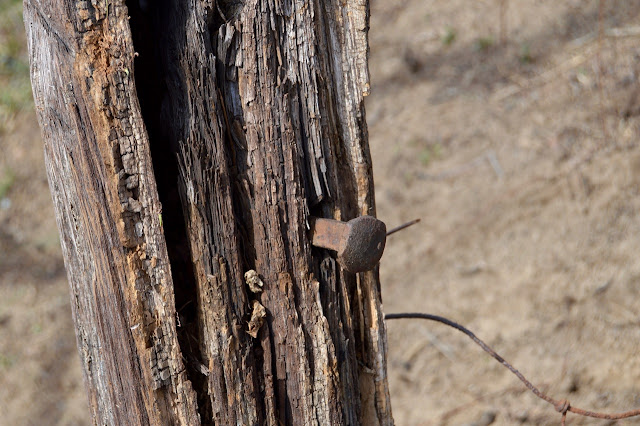 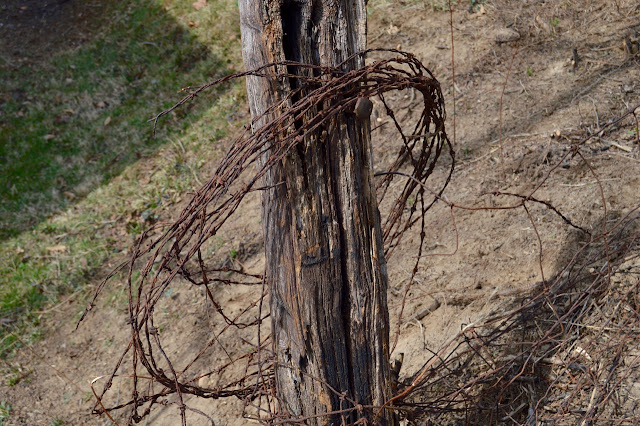 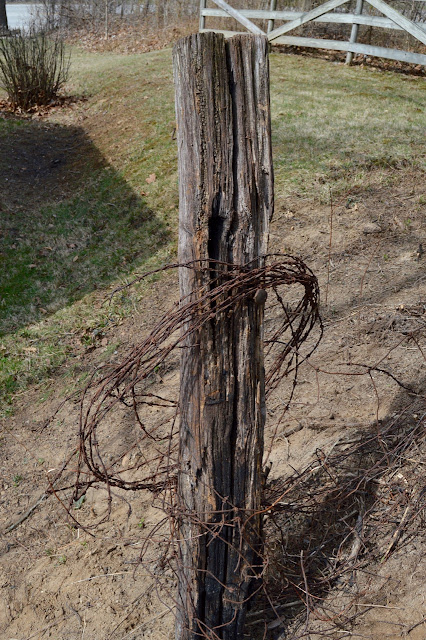 Sadie and Stella was so tired of supervising, Sadie decided to break off sticks 1" at a time and Stella was more interested in napping. Every time I grabbed the camera to catch her sleeping, she would wake up and watch me. 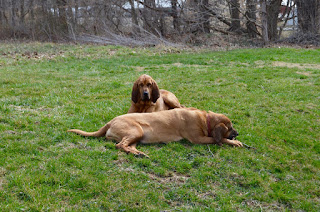 Of course after all of that hard work that lasted less than an hour and our first project for 2016 ... a siesta was scheduled for later in the afternoon. Temps will be in the 70's for the next few days but it will be constant rain.

Spring is off to a good start here in 'the tropics' of Southern Indiana.