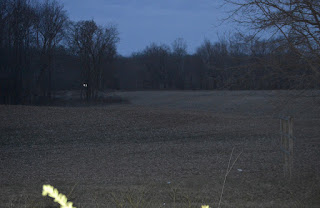 It was great to sleep with the window open. I seem to sleep much more soundly that way. You hear all the sounds of the night, like sleeping in a tent. With that, the hounds woke up before daybreak and wanted to start the day. After about 15 minutes of not being able to get back to sleep, I decided it was time to start the day also. Consequently you can see the camera flash in this first photo.

The hounds didn't do anything outside their normal routine. While they are outside I am inside pouring out the portions of breakfast kibble. While they eat I am making my coffee. They finish eating and head back to nap while I am on the computer catching up reading the updated blogs on my blogroll on the left sidebar. 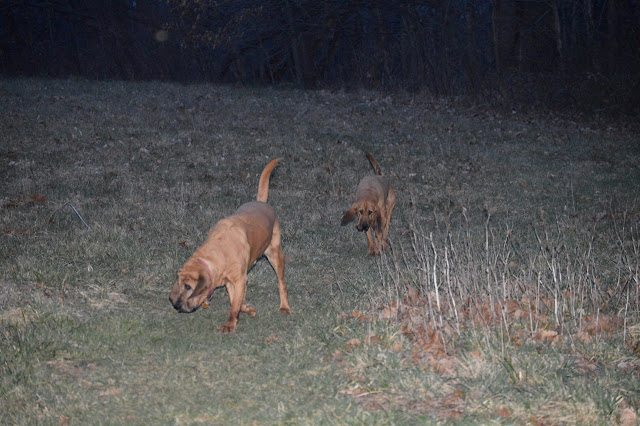 With the birds chirping like an April day here on the 9th of March, we took our walk about an hour early, a little past 8am. From these cloud it looks like rain was nearby and could start anytime but Wunderground shows it will not hit until 3pm. So for the past day and half, the predicted rain keeps moving ahead 8 hours. 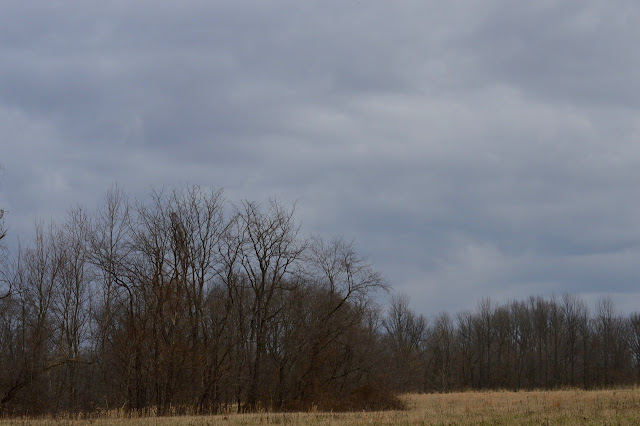 I could tell as soon as we started it was one of those days where the hounds were going to have a mind of their own. As long as they stayed out of trouble I was okay with their freedom. You will see in later photos the limits were stretched once again but still had positive results. 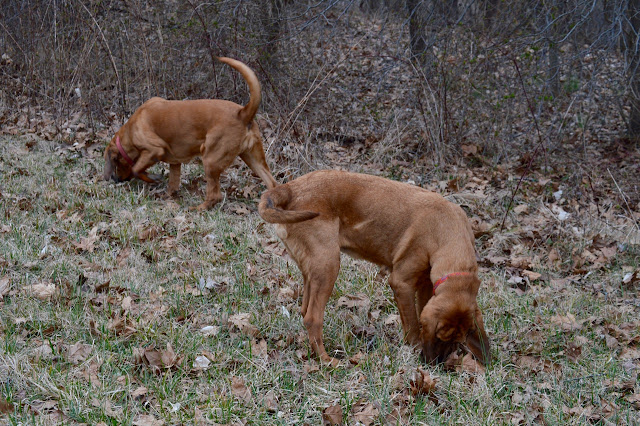 Before I get started I'd like to ask a favor. I'd like for you to comment or send me an email and let me know if these photos and the ones you have looked at in the past week ... look clear and sharp to you. To me, they don't. Of course when I was on Wordpress, the photos were really sharp and clear on the blog, compared to Blogger. Yet, in my Photo file they just don't look as sharp as they use to.

It might be my eyes though and that is why I am asking for your help.

As I was glancing into the wooded area along the first part of the walk, I saw our first cardinal of the year. A sure sign that spring is here. 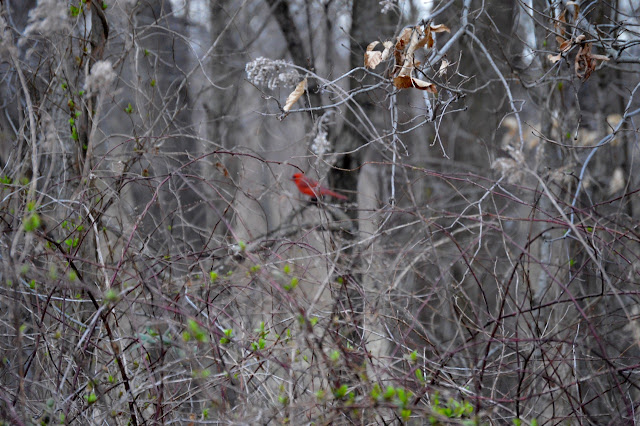 As we made the turn along the walk, Sadie once again eyed the gully and a place I am sure that deer hang out sometime due to the interest of the bloodhounds. She looked over the edge but turned away when I said her name. 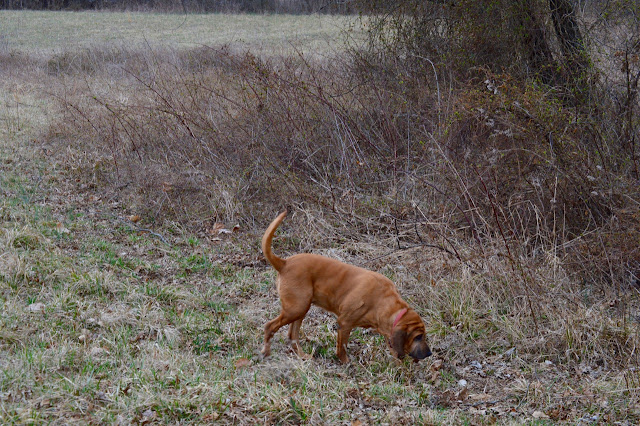 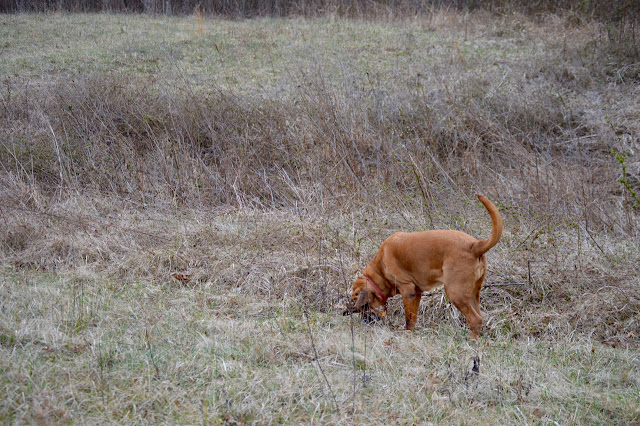 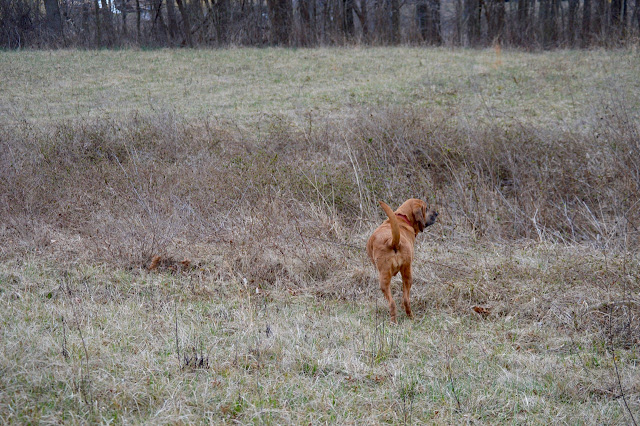 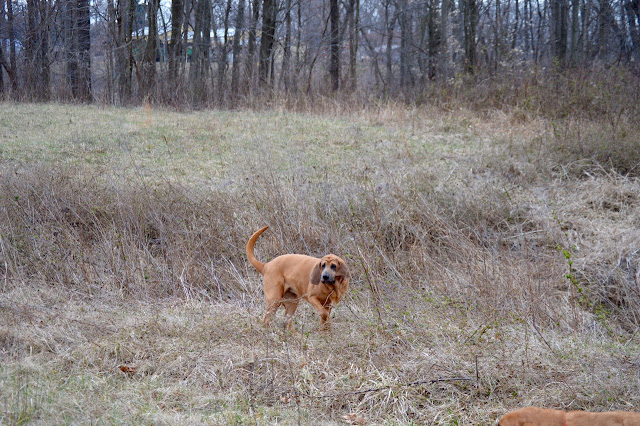 Stella headed for her favorite spot in the far right corner of the field. I am not sure what she finds but the spot of interest is always in that same area. She was behind for most of the walk up to this time. With the camera not auto focusing all the time I was only able to pick up a couple of photos with her running to catch up. 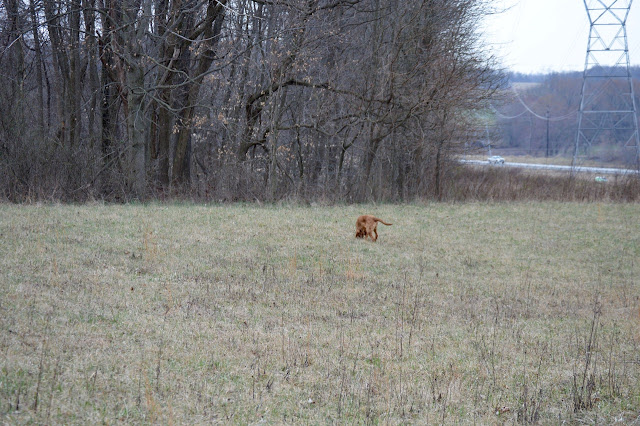 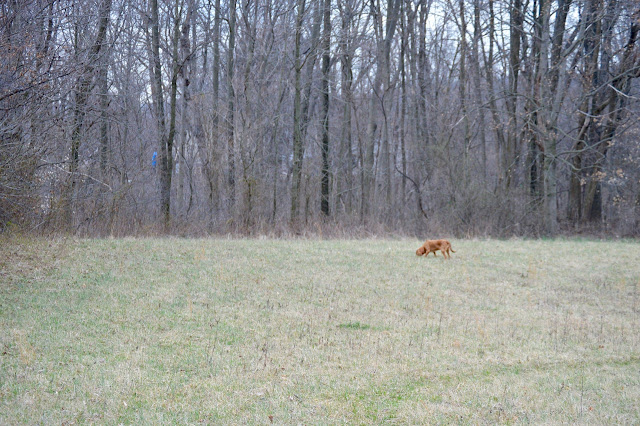 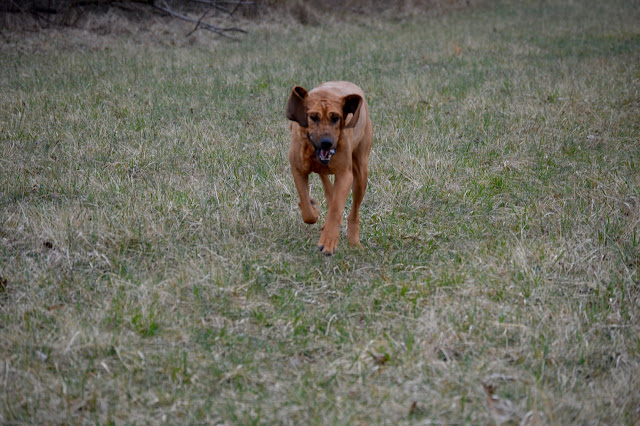 With the hounds having a mind of their own today, Stella also veered right as we turned to come home. New scents, new trail but finally came running to join Sadie back at the area they would not leave two days ago. As you will see, they didn't leave there today either. 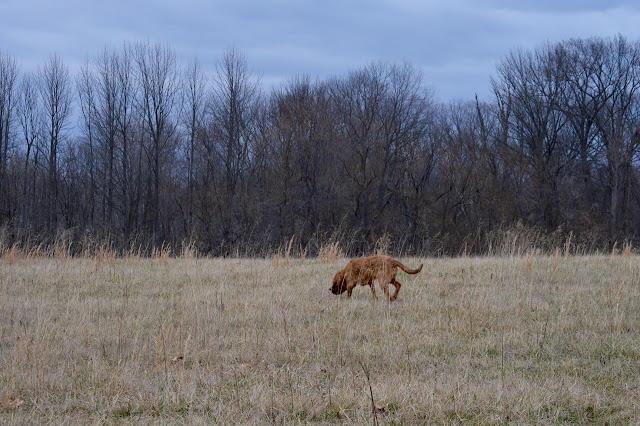 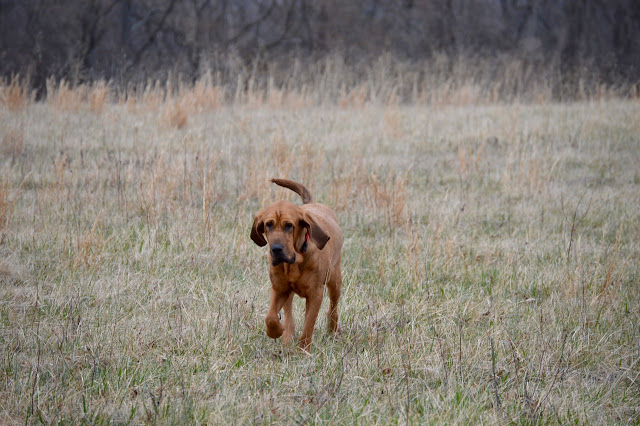 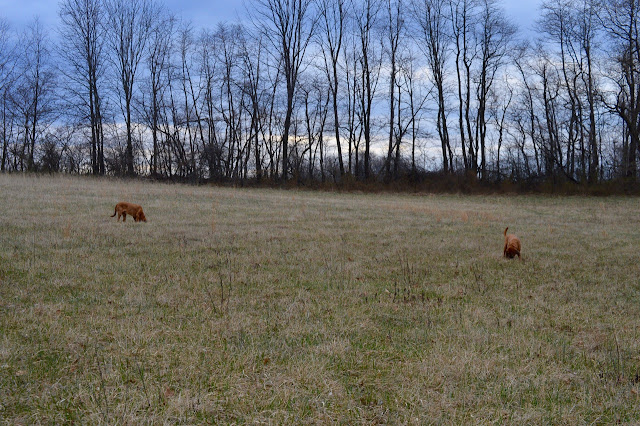 I decided just like I did the other day when they didn't follow me that I would continue my walk home. I had no doubts they would eventually run to catch up ... but today I got further away from them than I ever had. You can see I can't see them, they can't see me. 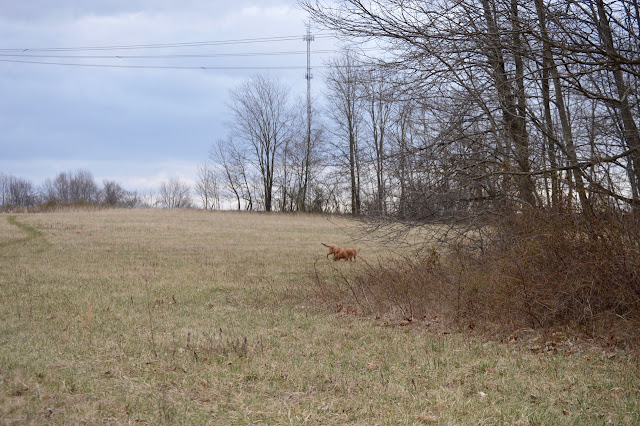 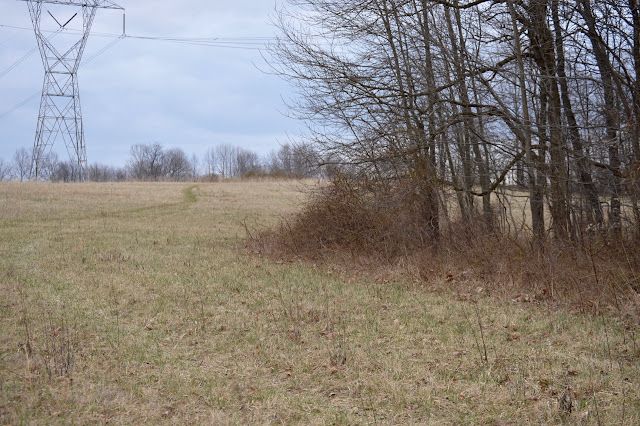 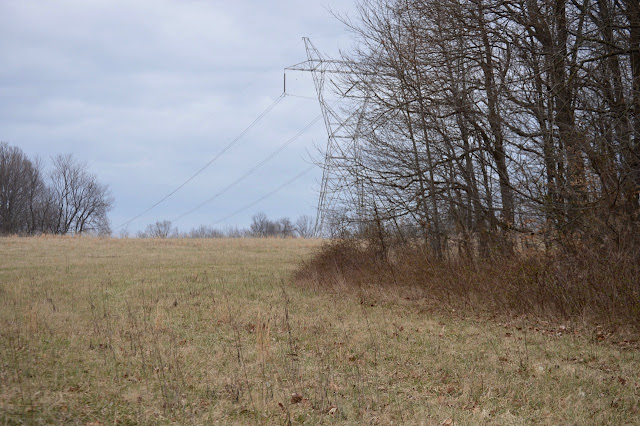 I was almost home and still no sign of either bloodhound. By this time I was willing to walk all the way to the house just to see what they would do. I didn't think I was putting them in a bad situation and if I walked back toward them that they would still be there. 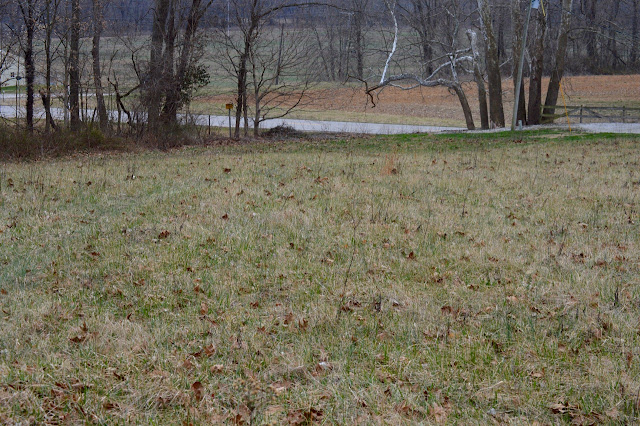 Then .... about the time I think they are not coming I barely see one bloodhound, so far away I can't tell if it is Sadie or Stella. Sadie rarely runs with her nose to the ground and Stella always does. It really looked like Sadie based on the body of the bloodhound. As he ran up to me it was ... Sadie 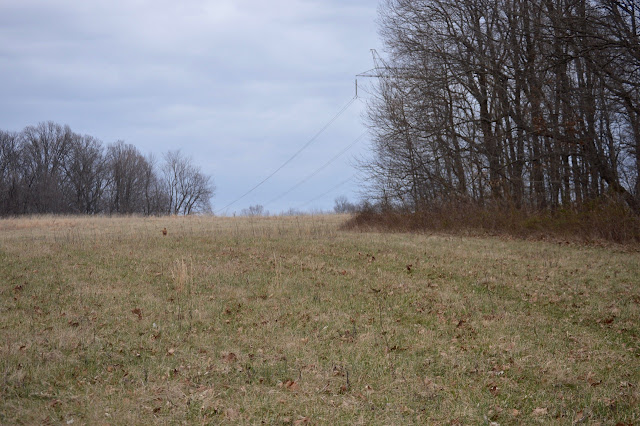 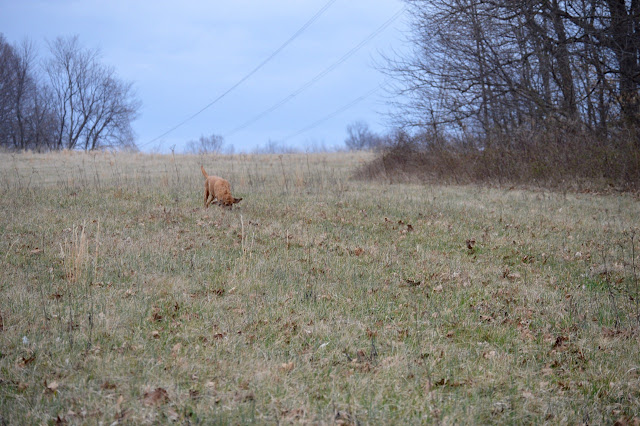 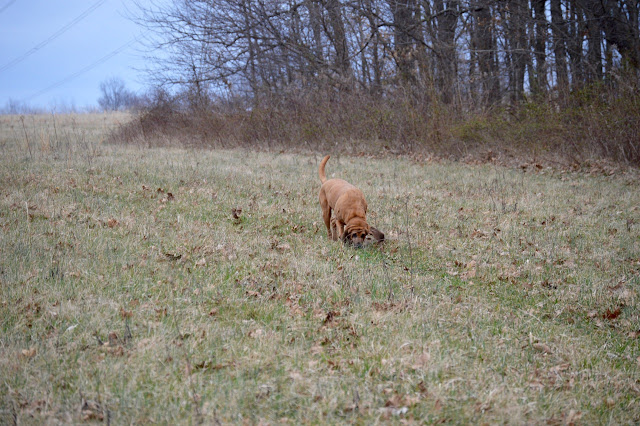 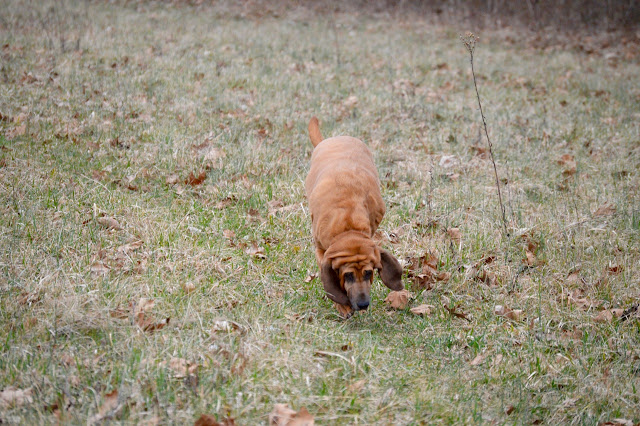 After that last photo I glanced up and could see Stella sprinting as fast as she could. Not only had I left her but Sadie had left her. Once again the Nikon D3200 would not auto focus each time I pressed the button so I was not able to get more photos of her long distance spring. 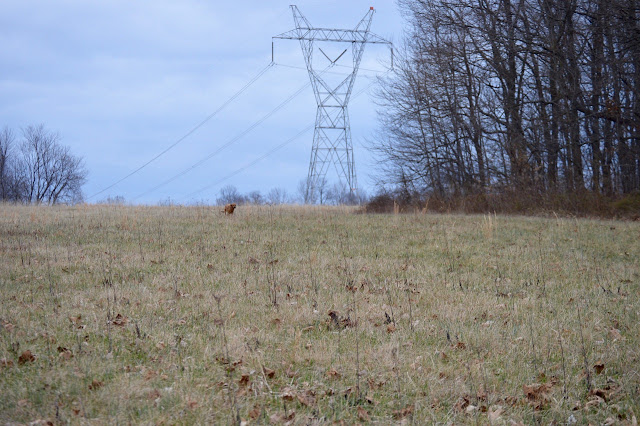 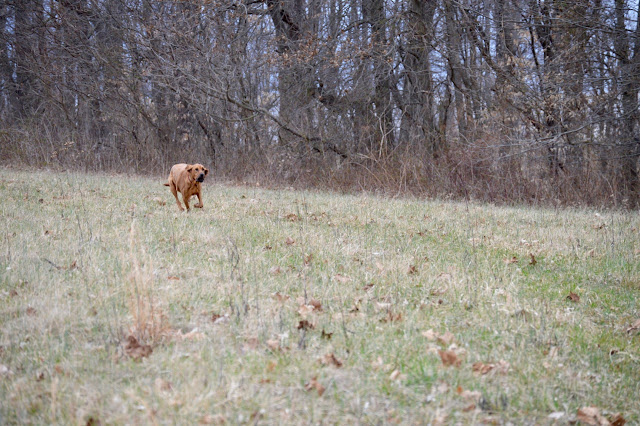 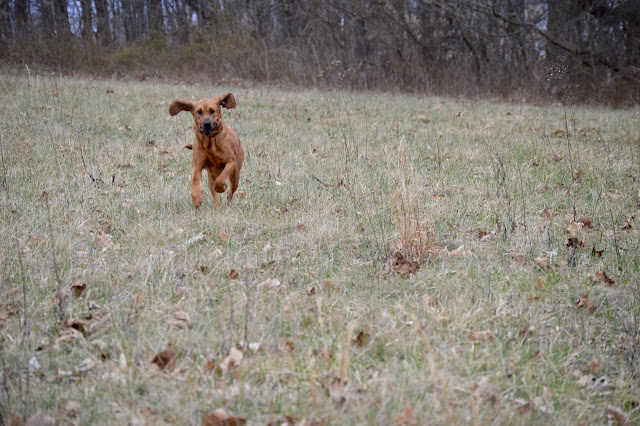 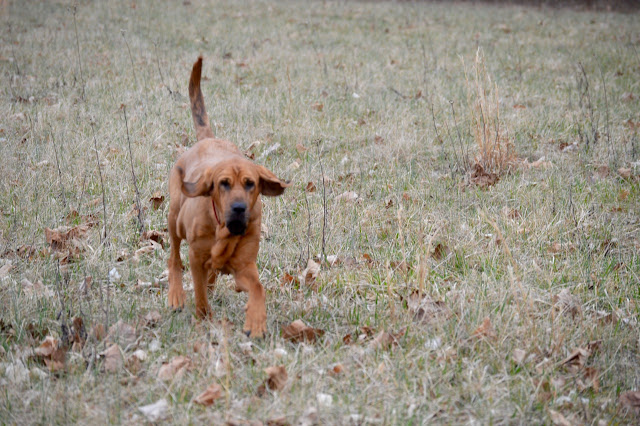 I don't mind that they lag that far behind me as long as I don't see them moving in the opposite direction. They can get in some exercise running hard a long distance. It will be interesting to see if these limits expand on future walks. It will never get to a point where I go back inside the house and leave them out in the field where I cannot see them. I will turn around and walk toward them before I would leave them alone.

The grass gets greener each day. The lawnmower blade has been sharpened, the two gas cans have been filled gas for the mowing season and a new spark plug has been installed ... everything ready to cut grass.

It was too warm for wearing a sweatshirt here in 'the tropics' of Southern Indiana this morning.