The Hounds On A Late Walk

It was barely an hour after the last post when Sadie is at the doorway giving me the 'stare down' wanting something. They hounds had fresh filtered water in their bowls so it wasn't that. They knew it wasn't time to eat. They had been out a couple of times since the last post but just stood staring at me.
They were bored ... and I was bored enough that I was almost starting to go back through older blog posts to edit them and change the justification from left to full.
It was time for a walk ... even in the danger zone of seeing potential deer at this time of night ... not quite 7pm. With daylight savings time it wasn't going to get dark for another hour. I doubt with the overcast clouds the full moon will be seen tonight.
So I grabbed the camera, Sadie and Stella became excited and off we went. 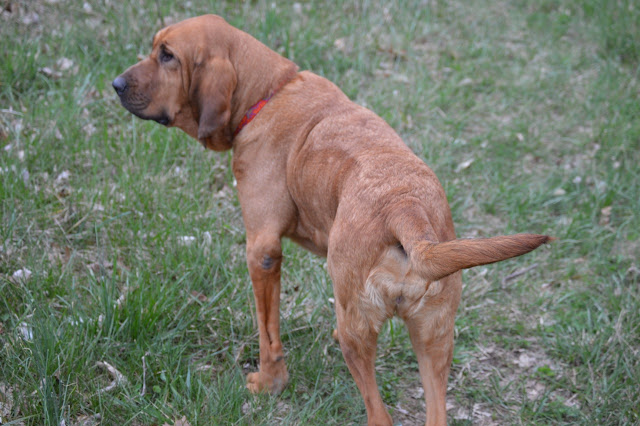 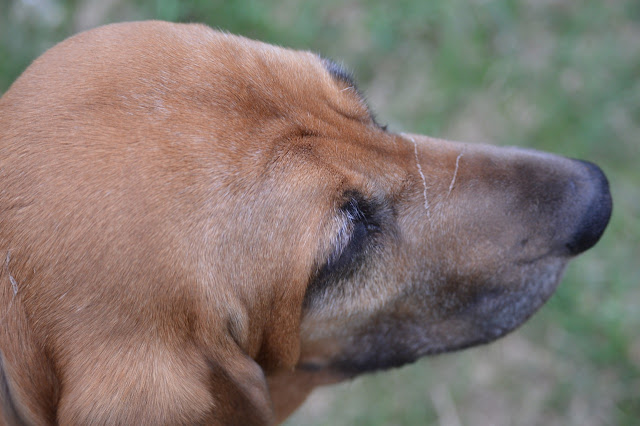 It was strange to see Stella lagging so far behind from the very start. I'll not describe what she is doing and most likely eating. Still bothers me.

Sadie and I were almost to the first corner where we veer right and Stella was barely in the camera view finder. Then .... she came sprinting. 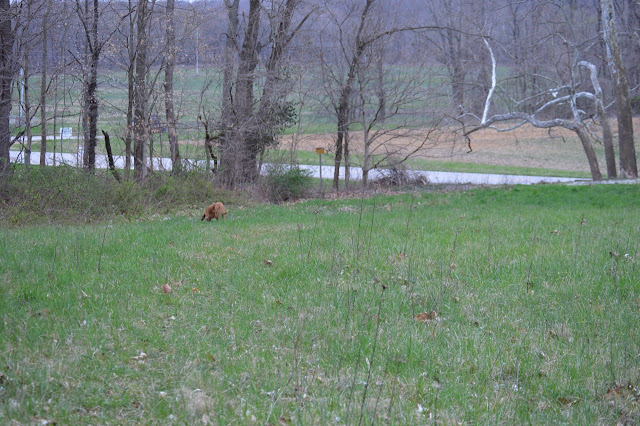 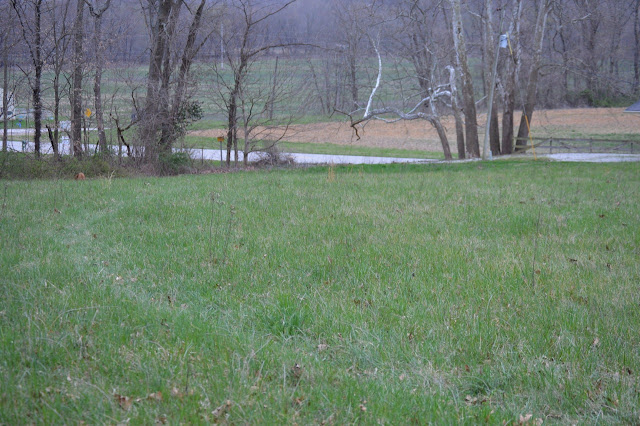 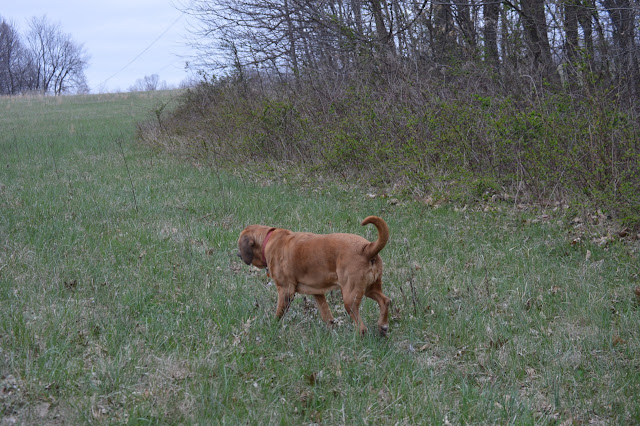 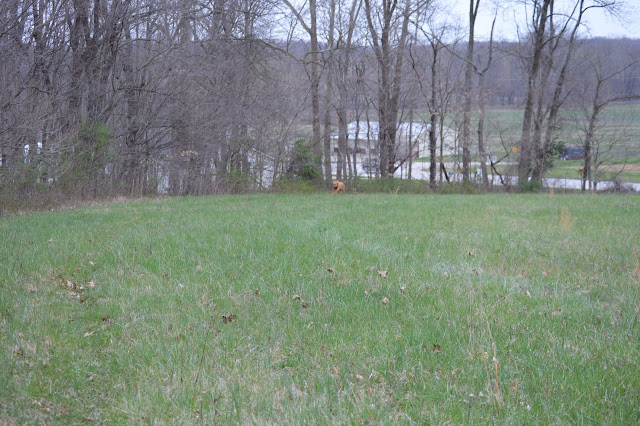 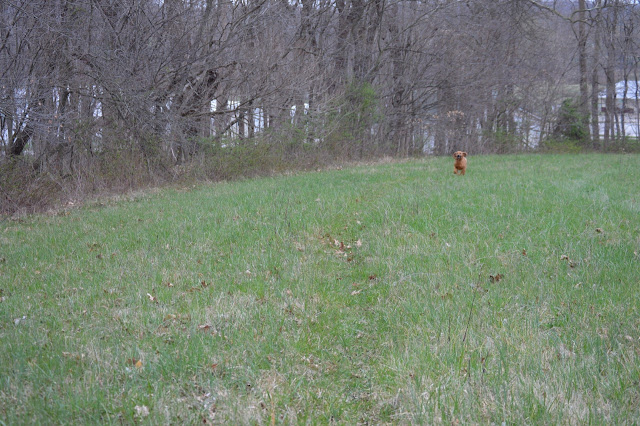 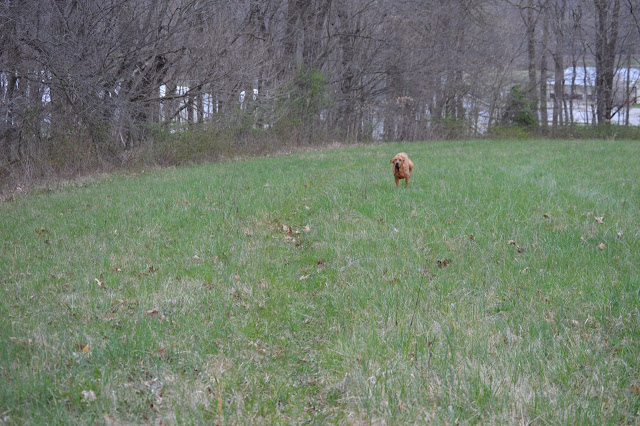 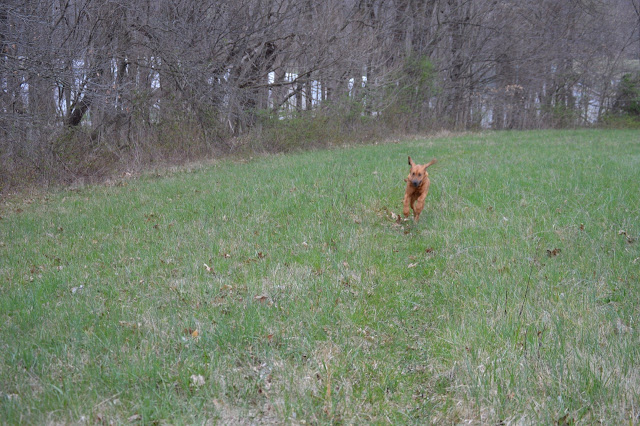 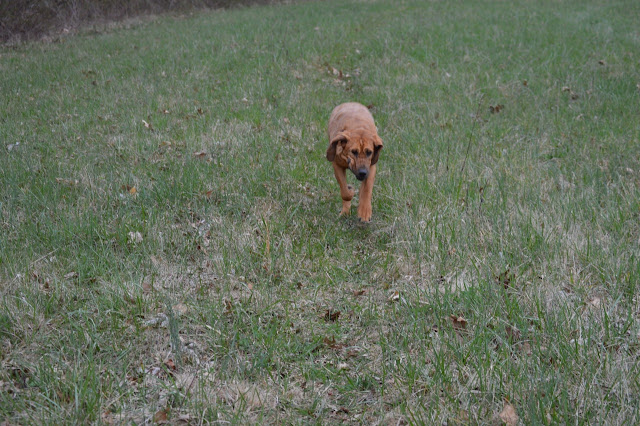 I was well aware of the time and knew I had to be very observant looking ahead for any kind of deer movement. During this time of night I have seen 3-5 deer jump out here at the corner and I have seen up to more than 10 standing at the bush line looking at the house.
So my radar had to be in tune just like the hounds already were with their tails upright and curled. They were both onto something. 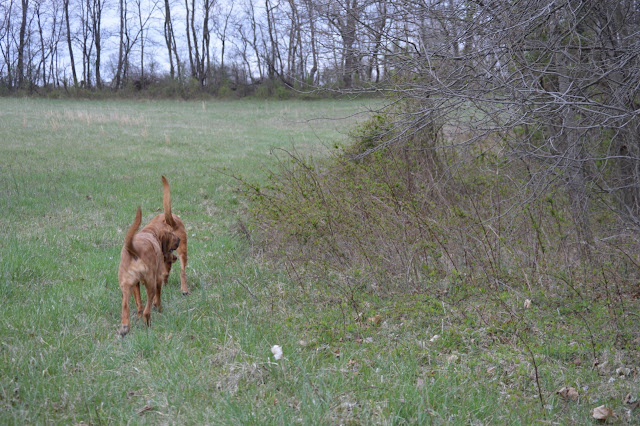 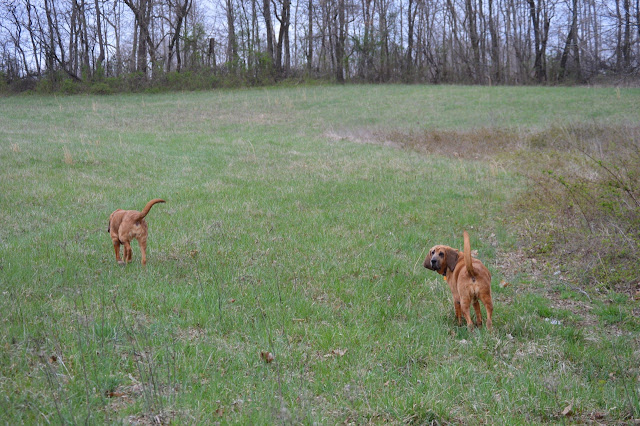 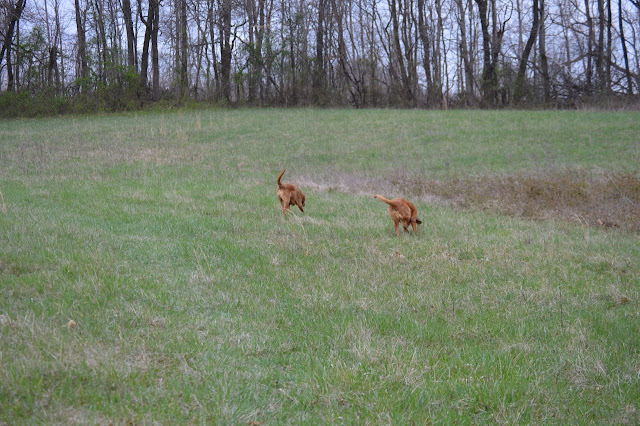 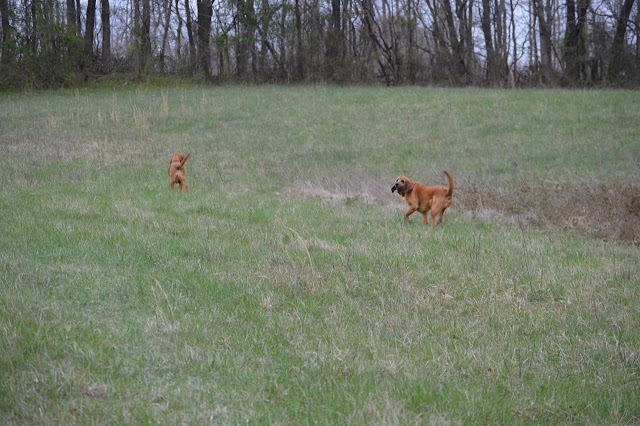 About this point in time Sadie becomes almost frantic with what she smells. The photos don't show how she was moving in different directions ... then she turns a sharp right into Stella's favorite area ... that is Sadie in the very far corner. 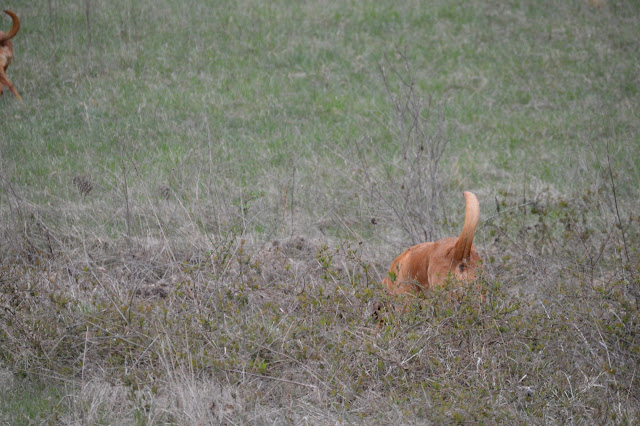 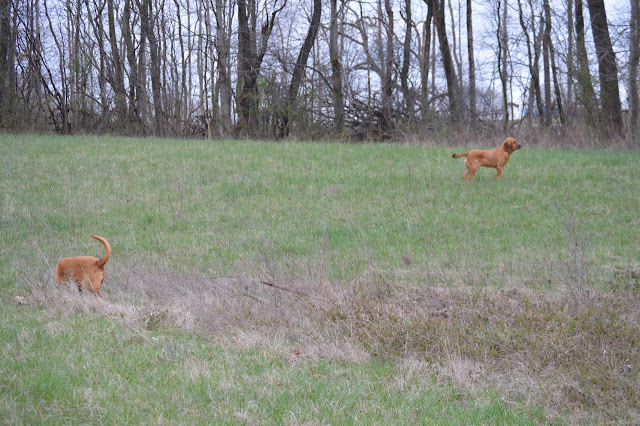 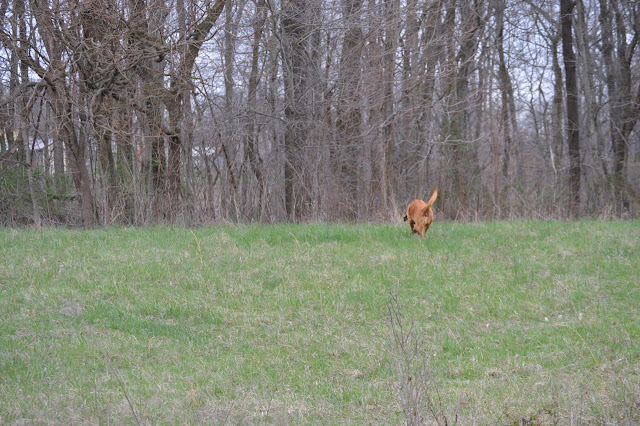 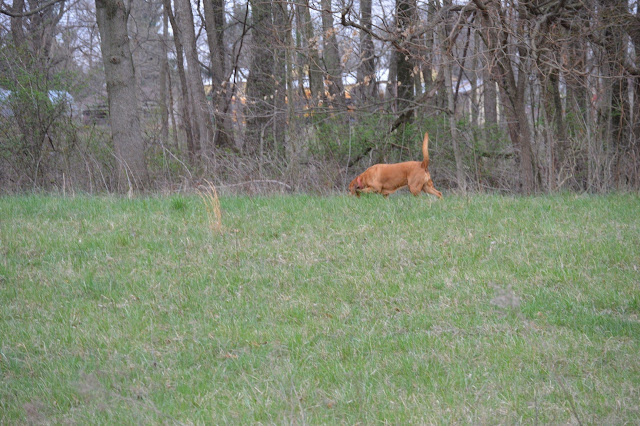 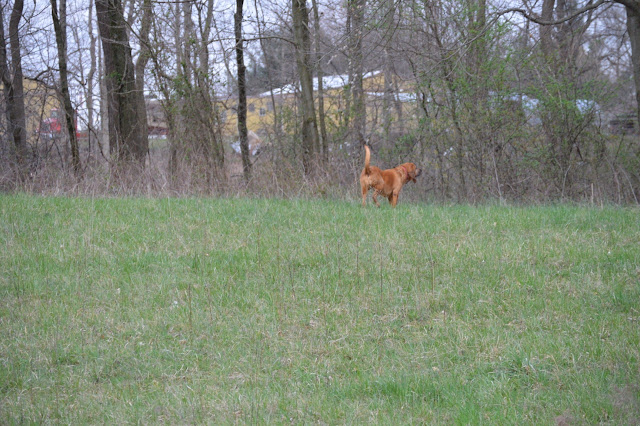 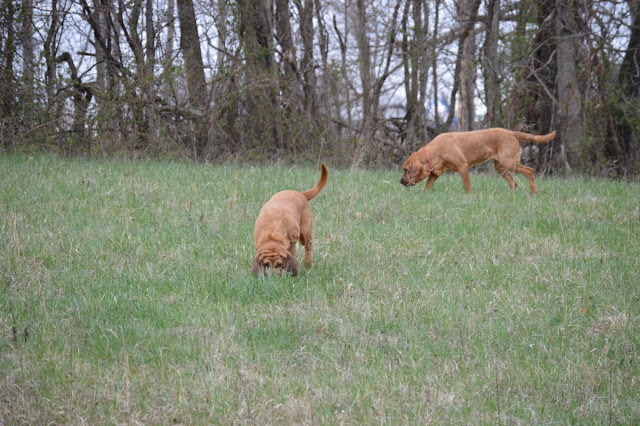 I was happy to see that both hounds came in my direction when called. Stella had found one of the spots where the deer have jumped into the bushes and over a small fence when they have seen us in previous walks last year. I am pretty sure she walked into the bushes to the fence just to double check the scent. 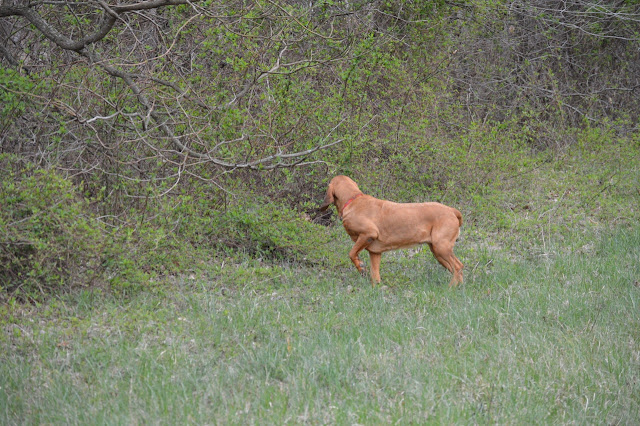 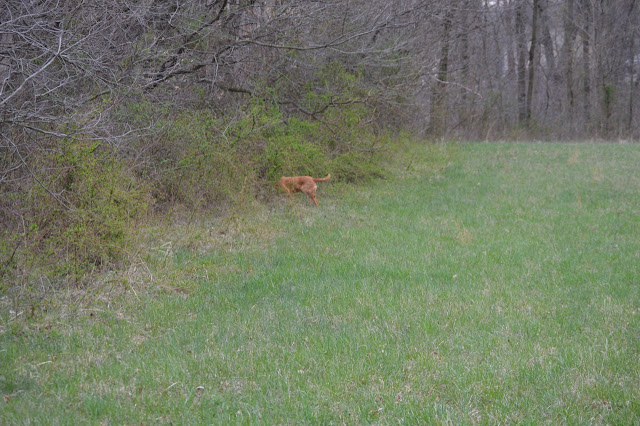 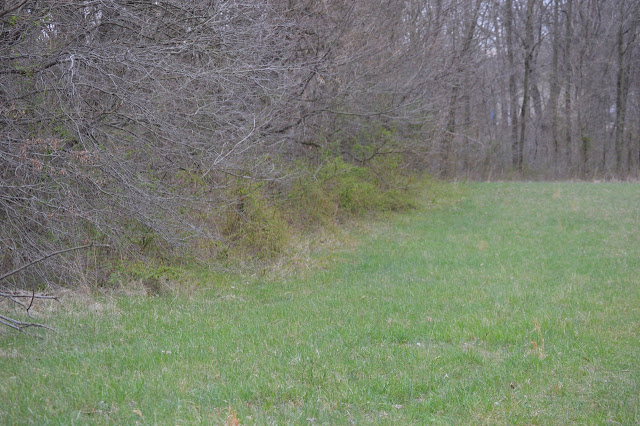 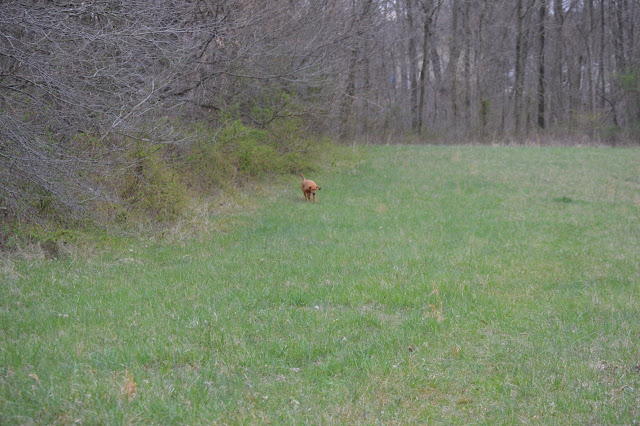 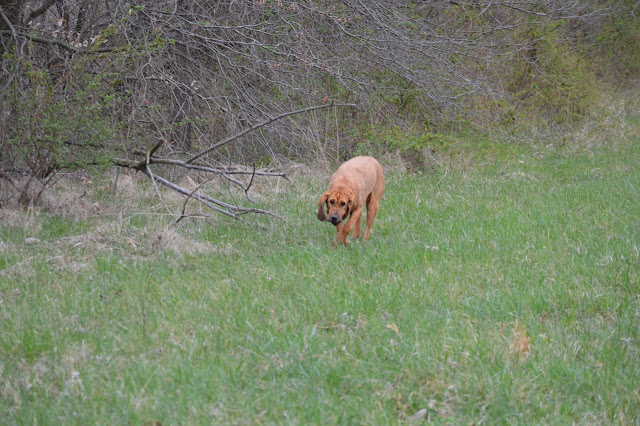 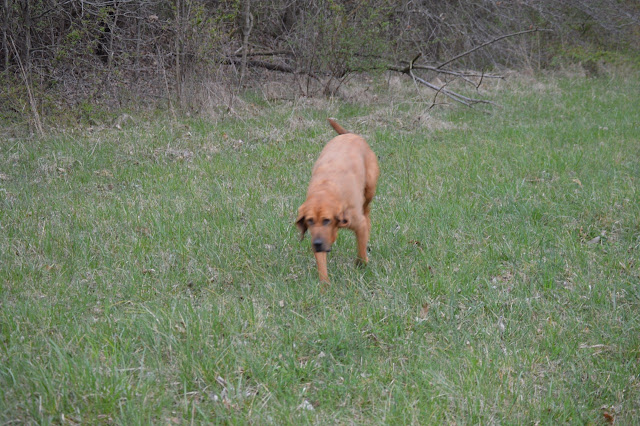 After running at full speed a couple of times on this walk, both hounds were happy to head home ... yet, there were a few more places in the open field they had to check out. 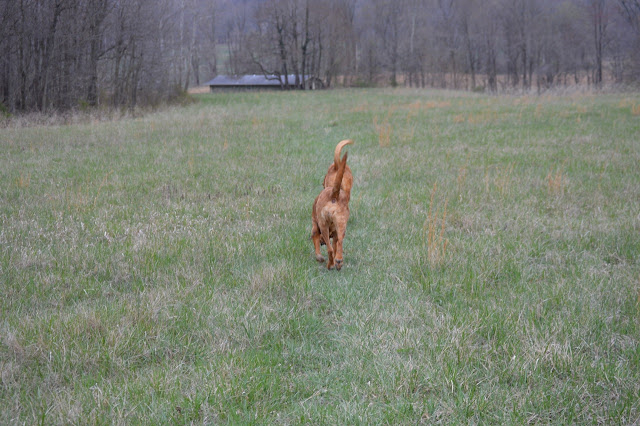 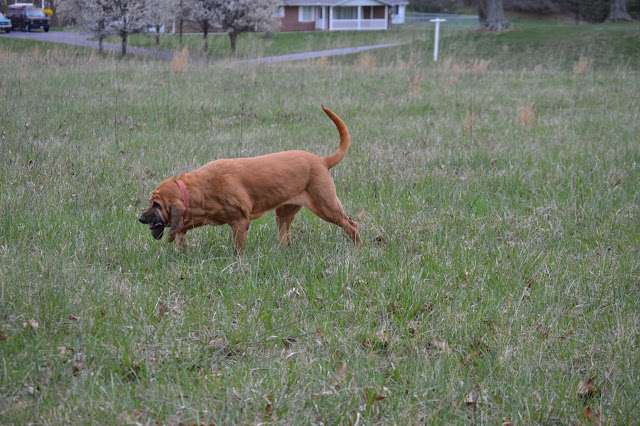 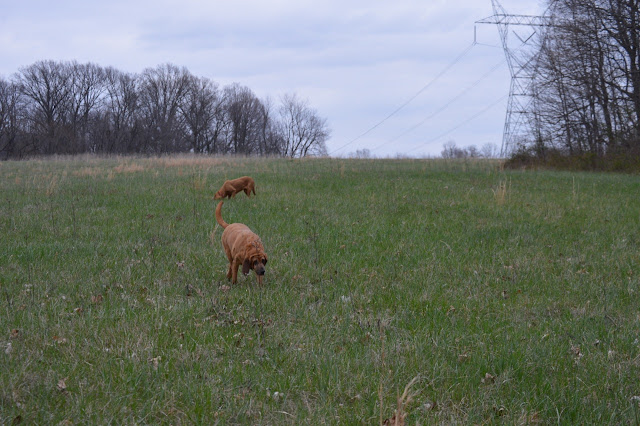 By the time we returned it was dark enough I guess, that the automatic flash decided to get in on the action. 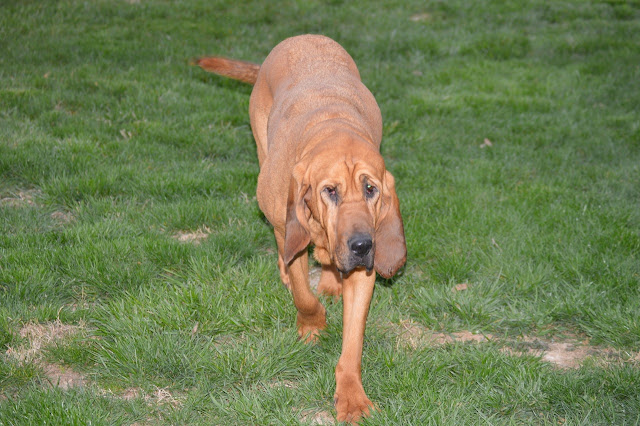 You didn't think I was going to end my day with just one hound walk did you? If really felt good to get that 2nd walk of the day in for the hounds, they were sound to sleep minutes after coming back inside.
It will be books and maybe some blog edits for the rest of the night, here in 'the tropics' of Southern Indiana.
at March 23, 2016