Heidi Demanded a Walk On Friday 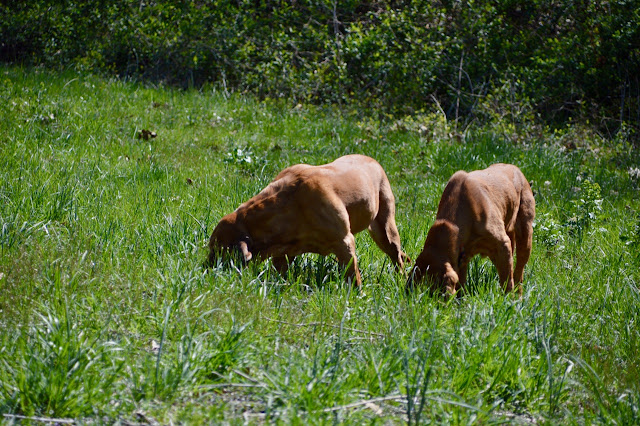 While the hounds were outside after their Friday afternoon lunch, I had a change of plans. It was time to take off the Z4 car cover and take a drive. While I was taking the cover off I decided I did not want to wait for dinner and the Chinese Buffet, although it is open during the day. I was going the opposite direction for some Amish food buffet. 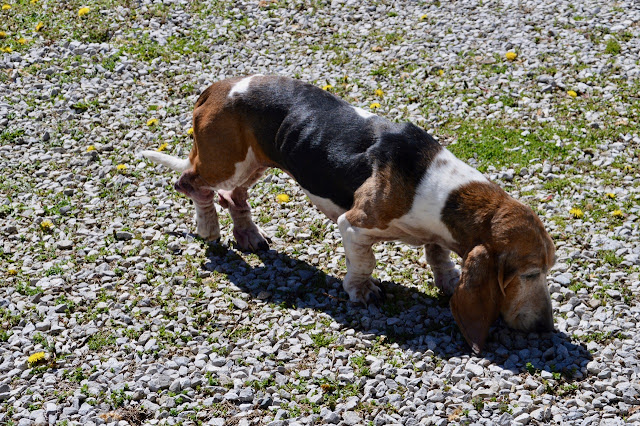 It was a beautiful drive to and from. It wasn't warm enough to put the top down but the scenery through this curves and hills of southern Indiana is great to see. As usual the food was great, seafood is always a special on Friday, great salad bar and coconut pie that you can't pass up. 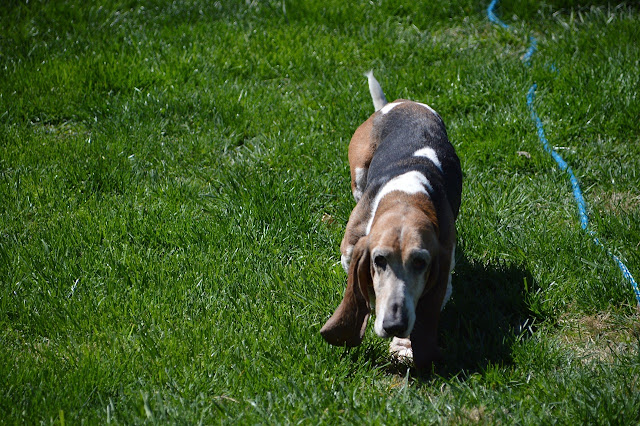 I had left Heidi alone to protect the house with Sadie and Stella sleeping in the bedroom with the door shut. It's normal for Heidi to bark when I get home to let me know there were no problems while I was gone. Then she likes to stand up on her back legs with her paws on my legs to greet me.

Today was a little different. After she hopped down, she started barking non-stop and ran toward the door. I let her out, then went back to open the bedroom door to let the bloodhounds out. Grabbing my camera I knew the hounds would be ready for a walk. Would Heidi?

From the way that Heidi was barking I had a feeling that is what she wanted to do. When it is warm outside and she is feeling good, it's the way she acts. 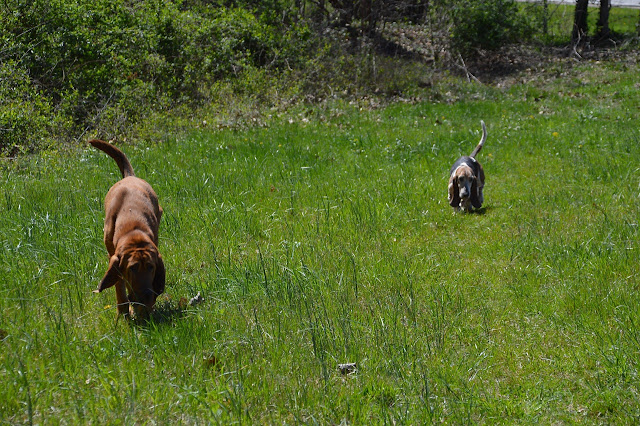 She alternated from trotting to walk to stopping for a deeper smell. 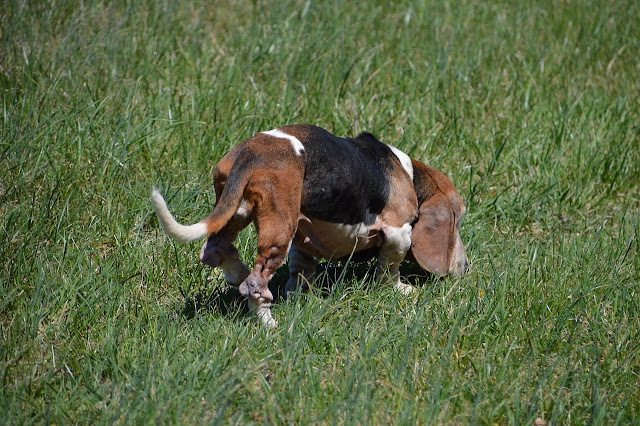 Stella charged out of bounds, through the wooded area to the right of us and attempted to go down into the gully. She came when I called her but with three hounds going three different directions, Stella had earned "temporary restriction". 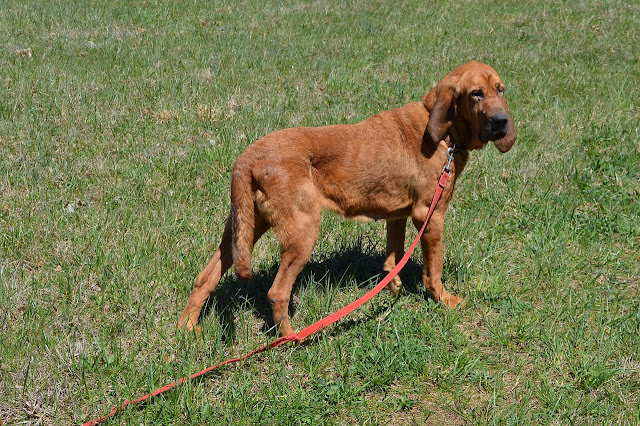 Heidi has never liked getting her feet wet, especially on a walk. So once the path started getting wet as we neared the back of the field, she tip toed away from the path, slowly looking for some dry ground. 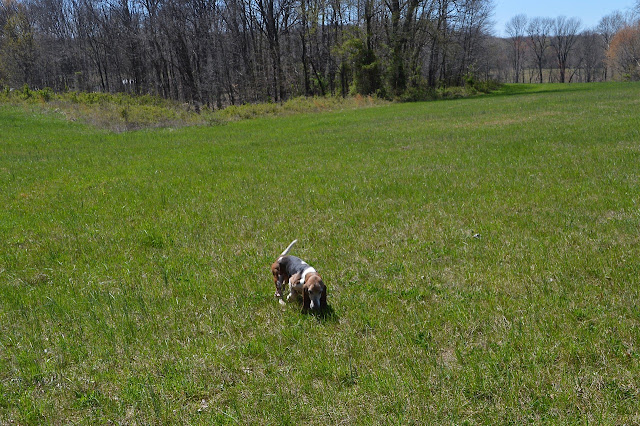 When I bought her from the GABR in June 2011, she had a reputation as a 'runner', to be leashed at all times. She just needed some room to run because a few weeks after she arrived I could see she would not need to be leashed all the times we were outside. She has never gone near the highway nor has run off when she is let outside on her own.

She still has one of the better noses among the hounds. 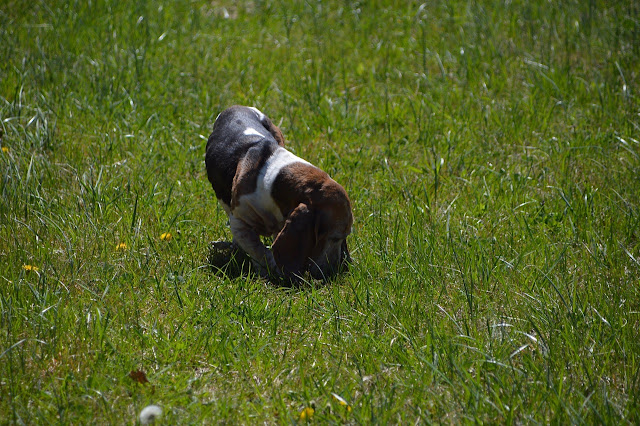 Stella figured out she could still scratch her itch even with the 6' leash dangling from her collar. She had been dragging it from about the first turn to the back of the field. It was taken off right after I took this picture. 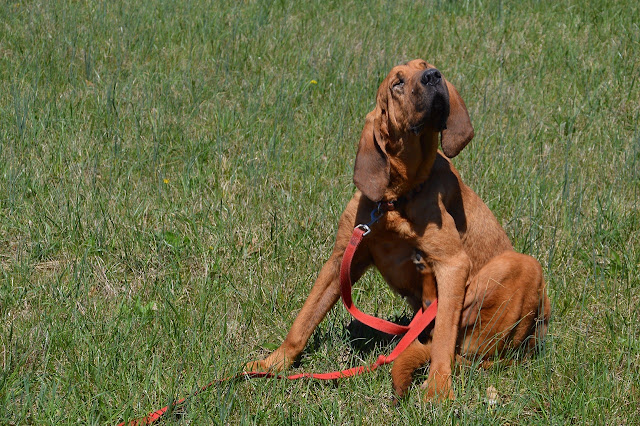 Heidi was enjoying her own pace as was Stella. My problem was up ahead ... Sadie had taken off running toward the neighbor's woods. It had to be the big blonde cat she smelled. 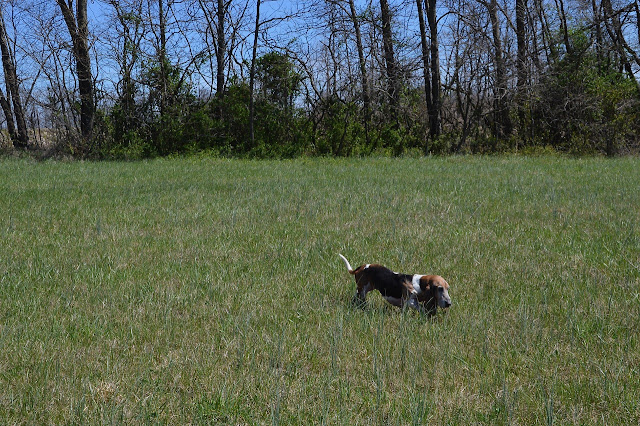 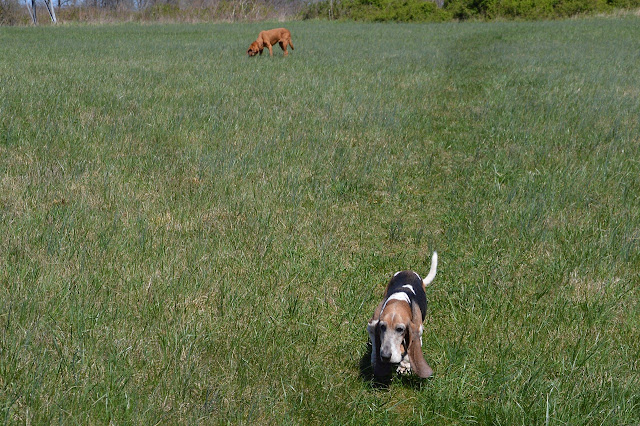 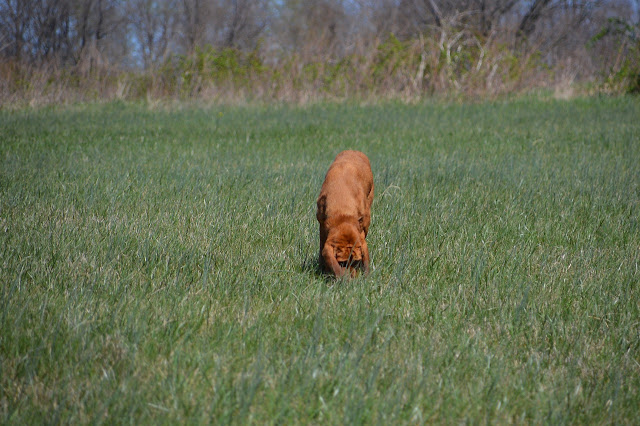 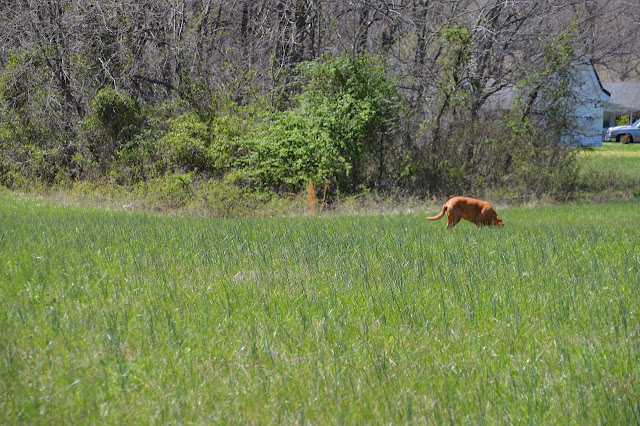 Before I could go get Sadie I had to get Stella ... she started running toward me when I called her name. Heidi kept walking on the path. 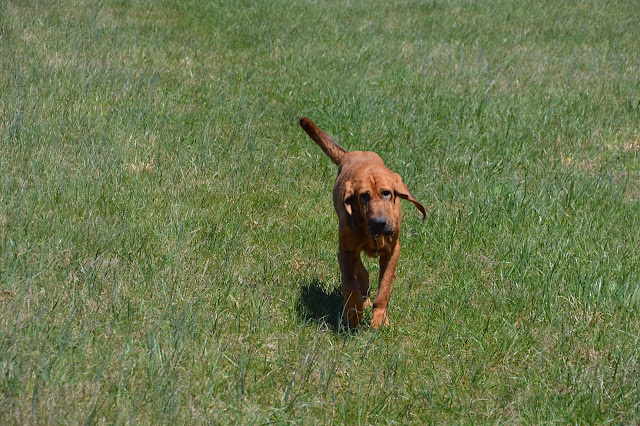 I finally got all three of them herded into one area ... just like cattle. All their noses were headed in the same and correct direction ... a successful walk. 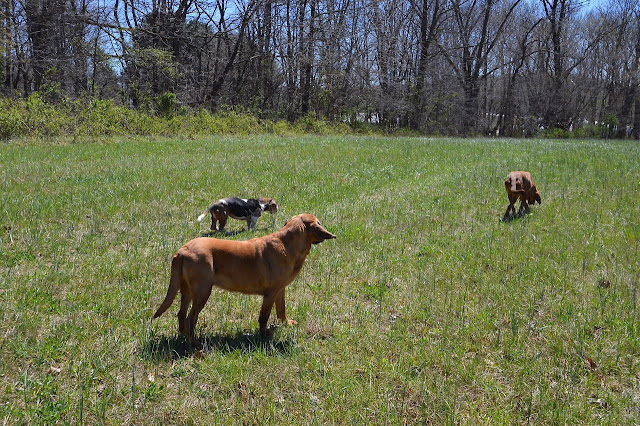 I still have not made it over to vet for annual checkups and a rabies shot for each. I'll take Heidi first and then maybe the bloodhounds at the same time ... that should be a great picture of both of them in the back of the Mini Countryman when it happens. 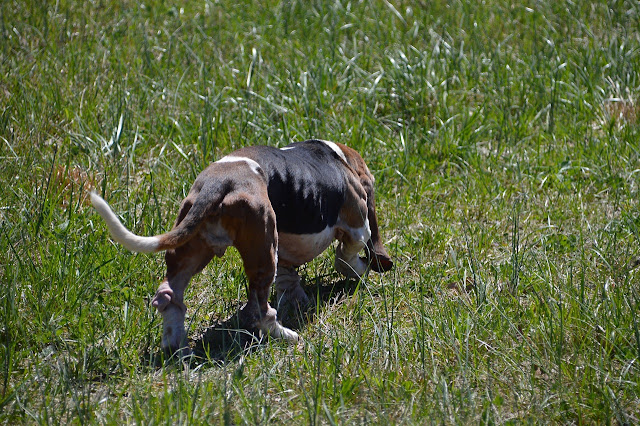 Heidi has filled out a little around all those bones I felt last fall and winter, so she has added some pounds. She does not have any irritated skin but some areas where the hair will never grow back. All of her skin is soft and her coat is smooth and soft. The change in dog food helped. 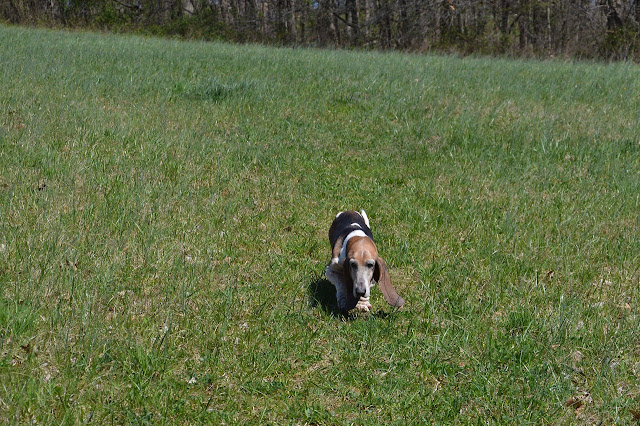 She wagged her tail most of the way, stopped for a few places of interest and acted as if she was enjoying her afternoon outside. 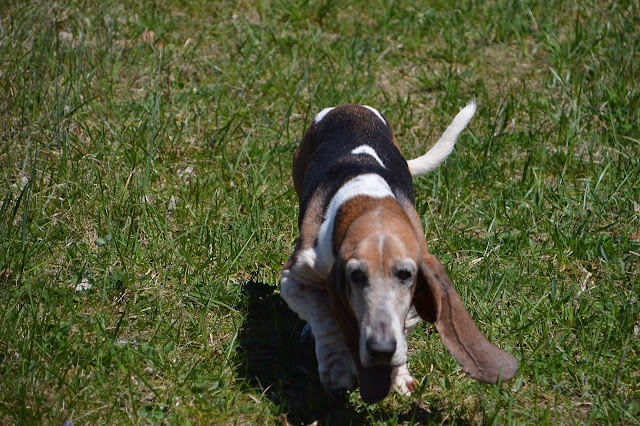 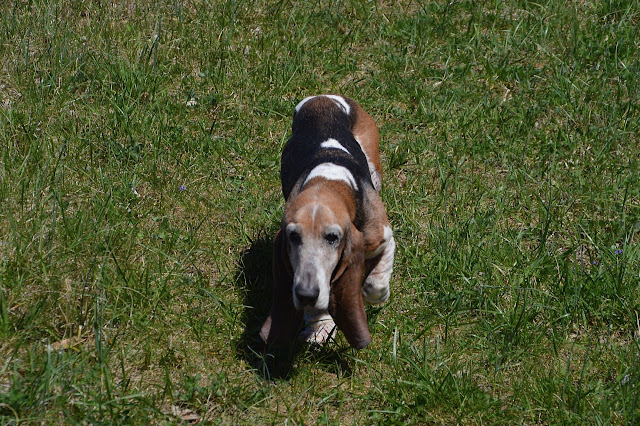 It wasn't five minutes inside the house where all three had found their favorite spots and were out for their afternoon siestas. Another successful day in the life of a hound.

Warmer temps have arrived here in 'the tropics' of southern Indiana.
at April 08, 2017