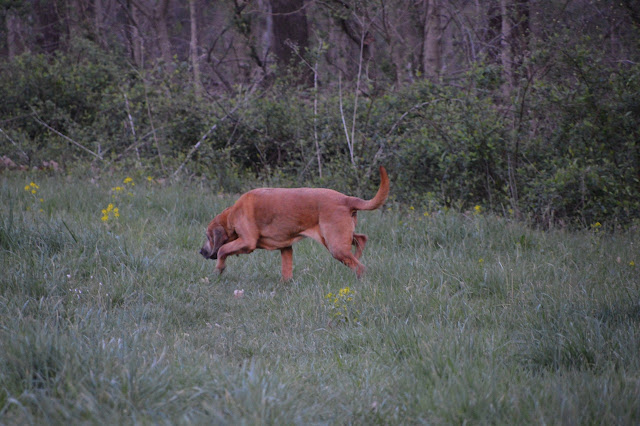 I guess with the windows open all night, Sadie decided that Spring had arrived and everyone's schedule would be moved up an hour. She was outside an on the prowl by 7:30am. With the weather warm I don't mind starting the day that early ... when it's dark and freezing, then there isn't a chance of getting up that early. 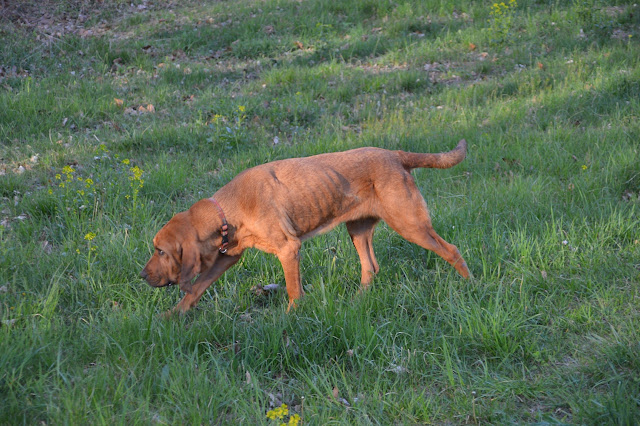 I decided today it's a new week, I'll let Stella do whatever she wants today. I expected that I'd be swinging by the vicinity of the neighbor's on the way back to herd her back to the house. 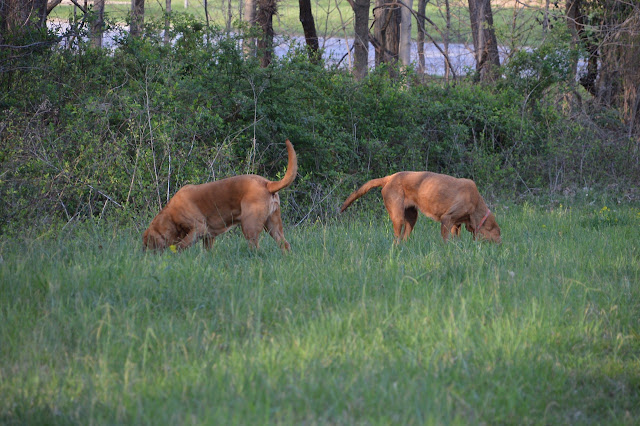 Sadie decided she could not wait any longer for Stella and had things to do, so we were off on the morning walk. The temperature of 65° was fantastic, t-shirt weather and the air was full of birds chirping away. 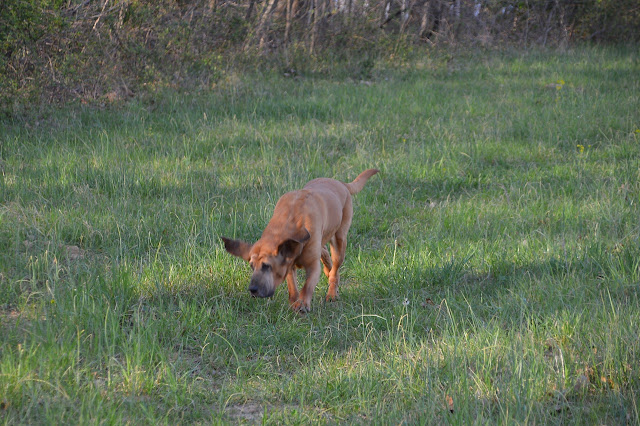 I still have the lens hood on and none of these pictures were edited. I imagine that will be the normal setup from now on. 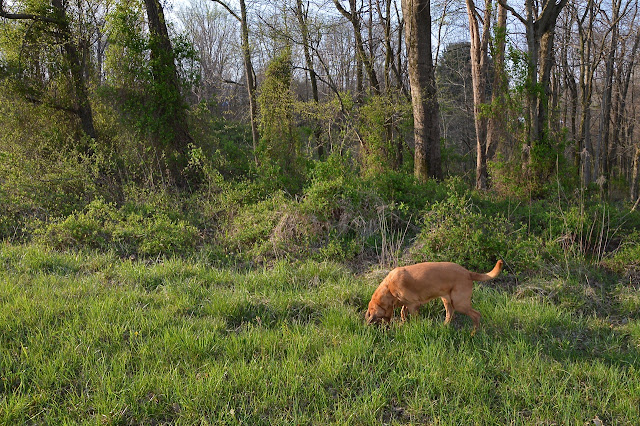 Sadie and I had just made the turn home when I picked Stella up in my 200mm zoom setting. She looked further away in that part of the field and looked like she was heading to the neighbor's drainage ditch.

I took off sprinting ... or at least as fast as my out of shape legs would take me. 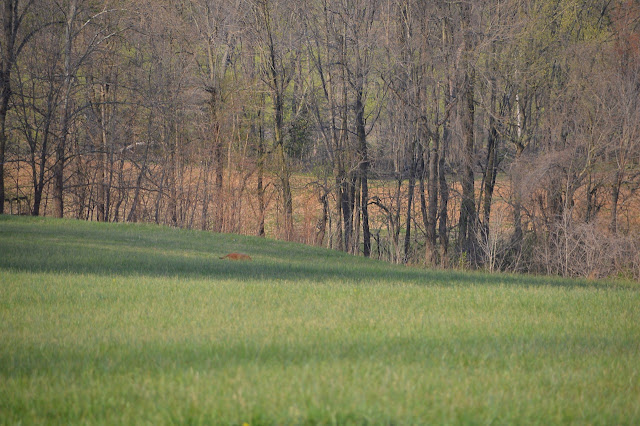 I was happy to see that she had found something to keep her in one spot. It's going to be great weather today but I have no intentions of having to give Stella a wash off of unknown drainage ditch stuff. I kept trotting in her direction just in case she took off. 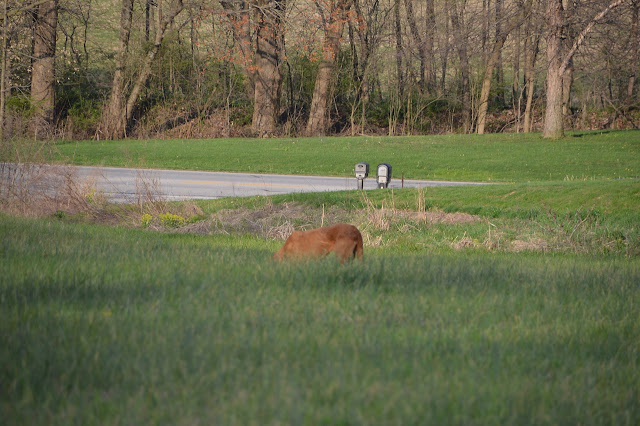 Finally it was time to tell Sadie to "go get Stella" ... she sniffed the air, found her location and took off sprinting toward Stella. Her ears were up and flying all the way. 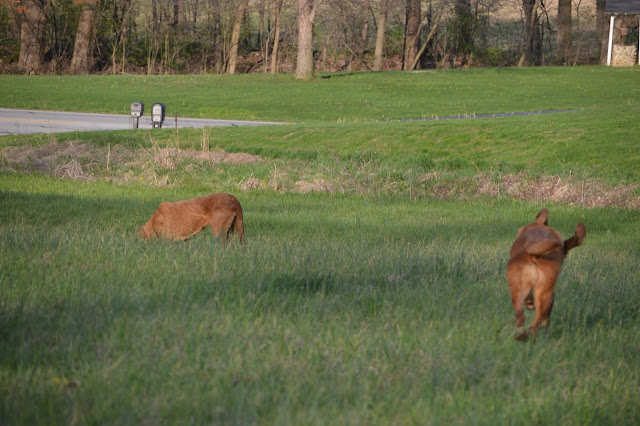 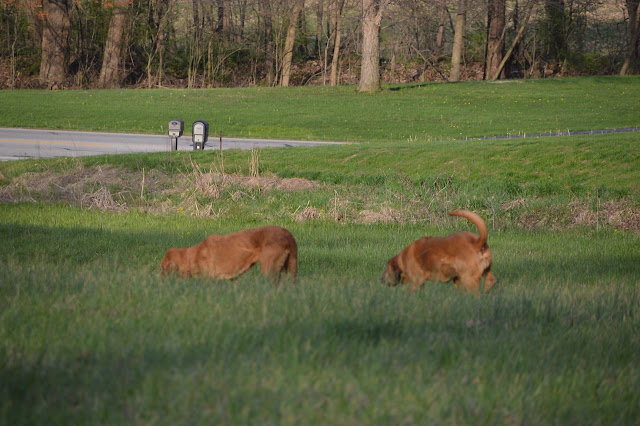 Whatever it was, it must have been good because Stella never raised her head as Sadie made a 'touch and go' with her face. As I got closer to her, she walked toward me and we headed back to the path heading home.

With the chance of rain this afternoon and tomorrow, I decided to fill the mower up and mow the lawn. The grass was dry, so right after the walk was completed I started mowing. Heidi decided she would roam the yard while I mowed. Sadie and Stella stayed near in the field, without wandering off.

Since Sadie started our day an hour early, I was able to fit in a nice drive in the Z4 with the top down before they had lunch. With the winds being pretty extreme there were a few times I had to make sure my ball cap was going to stay on my head.

By the time I returned home, all the hounds were letting me know I was late serving them lunch ... it was not even noon yet. Stella decided to get in a little post lunch workout. I was able to catch it in the following pictures. 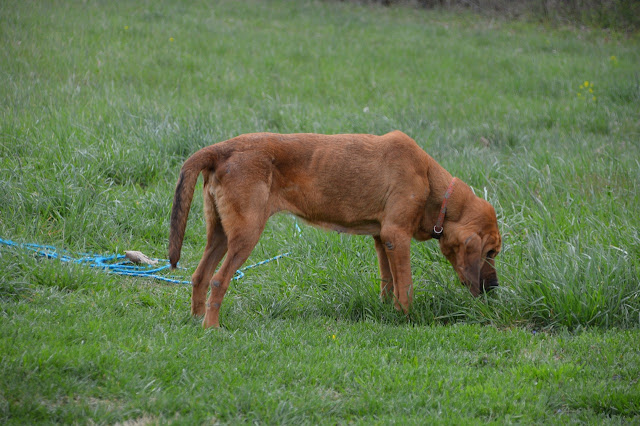 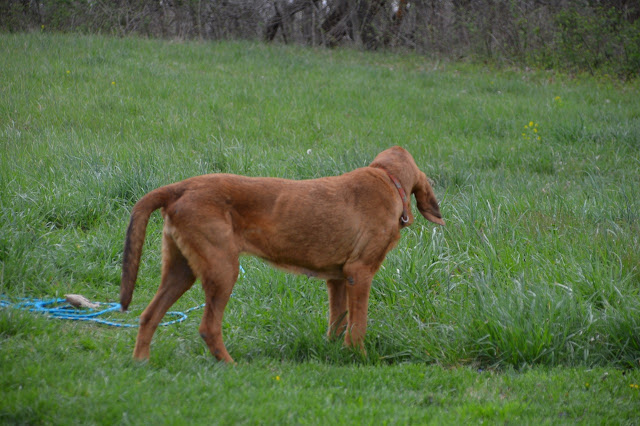 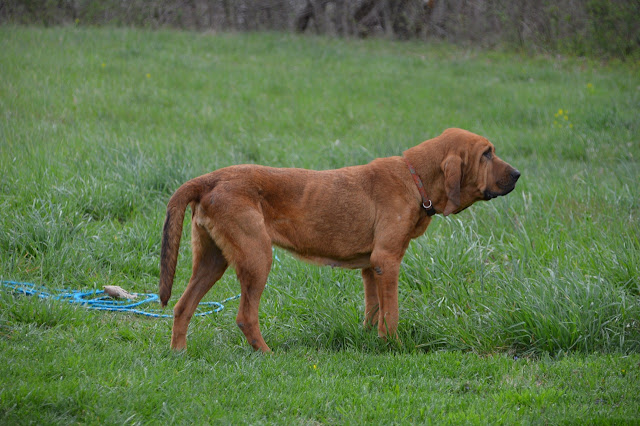 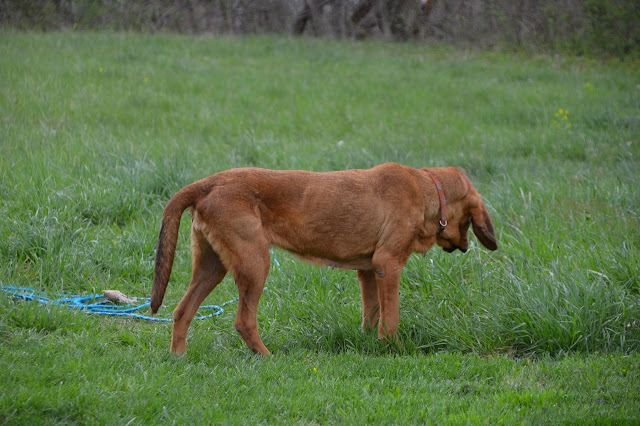 While they napped inside, I did all of my housework that I had been putting off last week. I can't explain how nice it is to have all the windows open. Even with overcast skies and high winds whipping through the house, it's still nice. 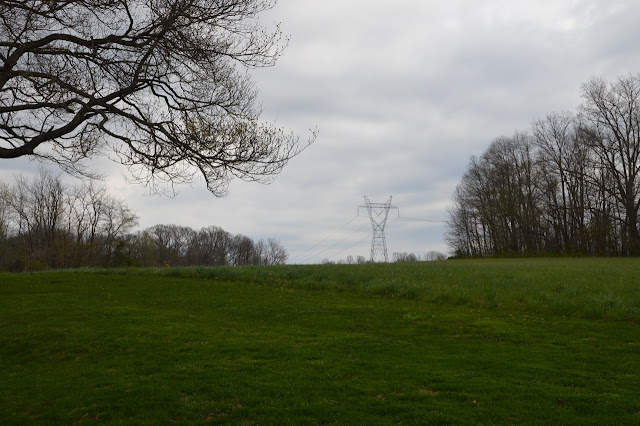 I was pretty sure the hounds might like a second walk a little early today. I still had some things I wanted to get down this afternoon, so off we went. It started out well but it wasn't long where I could see for some reason they were not really enthused about a walk. 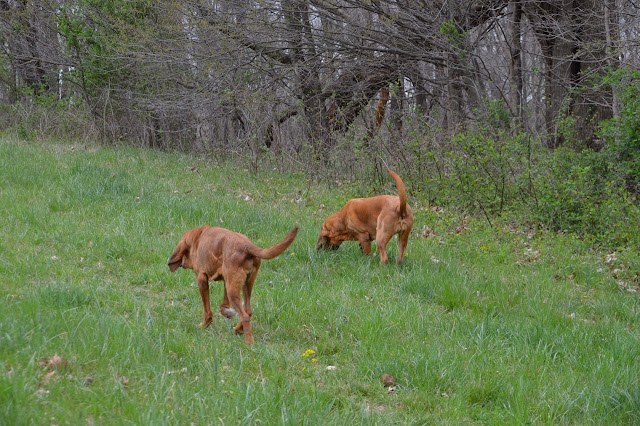 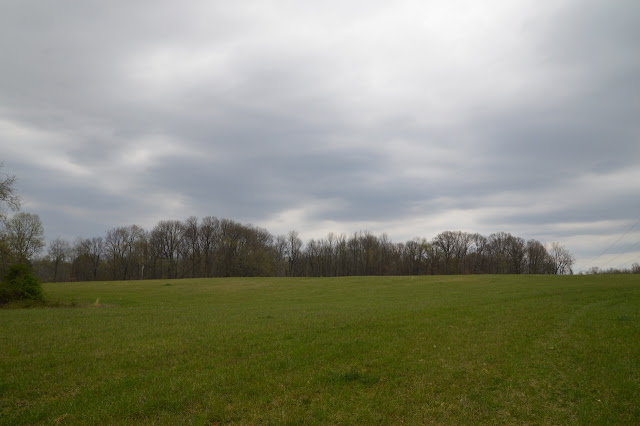 This might be Stella's new routine, since she seems to come up with one every few weeks. For the second day in a row and not even at the first turn she suddenly stopped walking and sat down. She wasn't interested in going either direction but then I remembered, she loves sitting in the yard facing the wind when they are strong. 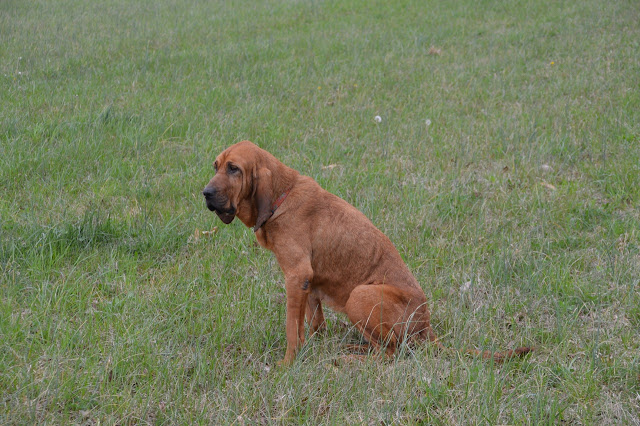 She started walking our direction after I called her name for the 100th time. After taking about two steps she stopped to look over at the woods where the large cat was seen a couple of weeks ago. She would love to just hang out there all the time, except when it's time to eat. 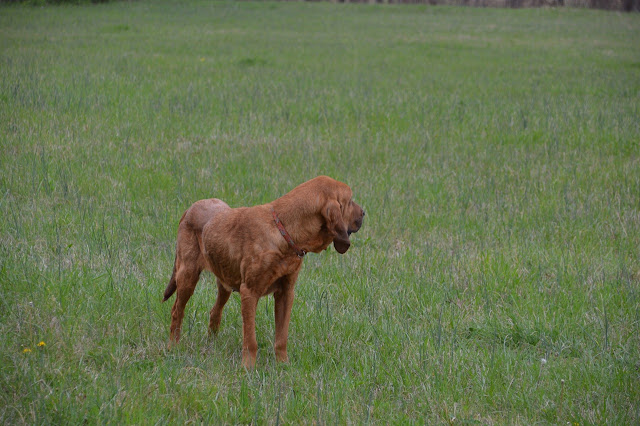 Sadie had been walking next to me almost the whole way. To get this picture I had to go to 18mm and then step back just to fit her in the view finder since she was that close to me. 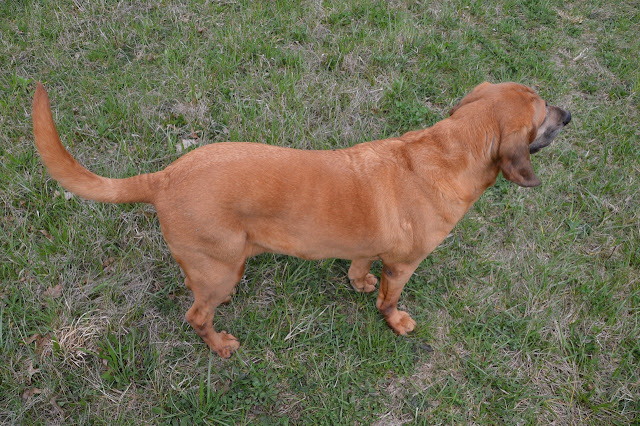 While Sadie walked on my left side, Stella slowly followed behind me and I also was barely able to fit her in the view finder for a picture. 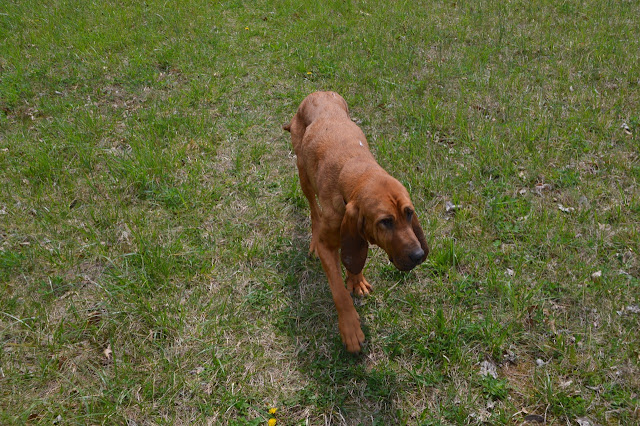 What I call the halfway point, or the to last turn toward home in back of the field ... both of them stopped and didn't want to move. It wasn't hot where they needed a break, I think it was just lack of interest. 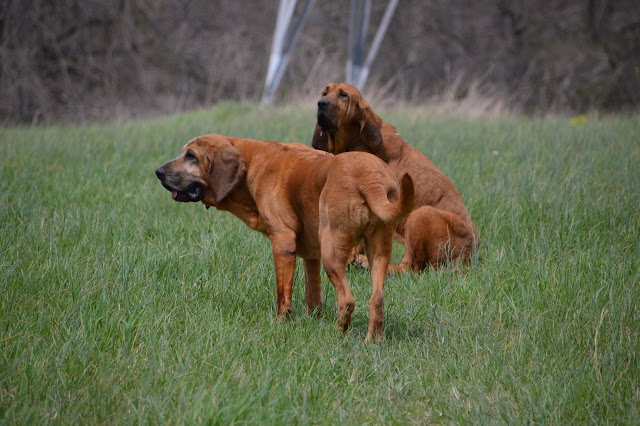 It took some coaxing but both of them made it back home, walked inside and fell asleep within minutes. I guess they needed a mid afternoon siesta worse then they needed a walk. 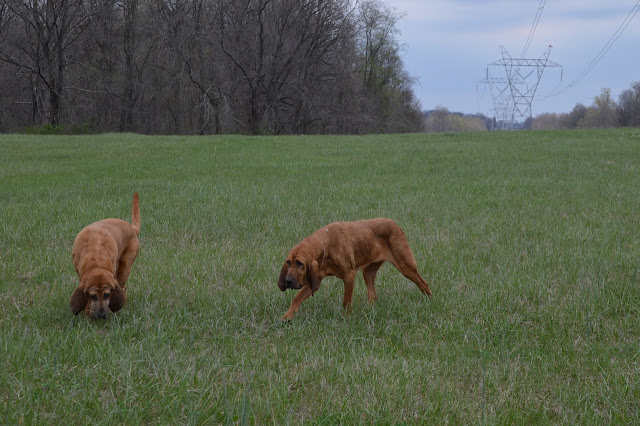 I am starting to get a little excited about my internet upgrade, scheduled for tomorrow between 10am-noon. I'll be interested to see what a download speed of 40Mbps looks like and if I really do get those kind of speeds. I'll be sure to check it on Speedtest.net. I remember 3 years ago, the installer checked that site to check the speed right after he installed the system.

It's been a busy day but at the same time slow paced. I've knocked off a couple of things from the 'to do' list. Instead of using weed killer on the driveway, I used the weedeater to cut them as low as possible. In some cases I took cut them down to nothing. It does not look perfect but they will dry out as it gets hotter ... the good thing is the hounds will not be exposing their paws, noses or tongue to chemical residue.

It pays to get up an hour earlier in the spring, here in 'the tropics' of southern Indiana.
at April 10, 2017