The Hounds Still Get Two Walks Around A Thunderstorm 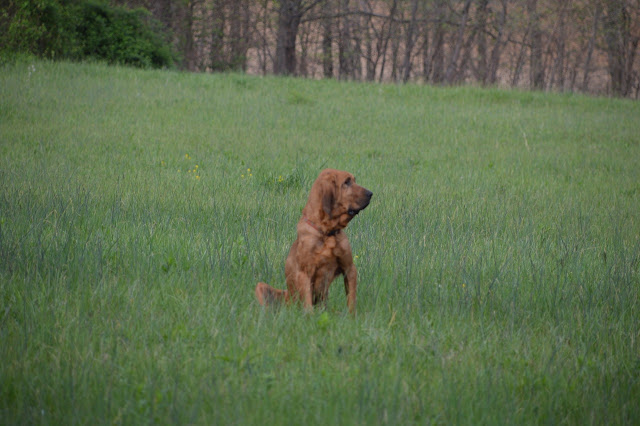 Stella decided to protest this morning when I caught her veering off in the direction of the neighbor's field. When I yelled her name, she stopped walking and stared at me. When I said "over here", words that she has been responding to very well these past few weeks ... she sat down and wouldn't move.
You may have noticed my front page to the blog has changed a little. Instead of one page with the latest post and 18-27 pictures all included ... I have manually added a page break. Then I changed my settings back to 7 posts per page.
I like the look of it and I am getting favorable feedback from a few readers that not only like the format but also tell me my blog loads faster and uses less data. 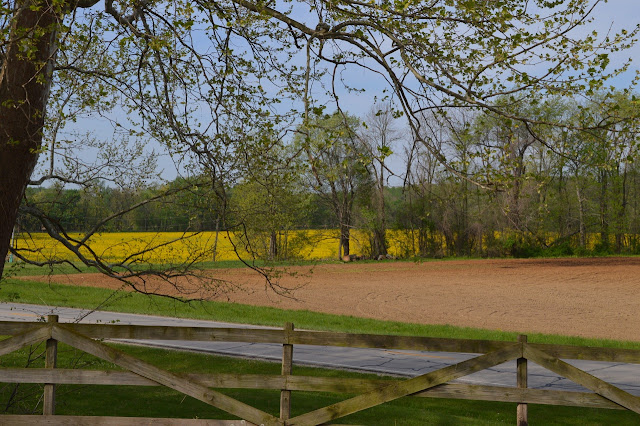 I really think I will stay with this new format. I just wish there was a different way to add the page break to pasts post all at once instead of one at a time. With that process I have done 21 posts or 3 pages worth and may not do any more previous posts. The current or future posts will slowly push the older format further back in the blog.

I also think with the new format, it will be easier to see when I make more than one post per day. Sometimes there are more pictures in a day that can fit on one post or more topics floating in my head than can fit in one post. So be sure to check for multiple posts per day sometimes. 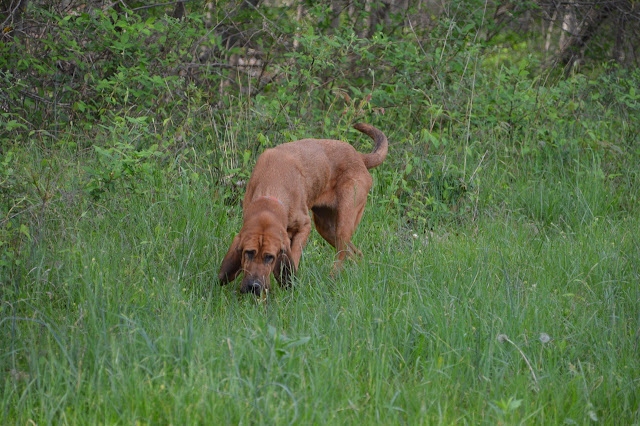 For some reason this morning I was more anxious to get the morning walk started than even Sadie. I had to asked both of them if they wanted to go for a walk, instead of the norm of Sadie standing and staring at me.

What a change it is to start your morning walk with temperatures in the mid 70's instead of the high 20's. Yes, I know that was months ago but I always remember those freezing walks. I am not a fan of cold weather. 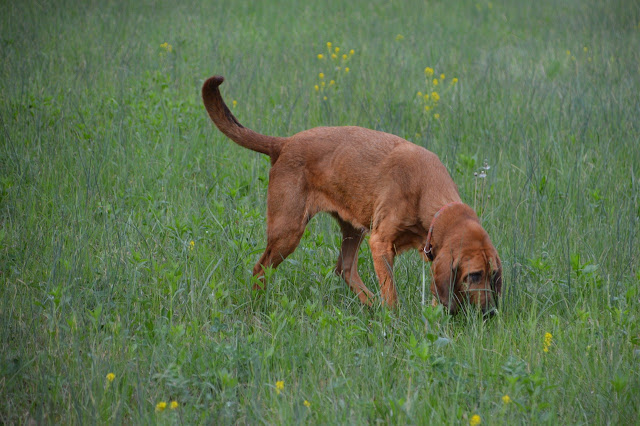 Stella decided to take it slower than normal this morning. I did not bring the 6' leash and in fact it is no longer thought about when we start to go outside. Like I said yesterday, most of the time she has been walking with us instead of her making trips to the neighbor's woods.

Again, Sadie was always too close for pictures. I think I found out why as we made the final turn home. 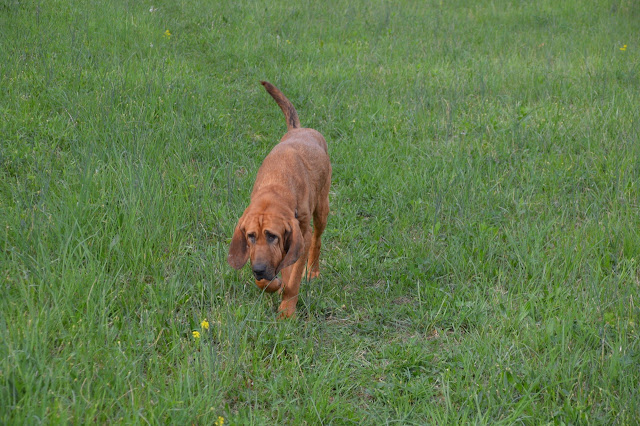 Parts of the field are growing by the hour it seems, while other parts have grass that is no taller than an inch high. I forget that it's only April and we will still have plenty of time before the hay gets tall enough to where the hounds are hard to see. 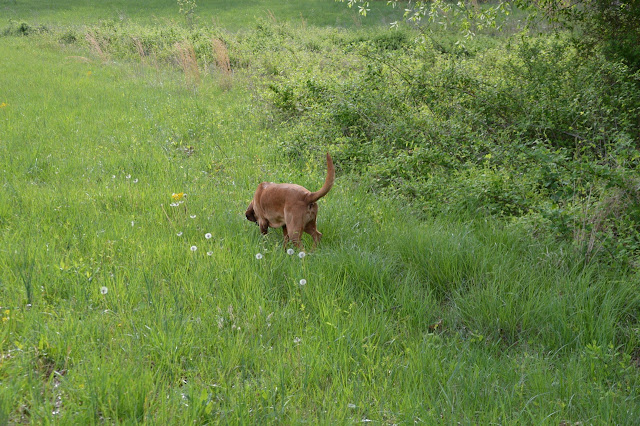 When I turned around and didn't see Stella, I assumed that she had gone past her boundary and was either heading down into the gully or close to the edge of the bank. I couldn't see her anywhere until I downloaded the picture, made it larger. Then I could barely see some of that bloodhound red hair dead center in the picture. 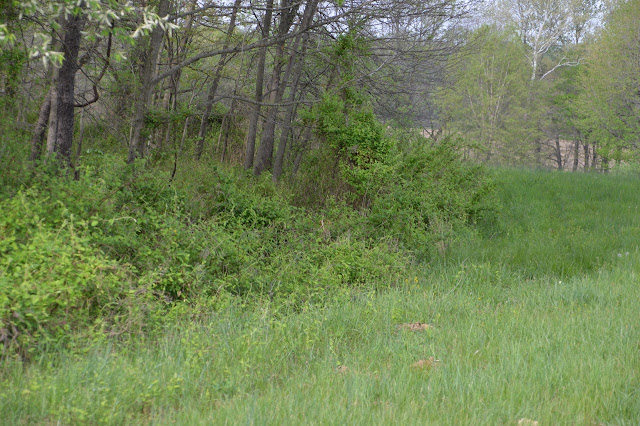 I was happy to see when I called her name, she came trotting out of the thick brush. 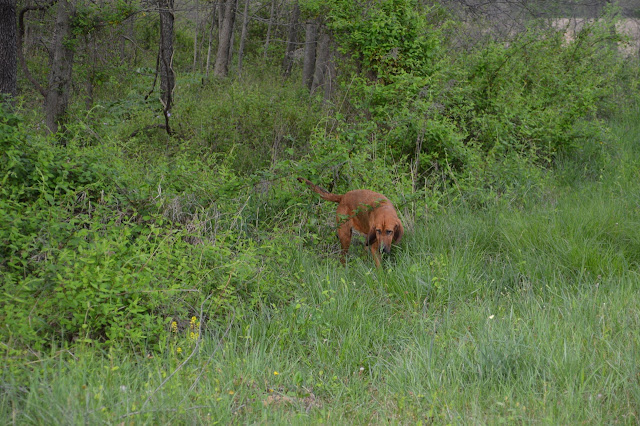 As we made the final turn home, I noticed a tick on top of her hair on her neck. Then after closer inspection found one digging into her ear. Last April was so much worse for ticks that I had a counter up in the left corner of the blog with a current count of ticks pulled off the hounds and me. 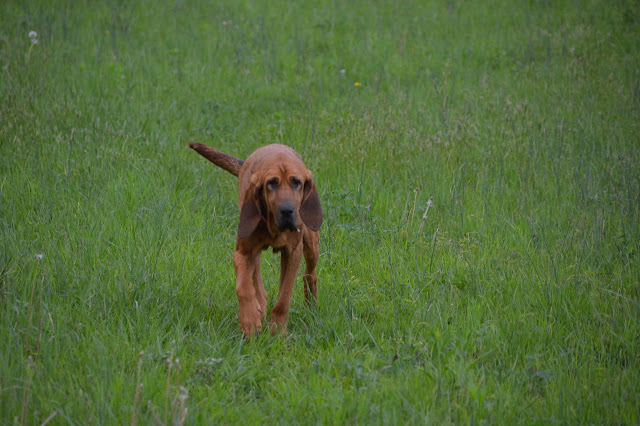 If they were on one hound, Sadie probably had one too. She always acts different when she has multiple ticks on her. I think that is why she kept walking so close to me this morning that I could take pictures of her.

She was more than happy after I pulled them off.

I decided to sneak out to Walmart before the hounds started howling for lunch. The rain/storms were not due until around 2pm and I wanted to make sure I was home when they happened so Stella had zero chances of freaking out. She has not made any damages while I have been gone in a little over 4 months !!!! 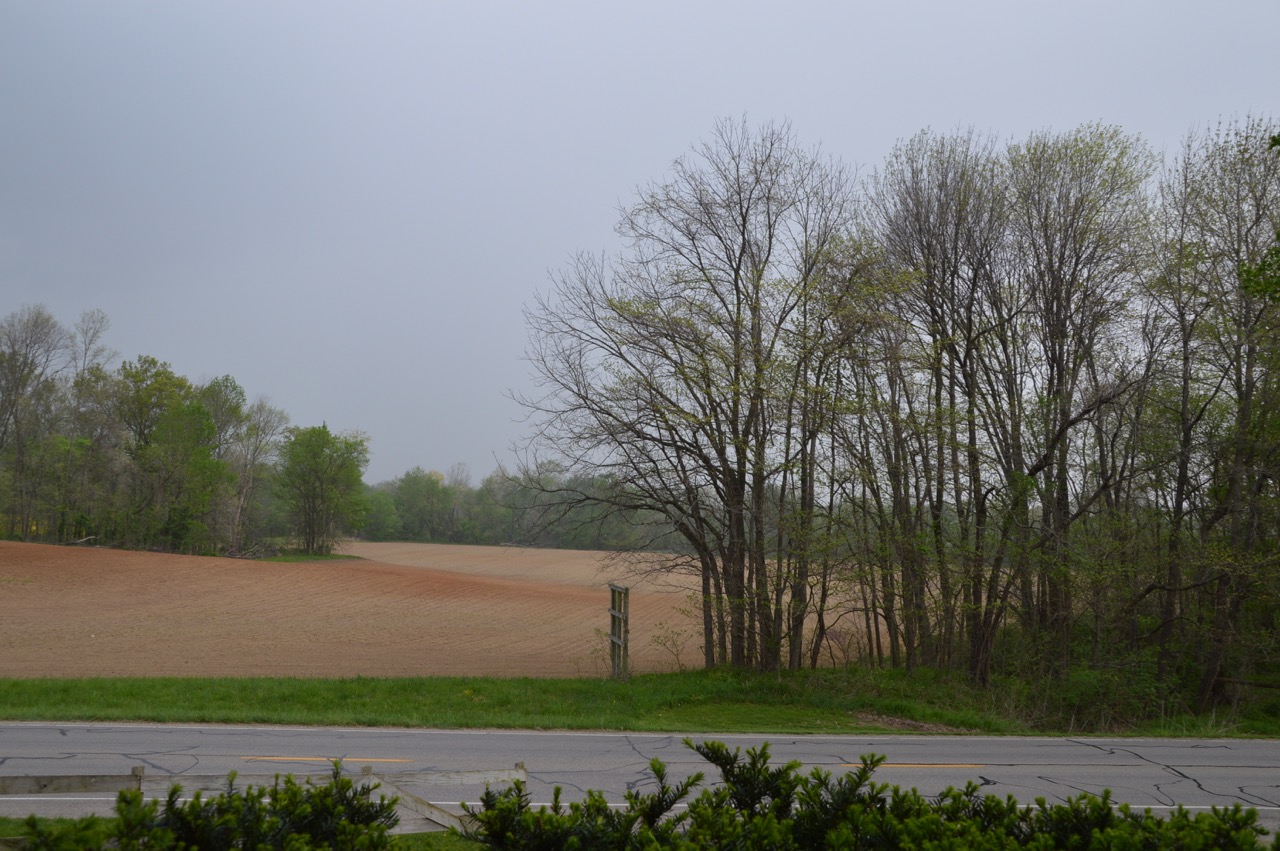 I made it back in plenty of time. The sun was out and I drove the Z4 over with with the top down. The more west I went the darker the clouds were getting. I was wondering if I was going to make it to the parking lot so I could put the top back up before it rained. I was only in the store long enough to make an exchange but when I came outside it had poured rain.

The further east I went the sun came back out and based on what I was seeing on the roads, it had not rained at all. Radar showed spots of storms in the Midwest. I just happened to hit one. 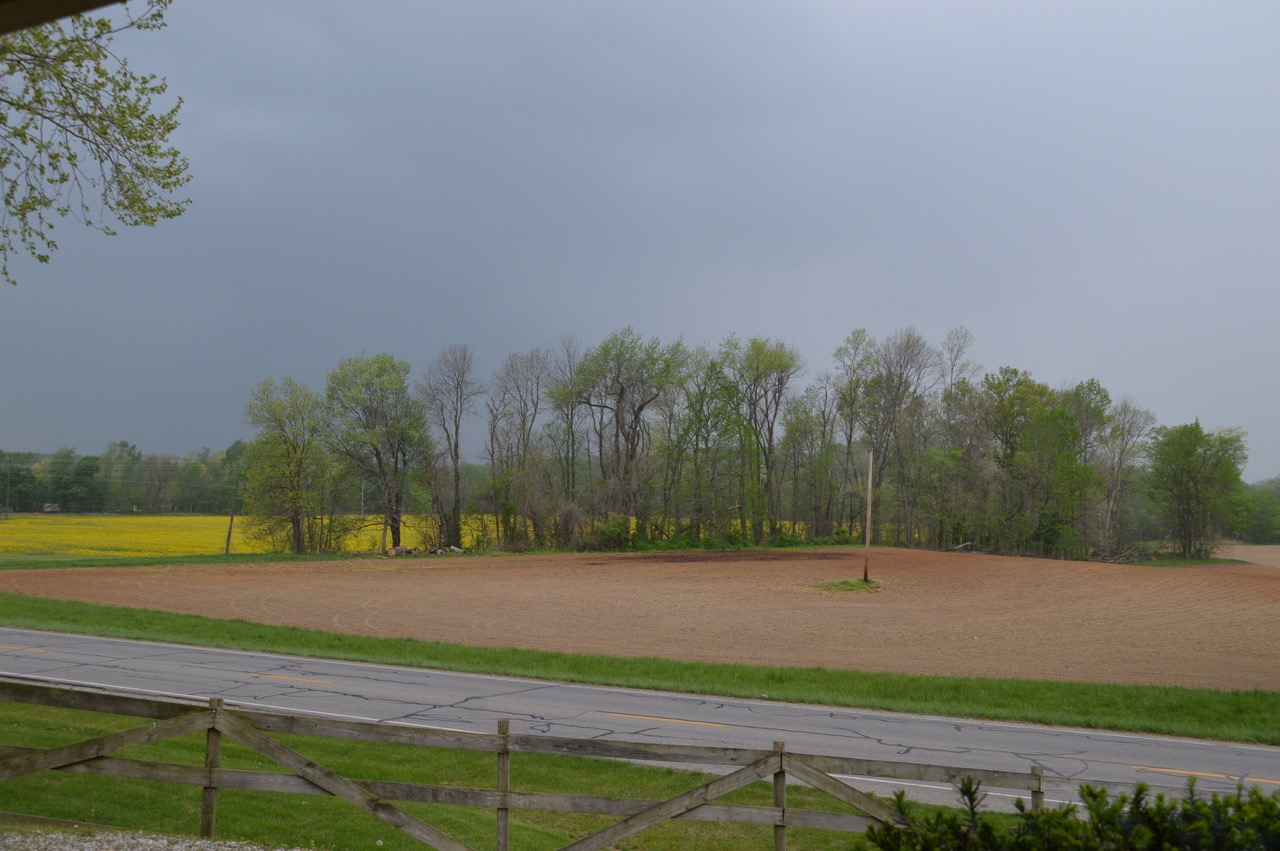 It was a different story at 1:30pm. The winds picked up, the smell of rain filled the air and Stella moved her sleeping spot over next to the big kitchen island to sleep under cover on the inboard side away from the windows. That seems to be a consistent storm spot for her. 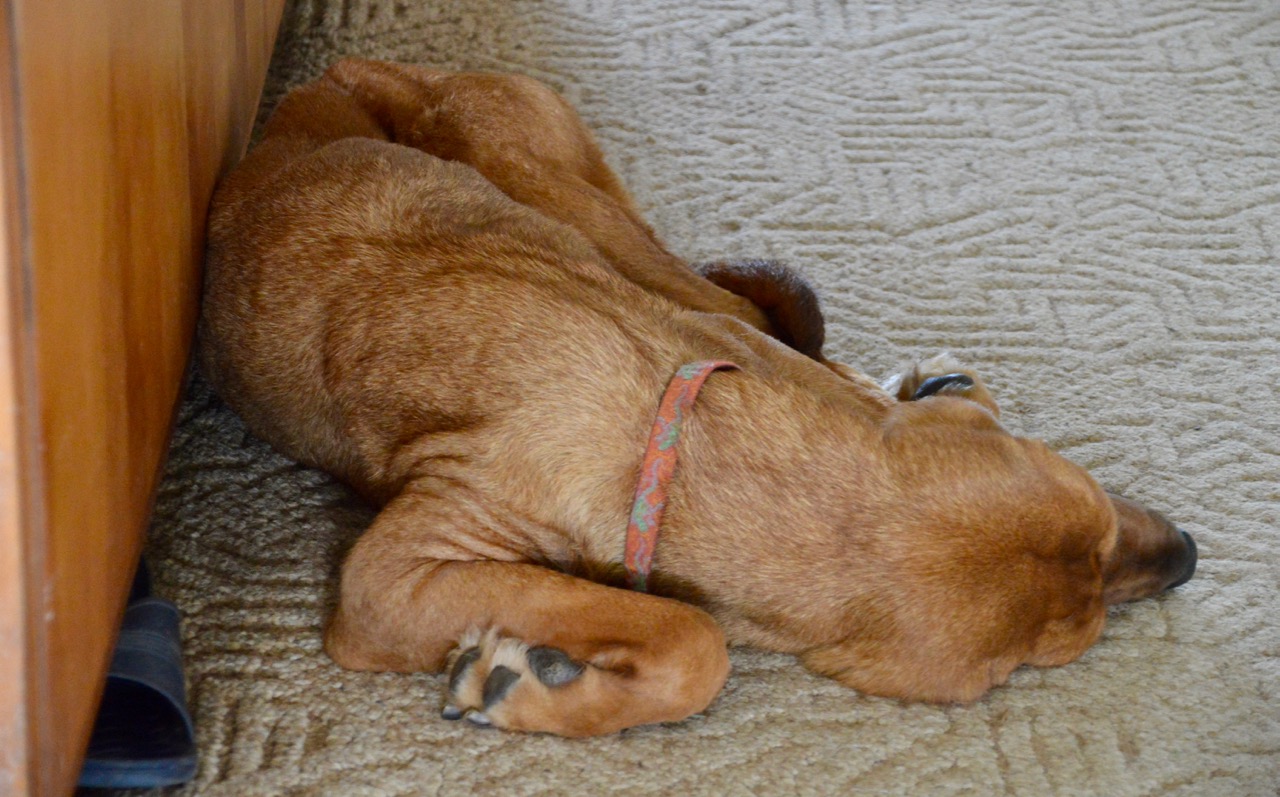 The rain was hard, it came down sideways and was gone within 15 minutes. Cold air followed it and it was cold enough to put on a sweatshirt for a short period of time. It still looked like it was possible for a fairly dry late afternoon walk ... in the meantime I wasted my afternoon away playing Mahjong and enjoying my view from the kitchen table. 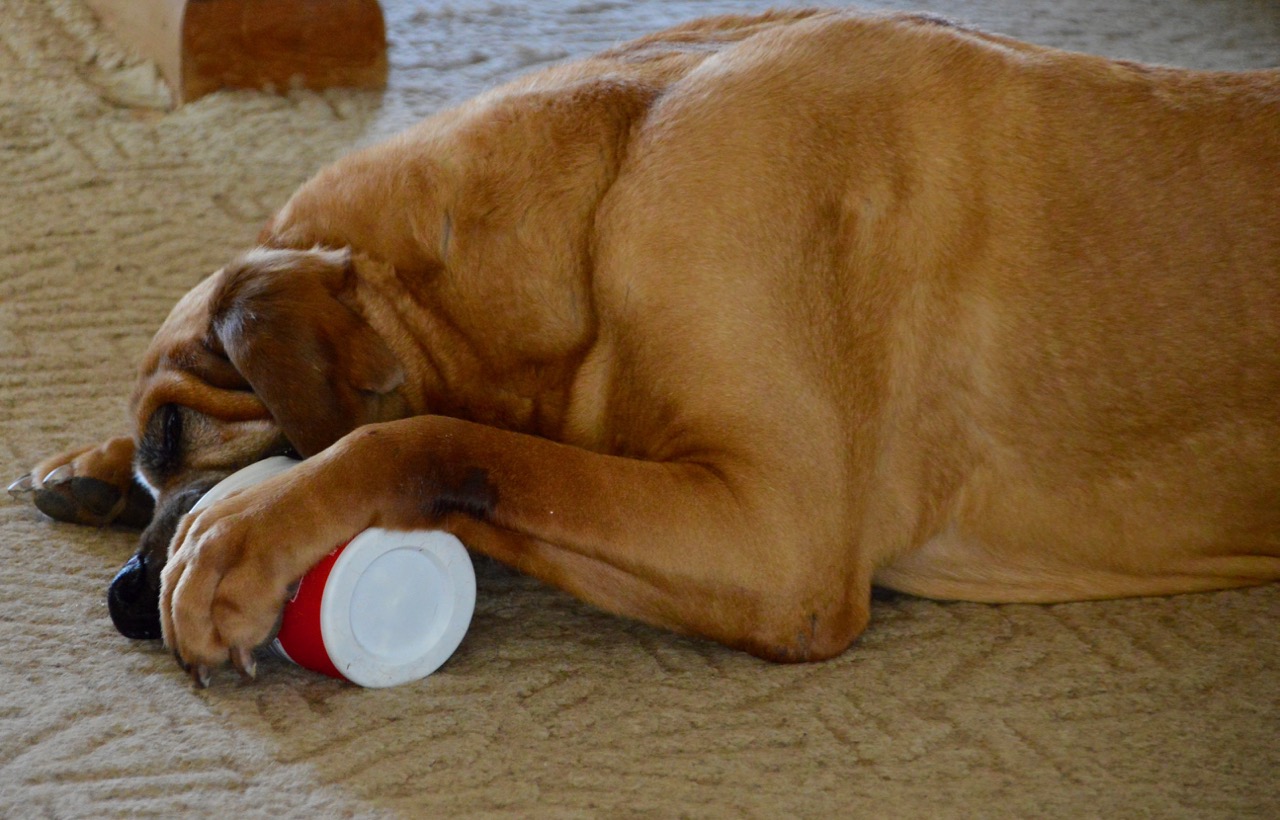 By late afternoon the sunshine was out and it felt hot outside. The backyard grass didn't see that wet so we took off for our 2nd walk of the day. Sadie took off from the start with all of that added protein she finished an hour earlier. 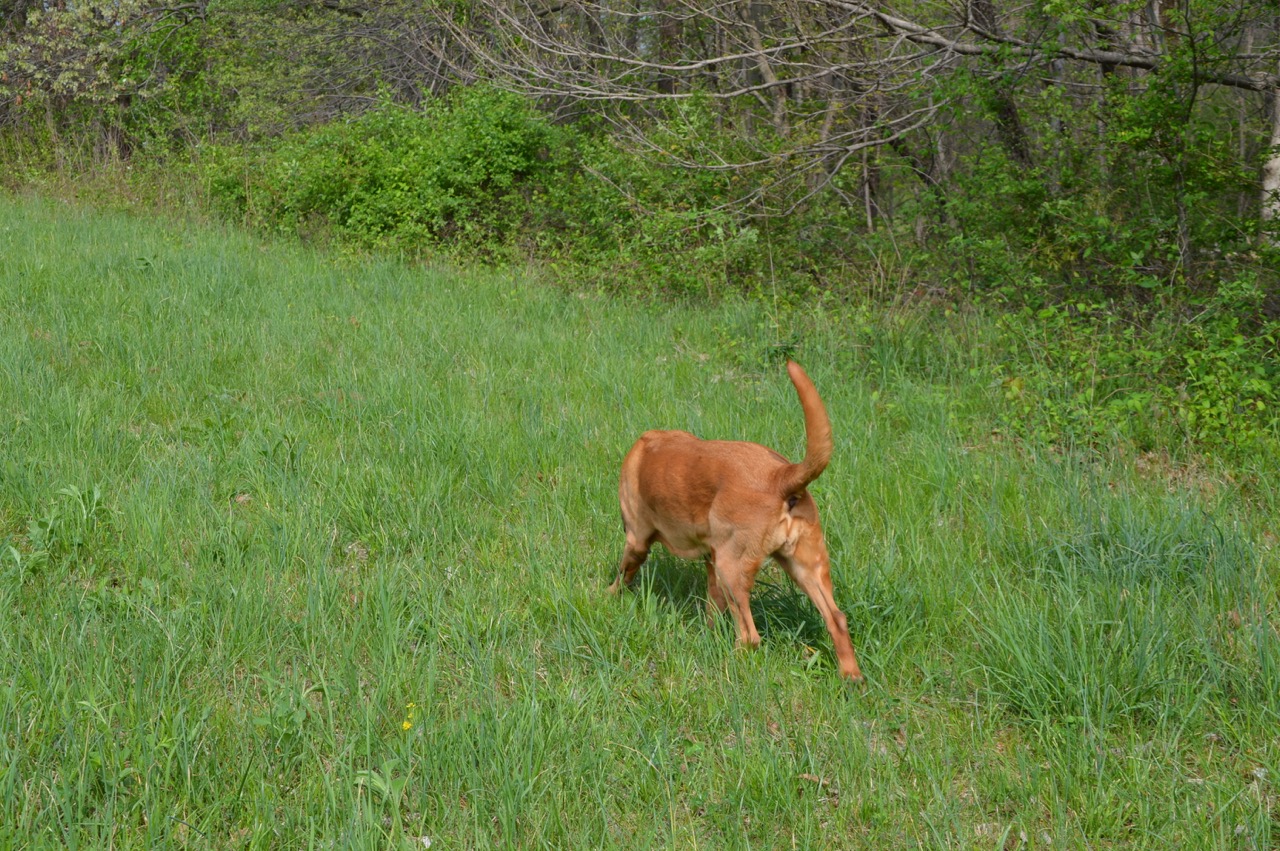 Stella did many stops to either investigate or to scratch. I am not sure there is anything to scratch and that it might be a habit. I think the habit option might be real because she will stop in the exact same places in the walk to scratch. 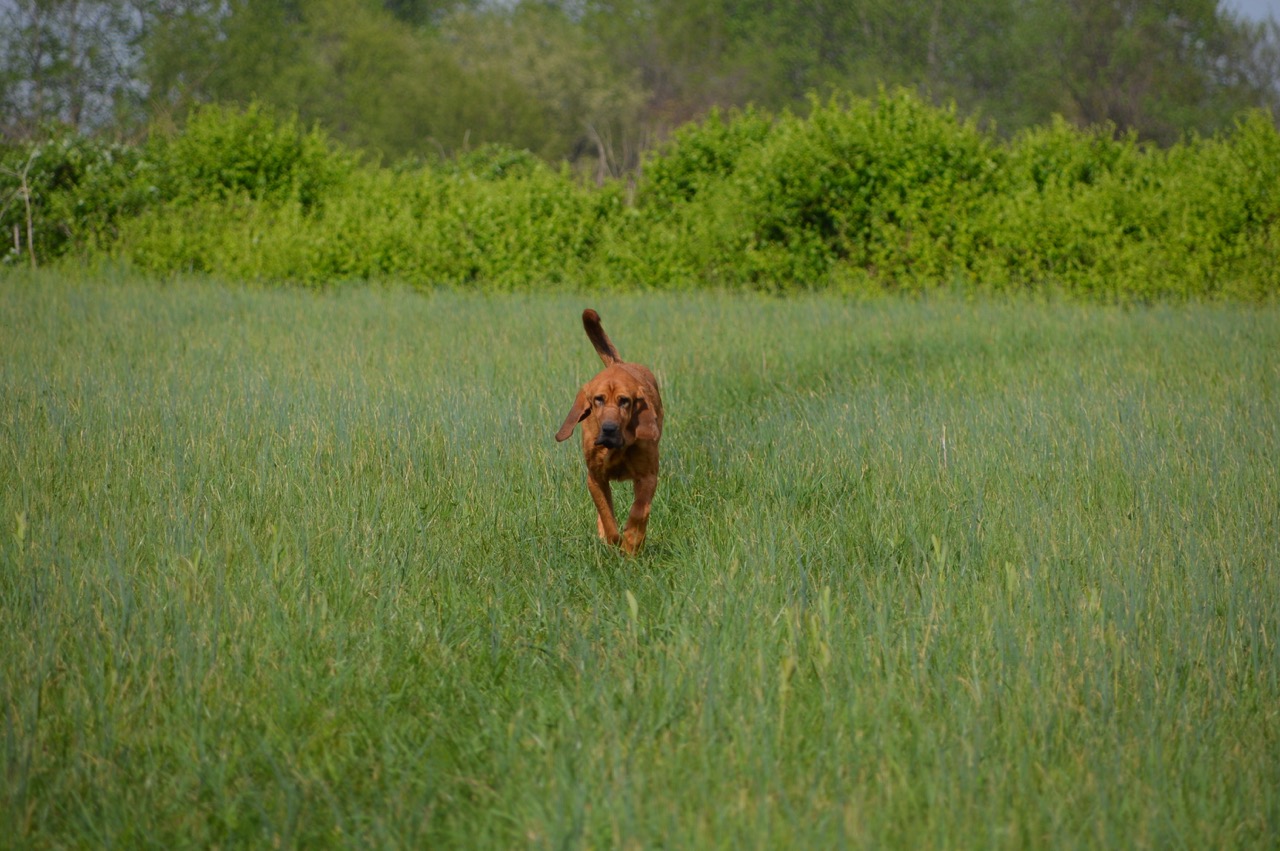 She was moving all over the field this afternoon and at no time did I have to give her a verbal command to follow us, catch up with us or move our direction. 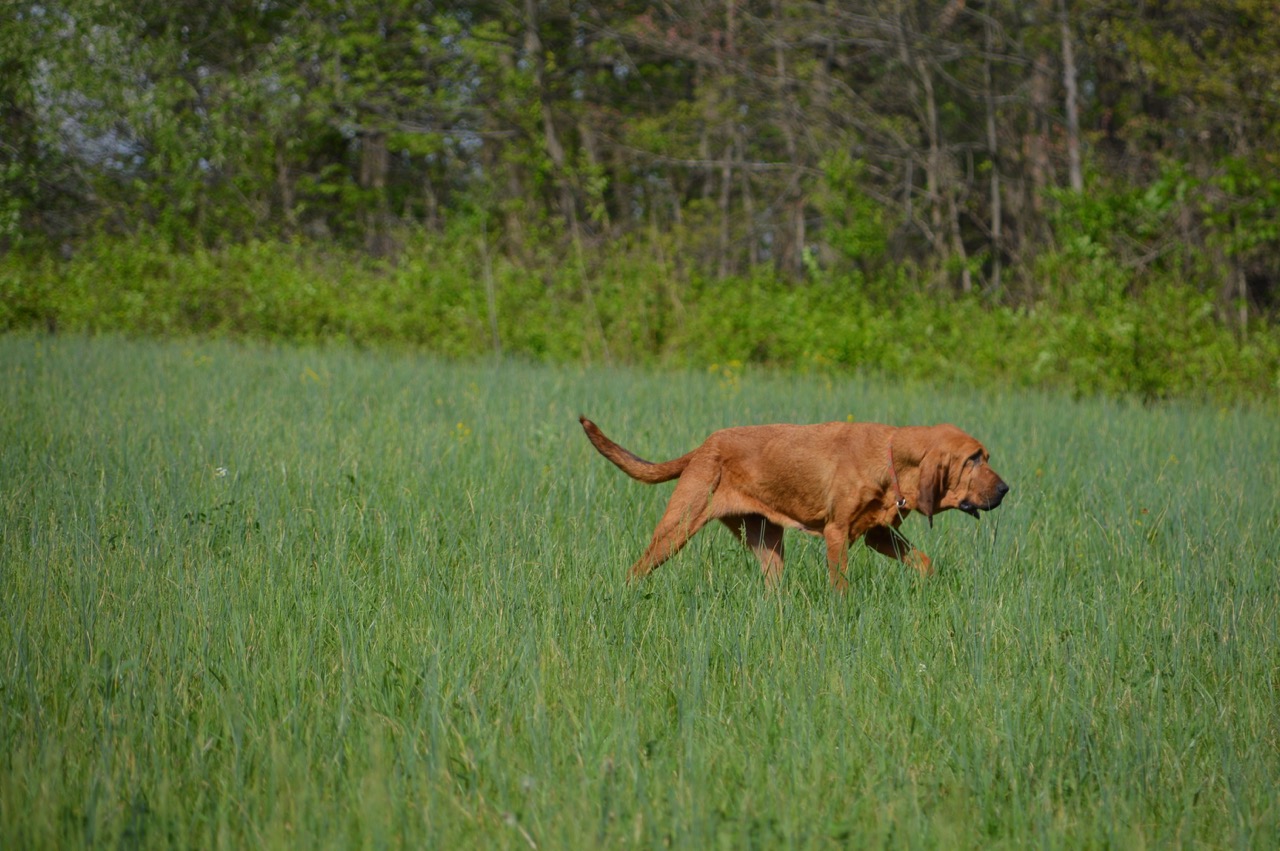 She slow trotted into the backyard, stepped on my foot as she ran past me and met me at the door wanting back inside. LOL ... she doesn't realize just how heavy that one foot of hers feels when being stepped on. 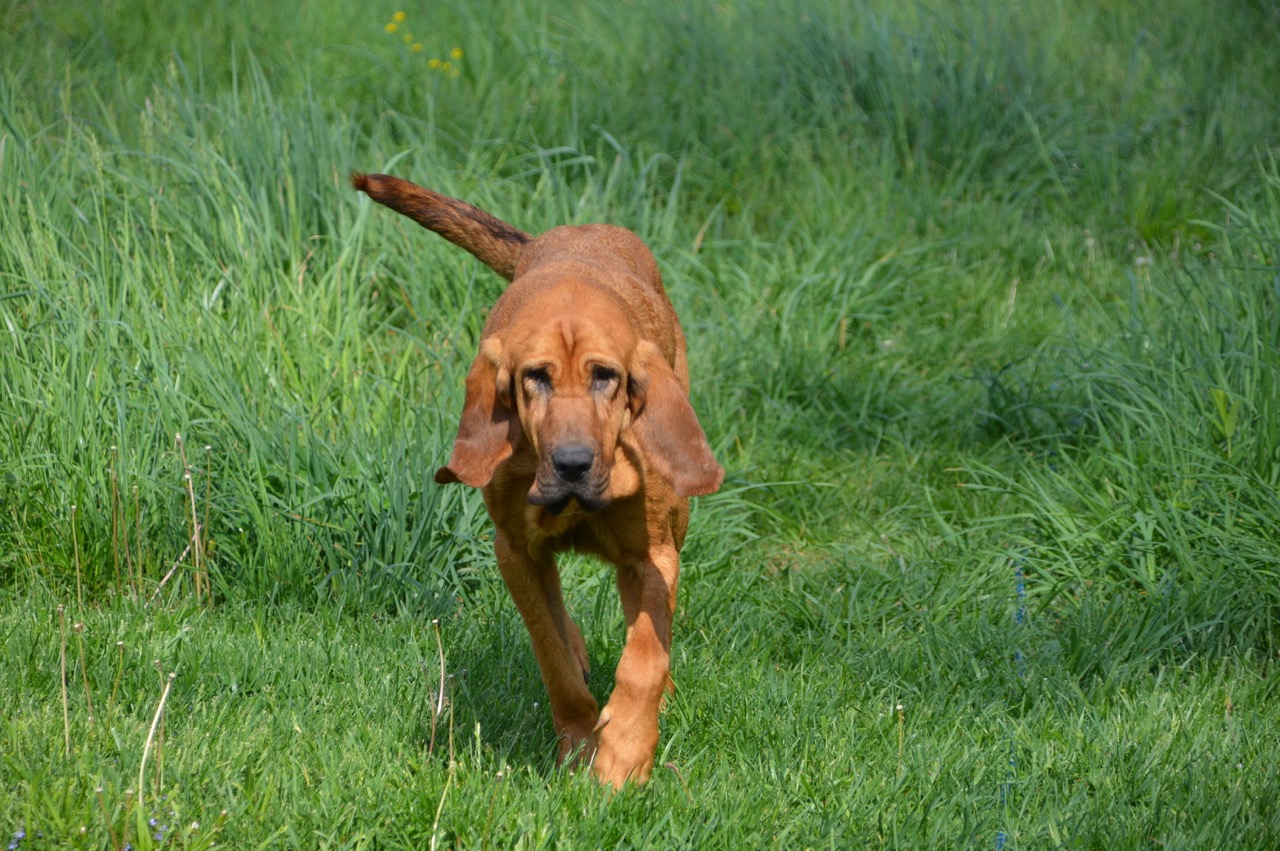 I can't see much more happening tonight but a little Cincinnati Reds baseball on FoxSports Ohio/Cin and more cold ice tea. We've had a good thunderstorm, two hound walks, lunches and a short trip to WallyWorld ... quite a day.

Retirement is good here in 'the tropics' of southern Indiana.
at April 20, 2017