The Lens Hood Makes A Difference 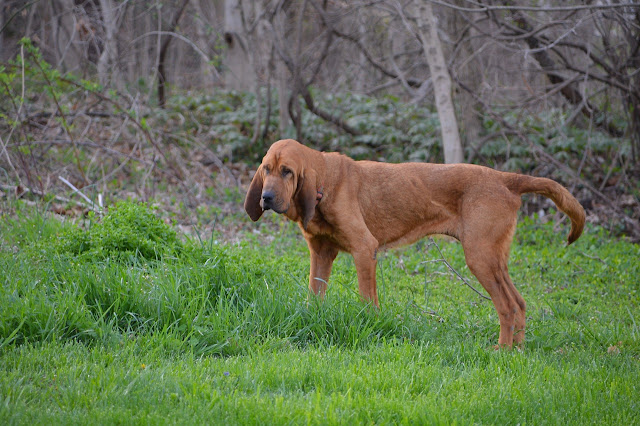 My picture experiment today was using the lens hood that came with the Tamron 18mm-200mm lens. I saw a difference just after a couple of photos, that would be the same type taken every day at the same time of morning.


After the hounds have their breakfast, Sadie, Stella and I go outside for them to dump their tanks and while my coffee is being made. I only take 3-5 pictures during this time. The small picture I use to post here of the field across the highway, then a shot in back as I stand at the corner of the house and some of the hounds if there is something to take. 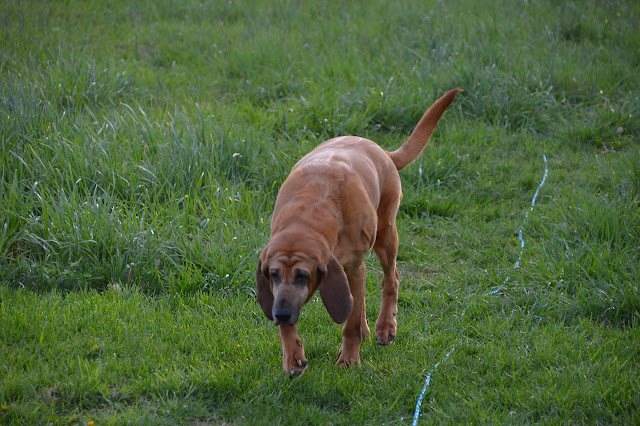 All of these pictures posted were not edited in any way and all were shot using the lens hood. I think that with this specific lens, the hood is needed at all times because the colors were being flushed out from the additional light. Granted we are moving from winter to spring. Things are getting greener by the day if not by the hour. Pictures taken in the winter months in the Midwest are dull and drab in color.  Yet during those months the color of the hounds did not stand out unless I enhanced their color when I edited the pictures. 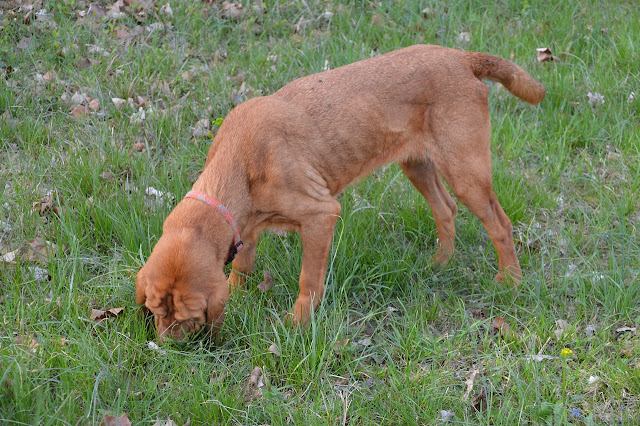 Stella decided it was going to be one of those days where walking was not her main priority, nor was tracking deer scent. After she moved from the spot above, this is what I found in the picture below. There was nothing there but the wet leaves from where she had been licking. 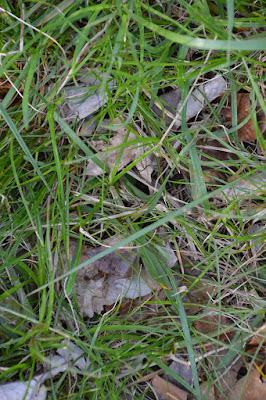 Sadie was on her own schedule and was always pretty far ahead of us, even after she would backtrack and wait on Stella and I. 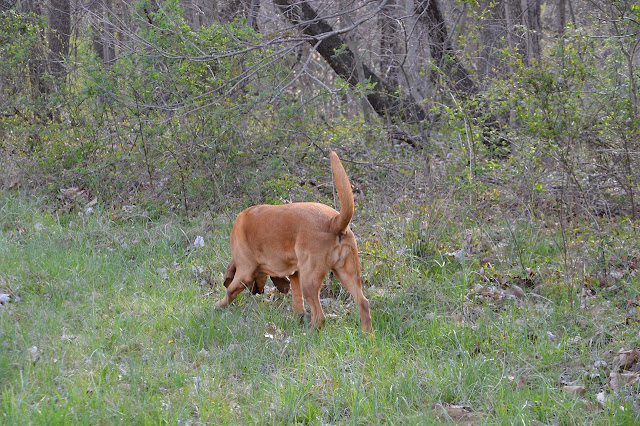 I believe whoever or whatever was chewing the tree limb decided enough is enough and moved on to some other delicacy. 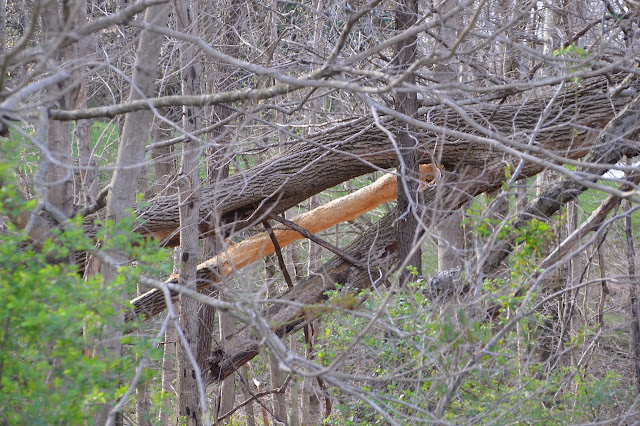 I was trying to decide while I waited on Stella if I should just walk on with Sadie and let her do whatever she wanted but I did not want to go get her near the end of the walk. Most likely she would have ended up by the neighbor's wooded area. 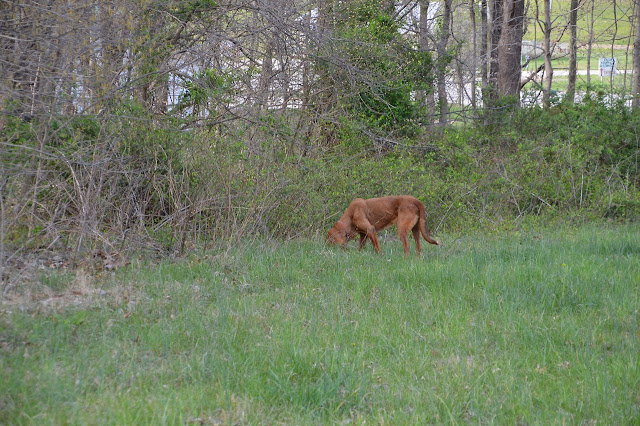 While Sadie was showing more energy than normal ... 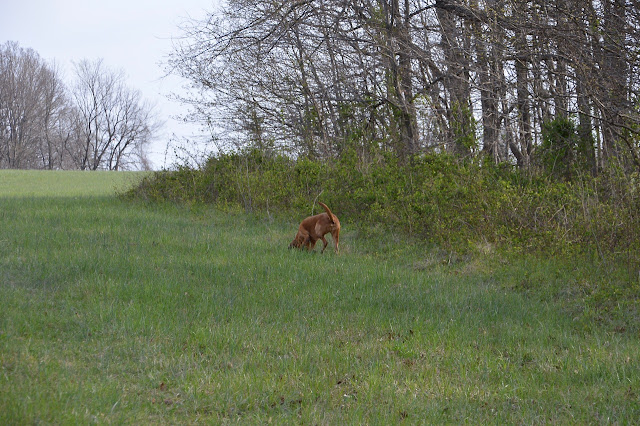 Stella was walking and moving in an extra slow gear. I could almost hear her dragging her paws on the ground as she slowly walked along the edge of the field. 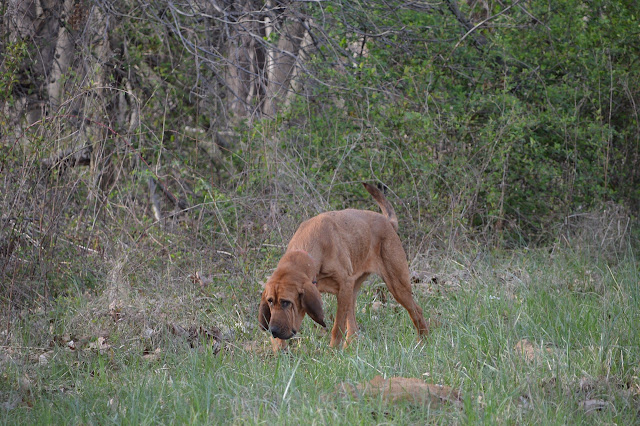 By the time I took this next picture, Sadie had already been up to the far right corner to check out the 'deer highway', then circled back to get Stella and I. That did not matter to Stella, she was on her own pace today and wasn't going to change. 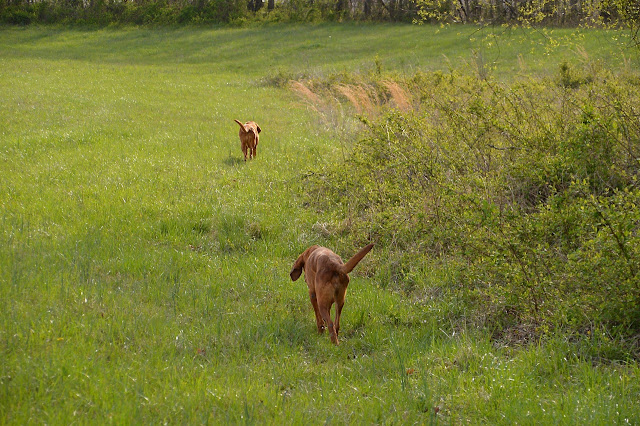 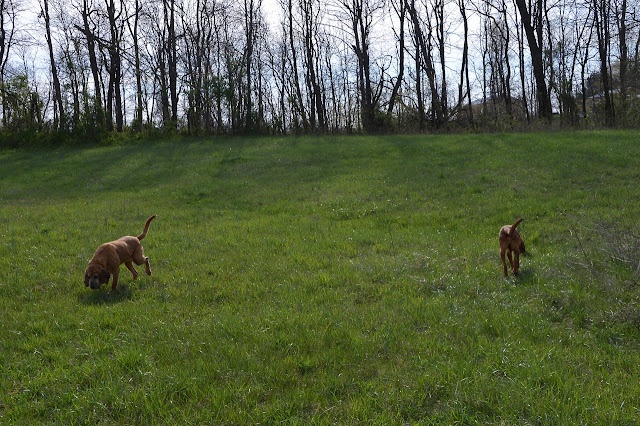 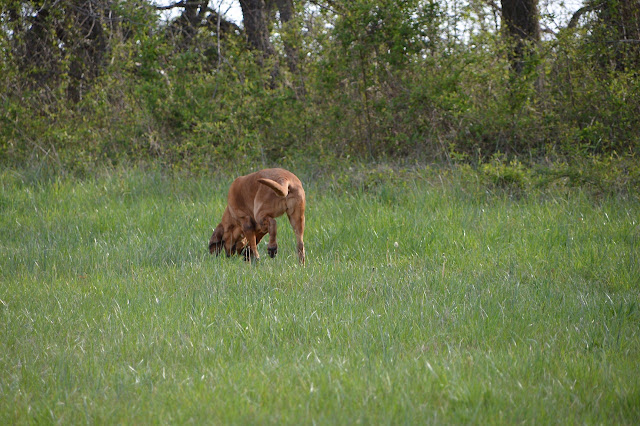 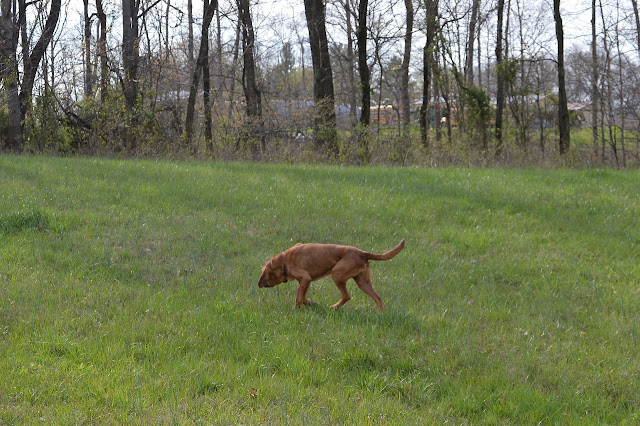 Neither hound had any urges to take off out of bounds and as I turned the corner to head home they spent the majority of time walking right next to me with Stella right behind me, out of camera range. I had to stop and wait for them to get this far in front of me. 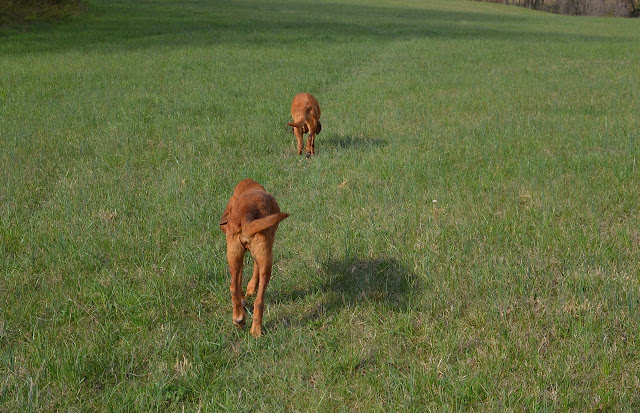 I believe you can tell just how slow she is walking. Each step is slow and once again she was falling behind Sadie. Based on the starter growth of the field and lack of weeds growing, it looks like their first cut of hay will be one of their best quality in June. 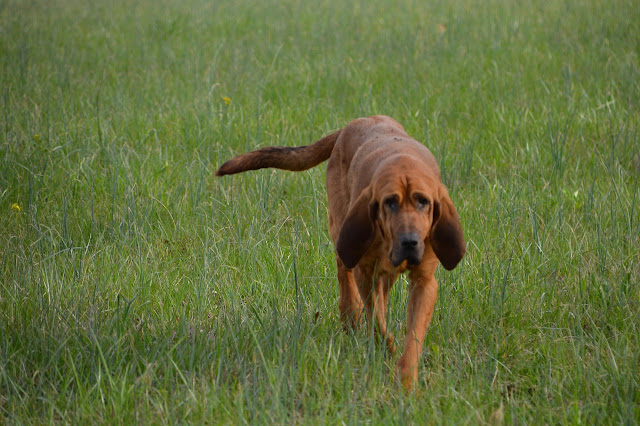 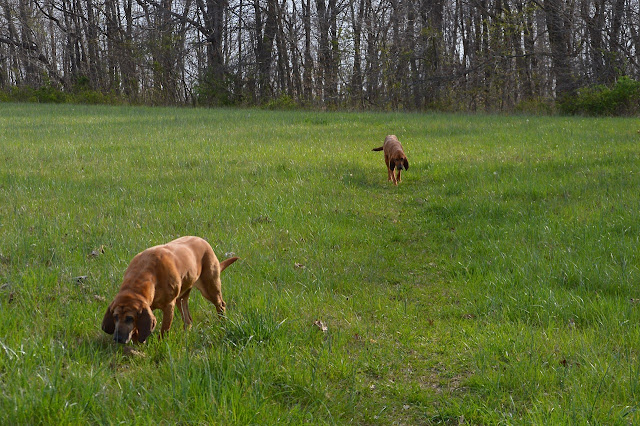 With temperatures headed to the 70's we were going to make a couple of more walks, fix the three screens that Stella destroyed last summer and do as much outside as possible. 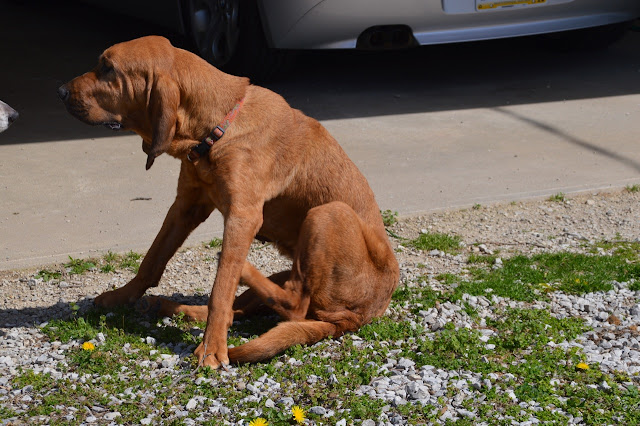 I was off to a good start, with the 2nd hound walk complete right after their lunch, I went to work on repairing the small screen windows with new screen on two bedroom windows and one spare. 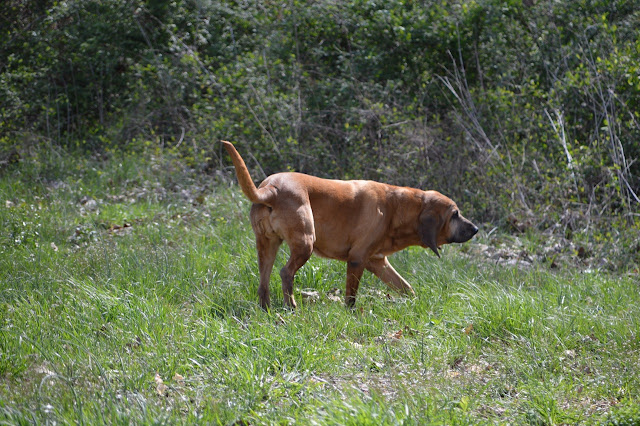 This is the new grass I planted a few weeks ago, really about a month ago. It survived freezing temps a few days after I planted seed the first time. I spread some more seed, then the heavy rains came. So I spread the last seed I had in the bag I bought in early March. It is filling in the bank quite well and looks to be right on schedule. It will look good next spring in 2018. 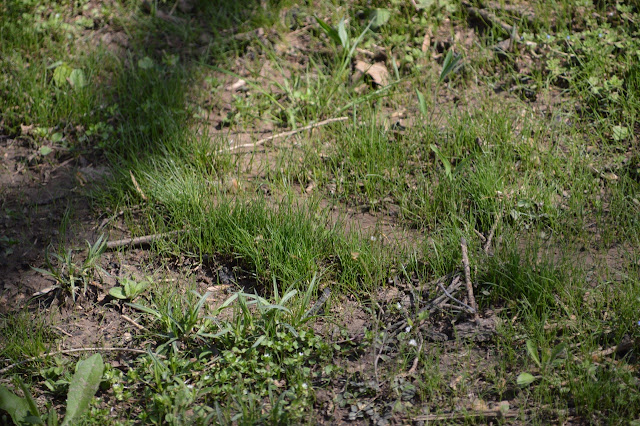 All the photos taken this afternoon were with the lens hood on, no editing. 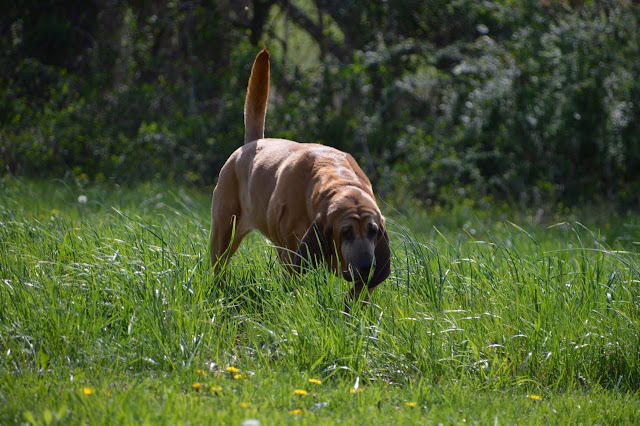 I found out last summer the hard way that Stella was the escape artist they claimed she was. I made the mistake thinking there was no way she could crawl through a window that was only 16" tall and 39" off the floor.

By the time I returned from my Z4 drive with the top down, she was sitting next to the FJ, panting, ready for me to let her back inside for some water and a nap.

If I don't have any more memory lapses when I get ready to leave the house, and make sure the windows are closed, then these new screens should last another 15 years like the others did. I guess there is one advantage of repairing them ... they will not have be cleaned with the high pressure washer in a few weeks. 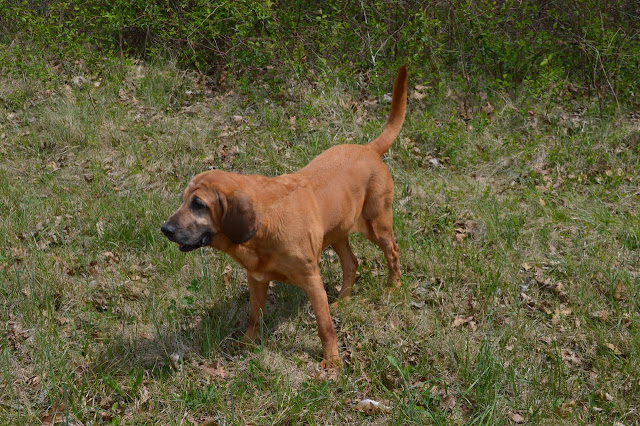 I was at a good pace, getting things finished, and checking a few things off of my long 'to do' list, until I stopped at 2pm to eat some lunch. During the time eating a salad, a small carton of Chinese food, I remembered the final round of The Masters was on tv today. I usually watch the last 4-5 holes.

Around that was the Long Beach Grand Prix Indy Car race, 85 laps on a different tv channel. With some slight stiffness in my lower back from doing something as simple as repairing the screen windows I thought it might be the perfect time to cancel the rest of the list for the day and my rules in retirement. That rule is not to do more than one 'major' thing per day. LOL No schedules and no rush. 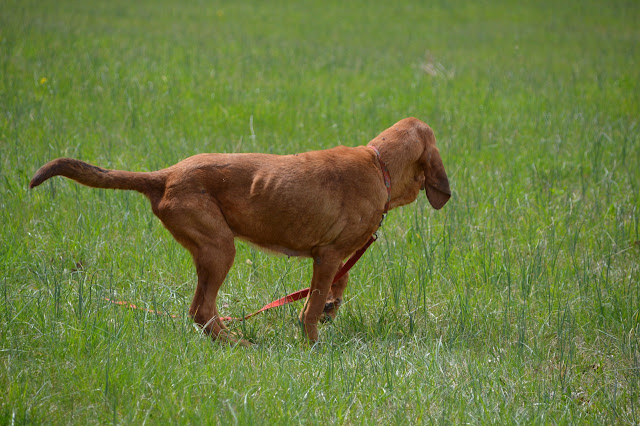 In the meantime we headed out for our 3rd hound walk of the day but cut it off short. Neither hound seemed too enthused and it ended halfway to to the first corner when Stella sat down looked at me and didn't move. So all three of us turned around and headed home. They both were sound to sleep within minutes after walking inside.

After looking at these pictures I am going to make one adjustment in the camera settings and set the light setting to -1. That will brighten them up just a little and other than that I think I have found part of the problem and it was the light that washed out the colors while using the lens without the hood. I never used the lens hood with the Nikon lens but need to with the Tamron lens.

You can take a look if you want at my photos on Flickr. This link will show about 1,000 photos I've made available for public viewing. I have all my photos in Flickr as a backup. The reason I bring this up, I think you will see a real difference in the picture quality when they are not compressed by Blogger. Also my Wordpress blog does not compress the images I load and they are the same pictures I use in this blog. I think you will see a difference.

Thanks for the emails and comments about my picture blog post Saturday night. It's always good to get opinions from blog readers. Check out these photos from today and let me know what you think. Maybe I have solved the picture quality problem by using the lens hood.