The High Temps Hit The Hounds 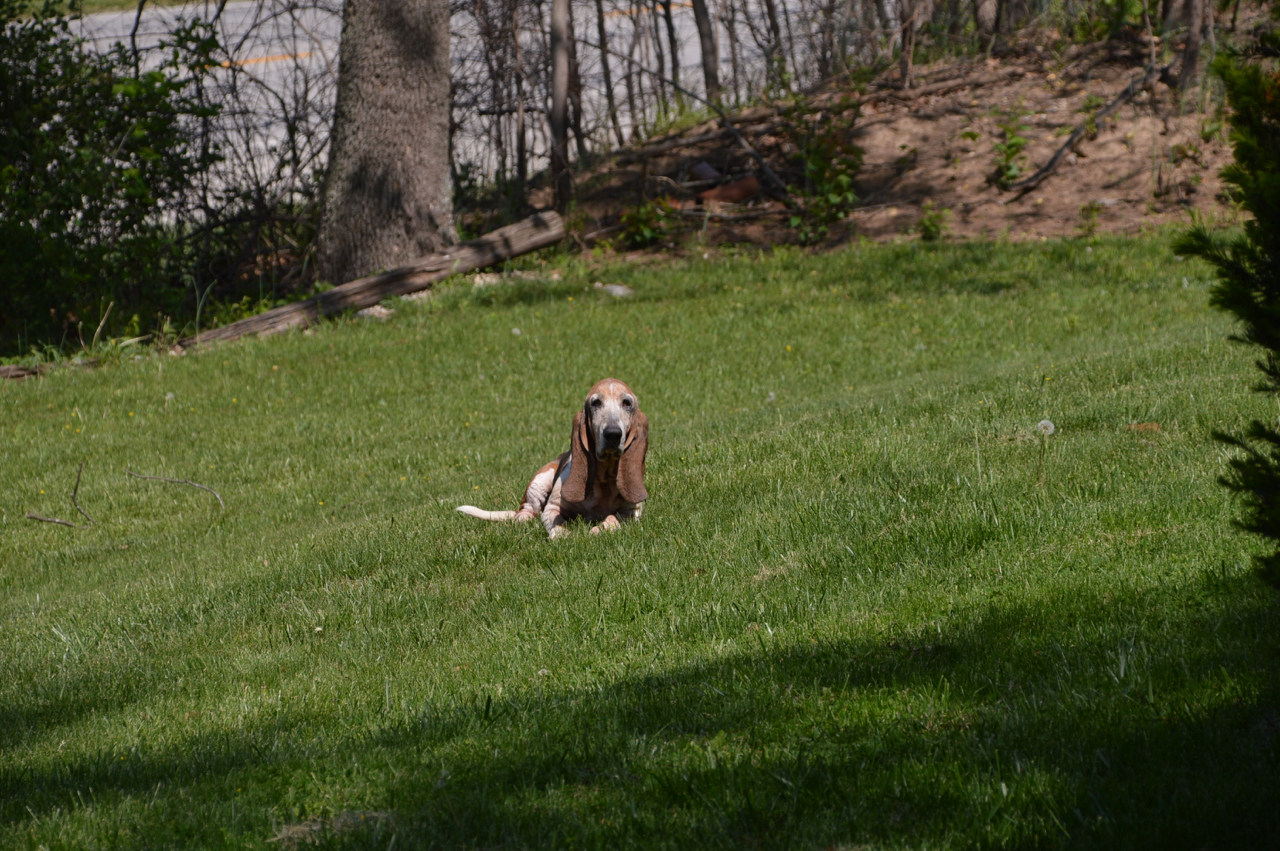 Heidi snuck off to one of her favorite places after lunch. She turned down an offer to go on the walk and did not move an inch during the 30 minutes we were gone.
Things went as planned this morning after I posted the morning post. The load of laundry went smooth and for the 2nd time in a row after not cooperating the time before that, the old wash machine went through the spin cycle without a hitch. Maybe that belt realigned itself.

The hounds were almost to the point of revolt when they did not get fed lunch when they wanted but I'm not going to feed them lunch at 10:30am. Don't you think that is a little early for lunch?? 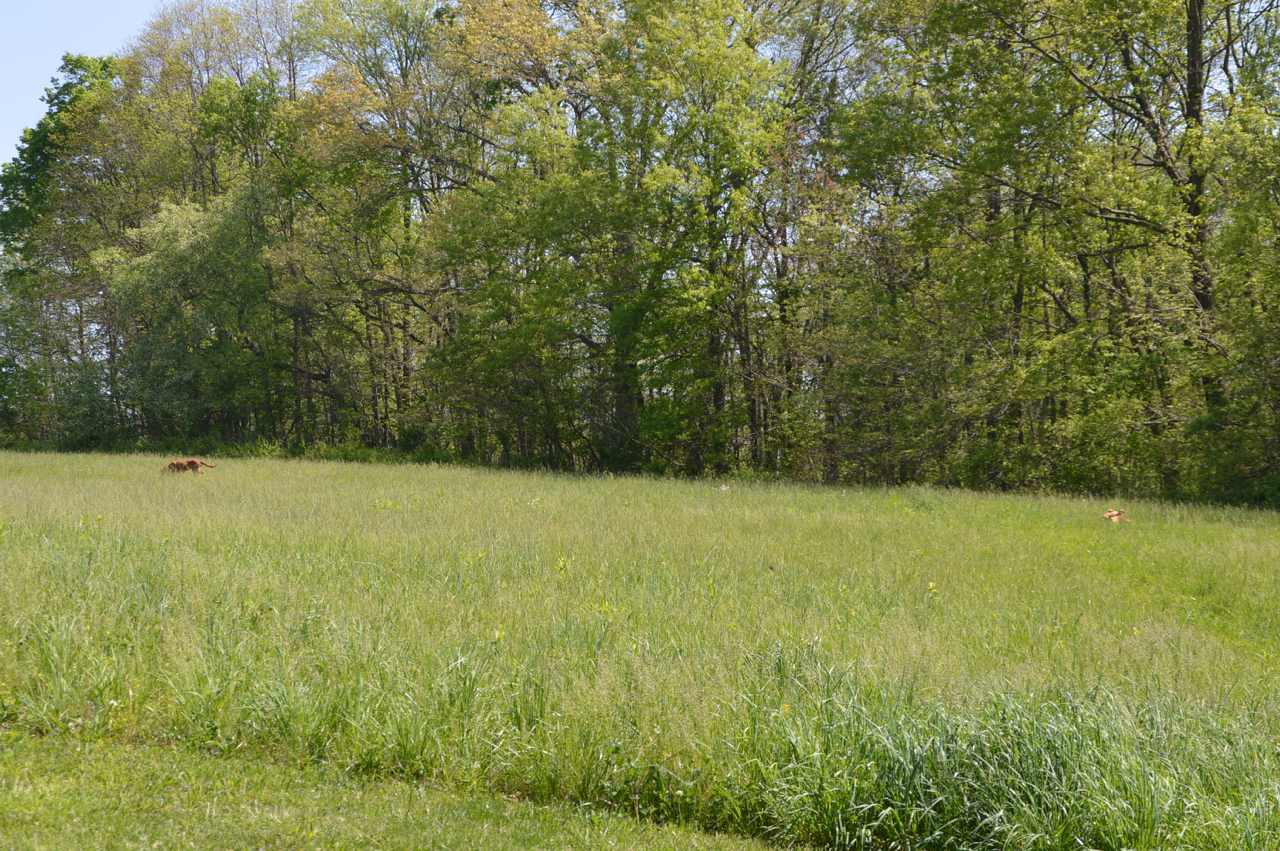 So by noon they were more than happy to run to their bowls of kibble. As always, all of us headed outside ... Stella found her a spot while Sadie needed to scratch her back by rolling on the hot grass. You can barely see her legs in the air on the right side of the picture. 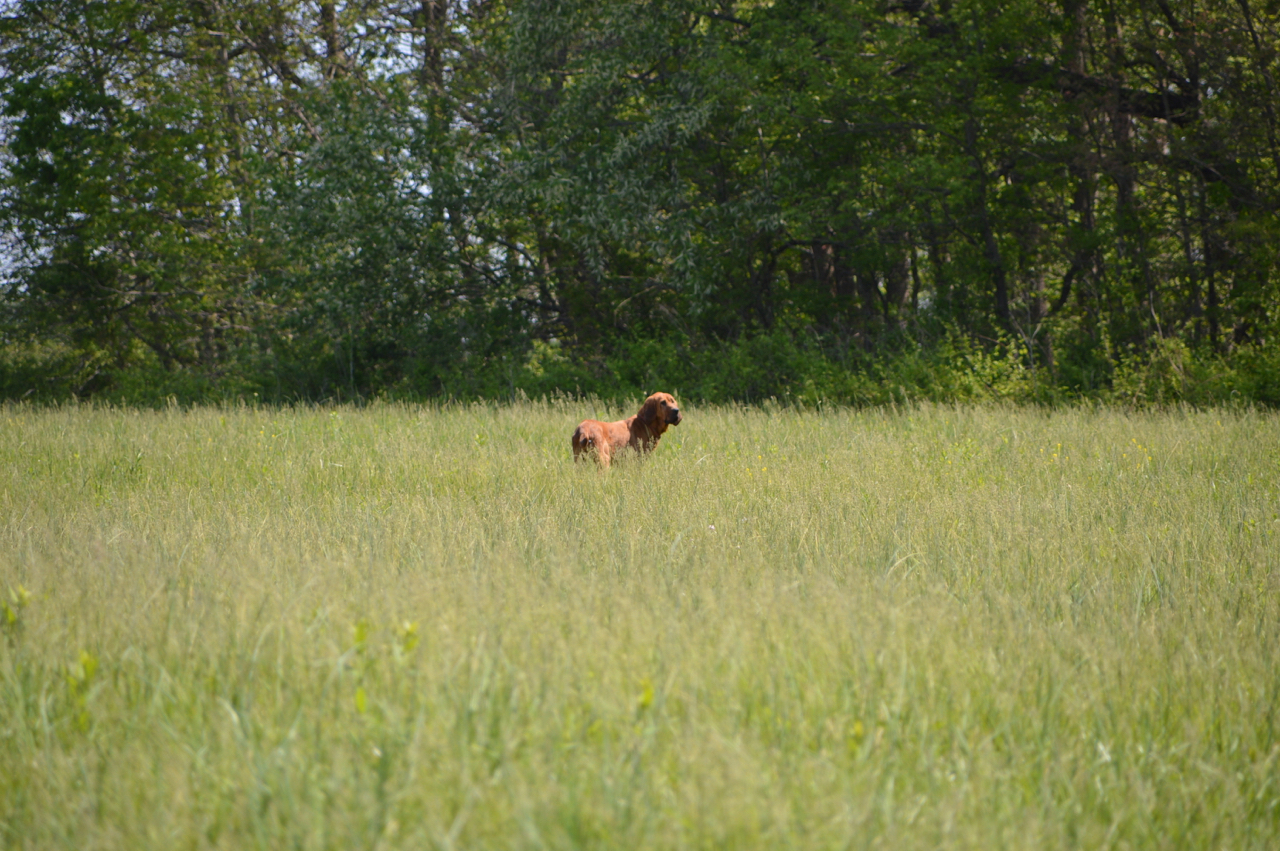 But they wanted more, not food ... they wanted to go on their walk right now, and not wait for a few hours. Stella looked at Sadie for the call. 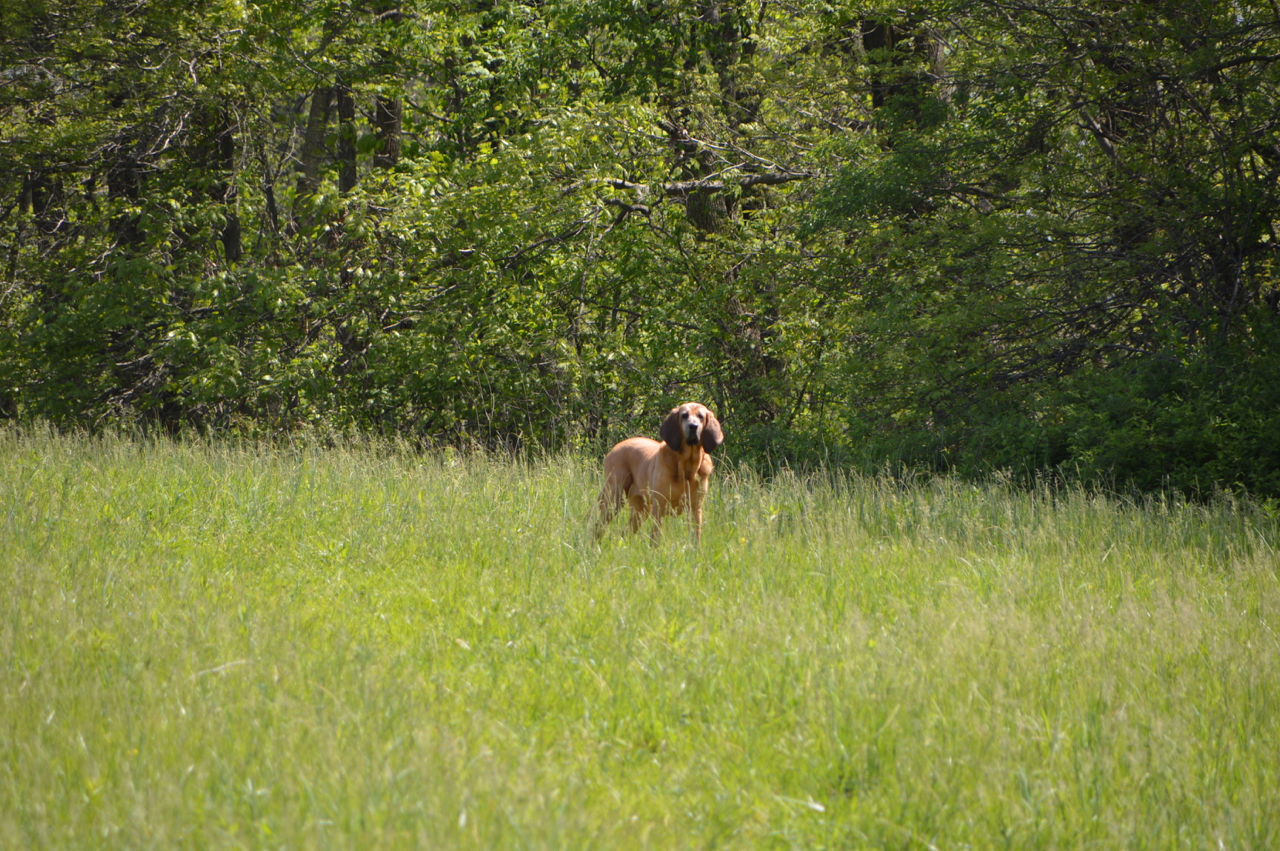 Sadie was already giving me her stare down but I knew they didn't realize just how hot it was. I could really feel the heat for the first time this spring. I found out later it was 85°.

I checked with Heidi to make sure she didn't want to go. Walking was not an option with her today. She had moved into one of her favorite spots out front and was going to enjoy the quiet sunshine for as long as she could. 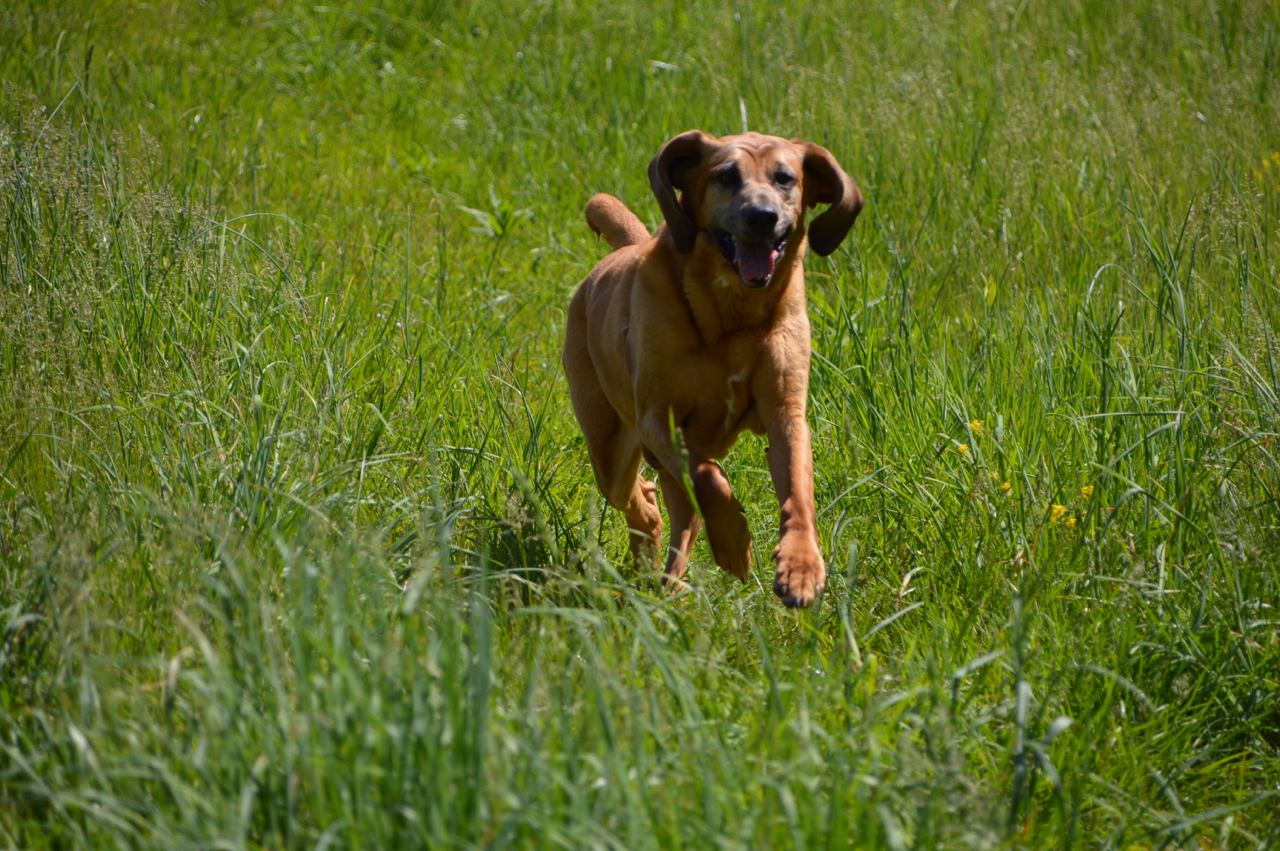 Needless to day, Sadie was more than thrilled when she saw I was walking toward the field with my camera in hand. She went from jumping up in excitement to hitting me in my left knee in a full speed sprint. 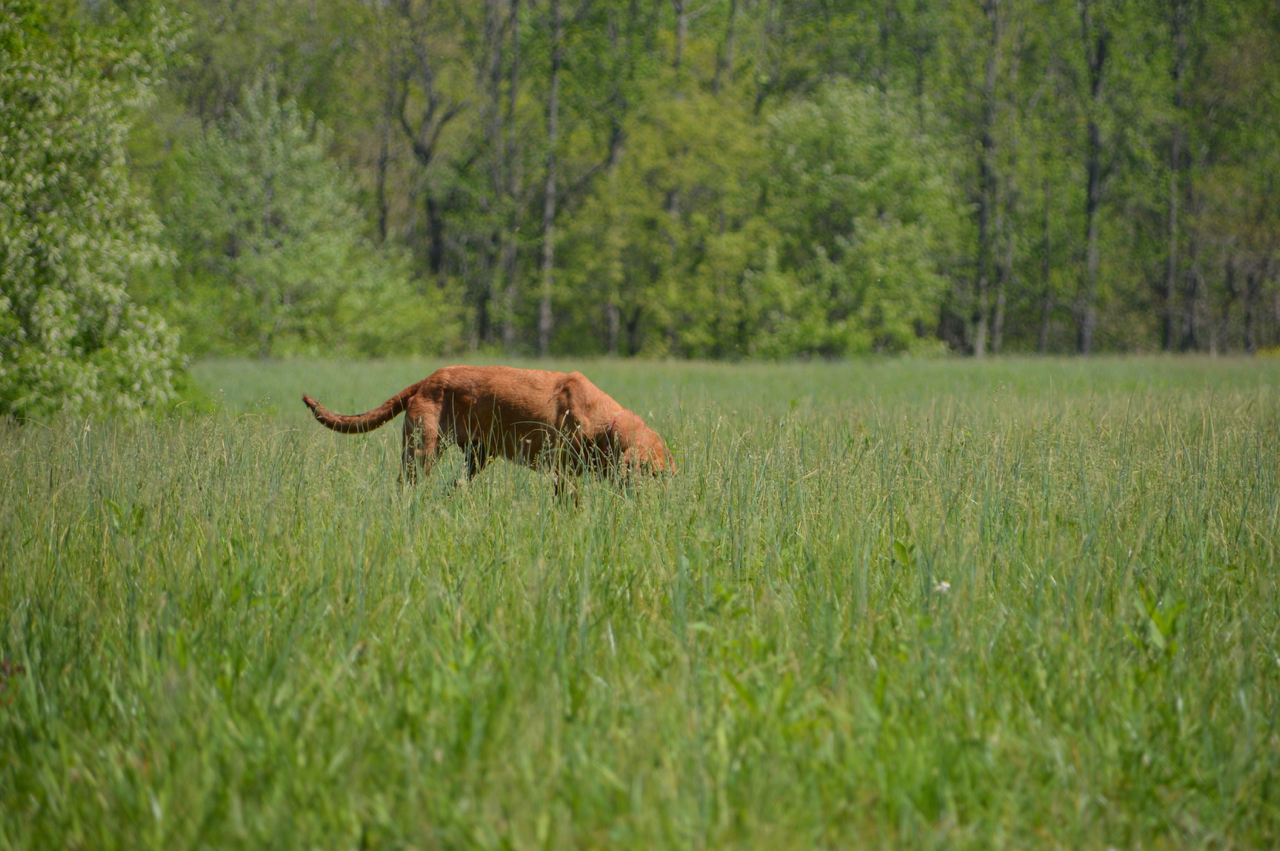 Stella did follow us this afternoon. I didn't think there was a chance of that when I saw her through the camera view finder. The hotter it is the slower she moves. 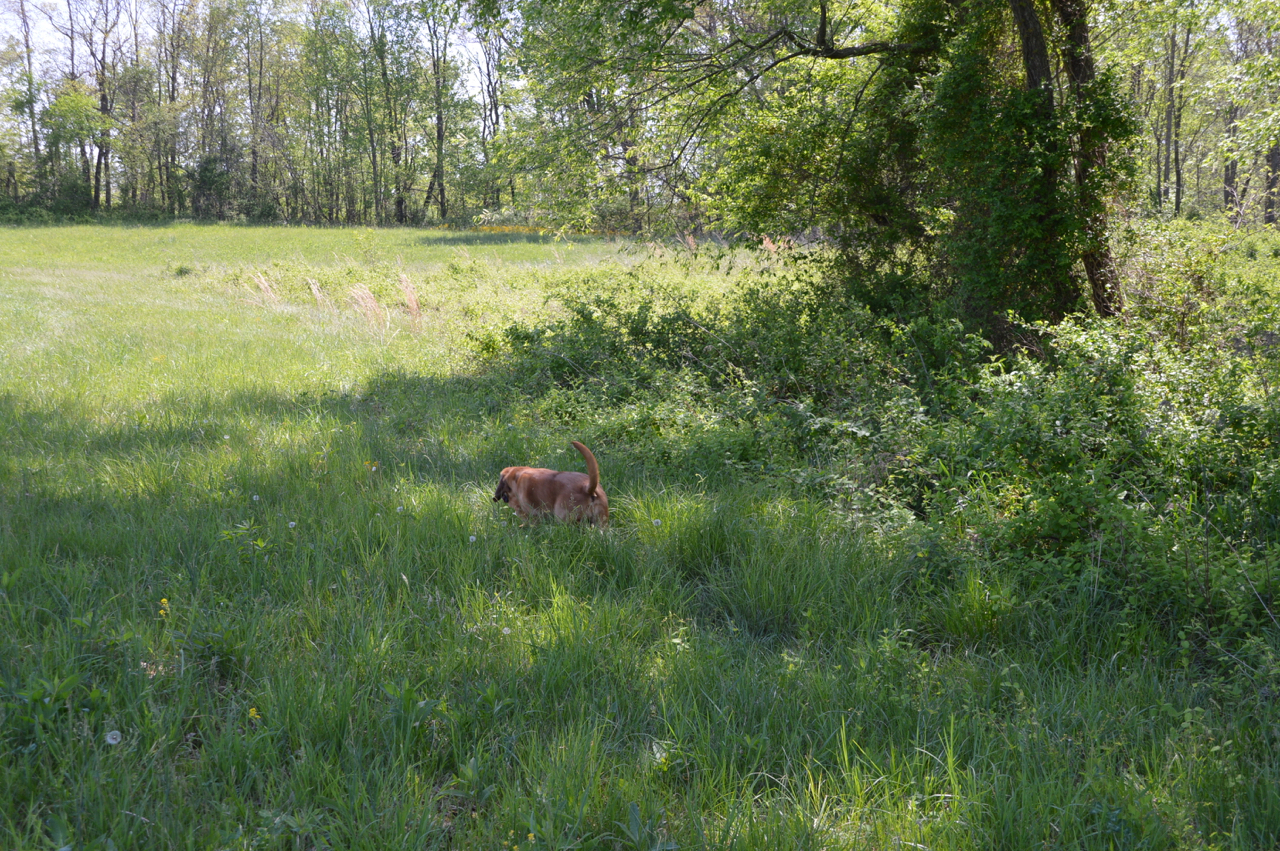 Sadie was sure she must have missed something in her investigation in this same area this morning. She ran directly to that spot and started her search all over again. She was going in figure 8's all over those bushes to the right of her. 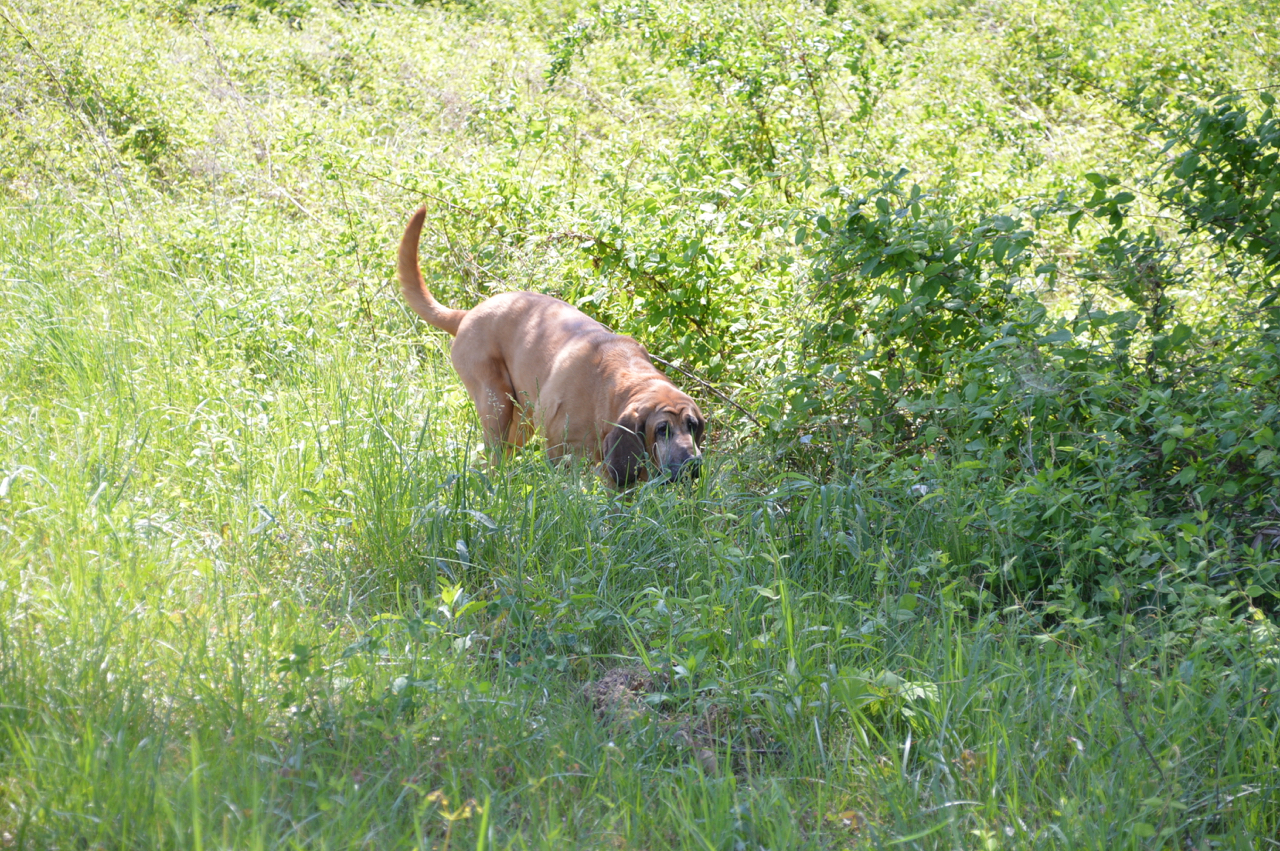 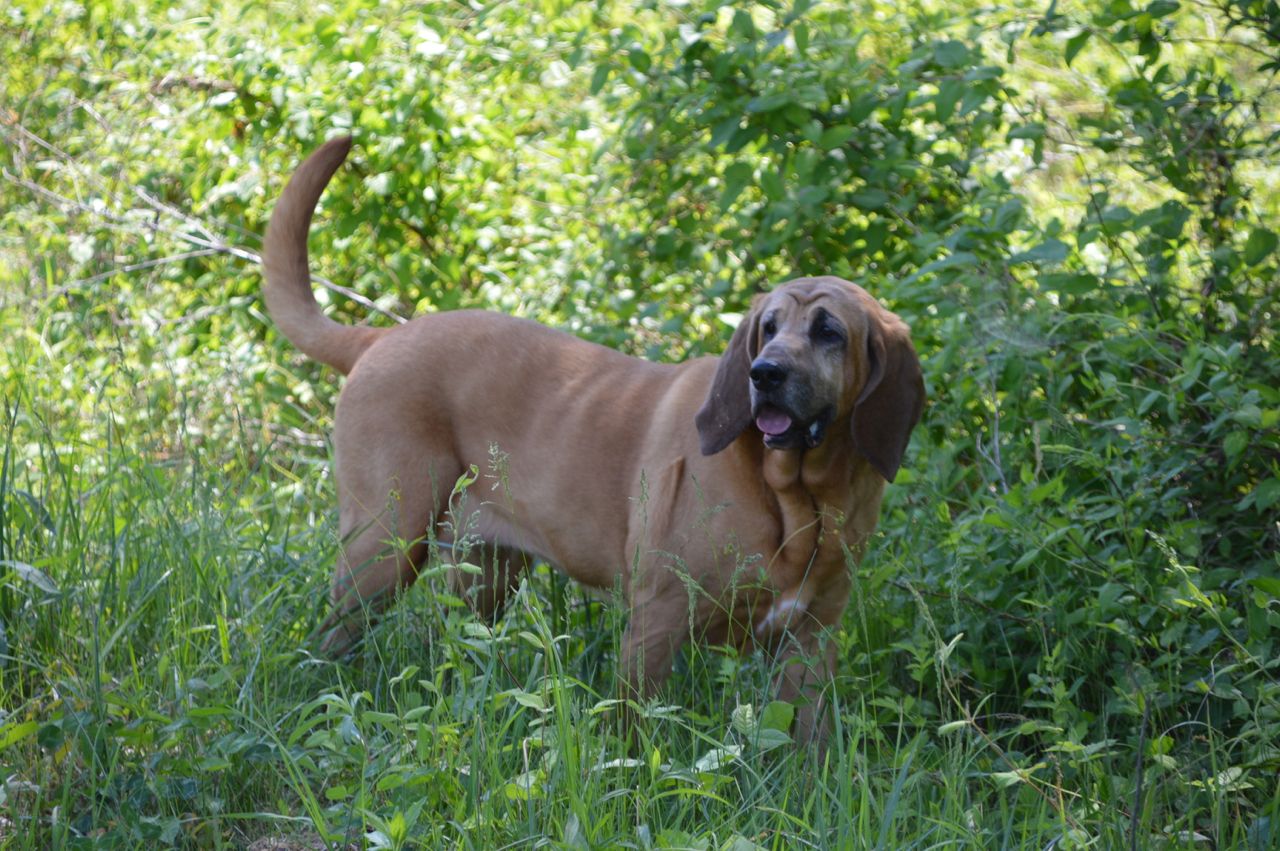 She glanced over at Stella for a little help, but Stella was heading off into the opposite direction, her nose to the ground. 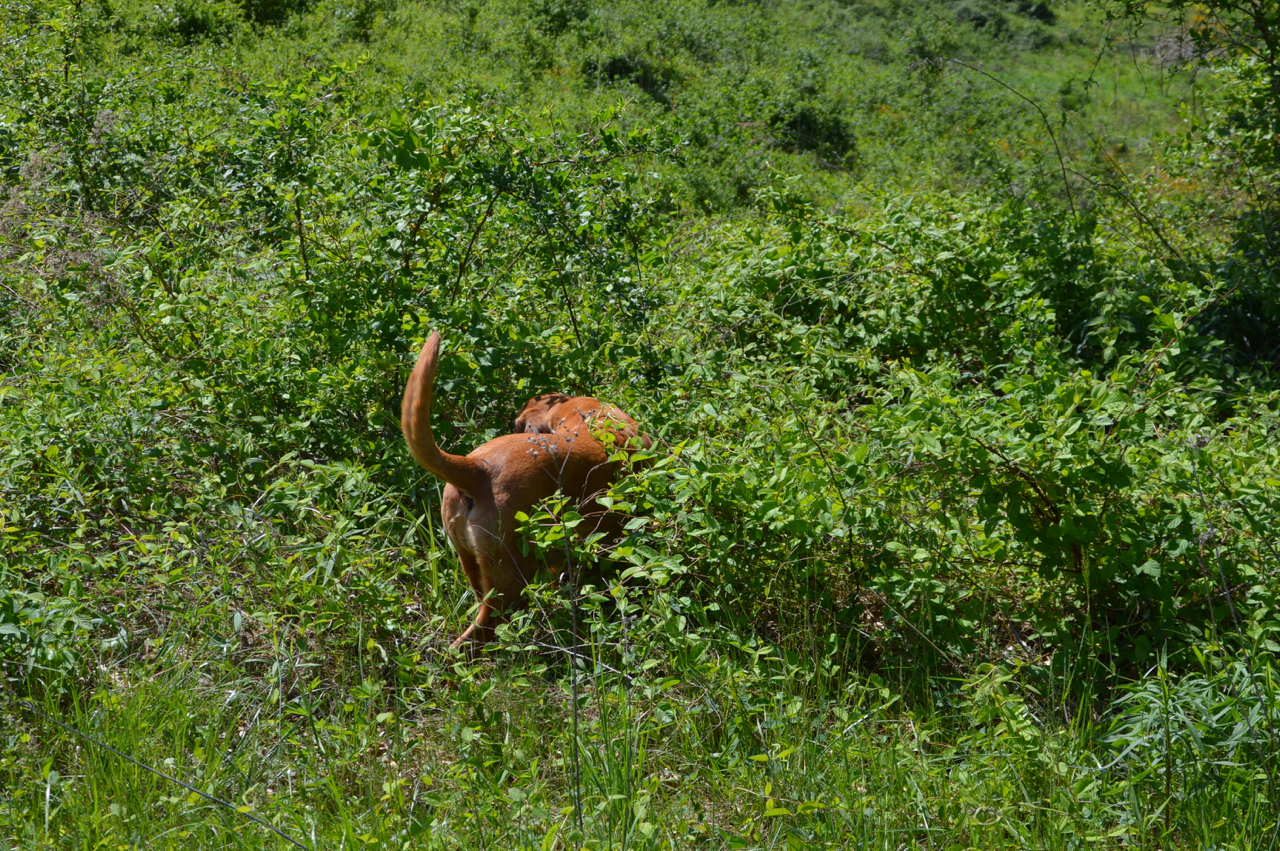 Since I couldn't be in two different directions at once, I chose to go with Sadie and let Stella go where she wanted. Sadie had stopped and glanced in the direction of the gully so I needed to make sure that was not going to happen. 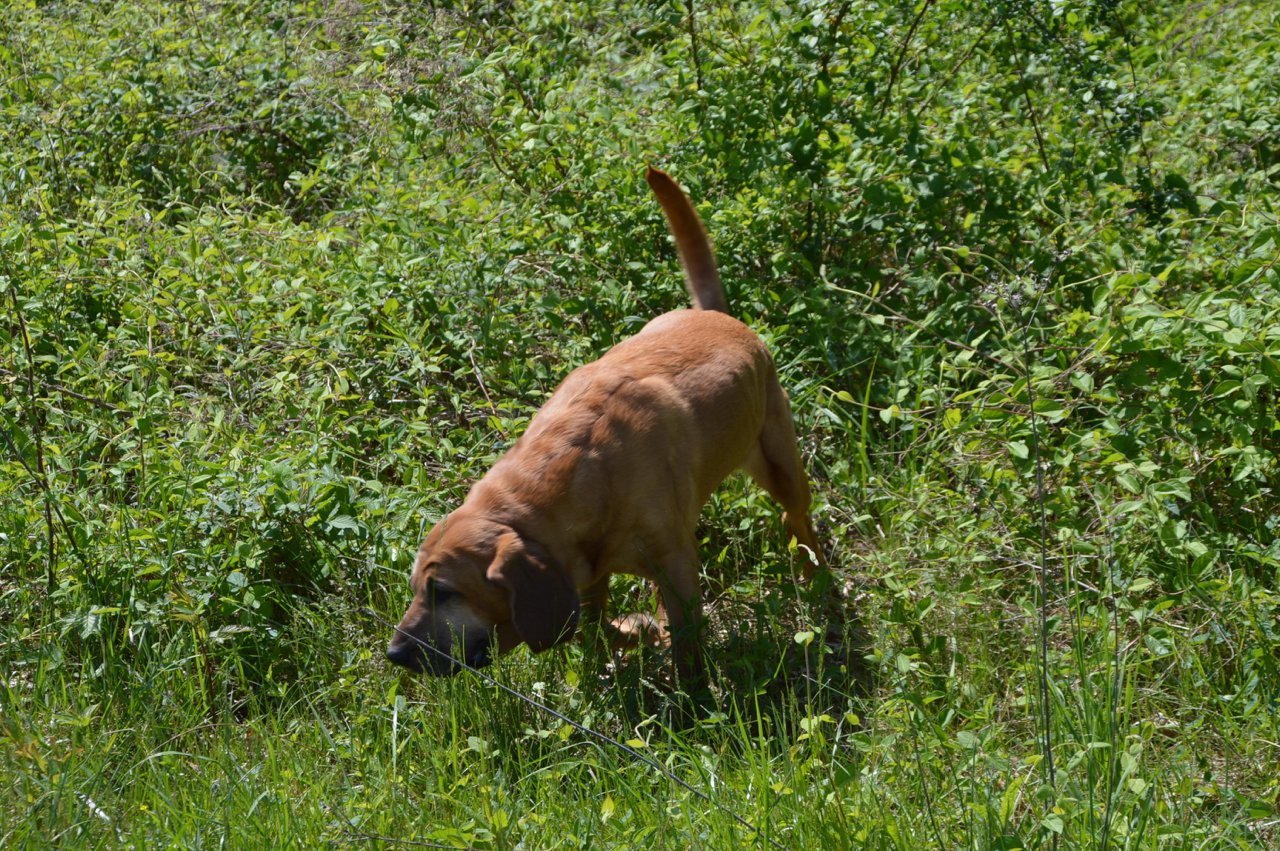 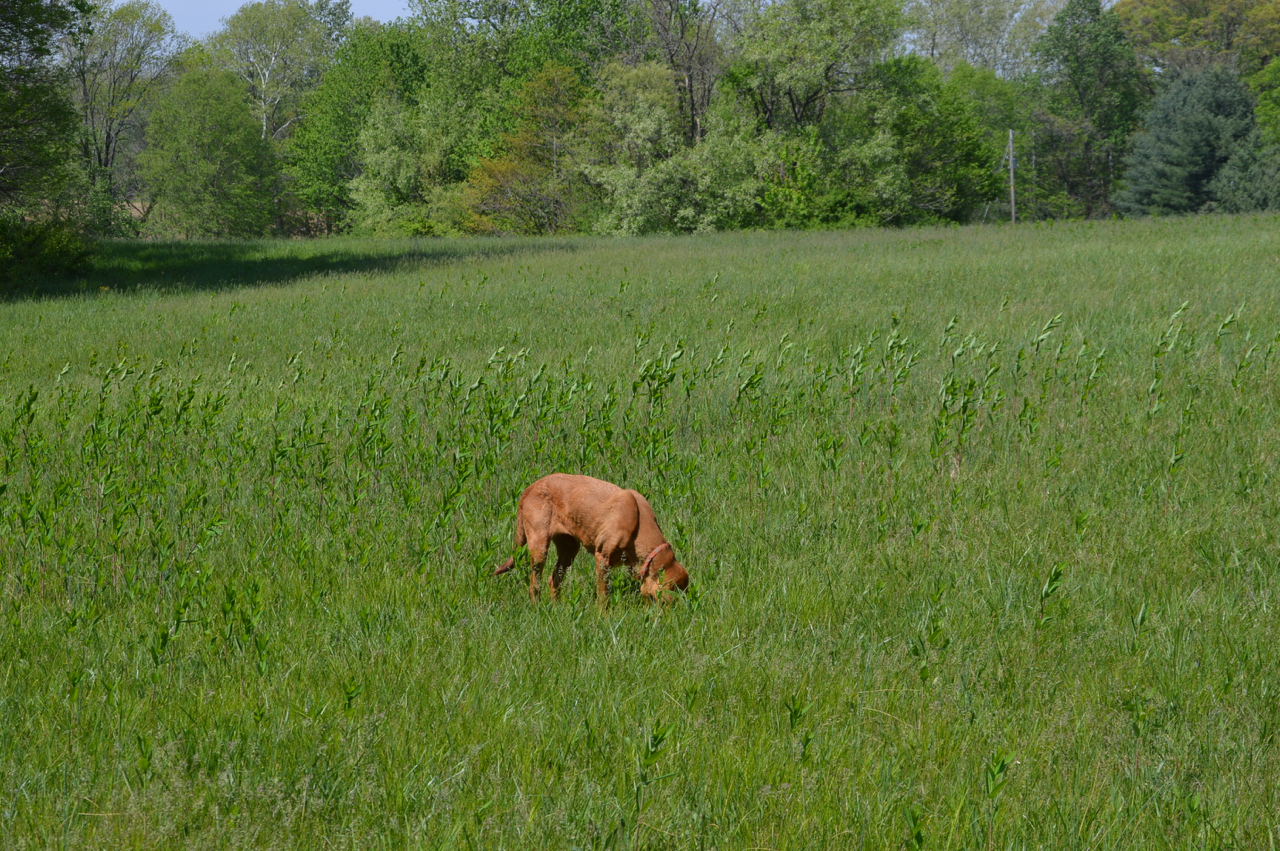 Stella didn't get far. It is another one of the stops she does not miss. The times I have walked over to see what is so good to her, I don't see anything but some mashed wet grass ... maybe the deer scat is gone by the time I check. 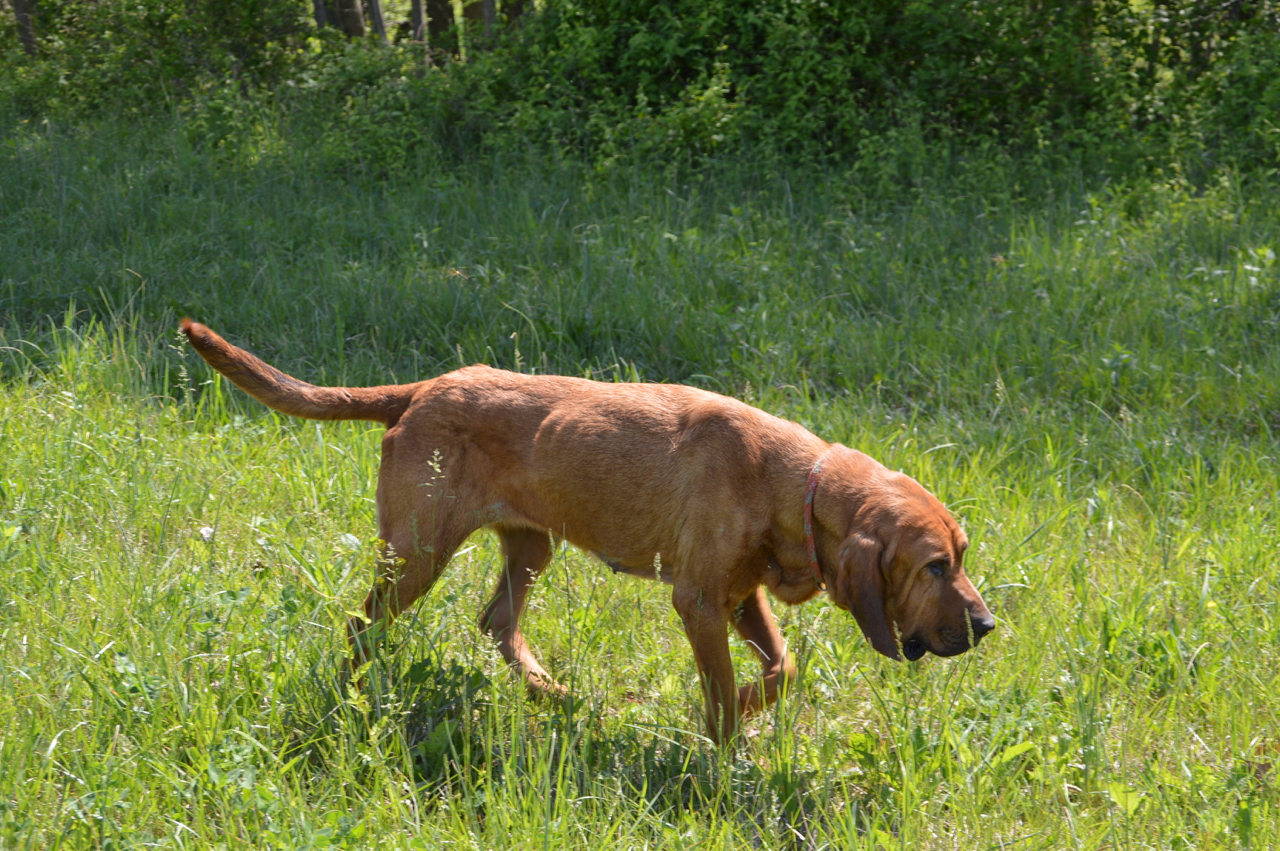 By this point on the walk I thought the hounds would probably sleep the rest of the afternoon. It was hot and both of them were dragging now on the walk. Sadie was already panting before we got back and Stella put it in first gear to finish the walk. I was beginning to think she might not make it back to the house until after dark. 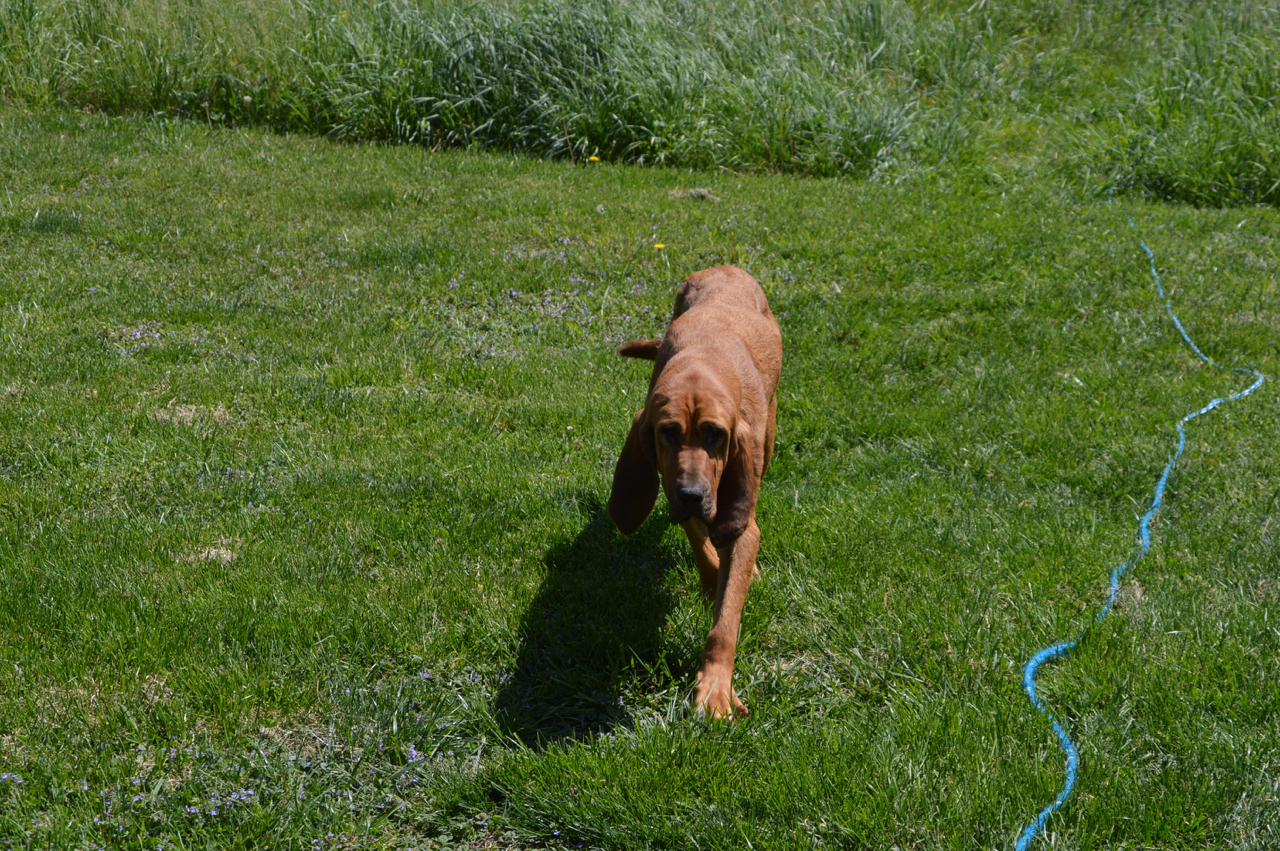 No matter what ... Stella will always go at her speed. 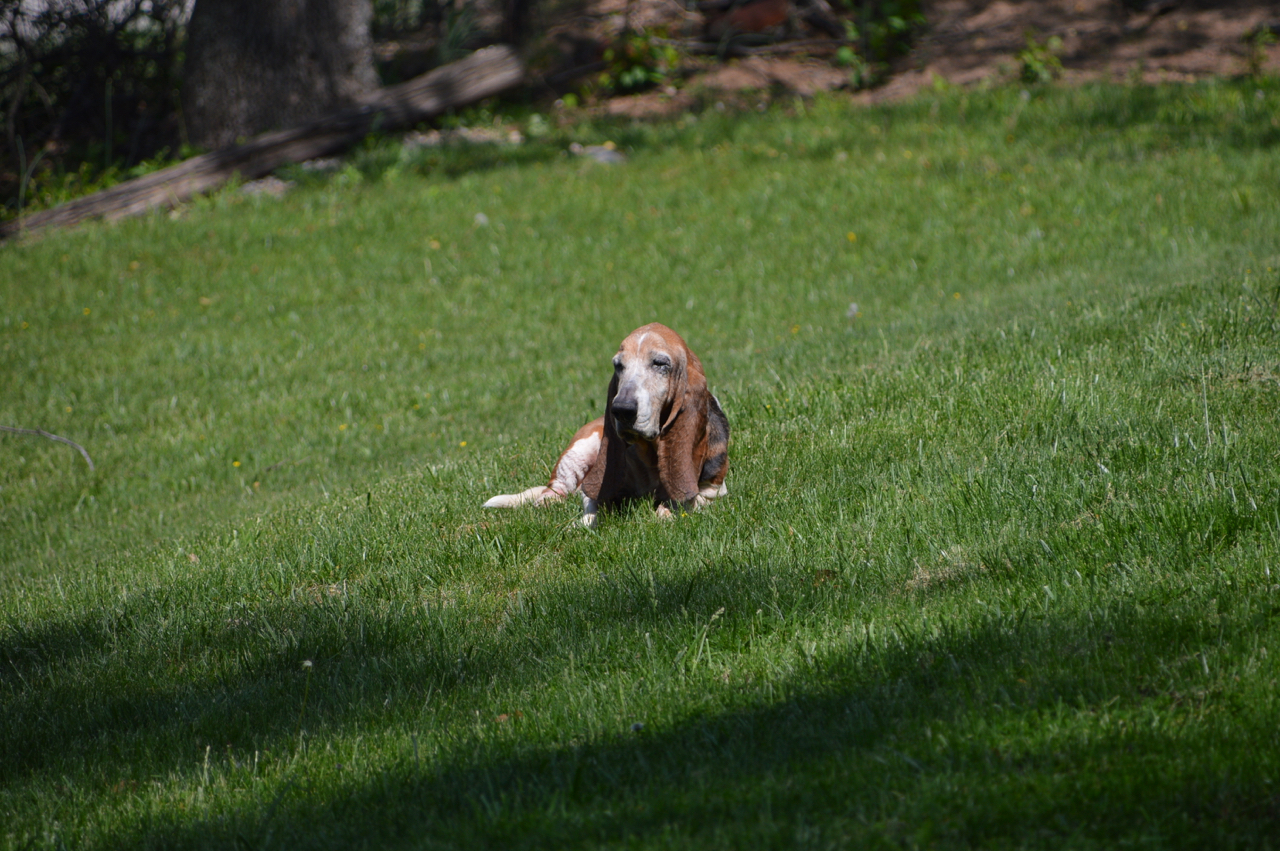 After being on the walk for almost 30 minutes, I stepped out front to see if Heidi was there. The only thing she had moved were her eyelids, which were almost closed when I snapped the shutter.

The bloodhounds and I went back inside. They wanted water and I wanted some ice tea. Heidi stayed out front in that one spot for almost an hour. By the time I finished folding clothes, she had moved to the backyard and sat in the sun for another 30 minutes. 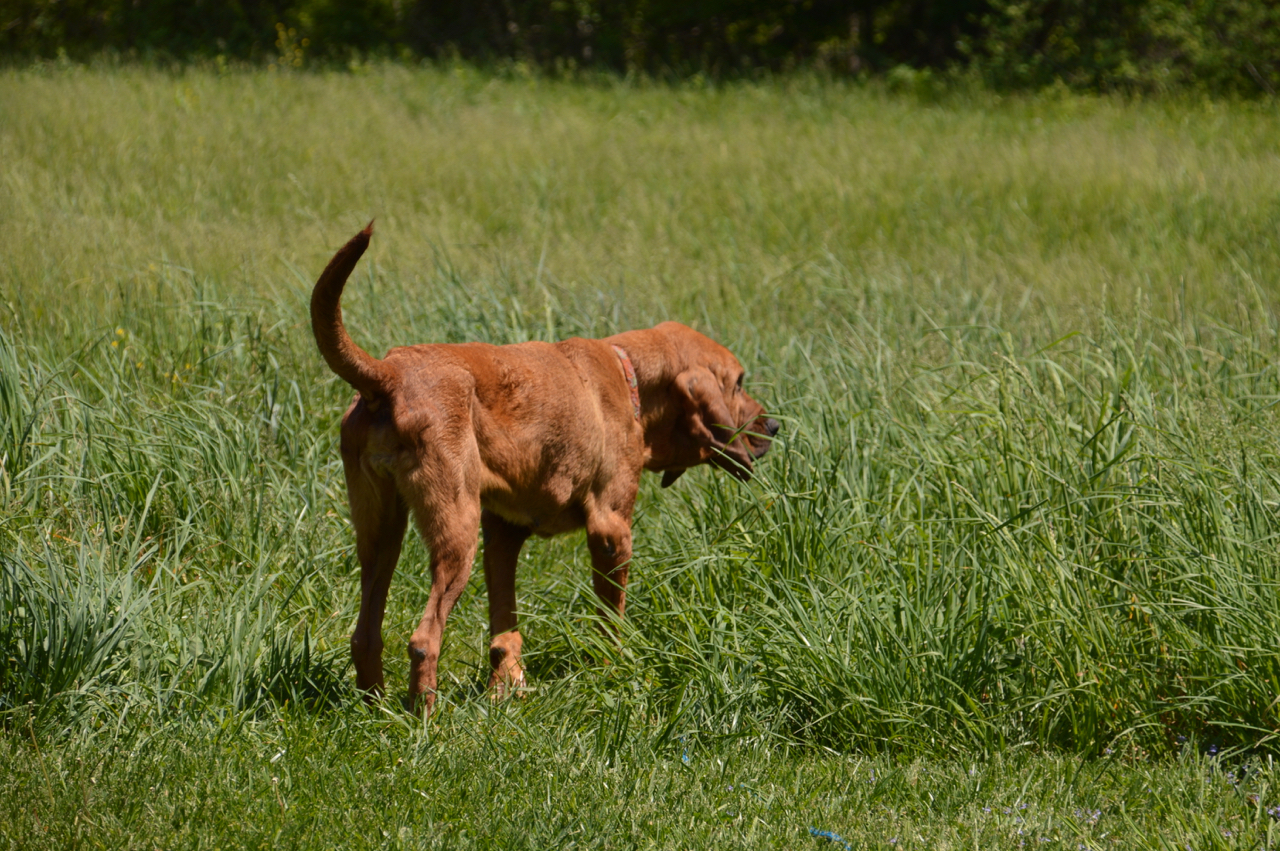 With everything finished inside it was time to go outside and enjoy the hot sunshine. Sadie was back to investigating the whole backyard inch by inch while Stella headed way out into the field. 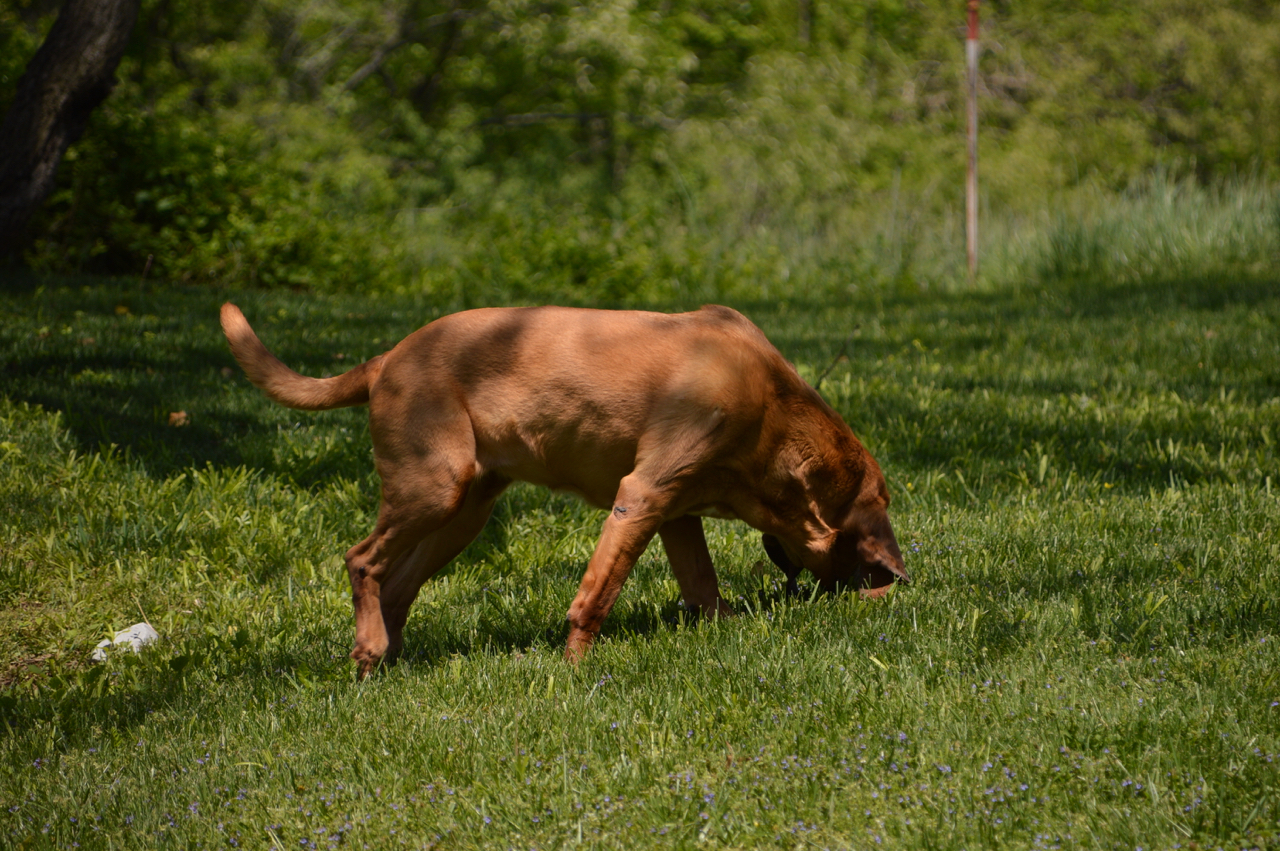 Sadie rarely lays down in the backyard and won't just sit in one place. With her DNA, she cannot sit still outside and is almost in constant motion. She was only walked less than an hour before this but ran to go back outside. 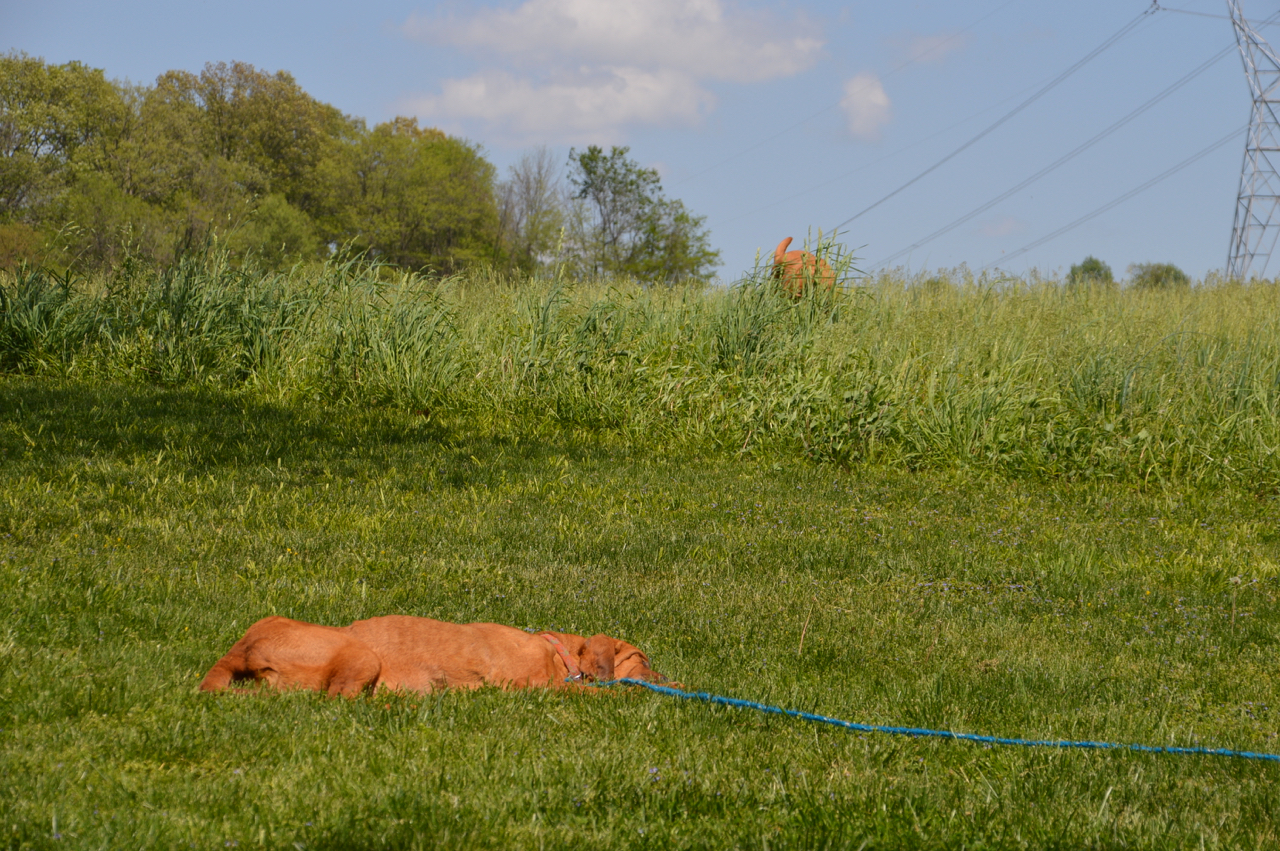 I put the book I was reading in my chair and walked out into the field to bring Stella back. If she was going to roam I needed to put her on the tether today. It wasn't a minute after I returned to my chair that she walked into the yard, found her sleeping spot and took a short nap, tether and all.

The thing is ... If I were to take the tether off of her while she slept, she would wake up and then wander out to the field again. 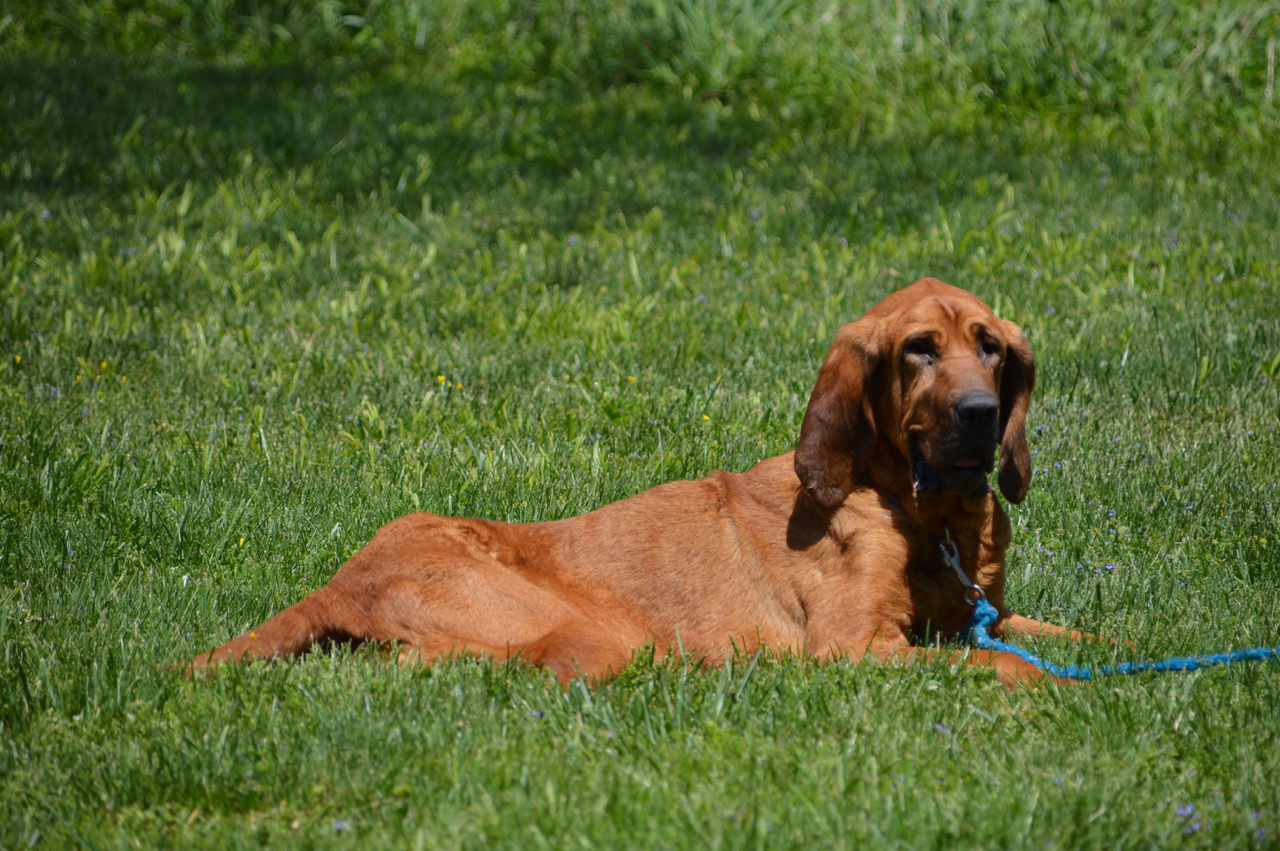 It wasn't 15 minutes later that Stella decided it was too hot to sleep outside. I could see her panting and I knew a long string of drool would not be far behind. I also decided the gnats had won another war but Sadie wasn't concerned about the heat nor the gnats.

The urge hit for a Z4 drive. The hounds must have heard the keys when I walked in because Heidi ran for the couch and both bloodhounds headed for the dog bed in the corner of the bedroom ... they were more than anxious to sleep in cooler conditions. 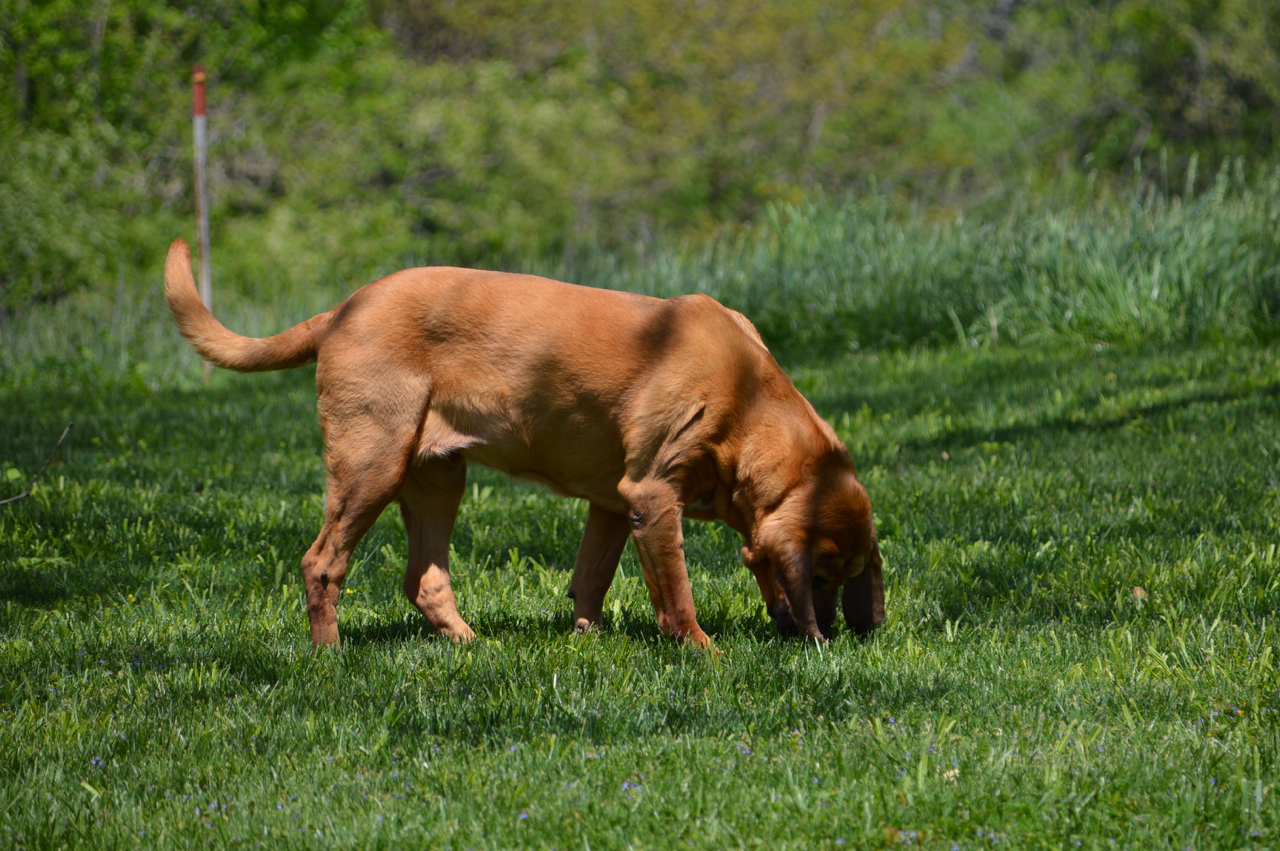 After my 42 mile loop where I didn't go faster than 60mph longer than a minute, the sky was filling up with gray clouds from the west. Just like they said it would happen last night on the local tv weather. I did not have all the yard to mow but half of the backyard was tall enough to mow and if I waited the next three days for the rain to stop I would not be mowing the yard but baling the yard like hay.

So, a pretty productive day today considering it's been a week or more of procrastination. Next on the hit list will be giving Heidi a bath and trimming nails of all the hounds. That might take place in the morning but I'm pretty flexible when it comes to changing plans.

Looking at the weather radar it looks like the storms will be here later tonight.

I can't believe the week is half over here in 'the tropics' of southern Indiana.
at April 26, 2017