Sadie Fits In A Walk Between Storms Once Sadie saw sunshine outside she thought she had a chance but we needed to go outside and take a few steps into the field just to see how wet the ground was. It looked and felt dry enough, although wet, that we could get a walk in today. 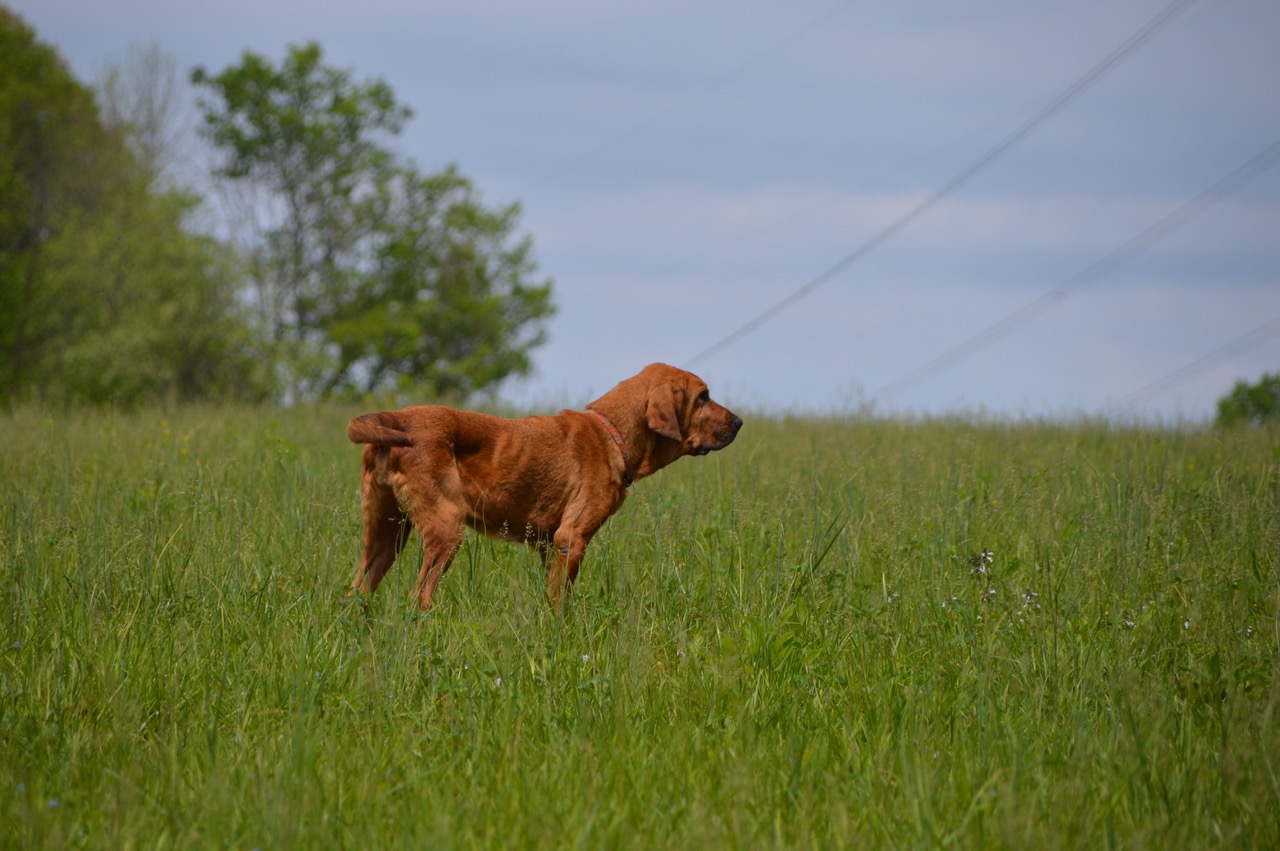 By the time I walked inside to grab the camera and came back outside, Stella was already starting the walk and was out in the middle of the field before the first turn, ready to go. 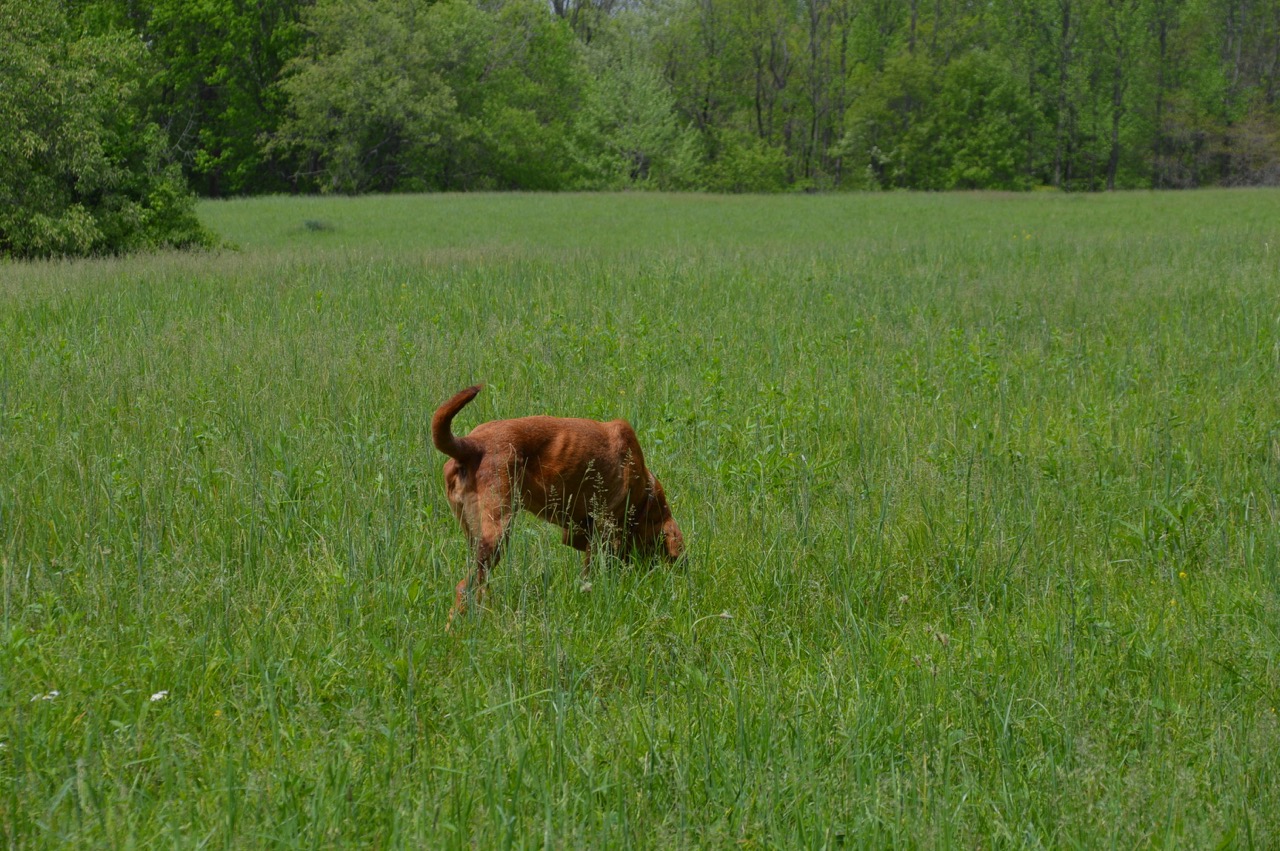 It was an afternoon of exploration. No trotting, no running and no jogging from either hound, including me. I have felt the field being wetter in the early morning dew last week than it was now. Hard to believe it had rained the the last 20 hours off and on. Yet it is nice and hot this afternoon. 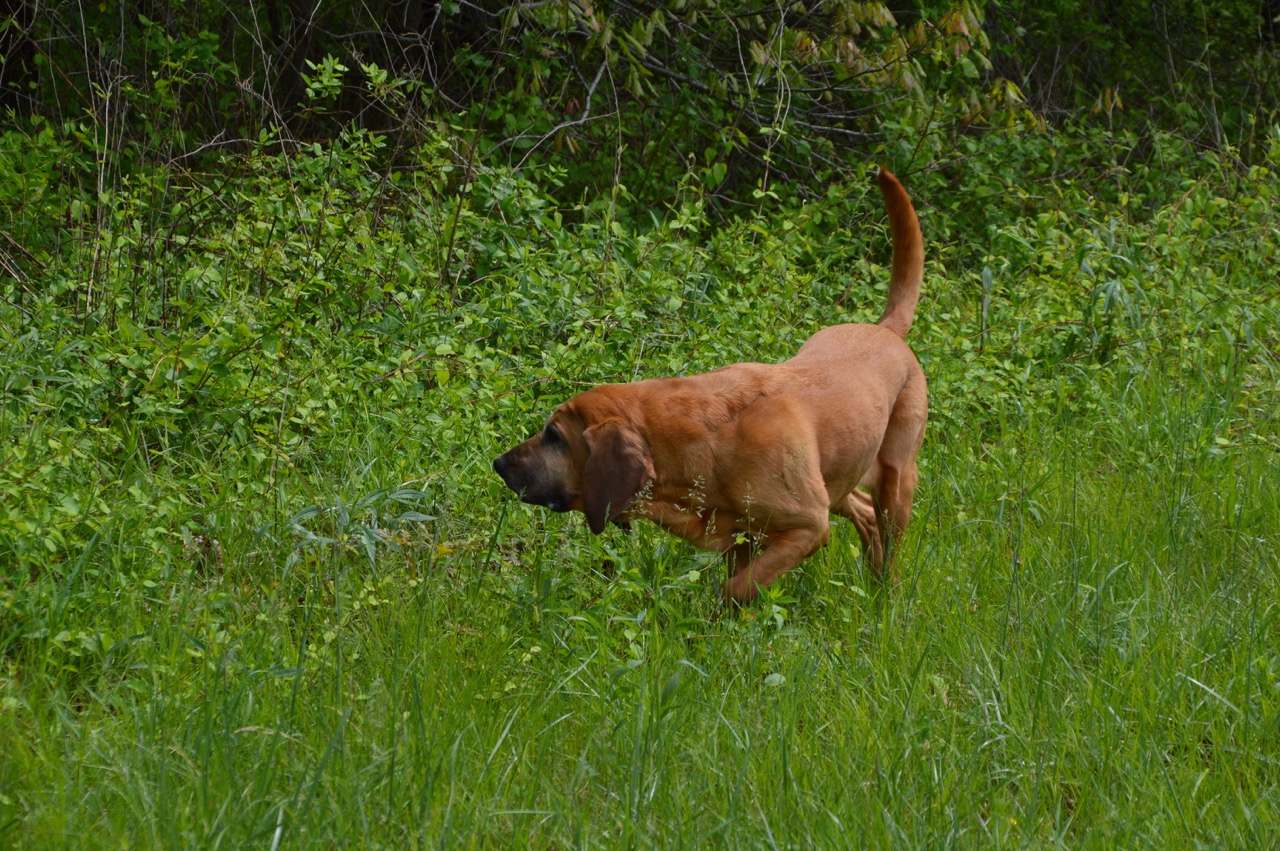 Sadie was thrilled we were outside. It doesn't take much for her to get cabin fever when she cannot get outside a hundred different times a day. At least it seems that many from my doorman experience. 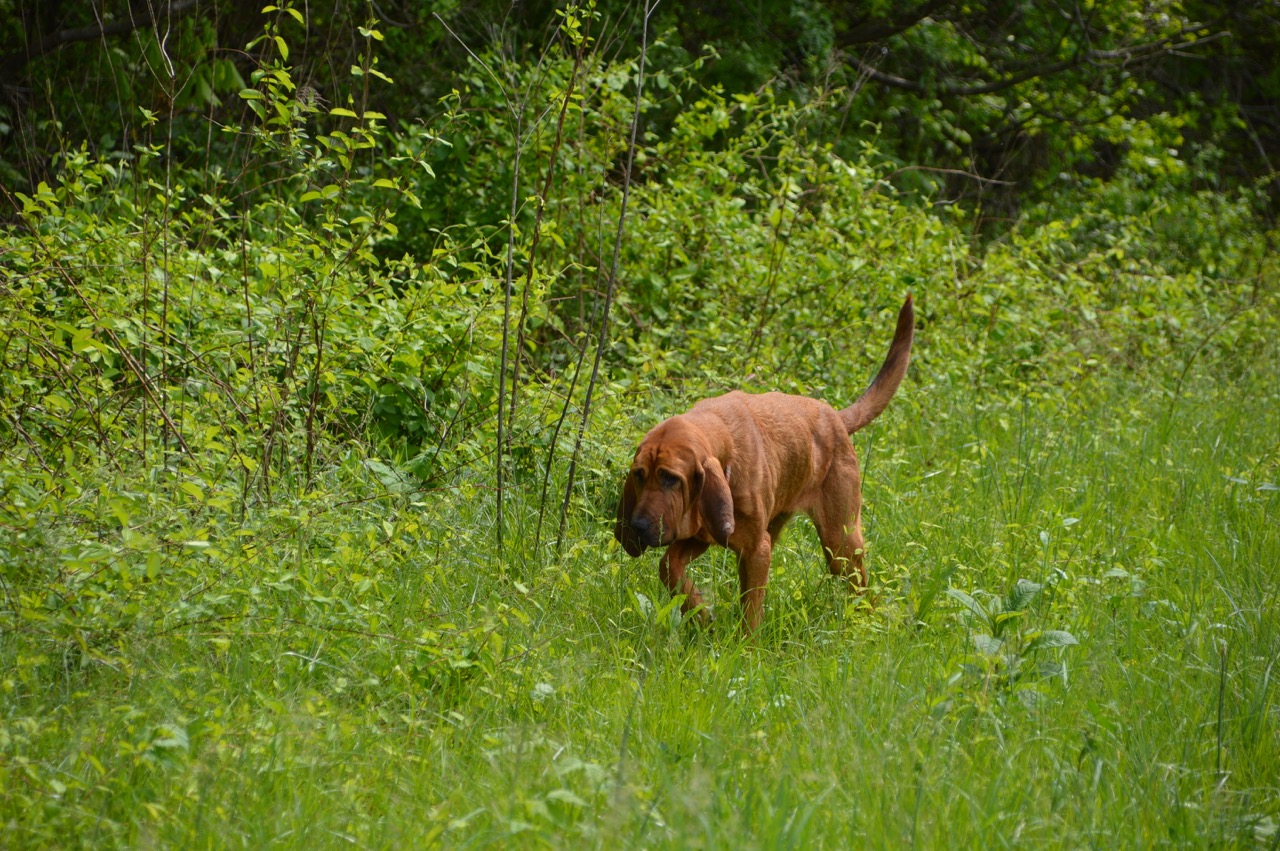 Stella's ischium is back to being the same size as her right one. I have to think that swelling over the weekend through Wednesday, had to be rabies shot related. She enjoyed her back rub with the rubber hound mitt that collected a small amount of shedding hair. 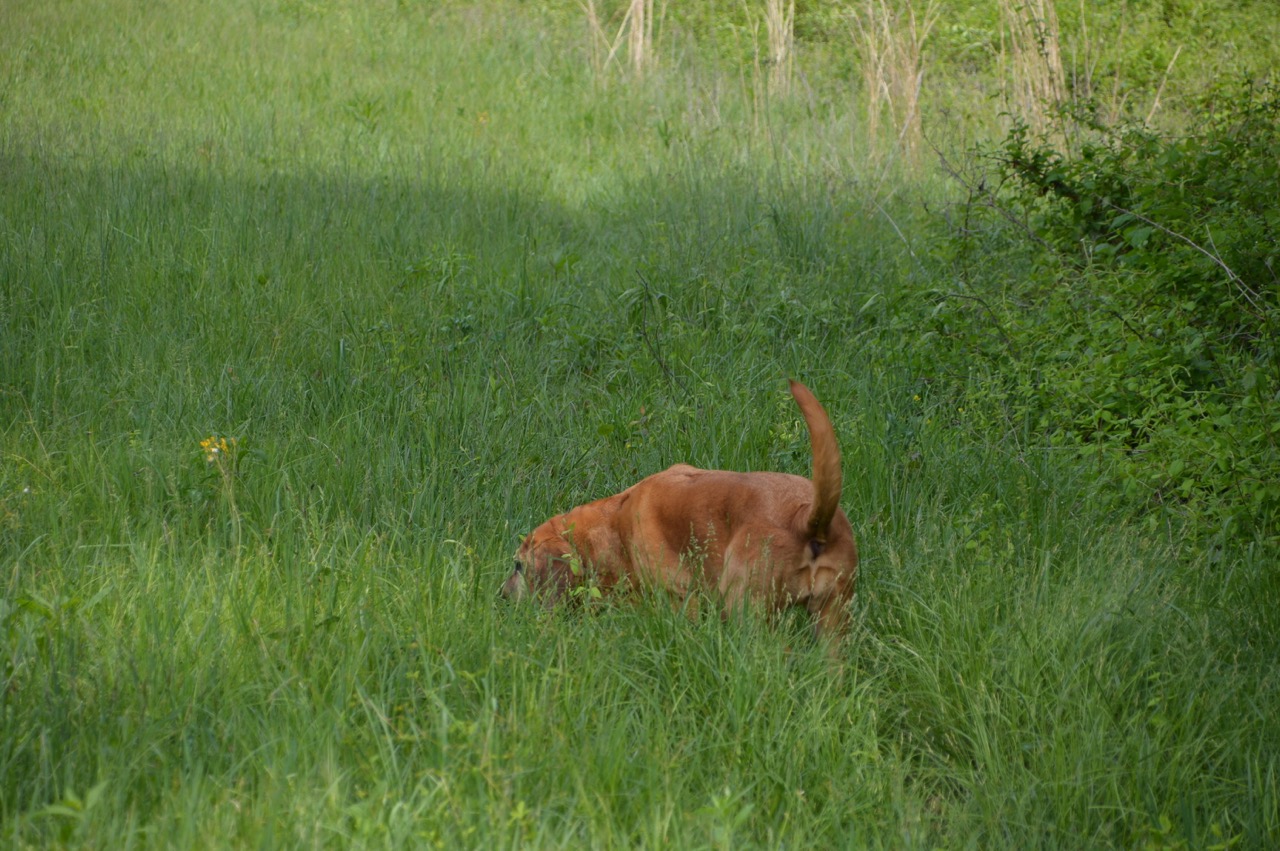 Not nearly all but along the edges of the field where the hounds walk, the grass seems to be getting taller by the hour. It will not be long before I'll have hard time seeing the hounds while they walk with their noses to the ground. 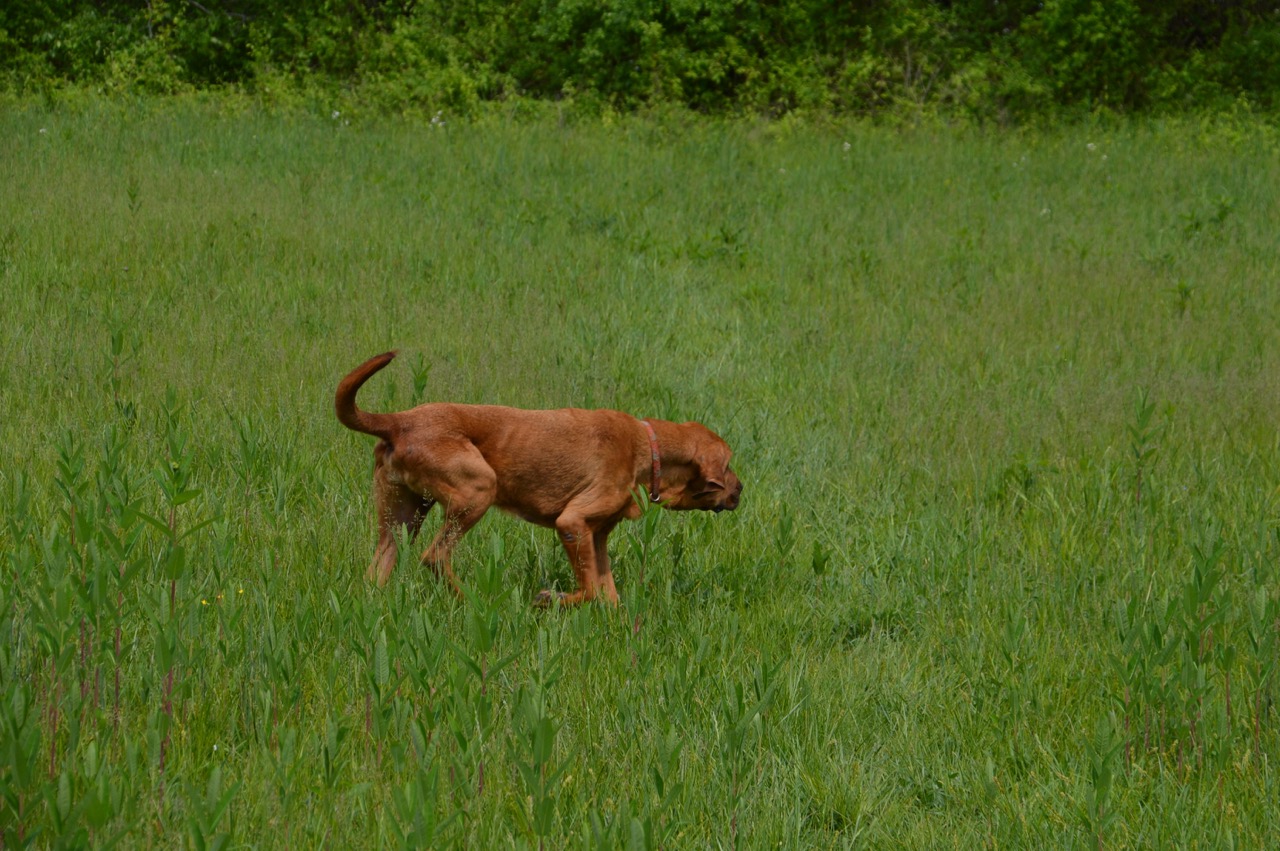 After hanging out left of us for most of the walk I was a little surprised that Stella slowly walked in Sadie's direction near the far right corner. I didn't have to call her by name thing but later on she turned on her stubborn feature and made the walk a little longer than planned. 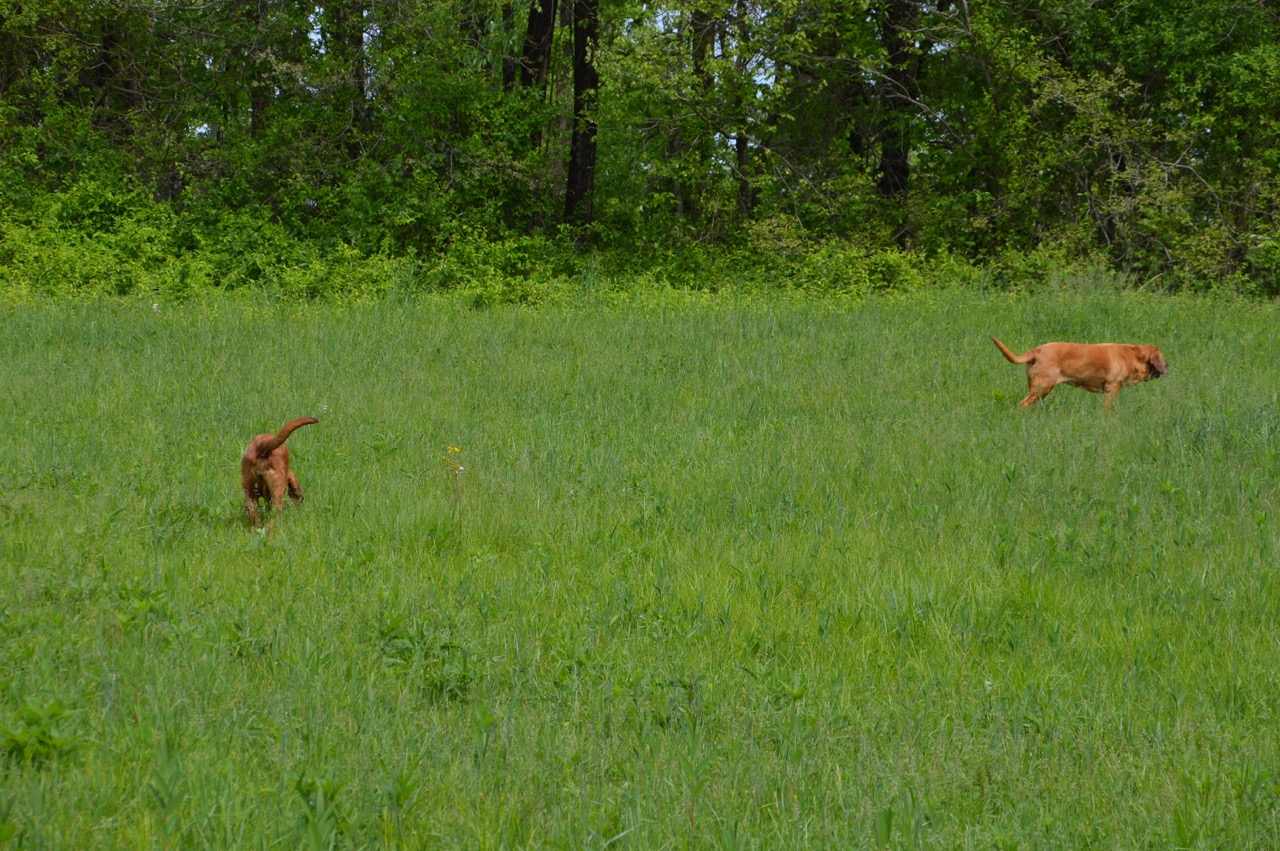 Even with distance between them, still no trotting today by Stella. 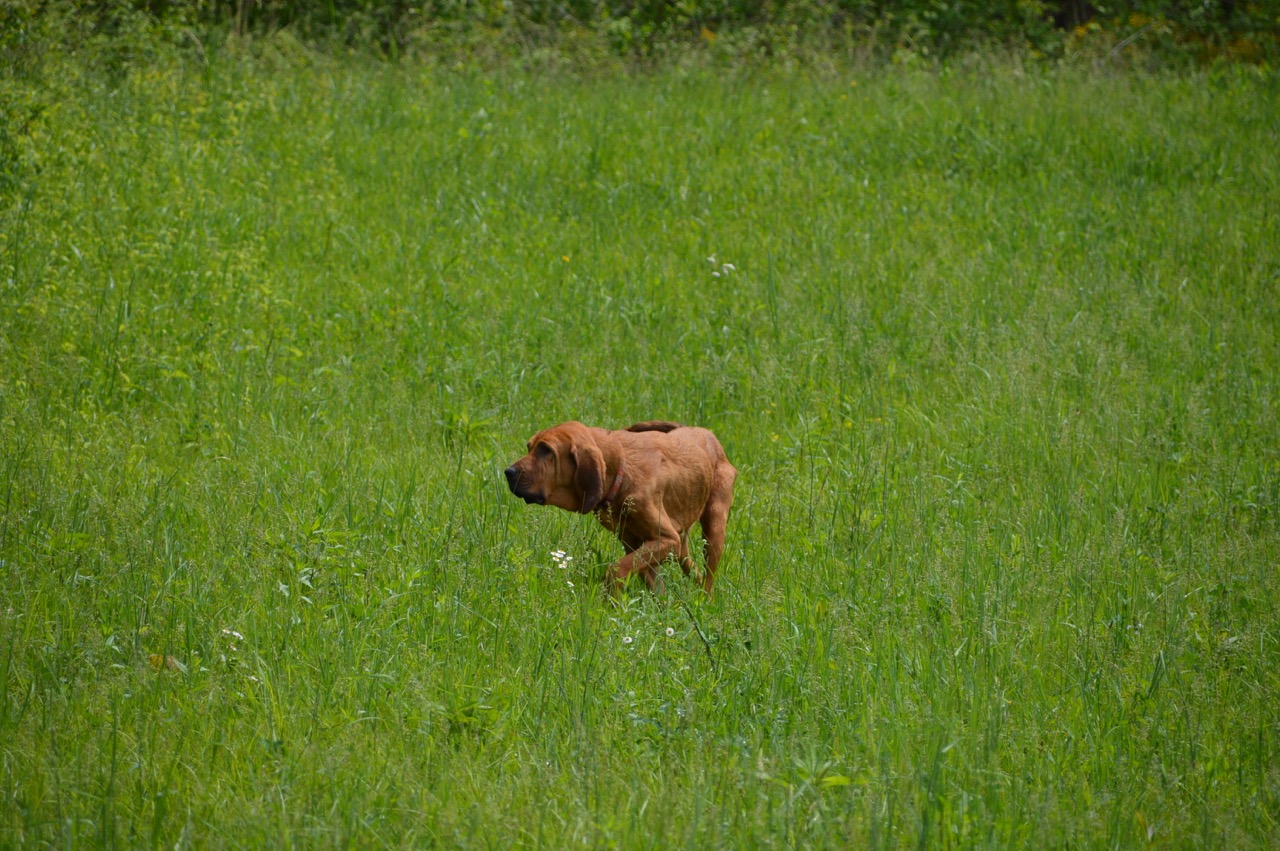 She followed the edge of the field behind me and Sadie all the way up to the last turn. We had to wait on her to catch up, as she was in the ultra slow pace this afternoon. Maybe too soon after her afternoon nap. 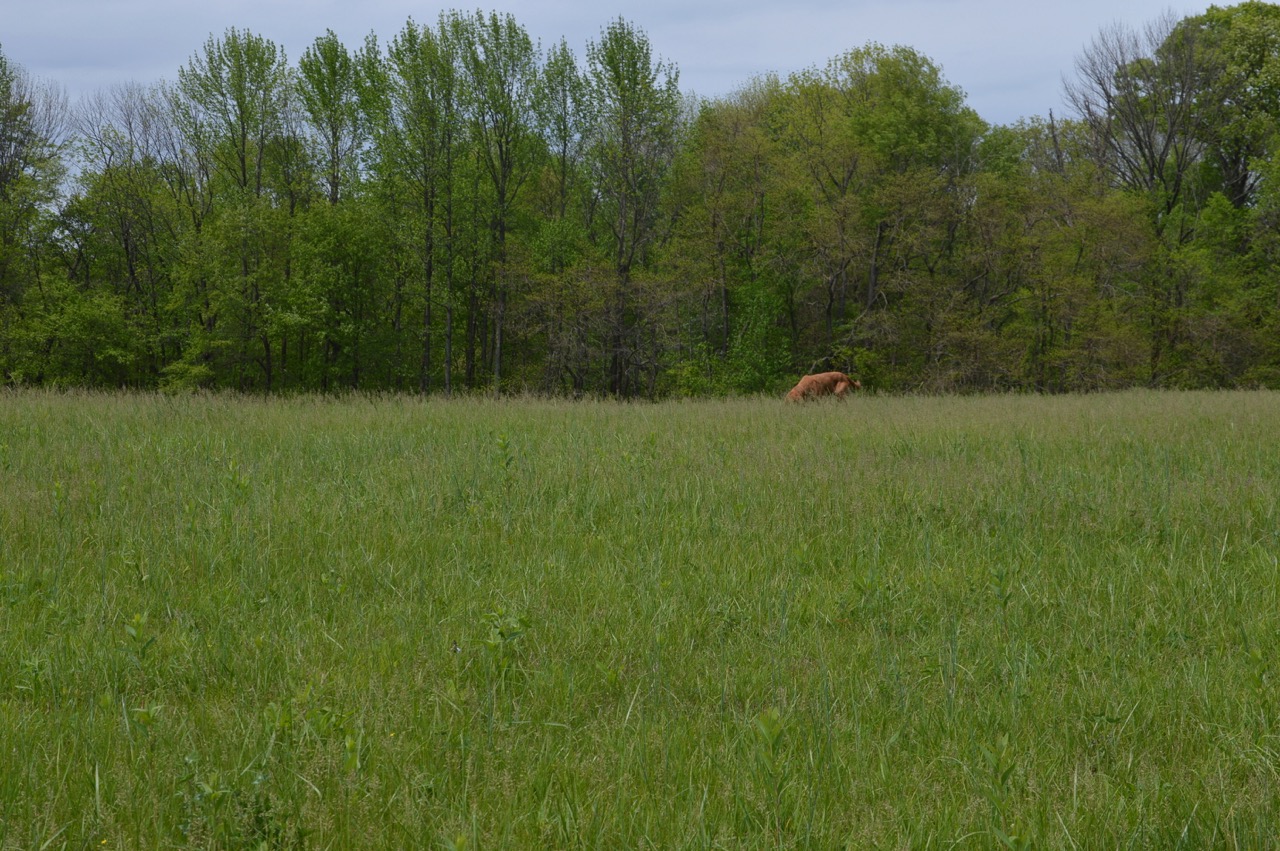 I had walked quite a while not really paying attention to where she was. With Sadie right next to me I just figured that Stella was slowly walking behind me. When I turned to check on her, she was nowhere near behind me !!!! She was barely visible just on top of the small ridge of the field toward the north woods. It took my 200mm zoom lens just to look this close to her. 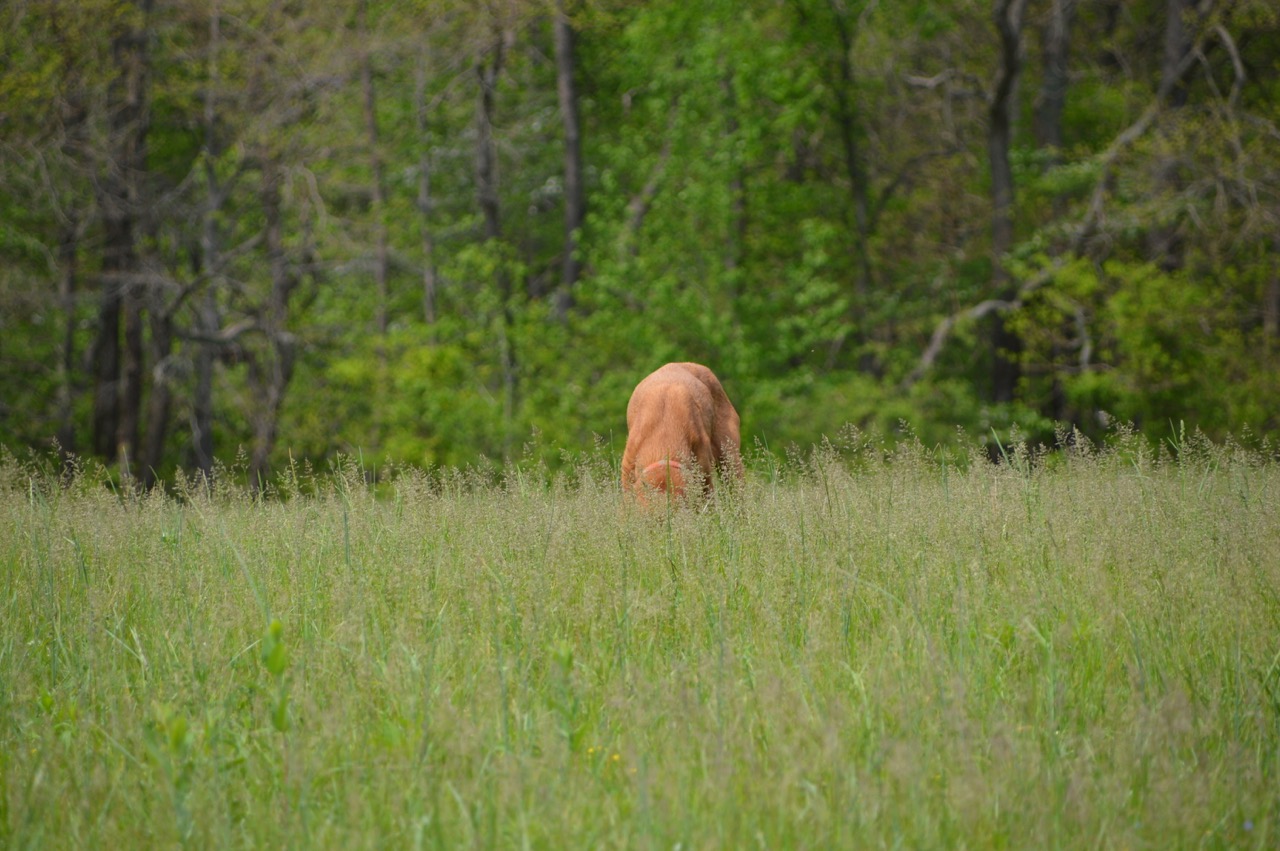 I called a few times and she never moved. I took this from a long ways away so I had no choice but to start walking her direction. She still did not move as I approached her. Then once I was about 10' from her, she raised her head and slowly walked toward me with not a care in the world. 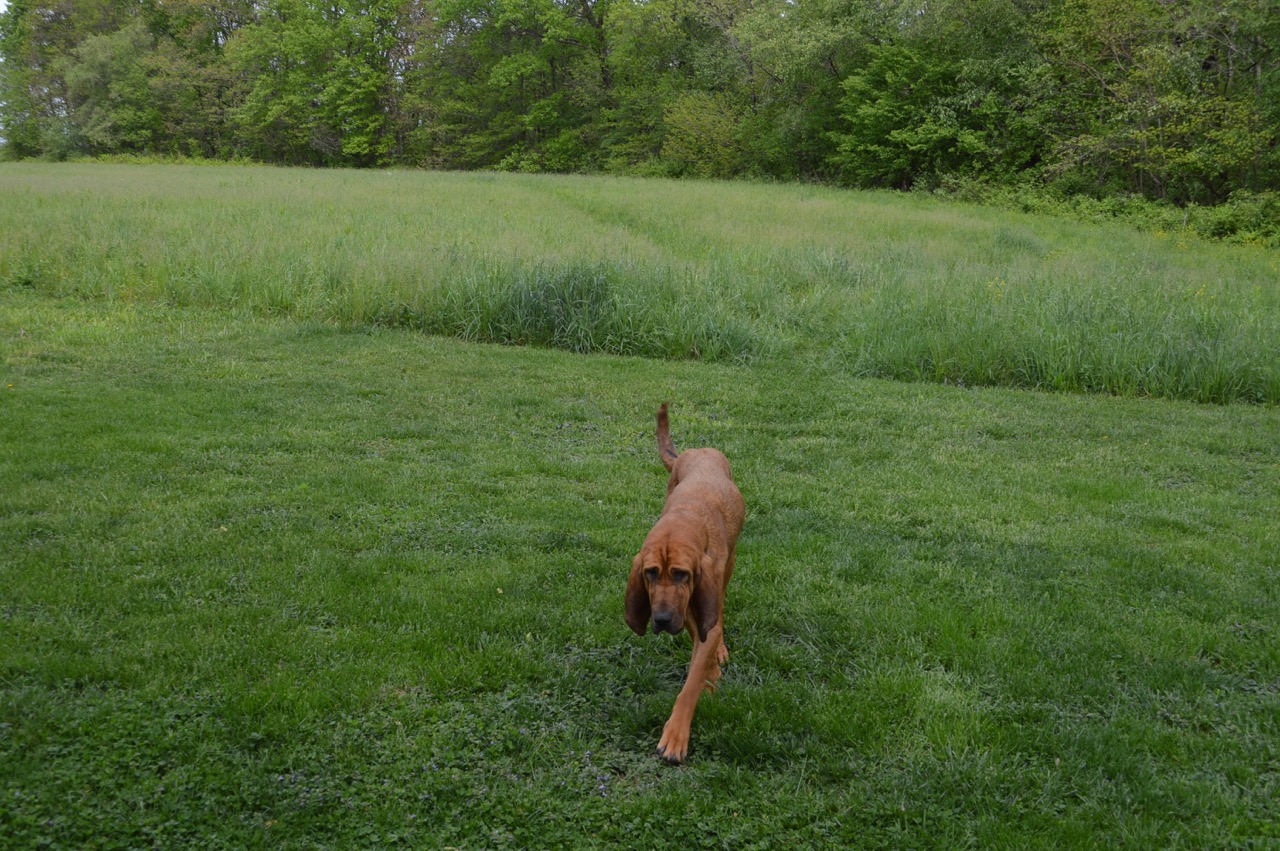 So an unexpected walk was fit in the schedule today thanks to the actual weather compared to the forecasted weather last night. I have a feeling though that Sadie will still want another one later. We might do one without the camera but will have to see.

I still have the urge for some reason to go to Best Buy. There must be something over their that needs my money but I don't know what that would be besides some printer ink. Walmart is closer but they only have the box of three colors for $14 more than the same box at Best Buy. I don't need all three colors, I am not even close to being low on the other two colors besides cyan.

I do not need any computer stuff, no camera stuff so I can't figure out why I can't get that trip out of my head. The Epson scanner that scans negatives and slides in addition to pictures, does interest me quite a bit but I am not sure I am in the mood to jump right in scanning pictures or slides if it were sitting on my desk.

I guess the best way to sum up this afternoon is like when you are hungry but do know know what you want to eat.

Dr. Jeff's vet show on tv tonight may turned out to be the highlight of the evening here in 'the tropics' of southern Indiana.
at April 29, 2017