What A Weird Monday 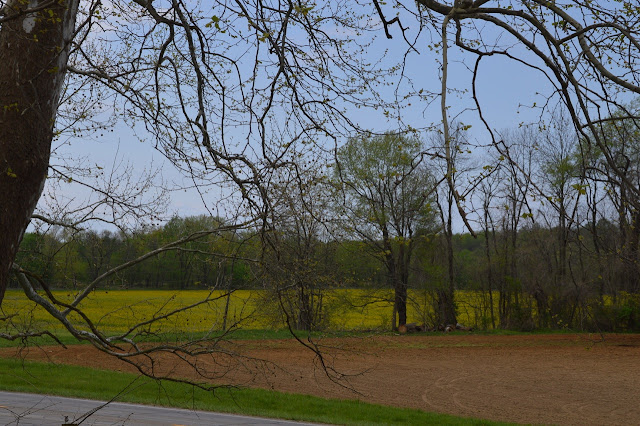 The field of yellow will not be here for long. Those yellow weeds might last a couple of weeks but no longer than a month before they are plowed under and something is planted in their place. Those two fields have different owners, and different plans.


I had a pretty good idea just how strange my Monday was going to be when I went to bed before 11pm, or was it before 10:30pm? After a night full of the most bizarre dreams I finally conceited defeat and was up brewing two cups of coffee by 5:15am ... yes AM. 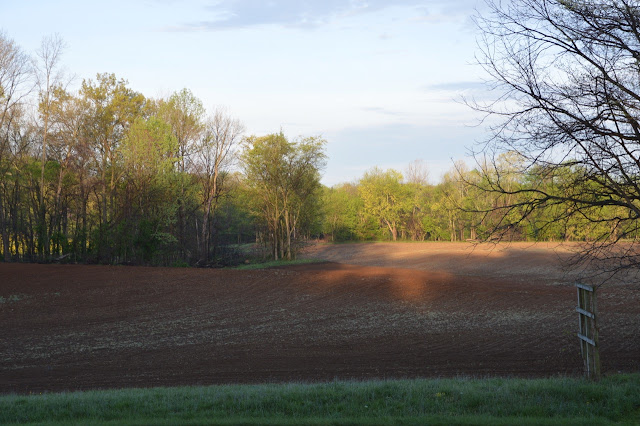 There isn't a lot to do that time of morning. I've been a 'night person' my whole life so it may just be my biased opinion that nothing can be done in the dark at 5:30am. Of course with this rude awakening, the hounds were totally confused. They played along though with the normal routine a couple of hours early. They were fine with the idea of getting to eat ... that does not matter what time of day or night it is, they all love to eat. 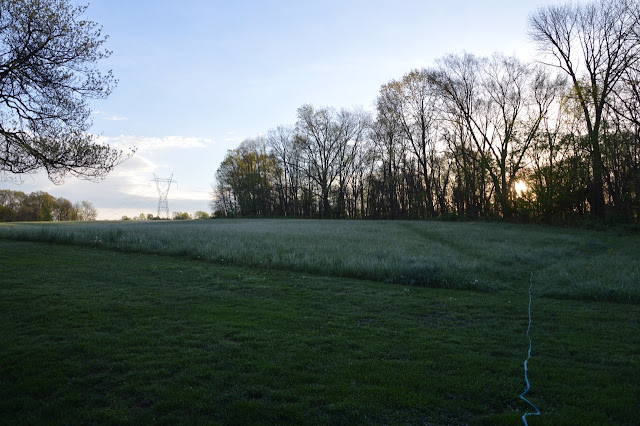 A little after 6:15am the dark skies filled up with the sound of every bird outside. The bird conversations were so loud and distinct, the sounds of people driving by to get to work early to start their week was almost completely subdued.

Still, I can't say I was enjoying being up that time of day no matter how good the coffee tasted. I was sure my Monday was going to be one strange day. With nothing planned that made it equally dangerous, but that is the life of a retiree at times.

April 11th was my 3rd year anniversary for retirement and I still love the freedom that I have. I miss the money the job paid me but I miss nothing else. The freedom of time is worth more than than any amount of money. 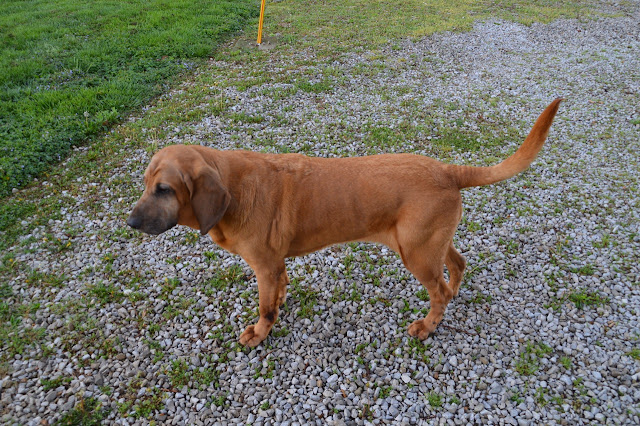 After my two cups of coffee, getting caught up on my online reading and deleting my section of complaining on yesterday's blog post ... I put not only my computer in 'sleep' mode ... but also myself. With a restless night of weirdness traveling through my brain last in the form of dreams, falling back to sleep at 8am was too easy. The hounds all followed the command "go to sleep". 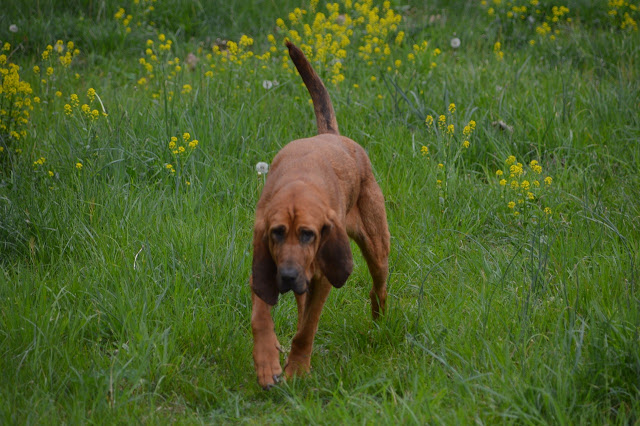 We didn't regain consciousness until 12:45pm. Yes, that is way past the lunch time for the hounds and too late for the majority of the population nationwide ... yet when retired it's not a problem ... you have to remain flexible when nothing is planned for the day.

All of us had lunch and headed out for the first walk of the day. I wanted to make a little extra effort with the camera today by concentrating a little on holding the camera steady, tucking my arms under the camera like a tripod, holding my breathing while gently squeezing the shutter ... all with hopes of a sharp focused picture. 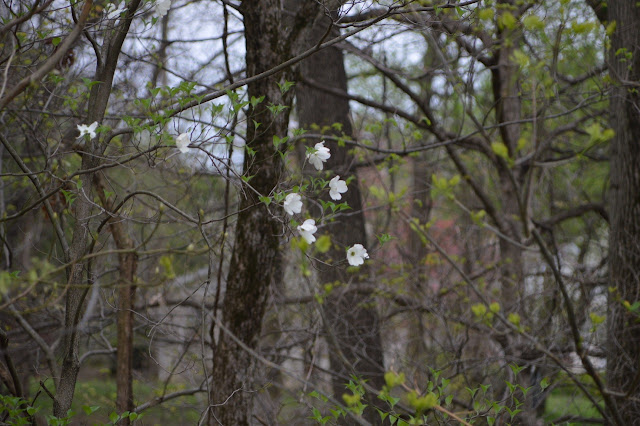 Sadie was thrilled to be out in the field. Stella was still hungry and was looking for natural protein for the first half of the walk. The last half of the walk all she did was drag her paws one slow step at a time all the way back to the house. Sadie did nothing but track scent from start to finish.

Heidi?? Well it's not 70° and was back on the sleeping bag sleeping before I could tie my shoes. 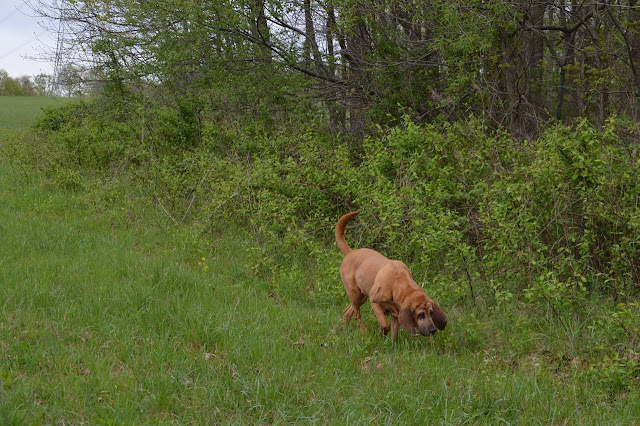 Nothing on the horizon but it seemed to Sadie that deer were near. It would have been past the 'no fly zone' into the woods. I was hoping she wasn't going to take off sprinting from her position of nose in the air. Still she had found something strong enough in the air to peak her interest. 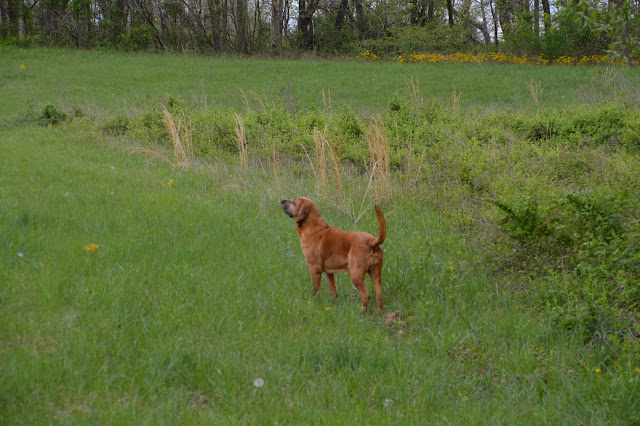 Stella didn't care about scents today. She was back in the spot where the bushes are mashed down and covered by deer scent ... and scat. 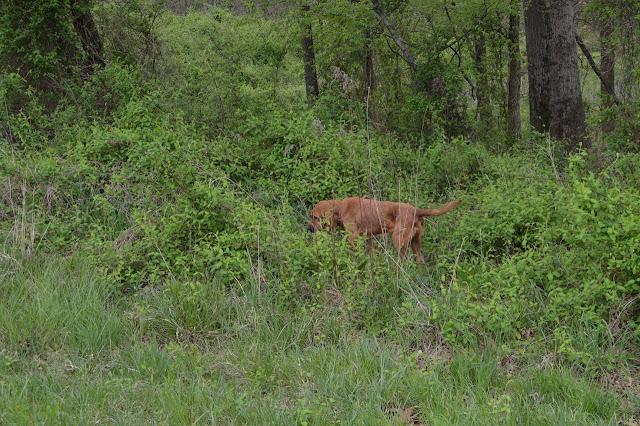 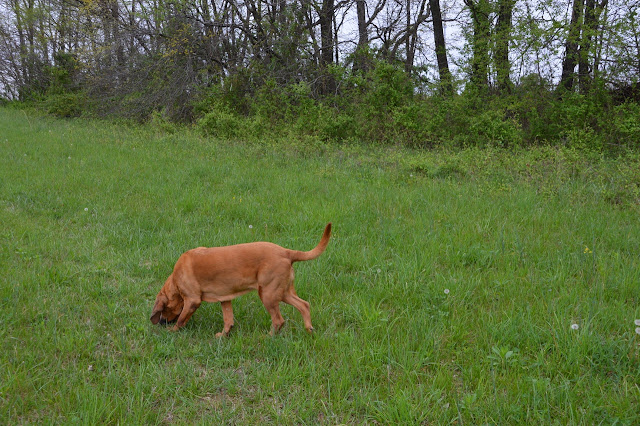 I finally got them herded in the same direction while I tried to decipher what I remembered about those strange dreams. Some of it was familiar from past dreams where the neighborhood is the same and practically every hound that I have ever owned shows up. The problem is they are all running loose. Some are with other dogs, some are in the streets and I cannot get them all collected by the time I wake up wondering what is going on. 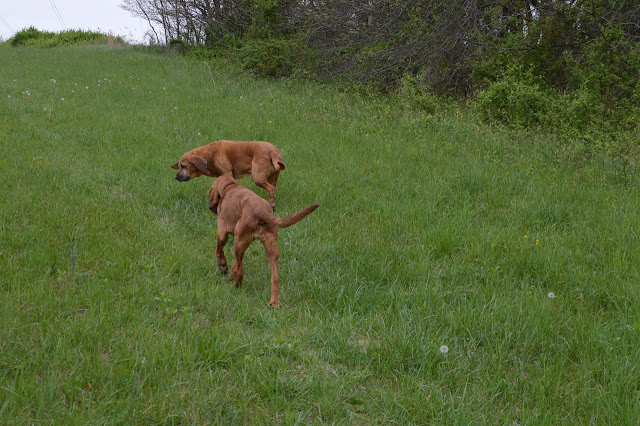 Most will find this next one funny. I do now but didn't at 4am. In the dream I am writing a blog post with no pictures, no paragraphs and no punctuation. The screen I am writing the post on is automatically scrolling non-stop, where I have to type faster to keep up with the screen and keep my sentences together.

About the time all my words become one big blur from typing so fast ... I woke up, again wondering what was going on and happy to see I was still in a dark bedroom and not in front of a computer. 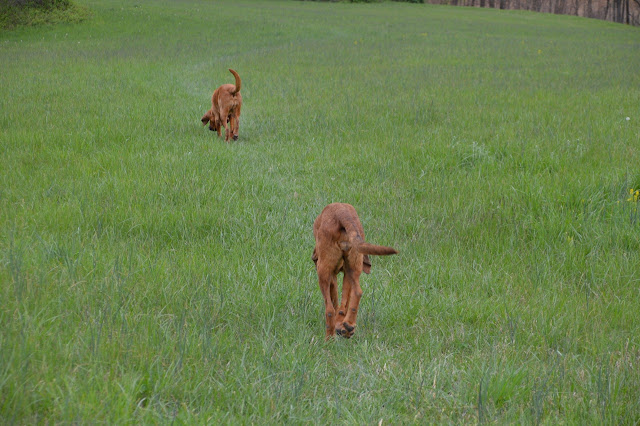 Since I am well rested now for the day, there will be no more siestas for me. The hounds are a different story as all of them are sleeping with Sadie and Stella snoring. A change of schedule never seems to bother them, once again showing just how more flexible dogs are compared to people. 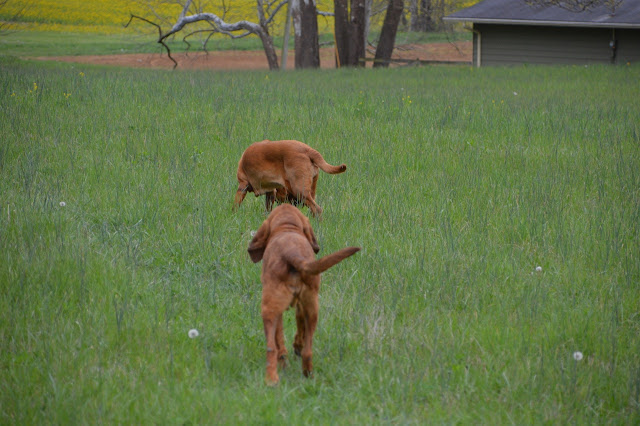 The field of grass is growing fast. Luckily this owner lets the field grow naturally. The previous owner would bring in loaders of turkey fertilizer and spread it over the field every few years. Needless to say during those times, ALL daily walks were cancelled until further notice. My old basset Harry found enjoyment in rolling in it. I tried to keep him confined to the yard as much as possible but his expertise was getting out and away.

The highlight of the afternoon was Sadie trying to block Stella from the water bowl. There is never any growling or barking involved. Sadie will stand or sit near the large bowl of water and will quietly let Stella know she is not to come anywhere near it. That is when I stand between the bowl and Sadie so Stella can get some water. It doesn't happen all of the time. 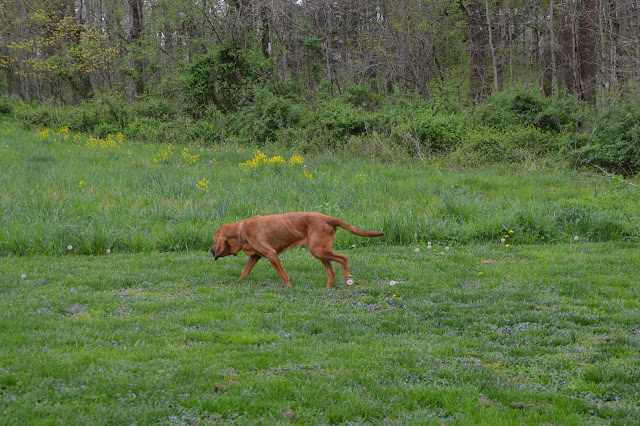 It was nice enough to sit outside cooler temps and overcast skies. Heidi had passed out on the large chair in the living room, the ottoman was not needed in her case. Stella headed one direction and Sadie in another, to check out the field. 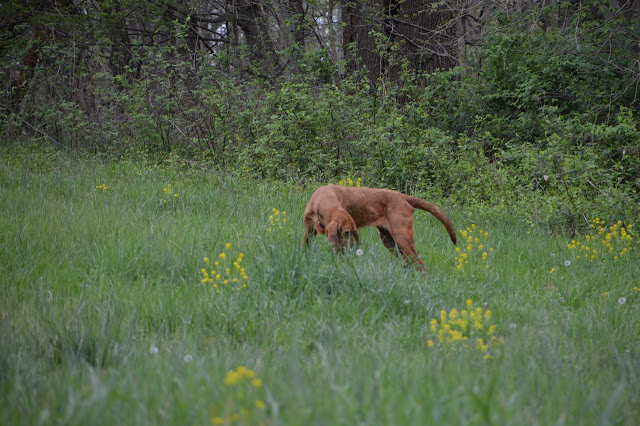 I can confirm there is something wrong with my Tamron 55mm-200mm zoom lens. I tried focusing on Sadie while she was in the field with the Single-point AF setting ... it would try to but never did focus on Sadie nor the surrounding grass/flowers. 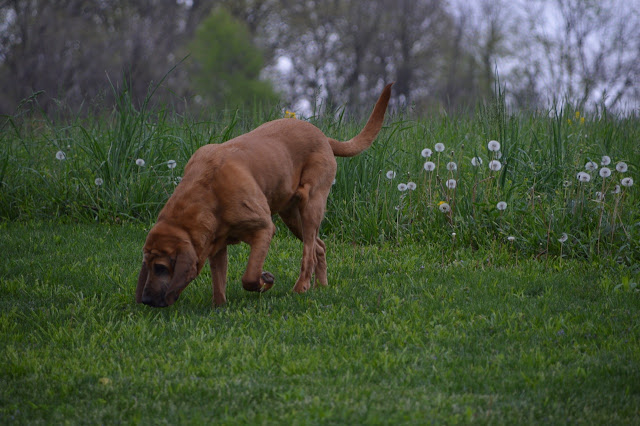 These next two pictures were taken with the Auto-area AF setting. I did not call either hound while they took their time wandering. I had my weekly flyer in the mail from Saturdays' delivery and looked through that along with the Menards and Orscheln's sales ads while the hounds looked around. 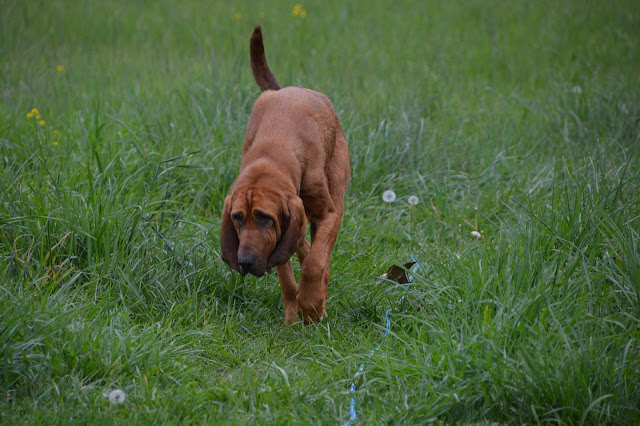 They both came back to the yard on their own. 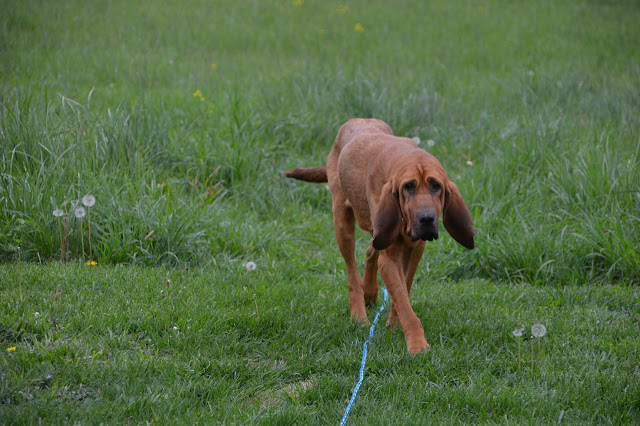 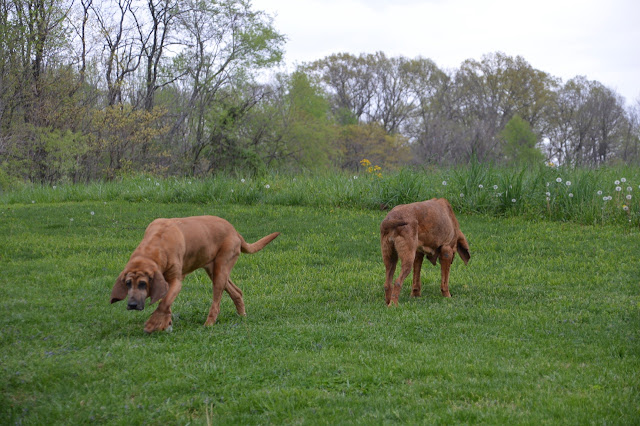 Stella was waiting for the sunshine or waiting on that southwestern wind but neither showed up. While Sadie tried to make an escape into the woods on the opposite side of the yard, behind the burn pile, Stella remained in deep thought. 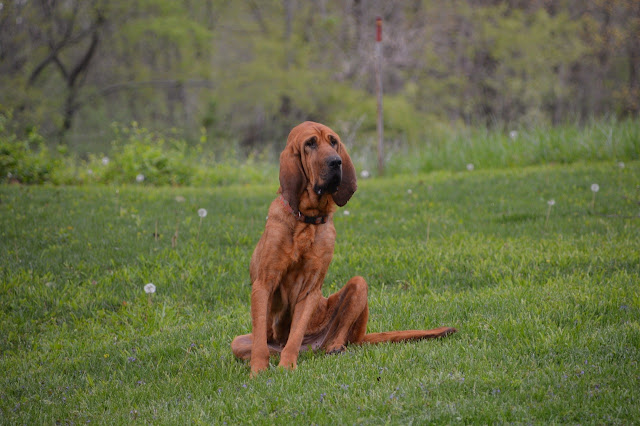 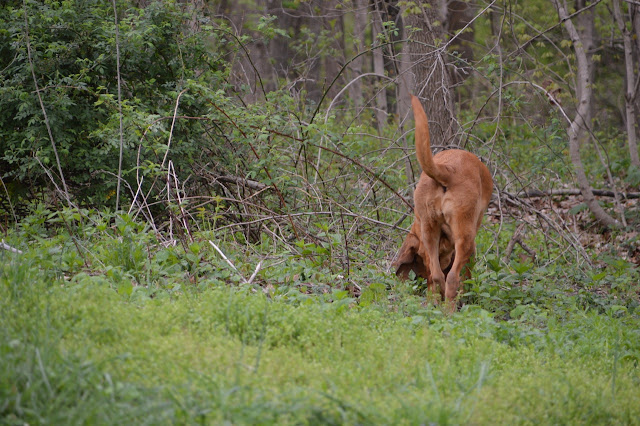 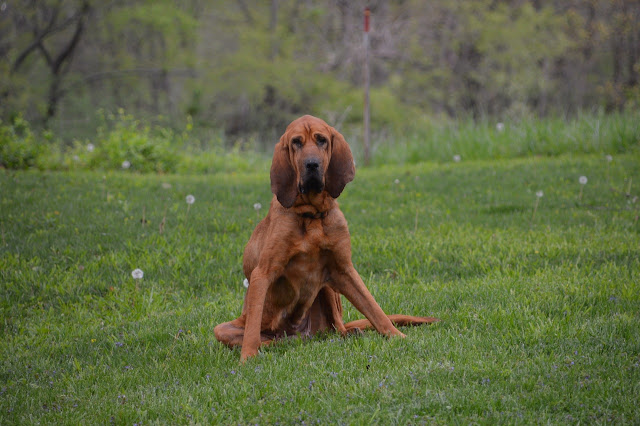 When the hounds walked back to the house that was the sign it was time to go in. They were both back to sleep after a strenuous afternoon.

I have a little rambling below today but no complaining. 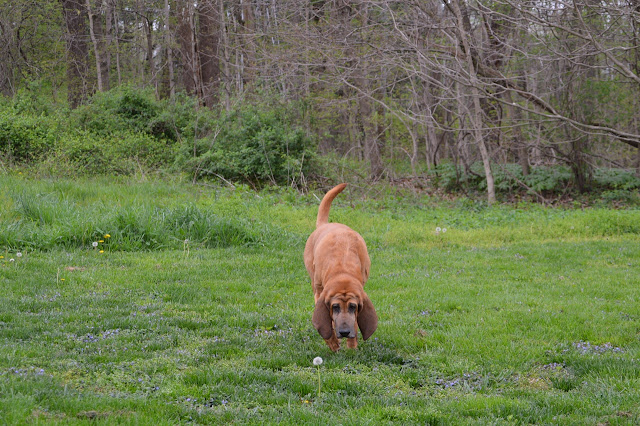 Evidently my dream of blogging must have happened due to amount of time I've thought of blogging the past few days. I was already to write a post about my thoughts on blogging until I saw today a post I wrote just last November about the same topic. It is listed on the right sidebar under "Past Year Favorite Posts".

At times the mental fight whether to continue a blog is the same as the times where words do not come easy to post. It's really hard to put your finger on what keeps bloggers blogging year after year. Why do some keep going, some disappear without an announcement and others let you know they are leaving?

I have tried cutting back at times but when I start writing the urge is a daily thing. I have found it very hard the longer the blog goes of skipping many days between posts. Yet, when I first started this blog in 2011, I wrote less than a 100 posts per year and with few pictures if any at all.

The other thing I find interesting is just one word in a blog post title can double the amount of visitors just like that. Yesterday's fire starter was the word "complaining", it doubled my number of visitors.

Readers like drama, or stories and pictures of traveling and even hearing about Stella destroying my house during a period of separation anxiety. Comparing 'action' like that to our daily routine 95% of the time makes me wonder at times if the blog is on it's last legs.

I see that Exede has received my returned equipment so I should be off the hook for any further billing by them. I love setting up the automatic payments from my accounts but hate trying to get them stopped when the account is paid in full.

I tried starting a couple of new books over the weekend without much success. I have no urge to read, no urge to work on that 'to do' list today. I think I have pretty much written this day off.

Thanks for the emails and blog comments after my venting section yesterday. The bottom line is, the increases do not amount to that much money but I hate being "nickel and dime".