The Hounds Approve The Final Phase Of Bank Clearing 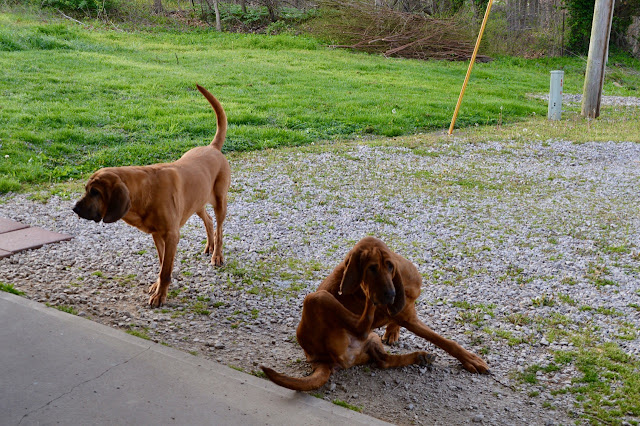 After the hounds did some early morning stretching, we took off for the morning walk about an hour earlier than usual. I needed to be at UPS by the time they opened at 10am to drop off the package to return to Exede. The grounds were wetter than normal, hiking boots were soaked by the time we got back. 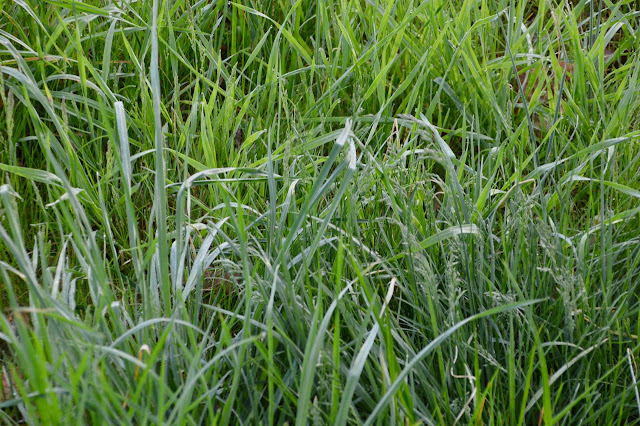 I did not catch her on camera but Stella did a little running to catch up at the start of the walk. After she did catch up with us, it was nothing but her slow walking after that. 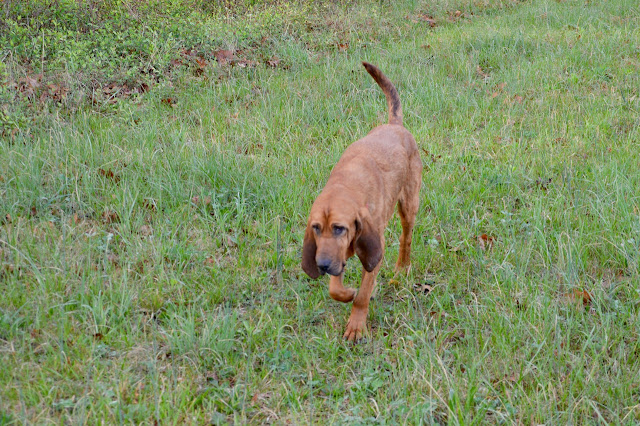 I am assuming it was deer scent that made the bloodhounds so interested this morning. I have seen a lot of deer grouped together in this same spot around sundown in the past. They are usually heading back into the woods by the time I get my camera ready to take a picture. 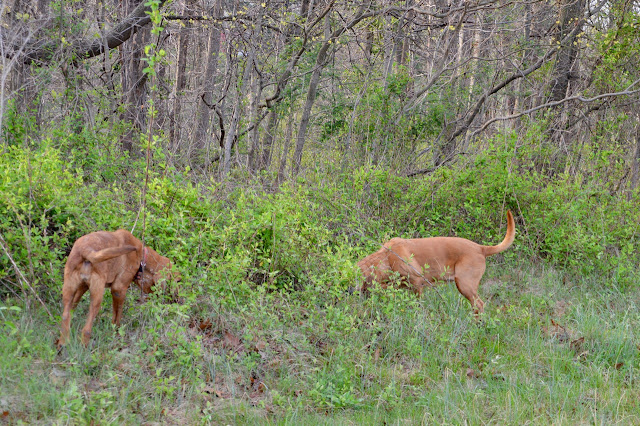 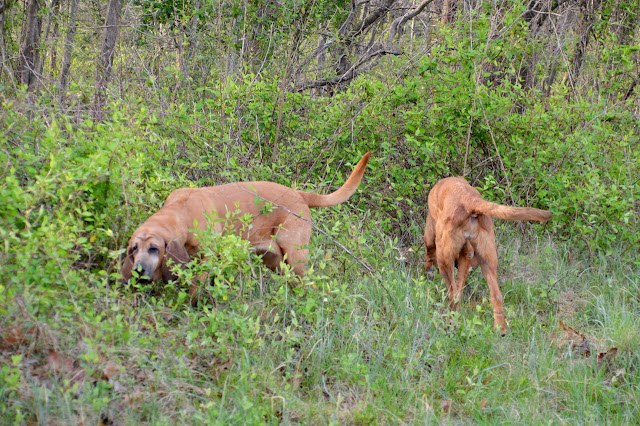 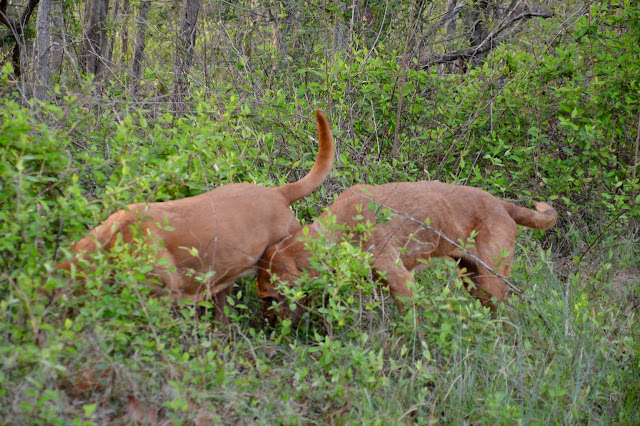 It was to the point I was beginning to wonder if they were going to leave this one spot. Stella was determined to stay but I kept calling her because I needed her to follow us on the walk since I was a little tight for time this morning. 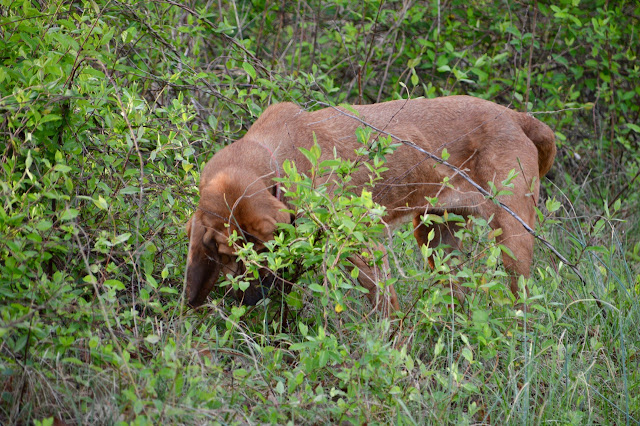 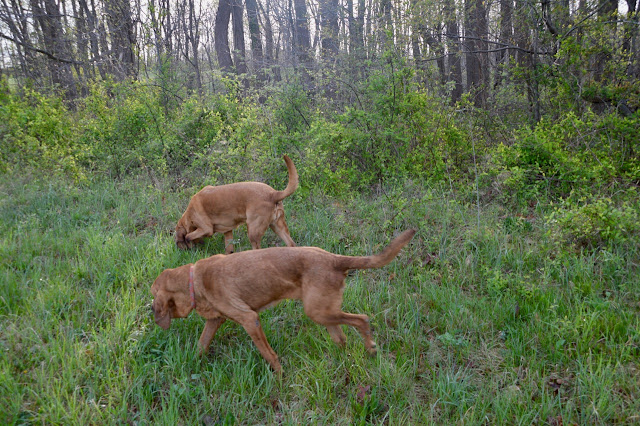 That long narrow path they are following is used by the deer. Those same type of paths are scattered in different parts of the field always leading to a wooded area. 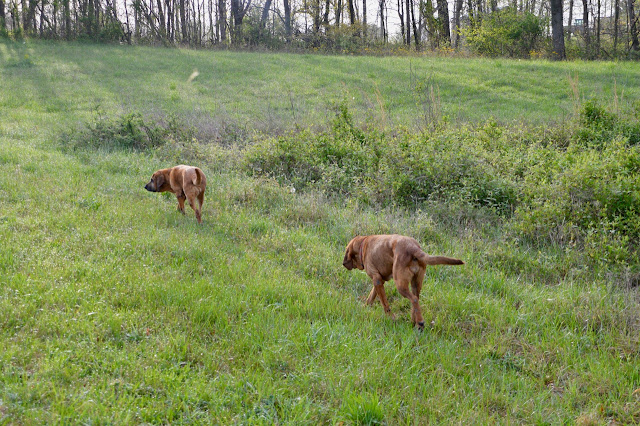 The last time I checked as I made the final turn home, both hounds were behind me. Once Sadie passed me and Stella wasn't with her I turned to see what she was doing. She was testing me to see if I was paying attention to her. Stella was headed at a 45° angle away from us and pretty far behind us. 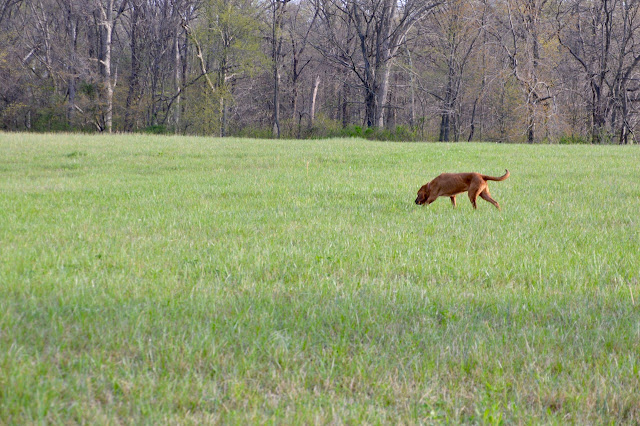 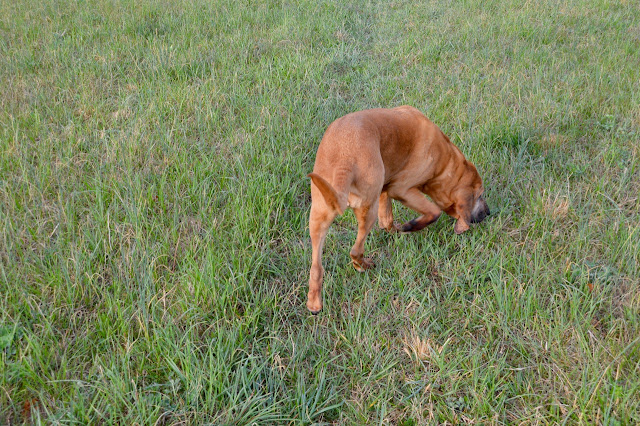 Stella wasn't stubborn this time. As soon as I yelled "over here", she turned and trotted slowly back to the path I was on. It was a slow walk home from there. I think she was just checking to see if she would get away without me noticing. 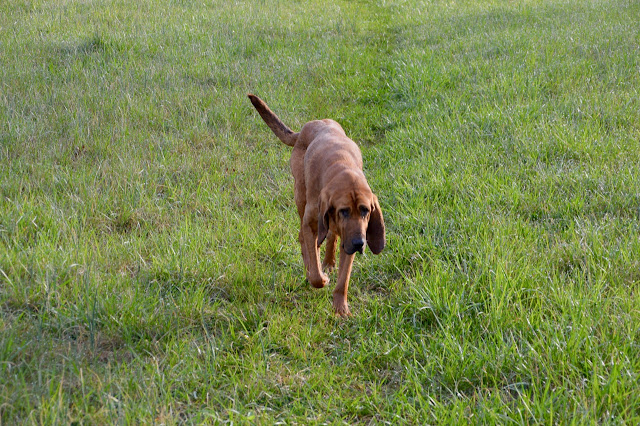 Right after we got back from the walk I loaded the Exede box in the small Z4 trunk, lead the hounds to the bedroom where they stay while I am gone, and took off for UPS 25 miles away. I would be taking a great sports car road, two lanes with a lot of curves and hills. Mentally I was prepared for one slow vehicle to back all of us up at 45 mph.

Yet with the top down and 70° it was a great drive. 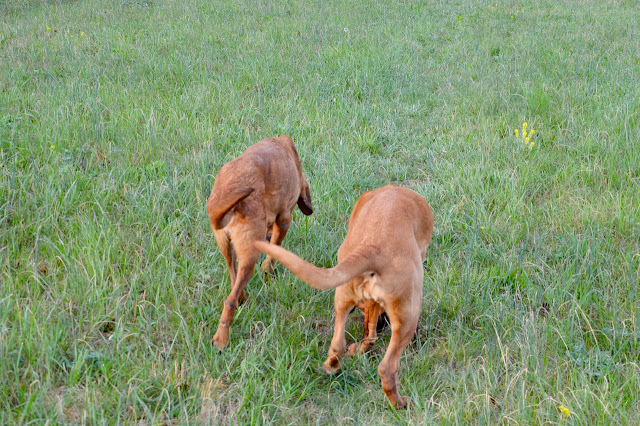 By the time I made it back from the 50 mile round trip, Heidi was barking wanting her lunch time kibble. Stella was soon to follow with her bloodhound howling. I thought it might be too early but it was close to 4 hours since they had their breakfast.

Once lunch was finished it was time to start the final Phase 3 of the bank clearing project. Under the watchful eye of Stella, I pulled out the needed tools for today's job. 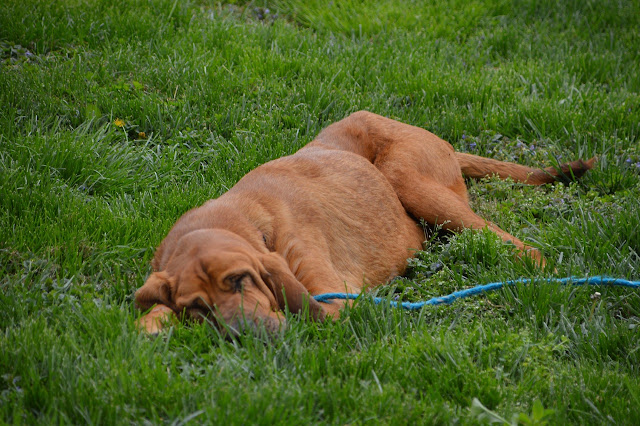 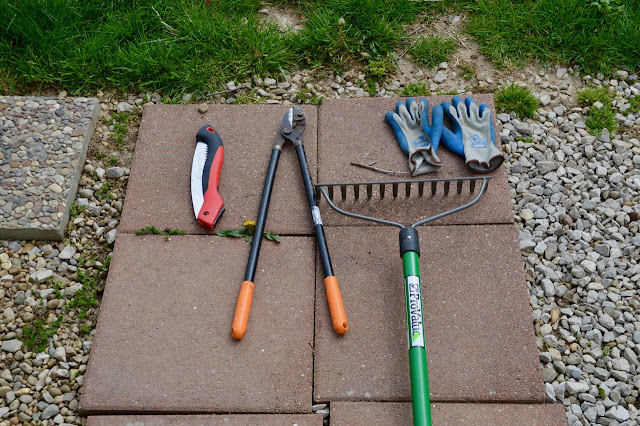 It was a little cloudy but radar showed there wasn't a chance of rain anywhere. The plan today was to cut the few remaining stems or saplings that I missed two days ago. A lot of times the brush is too thick for me to get to all of them so I always go back to cut the stragglers after I burn the first time. 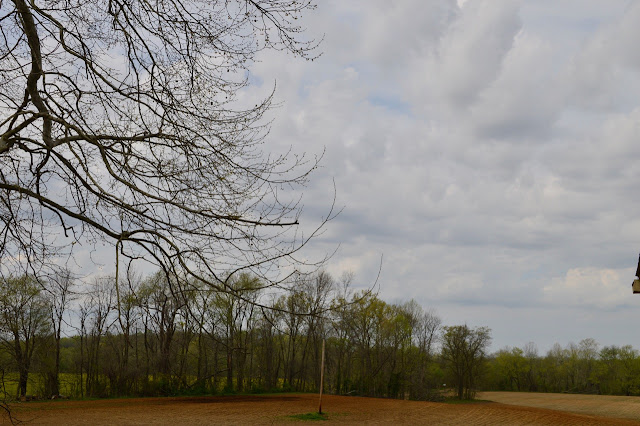 I always rake any loose limbs or thick vines down to the bottom of the bank and burn as much of them as I can. I knew that all would not burn but enough of it would. Sadie was more than happy to supervise from the top of the hill. 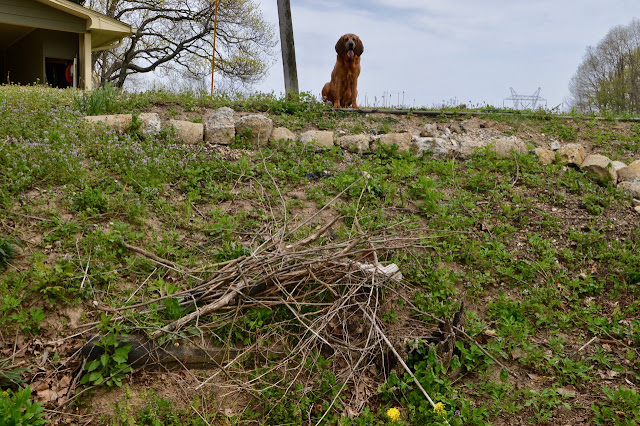 As you can see the builders of the house in 1975 spread a pretty good amount of rock along that bank. I added the rip rap last month to an area for added support. 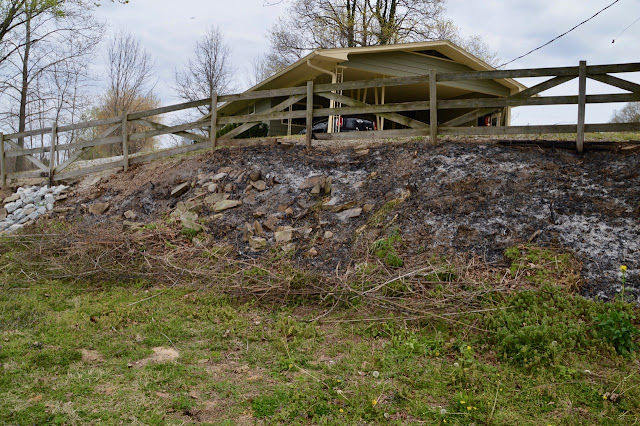 By now I had cut all that was left standing and raked what was remaining to the bottom of the hill. It was was time to see what was going to burn. It's ugly right now but it was have new growth in a month and all of this will be covered up with green ragweed most likely. 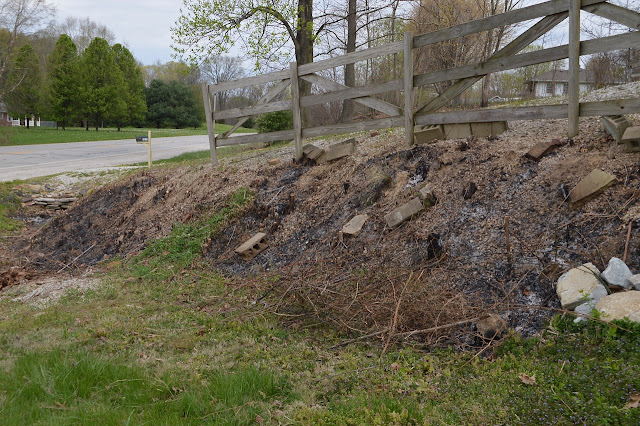 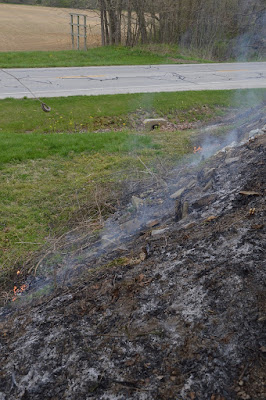 I did not get as much burned as I was hoping for so I'll leave it stacked where it is and try later this summer or wait until next fall when there is not such a fire hazard.

It has been suggested to me many times to have someone lay rip rap on the whole bank. I agree with them it would look fantastic and at the same time help in preventing sole erosion.

It would take close to $10,000 to lay rip rap on the bank that is 150' or longer. At the same time all of those people with the suggestion don't seem to be offering any of their cash to pay for the job either ... LOL


After letting the vines set for the winter a lot of them still are not dried out enough to burn. I have carried away most of the green limbs to my burn pile prior to setting any fires. 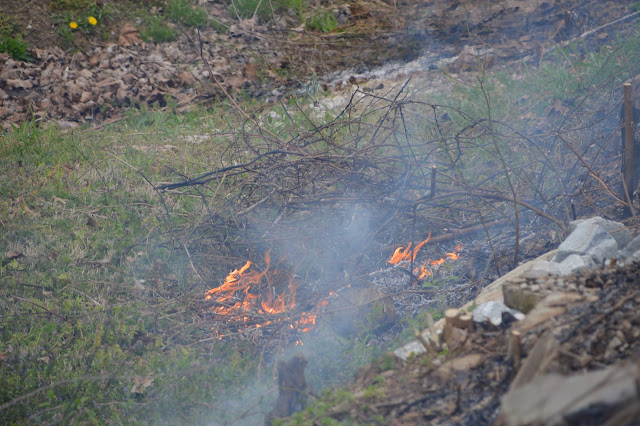 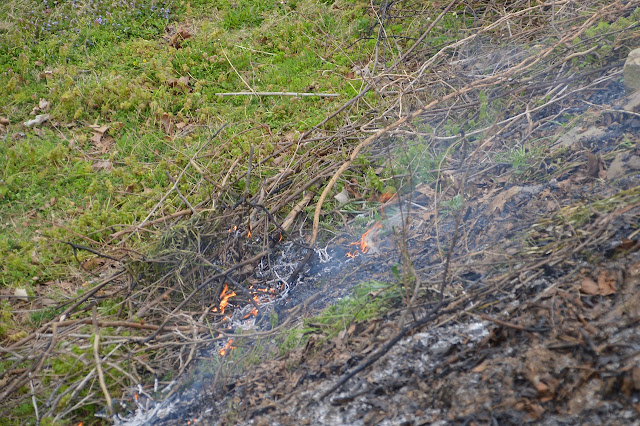 By the time I took my last step into the driveway after climbing the bank, Sadie was wondering what was next on the 'to do' list for the day. I had enough energy left to wash one car but not two. The Mini Countryman needed washing more than the Z4. After it was washed and all the car washing equipment had been put away, I walked in the house finished for the day.

I was shocked to see it was only 1:30pm after all the stuff I did today.

It was tempting for a siesta, especially with three sleeping hounds scattered throughout the house but I decided to brew up a fresh 3qt container of ice tea, grill come chicken for my salad and see what the afternoon would bring.

With enough energy expended for the day, I doubt there will be much more to blog about today. So I'll post this in the middle of the afternoon ... with plans of mowing the yard and washing the Z4 tomorrow before the rains come on Sunday.