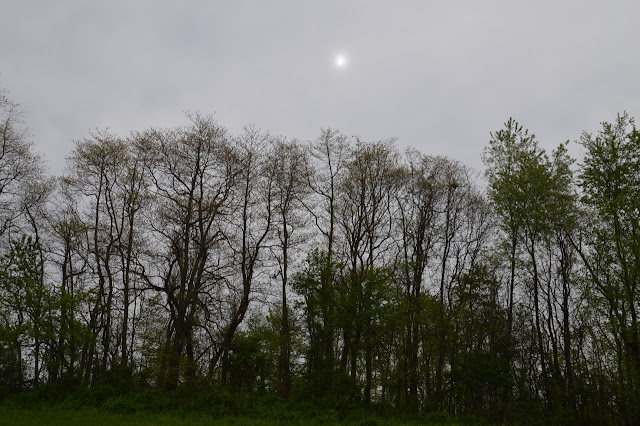 The weatherman wasn't joking the other night when he said those afternoon rains Thursday afternoon would bring cooler temps behind it. Nothing drastic but a 20° decrease was somewhat of a rude awakening this morning.

All that meant though, a sweatshirt had to be added to the shorts and t-shirt combo for this morning's walk. Sometime in the middle of the night I woke up and shut all of the windows due to the cold breeze blowing inside.

Sadie did not show her normal excitement for walking Friday morning, at least inside, as I was getting ready. Stella was still sleeping on the floor behind my desk chair and Sadie even laid on the floor while I changed shoes for the walk. Usually Sadie is giving me 'the stare' to walk by 8:30am. 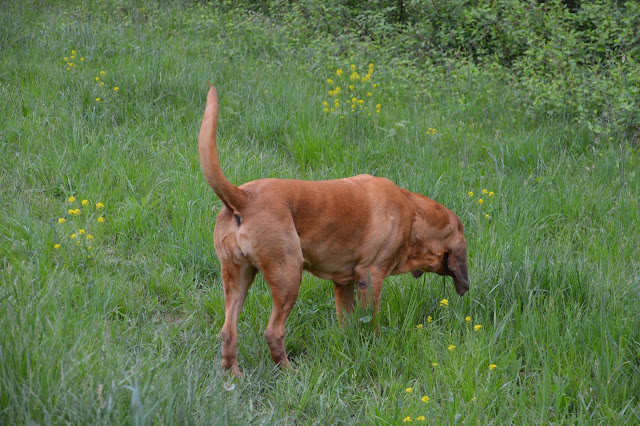 With more rain scheduled by 2pm Friday I was hoping the grass would be dry enough to mow before then. Without a hot sun and very cloudy I wasn't sure it would be. I had to mow the yard before 2pm no matter what. The grass is tall and a prediction of rain Friday afternoon and all day on Saturday I cannot afford to wait. I was able to get it cut with time to spare. 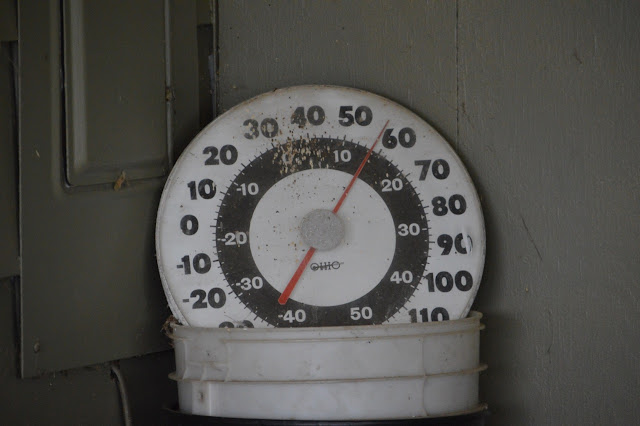 I decided about a foot outside the door that I was going to let Stella do whatever she wanted and go where ever she wanted on this morning's walk. I figured the worse case would be me having to walk over to the neighbor's woods to get her.

It was surprising to see her trotting to catch up to us and continued to follow the path along with me. Sadie had already locked into a scent and fallen into a unconscious state, taking off on her own exploration. 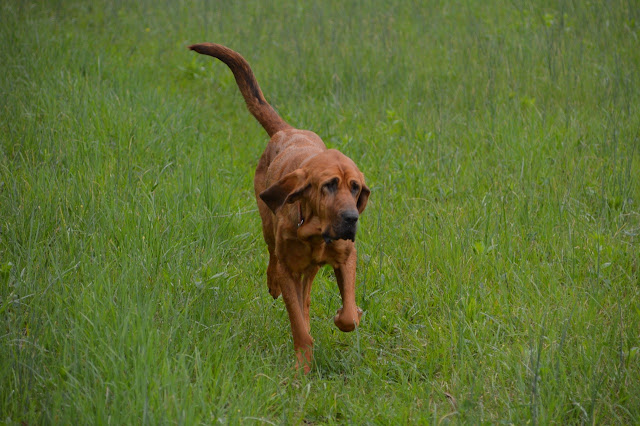 Sadie showed the most excitement of the day when she buried her head into the tall grass. I could hear her jowls making that strange noise bloodhounds make as she inhaled her newest adventure. 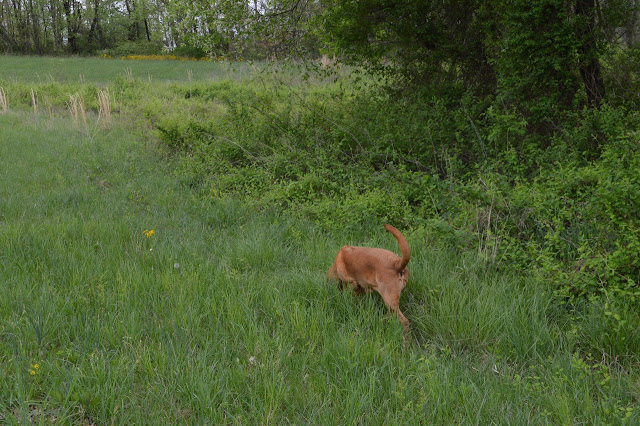 Stella was taking her normal stroll along the path. It's Friday and to her there is nothing to rush. 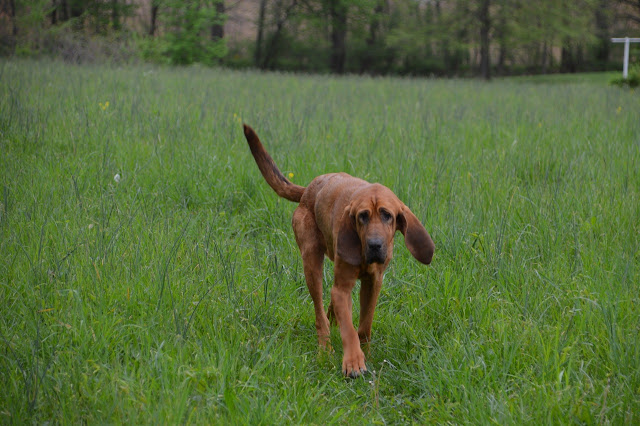 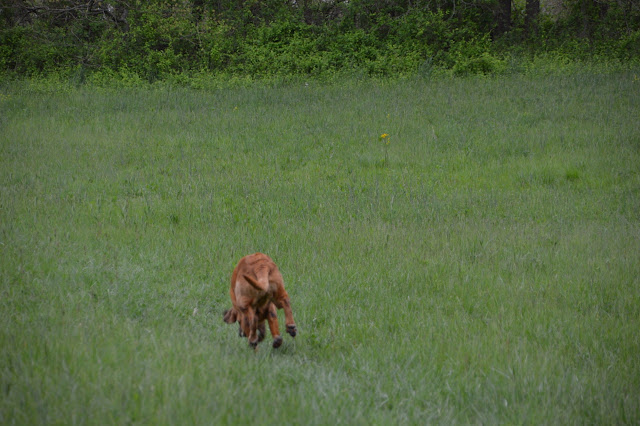 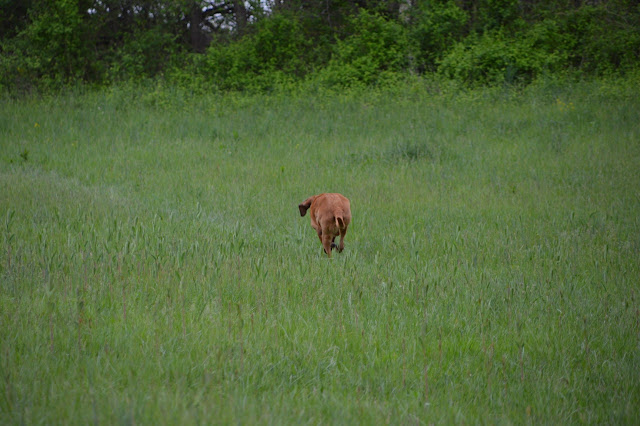 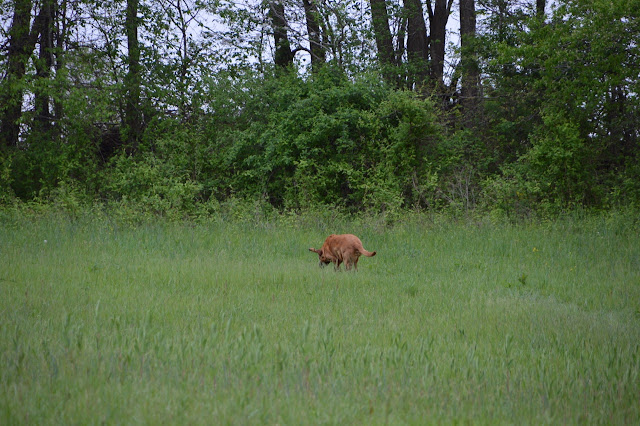 At this point in time she knew "they" had to be nearby but where were they? Who is they?? The deer of course. 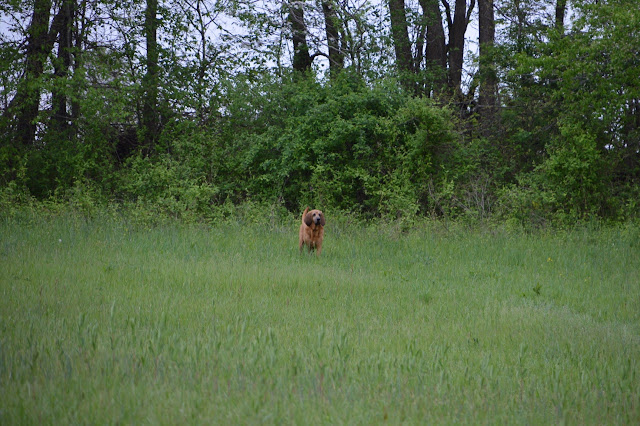 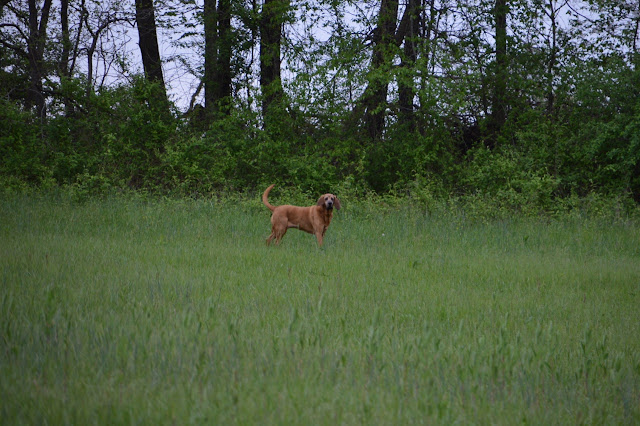 More searching was involved but she still did not come up with any answers and didn't find the suspects. 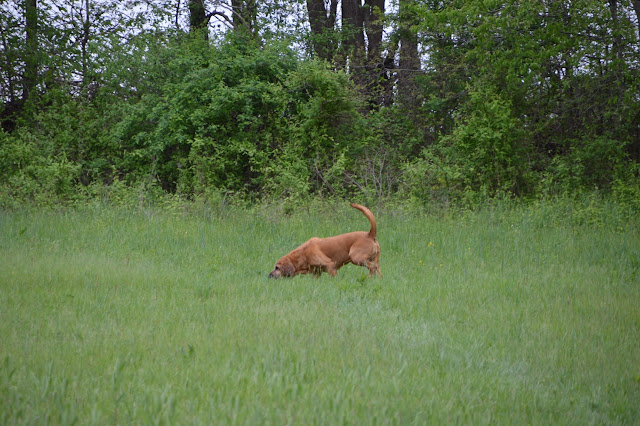 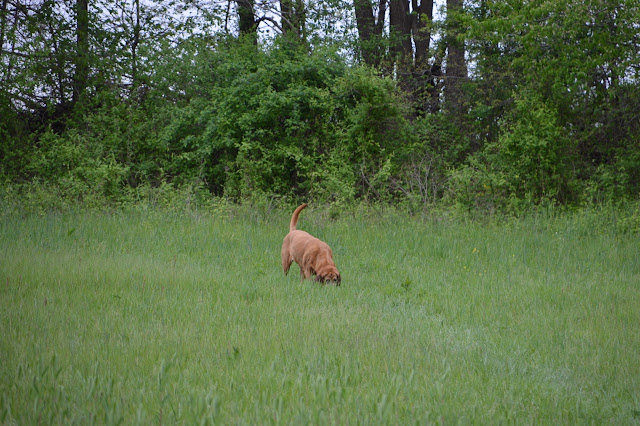 The lack of results didn't slow her desire and she continued to search at a frantic pace because she knew they had to be here somewhere. 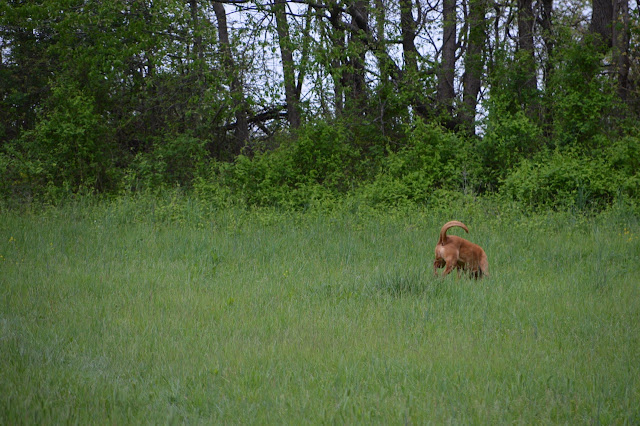 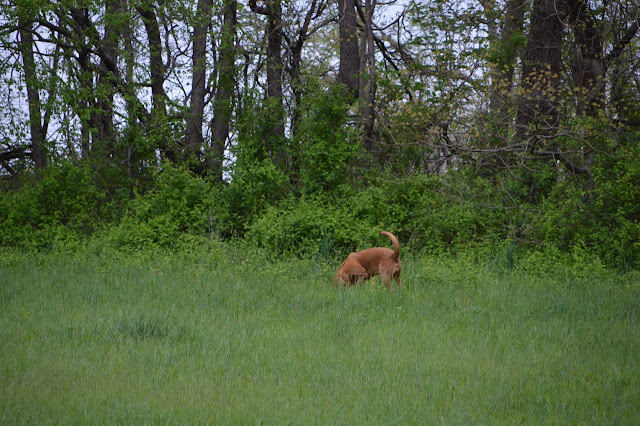 In the past Stella would have sprinted toward Sadie as soon as Sadie started running ... but not today, she stood looking, barely wagging her tail. 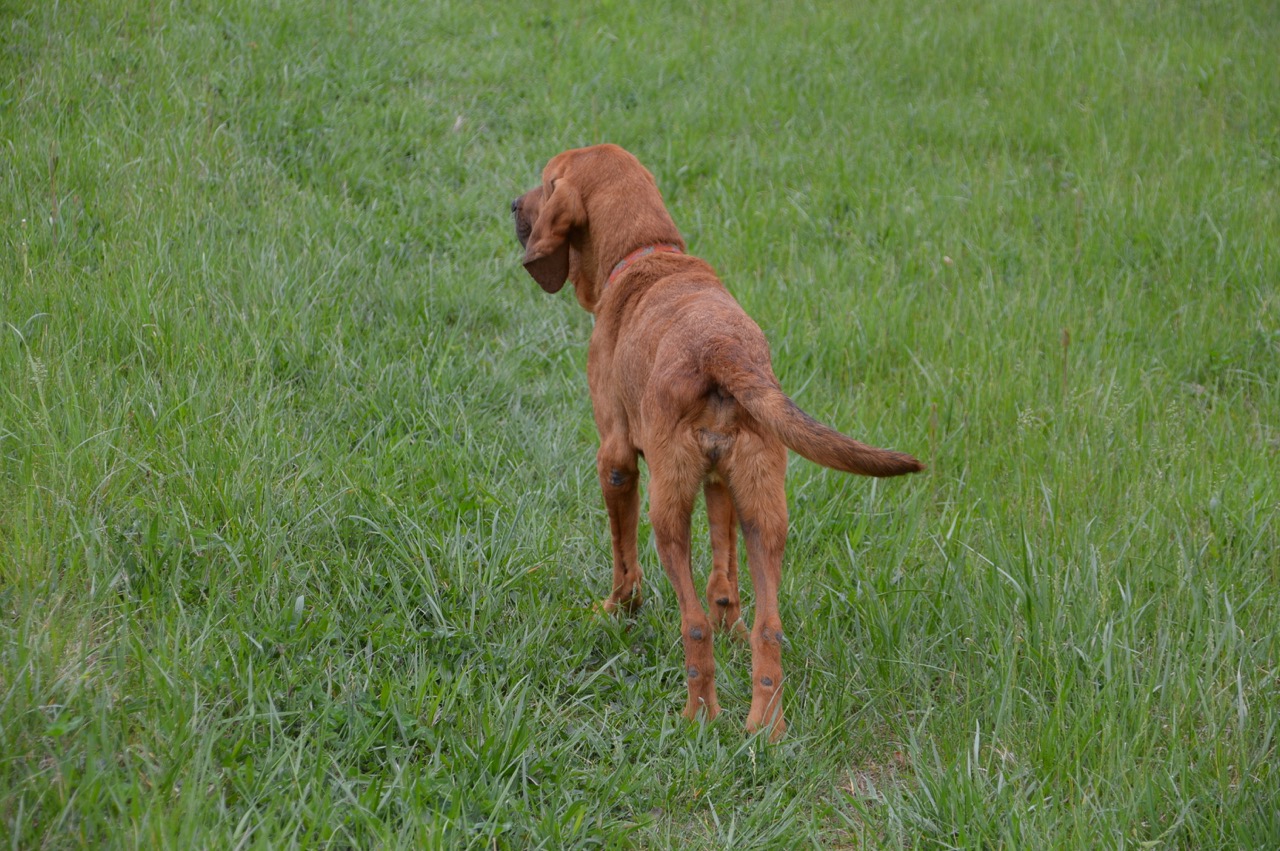 Sadie in the meantime had finally called it quits. She knew the deer had headed into the 'no fly zone' and she had done all she could do today. Looking back through pictures from a year ago, Sadie and Stella had a great deer chase this time last year ... really just a few days ago last year. 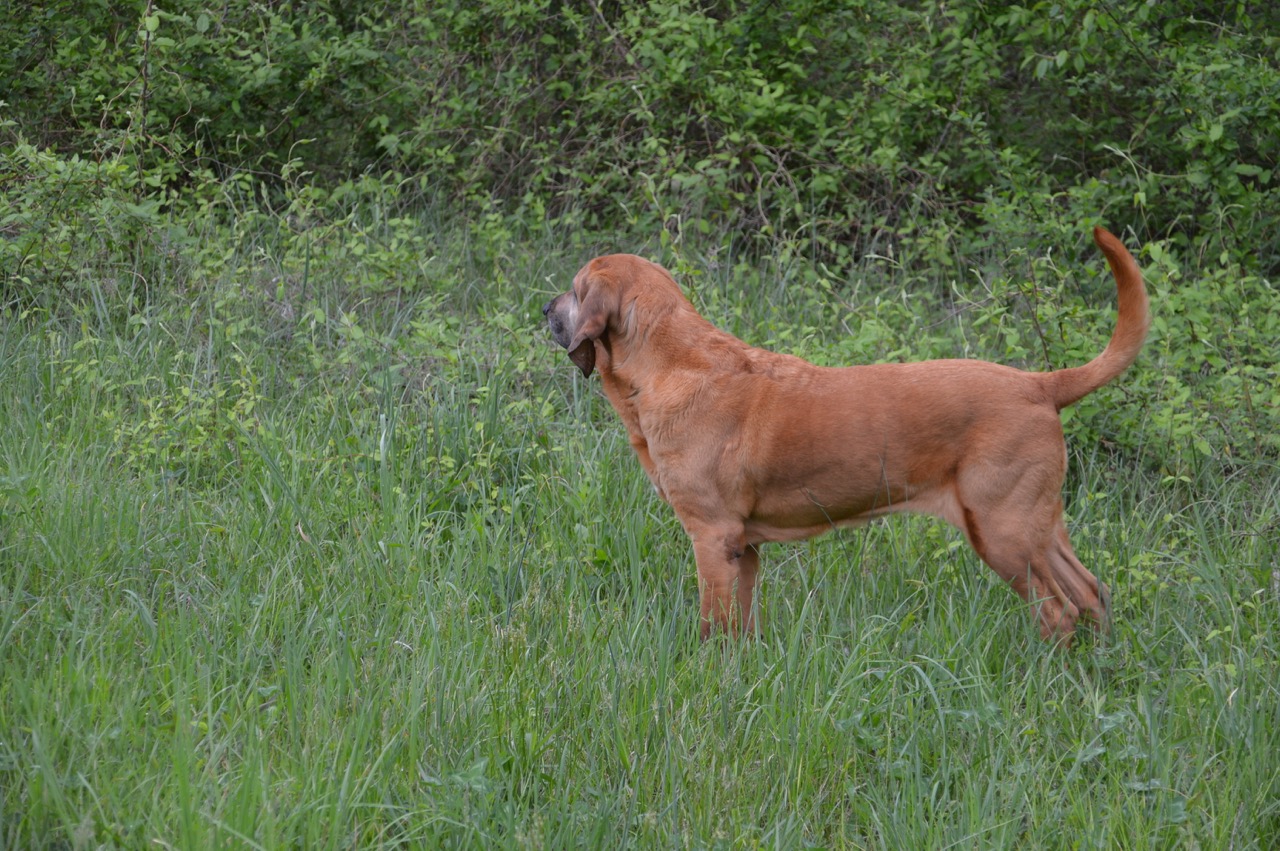 It's times like these as a pet owner, you wish they could talk verbally and tell you what is wrong with them. Every test, exam, her systems are normal and that is what is confusing the situation. 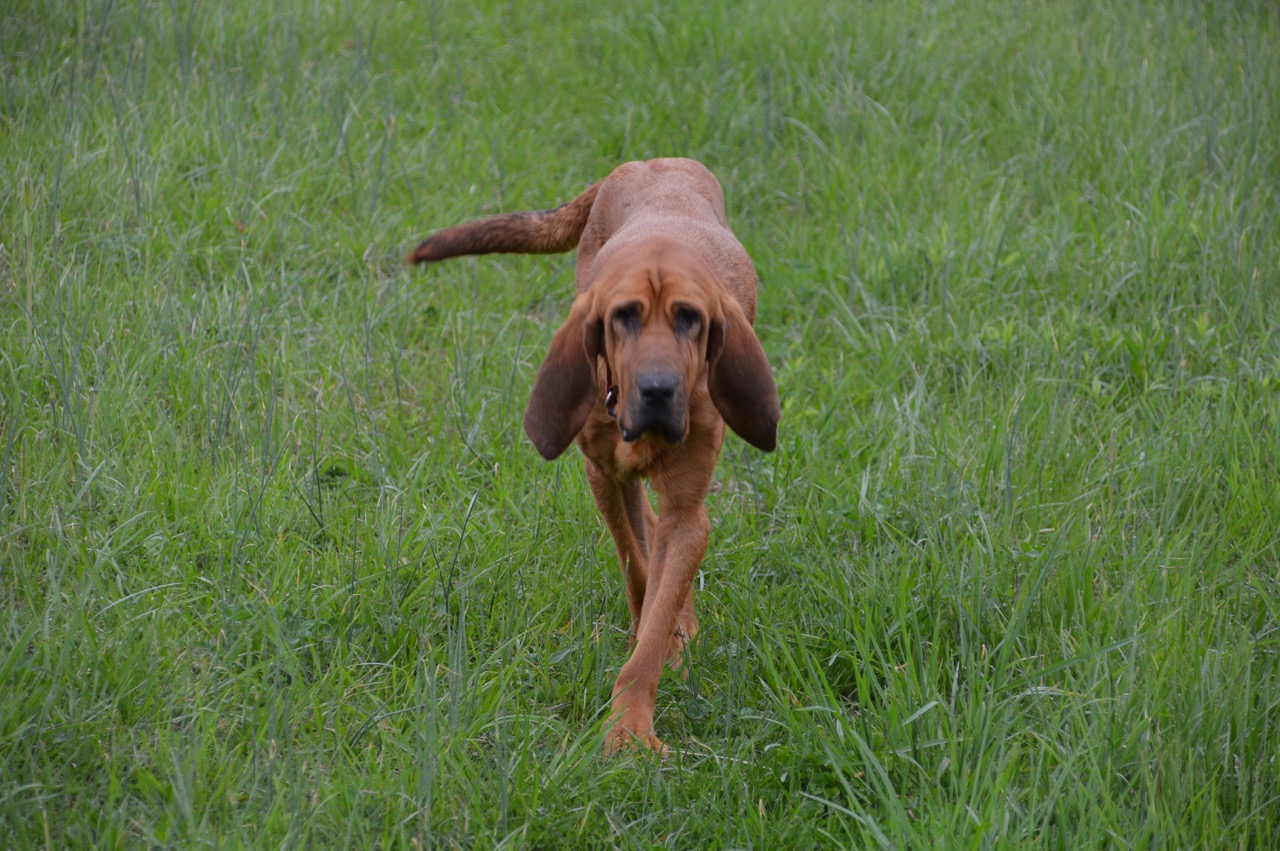 She leisurely strolled toward her favorite wooded area but I found out she was only following a scent and then moved back in Sadie's direction. She seemed to follow this same path the past week on both walks of the day. 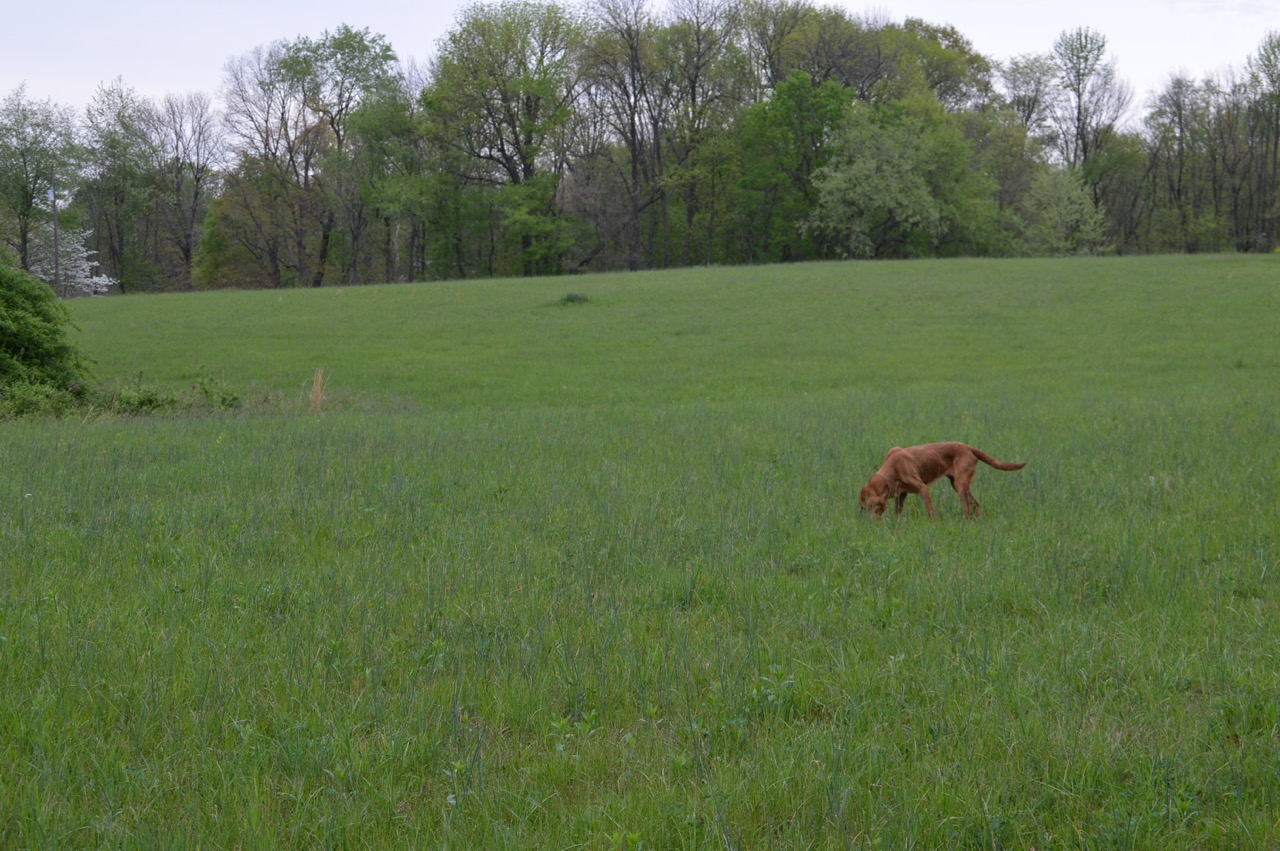 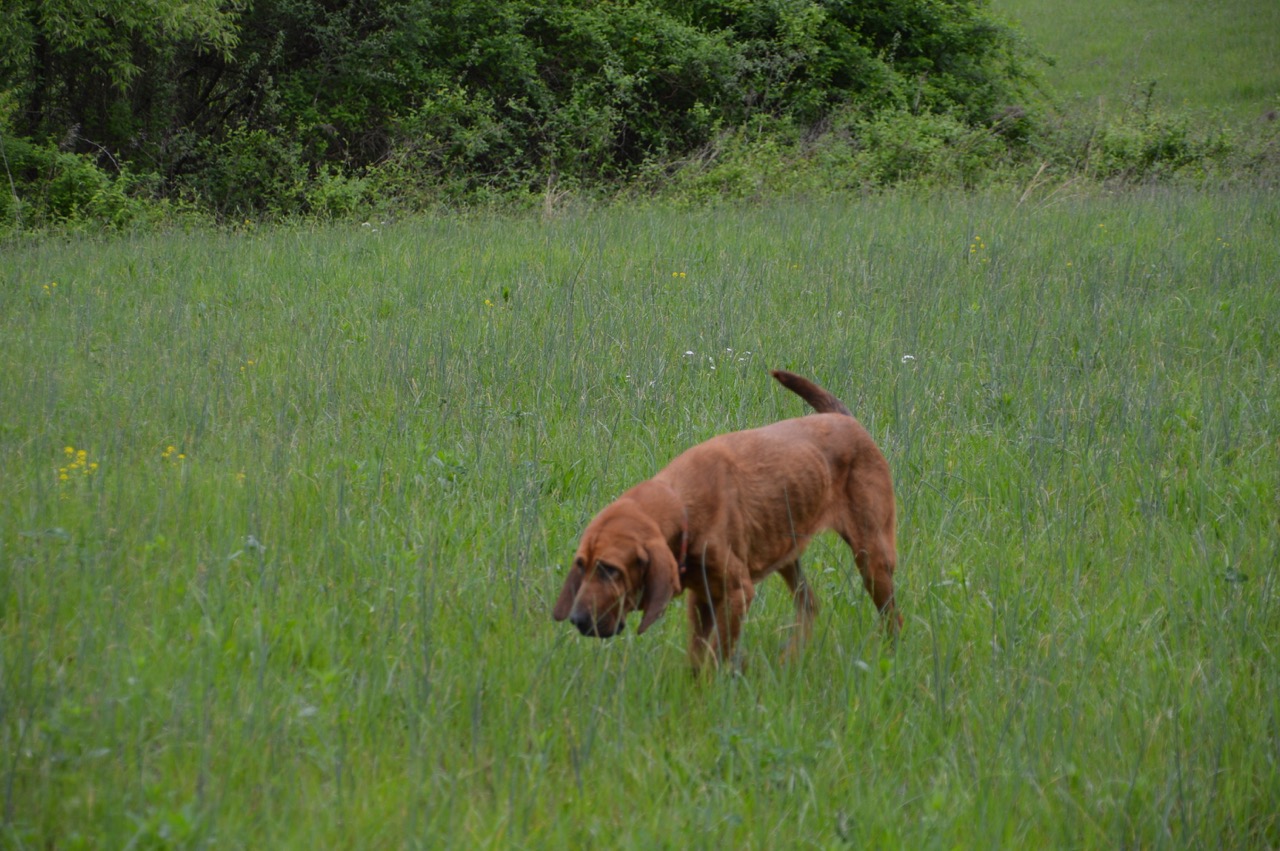 With Sadie and I on the south edge of the yard, Stella walked straight for the house door. Not even a glance in our direction. It was too early for lunch, so that wasn't her reason. Once I sat down at the computer to download the pictures taken, she curled up behind my chair and went back to sleep. That is her normal routine until lunch is served. With the vet having walk-in hours until 7pm, I waited until the end before taking her over to the vet. The last time I went at prime time in the afternoon, the place was packed and I was there almost 3 hours. A different vet at the small facility wanted to see her and do a different test. 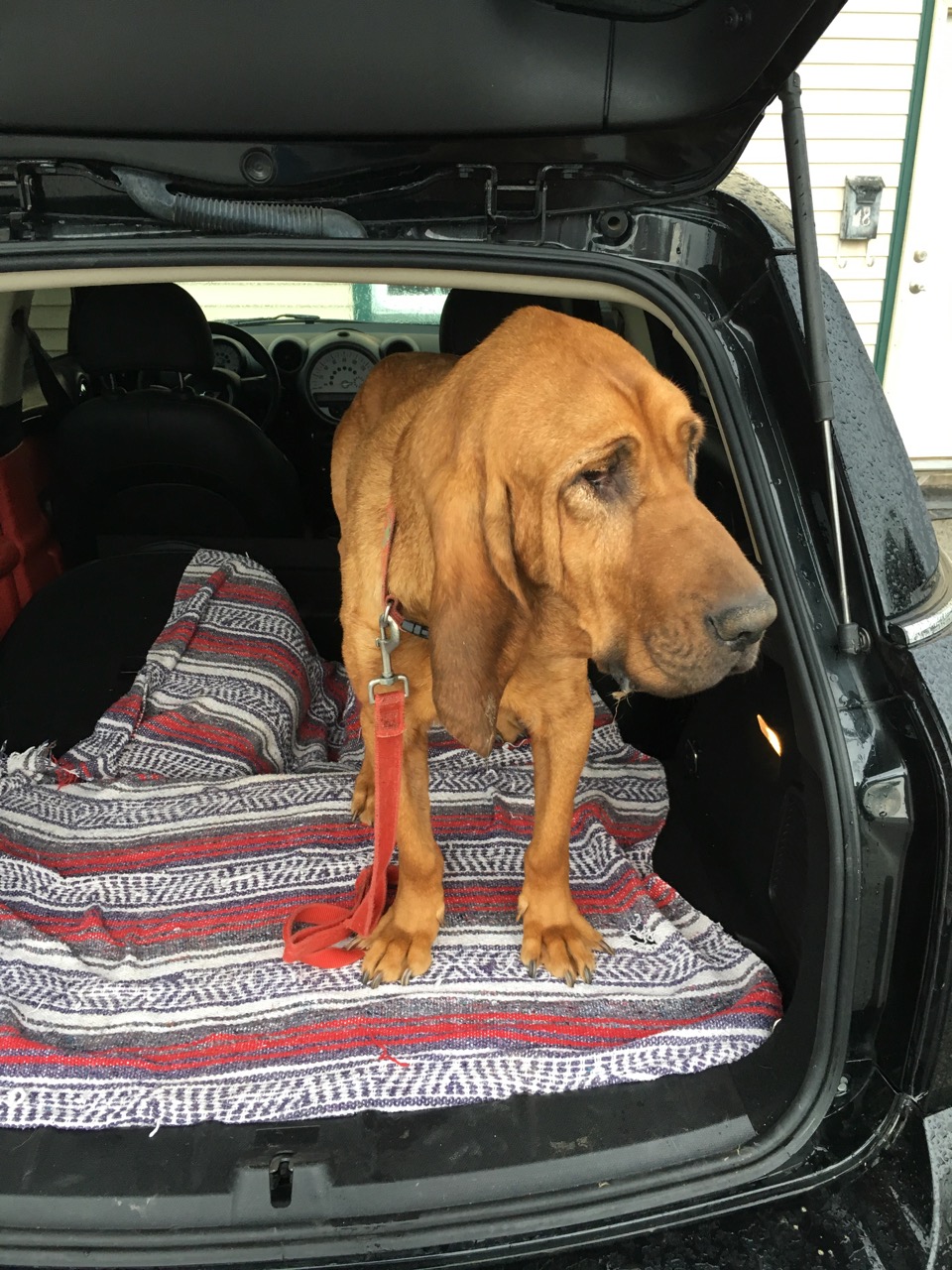 He gave her a heartworm/tick 4DX Combo Test. I was glad to see that all of the results were negative. He thinks it's possible she stopped processing protein from her kibble and suggested changing food. When I told him I was on week 9 since changing food he told me to wait and see how she reacts.

It could take up to 16 weeks before the food change makes any difference. Sometimes I might see differences before that. Stella weighed 65 pounds today.

Combined with the blood work their other vet did and showing everything was normal, with no diarrhea nor vomiting, he does not feel there is anything serious going on with her.

I did find out on the way over, 11 miles, that Stella was able to lay down across the back, side to side, of the Mini Cooper Countryman. She slept most of the way there and back for her first ride in the Mini.

Sadie was thrilled  when her buddy returned home. She started barking, which she rarely does. Sprinted around the house, sprinted outside and then sniffed every inch of Stella while wagging her tail.

So as far as we know, everything is good with Stella and we will take her back in a couple of weeks to get weighed. He did say that as fast as they lose weight it will take longer to put it back on. I showed him the picture of her taken one year ago as a comparison.

Sorry this blog post is rushed, probably not enough detail for some but it's late. I figured some news is better than no news. I'll write more in Saturday's post.

Light rain tonight here in 'the tropics' of southern Indiana.
at April 21, 2017