Hounds Took A Day Off 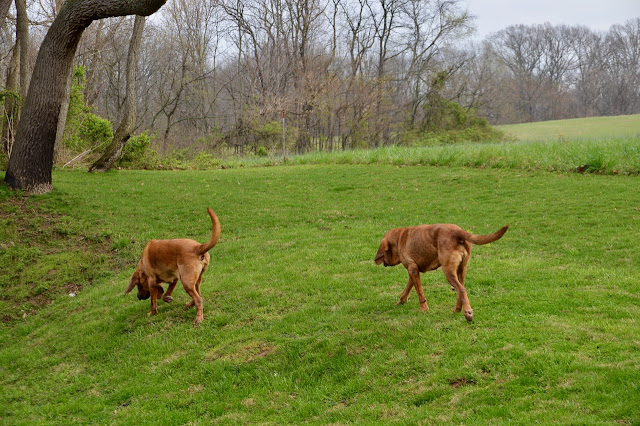 The words wouldn't come on Tuesday when it came time to write a blog post. I had a few pictures but not the normal large number of them to choose from. I thought I'd wait and see if anything came to me by late afternoon. By that time Sadie, Stella and Heidi declared Tuesday was a 'day off', so no blog post yesterday. 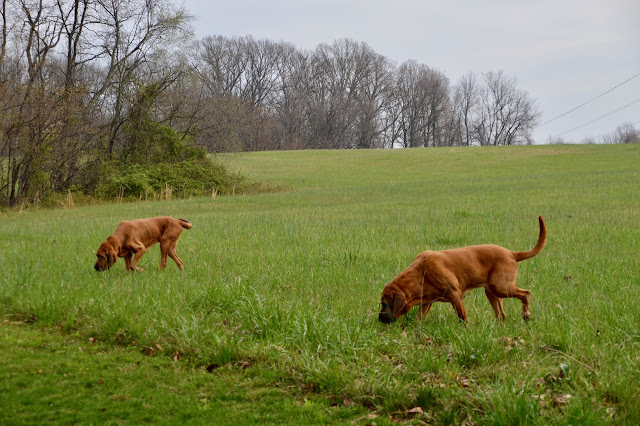 That didn't mean I got anything done. The hounds slept, ate twice, took two walks and then an early evening break outside just roam in the yard or field. I had a very good afternoon siesta.

This morning they started a new routine or a new direction. Like last summer Sadie and Stella took an immediate left walking through the yard to the north side of the field for their morning trip, instead of straight back behind the house. 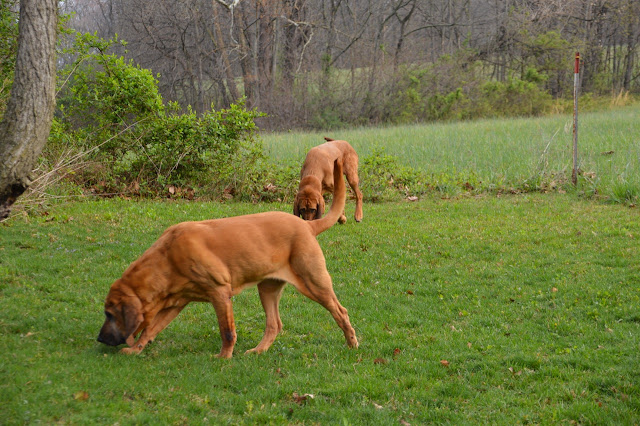 We could feel the warmth a little this morning. The sky looked fantastic as we started the walk and it was hard to imagine that we were looking at a 75% of rain by 1pm. It was the same on Monday but that did not amount to anything more than a light rain. They didn't even have to stop the baseball game in Cincinnati when 'our' storm move into their area. 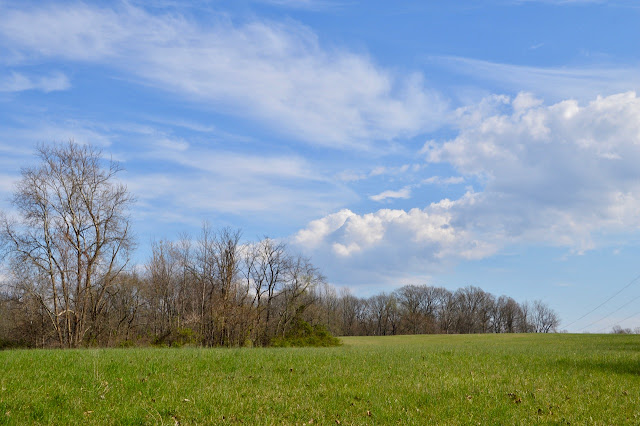 These past few weeks, maybe a month, I have had Stella smell the rolled up 6' leash I carry in my pocket. I don't have any idea of that makes a difference to her but I cannot remember the last time I had to use it. She has been coming when I call her. If she lags behind she will trot a little on the path to catch up.

Sadie is just Sadie ... same routine on the walk every day. She is serious and is only doing it for one reason ... to track scents. 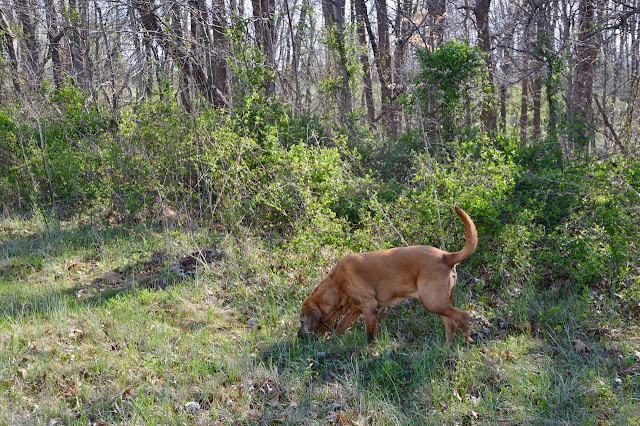 The dark spot on her lower front leg is a place that she likes to lick. She has been doing it for years and it doesn't matter if the brand of dog food is changed nor if the seasons change. Her vet checkups have had perfect results, so maybe it's just a habit. 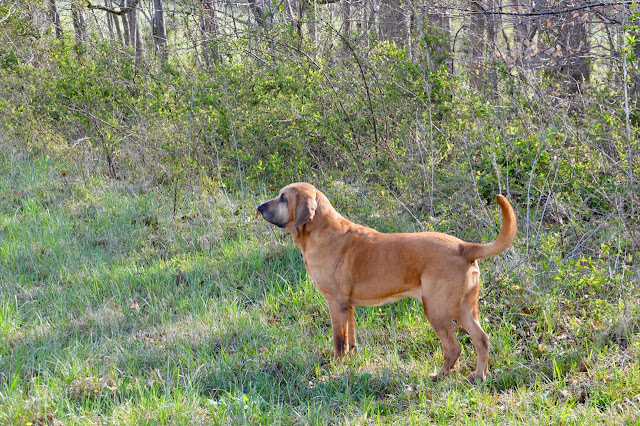 I have to admit I am a little concerned about Stella's lack of running. She use to love running in the field. I'd have to go back through past blog posts or past photos to find out exactly when she stopped her running at full speed in the field. She might trot a little when she needs to catch up but no full speed running. Also, she has not tried to get Sadie to wrestle with her nor playing like they did last summer. 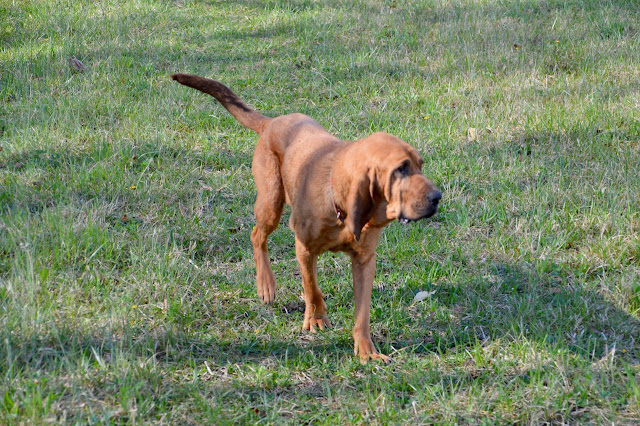 Since her facial expression rarely changes, unless she is being fed kibble or there is food of mine that she thinks is hers. Therefore it's hard to tell if she is feeling good, normal or bad. I have felt around her hips, shoulders and stomach. I have not felt anything abnormal nor has she let out any sounds of pain or shown signs of discomfort.

I wonder if it is just being a year older and her joints are starting to bother her? I may start giving her a joint supplement and see if that makes a difference and/or have the vet give her a blood test to see if something is going on inside of her. 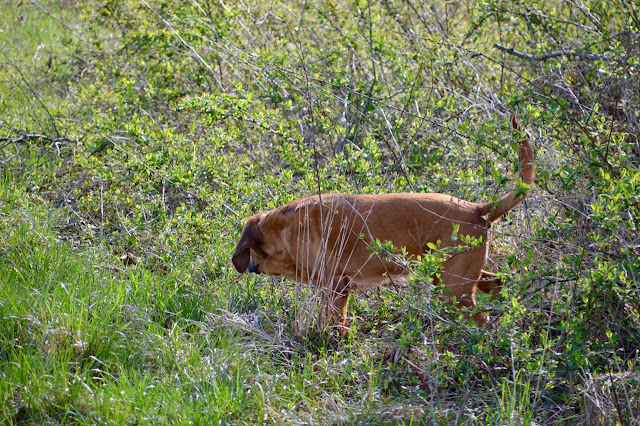 Sadie has never been bothered by those sharp thorns when it comes to walking through thick bushes. As a very young puppy she laid open the inside of her ear and it looked like she had been cut by a razor blade. That is how smooth the cut was. That required a few stitches and the scar looks very clean almost 9 years later.

She was focused on deer scent today. I wonder if Stella would run full speed if deer suddenly appeared? 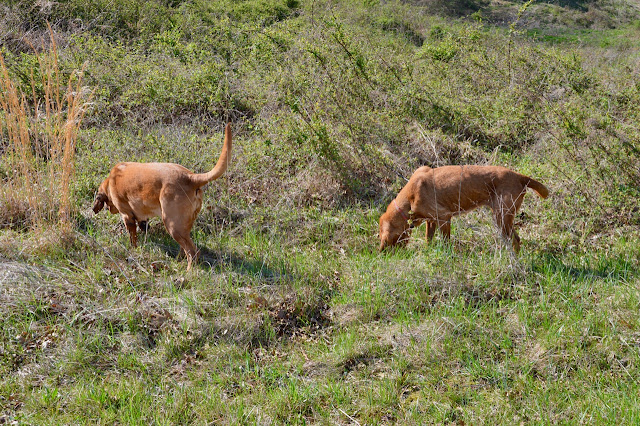 I was letting Stella do anything she wanted on the walk today. She could go anywhere at her pace. Every time she would catch back up with Sadie and I, then would continue her slow walking. 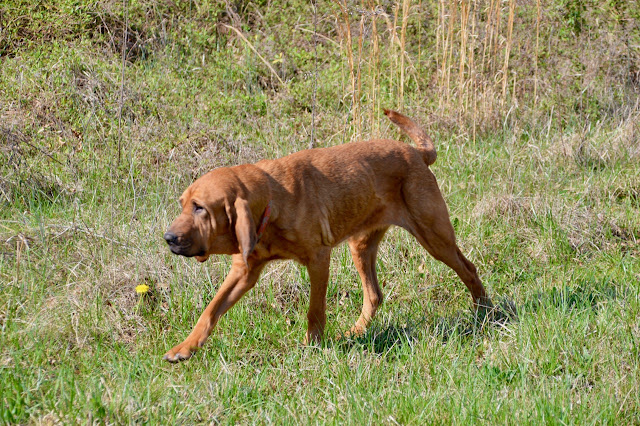 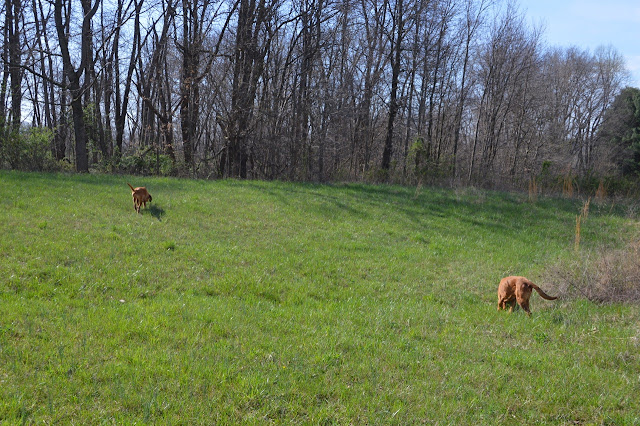 While Sadie had moved up along the edge of the field in back, Stella was taking her time slowly walking toward me ... that is until she heard that gunshot from the farm behind those trees. 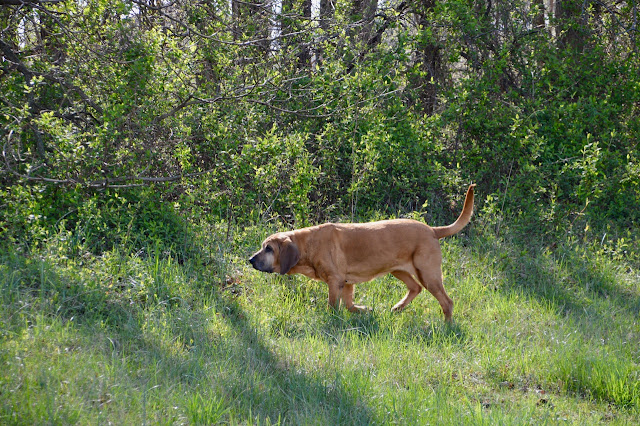 She has always been 'gun shy' when there have been gunshots in the area. She didn't sprint out of control and take off but before I could get my camera up and focused she was walking right beside me. For most of the walk from that point forward she didn't get more than 6" away from me. 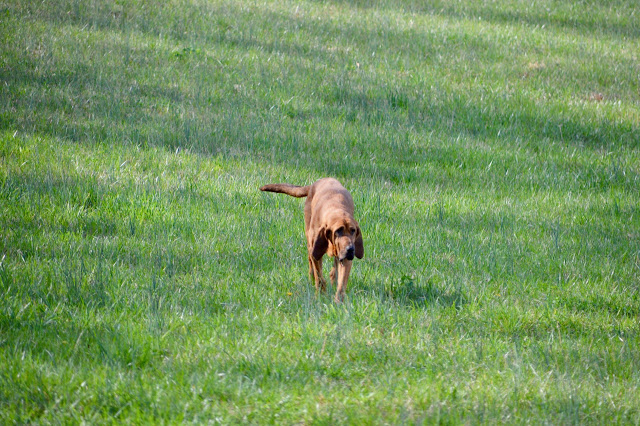 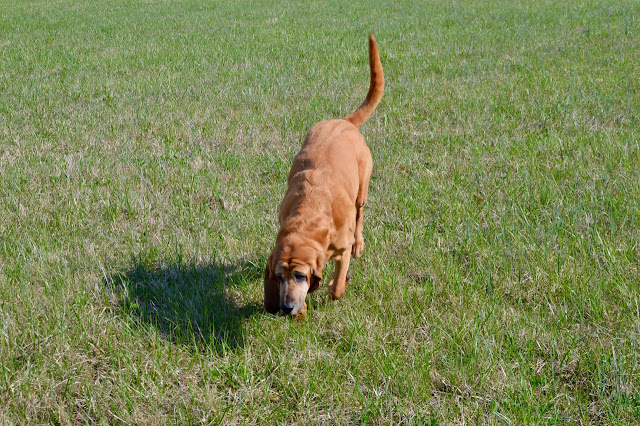 As I stepped off the path to get a side view of Stella for a picture, there was another gunshot. You can see her reaction by the way her ears are folded. By this time she is in a slow trot along the path. 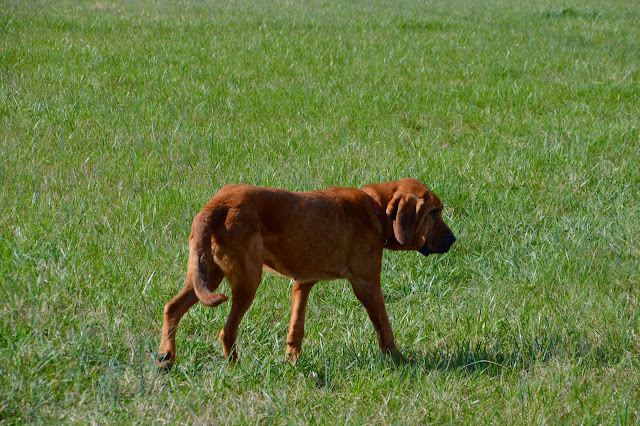 Before she finished her walk home, she needed to take one final look toward the neighbor's wooded area behind their house ... I had a feeling she was 'looking' for that big blonde cat we saw the other day. 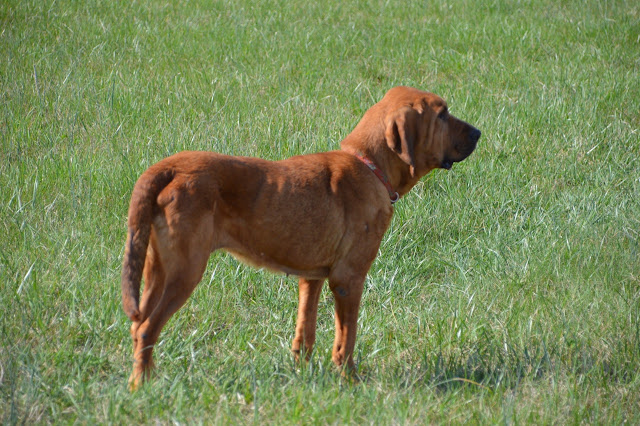 Checking the Intellicast radar I see our first storm is over by Effingham, IL. The forecast says we should expect strong thunderstorms in the afternoon with high winds. That is typical Spring weather here in 'the topics'.

With the world of sports kind of calming down to just one sport to follow, there is now enough time to attack the 'to do' list. It seems like it's a feeling I get every April but not until college basketball's Final Four is over, where I am motivated enough to get started again on annual house maintenance that needs to get done.

I'll work around the weather in the spring and then around the hottest temps in the summer. I had a list of 15 things to do a few years ago but I don't have that many different jobs to do this year. There are a couple that will take a week or so to complete. The time I pulled every weed by hand that was in my driveway made it and the fence line look really good ... I'll have to be pretty bored to do that project again.

That blue sky with sunshine has turned to overcast skies and there is now a feel of rain ... the hounds are telling me it's time for their lunch here in 'the tropics' of southern Indiana.
at April 05, 2017