The Hounds Are Loving This Weather 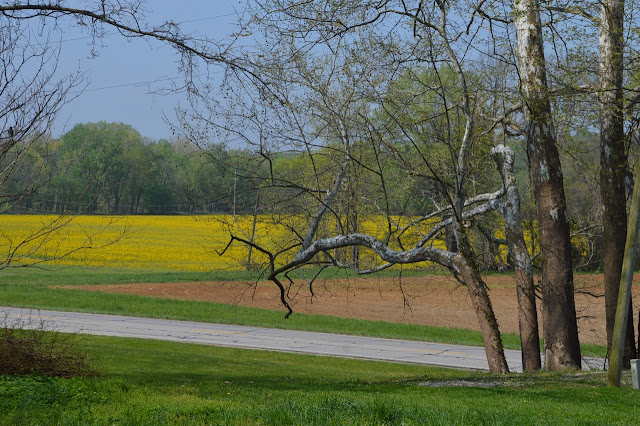 It was hot enough yesterday afternoon that I could feel the burn on the back of my neck as we did an afternoon walk. With Heidi still sleeping on the couch enjoying a breeze coming through the north living room window ... Sadie, Stella and I decided to enjoy the late afternoon sunshine.
As Stella walked slowly on the path I thought she was going to take another walk, but she stopped, turned to look at me, then slowly sat down and laid down for an afternoon nap in the middle of the field!!! 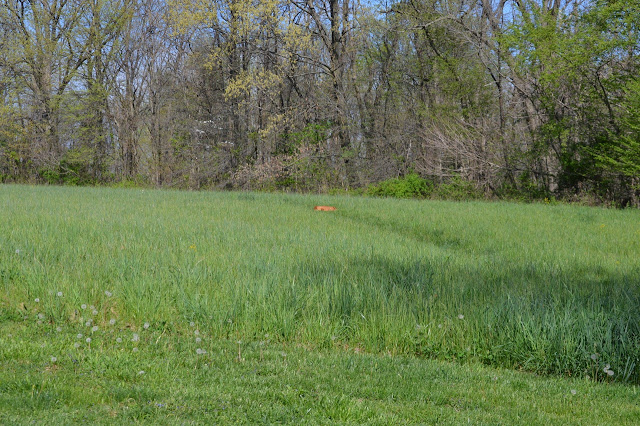 This lasted about 15 minutes before the sun beating down on her with enough heat that she woke up to move. She makes me laugh on a daily basis from something she does or did. 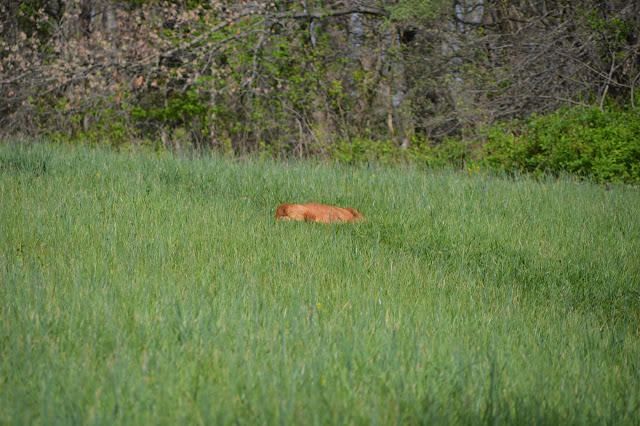 She sat up to think about her next move. 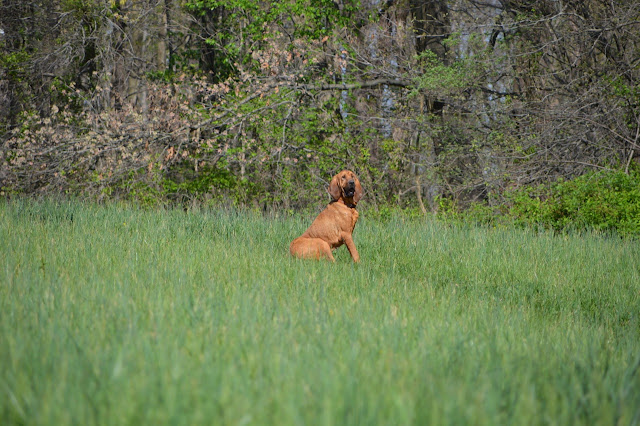 Sadie decided the heat was too much, for the first time this spring or year. She walked over to me so she could sit in the shade from the roof overhang. 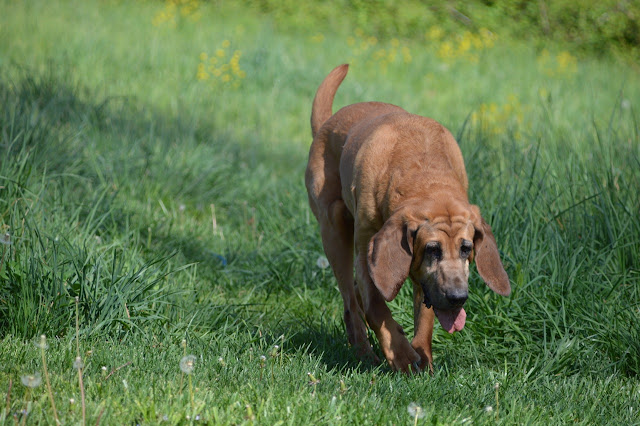 Stella did not walk too far before she realized that Sadie might have the right idea of getting out of the sunshine. She headed back to the house. 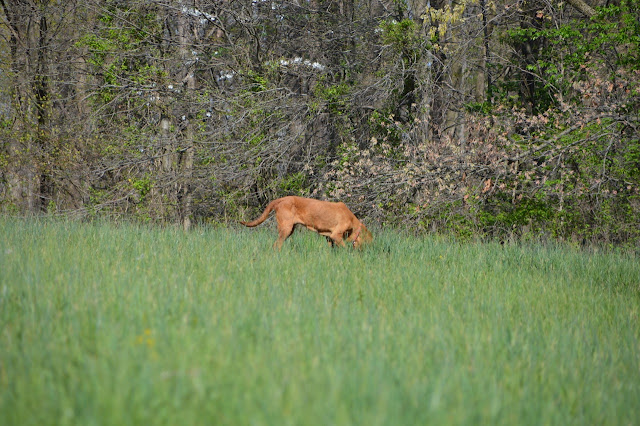 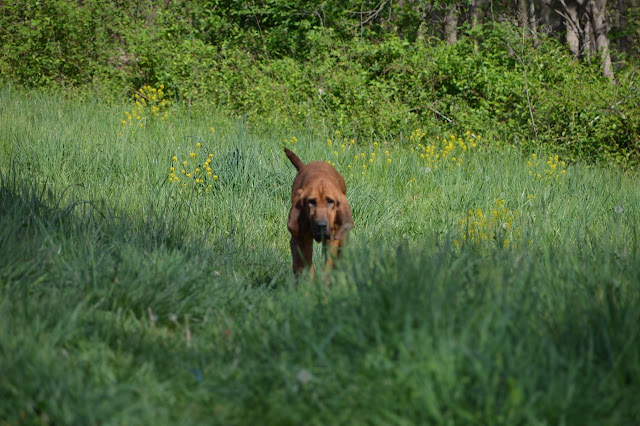 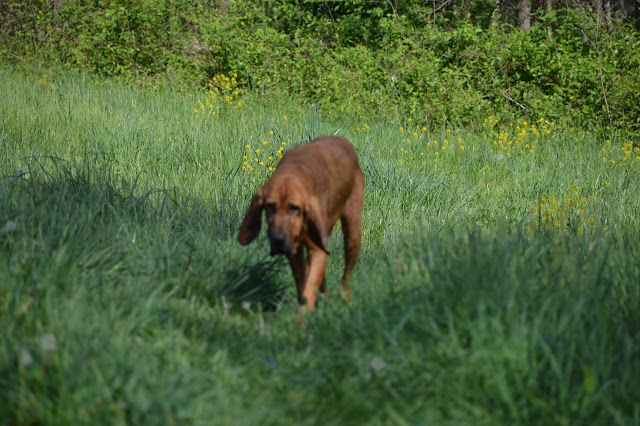 I was surprised that Sadie was actually laying in the yard. As I have said in the past, she rarely sits or lays in the yard but is always moving around smelling different scents. She has always had a hard time sitting still when she is outside. 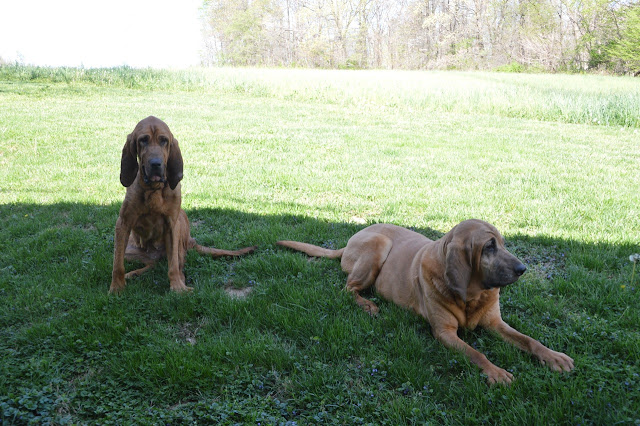 While sitting in the shade with the hounds, enjoying a glass of freshly brewed ice tea, I heard a large truck slowing down and it sounded as if it was coming down the country road instead of the highway.

From his load, it looks like they are dismantling the old steel bridge a few miles behind my house, not the one across the highway. With "rush hour" traffic on the highway I wondered how long he would sit there waiting to pull out onto the highway. It turned out to be less than a minute. 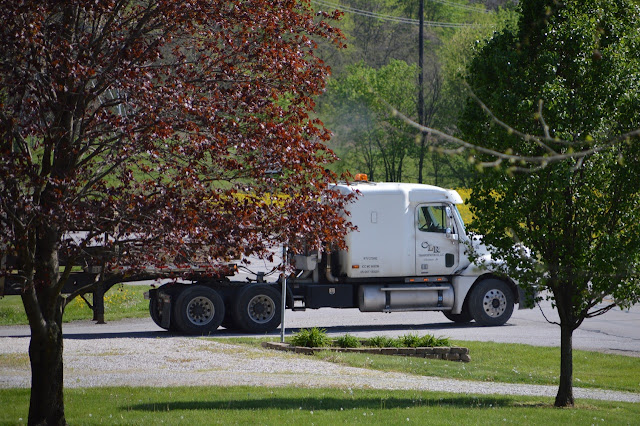 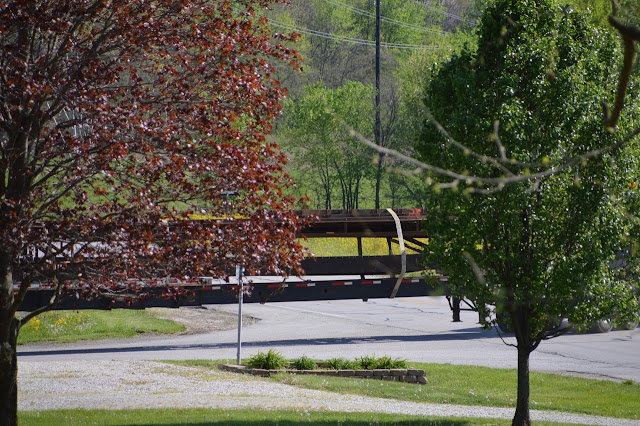 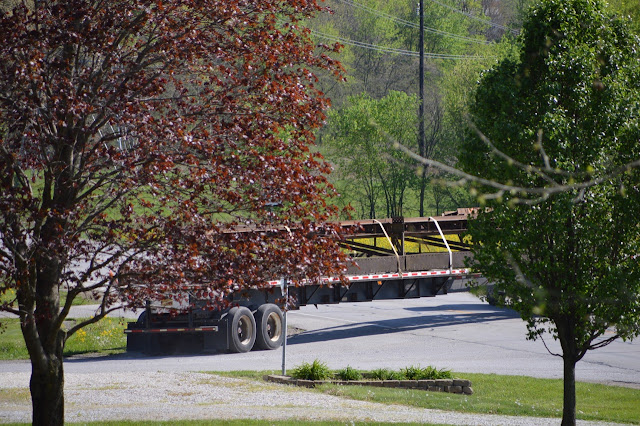 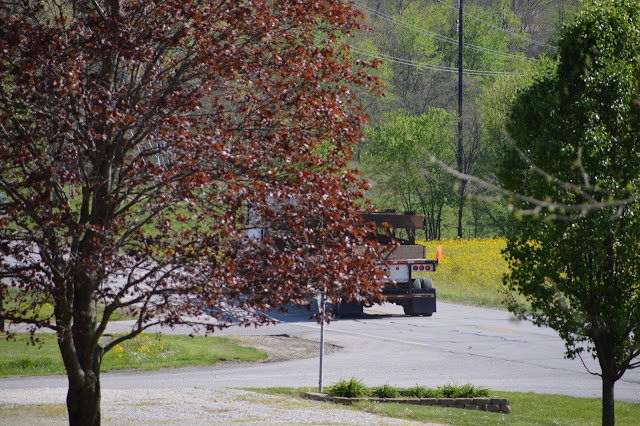 While I was taking pictures of the truck from my chair, Stella found her favorite spot in the backyard to take another short nap. She always has the same routine where she will lay there in deep thought, then flop over on the ground. 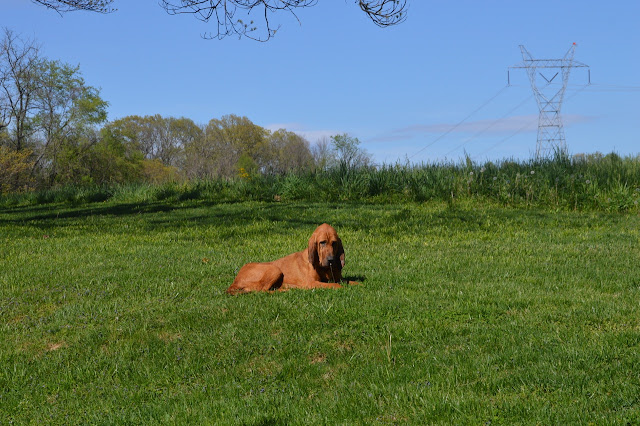 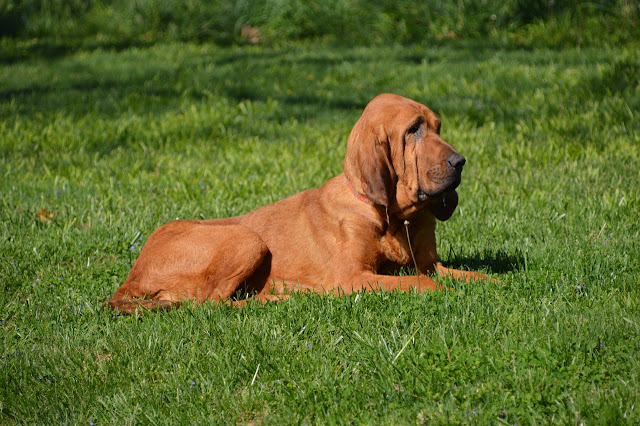 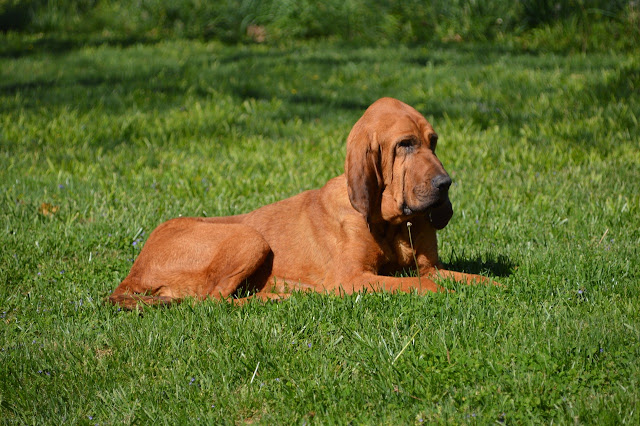 She loves sleeping in the sunshine. 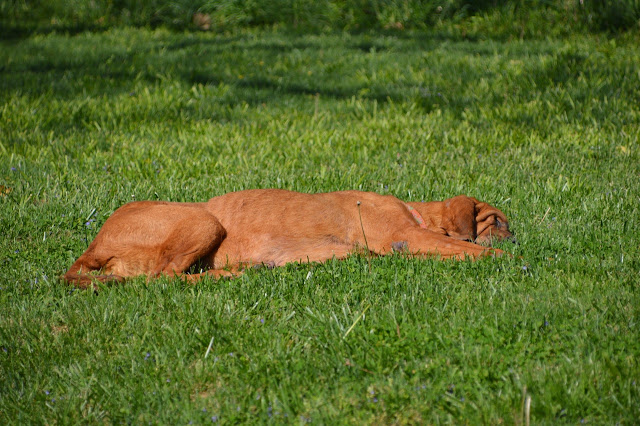 Maybe you can tell the last time I cut my yard I raised the mower blade up one notch which puts the grass cut at 2.5" - 3" tall. I think for the summer and overall health of my type of lawn, cutting it taller is better. 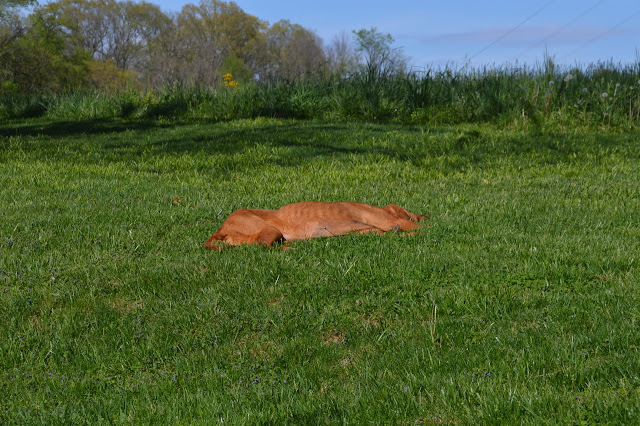 Sadie did not move during both of Stella's naps. There was a little breeze whipping around the house from the southwest. She sniffed the air, looked around but never got up until we went inside. 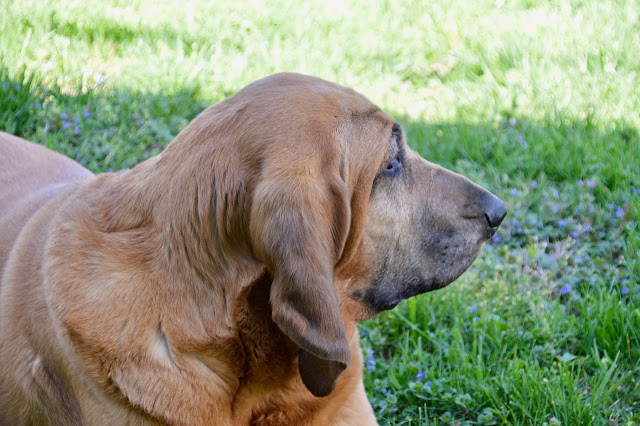 Finally Stella had enough of the hot temps and was ready to go back inside. I thought it was the perfect time to put the top down on the Z4 and head out for a 6pm drive. I had a new route I wanted to try. The nice thing was in the middle of the drive at a T intersection I changed my plans and turned left.

This put me a nice two lane highway with a lot of curves and hills through the country side. It ended up being about an hour loop back to the house.

One thing I have noticed since I cleaned my camera yesterday afternoon, that the pictures have regained their color. They look like the same quality I had a year ago and better than in the past few months.

I am still using the lens hood, but it might just be the lighting or the time of day. After looking at the pictures below from our Wednesday morning walk I am not sure lighting is the reason. None of the pictures in this post have been edited. 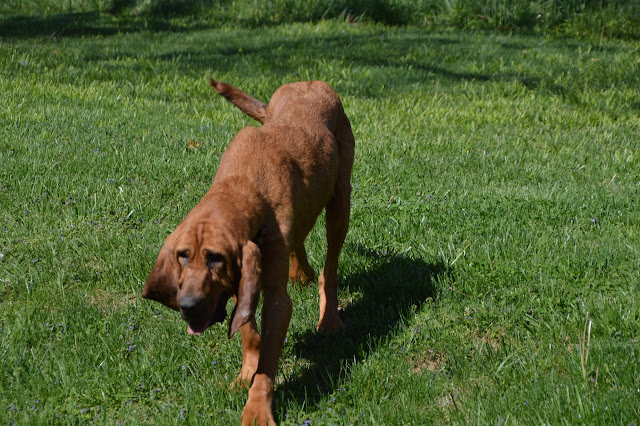 We started out on the walk a little later this morning. We woke up early but for some reason we are experiencing a little slower schedule today. I have a weird idea why Stella has been trotting a little more than normal plus keeping up on the walk on her own and never having to call her.

I have not been bringing the 6' standard leash with me, carried in my pocket in case it was needed. Before I would let her sniff the leash before putting it in my pocket. Could that be the reason she is back to walking the full distance without me having to call her? Recently she had spent a lot of time walking on the path as if she was on a leash. 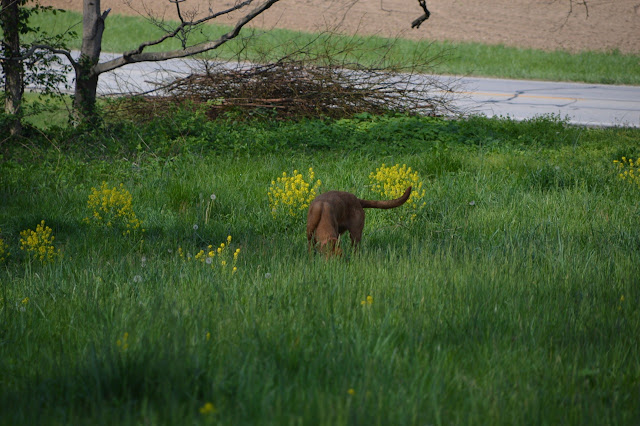 Sadie stayed near me more than roaming this morning so I didn't get a lot of pictures of her today. 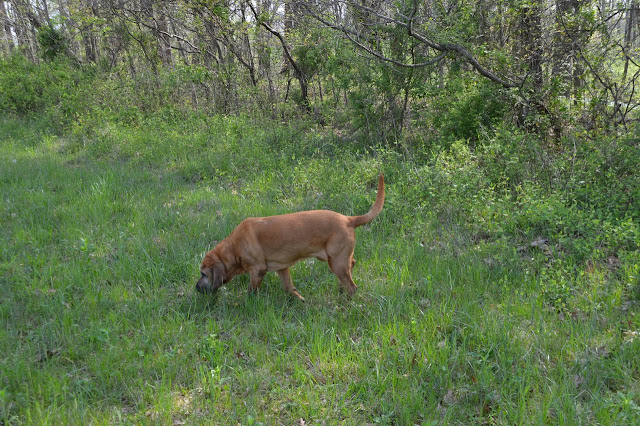 I didn't say a word and kept walking as Stella stayed behind us. It was nice to see her running as I turned to check on her. I hope to see her doing more of this from now on. 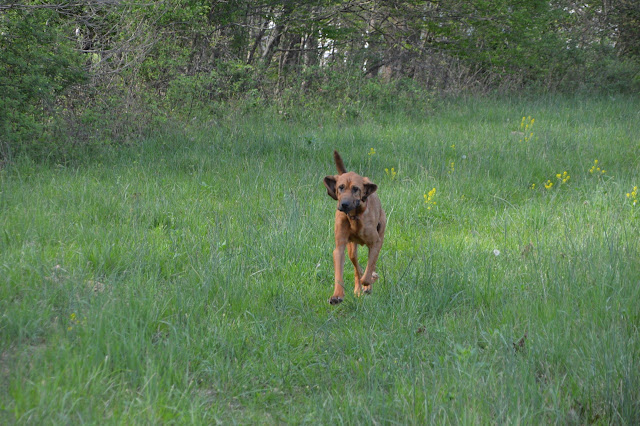 There was not a lot of intensity on this walk compared to yesterday morning. As always they each stop in the same places each morning. Stella eats grass in the same spot and they both follow the deer path. 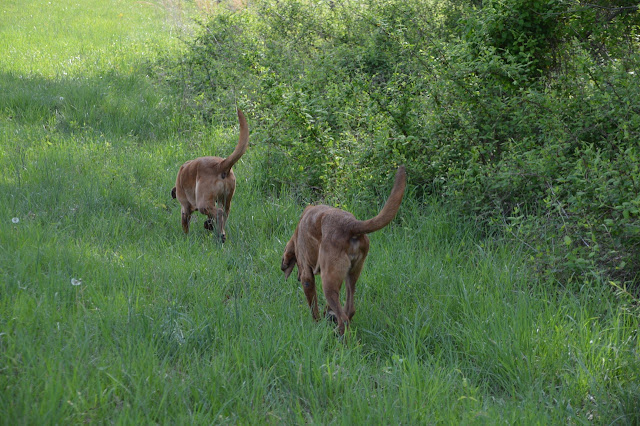 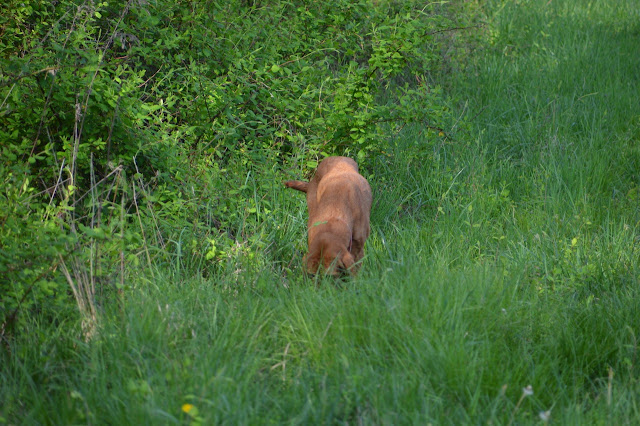 Stella thought she had made a breakaway heading to the far right corner without me seeing her. She made the mistake of glancing over at me when I yelled "over here" and once again she turned and headed toward Sadie and I. I just started using those two words in the last week or two and she has always responded to it. 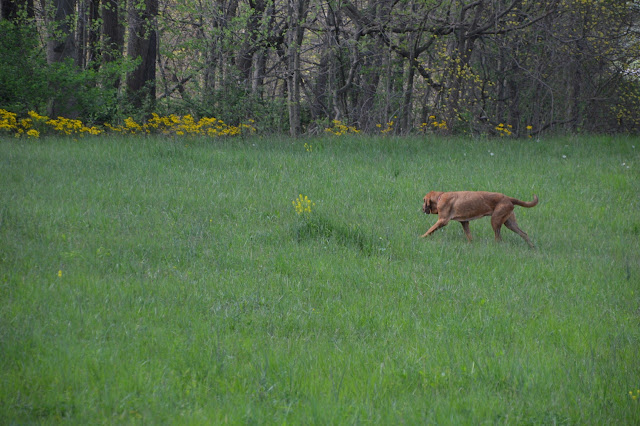 She never looks happy when she doesn't get to walk in the direction she was heading. 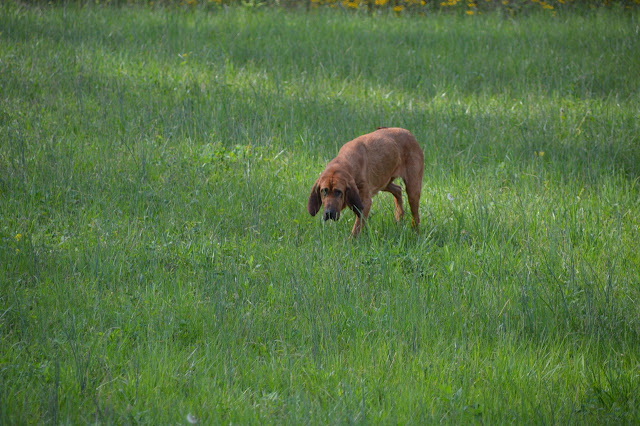 While Sadie walked to the left of me, never veering off the path, Stella followed her own pace behind us but by the time the walk ended she had caught up with Sadie. 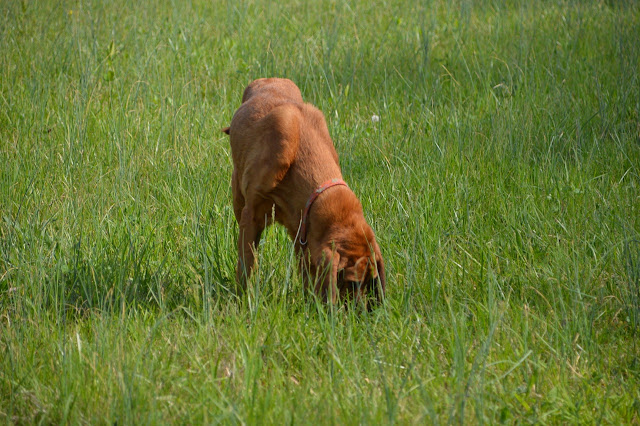 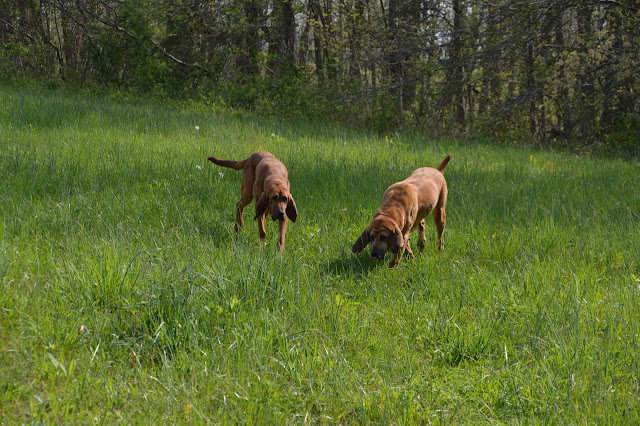 Not much planned for today. After the effort clearing the bank last week I have seemed to have lost all of my motivation in attacking my 'to do' list. By the time I take a couple of walks, shoot around 100 pictures and check them for edits, write a blog post and spend some time outside just hanging out with the hounds ... the day is over.

Time seems to be flying faster with the warm spring weather.

I did go through all of the pictures I took yesterday of some vacant closed businesses in town and the steel bridge across the highway. Counting the pictures of the hounds I took 157 pictures yesterday.

When I was at the landscaping business yesterday looking at some things, Ted told me all of that yellow in the field was "wild mustard flowers". He also showed me some stump killer that I am going to paint on all of the saplings I cut last week. He thinks this solution will keep them from growing. I'll then cover the ground of the entire bank with some seed, along with the wild ragweed that grows every year.

I need to look in the attic and in my house crawlspace but still dread doing it. Maybe I'll get under there later this afternoon. I need to back the Z4 out so I can open the ceiling in the carport, letting the built in ladder drop so I can get up in the attic to have a look around.

If I do nothing else today ... I will wash the Z4 this afternoon.

The hounds are loving the weather right now in 'the tropics' of southern Indiana.
at April 19, 2017