Stella Has A Bounce In Her Step 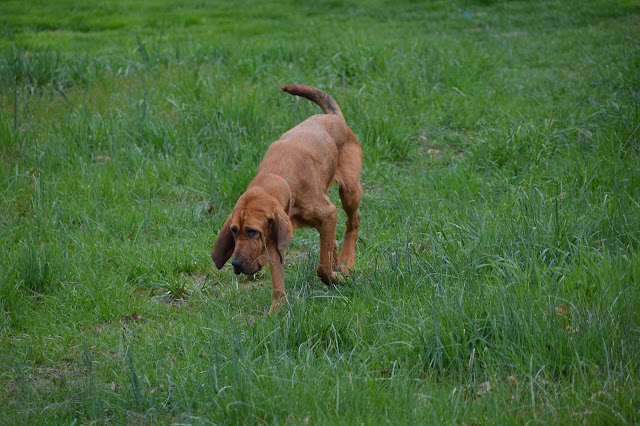 I already knew when I posted my last blog post only 12 hours before I wrote this one, that it was going to be a cold, wet and windy day. Rain was pounding against the bedroom windows as I opened my eyes ... only seeing Sadie standing looking straight into my face. Luckily no drool was involved.

When she gets on the bed and stands over you until you wake up, it's either really late or she really has to go outside. Since she and Stella made their last trip outside past midnight ... I knew it must be late.  (9:30am) 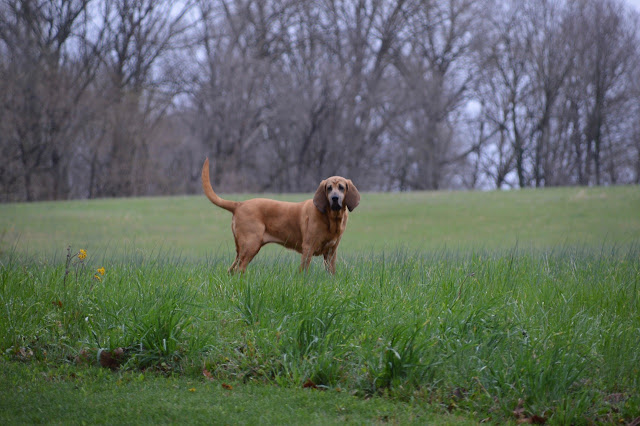 I still knew there might be a chance to get a walk in. If that were the case I would need to be wearing my waterproof hiking boots, along with jeans this morning. When Wunderground was telling me it was 45° and felt like 37° ... I wasn't sure a hound walk would take place. 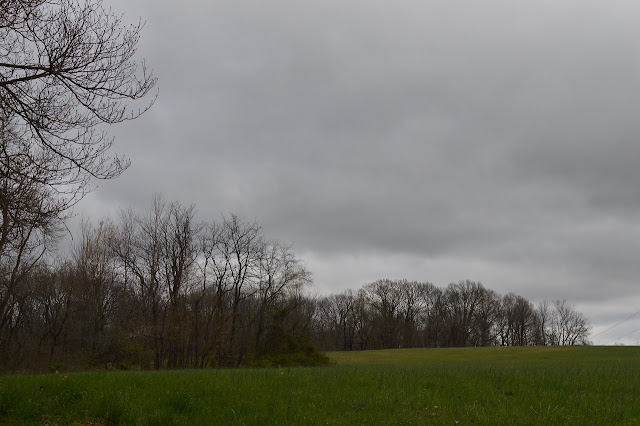 Throw in some really wet ground and high cold winds from the NW, I was planning only a quick trip outside for Sadie and Stella. Yet, Sadie had other plans ... we were walking, get the camera.

When you are not more than 30' into the field and the ground looks like this, you know it's going to be soggier the further you get back into the field. Water came up over the edges of my soles and I could hear each step Sadie took. 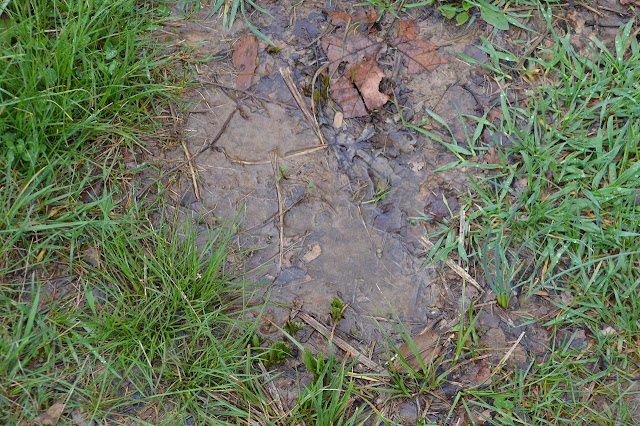 With Stella's stomach growling this morning as I drank my two cups of coffee and read the internet, she started her walk by stopping at the edge of the yard to eat some nice green grass that is growing fast in the field.

I was almost shocked at what I was seeing ... but really really happy ... to see her running to catch up to us. I had just blogged yesterday I was getting worried because I couldn't remember the last time Stella ran in the field. 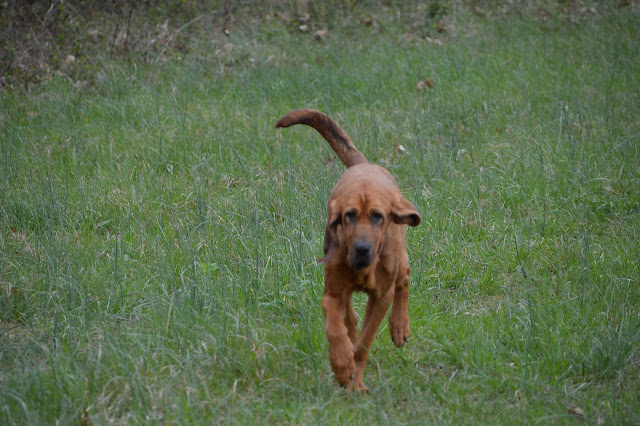 I wonder if she feels better now that I found her favorite bone to chew on ... the Nyla Bone ... found under Sadie's dog bed right smack in the center. 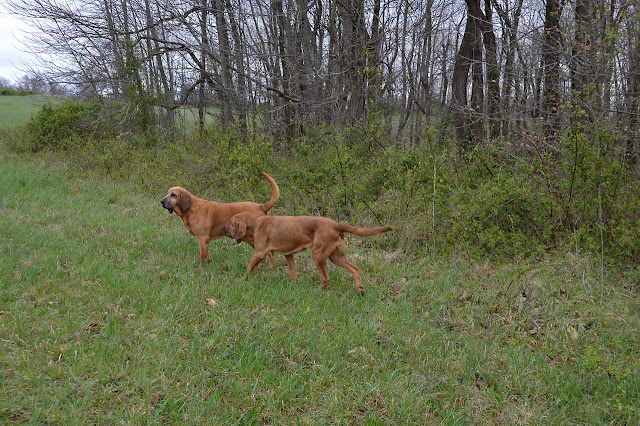 With strong winds always brings stronger scents. I couldn't see anything in the direction they were staring. It was cold enough with the winds from the NW that I wasn't thrilled about the possibility of sprinting after them as they chased whatever they saw. They then turned and headed in the right direction. 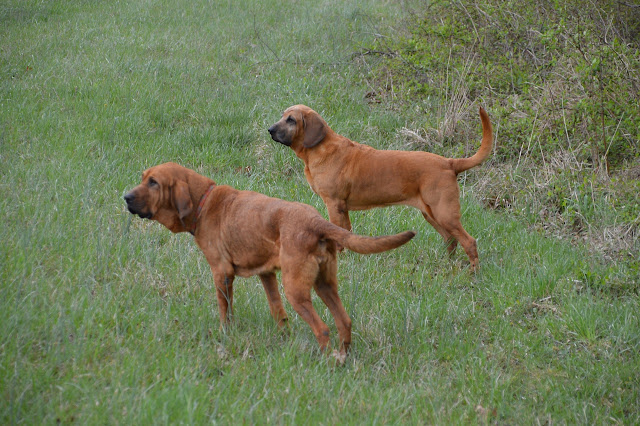 Stella was pretty sure the deer came from this direction. There are a lot of bushes with sharp thorns in that area. It never seems to bother the bloodhounds as they charge right through them. 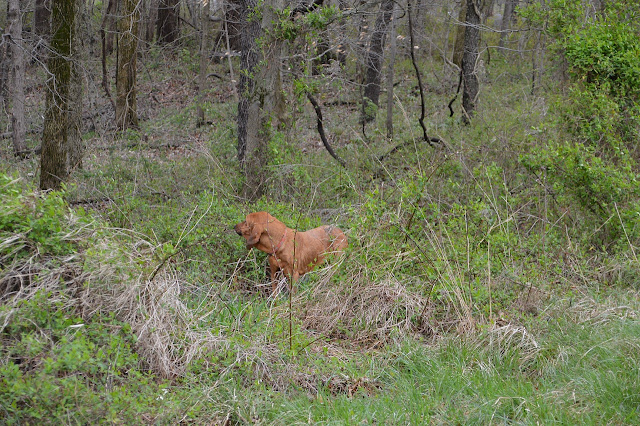 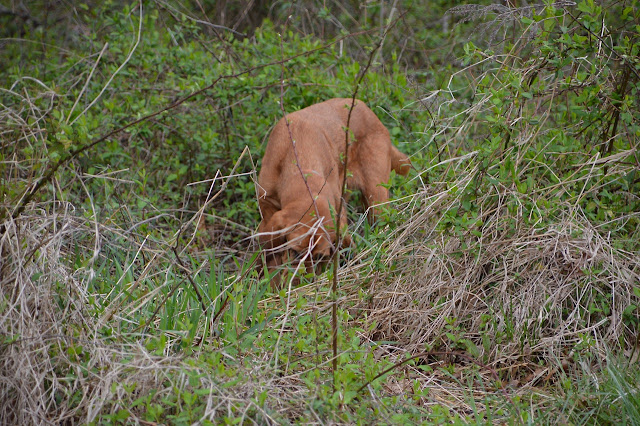 As always, the further we walk into the field the wetter it got. Even with a slight increase in elevation, it is always wetter near the back of the field. 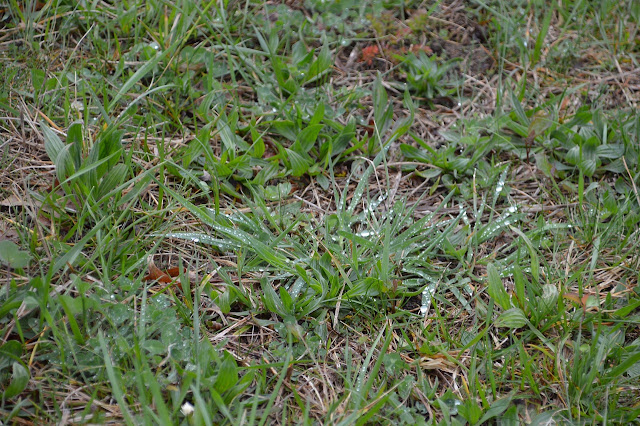 If you look closely you can see standing water inside that hole of mud. Is that made by a snake or something else? 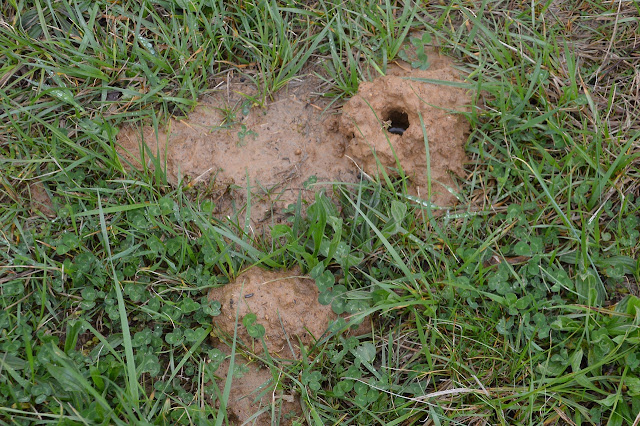 With the winds getting stronger, Stella fought the headwind ... Sadie was already far in front of us. 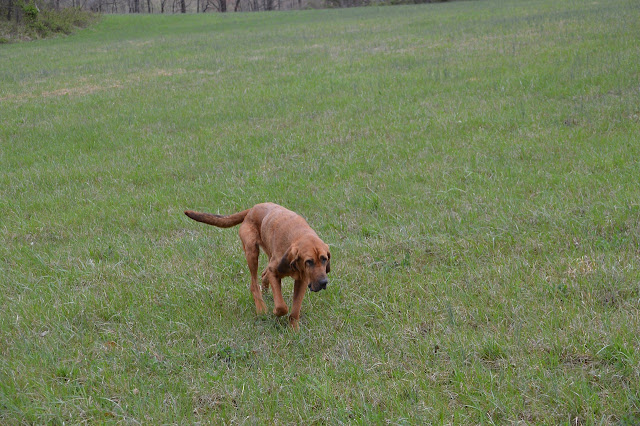 More of that strong deer scent had Stella not moving. I am almost positive that she was wishing and hoping that she could take off into the 'no fly zone' and find out just where that strong scent was coming from.

I let her stand there for a while to satisfy her nose and curiosity, then called her name. She turned and headed my way in a slight trot. 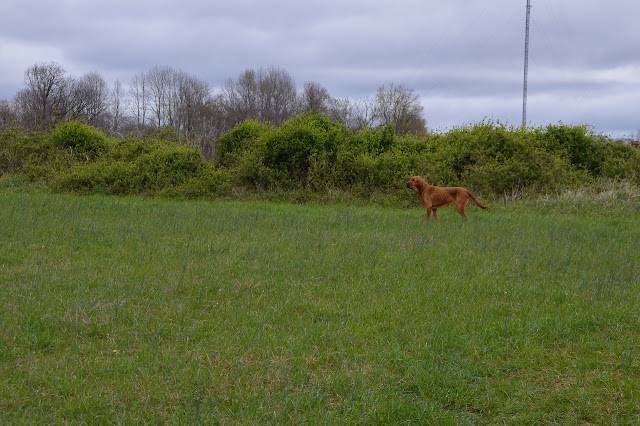 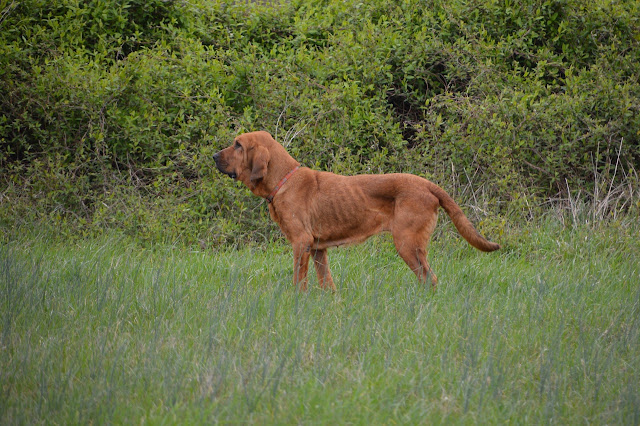 Toward the last part of the walk, they both were veering toward the neighbor's house. That large blonde cat is probably spending the day in that wooded area and with the wind coming from that direction, the bloodhounds were more than curious. 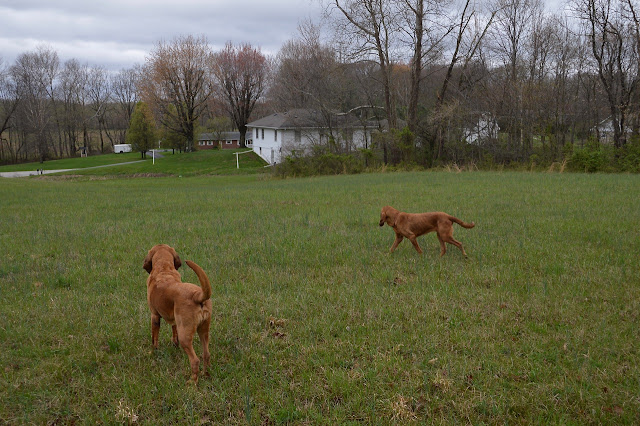 This was the 2nd time today that Stella took off running while she followed Sadie. It's been a long time since she has done that. 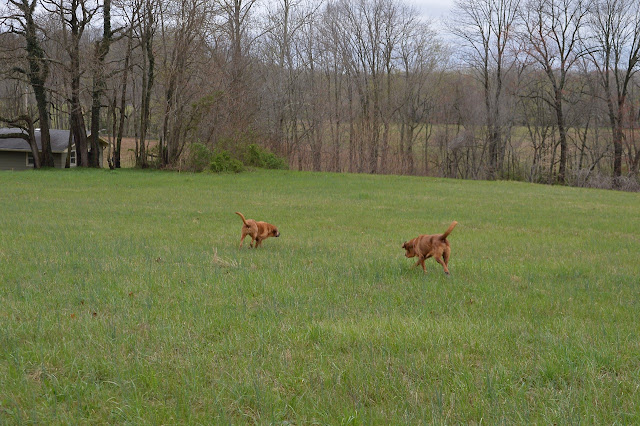 I am not sure what caused the burst of energy for Sadie but there was something in the middle of the field they had to check out. Once that happened Sadie ran back to me while Stella decided to take her own way home by heading to the corner of the property. 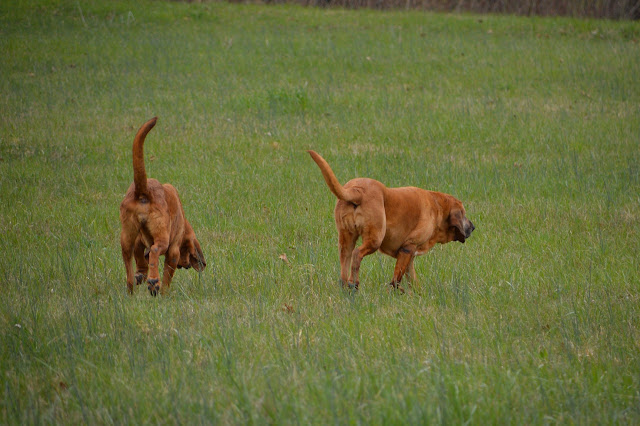 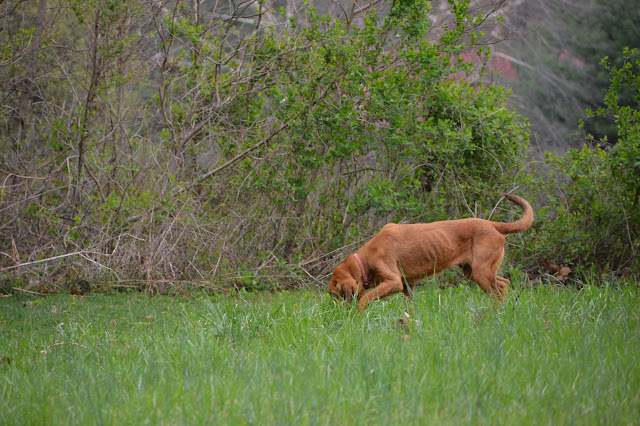 She had just entered the yard when she when from exploring the ground to jumping away. I didn't hear anything loud to make her jump. No leaves are around to fall to spook her but something scared her enough to turn back and look. 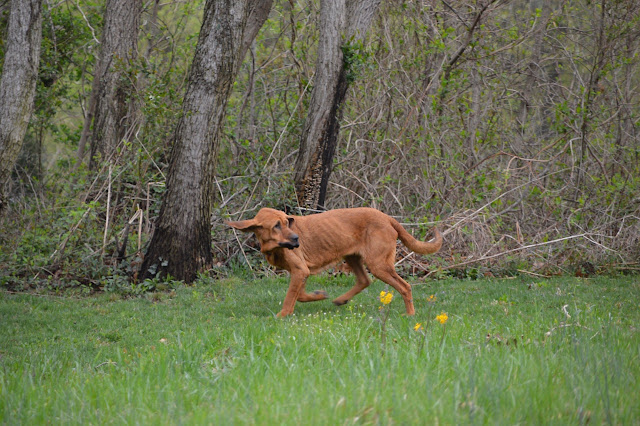 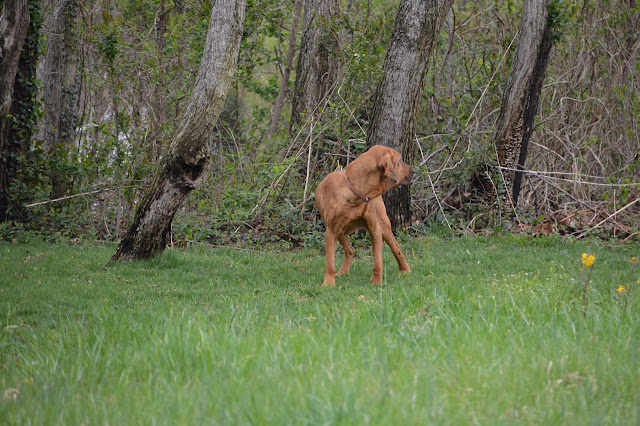 When Sadie saw that she had no choice but to sprint over to Stella to check it out. There had to be something she was missing. Or at the same time she was just trying to get Stella back to the house and thought she needed an escort. 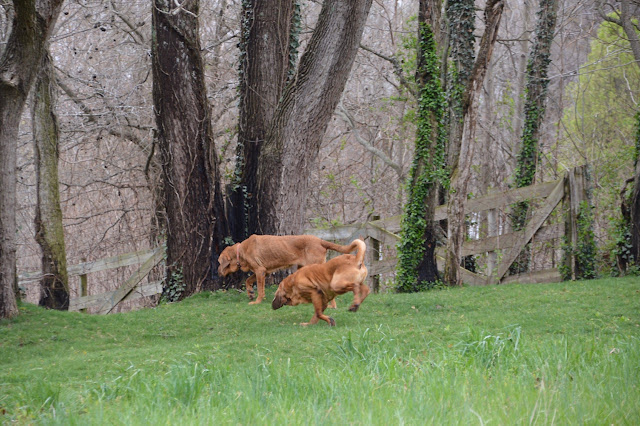 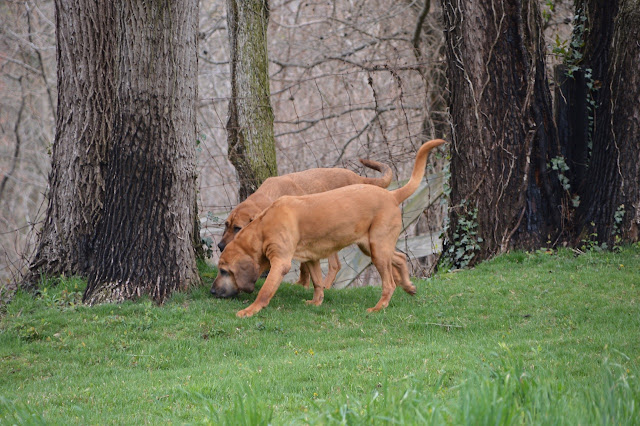 I can handle one cold day in the spring when I know starting tomorrow we are back into the 60's and 70's as far as the forecast goes ... what ten days?

In the meantime we will be staying inside today. My team the Cincinnati Reds are playing an early afternoon game, like right now, along with a few other teams. With the Directv bribing program I am getting a week of free MLB Extra Innings showing a lot of ballgames at the same time. They tell me I can buy that for small payments of $52 for the next 4 months.

Not going to happen.

I love baseball but I get enough games for free with the program package I have.

There is a pitcher today starting his first MLB game ever ... his first name is really "Rookie" and is from Holly Ridge, NC (1,268 pop and 1.4 square miles) ... sounds like an amazing storyline for him. With bad weather and a team with low expectations as they enter their 2nd year of rebuilding ... a small crowd is expected. I saw they were offering field level tickets for $9, which is amazing for a professional baseball game.

I had to pass since it is not only a 3 hour 15 minute drive one way but I've never a great fan of 45° baseball. The announcer just said it's in the 30's and he thinks he is seeing sleet. In 1977 on April 6th, it snowed 4" in Cincinnati. They cleared the field and played a team use to playing baseball in the snow ... the Padres of San Diego.

Seems strange to go from not blogging in one day to two blogs posts in one day.