Hounds Get A 2nd Walk In On Wednesday 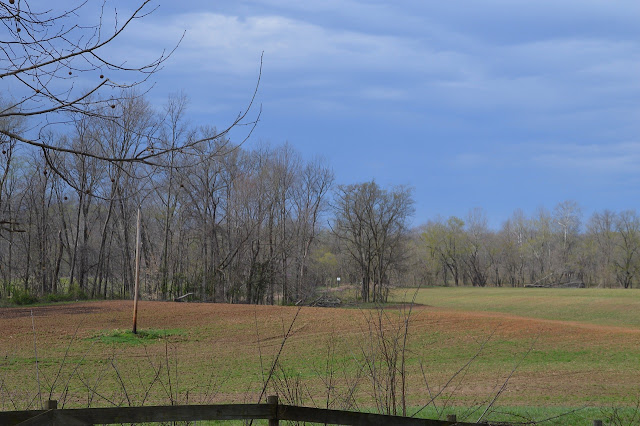 From the way it looked on the radar, it was going to be close but possible for a hound walk before the storms came. We figured if the local electric crew were out trimming tree limbs before the storm, then it was okay for us. 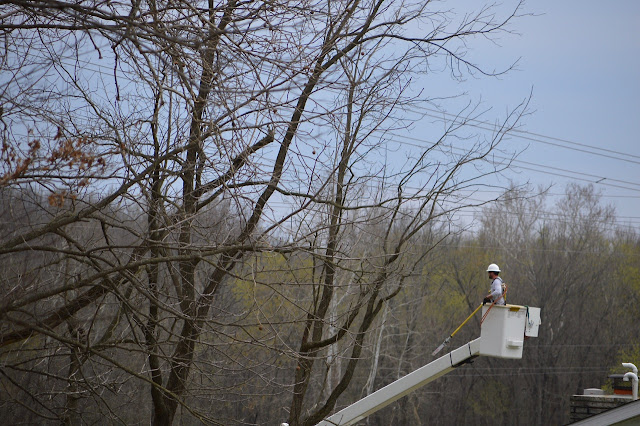 Stella was so excited about the possibilities that she hung one of her best drools ever. It wasn't as long as her best one but as far as thickness, and stability I think it ranked right up there with gorilla glue. 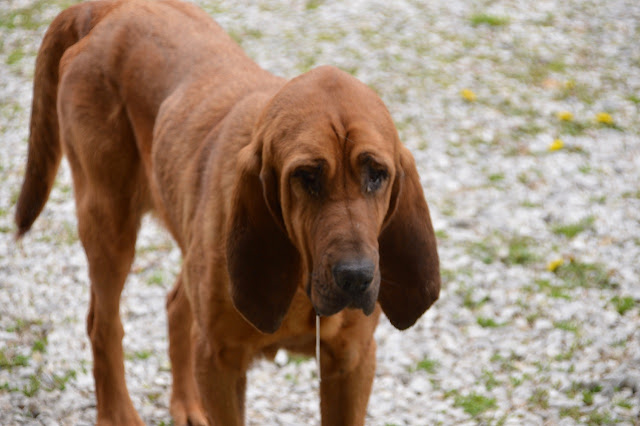 So why is this blog post showing up at an odd time of day?  It's 12:40am as I write this ... I'm wide awake, nothing to do and found some pictures I took this afternoon that I forgot to download into the computer.

By the time we left you could see that we were going to cut it pretty close before it would start raining. 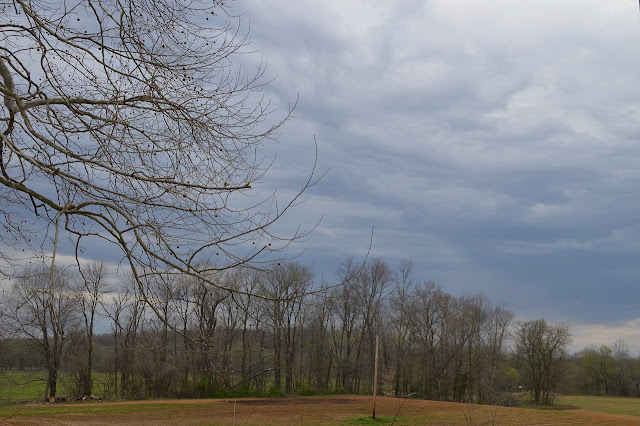 The walk started pretty good, normal, that is until Stella heard all of the men cutting trees. Then she was curious enough to not only listen but took a couple of steps her their direction. When I called her name, she changed her mind and started heading our way. 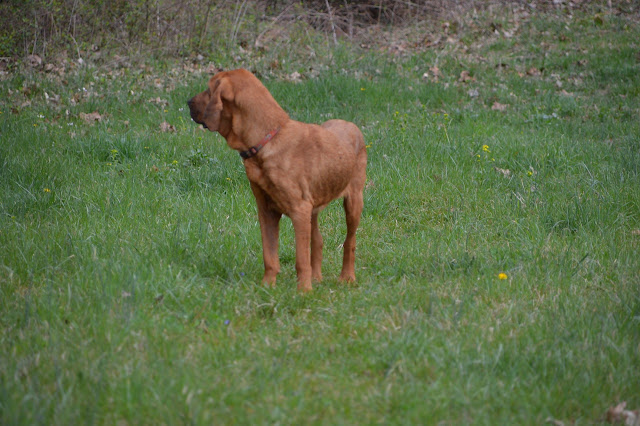 Those storms west of us this morning did their normal split ... one headed along I-70 and the other followed the Ohio River. That happens the majority of the time, even during winter snow storms. So all of the weather was traveling in a northeast direction at a high rate of speed. 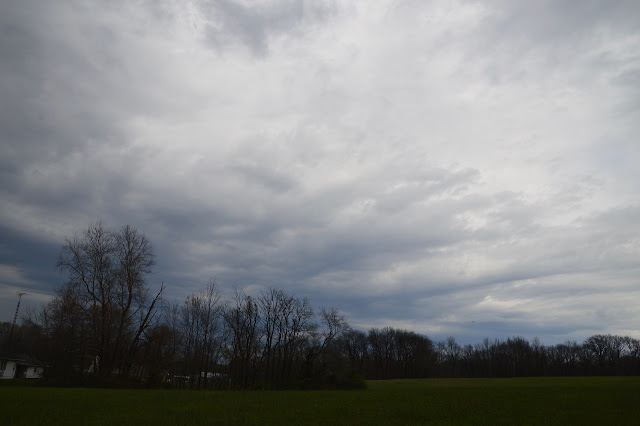 Weather, wind or possible rain didn't bother either hound. they were not going to change their pace and I think you can tell by the 2nd picture just how fast they were walking ... slow and slower. 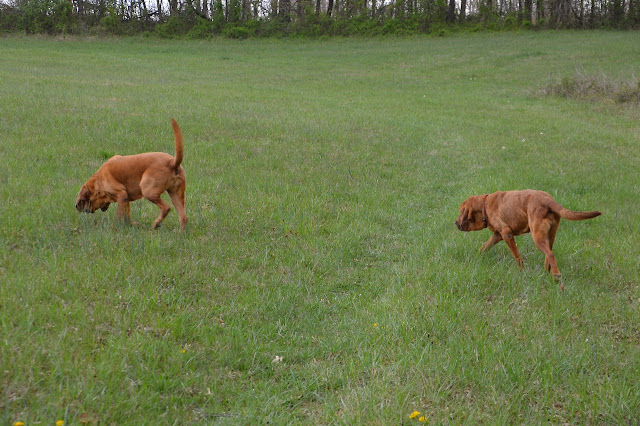 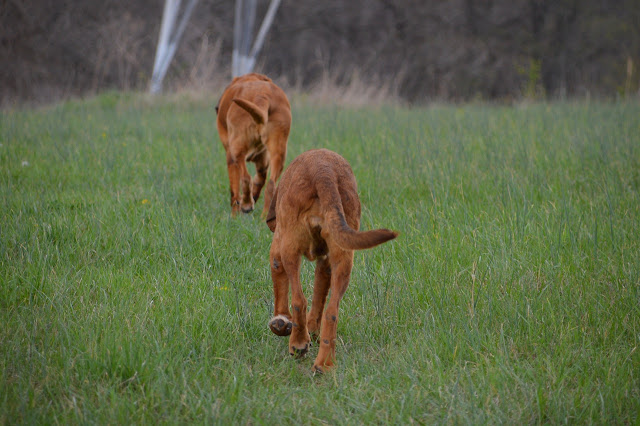 When I made the turn home, Stella was following me 6'  behind me, so I forgot about checking her. The next time I looked she had gone way off the path and was interested in something else. To far away to look for the cat but something had her interest. My neighbor may have been baking pies. 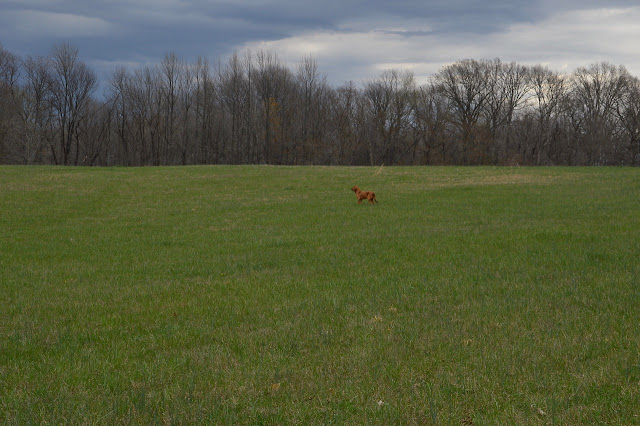 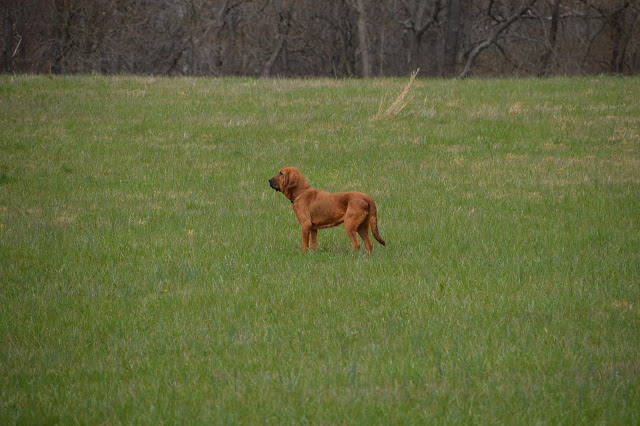 Once she didn't respond to me calling her name, loud enough for her to turn and look at me ... I told Sadie "go get Stella" and she took off running. 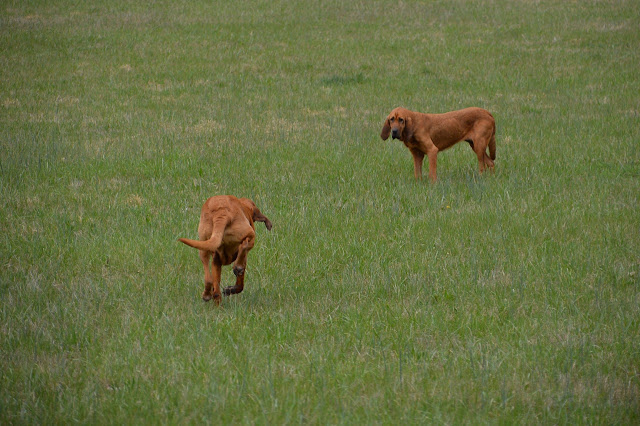 She didn't touch noses this time but did an abrupt turn within a foot of Stella ... she slowly started walking our direction. 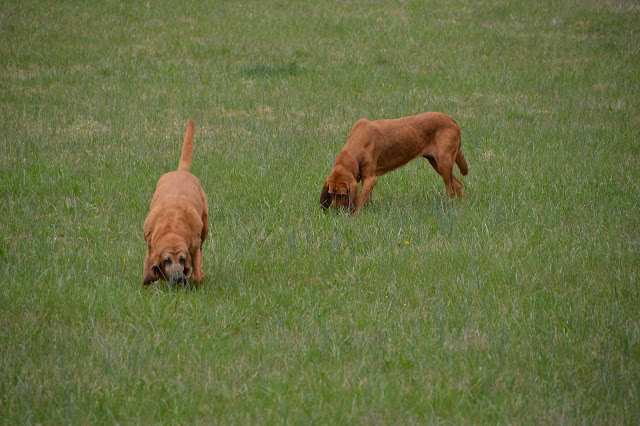 About the time they were almost to me, I was sure I felt a drop of rain. I was positive when I felt more than one drop of rain. So when Stella didn't move, I ran over to attach the 6' leash so we could run home before it started to pour. 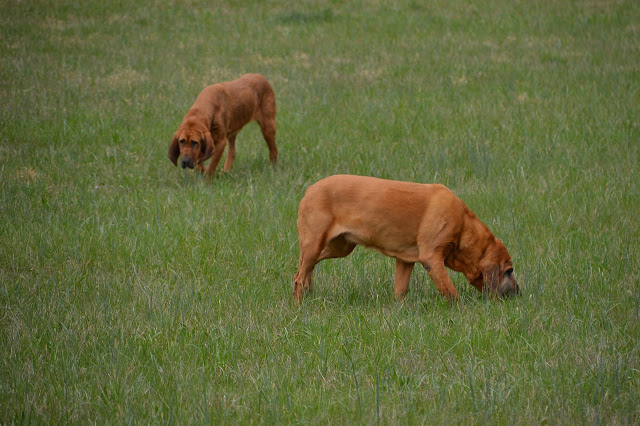 I am not sure how to take it ... but she didn't run even with me setting the pace and Sadie running next to me. She was in a fast trot but would not run. I did not notice her limping, nor hear any king of yelp from her. Is she getting that lazy or is something wrong with her?

About the time we had a step on the carport floor, the rains came. I had made it just in time before my camera would have been soaked with rain. I spent the next few hours playing Mahjong while watching the hard rain out the window.

The great news wasn't that the rain stopped but a text I received from the local company that installed my Exede Satellite service in June 2014. As of April 1 my area had new options ... faster download speed, more data per month and lest money per month.

I called within a minute to set up an appoint for next week where they will come put and put on a new transponder on the dish, along with replacing the modem with the latest technology. The router is built into the modem, so I'll end up with one box instead of two.

My current download speed is consistently between 12-15Mbps and the web pages load almost instantly. I don't watch ballgames or movies on my computer so I guess I'll not be able to take the real advantage of more speed but it will still be nice to have.

The 20Gigs of data per month will be more than enough for me. I have averaged a little more than 14Gb per month for the past 2 years and 10 months of service.

Well it sounds like the rain has stopped, the winds have died down and all of the hounds are passed out cold for the night. I am now tired enough to call it a night and get some sleep.

There was a LOT of rain tonight in 'the tropics' of southern Indiana.
at April 06, 2017