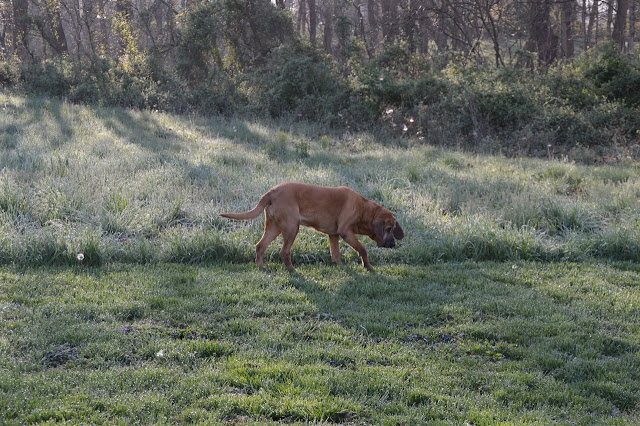 We were up early enough to see the dew still on the grass in the field and backyard. It's amazing to see how much of the field grass has grown just in the past few days. With the temps reaching the 70's this afternoon, Stella will finally get a bath with dog shampoo that is focused on relieving itching. 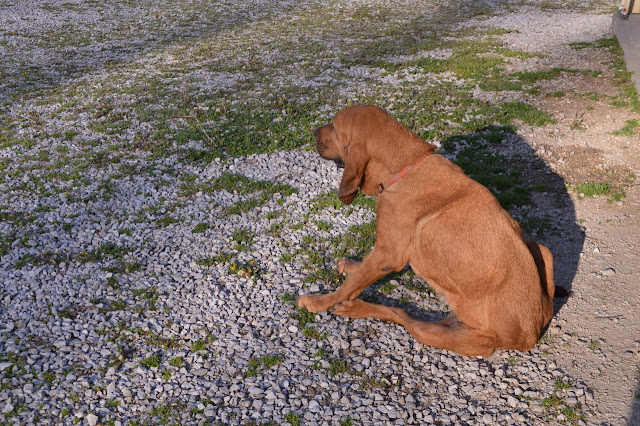 We had our morning walk at 10:30am. All of these pictures are from that time. I am still using the lens hood and making zero edits on any of the pictures. Instead of narrating the walk, I'll talk about my experience with the new (to me) HughesNet Gen5 satellite internet I had installed yesterday. 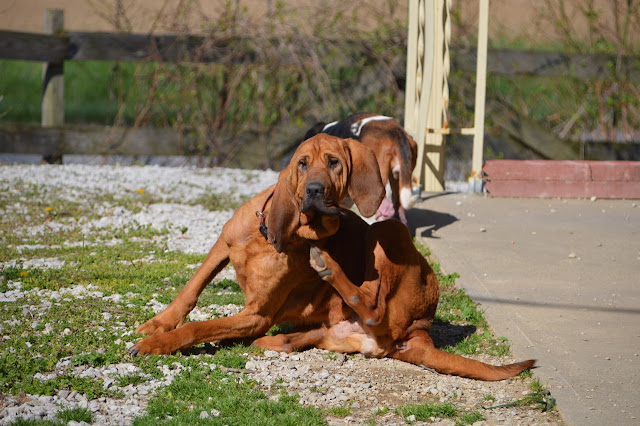 Some readers like myself live in rural areas and may need internet service that is faster and affordable. I've had this service for 21 hours and have found a couple of more good surprises as a new customer.

Before I start I will say right up front, the speeds are way faster than advertised or were certified by the FAA. I have seen a distinct difference in the speed of loading web pages and uploading over 100 photos last night into Google Photos and Flickr. I was happy with my Exede service and thought it was fast ... but this stuff right now is 'crazy' fast. 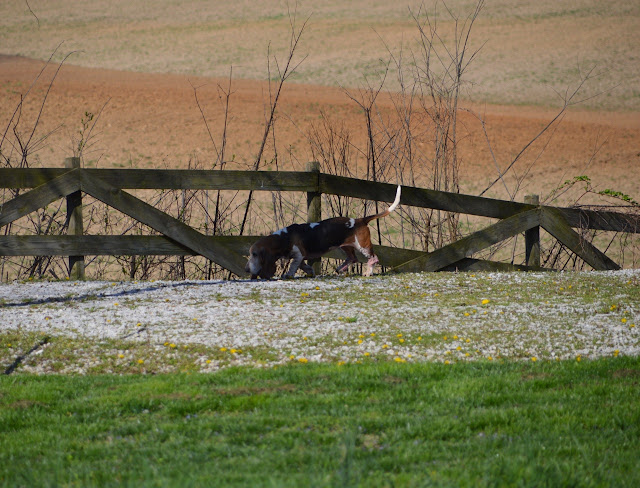 One new surprise this morning is I have free data for the first 20 days of service. I called customer service this morning because their data tracker was showing I had used zero data, where my iMac's Activity Monitor showed I had used 1Gig of data by midnight last night.

So I had to call to see what was up. She told me they give me 20 days of free data so I can get all of the updates downloaded, new apps or software downloaded, movies etc ... without using my data to 'get things set up'. 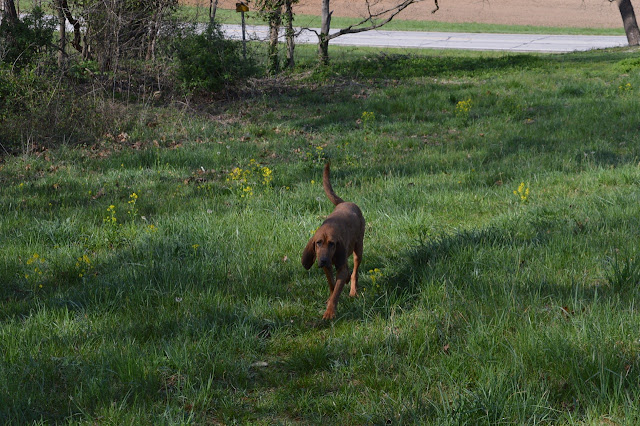 Last week I was told by the local distributor, I'd get 20Gb of data per month, speeds of 25Mbps and uploads at 3Mbps all for $67 after tax. There was no installation charges. Their modem had the wifi router built in, so there would be only one box. He did tell me though they were getting consistent download speeds of 45-48Mbps instead of 25Mbps.

Those speeds have checked out and have not changed since my install yesterday afternoon. I am also getting those same speeds on my iPhone and iPad Mini using the wifi to my modem. 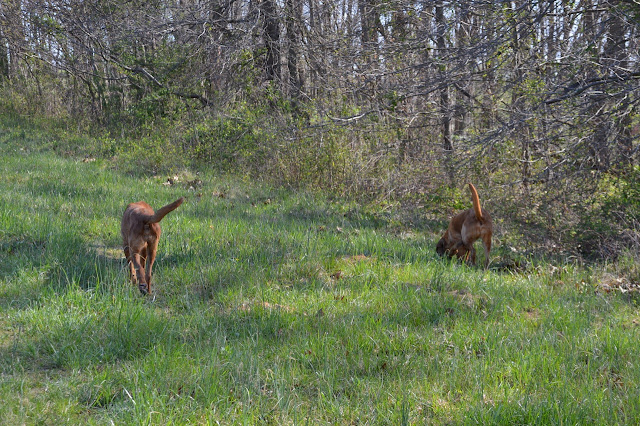 The $67 per month pricing includes the $20 equipment rental for the first 12 months of the 24 month contract. It will be back in the $80's after 12 months, which is what I was paying Excede AFTER a monthly $20 discount. For that ~$80 I'll still get faster speeds and more data.

As far as data, I forgot to mention I get an additional 50Gb per month between the hours of 2am-8am. I will most likely be up after 2am to use it before I am up at 6am to use it for 2 hours. 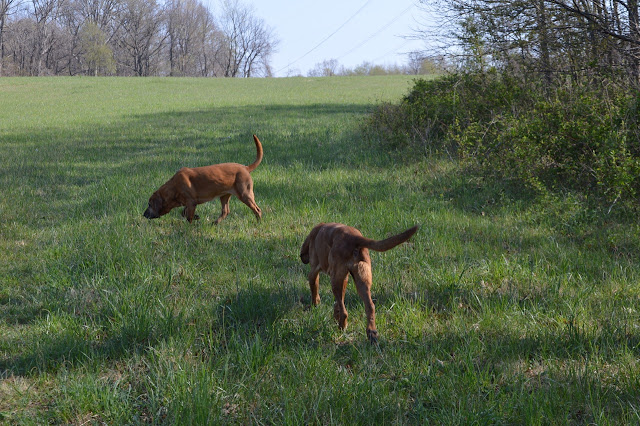 Hughes launched their latest satellite last month, March 16. It covers all of the USA, more area and Alaska. For those readers that have read reviews about satellite internet, take those negative reviews from complaining customers with a 'grain of salt'. Before I decided to install Exede in June 2014 I read a lot of reviews from different websites. Some were scary, but in my location I had no other choice for internet service. 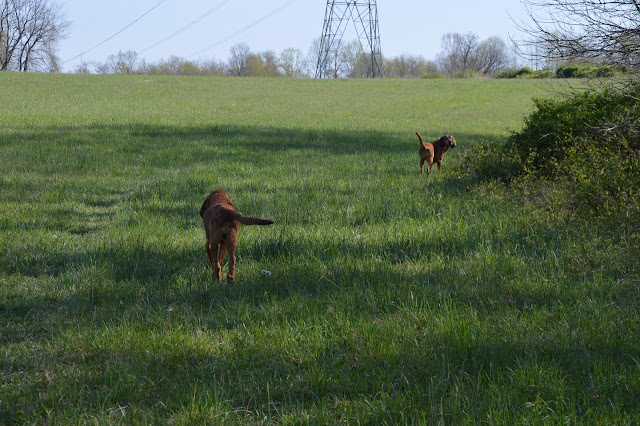 After reading some of the Exede reviews you would have wondered how they ever stayed in business if they were that bad. Yet, my reliable source for almost everything electronics, or computers ... CNET ... had good reviews.

I found it to be very very reliable, even in heavy thunderstorms or high winds. My internet signal rarely dropped offline and when it did, it was never longer than 30 minute if that long. Speeds were consistent at 12Mbps. Exede's customer services was always helpful and knew what they were talking about. At least from the phone conversations I had with them. 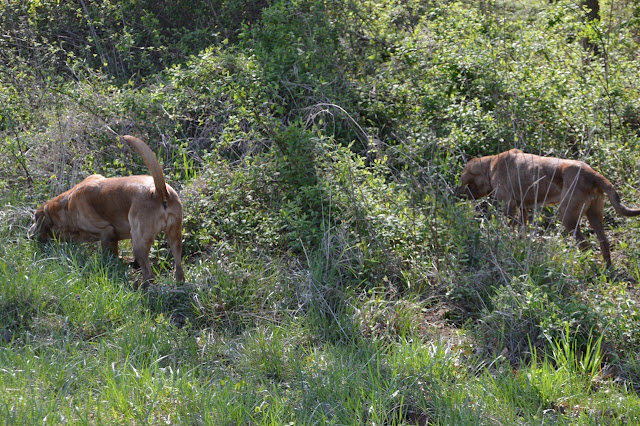 With the word getting out to the public about the new HughesNet Gen5 system, I expect my speeds to decrease over time as more people sign up for their service. Yet, it would take a lot of people using their internet service to decrease the speeds in half to 20Mbps or so. 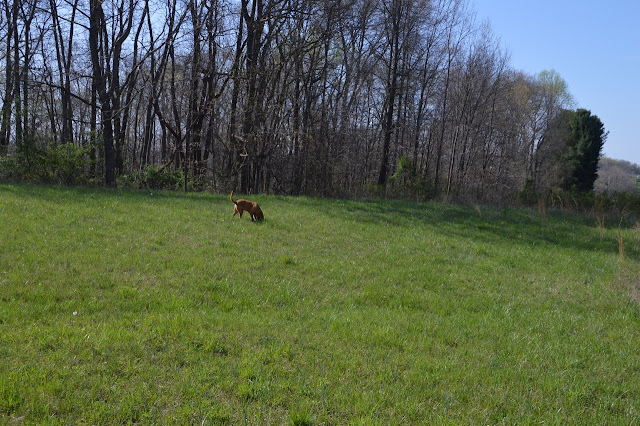 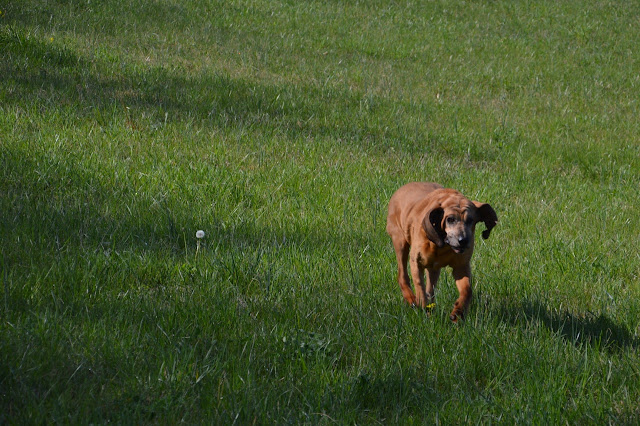 I am also going to call my Directv technical customer service to get a better understanding of downloading movies in their "on demand" program. I am not sure if the data is used only when the huge library file is downloaded or as each movie is watch, or both. I know 3 years ago when I connected my DVR box to my wifi it was sucking data like water to download Directv's large library of movies. 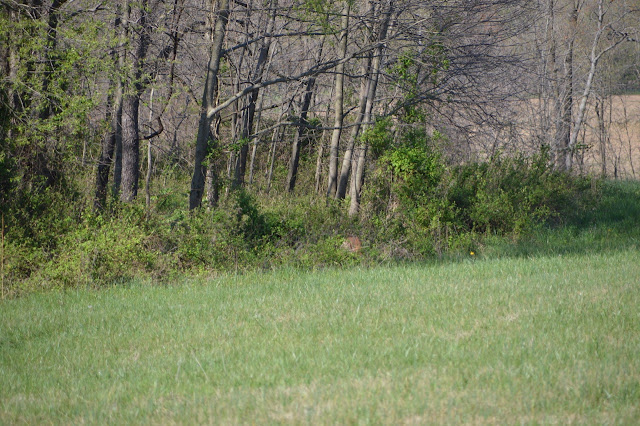 For those that travel or live in an RV, I am not sure if HughesNet can travel with you like Directv can. I have not called to ask them about that. I do know for sure that Exede satellite service was not mobile. 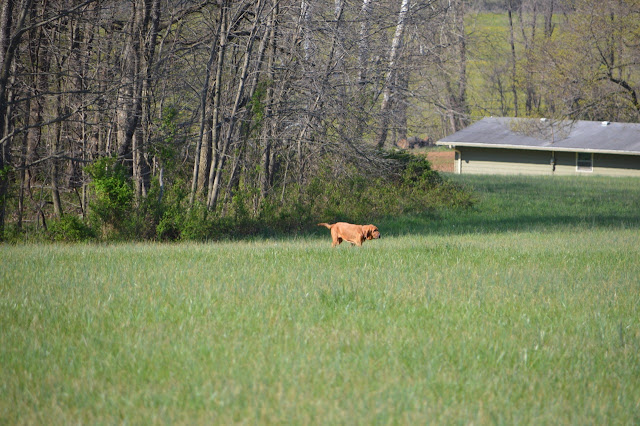 I can't think of anything else to tell you about the new internet service I have. I am glad I decided to make the change and very happy with the performance of the new system. I am sure about the time I post this, I'll remember something I forgot to say. You might want to check back for any updates, which I will type anything I remember later in a color of crimson.

On this morning's walk I saw history taking place. Stella was on her own this morning and followed right along with Sadie and I until she got to the deer bed where she stops every walk. Only today was different. You can see her walking in the picture above out toward the path we walk on.

The "historical" part is when she turned toward me and started walking to meet me and Sadie without calling her. She would normally continue north to the neighbor's woods. I couldn't believe what my eyes were seeing. 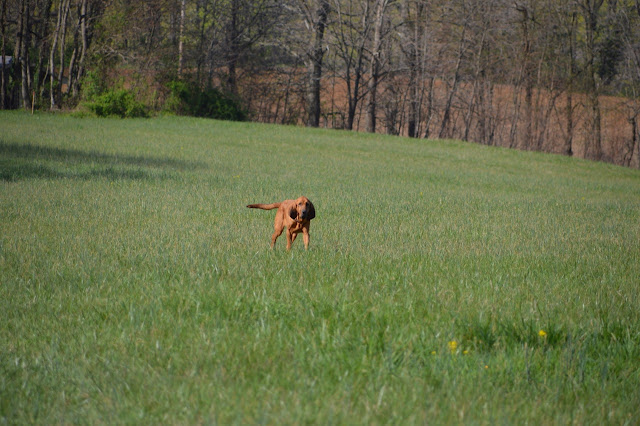 She came right up to me as I got closer. The moon and stars must have been lined up last night for this to happen. 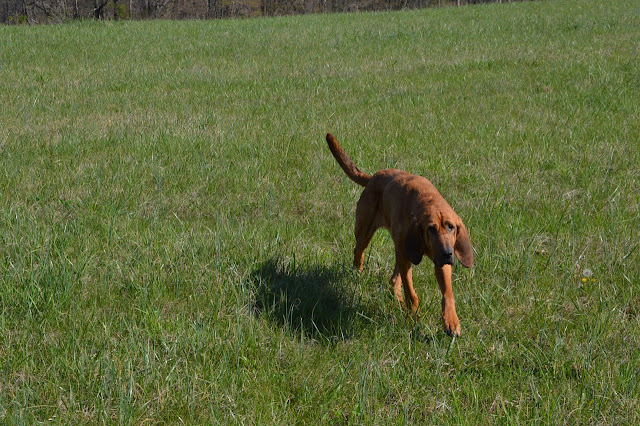 Heidi did come outside with us on her own but wasn't interested in walking. She did go with us on our walk last night but I didn't take the camera with me. So while we walked, she stayed outside around the house.

When I asked Sadie "where's Heidi" ... this is her reaction. 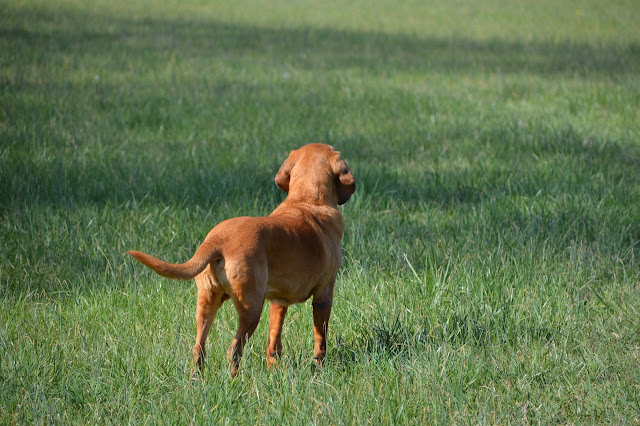 Then once she saw Heidi in the distance ... can dogs really see that far??? Some studies say no but I find it hard to believe she is running toward her just based on scent. 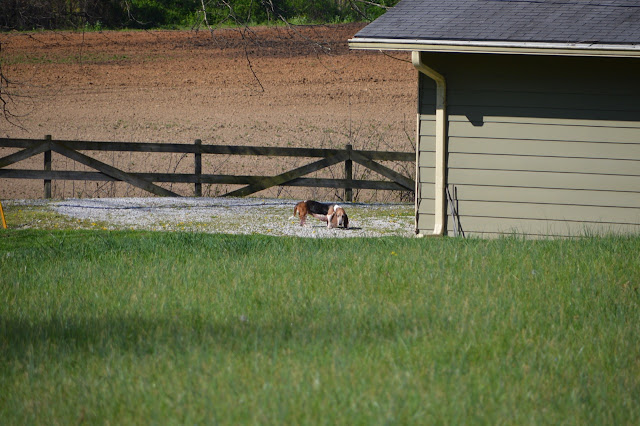 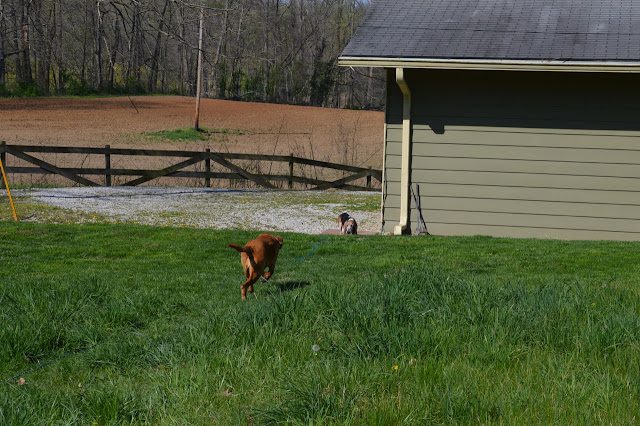 I tried but wasn't able to catch when Sadie touched noses with Heidi but she does that all the time when they meet like this. She will even do that when Heidi comes back inside at night while Sadie is inside the house waiting for her. 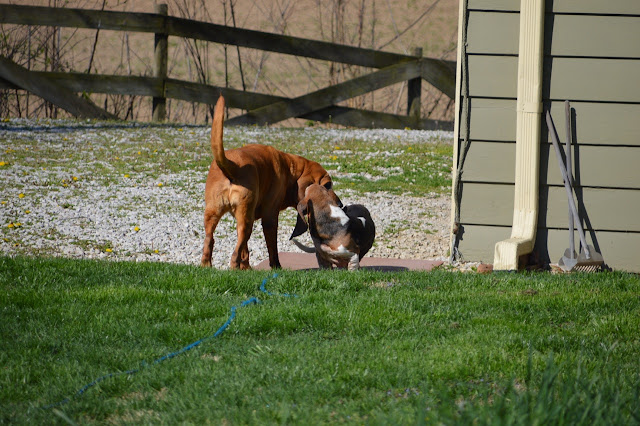 I guess this picture captures her tail wagging but a lot of my pictures of her do not. Her skin and coat seems much better than anytime I can remember since October 2014. Yet, when I look at her pictures a year ago, she looks the same. She has gained her weight back. 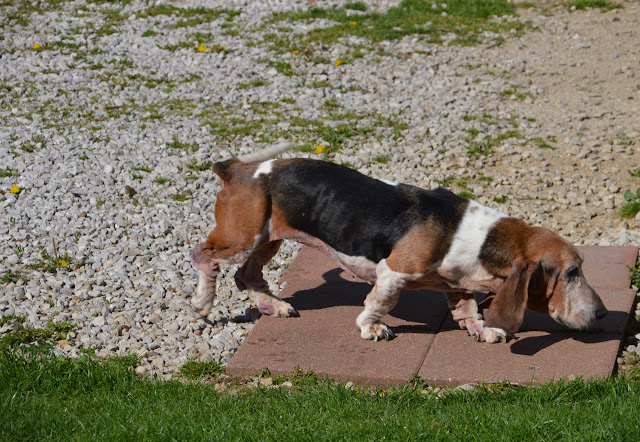 Stella being Stella, doesn't acknowledge Heidi and just walk right past her like she wasn't there. LOL She has always been like that for the 20 months that she has lived here. She will even walk on my feet at times or try to walk over my legs if I am blocking her path while I sit on the couch. 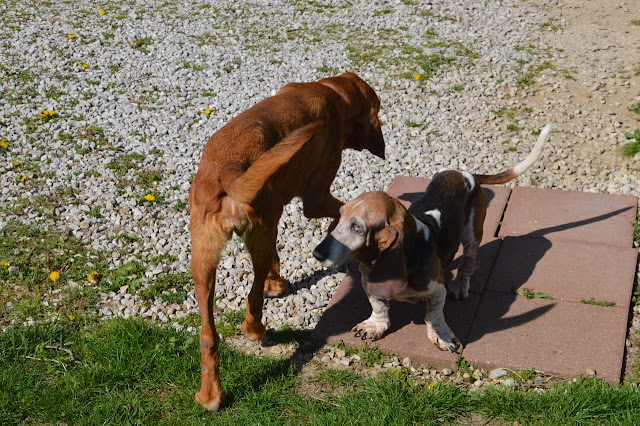 I am in the process of taking a series of pictures of the farmer that plants the field across the highway. I'll post those and only those pictures later tonight showing the process from expanding out their planter rakes to loading their seed.

Since they alternate between corn and soybeans every year or two, I am expecting soybeans this year but will have to wait and see what grows. while they do that almost a month early, the other field on the other side of the dirt path has not even been plowed yet. That field is owned by a different farmer.

Fantastic weather to be outside.

Yesterday was my 3rd year anniversary of retirement. I still call it my best career decision I ever made. Some adjustments had to be made financially but I would not change a thing, it's been great.

If you have any questions about the satellite internet, leave a comment or send me an email and I'll answer the best I can. I still feel the pictures are looking better with the lens hood on this Tamron lens.