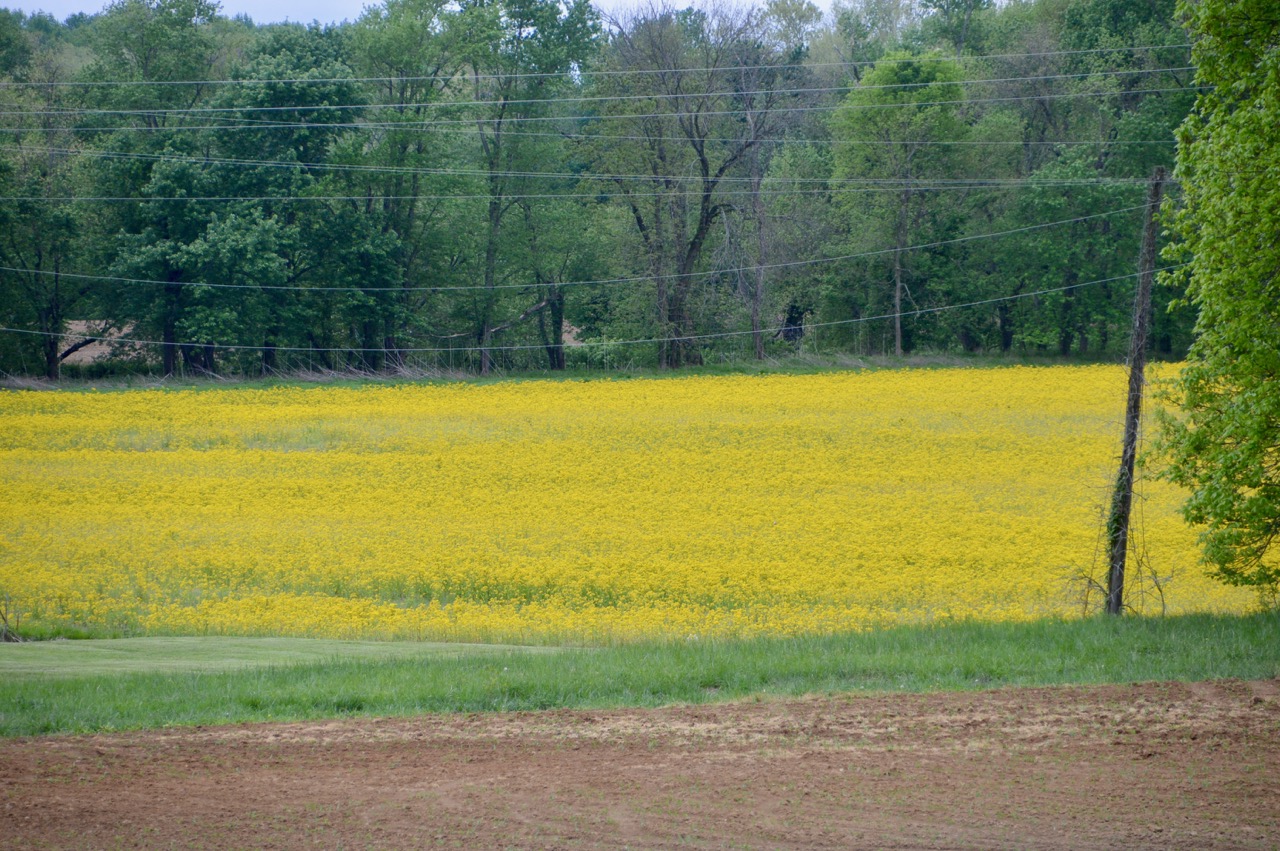 Little did I know just how interesting Friday's morning walk would get. Needless to say Stella acted like her 'old self' today starting the minute she woke up. 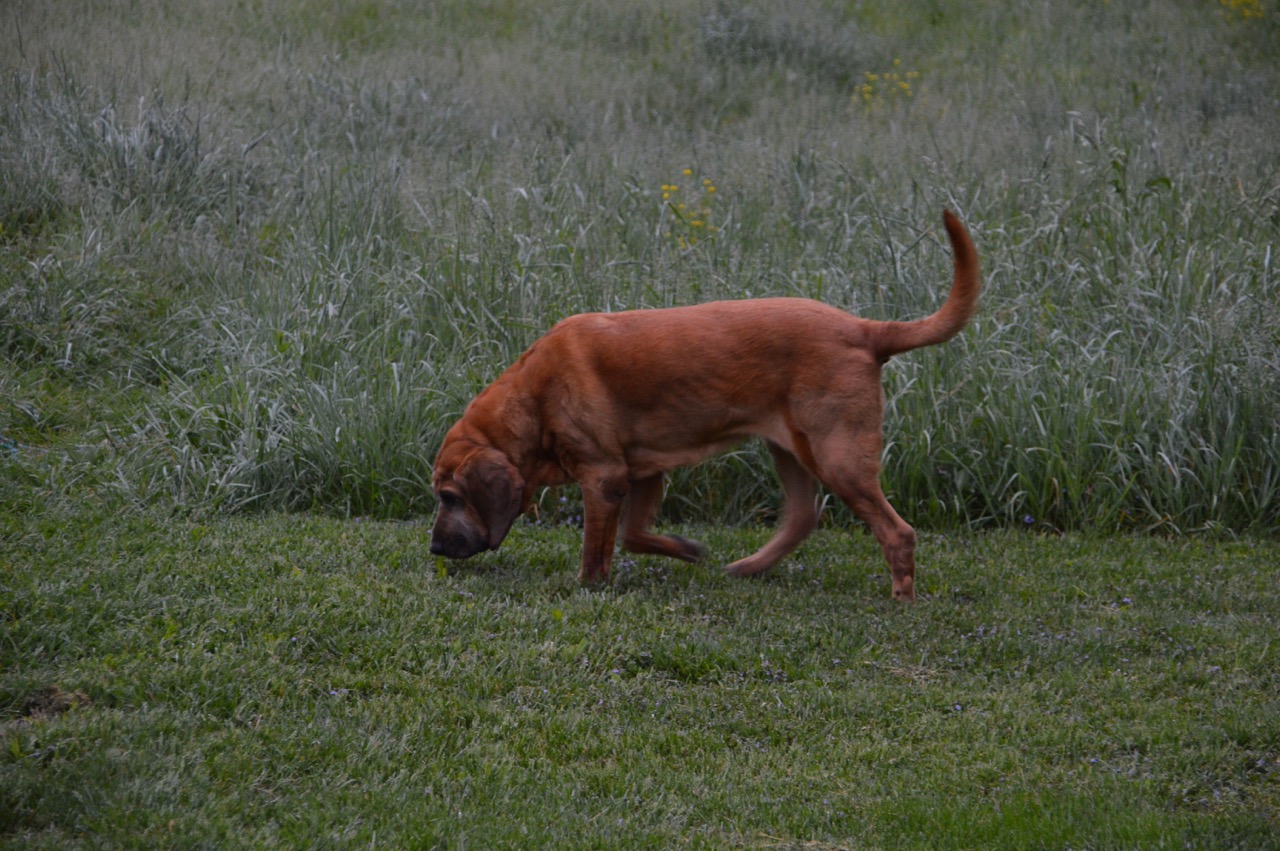 We were up early again and while I was taking my first pictures of the day, Sadie and Stella were out trying to identify what had been in their yard while they slept last night. It was just a few minutes past 7am. 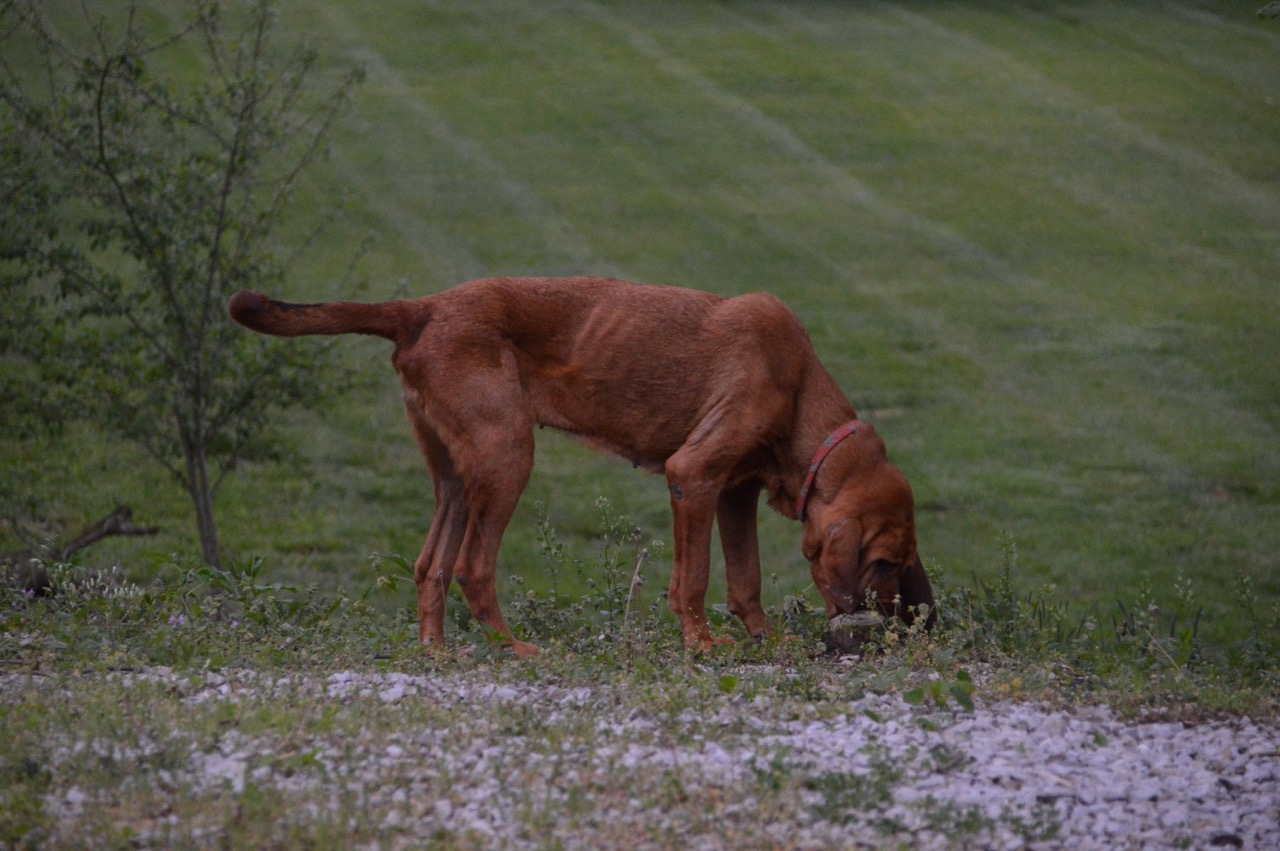 I know it will take a while for Stella to regain the weight she lost but it looks to me that I am seeing fewer ribs showing from the side. Heidi gained her weight back, so can Stella. 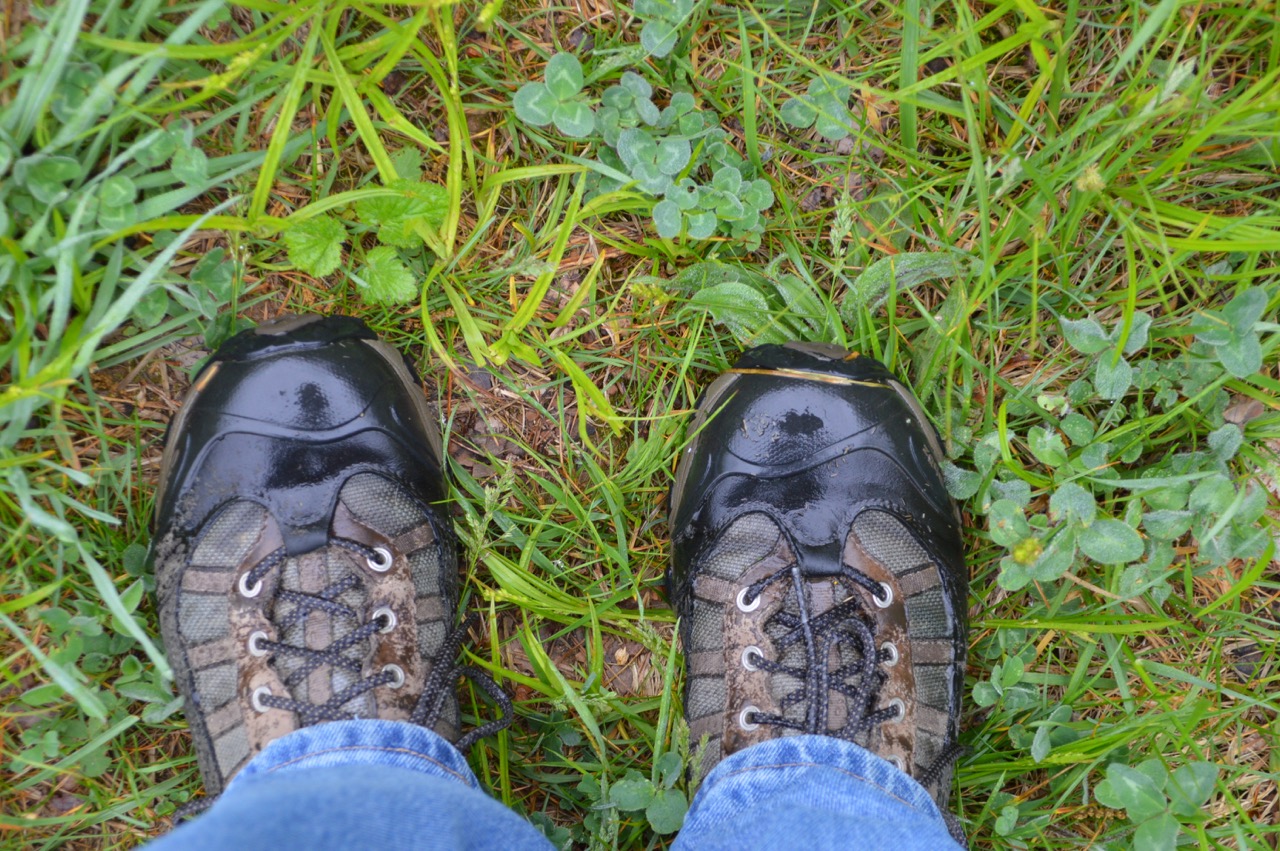 Being up earlier meant the coffee was consumed earlier, the reading finished and Sadie showing up at the corner of my desk chair earlier, letting me know we needed to get our morning walk in before the forecasted afternoon rains. With that early departure, the field was even wetter than normal. 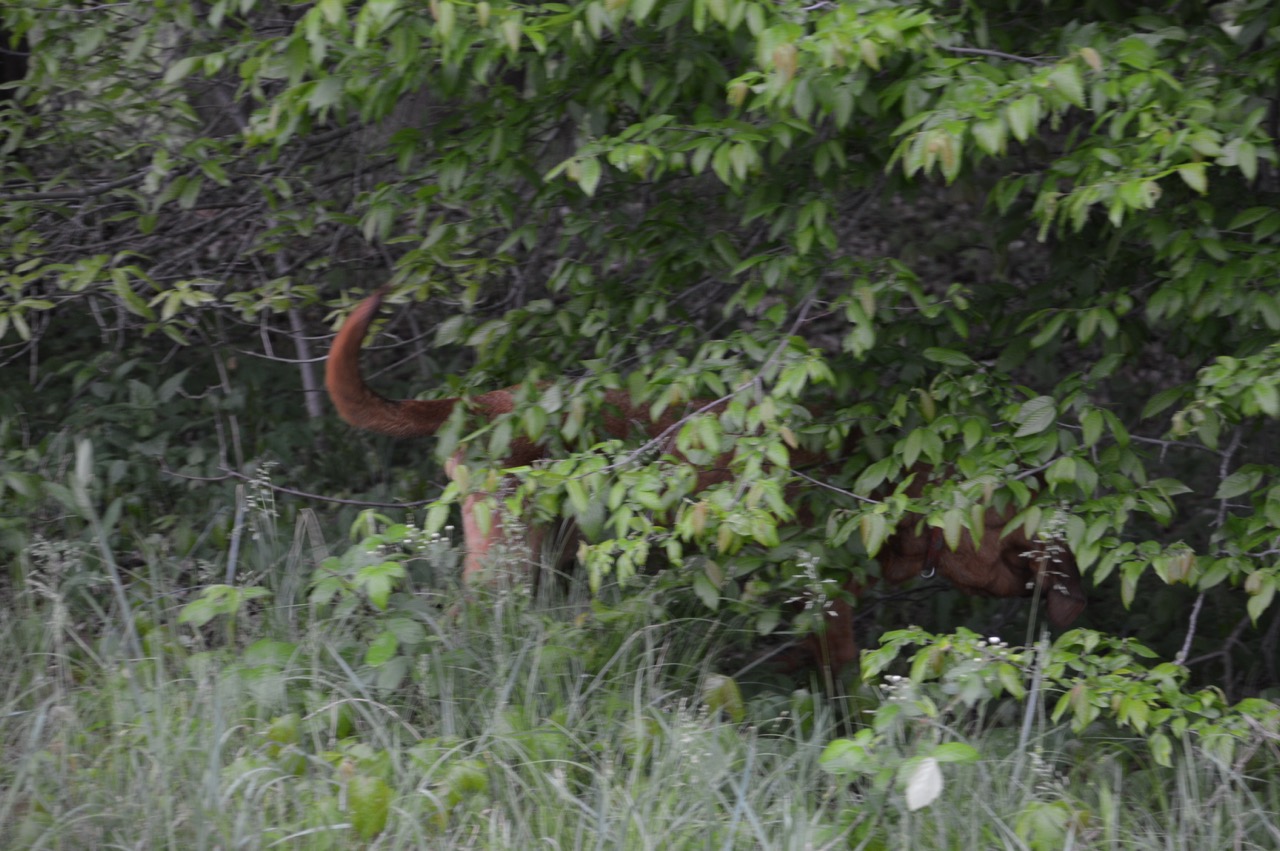 If you do any reading about the breeds of the basset hounds and bloodhounds you will notice there is a difference in them, besides their size. Bloodhounds have one purpose if hunting ... to flush out deer. Basset Hounds have one purpose if hunting ... not only to find rabbits but to chase them into thick brush where the rabbit will panic, stop and catch them.

{my basset hound in 1990, named Sadie, did that exact thing. I saw brush moving, that was so thick I could not walk in it. I heard her baying and a little later a happy basset running back to the car with signs that she had a rabbit lunch}

I found out yesterday afternoon that the bloodhound writeup was absolutely correct while Heidi stayed back in yard. 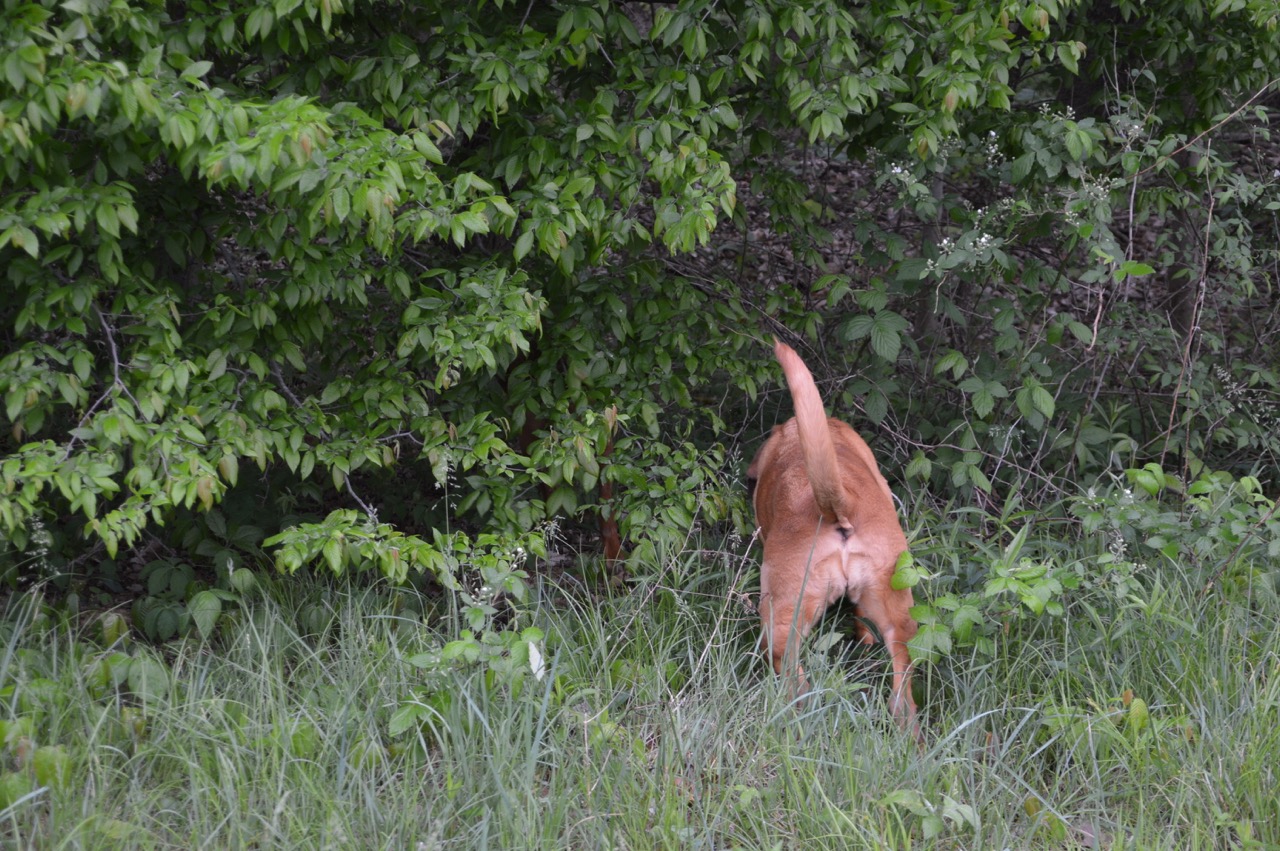 Sadie was near this area yesterday afternoon, although this picture was taken in sequence this morning for Stella's venture, when not TWO FEET AWAY from Sadie's nose a rabbit hopped out of the ground and moved as fast as possible into the woods ... neither Sadie or Stella even noticed it. 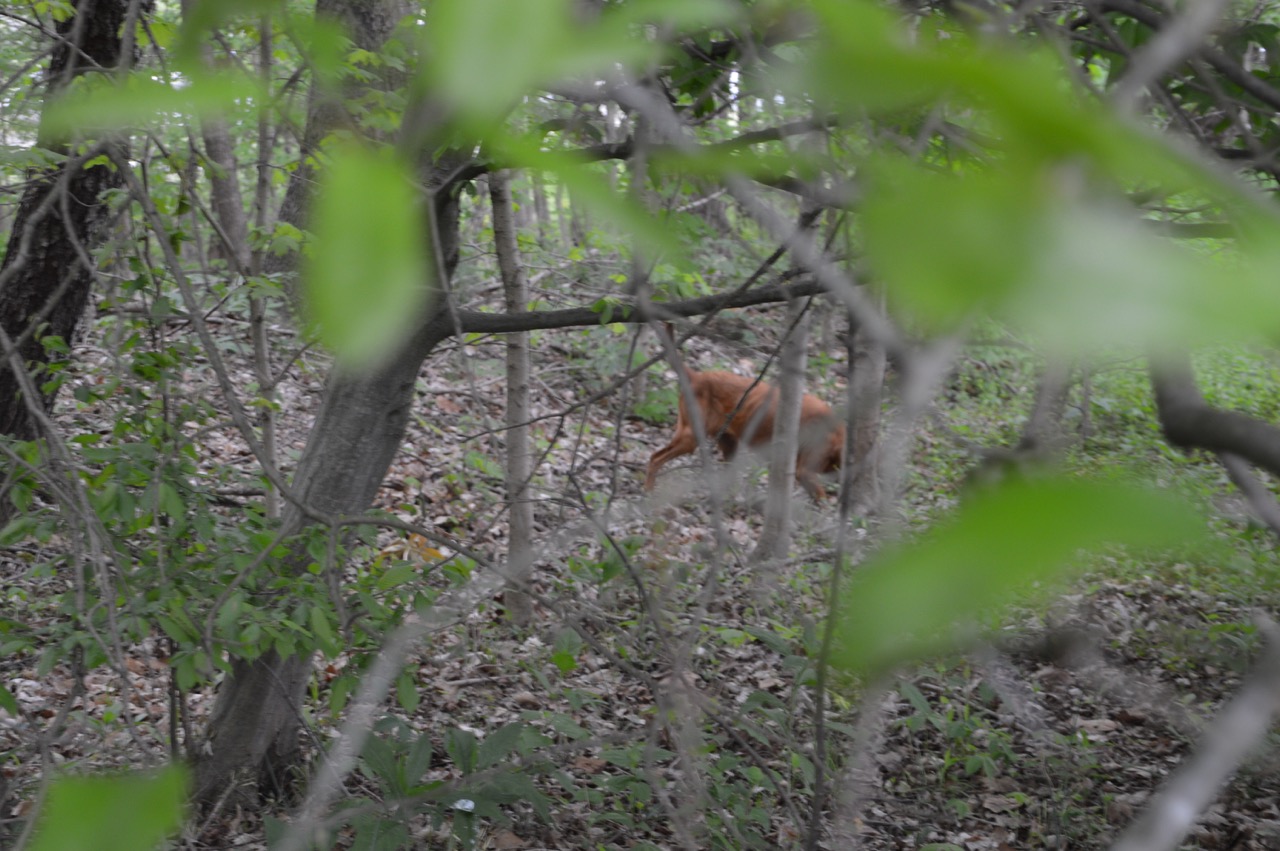 This morning was a different story as you have seen from the previous two pictures. Although, NO rabbit was involved. Stella reacted so strong to a scent that she walked into the green brush. Ignoring me calling her name. I knew when Sadie joined the party in the previous picture I could have a major problem on my hands. I could tell that both were excited. 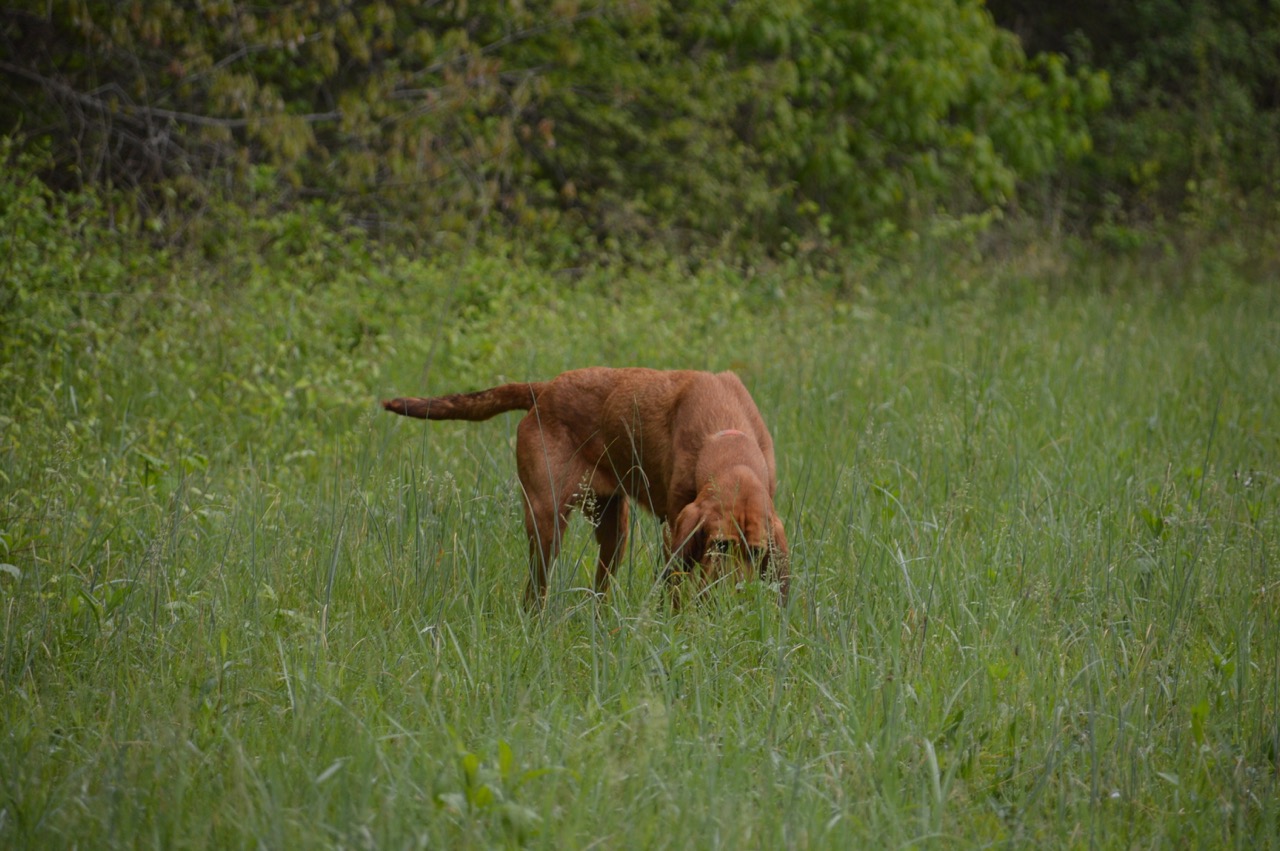 Luckily I got both hounds back out into the field and finding out myself just how many of those bushes had thorns ... I'm glad they didn't tear my jacket sleeves.

Stella had to recheck that spot one more time before she left to catch up with Sadie. To see her jog, not trot, to catch up to Sadie was a blessing in disguise. She was going faster than a trot and looked like her old self compared to the past few weeks where she walked the whole way not much faster than a snail. 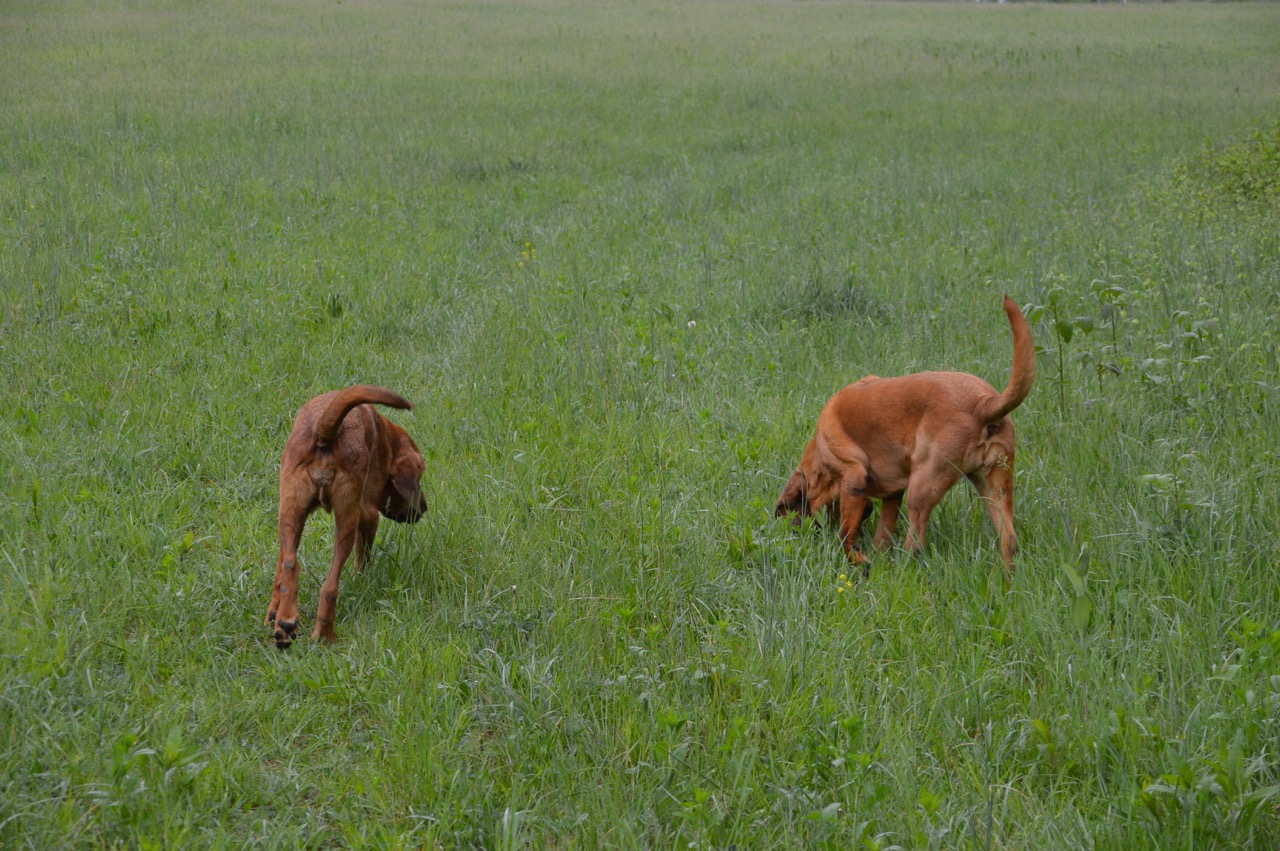 The deer scent was extremely strong this morning. They were both more active than normal, always out in front of me and at times past the line of comfort. 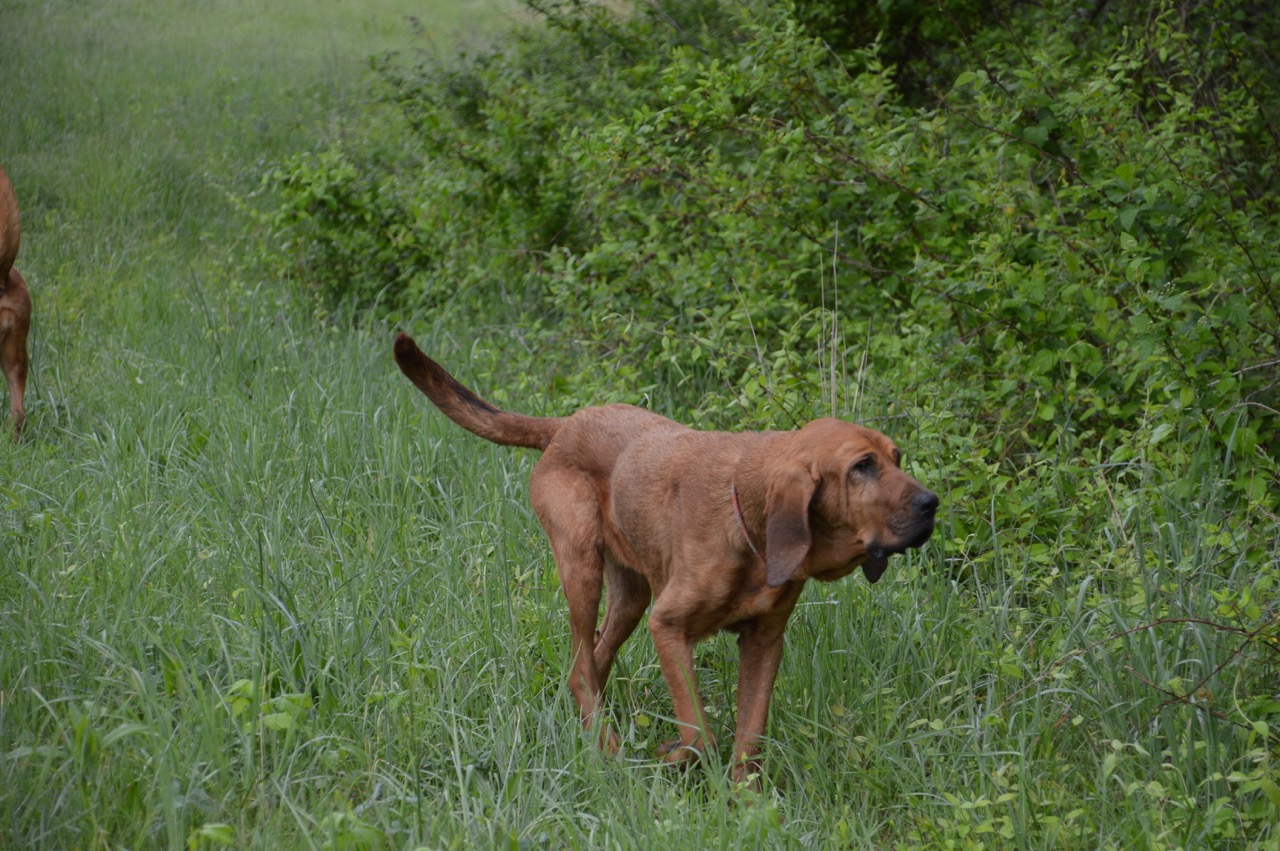 When Stella changes directions with her nose in the air I am aways ready to take off running after her. You never know what she has picked up and you never know if she is going to go after what she has smelled. That trip this morning into the woods proved that. 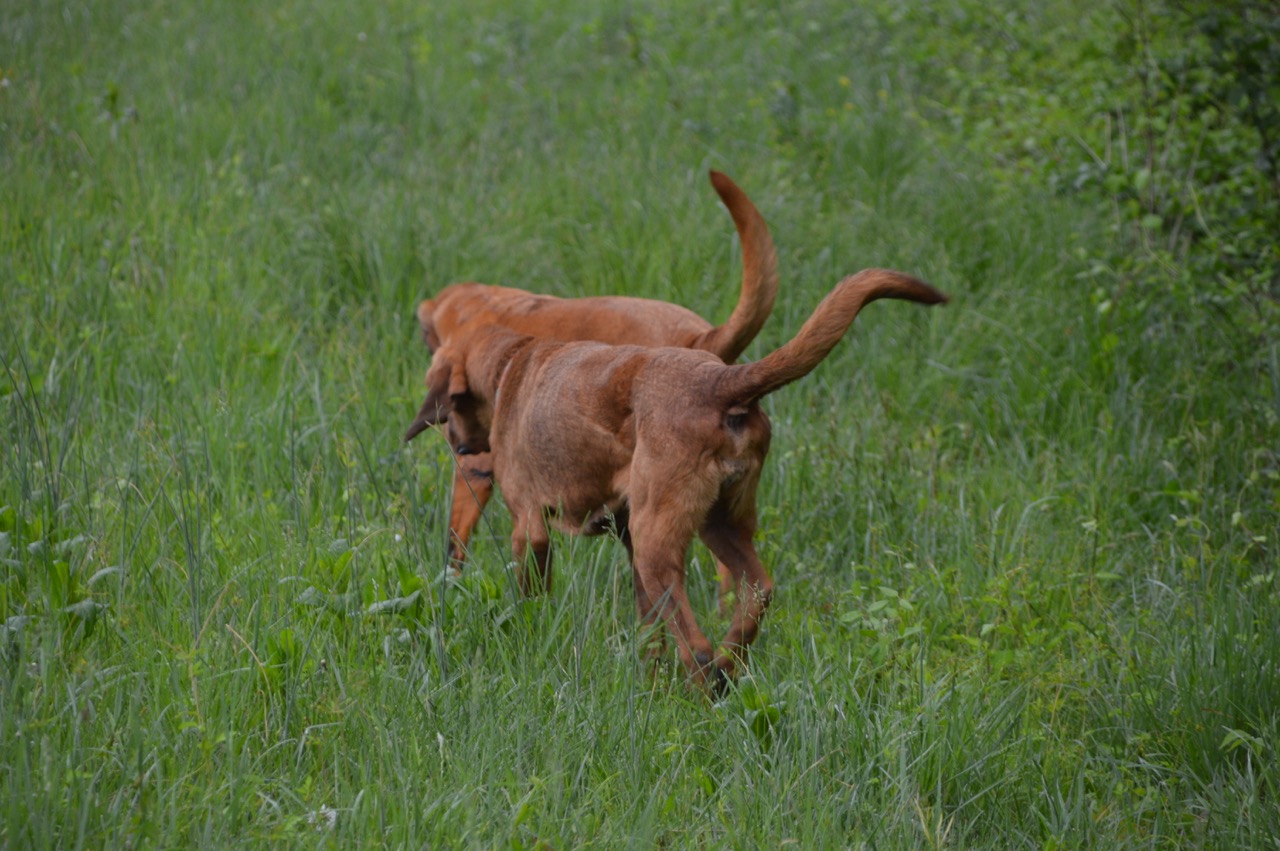 This morning was much different than past walks. It was the first time in a long time that she spent 99% of the of walk in front of me with Sadie instead of dragging her feet walking behind me. By her energy this morning, she has to be feeling better. 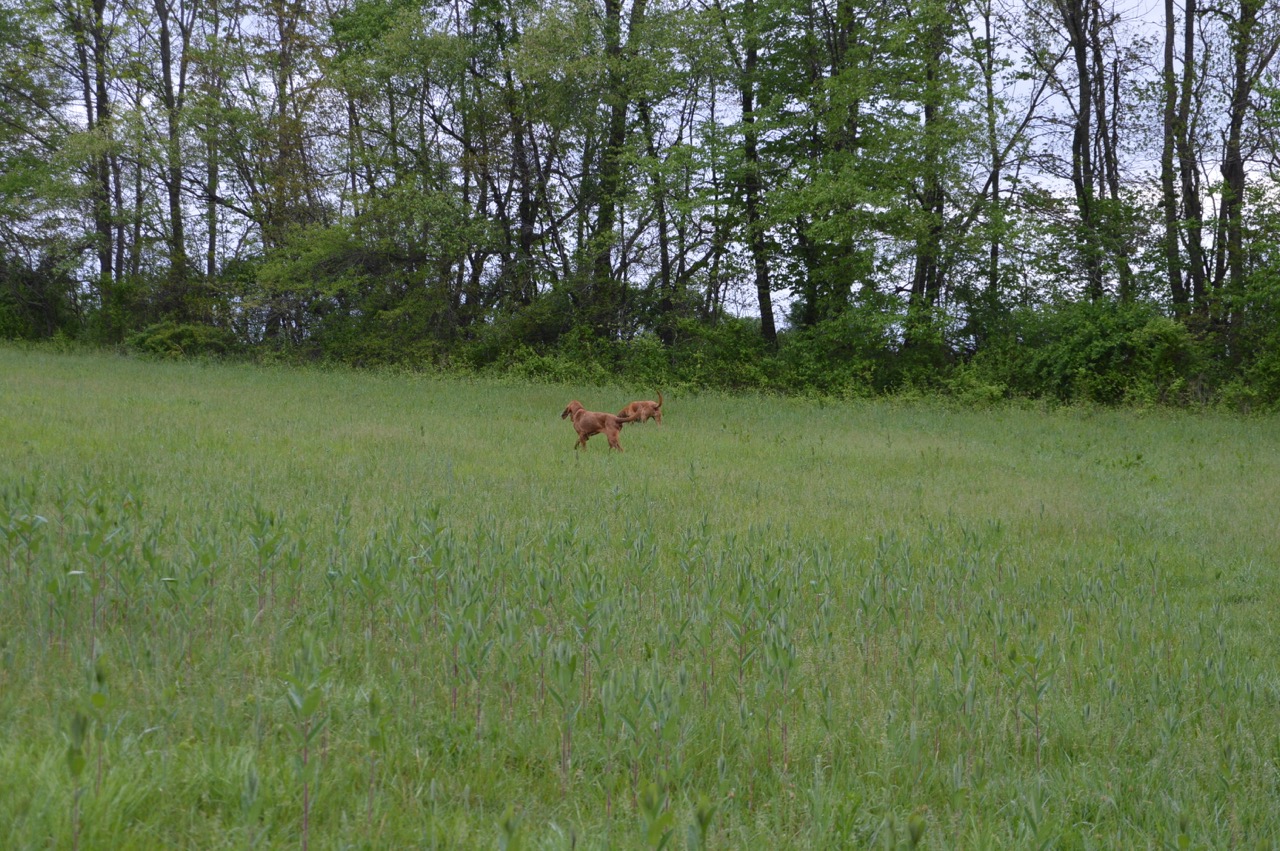 I added this picture just to show how far out in front of me they are. With Sadie's nose down like that I thought they might take off on me again so I started jogging up the path to catch them. 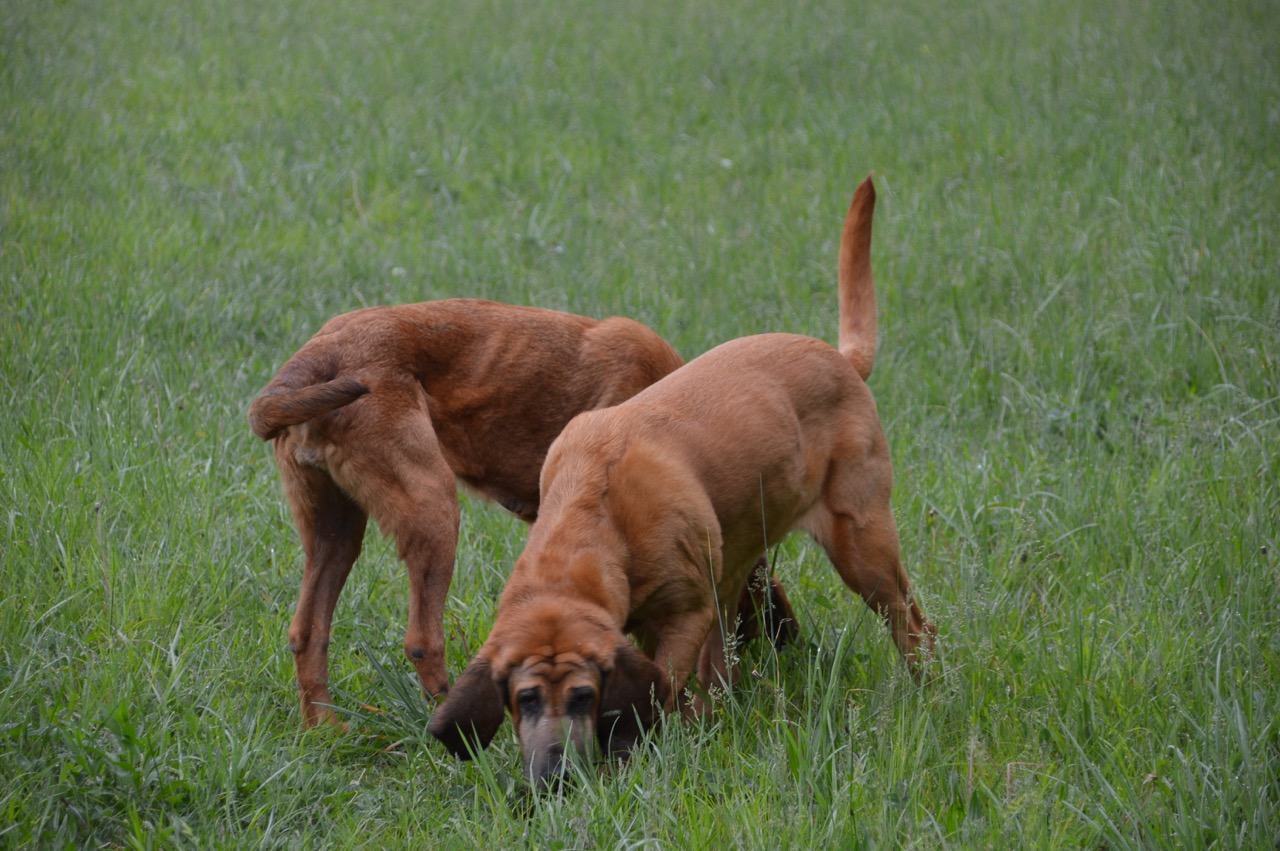 When they ignore you because of what they are smelling, that can be potential trouble unless you are in the mood to get some running in. 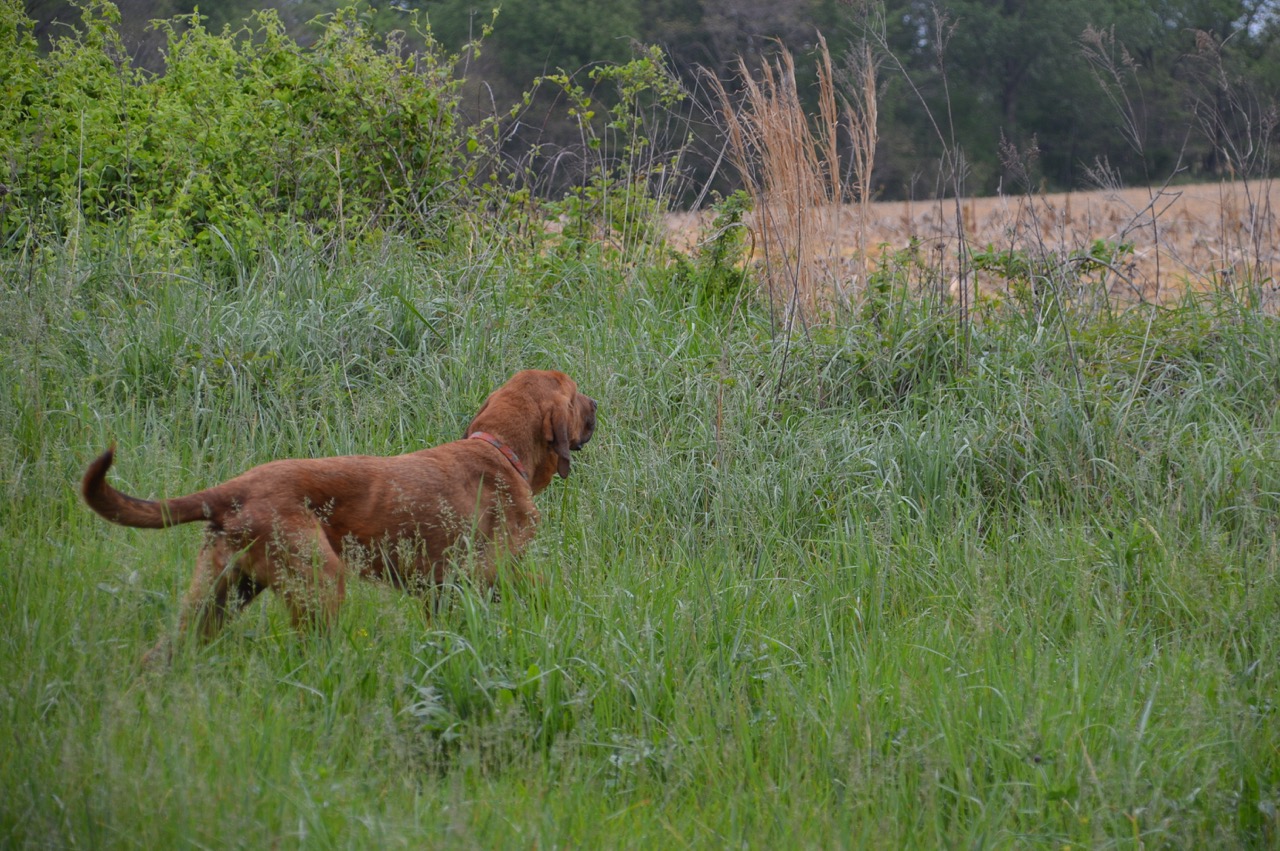 Stella is sure the deer went this way. She would be correct because that is a common place where the deer jump over a small hidden fence and take off into the corn field. 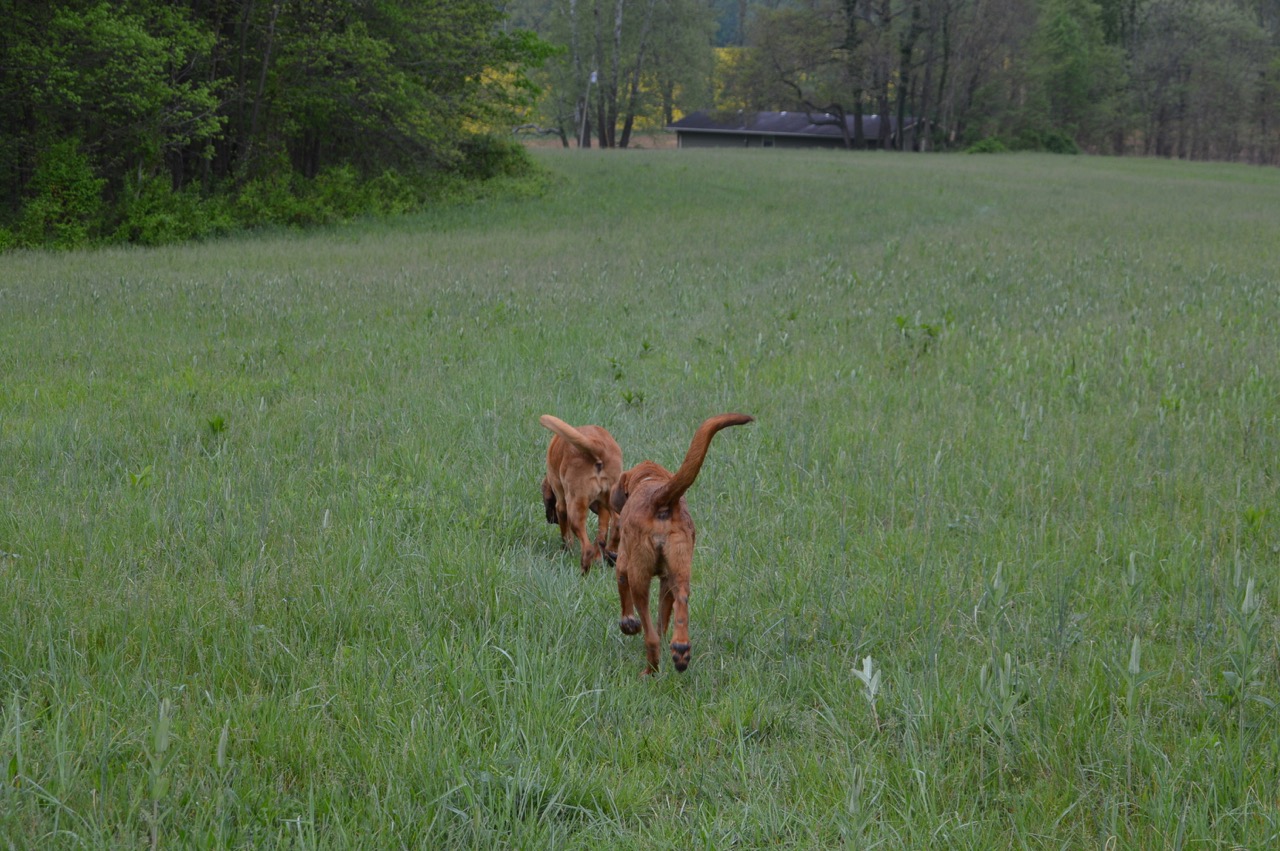 By the time I convinced Stella to turn around and head home, Sadie was trotting way in front of me. Again, it was great to see Stella take off running to catch up with her. I also like seeing her tail upright which shows she is feeling good. 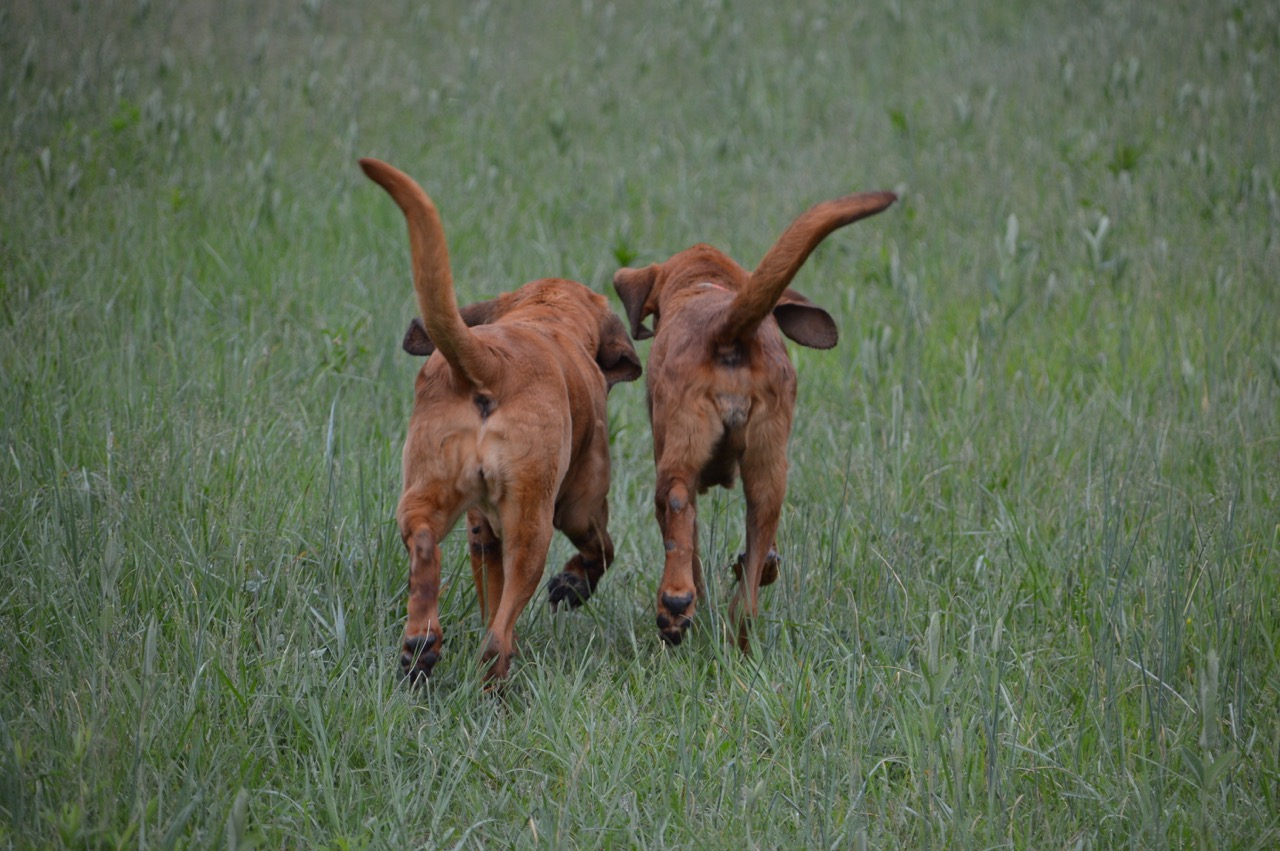 Not quite a full run, but a jog faster than a trot ... and far enough away that 200mm zoom was needed to catch up to them. 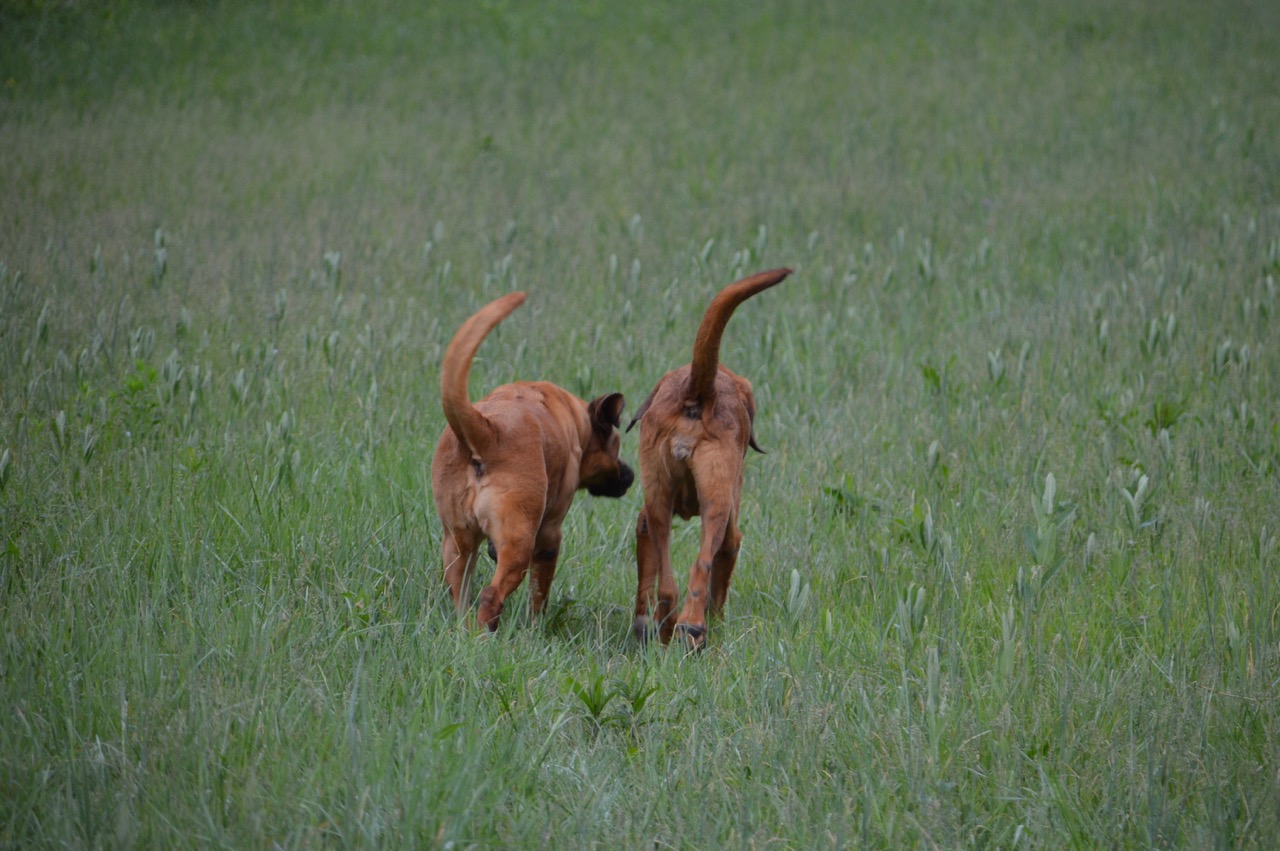 Sadie reminding Stella to keep it at this pace. 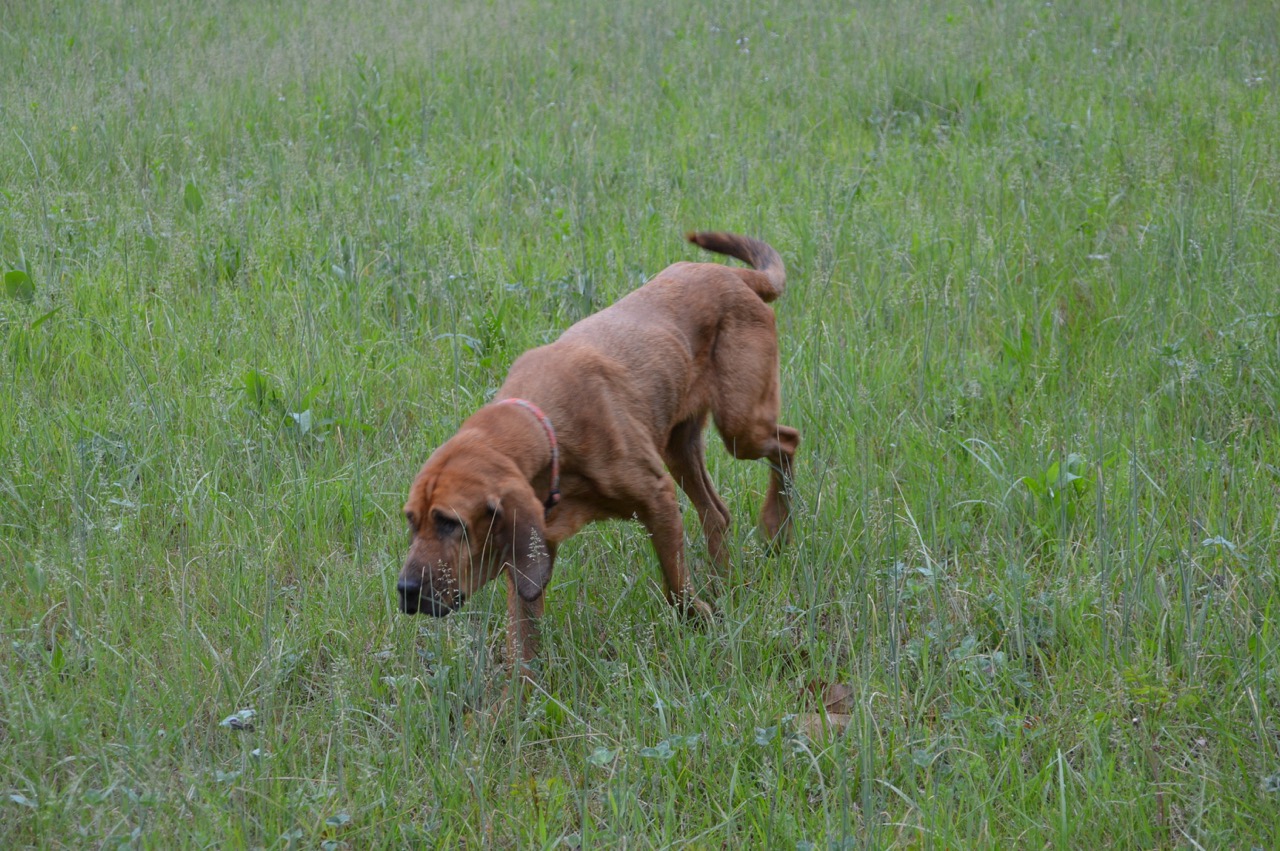 Close to home and still moving faster than normal. 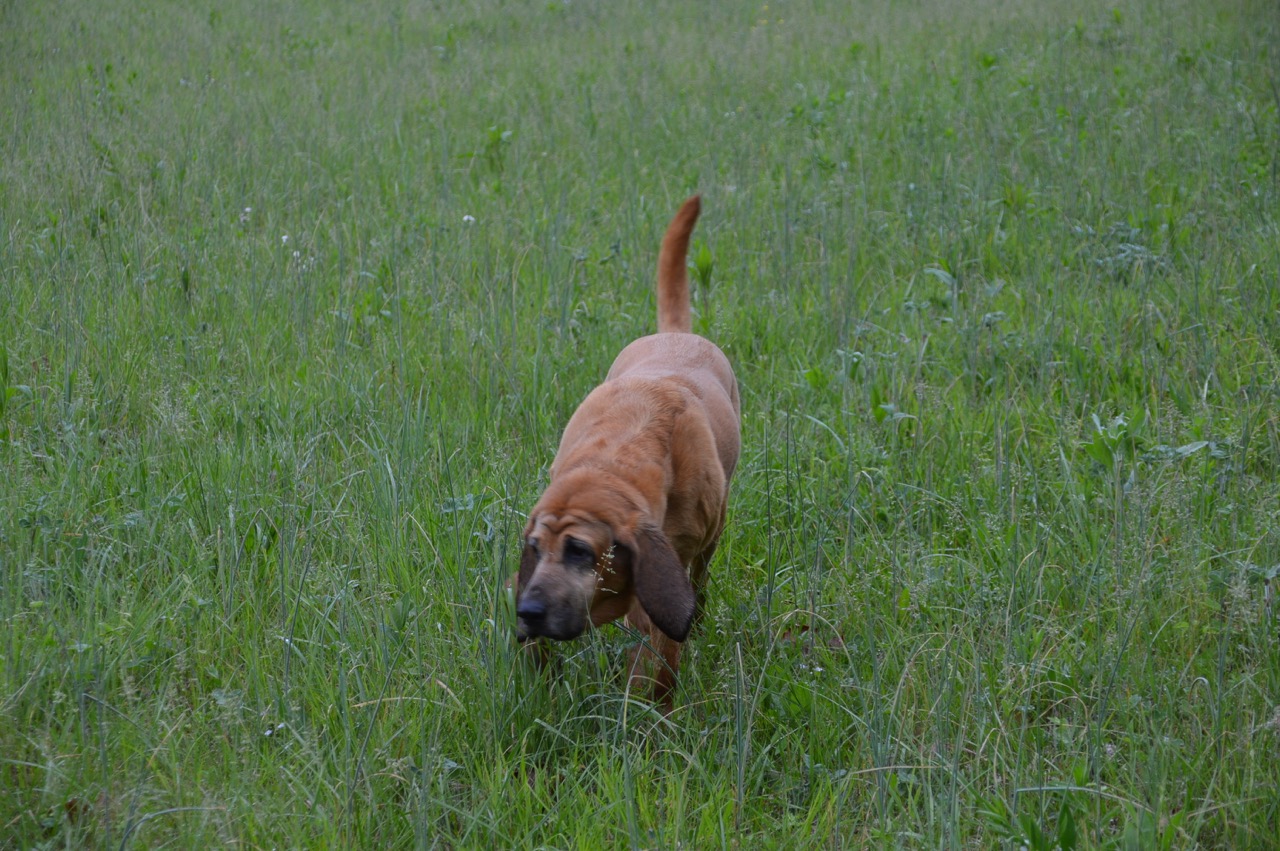 Sadie walked it in but was always on the lookout for a new scent to identify. The rain may or may not show up and that will determine this afternoon's activities. In the meantime Stella is back to destroying her Nylabone. 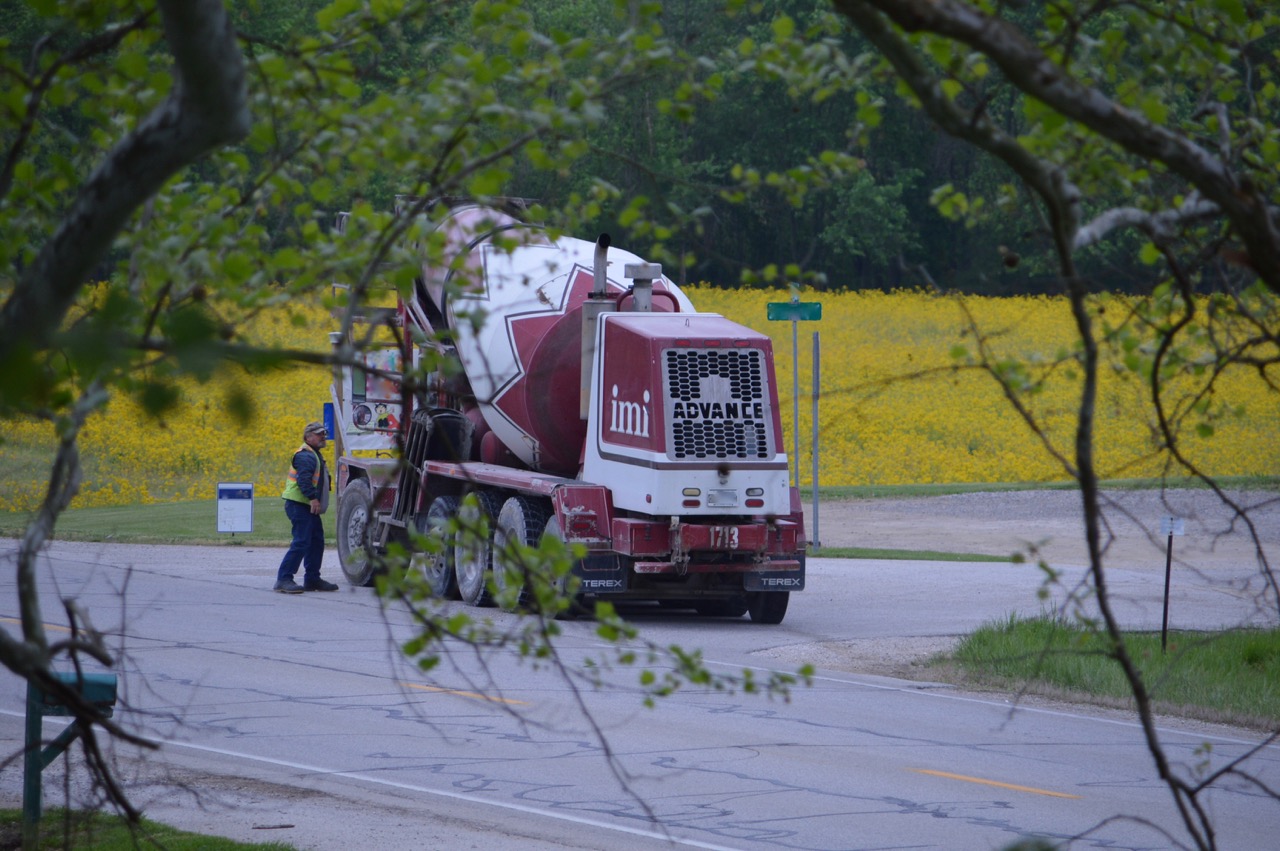 It can never be a good sign when a concrete truck pulls off the highway to check their load. I wonder if a warning light on his dash told him to pull over and get out to look or did he hear something out of the norm?

Not sure of my plans today but it feels like a day to read books, a game or two of Mahjong on the computer and an afternoon hound walk if it doesn't rain.

The temps are trying to crawl back to the 70's today but have a long way to go, here in 'the tropics' of southern Indiana.
at April 28, 2017
Email ThisBlogThis!Share to TwitterShare to FacebookShare to Pinterest
Labels: Basset Hound Purpose, Bloodhound Purpose, Stella Running, Stella's New Boundaries