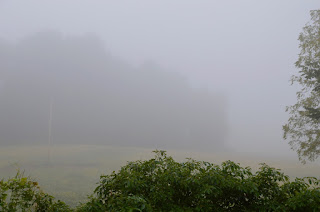 We woke up Sunday morning to some heavy fog and allergies that have been out of control the past few days.

It only took a few hours before the sunshine started to break it's way though the fog and clouds. We are headed back to the mid to high 80's this week in 'the tropics'. 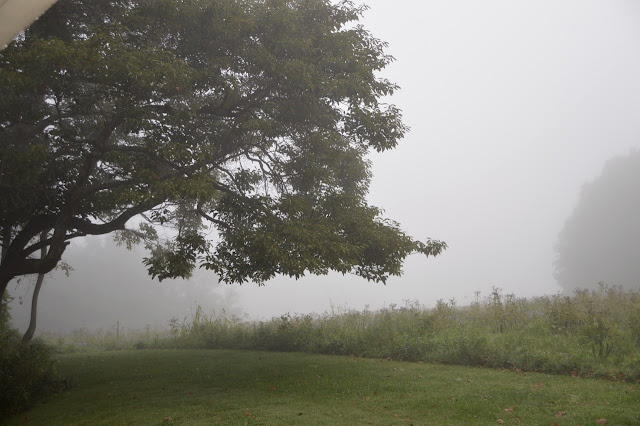 I'm not sure if it was the fog, but Stella didn't get off the carport floor and Sadie never moved from "Winston's Patio" ... stared out into space, glanced and at me ... then headed back to the door to be let in, without me saying a word. After all I've been the full-time doorman since April 2014, they decide the plans for the day.

I can only assume this change in seasons this past week is the cause for me going crazy with my nose being plugged, itching and setting all-time sneezing records ... it might be the reason that Heidi and Stella have been scratching more. 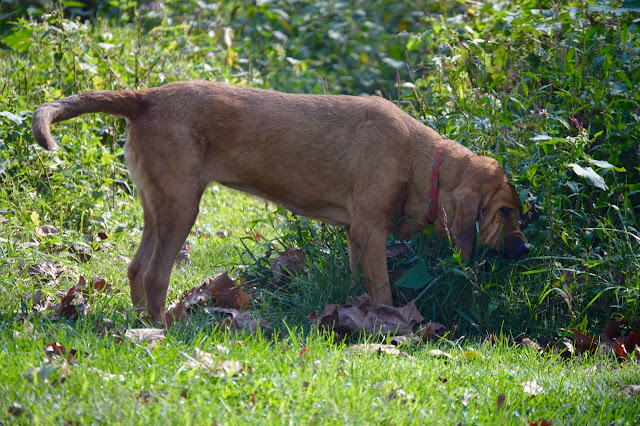 A little later we went back outside to sit and enjoy the morning. As a test I mounted the Nikon 55-200mm lens to check something out that I was curious about. Interesting that any distance past 135mm would not auto focus, as before.

Sadie was sure someone had been in our 'burn pile' last night. I didn't have an answer for her when she looked back over to me. 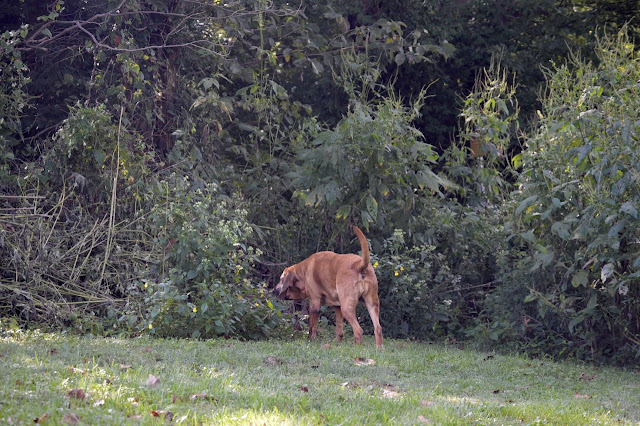 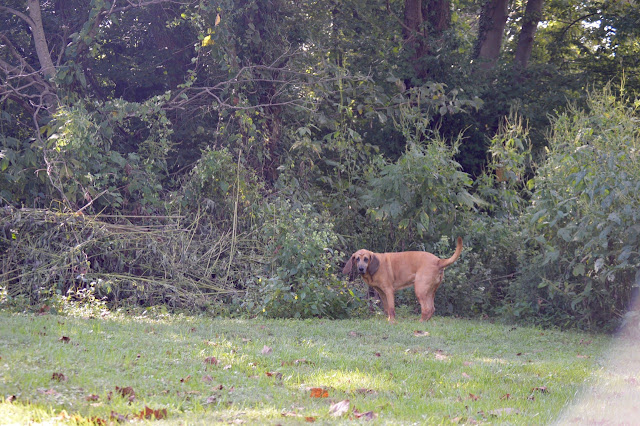 Then they did what they do best. Put their noses to the ground, explore the yard for any new traffic but only after they made a trip to the field to dump their tanks. I wonder why Heidi can't use the field like the bloodhounds do? 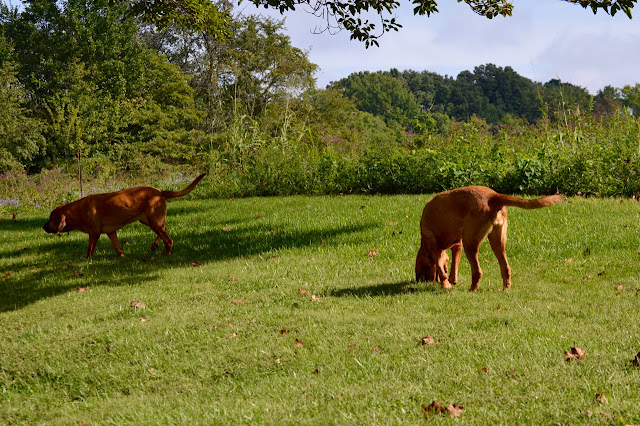 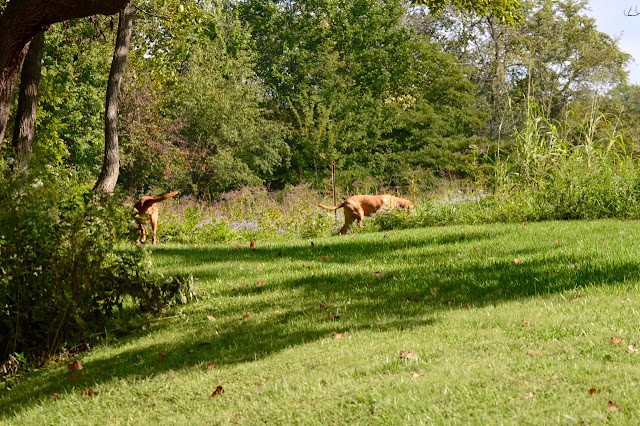 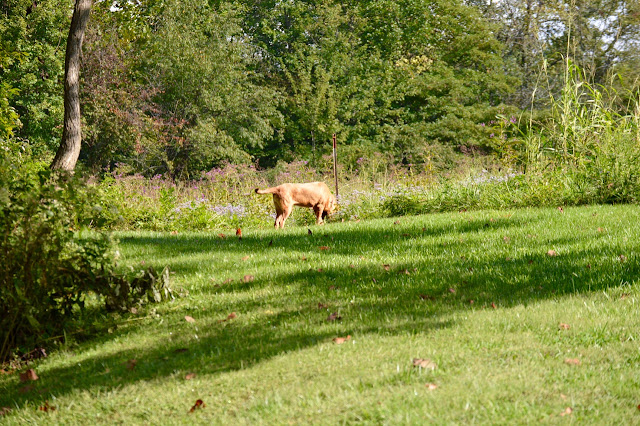 I was pretty sure that I was going to have to go get Stella. She likes to head north outside of her boundary. With that ditch running along the field and my neighbor's yard, leading to the highway, I cannot afford for her to find a scent she likes well enough to lead her in that direction. 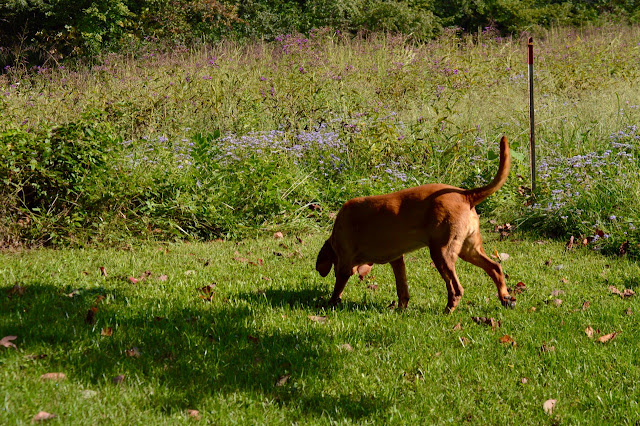 Here is is coming back after I called her. She wasn't thrilled about having their excursion cut short. 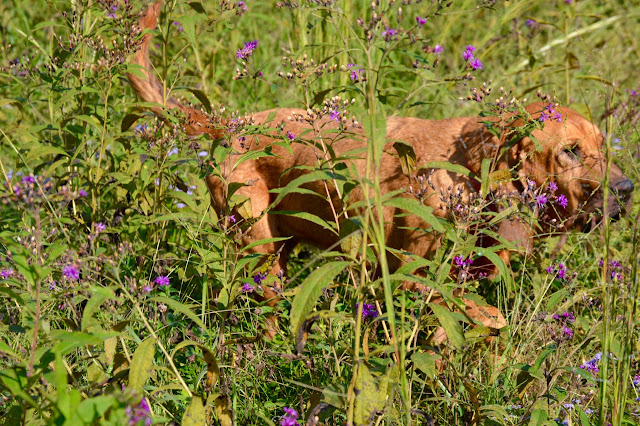 She continued along the line of the yard, up in the area that I cleared in April 2015 and planted grass. That has been one of the best things I've done since living here. 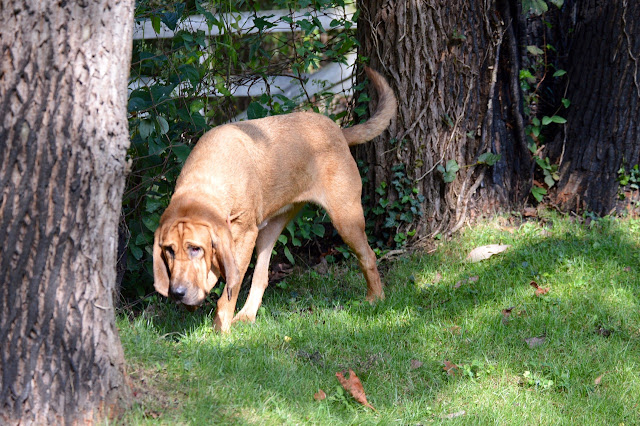 This fence is on the north side of the yard, with the old wire fence running north and south. Every year I burn that area so there is fresh growth for the spring and summer. These are taken a few days after I cleared out that overbearing, wild Giant Ragweed. 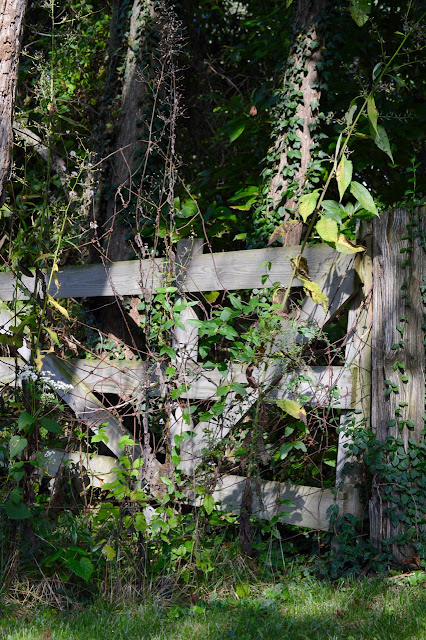 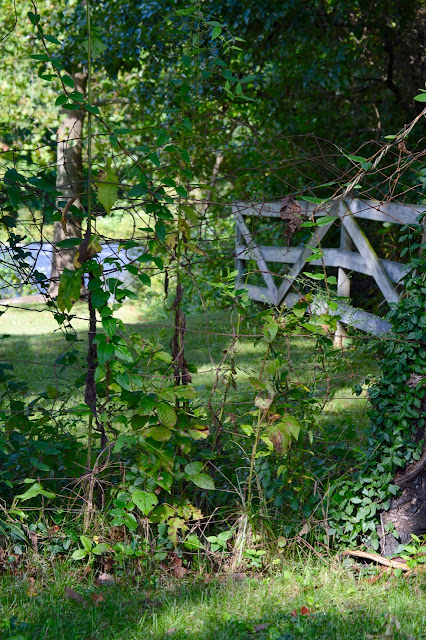 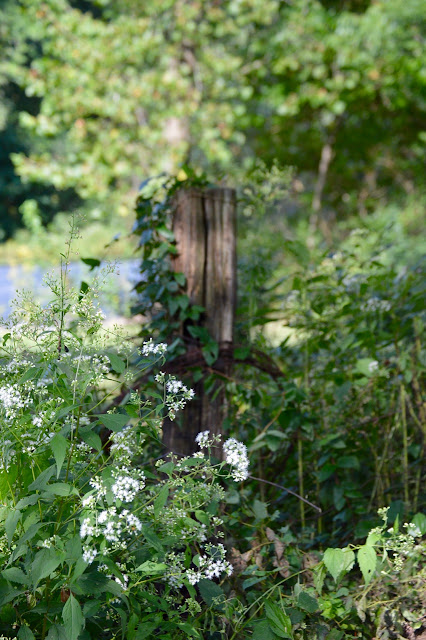 We might have just enough time to take a hound walk before the first NFL game at 1pm. After that it's weekend football routine, just like Saturday.

I did take the Z4 out for a nice 42 mile loop. I start driving up and down hills surrounded by trees before I turn west where it's flat and nothing but fields of corn and soy beans for as far as you can see. It was beautiful this morning with no humidity, cool air and the engine purring like a kitten ... nice and quiet.

I returned to find that Stella stayed with Sadie and Heidi like always, shut off in the bedroom. NO DAMAGE by her. She is on a streak of almost 3 straight months of letting me leave the house from 1 - 5 hours, without tearing up the house trying to get out. She is getting better.

We had time to do our daily walk before the first NFL game. The hounds were sound asleep by kickoff. 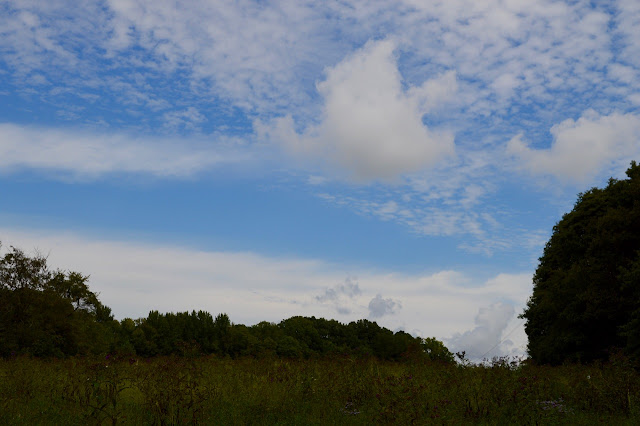 A lot of new scents after a rain. 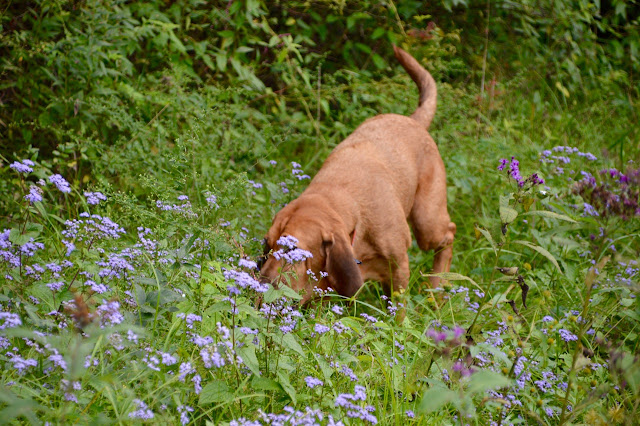 I'm not sure what Sadie had found and didn't see this look until after I downloaded the photo. Nothing jumped out, fly away or snap at her. 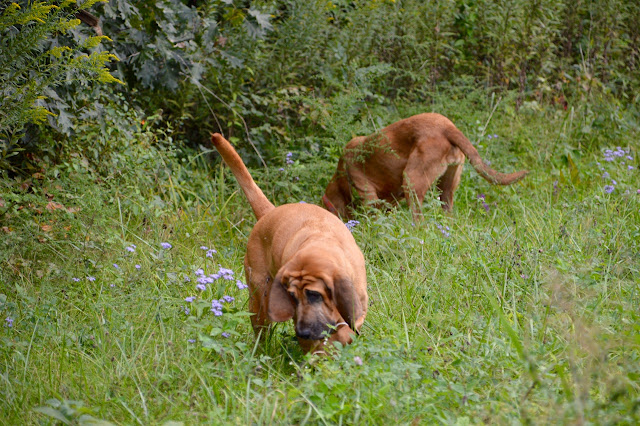 All of those purple colors from last week are disappearing fast as the purple mist dies out. 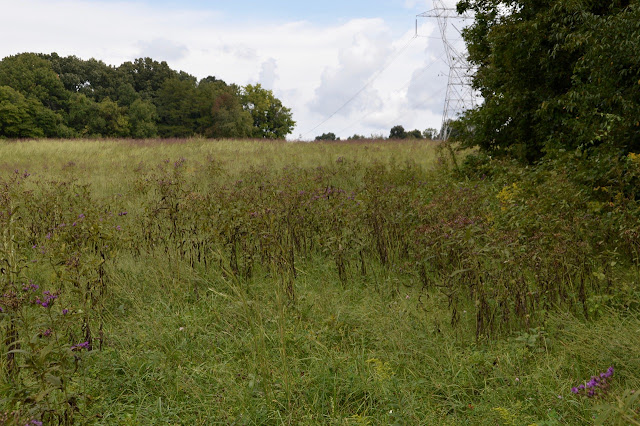 The hounds don't realized that we are on a "pre-game" walk, which means their pace needs to be a little faster than normal. 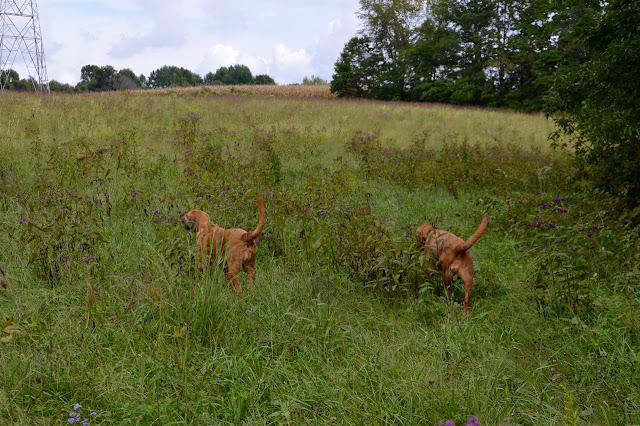 Stella of coarse has her own speed, especially where the deer sleep. 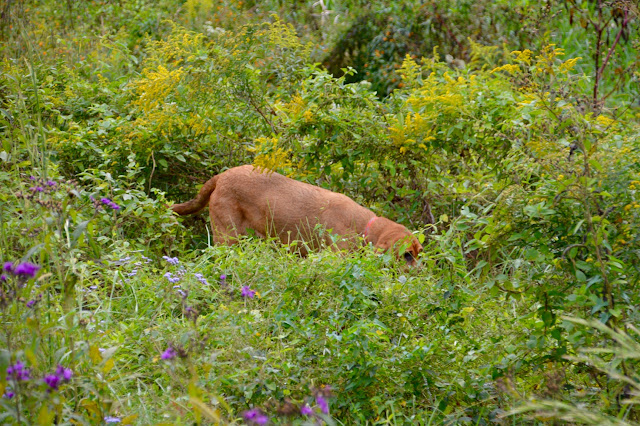 At least they came my direction when I said "come on". 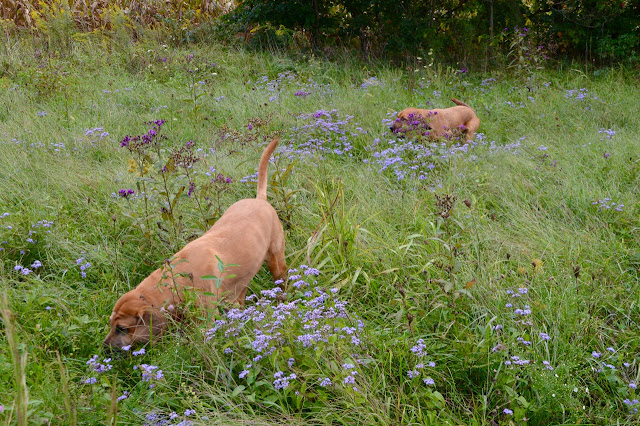 Stella tried to sneak away to the 'no fly zone' but was caught once again. 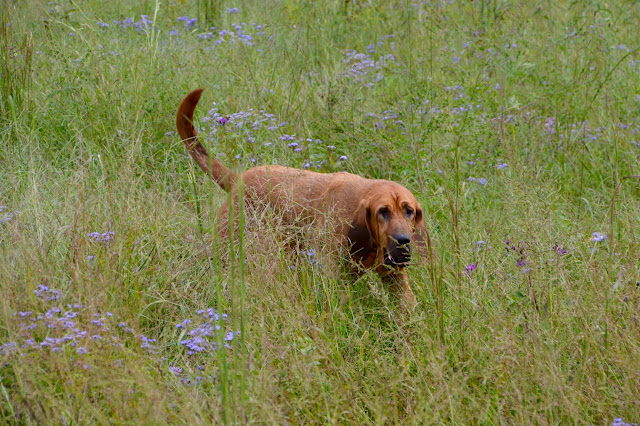 The colors of purple are turning brown. 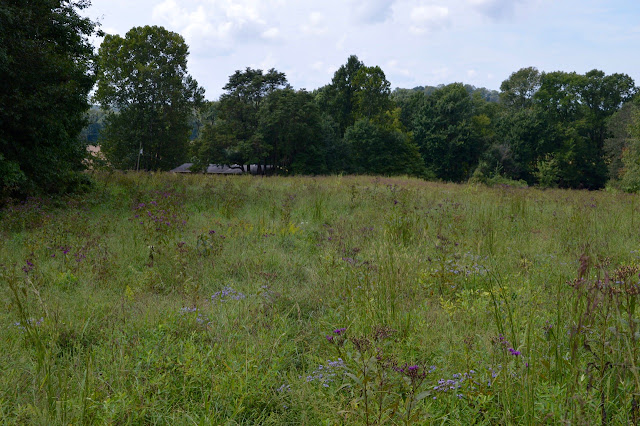 Another reminder to them that it's football Sunday. 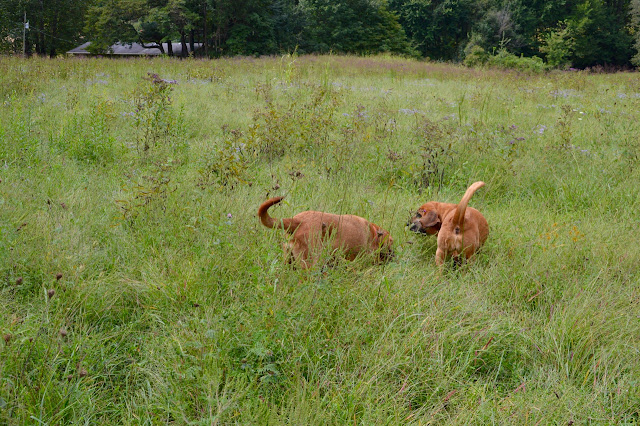 Stella wanting me to know ... she doesn't want to go in the house but wants to stay outside to roam the field. 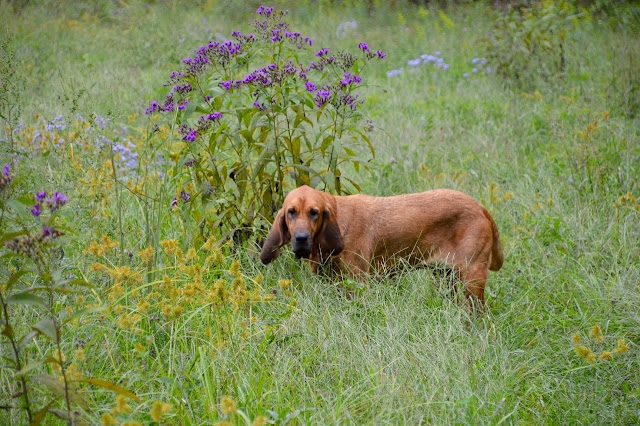 All is well though ... they were fed, walked, given fresh water and they slept ... another routine day for them.

Hot weather is coming back here in 'the tropics' of Southern Indiana.
at September 18, 2016
Email ThisBlogThis!Share to TwitterShare to FacebookShare to Pinterest
Labels: 2003 BMW Z4 3.0i, Allergies, Fog, Stella's Separation Anxiety