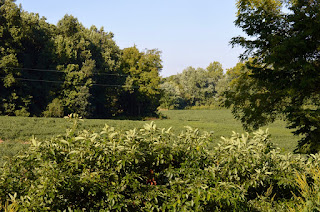 As you can see from the leaves, the wind has been from the north and still is today. Most of the time our wind is from the southwest. The best part, it was cool and a lot like yesterday.

That means a lot time outside, eating a salad, reading a book and letting the hounds roam their field.

It wasn't quite 11:15am when I decided to get a hound walk in before their lunch since breakfast was not served until 9:30am this morning. You can see how wet the field is with morning dew. Actually my feet have never been wetter than what they were on this walk. 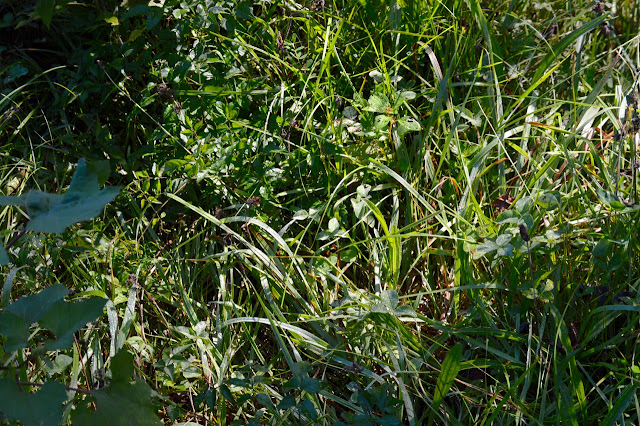 I went through google images yesterday searching "field wild flowers". Nothing in the field showed up in the results. Yet when I changed my search terms to "field WEEDS in bloom" I found everything that I see daily on the hound walk ... yet, I cannot remember their names today but can remember statistics from the football game I watched last night. That ... is the story of my life. 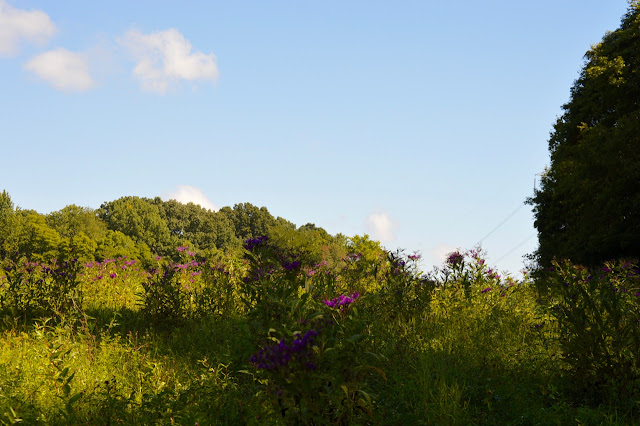 Lately I have seen more worn paths from deer traffic that cross our path a lot of the times or will run parallel. I am not a deer hunter so I really have very little knowledge about deer, etc. Still about the time I took this photo I could hear a strange sound in the woods to the right of us. We are at the first turn of the walk. 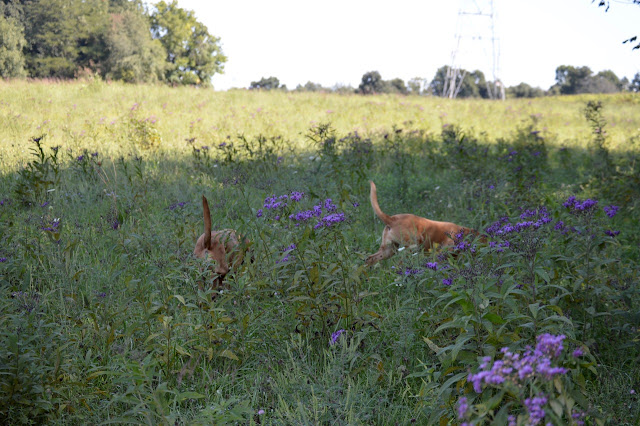 It wasn't a second after I took this next photo that a deer jumps out of the woods not more than 10' in front of Sadie. She is off on the chase with Stella taking up the rear. 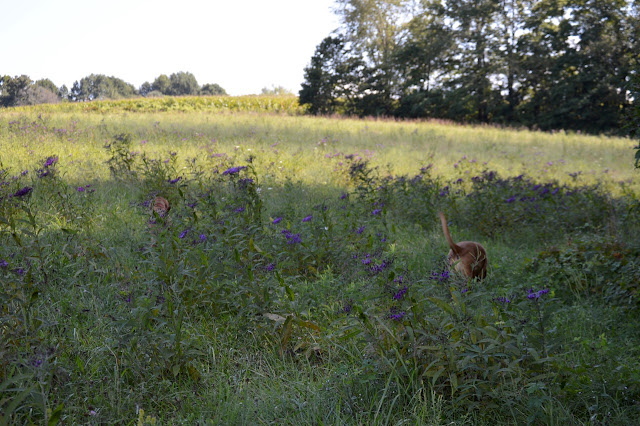 Deer and hounds are moving faster than I can click the camera ... auto focus is not instant. 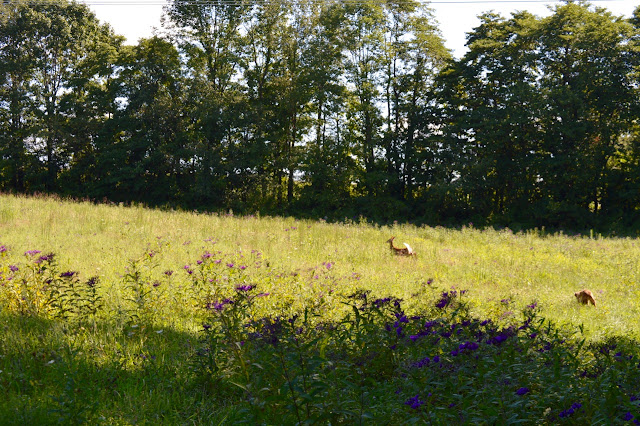 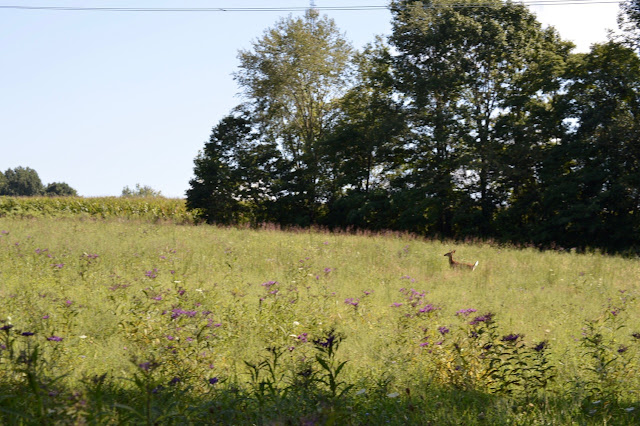 By this time Sadie has fallen back in the chase but Stella is sprinting at full power and howling all the way. 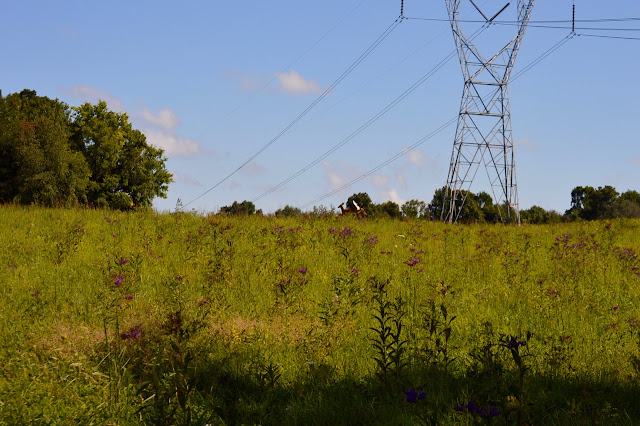 The deer is over the small hill heading north and you can barely see Stella in the center of the photo ... barely. 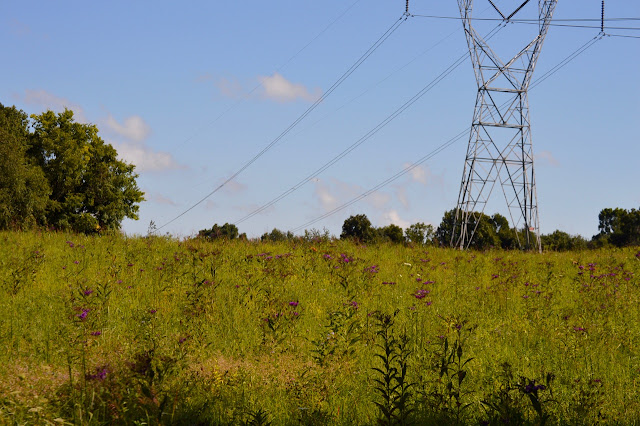 I continued walking, not running, on my path. I knew that Sadie would come back for sure but today I had a feeling that I would have to walk to the far north edge of the field to look for Stella. Here is Sadie returning soon after her chase. 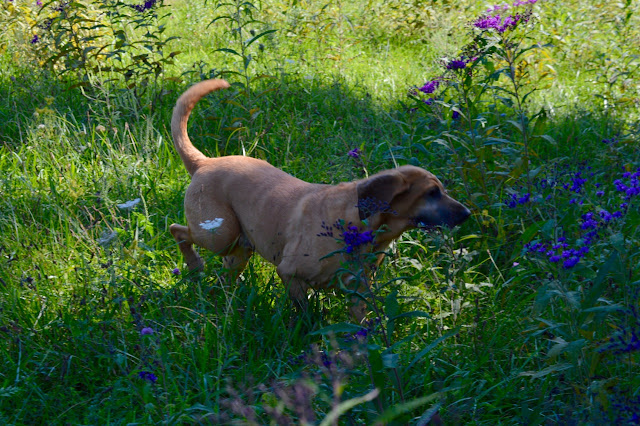 I thought I could still hear Stella howling so Sadie and I continued to walk through the weeds toward the northwest corner of the field. Luckily not soon into the walk, I turned around and Stella was behind us and was already heading back to our path. 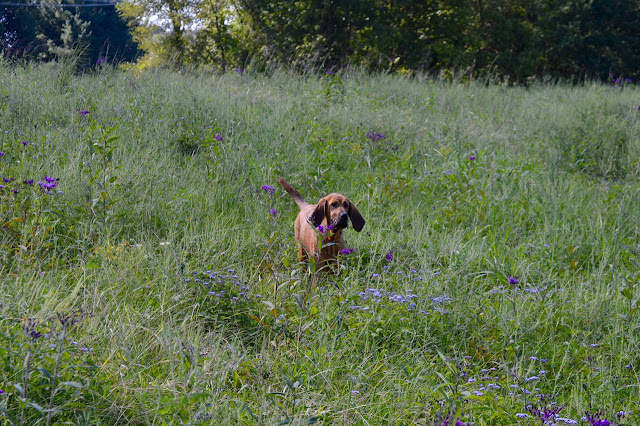 They love chasing deer although it doesn't happen a lot. I think this is the 5th time this year. They are always so proud of themselves after they return from their chase. 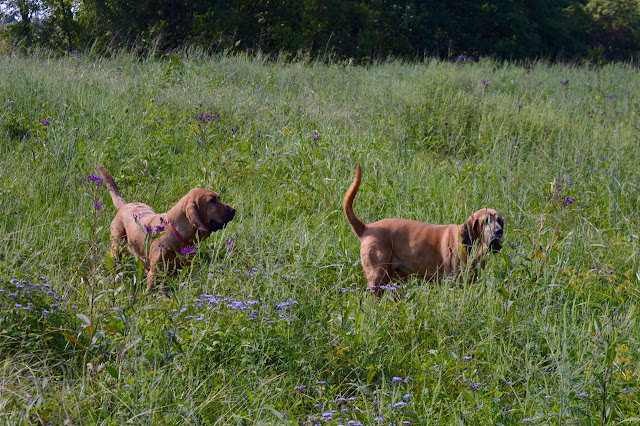 Stella was positive there had to be more from where that one came from and she was going to make sure she was not missing more deer for the day. 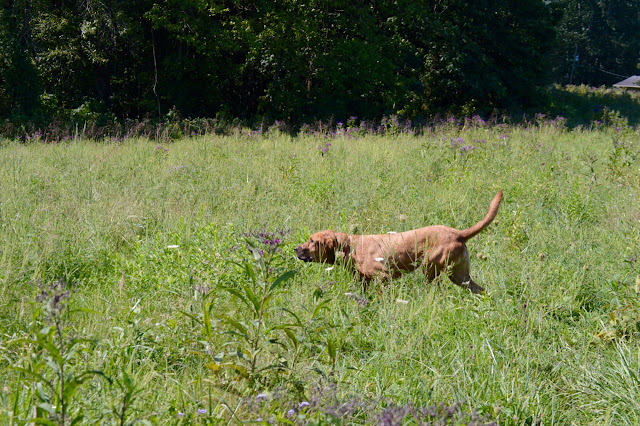 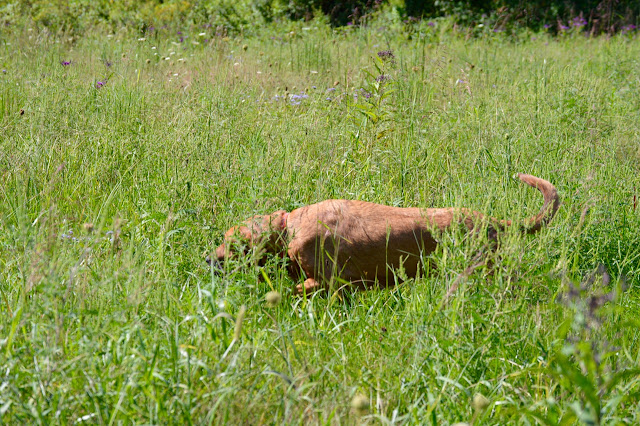 Once they figured out there were no more deer around, both trotted for the house. Just another normal day in the life of a bloodhound. Both were sound to sleep right after they got home and slept through most of the afternoon. 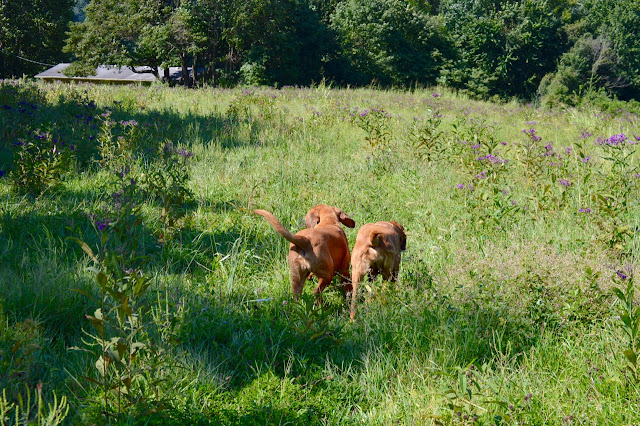 The last bindweed in the field, there use to be a lot of these. 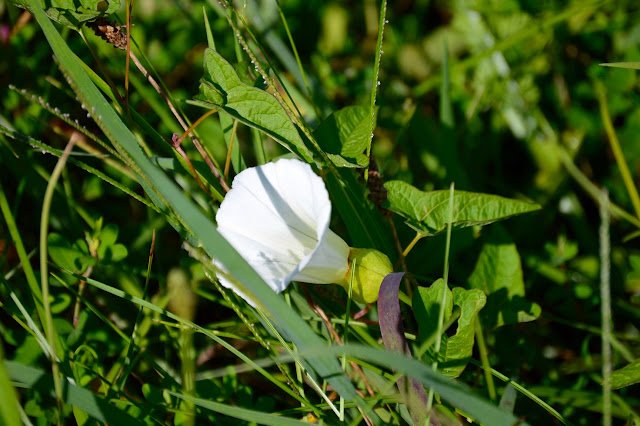 Stella double checks to see if there are deer near her house before returning inside for a mid-day nap. 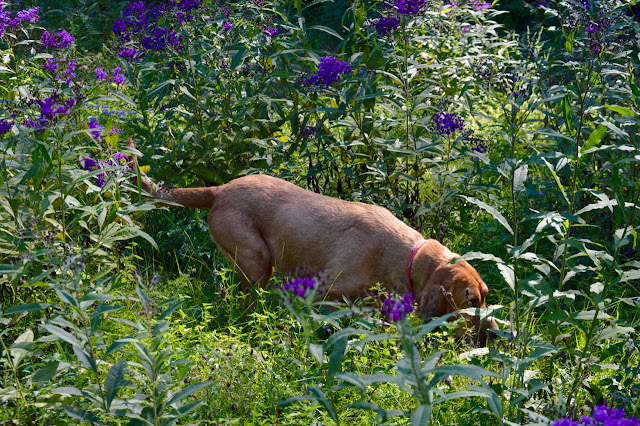 My 18-55mm lens mechanically failed yesterday. At the time it would not focus. Later it started making a plastic grinding noise as I tried to turn the adjustment to a different length ... 18, 35 or 55mm. It was not the first time for this camera to do this. I've been thinking for a while to buy a lens that had the range of both of the ones I had ... to eliminate having to switch back and forth between lenses.

I didn't want to buy another camera just to hold and use the different size lens. ZippyPinHead had talked about a 16-300mm lens he had bought and really liked it. I haven't found many times I need a 300mm but they did have a model that was a 18-200mm and that range would cover what I have now between two lenses.

I ordered it late last night and received a tracking number this morning after it had shipped. It should arrive soon after the Labor Day Weekend.

Today was once again too nice to stay inside. While I sat in the shade next to the house, the hounds ... even Heidi soaked in some sun. 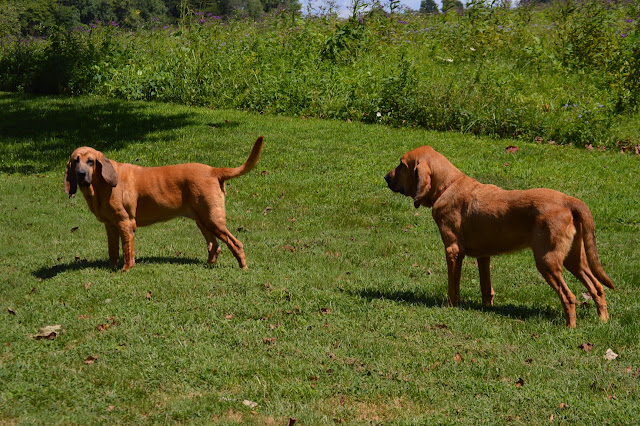 Of course Sadie spent all her time roaming the field, she doesn't have the patience just to lay there. 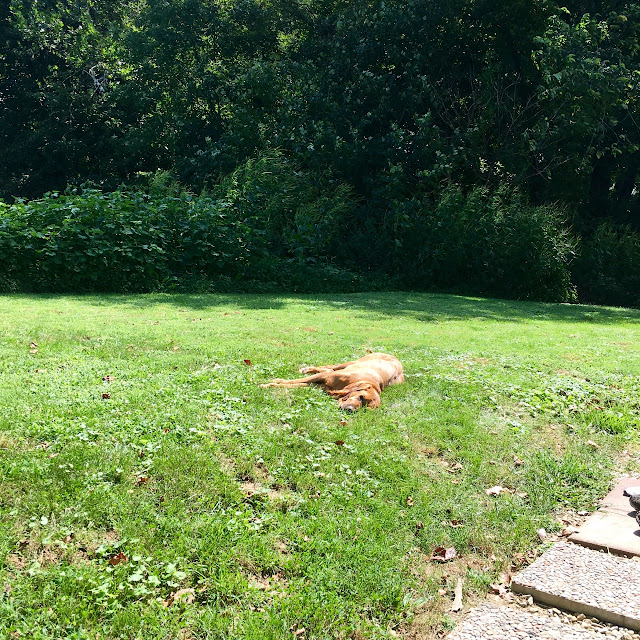 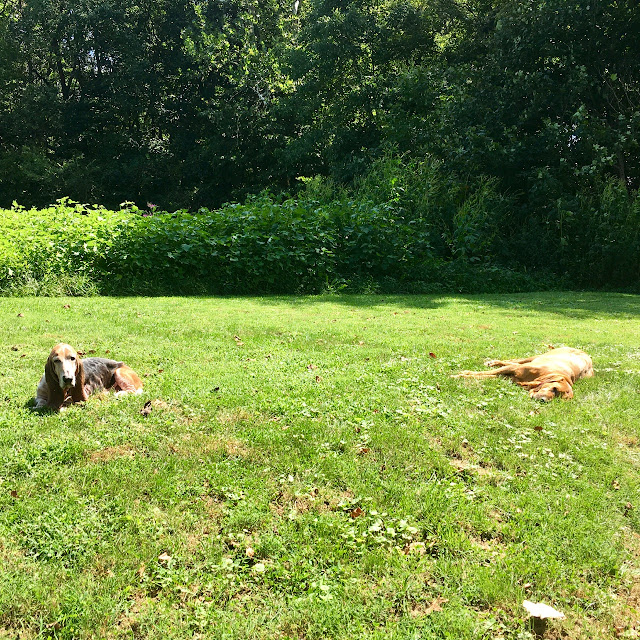 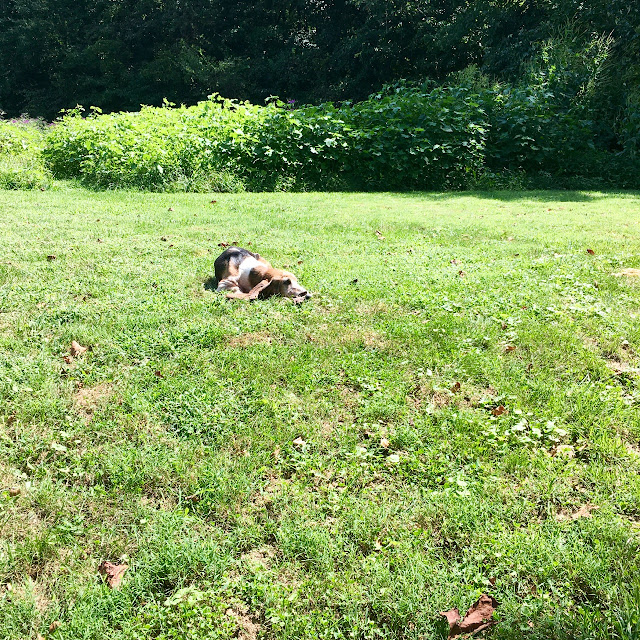 Stella ended her time with some dirt eating. I wonder if that is good for dental hygiene ... doubt it. I guess her nose dirt will have to wear off, since she doesn't let me touch it with a wet cloth. 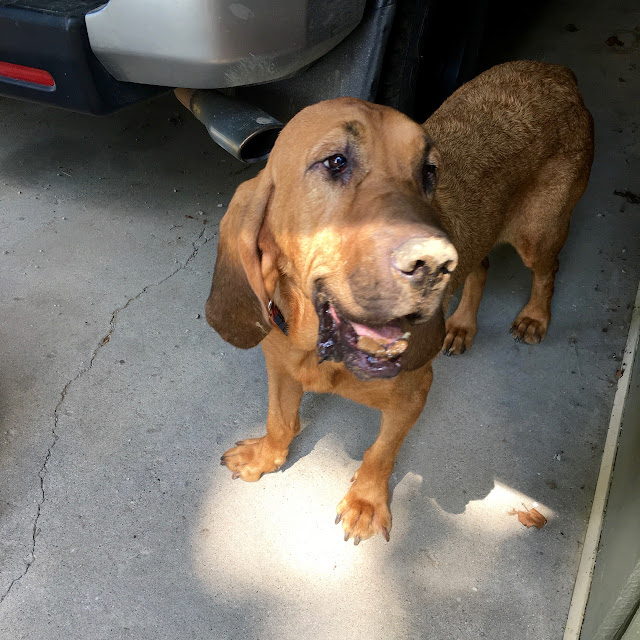 By 4:30pm it was time for the 2nd walk of the day. Both hounds were excited as usual. No deer this time ... just walking. 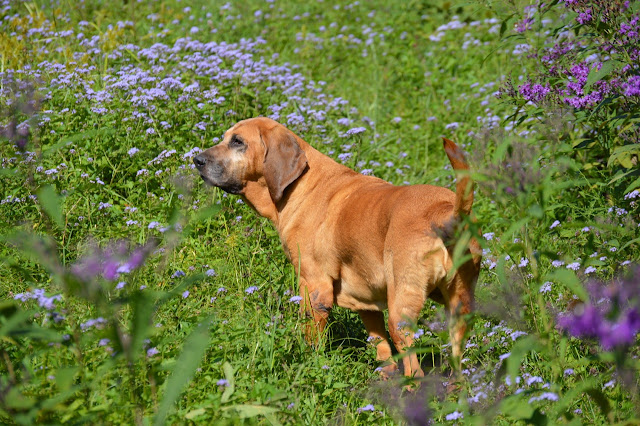 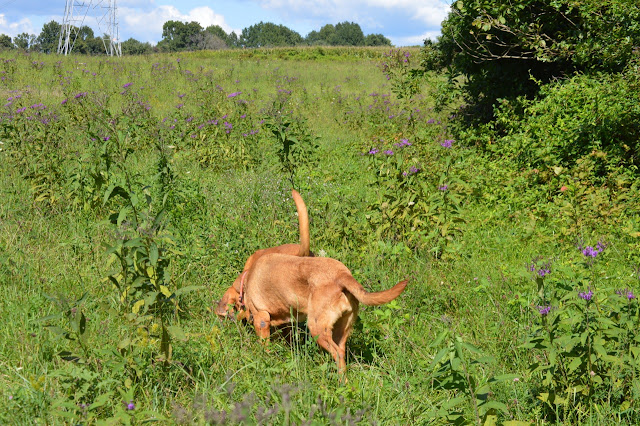 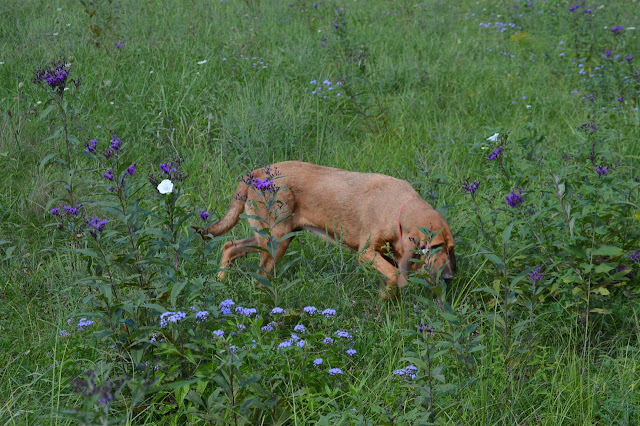 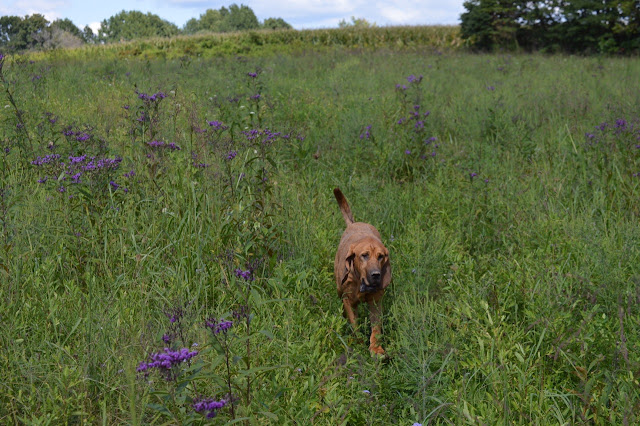 It was suggested to use Google Photos to store all the photos I take with my iPhone by the people that sold me the phone. I aways download them to my hard drive which still has a lot of space left on the hard drive. I am going to read more about Google Photos before the next football game tonight at 7pm.

I have used Flickr, which is free for unlimited amount of photos. I can go back to that but it takes so much data I have to wait until after midnight to take advantage of my Exede free data between the hours of midnight and 5am.

I see that Flickr and Google Photos have an iPhone app plus their desktop version. From the short reviews I just read, people favored Flicker. Since I like to play around with computer stuff I think I'll try Google Photos.

Although my computer automatically backs up the iMac hard drive every hour on an external hard drive I still like the thought of having photos and documents saved online somewhere.