The Hounds Get 2 Walks Today 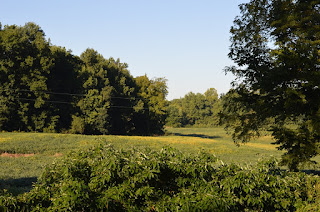 A nice surprise to have cool temperatures today. We will have a few hot days in the next month or so but days like these are great to have.

Even with the heavy dew still visible we took off for our first walk of the day. Since it was after 11am, sunny and not a real great time to take photos, I decided to use my lens hood that came with the Tamron lens. I've never used them before but thought I'd give this a try to see what the results were. So these morning photos are 'under the hood'. 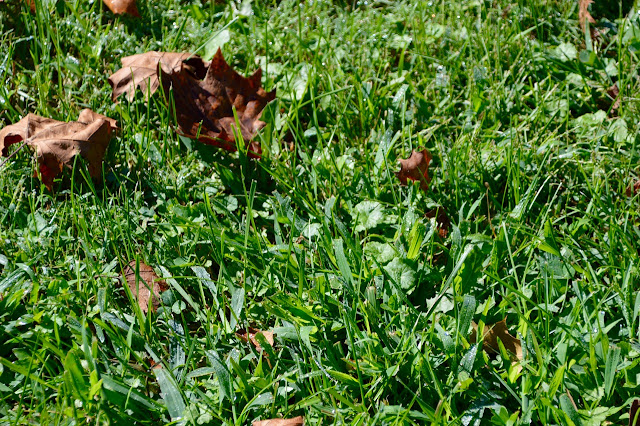 As fast as the hounds took off I was sure deer were in the area or had been in the area. Sadie and Stella had their heads down and tails up as they trotted along worn grass where the deer have walked. 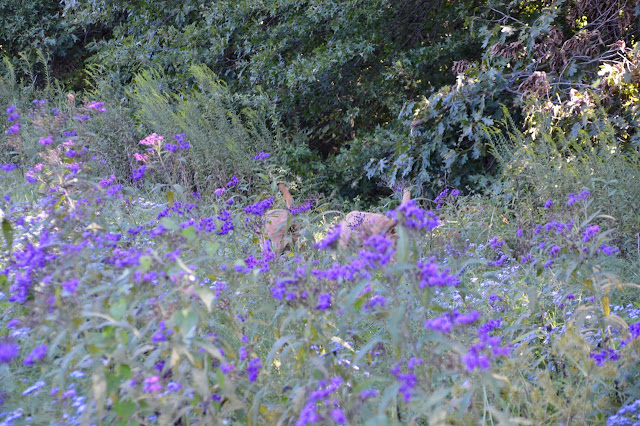 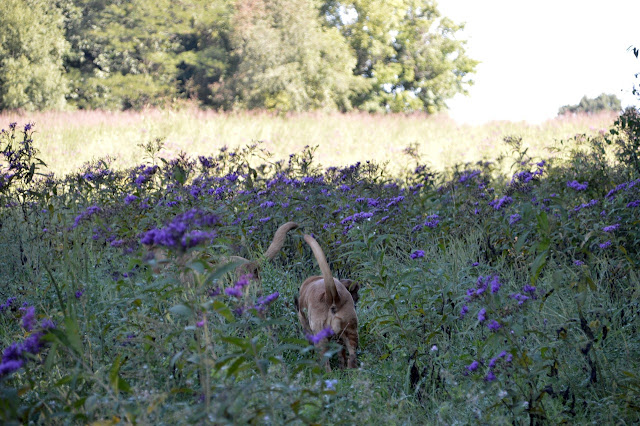 By the time I got to the first turn, they were both way out in front and almost to the back of the field. Yet, I didn't see anything that would cause them to take off. 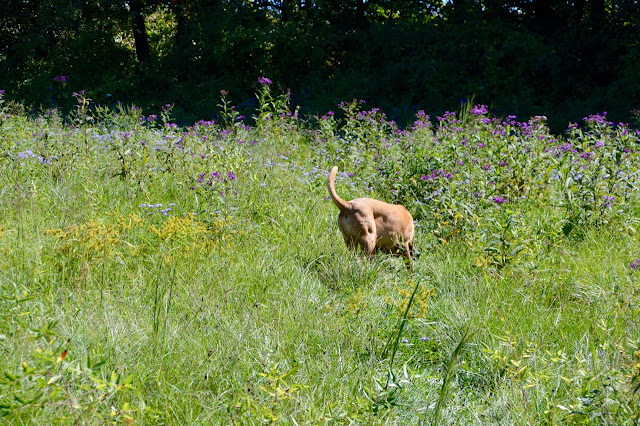 Stella was pretty keen on the left side of the path and different times would stop to sniff the air. Just as quick she took off running to catch up with Sadie at the back of the field. 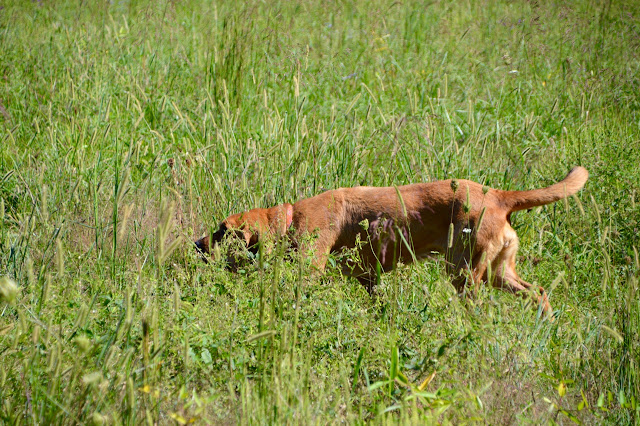 Sadie and I had almost made the turn to head home when Stella saw us and ran to catch up. By their nose activity there had to have been a lot of fresh deer scent, possibly from just this morning. 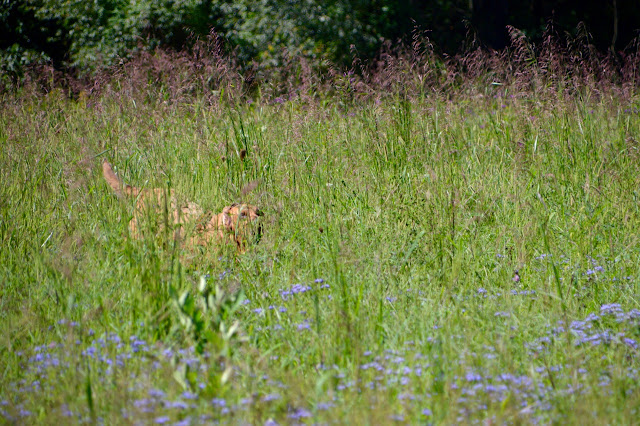 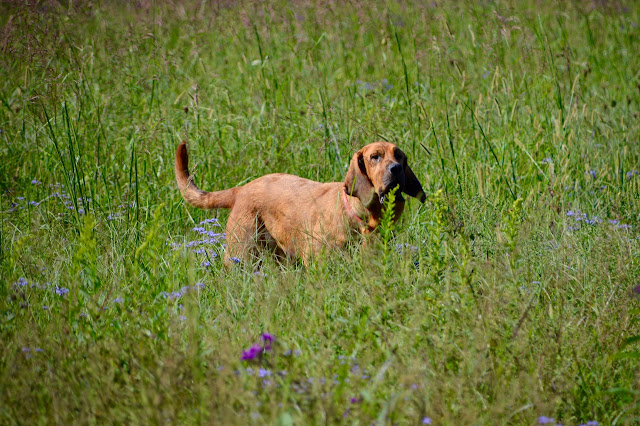 At this point, by the way Stella was looking, I was sure she was about to take off sprint. I have to remind myself even with that kind of look from her, it's not what she sees but the scent she smells and just how powerful her nose is. 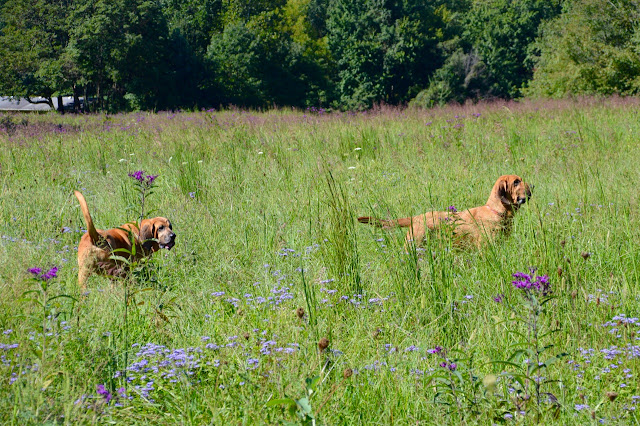 Instead, she turned with Sadie and headed home on the path I was walking. 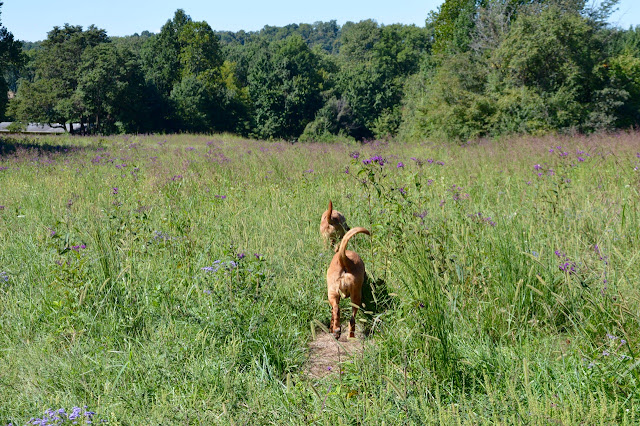 These are not going to last long. Just in the past 18 hours I had seen a lot of the purple flowers had dried out and died. So fall is hear and all of this landscape is in the process of changing. 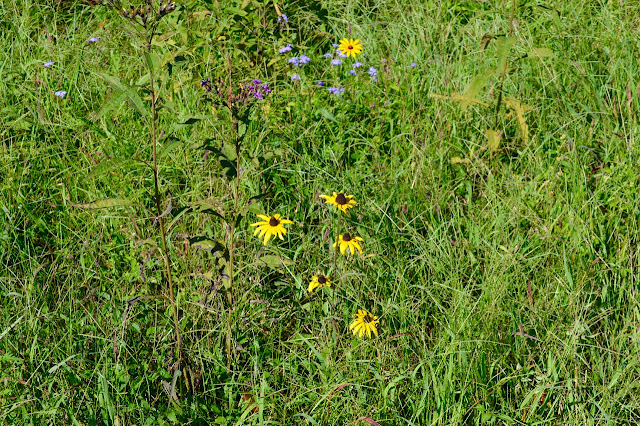 Heidi greeted us when we got back. She was sitting in the sun next to the house but needed to sniff Sadie and Stella when they returned. I can see in this photo where the lens hood had an effect because the drive is never that dark in the middle of the day. 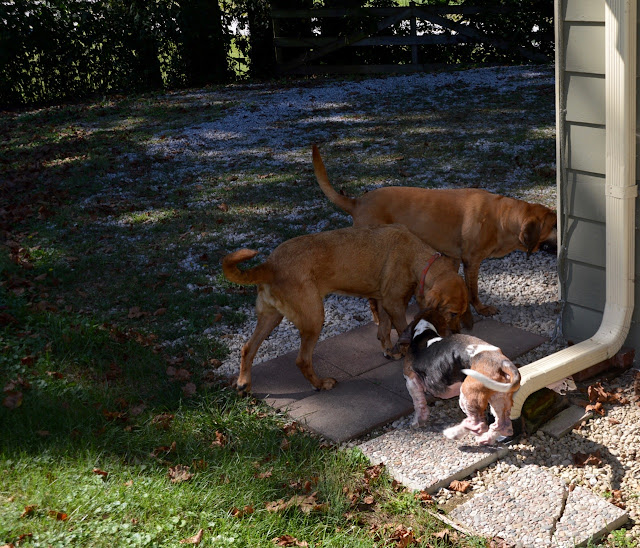 After channel surfing during the commercials of the football games I was watching, I could see again today that we would walk at halftime of the game we were watching. Today that was the Colts game. I did not use the lens hood on the following photos. 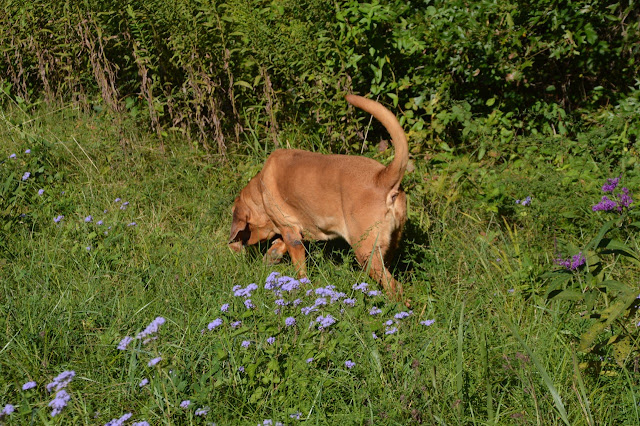 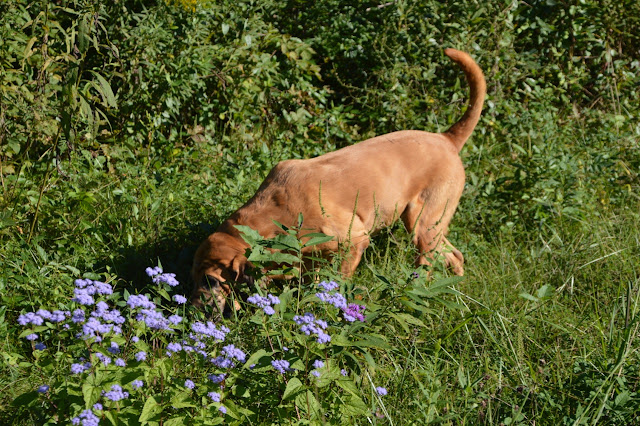 They did not start off as fast as this morning but their hunting was just as intense. Usually when they get two walks in a day, their pace is pretty slow for the second one. That proved to be true today. 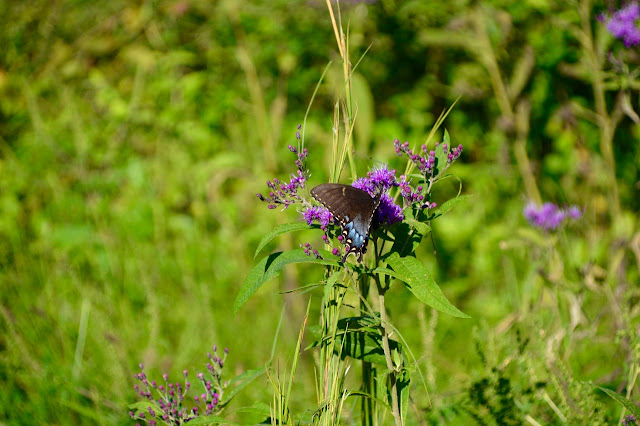 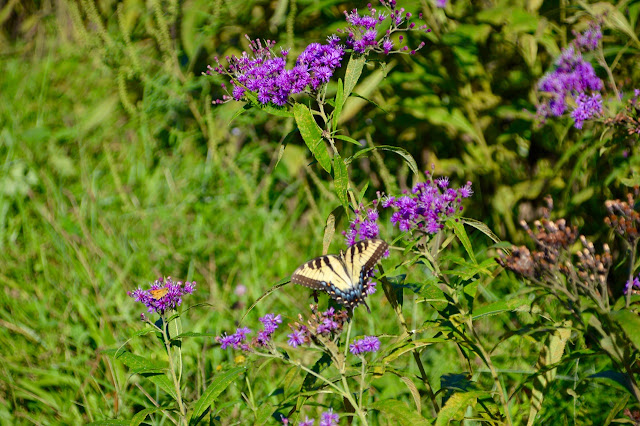 At a slow leisurely pace, we finally made it to the back of the field. Each time they got to far ahead of me, they would wait for me to catch up. They probably think that I am the one that is tired, not them. 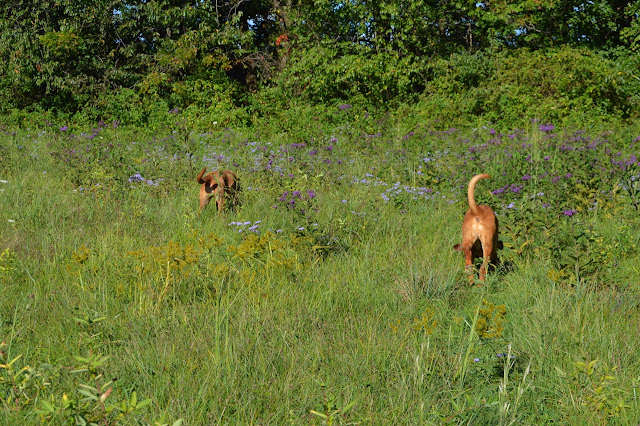 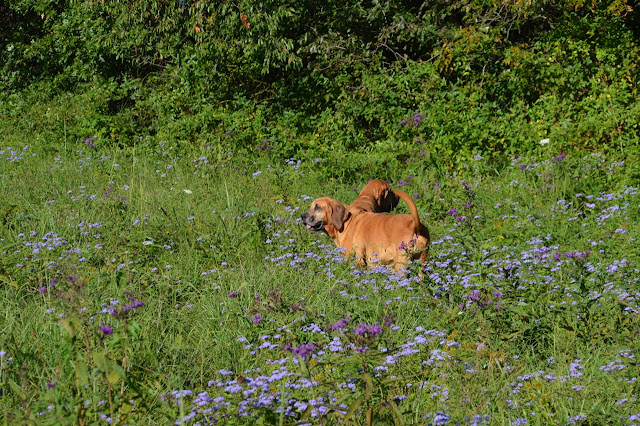 As you can see they stayed together this afternoon. 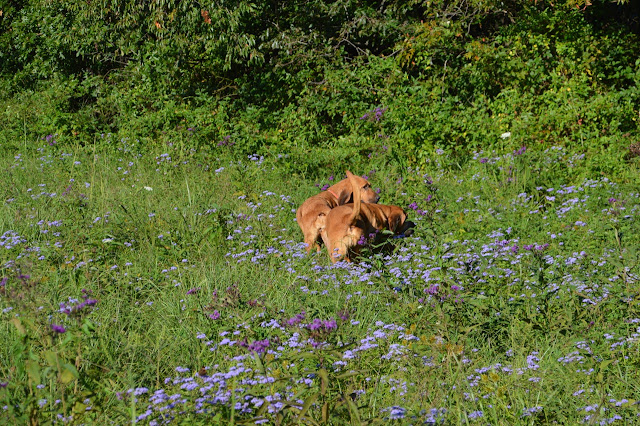 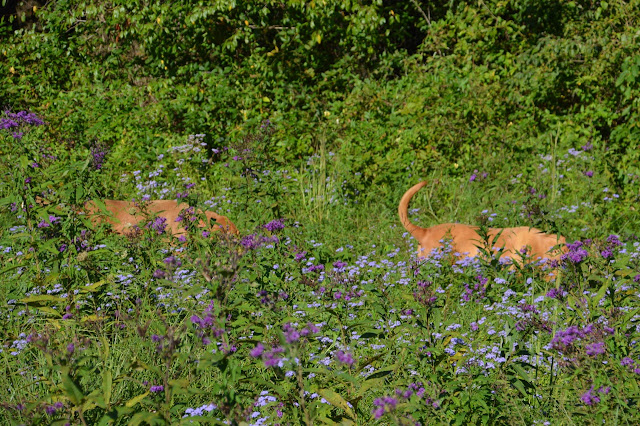 I'm wasn't sure if there was something wrong with Stella but she sat down suddenly on the walk back. She had not been running, wasn't panting, she just decided to sit for a minute. 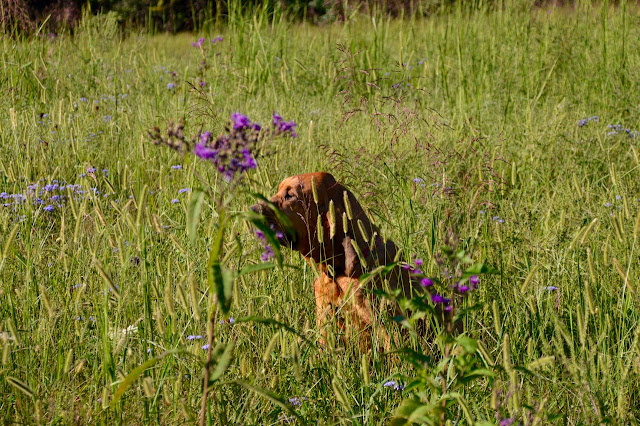 All was good and it was time to get back home and back to finishing the nap she was taking. 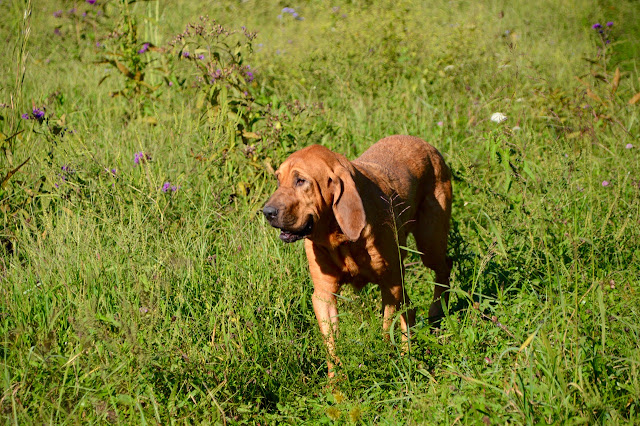 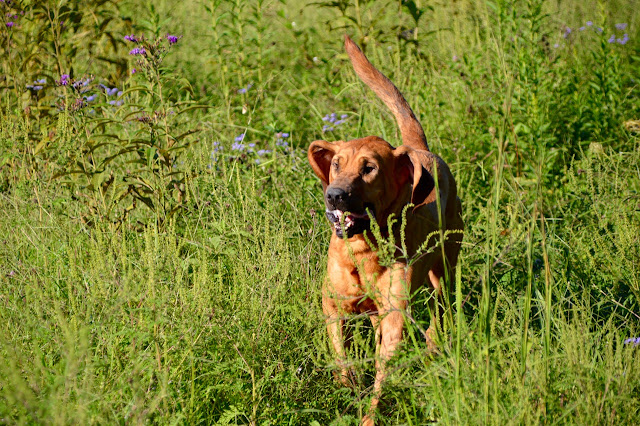 They both walked it into to the yard and slowly headed for the door. 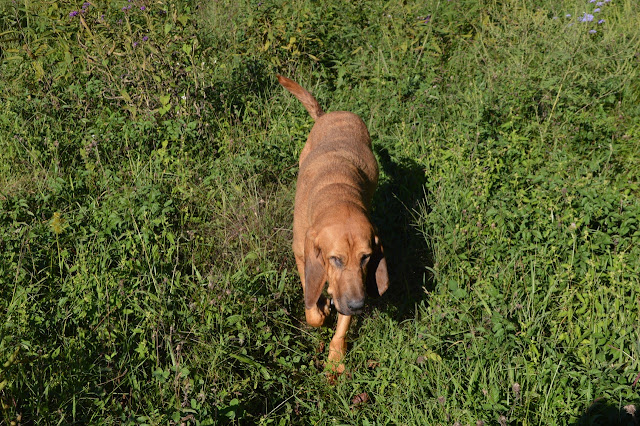 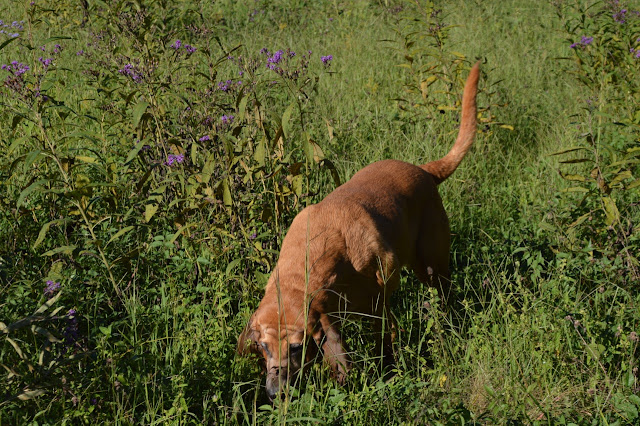 I think I can see a difference in the photos between using a lens hood and not. Of course it was a different time of day, different lighting but I like the photos without using the hood.

After the last game of the night, I'll be back to play around with Google Photos and Flickr. I did load all of the photos I took today, more than the blog photos, into Google Photos automatically but I doubt that I put them into their albums. I sent just a few good ones to Flickr.

It was a quiet Sunday here in 'the tropics' of Southern Indiana today.
at September 11, 2016