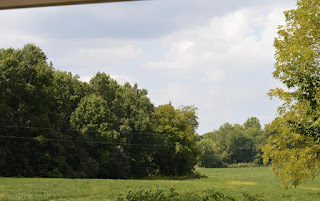 I guess staying up until 5am three nights in a row caught up with me. I did NOT miss feeding the hounds breakfast on 'their' time, around 7am ... but after that the day was a fog.

By the time I woke up, glanced at the iPhone clock, I instantly remembered my days centuries ago of working 3rd shift and sleeping through most of the day. I guess I finally knew what it was like for Sadie and Heidi during my days of working a job. Stella did not arrive until after I was a 'full-time doorman'. 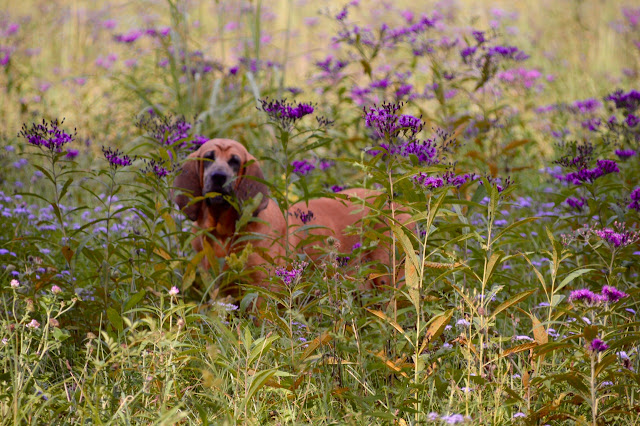 As I let the hounds outside there was a very exciting surprise sitting on my door step. My Tamron 18-200mm lens had shown up a day early and my brain cells suddenly charged. It now felt like I had been up all day. I fed the hounds their late lunch as I put on my shoes and socks ... because a late afternoon walk was going to take place with the new lens mounted on my Nikon D3200. 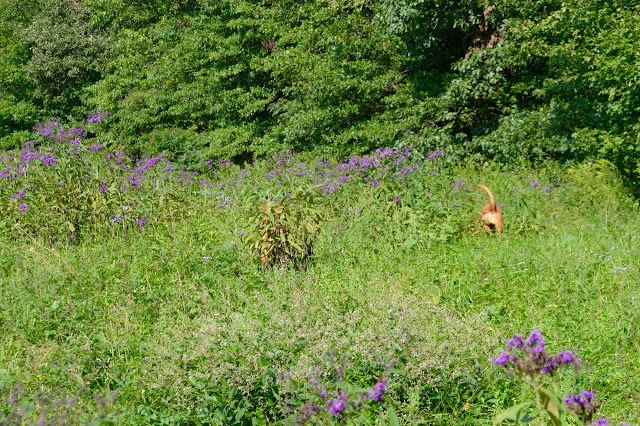 Before I go into details of the walk I will just say how nice it was to have a lens focus and shoot, first time every time. It didn't matter what the light was, or the distance, nor the camera setting ... it worked instantly every time. 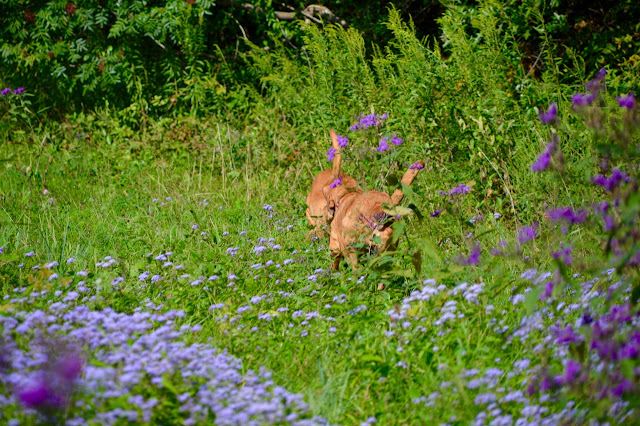 Another cool thing was being able to get shots from a distance (200mm) and when the hounds were too close to me in the past to get a shot in (18mm). It was also nice not having to switch lens for different times of the day where I would shoot different type of photos. 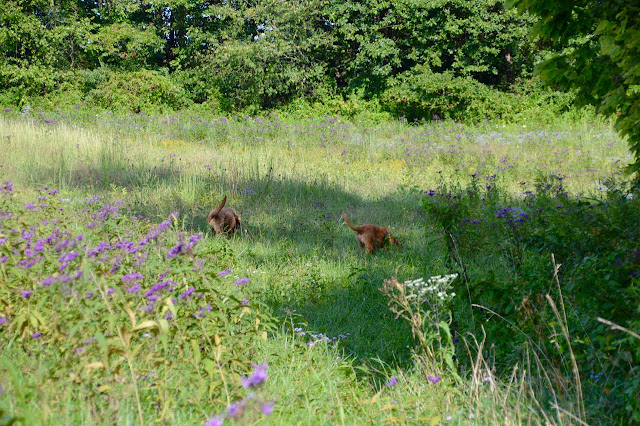 I could tell as soon as I took the lens out of the box how much different it was than the two Nikon lenses that came with my camera. It was heavier, moved more smoothly. It just felt like a better built lens. 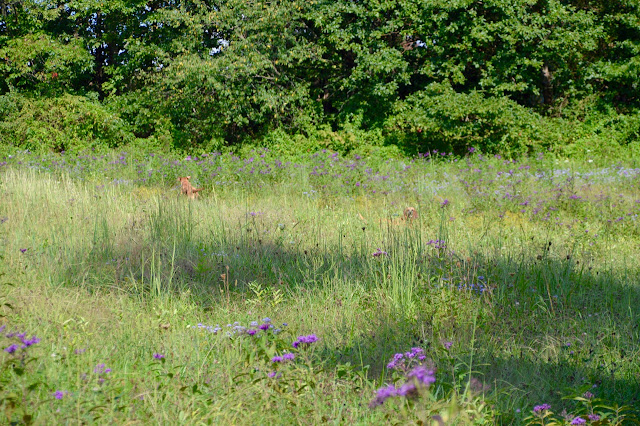 The hounds were as excited about their walk today as I was about my new lens. Right from the start they were both out ahead of me and at times pretty far ahead of me. When Stella took off running fast enough that her ears were in the "wing back" mode I didn't think it could be a deer in that location nor direction ... what was it? 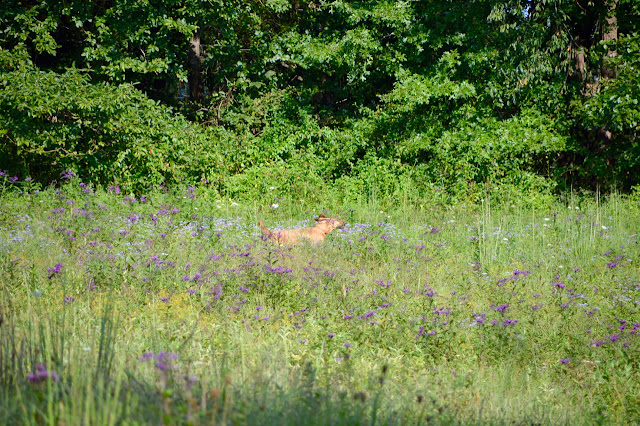 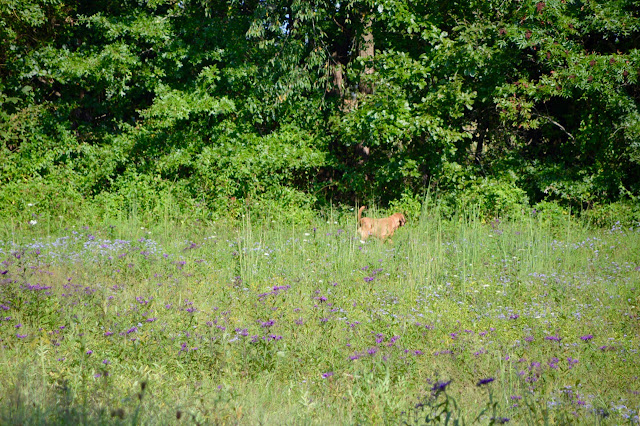 After a intense inspection with nothing showing up, the only thing I could think of was a rabbit ... but she had never reacted that way before to a scent of a rabbit. In the meantime Sadie is wondering if I am ever going to catch up and walk with them ... or am I going to lay back and take photos? 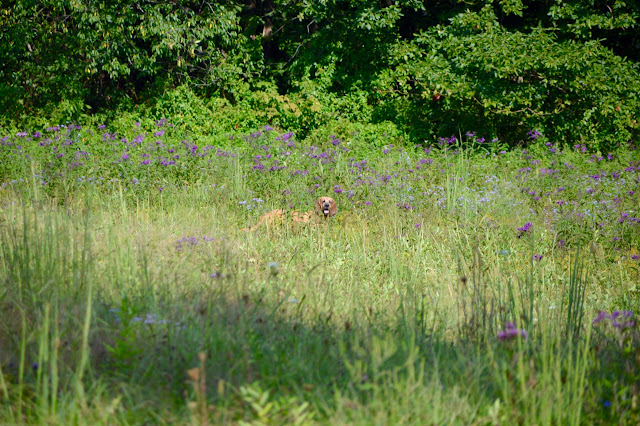 You can tell that the process of fall weather is in action even with the temperature at 88° during our walk after 5pm. 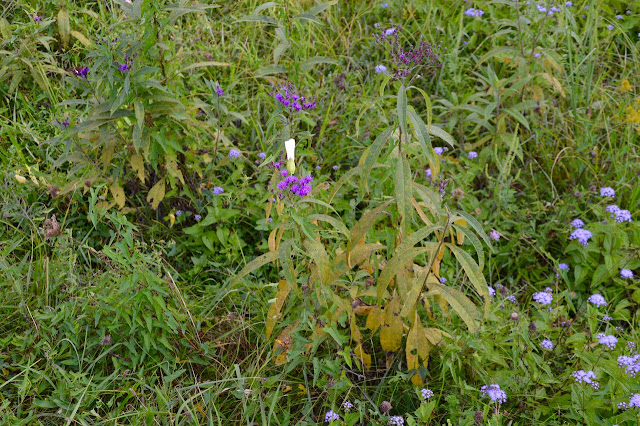 As I walked along the path, the hounds went back to their exploration and eating. The word eating makes you think that it must taste that good but the book I just finished said their eating was a way they identify what has been in the area. I don't seem to think that same way when I am chomping down one or two large borritos. 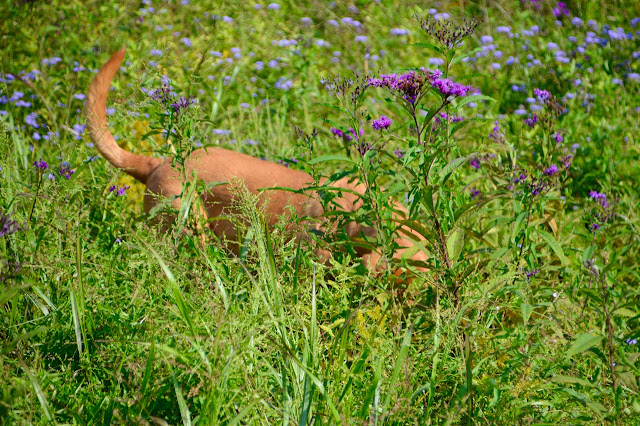 Stella looked up from a long distance away just to let me know she was not leaving just yet and was going to have Sadie join her for some help in identifying whatever she found. Which was probably nothing more than deer droppings. 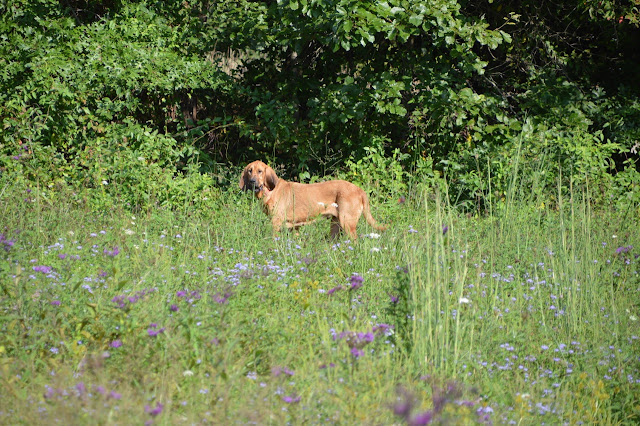 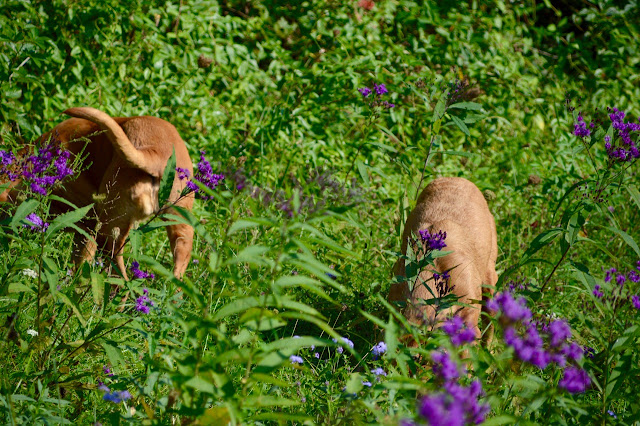 I was almost at the point to turn left and head home when I took this shot. I mention it because for many months I have not been able to get this shot at times due to the lens not focusing. 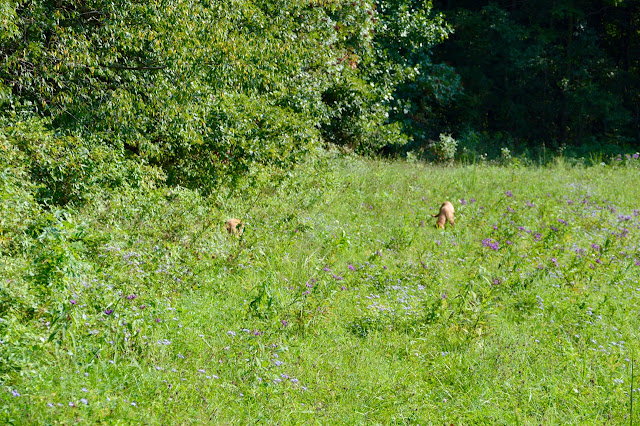 The BEST thing was being able to catch them running the full length of their run instead of just part of it due to the Nikon lens not focusing all the time. I should have clicked my camera faster because they were both running as fast as they could. 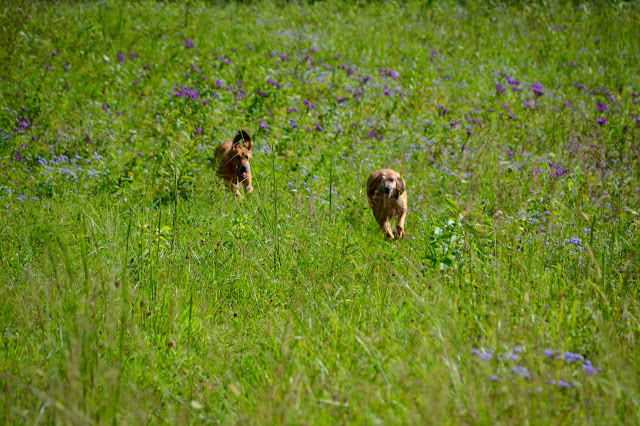 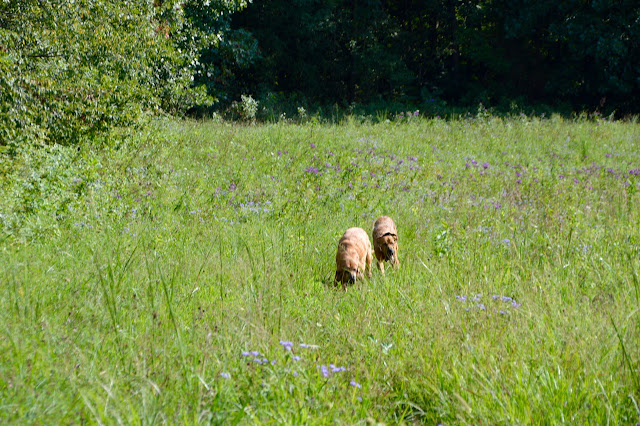 The final trot up next to me. 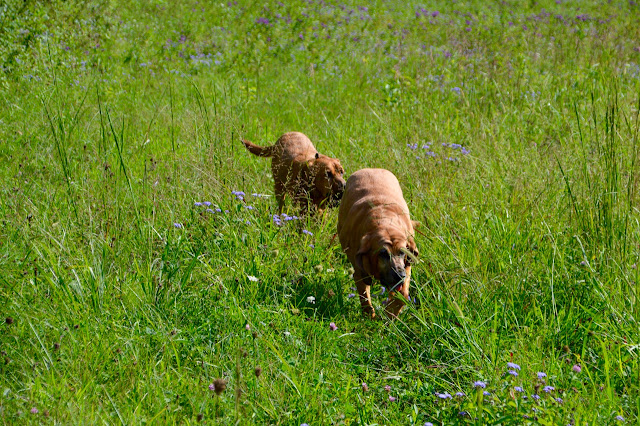 I knew since they had ran too hard in very hot weather (88°), they would be walking slowly the last half of the walk. Neither of them veered off the path I take very much and of course since Stella was walking right in front of me most of the way ... she walked as slow as possible. 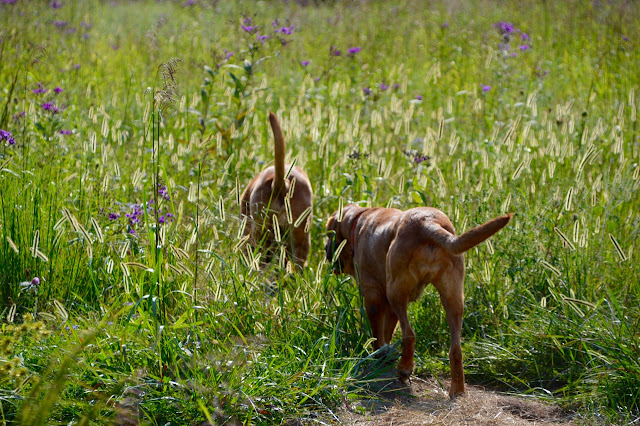 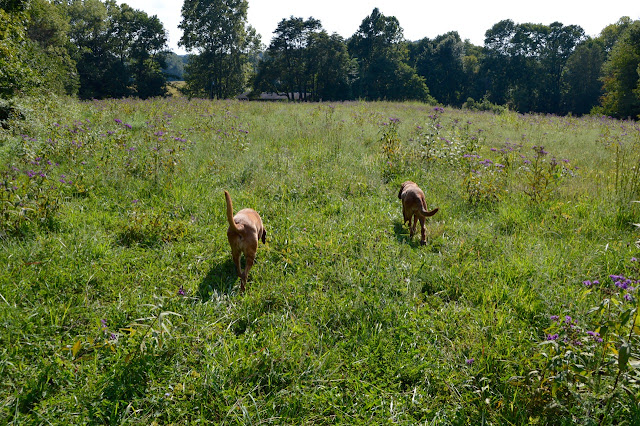 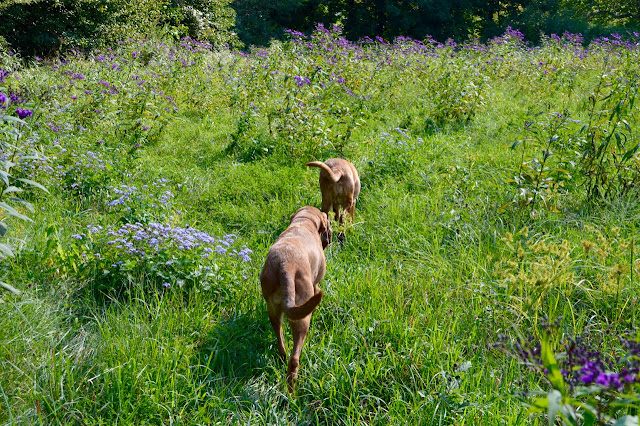 With tall grass, weeds or flowers one thing is always easy to see ... where the deer sleep. Someone had done some work to get their bed comfortable ... or was it one of those small UFO's that land on occasion? 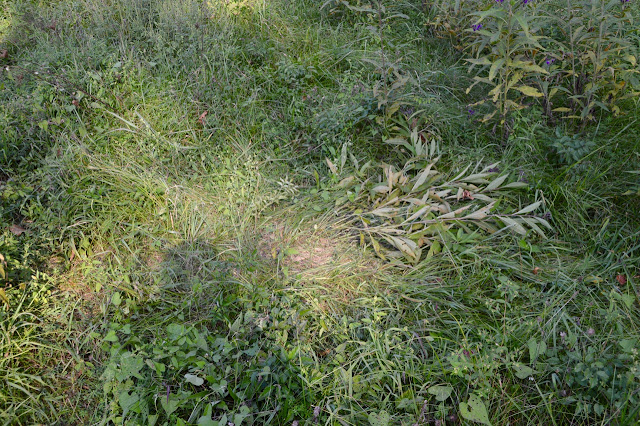 Stella was more than interested in finding out who it was, when it was and why were they so close to her house at night. With the bedroom windows open at night you would think she or Sadie would have heard this going on.

I took this next photo just to show how close to the house the deer sleep .. unless it was just a very small UFO. 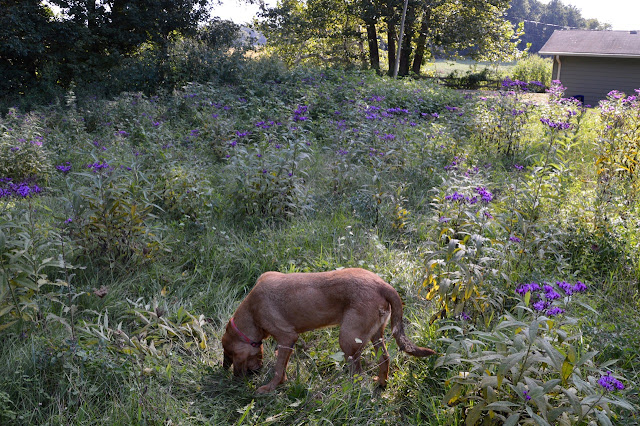 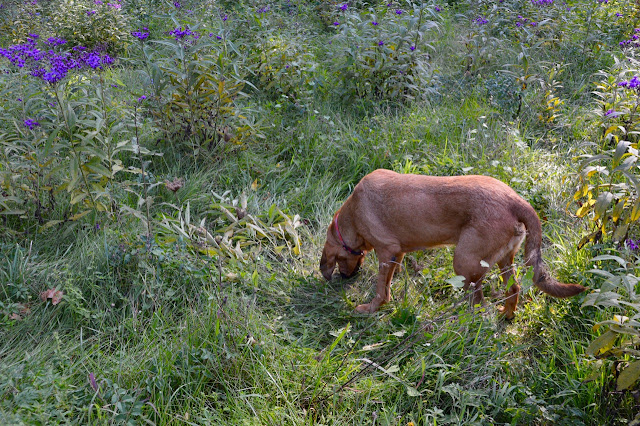 Needless to say, by the time I completed this walk today I can say I was in love with the new lens. In just the short time it took us, the lens had done everything I wanted plus it had the range to take photos when the hounds were too close or too far away.

For those not interested ... from this point forward I am only discussing Google Photos that I am backing up all my photos with online ... but ... there is some news announced in there somewhere.

I am almost finished with my Google Photos migration. I had a very productive night last night. I am down to just two groups of folders to upload with a total of 11,013 photos of Sadie and Stella. That count does not count the yesterday and today's ... but I will load those first.

Along the way I learned some of the new features Google Photos has. Each folder I uploaded has the ability for the user to choose the image they want for the "album cover". Yet there's one disadvantage that showed it's ugly self ... you cannot load more than 500 photos at a time INTO A FOLDER but can upload 1,000's at a time into the program itself.

So my plan of adding tonights 11,013 photos into Sadie's folder and Stella's folder and getting to bed a little earlier ... isn't going to work. The process turns out to be a little longer than just uploading the group of photos from the specific folder on my computer, letting Google Photos make that folder while I type in the folder name.

I have to wait for those 6,238 photos to load, then open them up and select no more than 500 photos at a time before I can add them to the folder. Luckily that selection process is easy .. click the first photo, then hold down the shift key as you move your cursor down the end of each row ... choosing the photos in that row, then clicking the last photos when the counter reaches 500. The lifesaver in this is in the upper left corner there is a selection counter working as you go so you can see when you hit 500.

There is not a way to click the edit menu, then "select all" in Google Photos within the group of photos you are working with. There is in Apple Photos.

I have all of my 60 individual folders loaded and labeled with that cover photo chosen. After Sadie and Stella's photos are loaded tonight I will be able to set the program up to work automatically. Meaning after a couple of changes to my settings, every new photo will be added automatically into Google Photos whether the photo is taken with my camera or iPhone. All the photos in Google Photos can be seen by whatever device you are using plus it does not matter if you are on a Mac or a Windows PC.

He had a point and one I had thought of many times before deciding to do anything "in the cloud". I'll not go into the plus and minuses of what to do but I am happy using Google Photos and the more I use it the better I like it.

Yet ..... I had to try his suggestion. He had reminded me what I was going to do last year and didn't. I moved my whole photo library, about 22.4 Gb's to an external hard drive in 2 hours and 47 minutes while I was watching the Florida State vs Ole Miss football game.

Pretty nice eh? No staying up all hours of the night ... just 3 short hours all of my photos were neatly tucked into a desk drawer waiting for the next update that will not take as long.

Still ... I really like what Google Photos does. One thing I caught myself doing last night while waiting for photos to upload .. was looking at photos and seeing them just as good if not better than when I look at them on my iMac in Apple Photos. I like the format.

I also like viewing them in my Flickr account but not all of my photos are there ... the two programs are very similar. I have found that Google Photos is easier to work with than Flickr when editing photos and organizing them.

If you have read this far through all of this rambling I'll let you in on a little secret change I did right before posting tonight ... I took the "RV" out of my blog title.  :)  Many hours later while reading a blog that normally has my blog on their blog roll ... it wasn't there. So I checked another blog and my blog wasn't on their blog list either. I looked at a third blog and my blog was gone on their list. So until further notice ... I have put the RVs back in my blog title.