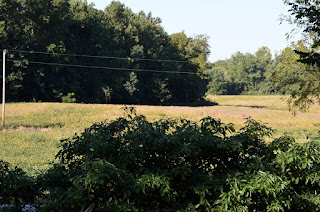 By the time Stella and I got to the house yesterday after catching Sadie next door, she already had that worried look on her face. She knew she had broken the rule of free roaming.

We all went inside for a little discussion. I discussed the pros and cons of "going that extra mile" where in this case that "extra mile" would put you in the highway and nothing good every happens when hounds are on the highway. She looked right at me while I was talking to her, so I think she understood what I was saying. Some would say that was just me wanting her to understand ... still her actions said otherwise.

Last night as we sat outside to enjoy the last of the good weather, she showed me (I think) that she really did understand what I had told her. Take a look at the following photos and see if you agree. Both hounds had free reign to go anywhere they wanted because I was outside. Not a word was spoken, to 'stay' or 'no' ... I just sat and watched ... with my camera making the most noise. 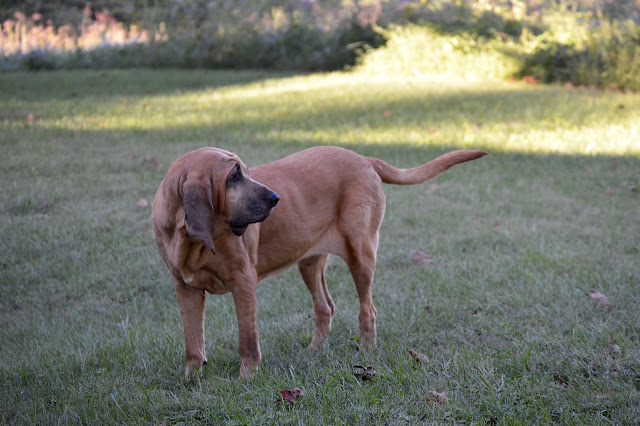 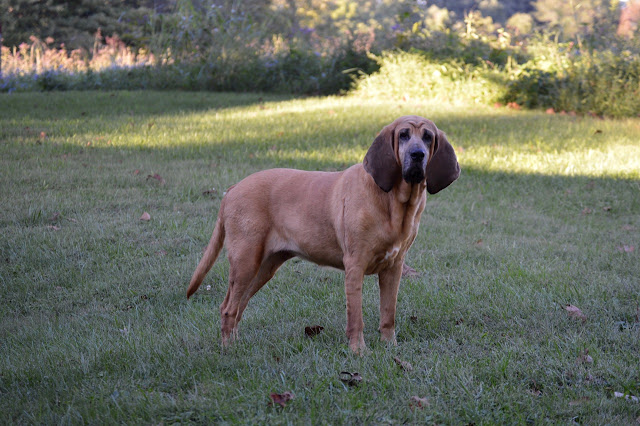 She is looking at Stella walking out into the field. 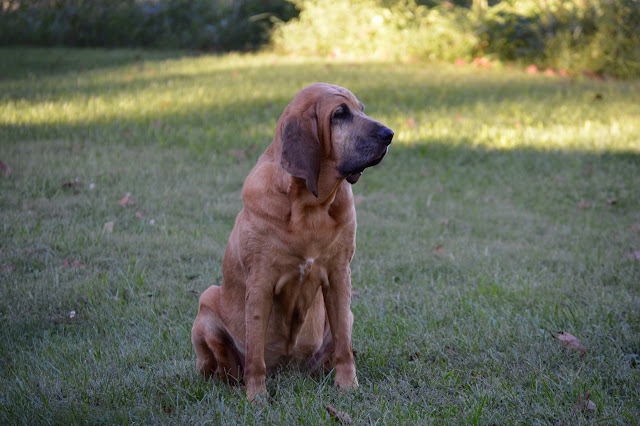 This photo has the look that she knows she broke the rules yesterday by running off to the neighbors house. She is pretty smart in her old age. 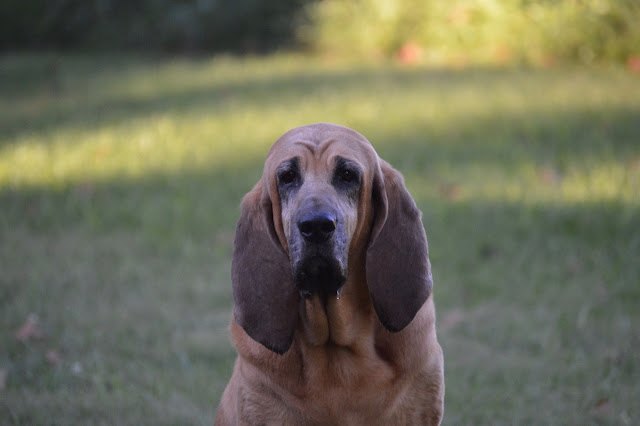 When she laid down I knew something was up. She rarely lays down in the yard by herself. I can think of only one time this past year, otherwise Stella has to do it first for Sadie to follow. 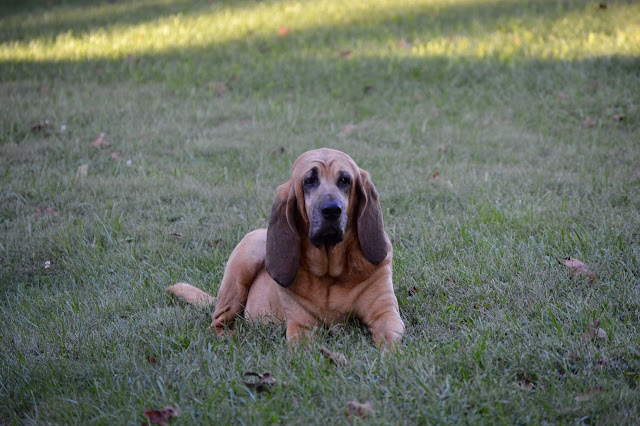 This morning while I was outside for the trip right after breakfast, I stood and watched them. Stella did the normal yard inspection then came inside while Sadie went straight out into the field to dump her tanks. She did not go anywhere near the north side of the yard.

Our mid day trip to check the weather and just how wet the field is, to see if a walk is possible ... Sadie was still in the mode of staying in the yard. Strange. 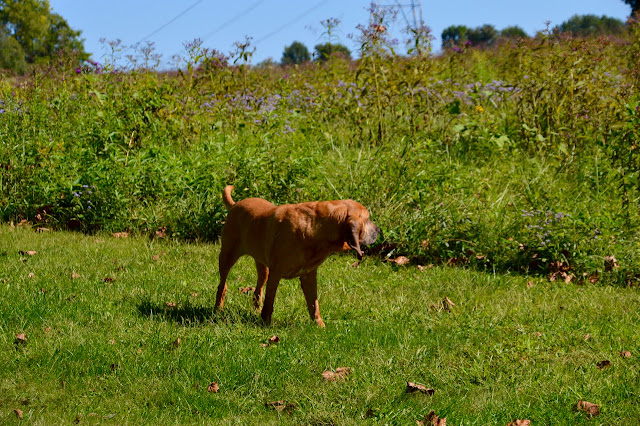 I was thinking last night trying to remember the last time Sadie took off for the neighbors. It was last fall on a Sunday morning when I let her and Stella outside for them to roam. Then when I went outside to check on them, both of them were next door at the same neighbors house. There was an ambulance with it's lights on backed up the driveway, with volunteer firemen (1st responders) along the drive. The hounds came sprinting toward me when I yelled their name.

So most likely Sadie saw the neighbors outside yesterday. That is something we normally don't see on our walks. Sadie must have decided to have some social interaction and went to introduce herself.

Before that it had to have been 6-7 years ago when she was a puppy. I would let her out in the mornings on her own before I went to work. One morning I go out to check on her and hear her baying ... she is next door at the house south of us ... the neighbor had some brand new rabbits in a cage for his young son. Of course the rabbits were a huge point of interest for her to take off to check them out. The neighbor wasn't happy, neither was I. 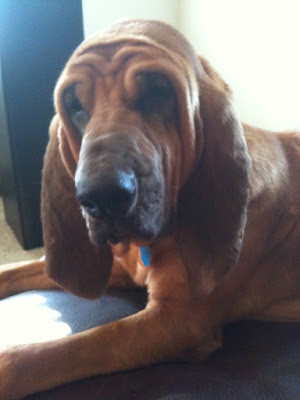 Sadie was a monster as a puppy ... too much energy to be left alone all day.

Other than that ... she has never left the field or yard. Oh, there was that time on a walk in December when she took off after a deer in back of the field. She and the deer jumped the short fence and she was sprinting across the corn field ... she came back a few hours later. I could not find her while driving my truck around the local area.

Overall though ... she has been great and still is. She knows she broke the rules yesterday.

It was still too wet to mow the yard in the shaded areas around 1pm. So we took for an early afternoon walk. Heidi made her daily noon appearance but still does not go near the field to walk with us. I tried to help her start but she turned around and ran for the house ... obviously didn't want to go. 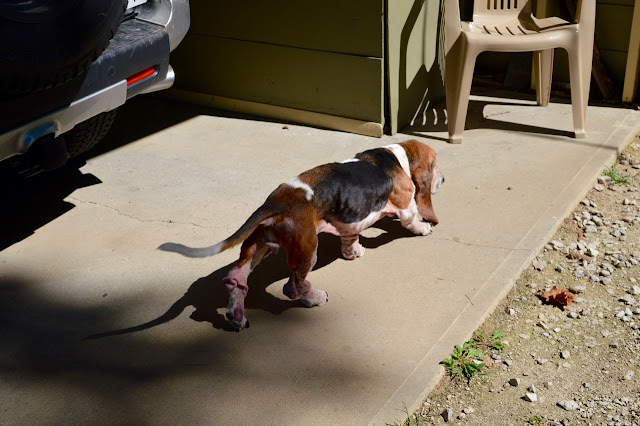 That's her skin a day after the 20 minute soak in epsom salts and a bath tub full of water up past her belly. 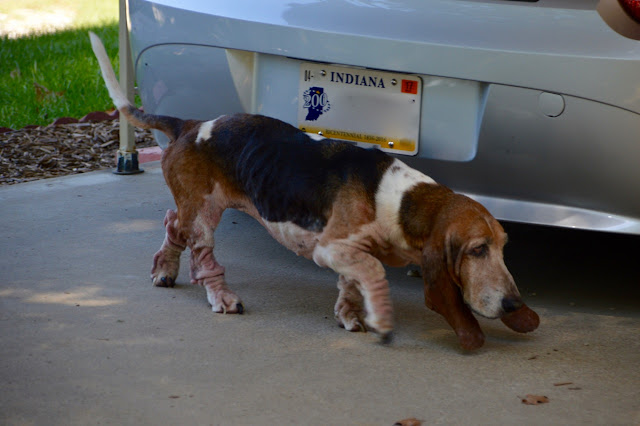 Since Stella didn't 'go' this morning she headed to the field after her lunch. 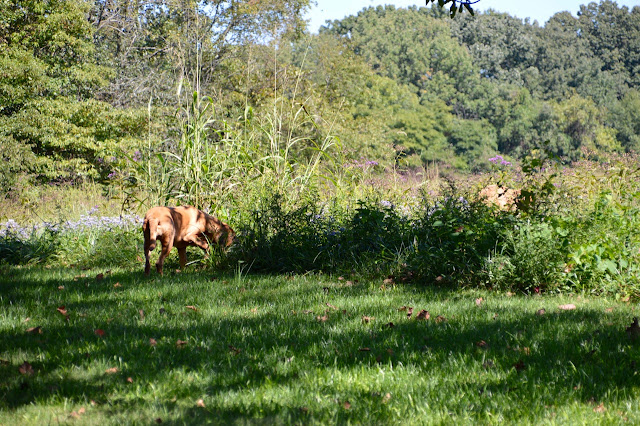 Sadie was just checking to see if it was okay for her to head in that direction. Pretty amazing how she is acting today. 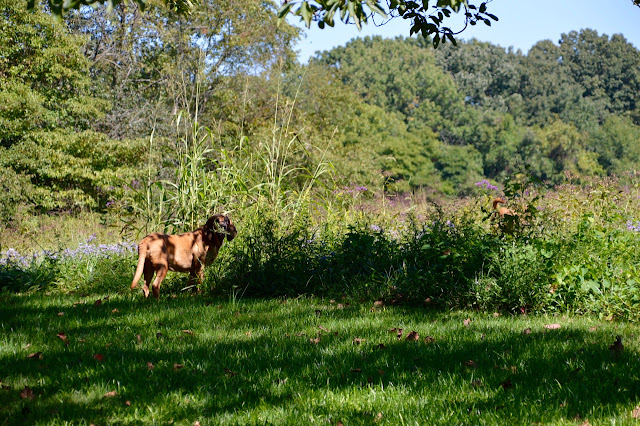 Instead I called her "lets go for a walk", she came sprint and Stella joined us soon after we started. Overall they both stay in the general area and came whenever I called them. 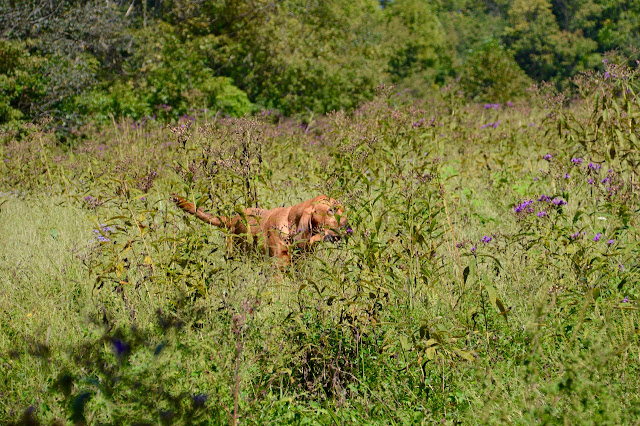 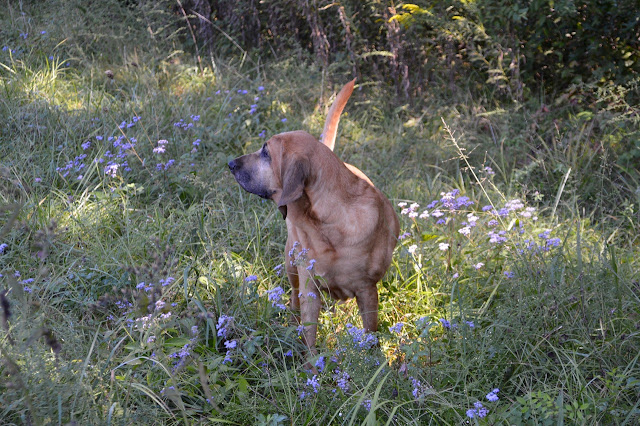 Sadie looking in the direction of 'her' scene of the crime yesterday. I looked to see what she was interested in and saw no one outside and nothing going on. 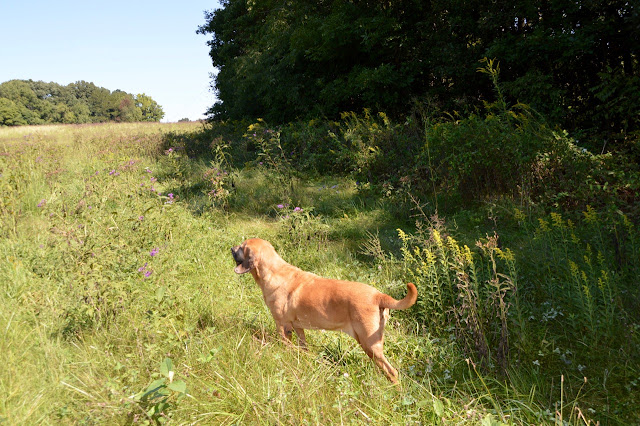 Stella got in some running to catch up to us before we got to the first turn. After they she and Sadie were on their way for 'the daily walk'. 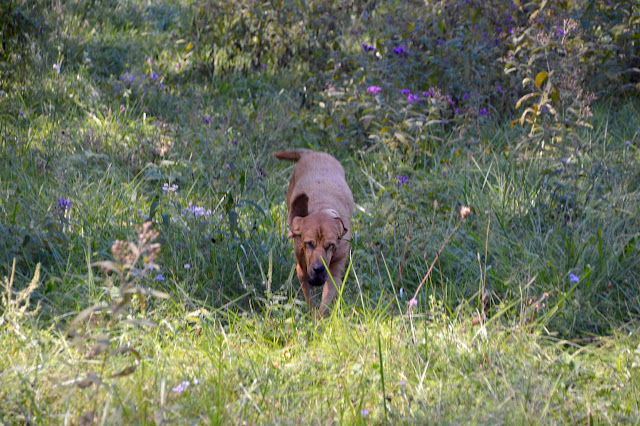 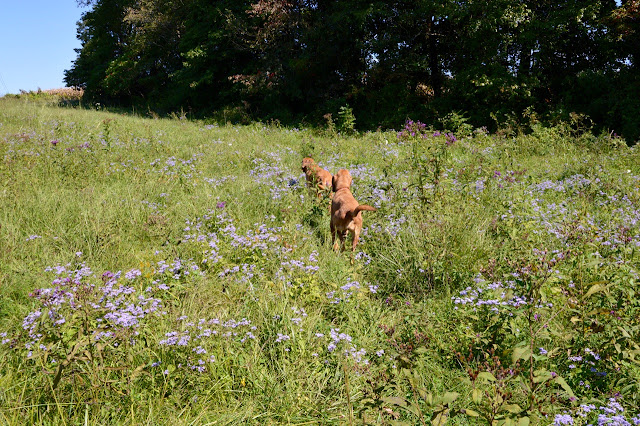 Since the day I brought her home Stella has always shown a laidback personality. She is a great bloodhound. 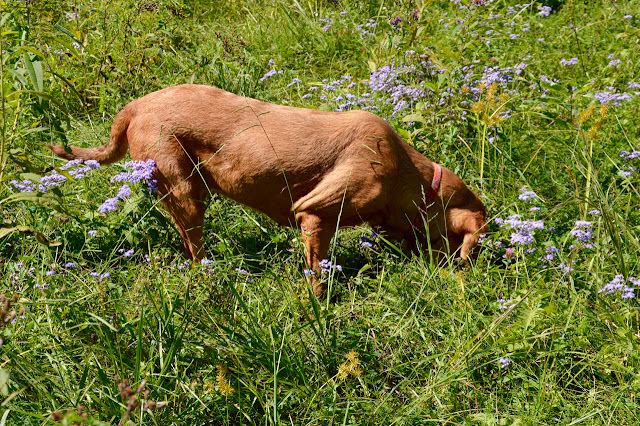 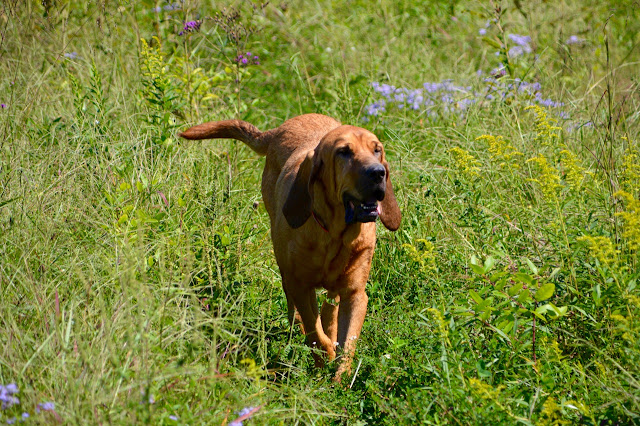 Although it was very nice outside today, it started getting hotter by the end of the walk and the hounds were anxious to get home and back inside. It was borderline whether the AC was needed. 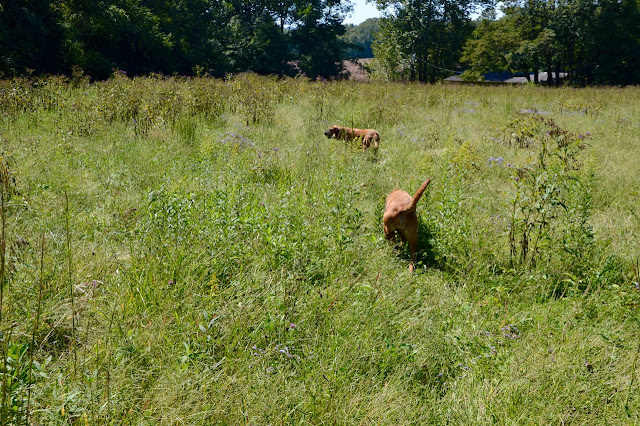 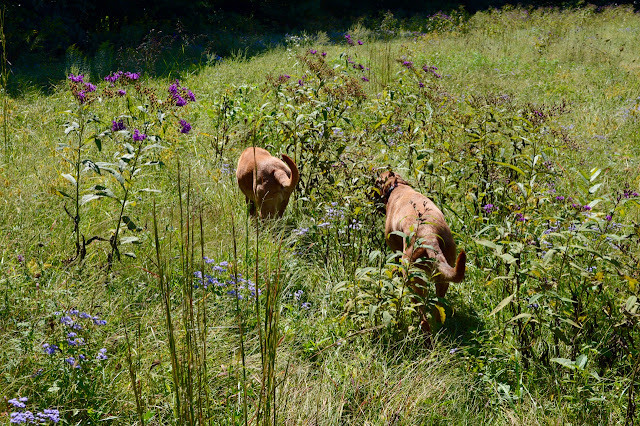 There is always something though they need to stop and check out. Even after they get back into the yard. 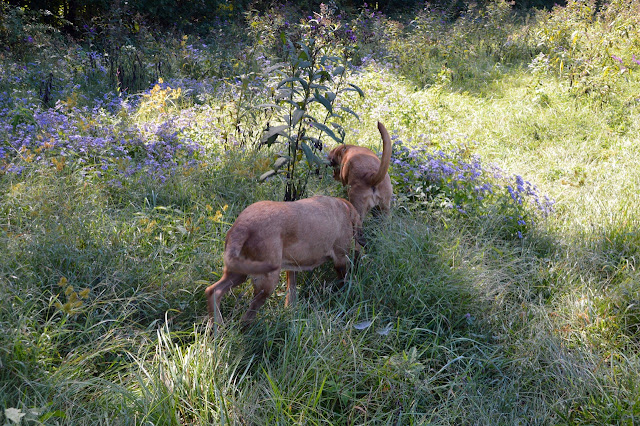 As we came into the yard, Heidi was in the shade waiting for us. 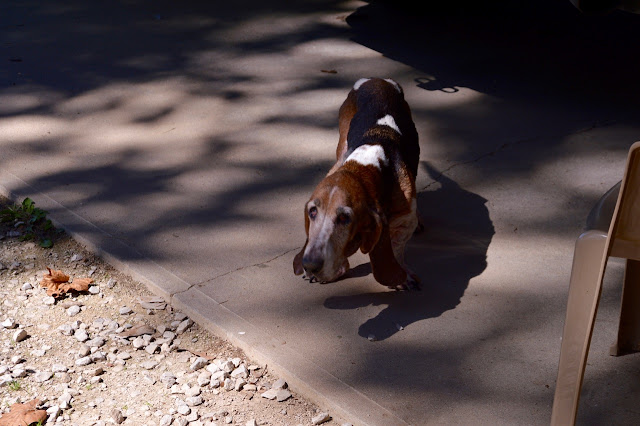 By 2:30pm it was dry enough to mow, a light breeze and an hour later I was done. The bloodhounds stayed in the backyard while I mowed, neither went into the field although Sadie tried a couple of times to sneak away. When I yelled her name over the sound of the mower, she ran toward me and away from the field.

While mowing the front yard I put them both in the bed room that gets the mid-day shade. Once again Stella stayed there without causing any damage. She use to sometimes so she is improving each time I leave her alone.

I usually power wash my house and hand wash all my windows in the spring. That gets all the dust from the fall, any winter weather off the siding and the house looks clean. That also gets rid of all the winter cobwebs. I might have to change that strategy. As you see, the spiders have been busy this summer and very recently this past week ... Will I power wash the house again before winter? 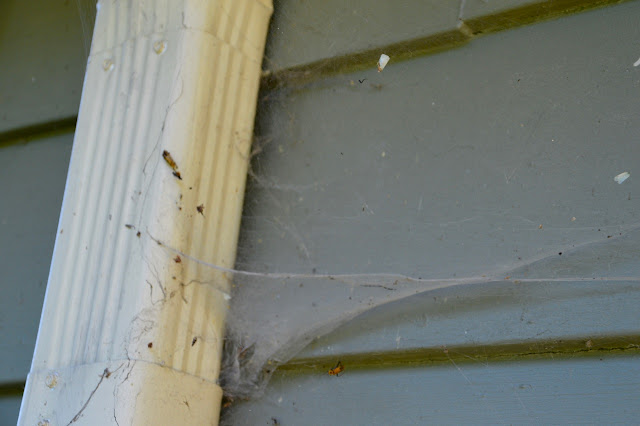 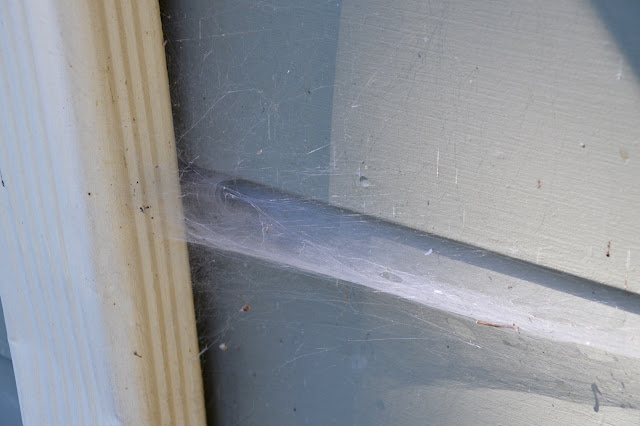 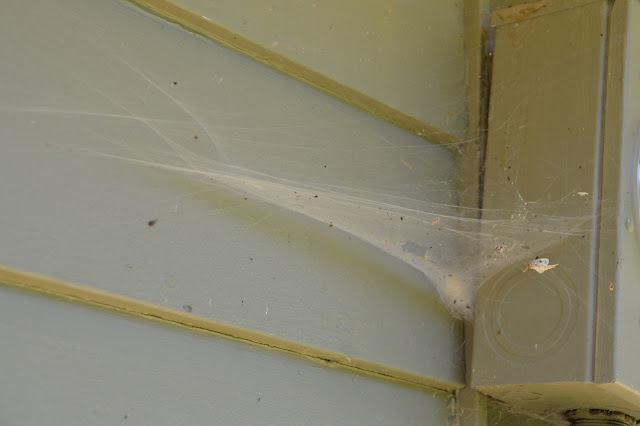 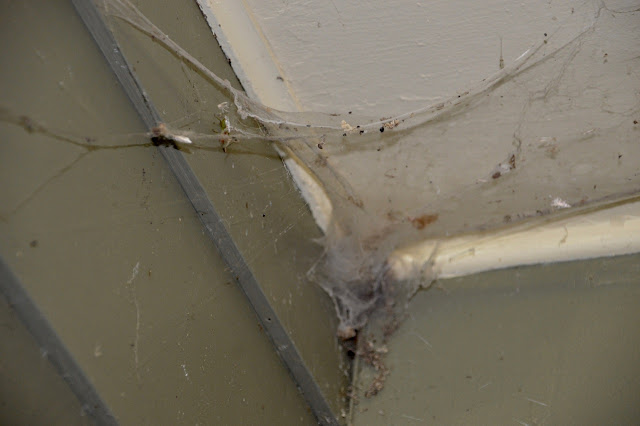 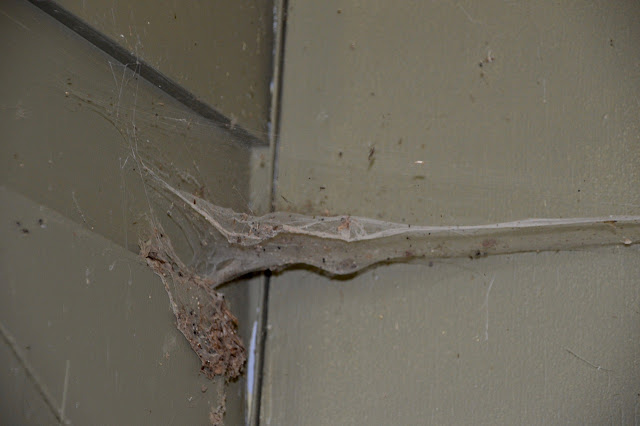 By definition most of these were cobwebs instead of spider webs. Either way, they are coming down. 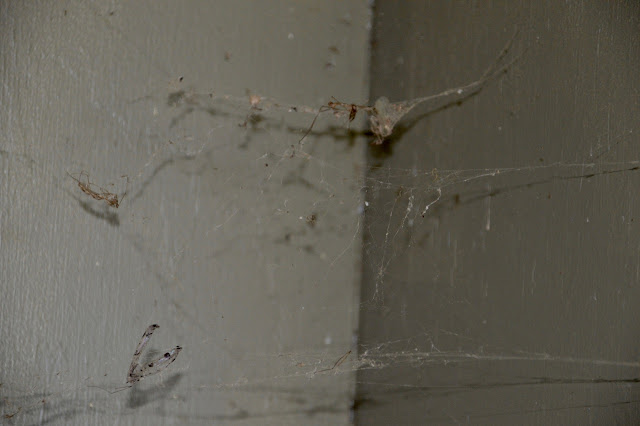 The temps said it was hot, my t-shirt shirt after mowing showed it wasn't that bad but Stella had her tongue hanging out panting, which was the sign the AC needed to be turned on, even if it was just for a short time. With them taking a late afternoon siesta, we walked again in the early evening but after this blog posted.

Great weather right now in 'the tropics' of Southern Indiana.
at September 20, 2016