Heidi Surprises Us On Sunday 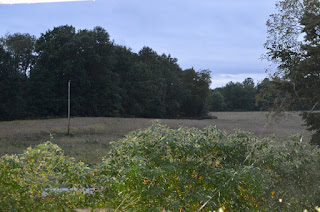 For once the local tv weatherman was correct. Much cooler temps after a night of rain while the hounds slept. While we got to bed early, we all woke up early to a light rain, overcast skies and the temperature at 60°

That's quite a change from the 70's in the morning and mid 80's during the day.

The hounds had a pretty good weekend, surviving another weekend of nonstop football, getting in walks in between games or at halftimes.

While it was a little sad to see all of the flowers gone, it was great to walk with the field cut and I could keep better track of where they were running off to. We thought about walking this morning but there was still a very light rain going on. 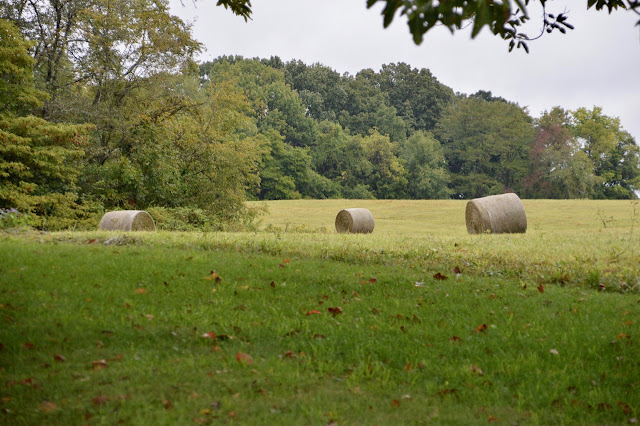 Stella's favorite is eating the wet grass after the rain. She does not vomit it back up so I can only assume she eats it because she likes it, instead of trying to settle an upset stomach. 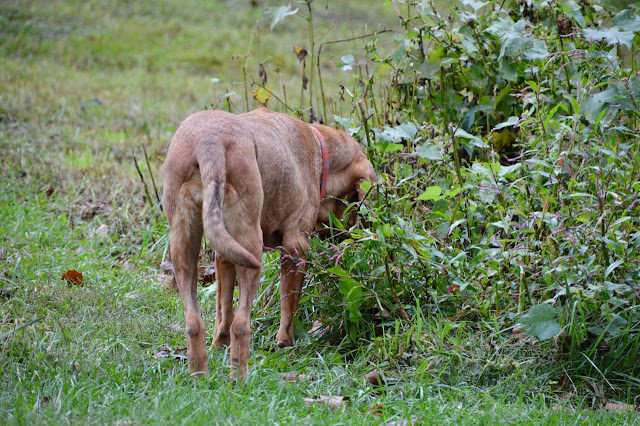 Even with sporadic big drops of rain hitting her, Sadie could not figure out why we couldn't take an early morning walk. She didn't hesitate though to head back to the house once it started raining a little harder. 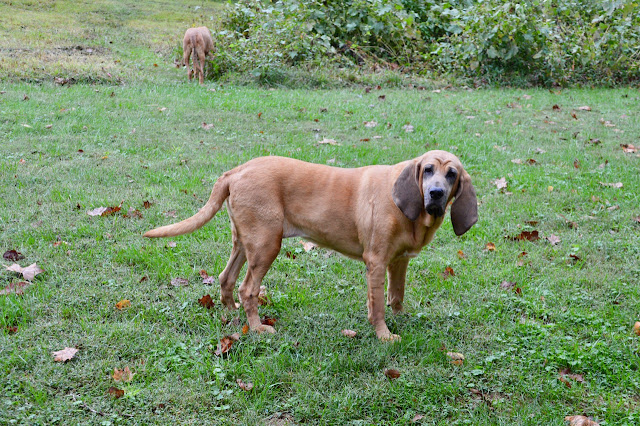 Just like I thought they would, the farmers let the hay dry out for a day on Saturday, let the dew dry out Sunday morning ... then rake and bale the house sometime Sunday afternoon before the expected rain later that night.

With dad running the baler, his son ran the rake ... they still did not want to take that area giant ragweed next to my yard. I tried getting the Echo weed eater started. It has a steel cutting blade and would move right through that ragweed at ground level ... it ran and then shut off. I still need to play with some adjustments before giving up hope and having the local hardware store fix it. 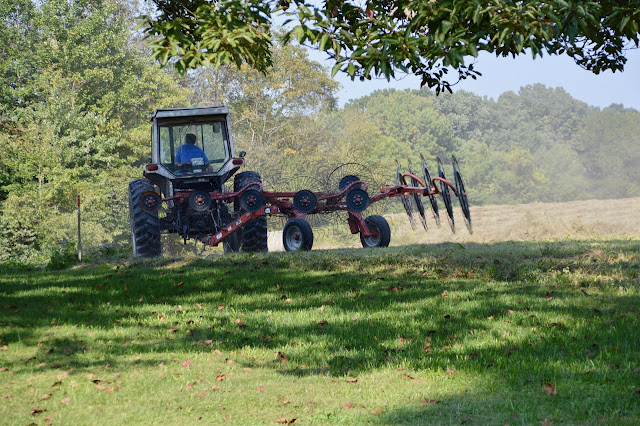 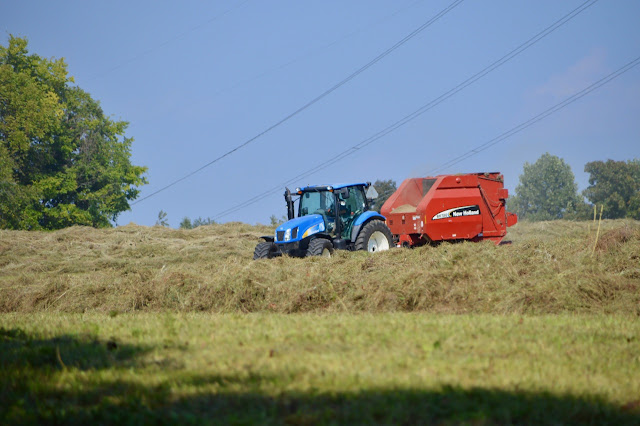 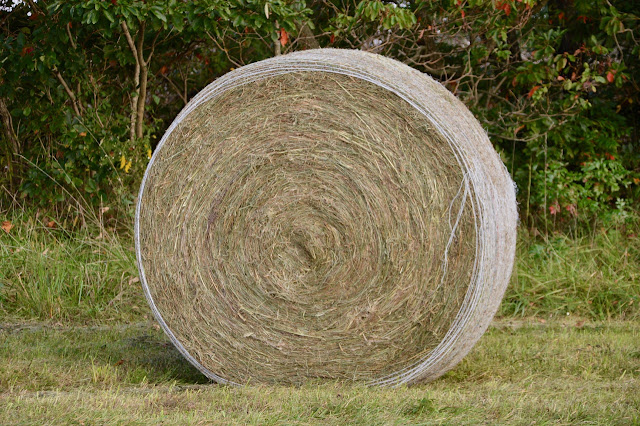 After they left the hounds and I took off for a Sunday walk. A big big surprise ... when I asked Heidi if she wanted to go for a walk ... she jumped down off the couch and headed out to the field along with Sadie and Stella. I couldn't believe she walked right into the field without any coaxing by me. 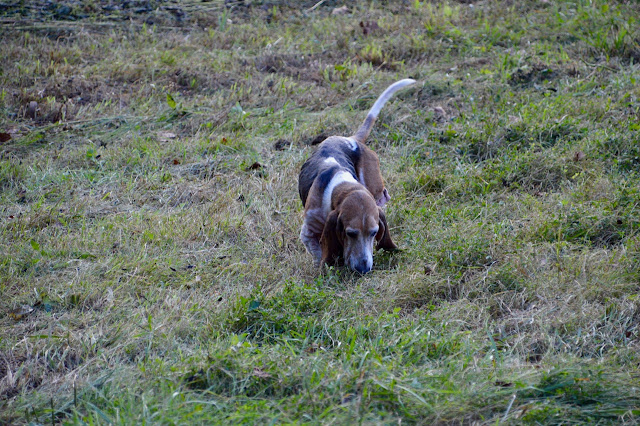 From the start I could tell she was going to go at her own pace. There were a lot of smells for her to catch up on, after 5 months of refusing to walk with us. I can only conclude that she does not like to walk in the field when the grass is tall (like Winston) and the temperatures have be lower than it was in June when they last cut the field. 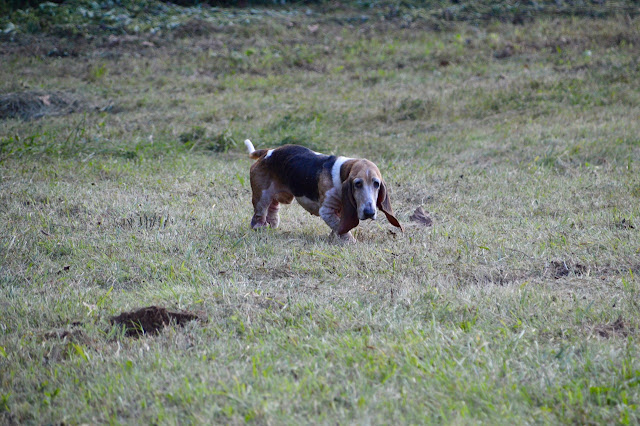 The longer I waited for her to catch up with us, the slower she walked and the faster the bloodhounds go out in front of me. I decided to let her roam at her own pace since she was taking her time of moving to different spots instead of a direct path. 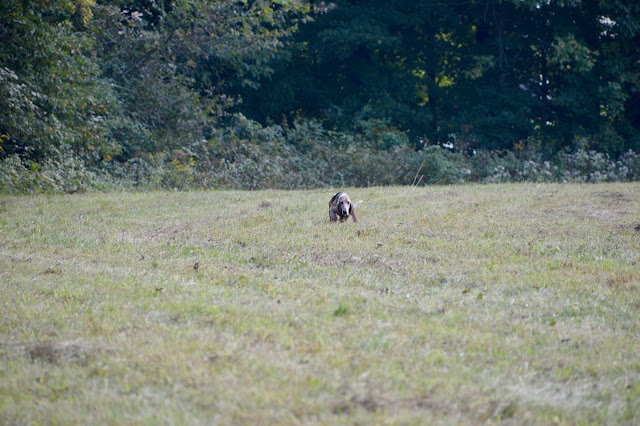 Stella was right behind her as far as doing her own thing. Only Sadie and I were in the walking mode and she stayed out in front of me for most of the way. 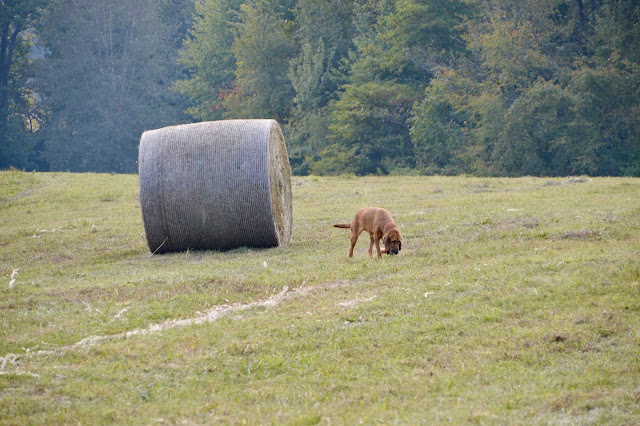 By the time we made that last small turn toward the house, I could see Heidi up ahead waiting or possibly stopping her exploring once she saw us. She started wagging her tail ... something I have yet to catch in a photo ... and then kept up with Sadie and Stella as we walked back to the house. 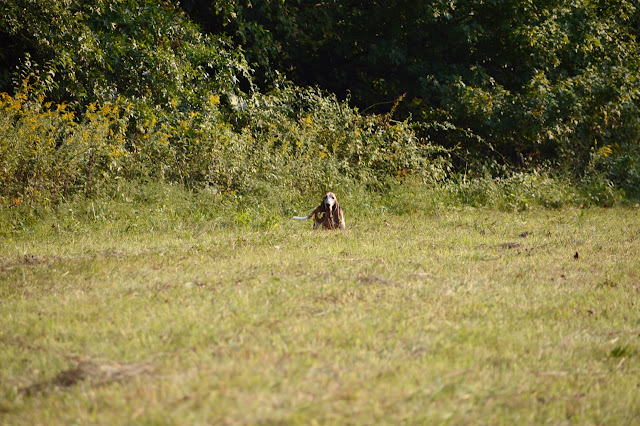 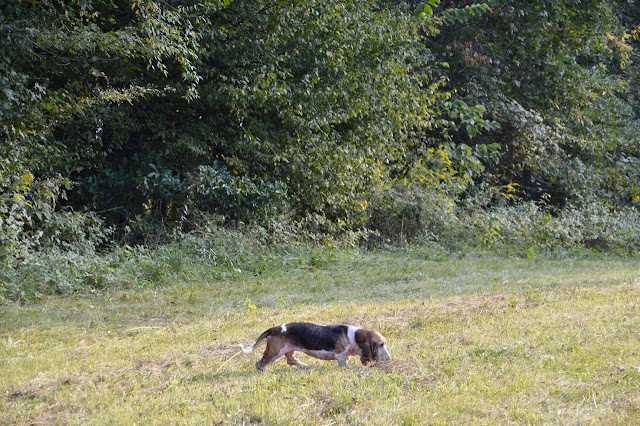 She has not gained any weight this summer, yet has not lost weight so it's been stable for the past 15 months. She eats the same amount of kibble that I feed the bloodhounds, twice per day but that doesn't help either. With her blood work coming back perfect in her last trip to the vet in the spring at least I know that she has nothing wrong internally. 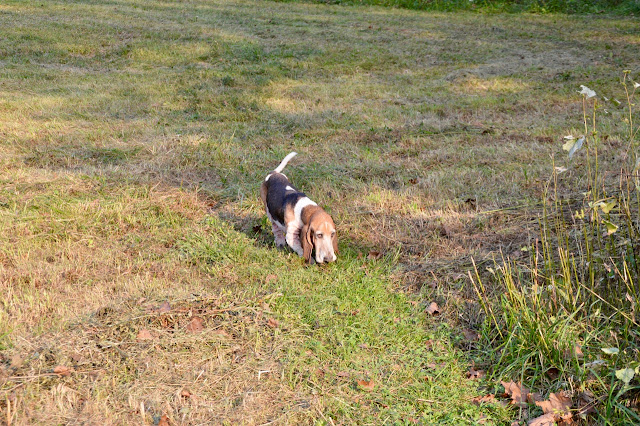 Once the field is mowed, you can see our paths from the grass that has been mashed down. I knew the path was not going to be straight this year because of all the flowers we walked around instead of on. 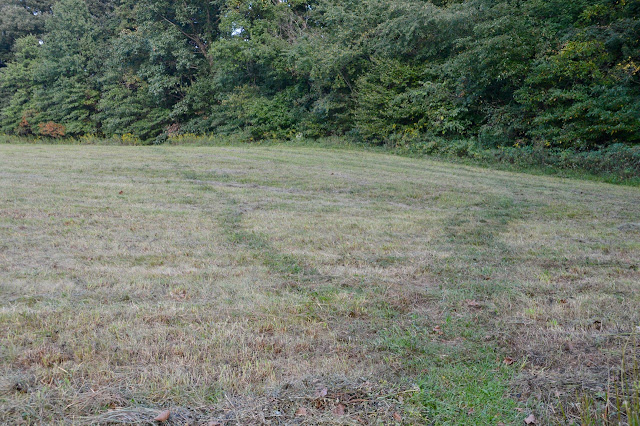 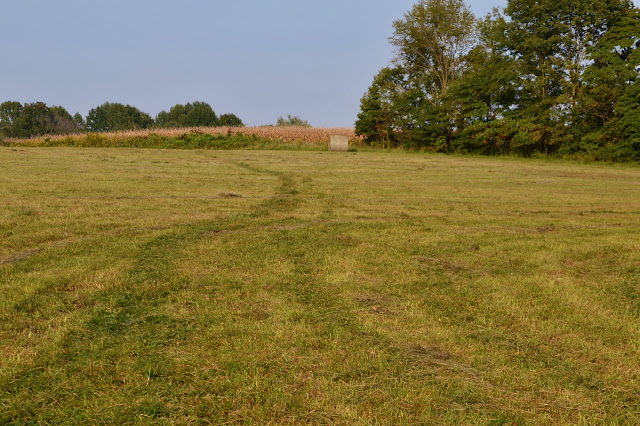 Saturday was another bright sunny day ... it was perfect. 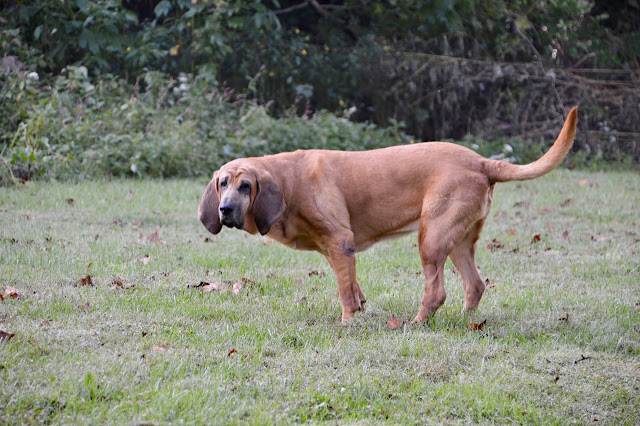 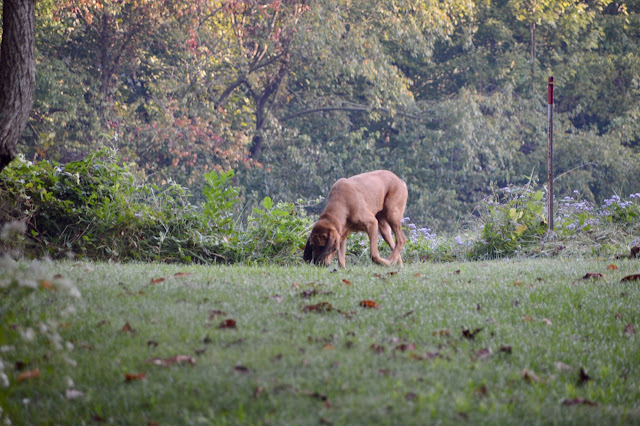 This was early Saturday morning for their first walk of the day. Really wet with heavy dew but nice to have it cut. 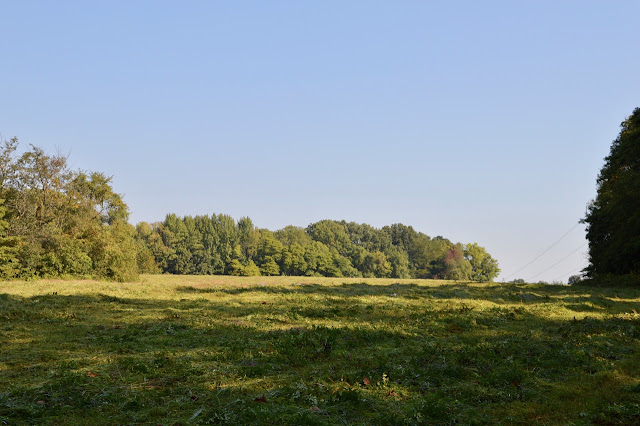 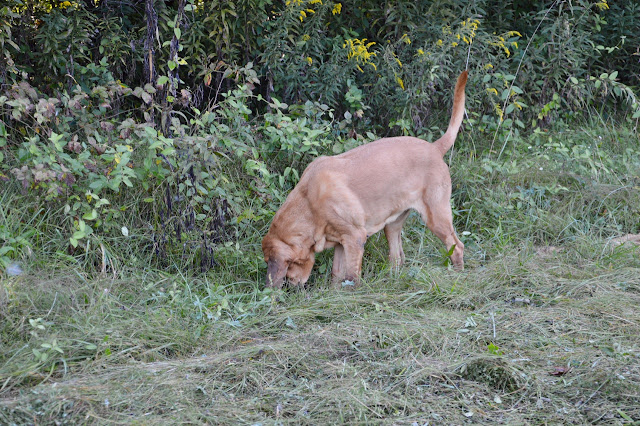 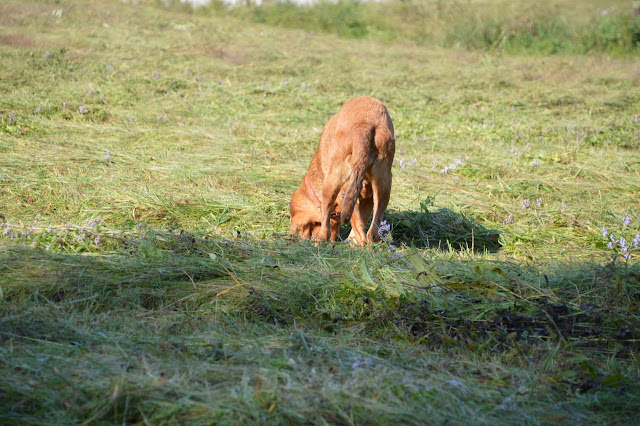 They both had a lot of places they wanted to check out. Luckily I did not see anything hanging from their mouths whenever they would raise their heads out of the small piles of hay. 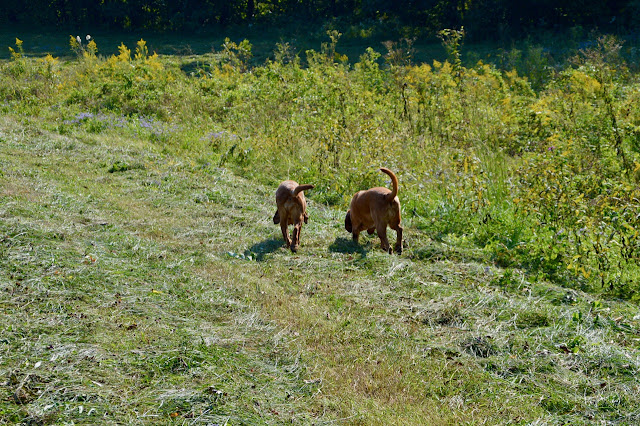 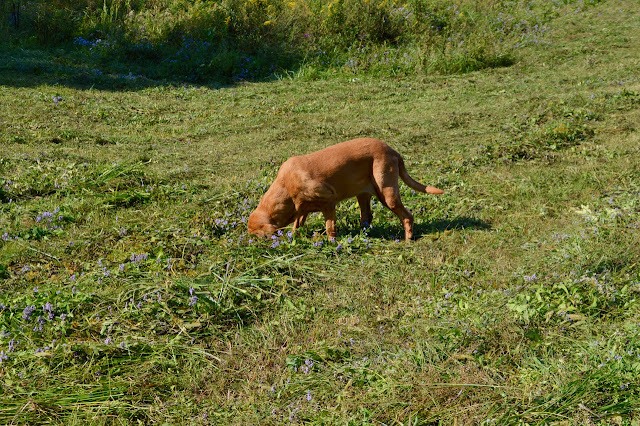 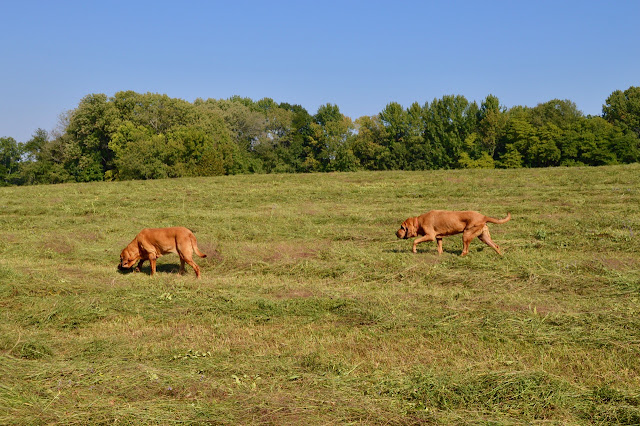 It was pretty slow trekking back to the house because there was just too much to smell on the way. 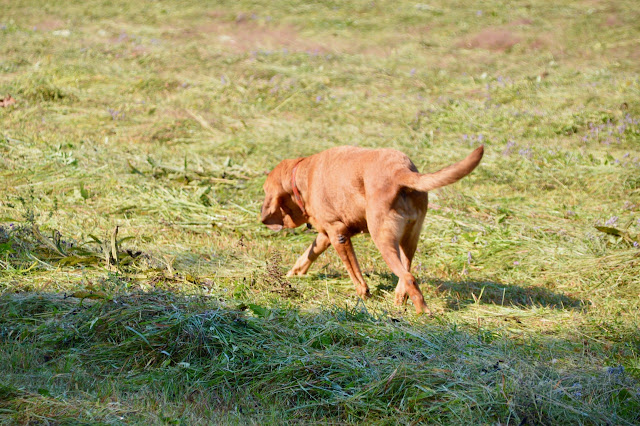 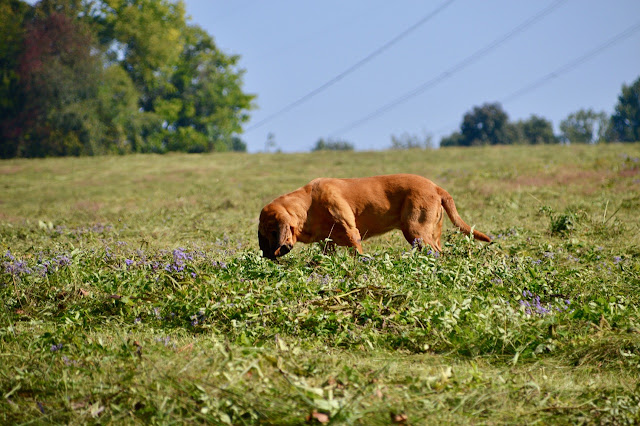 Even after a 2nd walk of the day in early evening, Stella couldn't believe that she had to come back inside the house. Both of them are still being supervised when outside and that will probably continue for months to come. 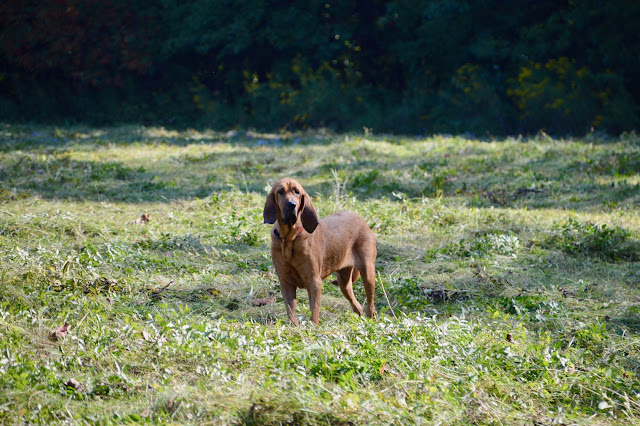 I just bought my 2nd gig of data this morning for the home internet connection. For all of you Apple users that read my blog ... I have not had any major issues with the new OS Sierra. My screen has locked up a couple of times to where I had to reboot the computer but nothing as far as software malfunctions. Yet I don't do as much as a lot of the 'power users' but enough to see it's a good upgrade.

I have moved the blog back to one blog post per page. For older posts you can click the link here at the bottom "older posts" or over on the right sidebar all of the posts are listed in order, with the most recent on top. That's a Blogger design, not mine.

I may post later tonight ... it will depend if the rain will stop long enough for us to get a walk in. It has not been raining for the past few hours so I'd say the chances are good for a 2nd post today at the normal time of 6:30pm or so.

All is good this morning here in 'the tropics' of Southern Indiana.
at September 26, 2016
Email ThisBlogThis!Share to TwitterShare to FacebookShare to Pinterest
Labels: Apple OS, Blogging, Data Usage, Hay Field, Heidi's Walk