A Busy Day For The Hounds 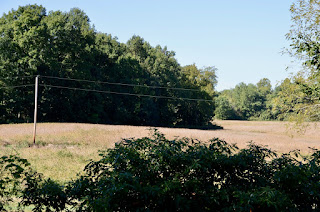 I knew last night that if I did nothing else today, it would be mowing the yard. That would most likely take place in the afternoon because the grass is still wet up until 1pm.

Last week when I was cutting back some of the giant ragweed in the field, the old fashion way, with hand trimmers I had a couple of places I wanted to clear out.

These areas always grow back and I keep cutting them back. Through all of this yard work I was going to let the hounds spend the day outside. I figured with all of that open field they would have plenty of room to occupy their noses. I was wrong.

I ended up using the long handle trimmers the most. I didn't need the garbage can to carry weeds that were cut down to my burn pile in back. Those cheap gloves are still around and still usable after 3 years. 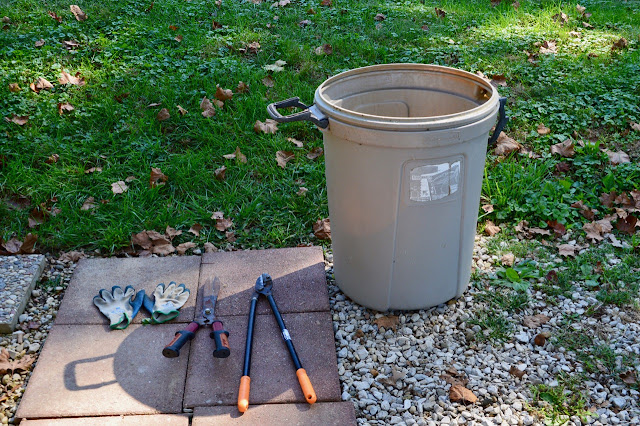 It is kind of an optical illusion but those small saplings, some weeds are growing up through my rock that is on a small bank between the trees. Behind them off the side of the yard is the overgrowth that borders the field next to my property. 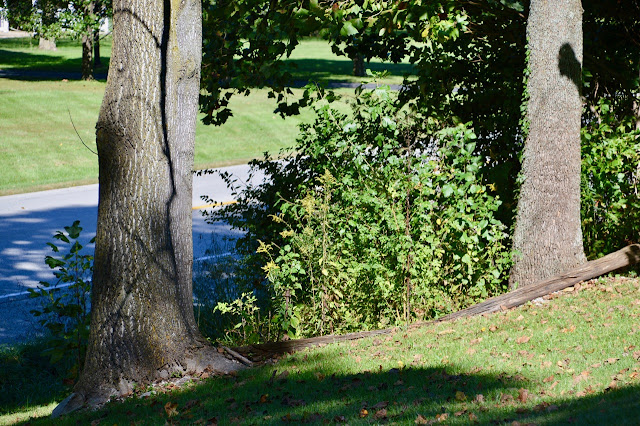 It did not take long for me to cut all of that back. I took the first barrel of limbs up to the burn pile on the backside of the yard. I glanced in the 7 acre field and there wasn't a bloodhound anywhere. They were not in the yard, not in the field ... I KNEW EXACTLY where they were ... the neighbors. Sure enough both of them were right next to the lady wagging their tails, while she was hanging her laundry out to dry in the sun. 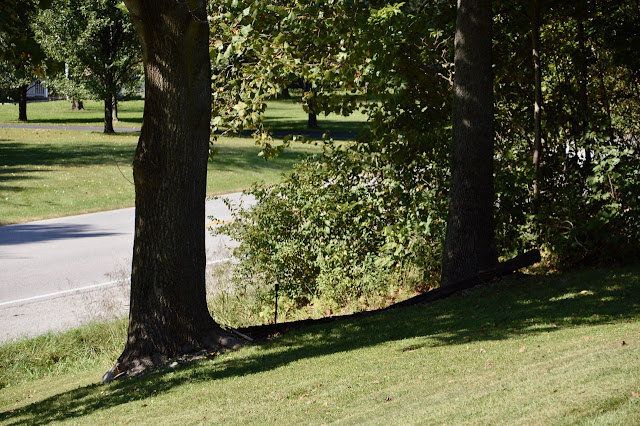 It might sound strange but it seems to be the norm around around ... even though we had never met, I knew their names and they knew mine. I can't remember when they moved in but his father had lived there before them. We always wave if we see each other in the driveway, or in the yards but had never introduced ourselves. Evidently Sadie decided it was about time we did that ...

After a nice short discussion, they asked if I would be interested in the last of their peppers they had grown in their garden. They confirmed it's hard to have a garden here due to the deer and rabbits, which can eat it faster than you can pick it. I also found out there is no solution to winning the war against yard moles. Also, their Dish Network internet was just as high as my Exede Satellite internet service with never enough data for the month.

Before I could finish my yard work for the day and get back over to their garden to pick up some peppers .... he brought me a bag full of them before I had even cleared out around my trees in the backyard. 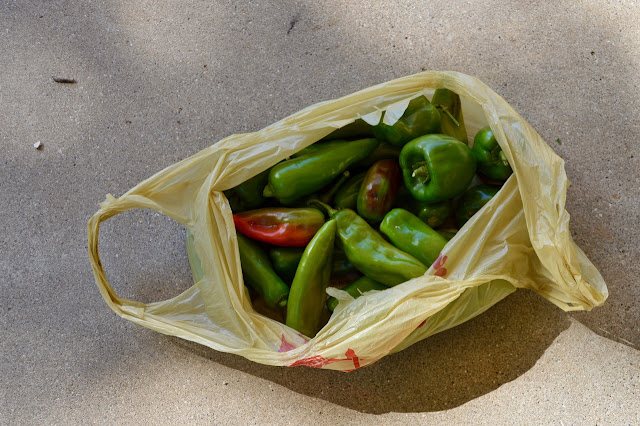 I love those kind of peppers and will be including them in about everything I eat. That is how much I like them and for some reason even the hot peppers never give me indigestion.

This was the 2nd place I wanted to clear out. Its where the old fence post is, the one I talked about last spring. This time I am going to clear out to the bare ground again but this fall I am planting rye mixed with grass seed and cover it with straw. It will then look like the area I cleared in April 2015 which is just to the right of the trees. 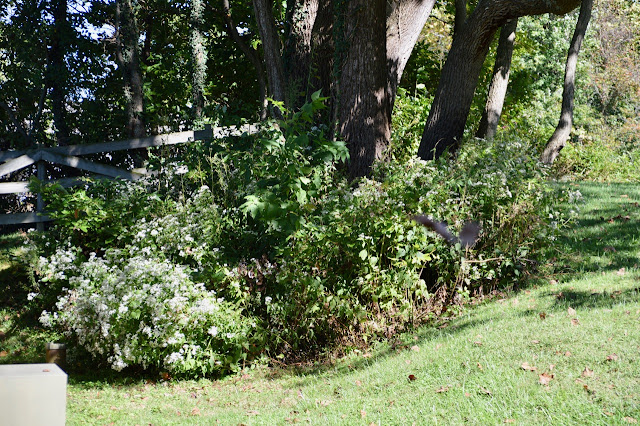 Instead of carrying all of those downed limbs, weeds, wild flowers to the burn pile on the opposite side of the yard, I made two piles right there that will be burned as soon as they dry out. 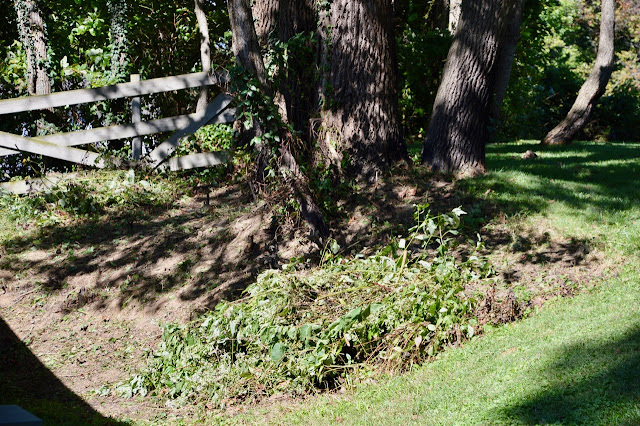 The 3rd area I wanted to clear out is the giant ragweed in the field next to the yard and just to the right of our path. They did not cut it last week. The owner of the field would like to have it cut but it's taller and too thick for him to use his riding mower. I told him yesterday when he stopped by as he toured his field, that I would cut it all out once I got my Echo Weed Eater started. He has the same Weed Eater with the same story ... great the first year ... never started again. 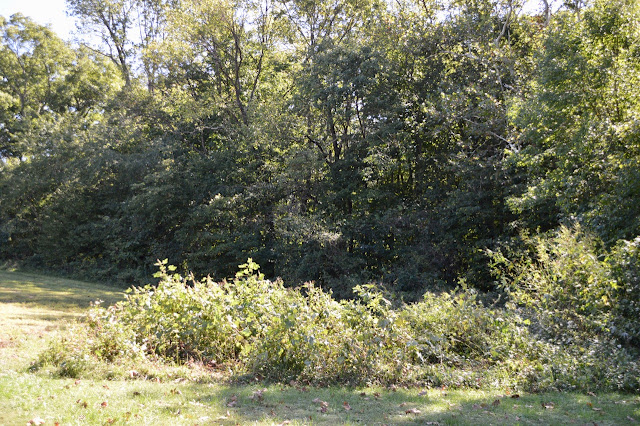 Consequently since I could not get it running ... this 3rd area stayed for another day. What you see cut is what I did last week with the shorter handled trimmers pictured at the start of this blog. At this point in time I still wasn't done with yard work and for some reason Stella and Sadie stayed within my sight while I worked in the backyard.

It is always time for a walk though. To them it doesn't matter what time of day nor the kind of weather. They are always ready to go. 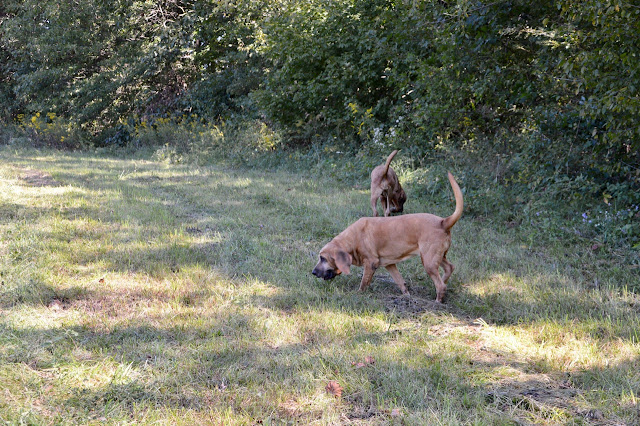 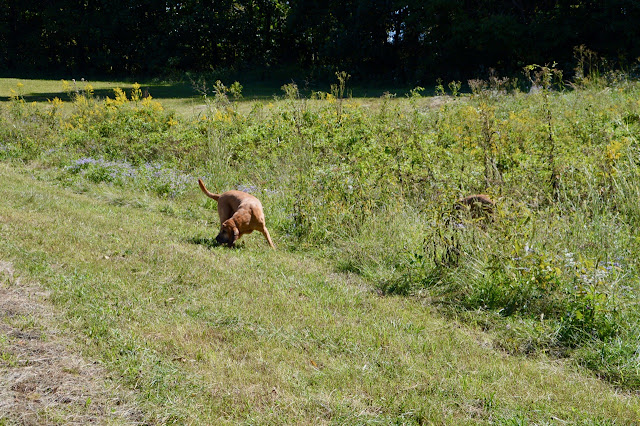 This area is a heavy deer area. The deer go down into that gully that is overgrown and into the woods that border first part of our walk. 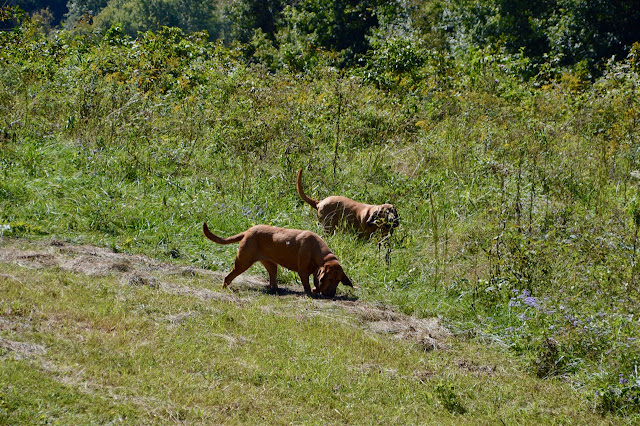 I think they really do prefer the cut field over the field with lots of flowers and butterflies. They are a lot more active when they have room to run and room to put their noses to the ground and run forever. 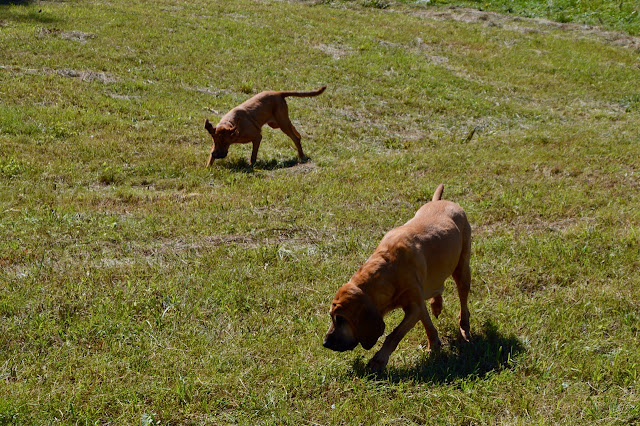 With the yard work, the visit to the neighbors, lunch, watching me mow the yard plus the daily hound walk ... Stella found one of the few spots in the backyard with sunshine and took a nap that lasted for almost an hour ... she never moved. 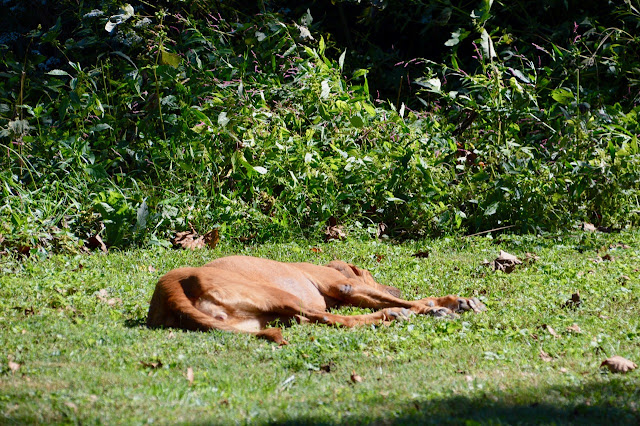 My mower came with a piece to close off the shoot on the side of the mower, to keep the grass inside the mower to be mulched. I've always had the combo blades but I have never used that piece that lets the cut grass be mulched at the same time. It was easy to install and I was shocked at the results. I loved it!!! I didn't have the rows of cut grass that are shot out the side of the mower when it's too tall. I couldn't believe I had not tried that in the 19 years that I have lived here. 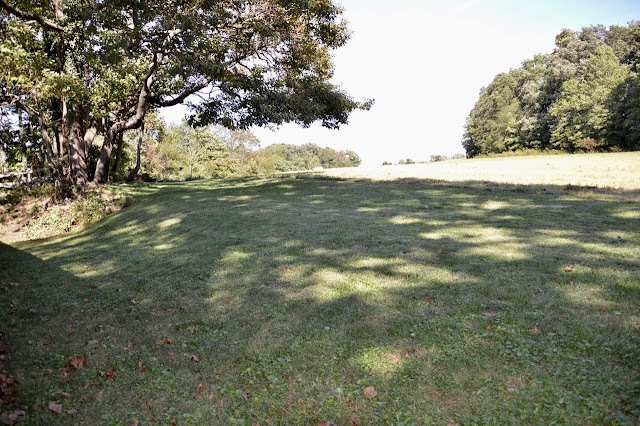 Even with it being pretty windy, the skies were again blue as you can see. Very few clouds and the air from the Southwest was on the cold side. The temps dipped to 49° last night and that is perfect weather for sleeping as long as the window is open. 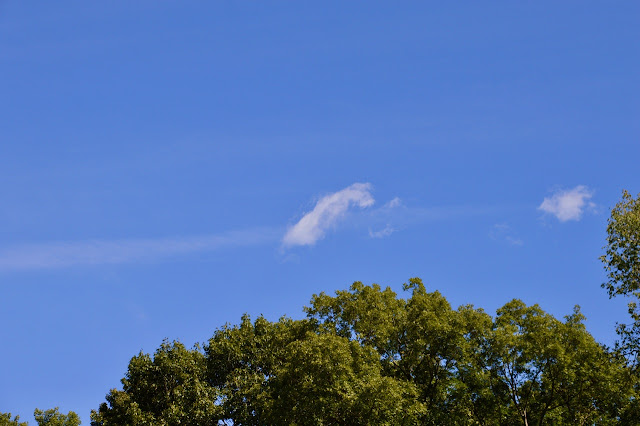 Sadie, being the more active one, spent all afternoon doing only this in a hundred different places. 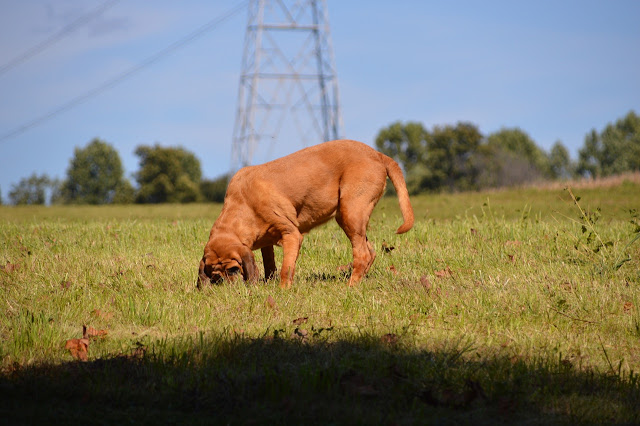 Stella would probably rather do this more than anything else ... except eat. 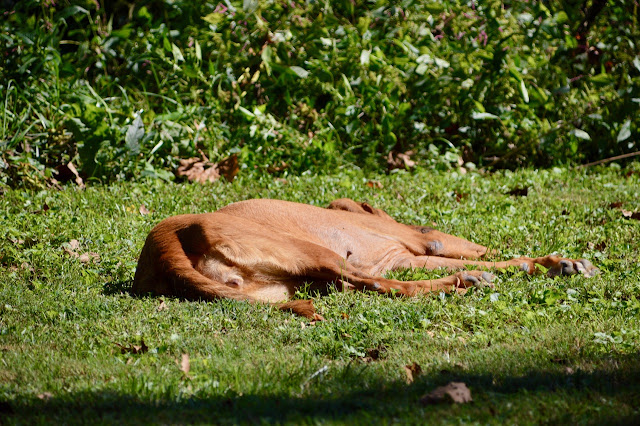 Heidi decided she would come outside after her lunch. She never got out of the yard but did a lot of exploring in the front and backyard while I was mowing. I am going to Google search for some kind of dog food that I can give her to help her gain weight. In the past 15 months she has not lost any weight but had not gained any either. She is literally "skin and bones" ... with a blood work test that graded perfect readings. None of the four vets had any suggestions for the kind of food to feed her to get her weight back to the normal range. 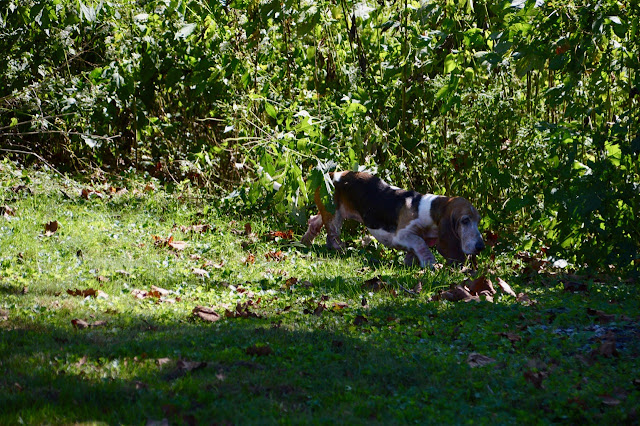 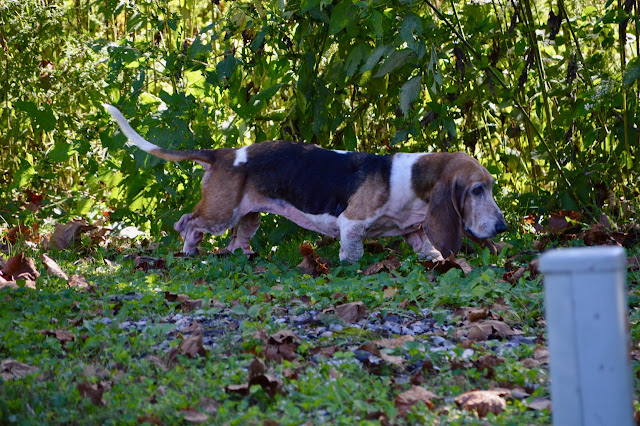 By the time I put the mower and all of the other equipment back into the shed, 'the crew' was ready to finally get to go back inside for their afternoon siestas. They had a full day of being outside. 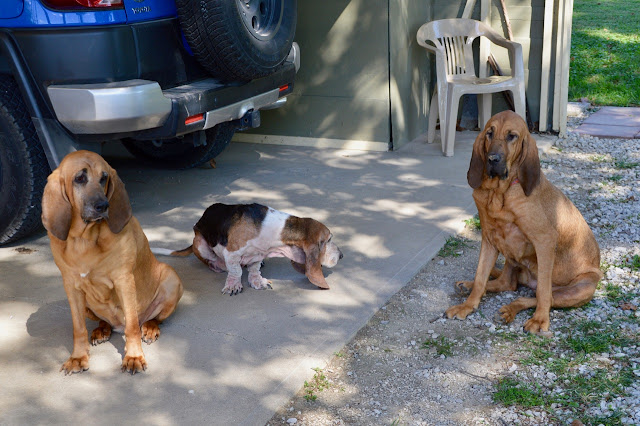 In the meantime I am going to look through this bag of peppers and find a couple that I can use tonight with my dinner of brown rice and steamed vegetables. I am past the 2nd week of my diet changes and am passing with flying colors. The urges for all the good stuff like pizza, Pepsi, ice cream and candy are becoming less frequent as time moves on.

It's nice weather with beautiful days but my allergies are going insane here in 'the tropics' of Southern Indiana.
at September 27, 2016
Email ThisBlogThis!Share to TwitterShare to FacebookShare to Pinterest
Labels: Heidi In Yard, Neighbors, Peppers, Sadie, Stella's Naps, Yard Maintenance