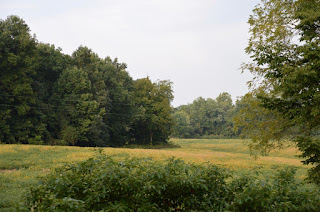 Most of our days here are "spur of the moment" plans. Without a list of things to do to the house or outside this summer, it became a very very lazy summer.

This morning I decided to implement a new 2016 Plan of Attack against the falling leaves. I know it's not even close to October, where the 4 hound crew last year supervised in getting rid of the leaves. This year I am going to get rid of them a little at a time, maybe when I feel like working with them and today was the 'test run' for that new plan.

I also wanted to start my overpriced Echo SRM-225U weed eater with the steel blade and knock down some giant ragweed today. I bought it a couple of years ago when I needed something that could cut through brush and 1"-2" diameter trees, in the area that I cleared last April 2015 and then planted grass seed.

It did well that first year and I had all of that brush cut down not only there but along the bank that runs beside my driveway. It also cut through the small saplings with no problems. It sat a full year, I didn't try to use it last summer. Before this winter I emptied it's gas tank and stored it for the winter. Earlier in the spring of this year ... it wouldn't start. So it went back in the shed for the summer. 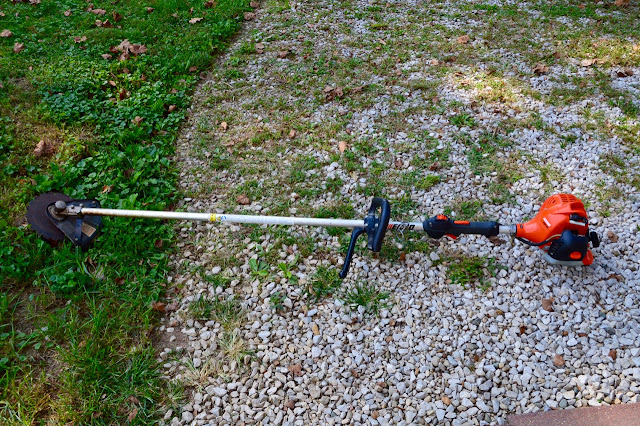 Today I brought it back out and followed all the steps of troubleshooting the problem of not starting, along with a brand new mixture of gas/oil and a clean air filter that is dry after being saturated with fuel at some time ... it wouldn't start. I finally got it started. It coughed and sputtered but would not idle. Once it was going strong enough that I thought it was running but when I pressed the throttle, it died.

So it sat there long enough for the photo and it went back in the shed. I paid a lot of money for that piece of crap and many other's have the same complaint as I do on the internet. I have a feeling it's a fuel filter problem. I bought it at the local hardware store, they carry all the Echo equipment. They will fix it at little to no cost if I decide I don't want to try fixing it.

But I didn't need it to blow leaves. I knew I had a small leaf blower somewhere. I hadn't seen it for years, in fact it was so long ago I couldn't remember if I still had it. In one of my high energy cleaning the shed days, I put this old dirty leaf blower on one of the racks near the top of the shed out of the way ... and out of sight. 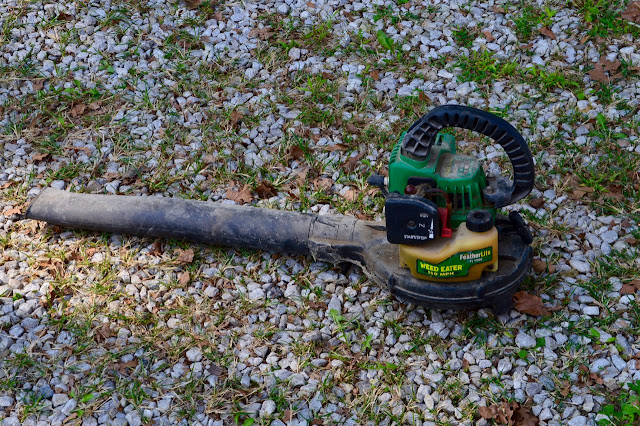 I poured in some new fuel, and it started by the 4th pull of the rope. After all of these years of not being used, it coughed, sputtered, blew blue smoke out the exhaust but it kept on running ... then finally hit it's prime and we were blowing leaves off the driveway and off of the bank ... in the direction of my area to burn. It's wasn't overpriced like the Echo SRM-225U. 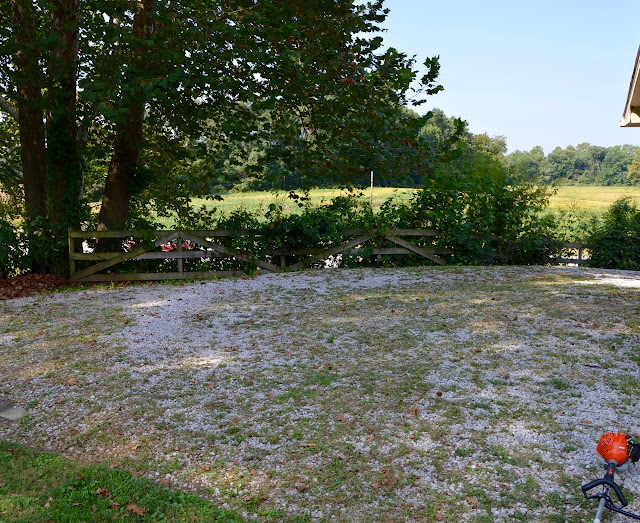 The driveway was pretty well covered with leaves to start the fall season and in less than 15 minutes that little old leaf blower had moved all of the leaves right next to the area I am going to burn them. After some testing in the yard, I think it's going to be a major new tool this year instead of raking leaves. It will also eliminate me working with my larger leaf blower/vacuum that needs electricity to run and working around a 100' electrical cord.

For some reason, not until this morning, did I realize the corn field across the highway has almost finished it's process and will be picked fairly soon. I remember that field being planted earlier than most others around here, right before 3 straight days of rain, so only logical it has died out first. 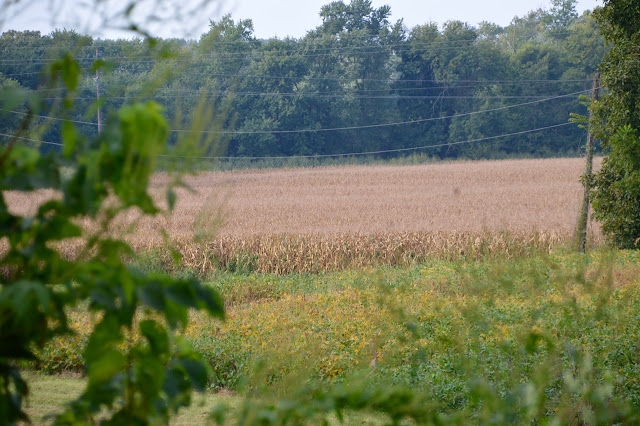 Not sure if you can tell but if you look closely there are a few red leaves inside, showing signs of leaves starting to change their color. 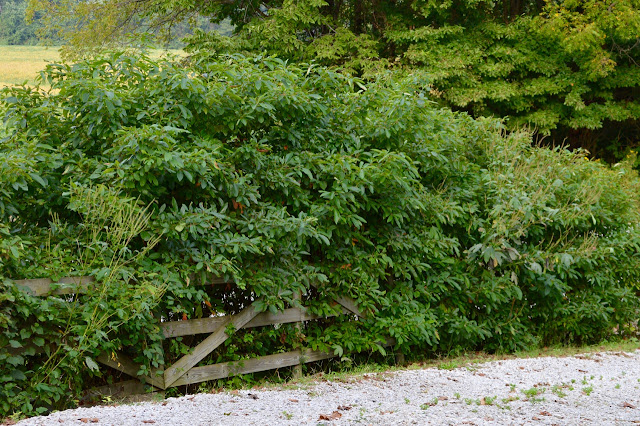 While I was trying to get the Echo weed eater started and then blowing leaves off the driveway ... Sadie and Stella spent time roaming the field in back. I was happy to see they were within their boundary out there while I was busy doing something else. 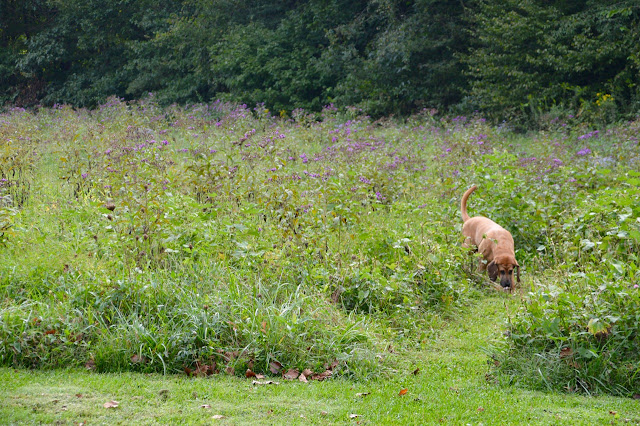 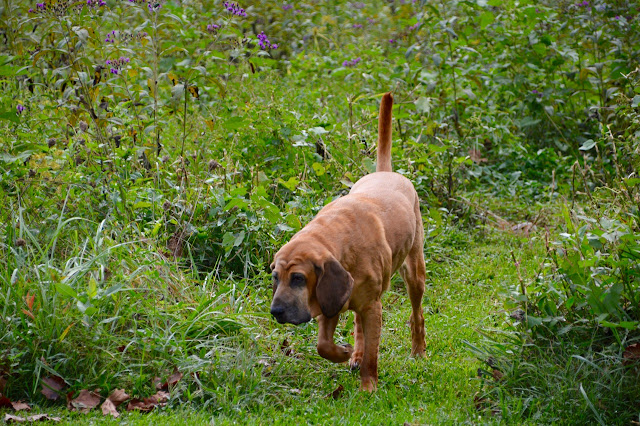 Sadie was the one that got her running in today. Stella on the other hand thought it was a little too warm to exert much energy. She moved slow today and it didn't matter where she was ... she was in slow motion mode. 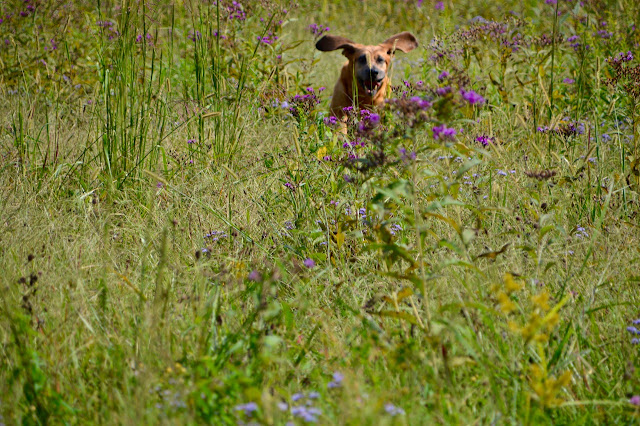 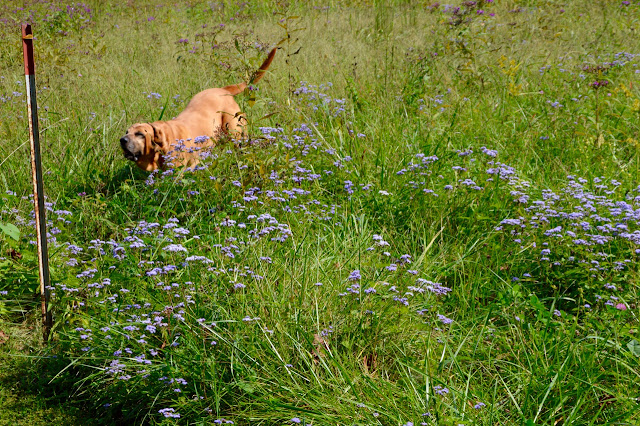 Sometime around noon we headed out for our walk. It was getting warmer today, mid 80's, and I knew later this afternoon was going to be too hot to do much walking. Summer isn't over yet I guess. 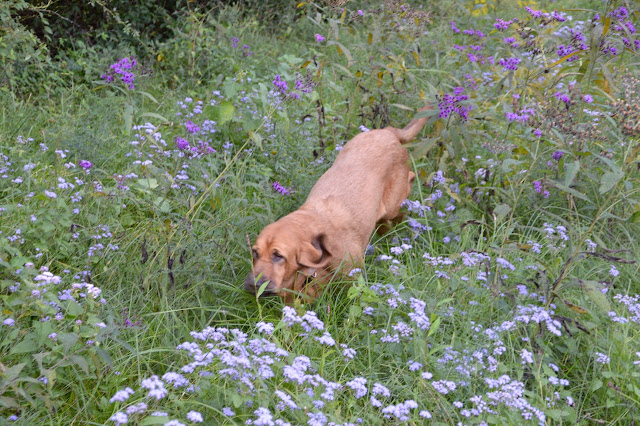 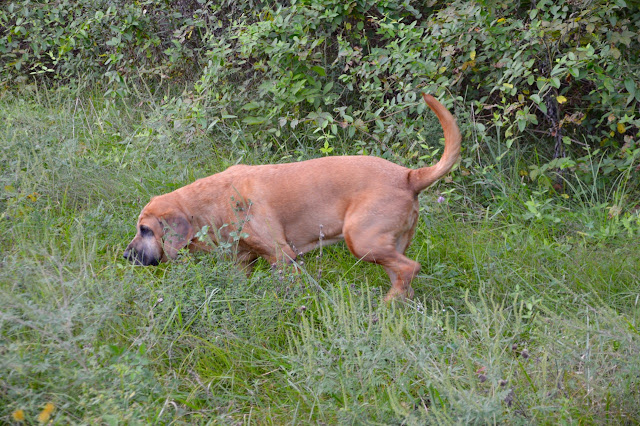 The hounds took off and once again they trotted way ahead of me. I guess they had places to go while I tried to focus in on some of the many butterflies. 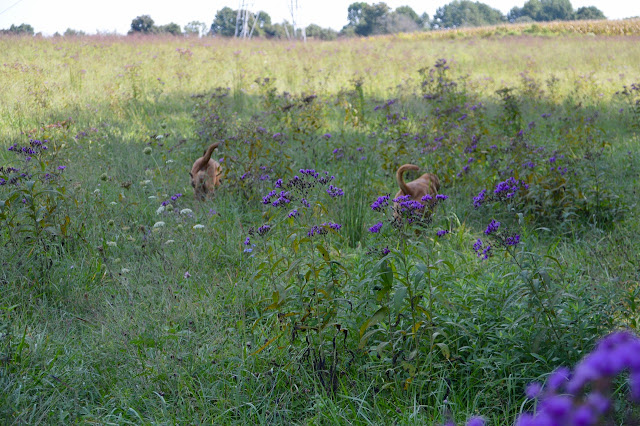 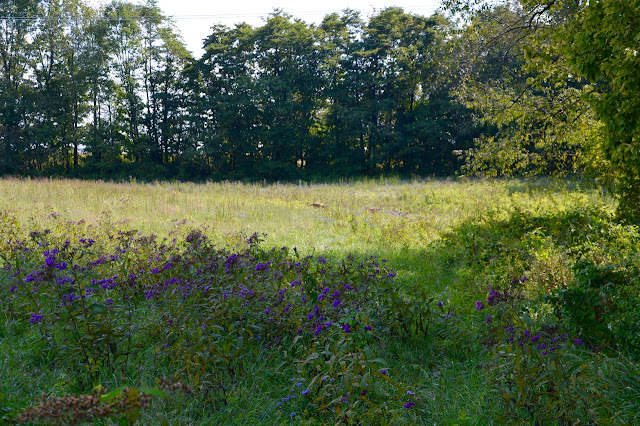 By the time I was in range to zoom in on them, they were in the far right hand corner. They didn't have any problem leaving and following me as I walked by them. They had a lot of places they wanted to check out today. 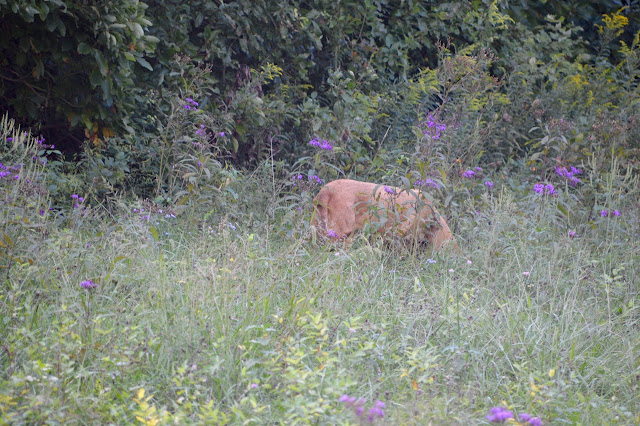 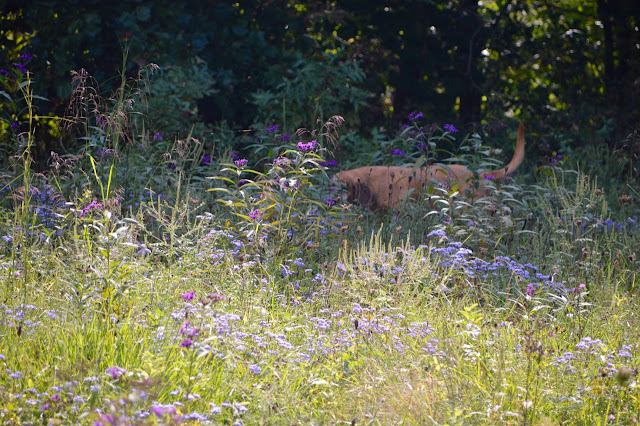 This was a fairly small butterfly but I was able to photograph it. They move fast and I really think the sound of a beep when my camera is in focus scares them off ... today I turned that sound off. 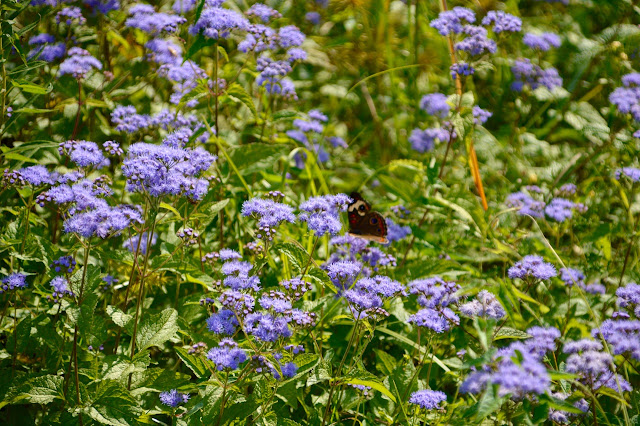 Not sure what it was but I really liked the design and color of this butterfly. 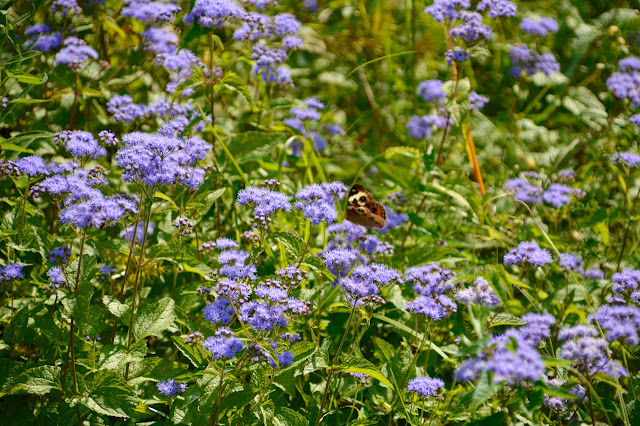 By the time we were 3/4 of the way done with the walk I could tell that Stella had had all the fun she needed for today. I think she prefers the hay to be cut lower so its easier to gain speed when running. 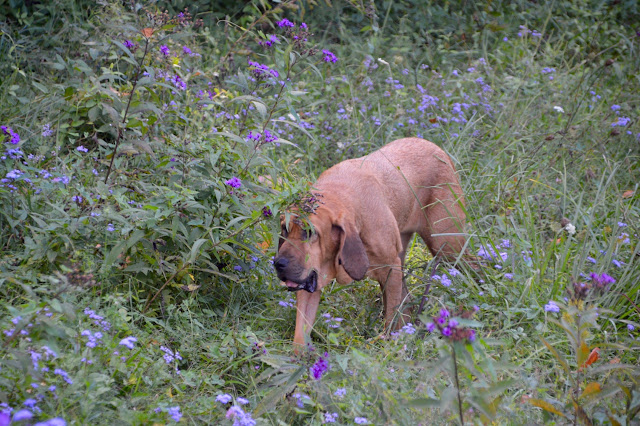 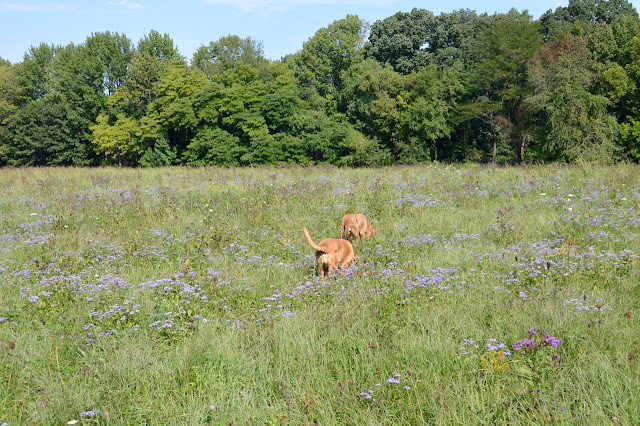 I wanted to see if I could photograph one of the younger butterflies. They are really small, may be hard to see ... but it's dead center in this picture. 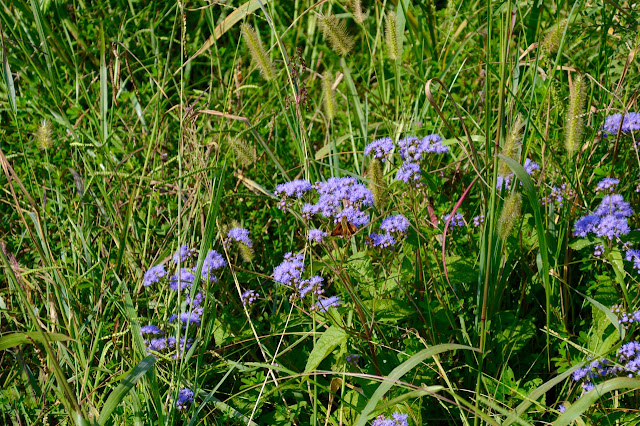 The hounds cruised back home at pretty slow speed ... they were both asleep soon after getting back inside. The house inside had increased to 80°, so I shut the blinds on the west side for the afternoon and turn the ACs back on. Heidi approved and rolled on her back to sleep on the couch. 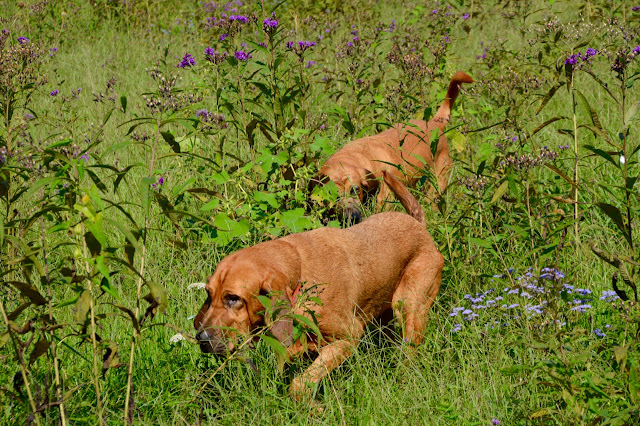 Later in the afternoon we sat outside enjoying the weather. I took some hand trimmers and cut down a lot of the giant ragweed in the field and near my burn pile. Those hand trimmers may be a better option than that overpriced Echo SRM-225U weed eater ... that won't start.

I had thought about a 2nd walk for the hounds but it felt hot, the iPhone weather app was telling me it 'felt like' 90° and with Stella's tongue falling out of her mouth, that was a sure sign a 2nd walk would not be attempted today. We decided we had to take a walk after I posted this, so I have added some new photos below. 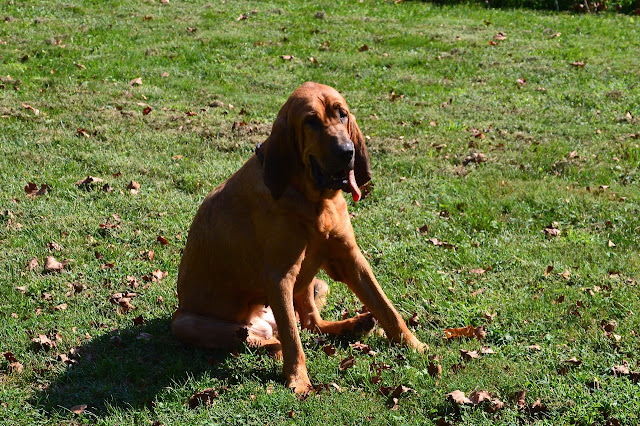 Here is the link to the pictures of butterflies I took on the walk today.

My new iPad Mini2 arrived today. Free shipping and day delivery. I had forgotten how small it was but did remember it fit in my hand perfect to read an ebook, a pdf file or a website. It didn't take long for me to download the few apps I use, and change some settings. 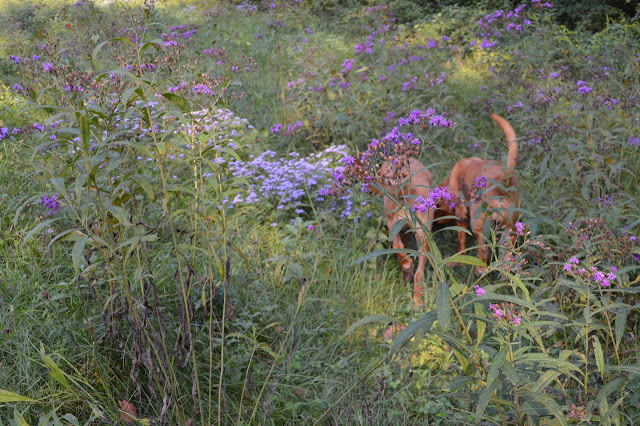 Just like the iPhone with the retina display, all the photos on this blog looked really sharp, and clear. I can't believe the difference compared to the older Apple 27" LED Cinema model monitor. 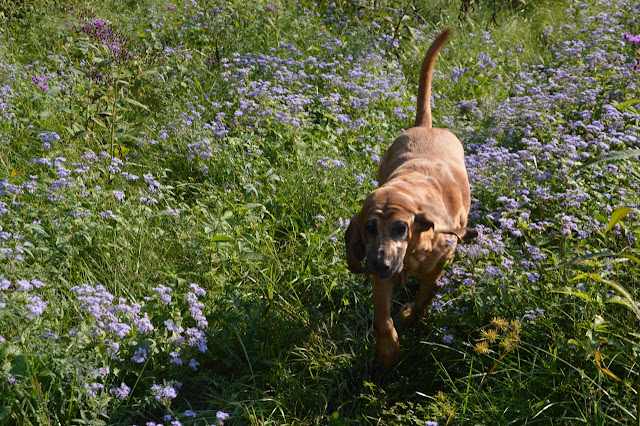 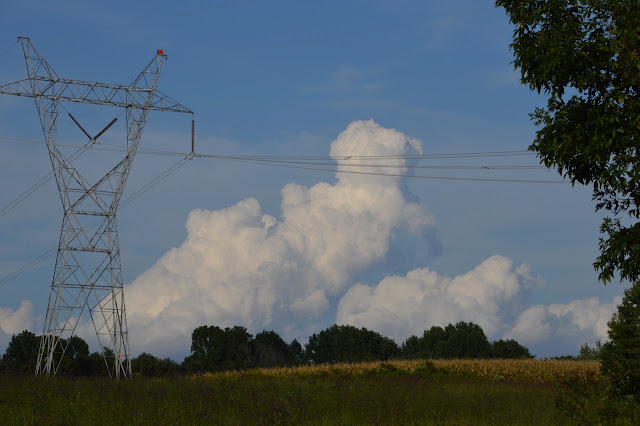 I thought about restoring my backup from November 2015 from my last iPad Mini but instead set this one up as a new account. Google Photos worked just like advertised. I had all my photos on the iPad Mini by using Google Photos, online. So it will take no memory on my hard drive. 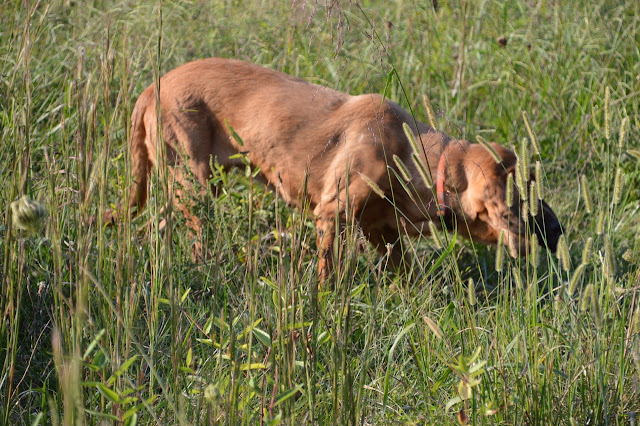 Speaking of photos ... last night while I was in Apple's Finder (like Windows My Computer) I was changing some file names when I saw I wrote something wrong here last week when discussing the size of my photo library. 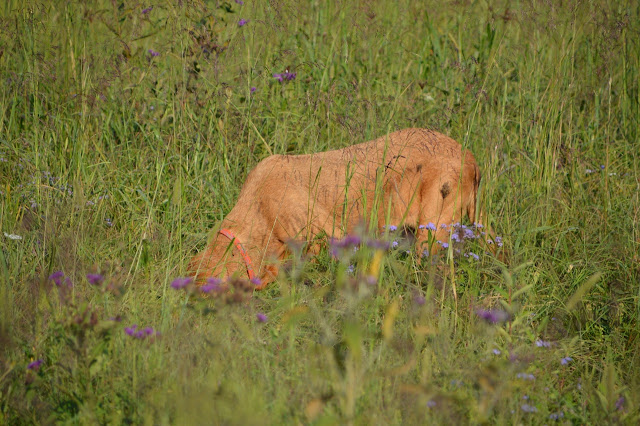 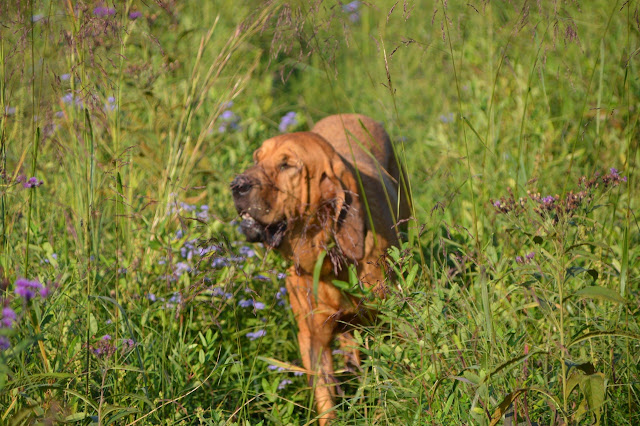 I said it was 22.4Gb but last night I see that was just my old iPhone library. The newer Photo Library that Apple used to replace iPhone is 167Gb of photos. There are a lot of duplicates though .. maybe not a lot ... but more then I want to go through and delete. It's the way the program Photos handles different devices. 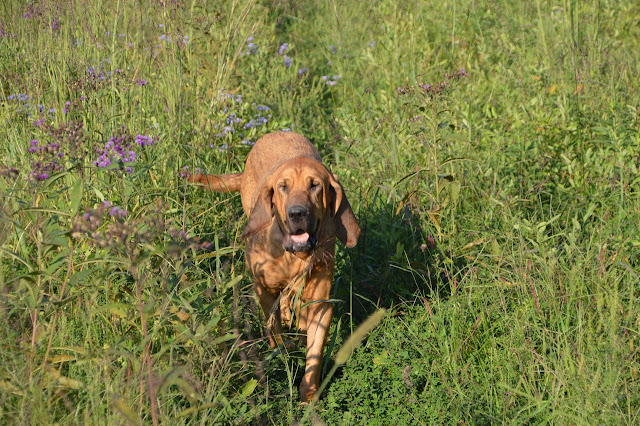 So I am pretty well set. Some diet changes, football season is here, my old leaf blower works, the weather is great, Heidi likes the venison and lamb blend of dog food (her skin looks better), I'm back in the world of electronics with a new iPhone and iPad Mini ... all are used daily.

Now, if I had someway to have groceries delivered so I wouldn't have to shop ... I'd have it made.

Life is good here in 'the tropics' of Southern Indiana.
at September 15, 2016