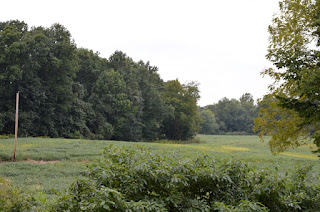 All my photos have been copied to Google Photos as of 4am this morning. That time also includes the time it took to move photos from the main library to individual albums ... that I call folders on my hard drive.

That meant I got to bed early and gained an extra hour of sleep. The plan for today was getting the yard mowed sometime after I woke up and before the rain was predicted to arrive around 1pm. By the time I was up moving around and realizing I was alive for another day ... the storms arrival had been moved out a couple of hours to 3pm. Coffee is the greatest invention ever!!!

The skies told a different story. 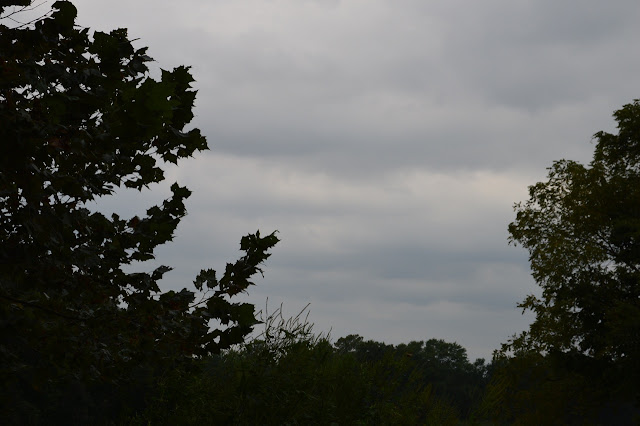 Luckily I was able to gas up the Craftsman 6hp engine, set at a 3" level and get all of the yard mowed, with a push mower ... just before the sun came back out with no rain in sight. 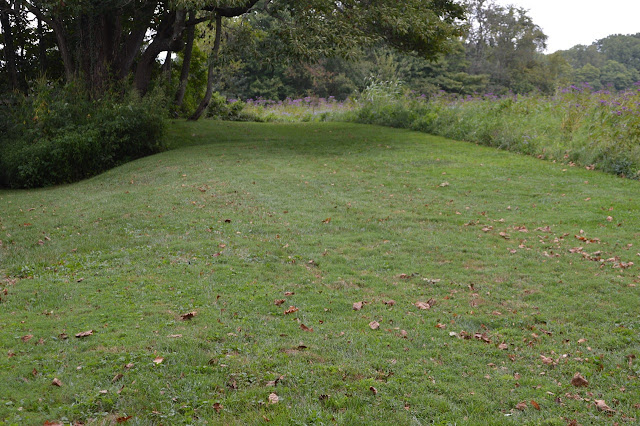 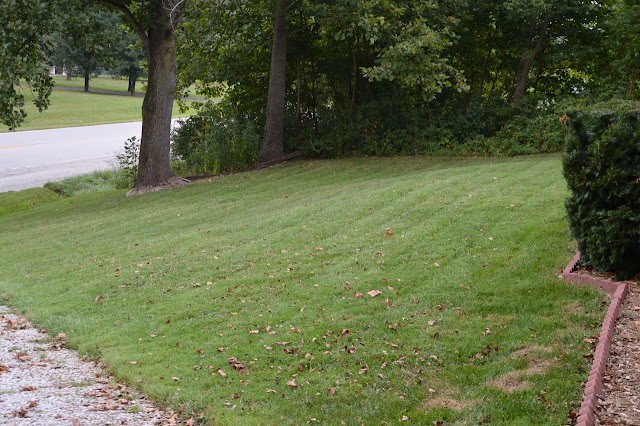 With it feeling like 90° while mowing I had to have some recovery time before taking the hounds out for a walk. That included a lot of ice cold water, laying down with a small fan directly over me ... while keeping Stella and her drool away from me and letting her know that I was okay and did not need medical attention. She seemed concerned something was wrong with me. 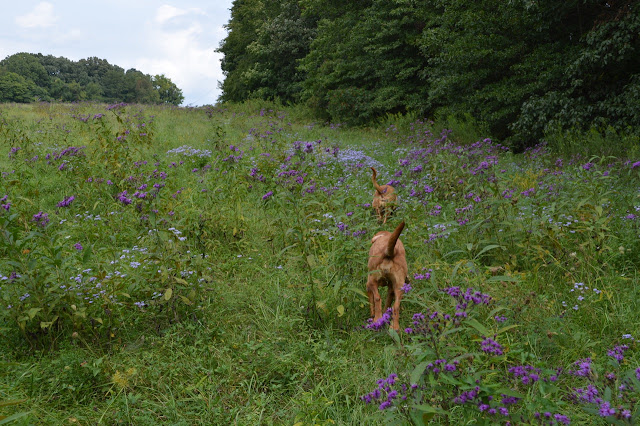 So with a little sunshine peeking through the clouds .. Sadie, Stella and I took off. The both were on a mission today with their noses to the ground, following out path most of the time and stay out in front of me. Heidi??? Above 70° has her enjoying the AC as she lounges on the couch or on the bed. 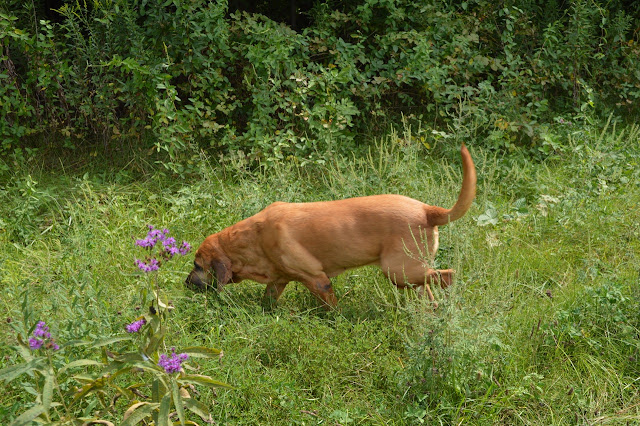 The temp may have been in the mid 80's but it fell like triple digits. The yard work had zapped some of my energy and the hound walk was feeling more like a chore than enjoyment. Basically I couldn't wait to get it over with and get into the shower. 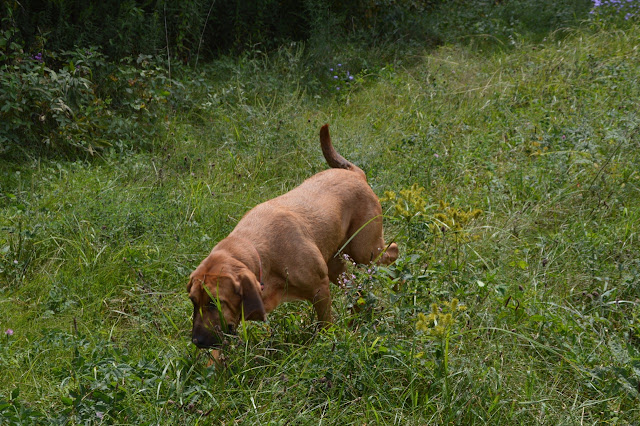 I can say that I am really happy with the new lens and it's only been a couple of days but it has out performed the two Nikon lenses that came with the camera in the short time I've had it. All of these photo are untouched, no editing.

I can thank ZippyPinHead for his recommendation a few months back on the Tamron camera lens. 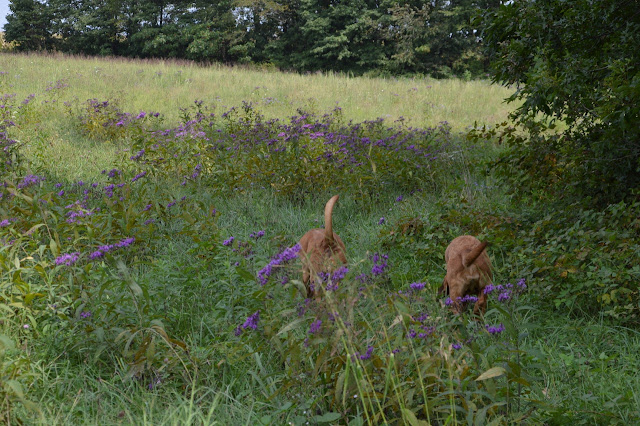 I was a little surprised that neither hound took off for the far right corner of the field like they always do. Yet they are only following the strongest scent. There must have been a lot of deer traffic on our path last night ... they didn't wander too far off today. 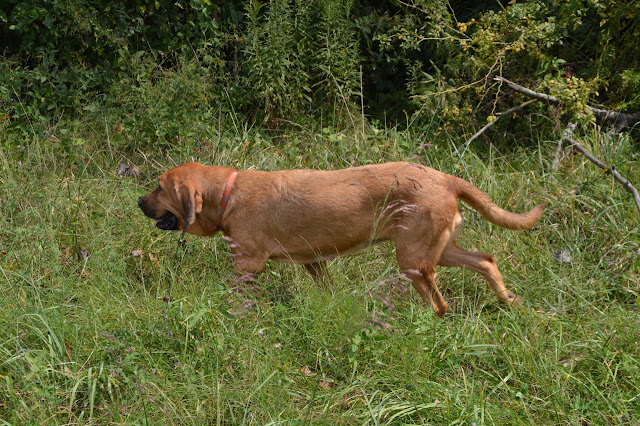 Stella is already thinking about that cold AC running back at the house. She agreed with me, the walk can't end soon enough. 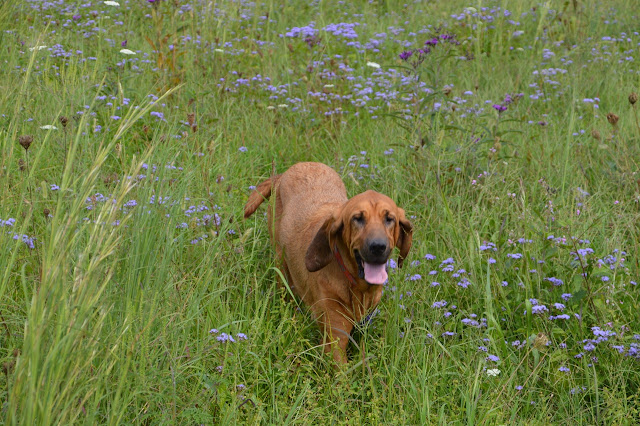 On the way back to the house I assumed incorrectly that both hounds were right on my heels following me home. I turn to check different times and of course today with the heat making the walk miserable ... I have only ONE hound behind me. I'll let you guess who has snuck off. 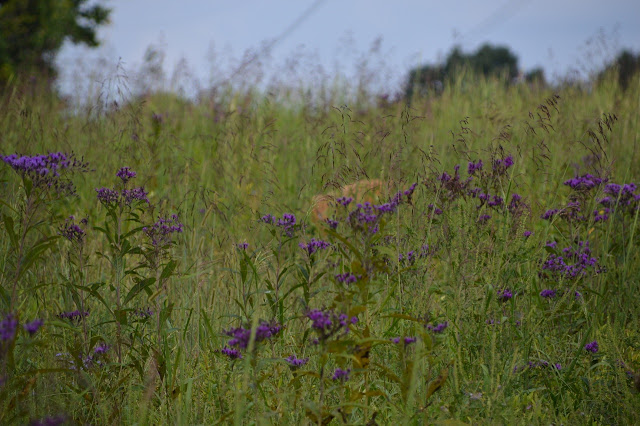 I looked everywhere and didn't see any tan or light brown color among the greens and purples. Had Stella gone to the "no fly zone" to check things out? I wasn't going to backtrack after her, she always shows up eventually.

I scanned the field with the lens set at 200mm and look what I found in the photo above. Sadie and I turned and headed for the house ... we wanted AC and we wanted water.

Stella caught up to us by the time we stepped into the yard almost at the house. She had ran pretty hard to do that.

Overall it was a nice walk though and I'm glad we got one in today.

Blogger is still having problems with blogs on the blogroll or lists .. for all those that use Blogger. Al thought it was just Wordpress it didn't like but he and I have a lot of blogger blogs at the very bottom of the list like I mentioned before. They are updating with new posts but not moving up on the lists.

Some of you may have noticed I have taken the word 'RV' out of my blog title. A few years back an irritated reader made a comment or sent me an email, I can't remember which, telling me I needed to because my blog was nothing about RVs, no travel, blah blah blah ....

At that time I decided to leave it the blog title for a couple of reasons. It was part of my paid domain name at the time. I had about 2 years worth of posts where I spilled my guts on different thoughts I had about RVs, which kinds, what I had found ... just a lot of research ... and for some, too much info and anxiety.

I almost changed the title back in January after Winston (I miss him daily) passed. I could tell the blog had gradually changed direction to where RVs were rarely if ever mentioned anymore. Hounds were mentioned all the time .. it has turned into 'their blog'.

I know one reader is very very happy with the new name and in fact I have liked that blog title name for quite sometime.

I tried a Google Photos feature last night. I "shared" a folder with an old friend that I went to college with. He had sent me some photos years ago that I kept on my computer ... so with one url link to that album, he was able to see it without having to log into or sign up for Google Photos.

Now with all my photos loaded manually except for a few from the iPhone ... I will start automating as much as I can. I will clear off my SD card in my camera to prevent Google Photos downloading another 3,000 photos that I have already put into the Google Photo system. Then after that card is clean, each time I slide the card into my computer, Google Photos will download the new ones automatically based on me changing my settings for the camera/card.

Sure I could do this all on iCloud and keep my Apple devices synchronized ... but iCloud doesn't have a lot of free storage and I never pay for storage.

The NFL finally starts the regular season tonight. It's a good thin because those meaningless pre-season games that only puts money into the NFL owners pockets were injuring important players at a rapid rate ... some are out for the year. At the injury rate was going, used car salesmen are turning into NFL defensive backs.

No I did not watch anything political on my tv last night nor will I in the future. The media spin for the past year has made me dizzy enough to make me puke anytime I hear anything, anyone or see anything political.