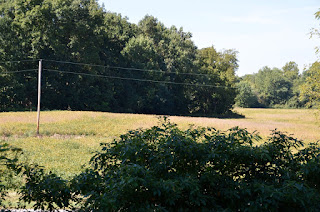 I was up until 4am last night but it was all for good reasons. Sadie was sleeping in her "big chair" in the living room, Heidi was on the right side of the couch while Stella had her back up against the side of the kitchen island on the carpet side of the room.

As you remember I get free data after midnight so that is when I do any downloads and especially downloads that are large, like a new Operating System for Macs. It was over 4GB's and was noted it would take about 1 hour.

I knew from previous OS changes it was going to be at least 3 hours and probably 4 hours by the time it was installed and running. Toward the end you have to be around to log in, using a password, hit a few 'continue' buttons ... so going to bed while it downloaded and installed was not an option. I had other things to do during those 4 hours though. Nightly after midnight I will uploaded all the photos I take that day very easily from my computer hard drive to Google Photos AND Flickr. I can organize them into their specific alums on both programs ... everything done within 20 minutes.

So what about the other 3 hours ???  How about a new book from Chinle over at The Spotted Dog Ranch. This was #7 in the Bud Shumway series and although I have just started I can see it's another great mystery. I was hesitant in buying it in the middle of the night (2:30am)  because in the past I will read them nonstop not caring what the time of day or night it was. But ... I bit the bullet, bought it on Amazon and had it in my Kindle reader and on all my devices after a short synch.

By the time I hit the bed at 4am, the new Mac OS system was working great with some fantastic new features and Chinle's book was hard to turn off. I'll finish it sometime today or tonight. The hounds still had their breakfast kibble served at 8am ... although they will not whine for it. They sleep as long as I do.

By 1pm we were ready for the mid-day walk ... another beautiful day here in 'the tropics'. 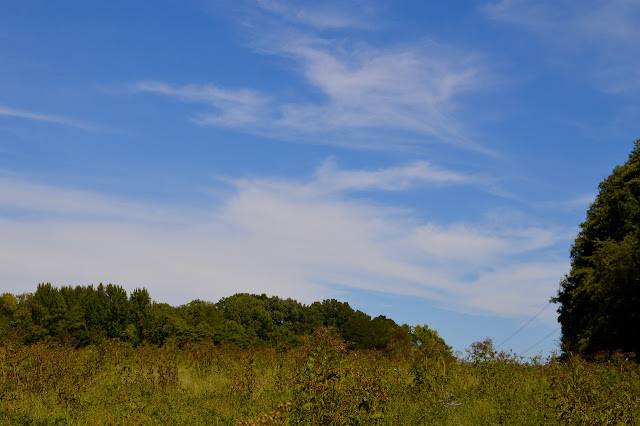 Sadie and Stella might start the walk out together, but it will not be long before they follow their own noses and head different directions. Today I decided I'd be a friend and let them roam on their own. 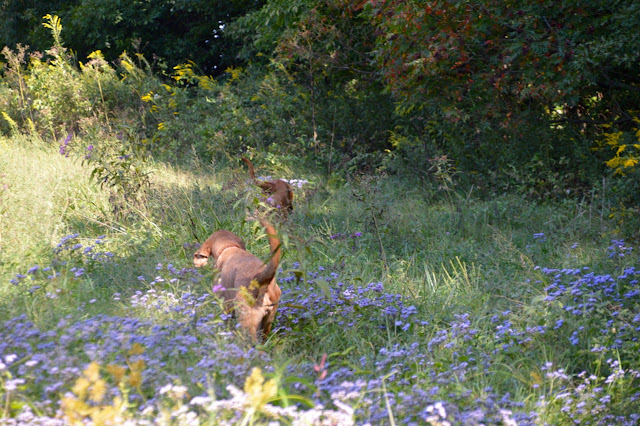 It didn't take long for each hound to take advantage. By the time I got to the first turn, NEITHER hound was close to me. 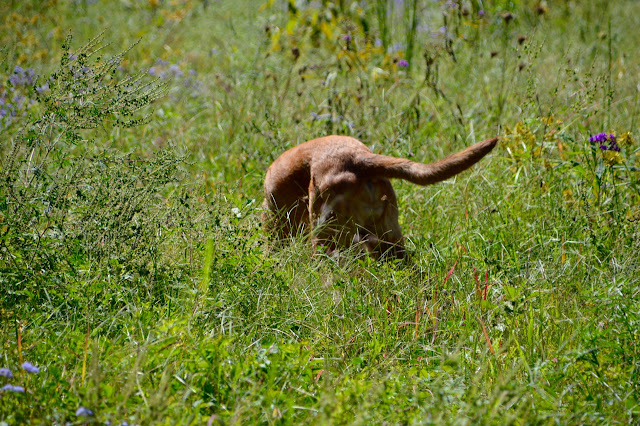 Sadie never likes to be left behind, so she sprinted to catch up to me. 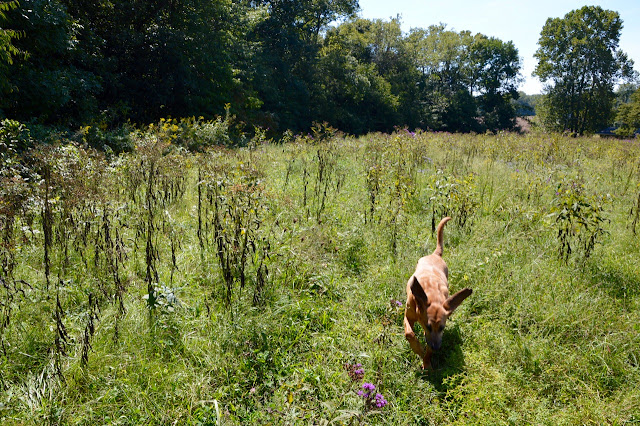 When I asked her "where's Stella" ... she looked around in all directions, but Stella was nowhere to be seen. 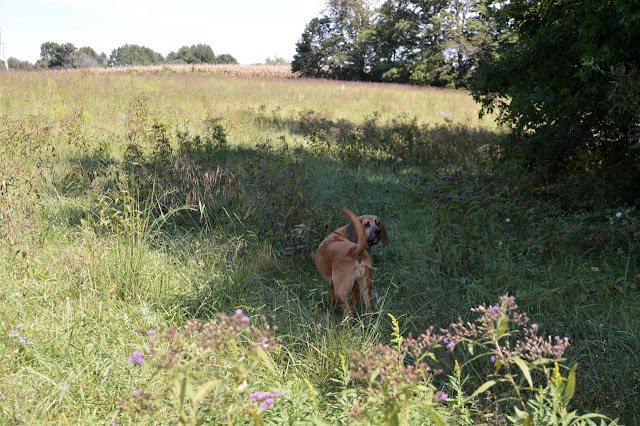 The field continues to change each day as we move close to October already ... hard to believe how fast September is moving. 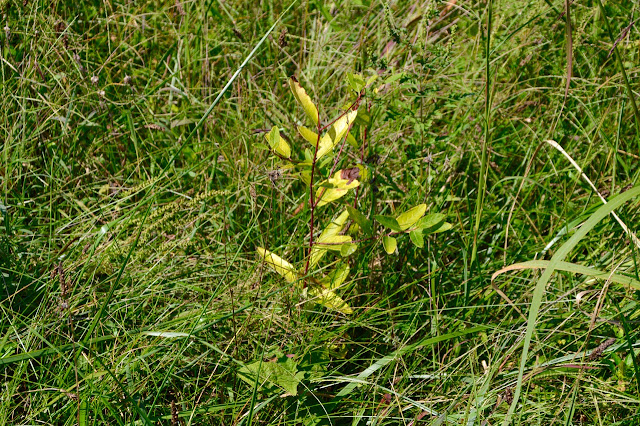 Sadie and I were walking along the back edge of the field heading north, not quit at the 'halfway' point ... looking back into the field ... no sign of Stella. 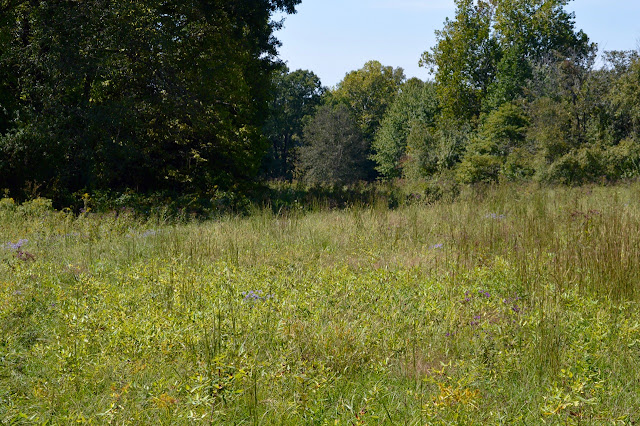 Every corn field I look at in a 40 mile radius shows the corn may be picked a little earlier this year. I'll be taking some photos of the fields at least across the highway ... some farmers have bought some new equipment. 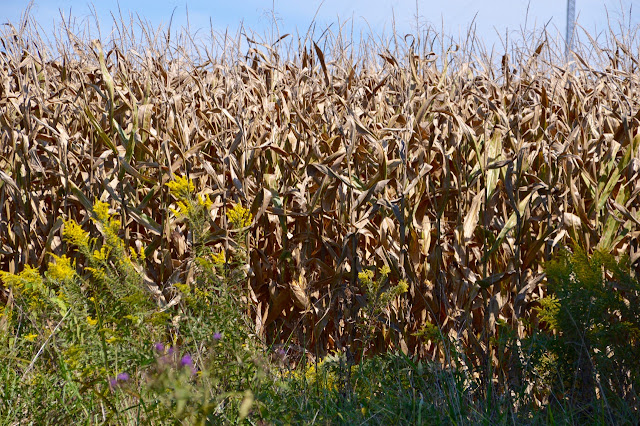 As Sadie and I turn the last time to head home I didn't see Stella anywhere. I started calling her name and guess what ???  Off to the left was Stella slowly strolling through the high grass and flowers. I expected to see her walking up the path towards us but was happy to see that she was just to the left of us. 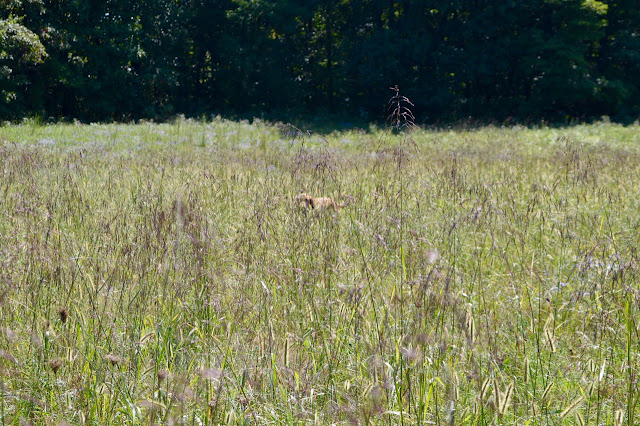 As usual, she took her time. 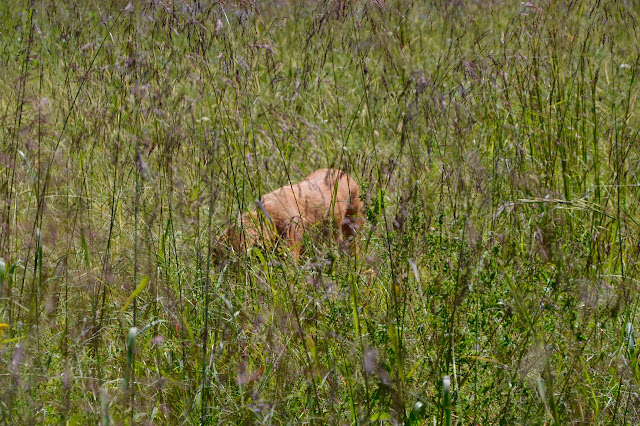 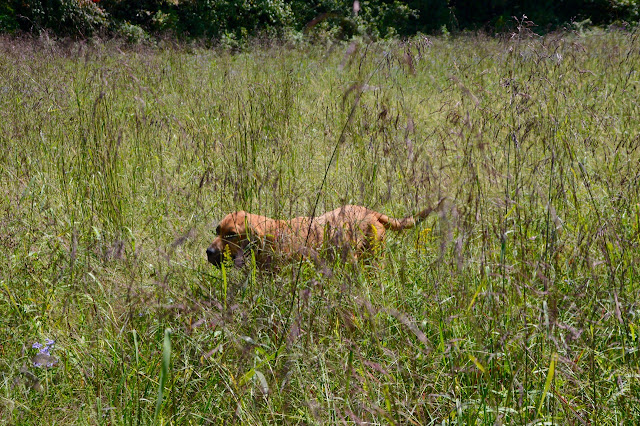 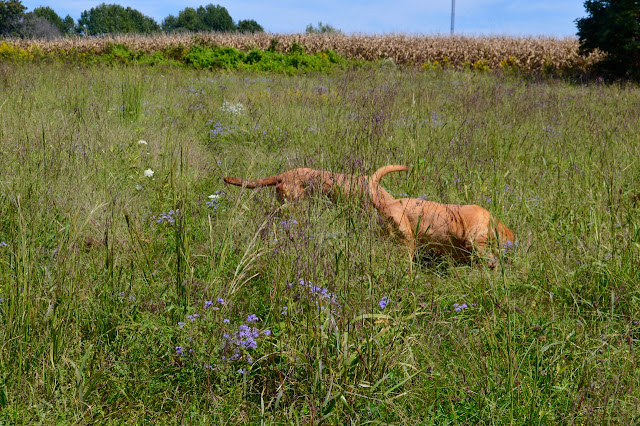 They both eventually move forward and when it gets hotter, they will take the lead and head to the house. 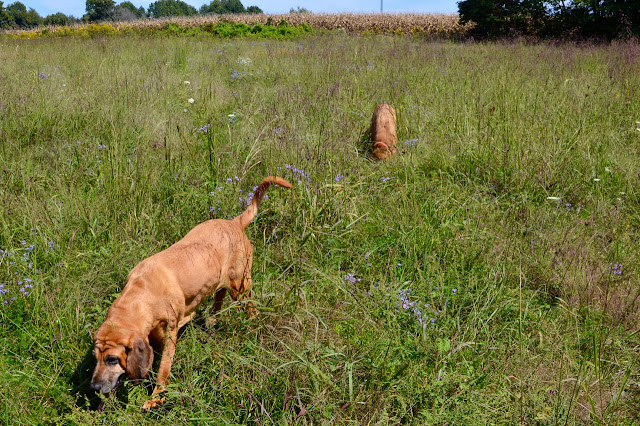 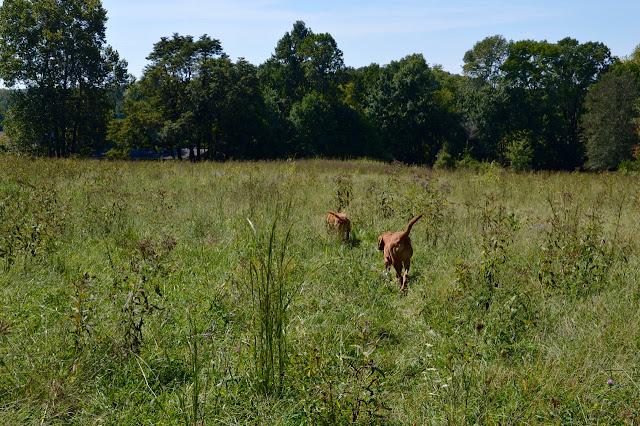 These were in the middle of the path but we always walk around and not on flowers ... hounds included. 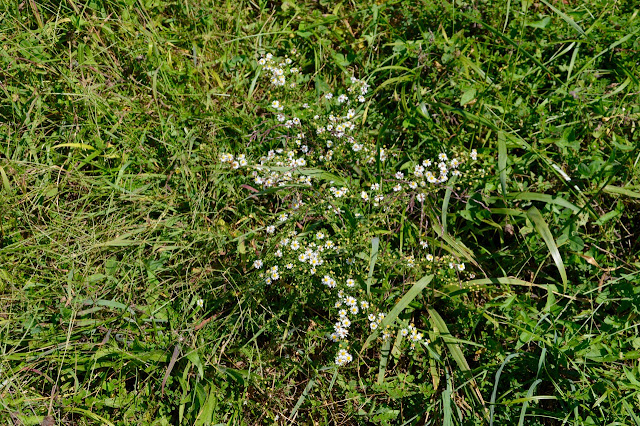 Although they are on the way home, there isn't a scent they will not pass if that radar nose of theirs picks up a new target. 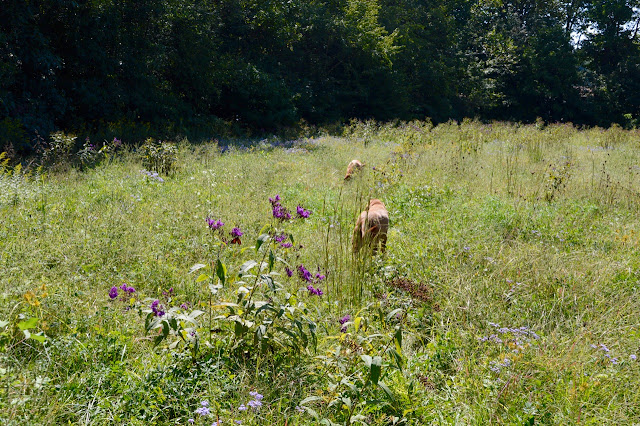 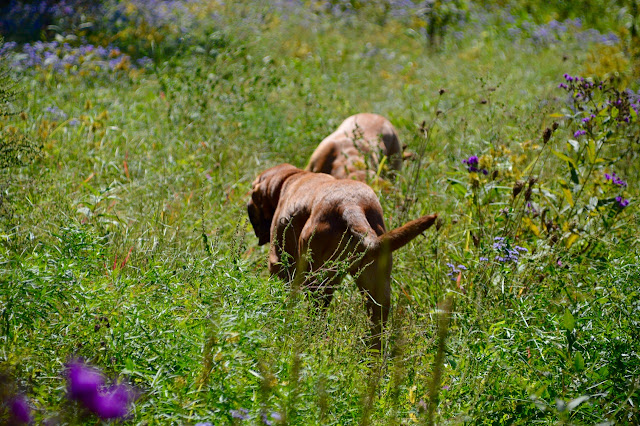 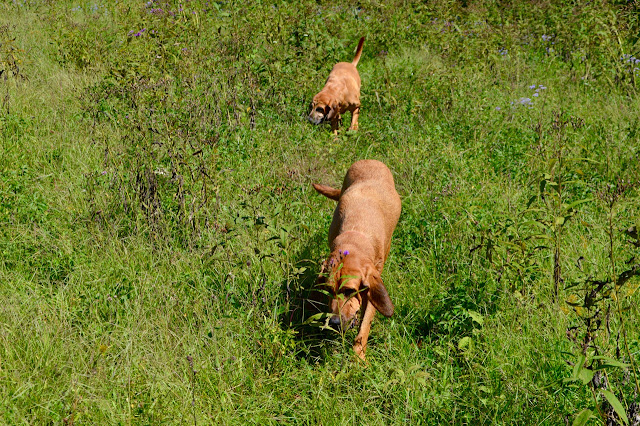 Heidi in the meantime hung out at the house and explored the yard. This is around 48 hours after her epsom salt soak and it's about the best her skin will look. It looks bad when compared to years ago when there was nothing going on but for the past 18 months, this skin is about the best it gets. 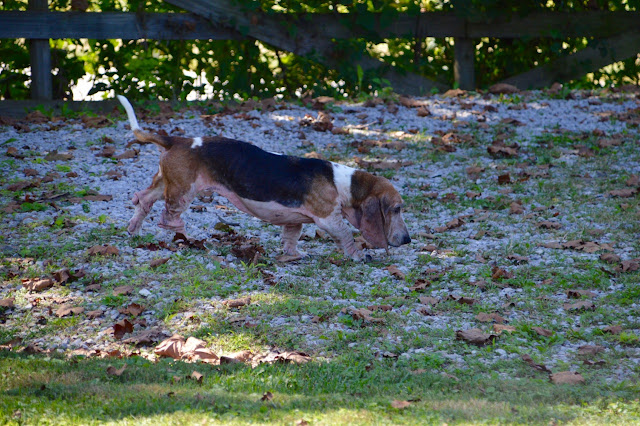 It never fails that when Sadie returns she always goes over to Heidi to see if she is okay, even at night when Heidi comes back inside the house after her last trip outside for the night. 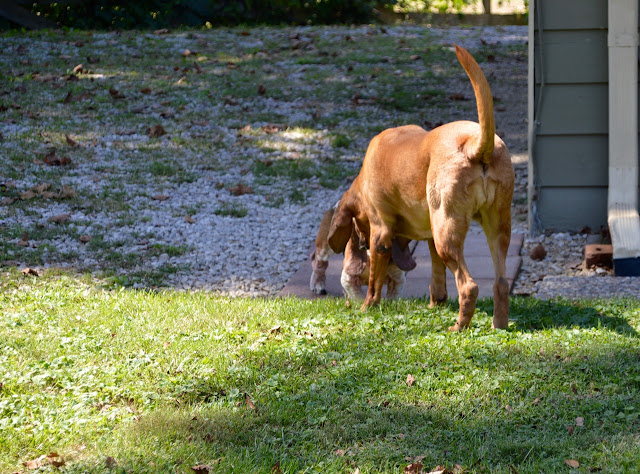 Once again she did not want to go on the walk after I carried her to the field. She turned and headed back to the house. 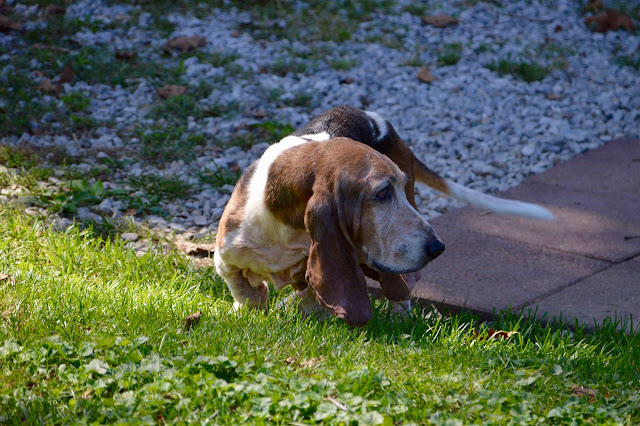 The rest of the day was spent learning the new Mac OS named Sierra, testing it and also trying some of the new features it has. I also found out from some geek sites that Safari had been update to the point of getting good reviews in tests ... so I tried it, liked it and then made it my default browser again over Google Chrome.

It was very sad to read the news about Bridget over at RVSue's blog. It's never easy losing an old friend.

If you don't hear from me ... I'll be out in Utah with Bud Shumway helping him investigate another mystery.

The weather is great again here in 'the tropics' of Southern Indiana.
at September 21, 2016