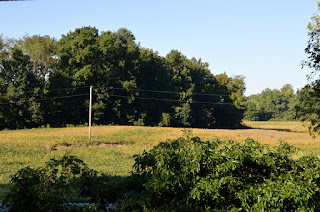 Monday started off beautiful, great weather and the next 7 days looks good in that regard. I had plans for a couple of tasks today. Getting up early, I felt recouped from my lack of sleep over the weekend.

Until I walked my face into that invisible spider web this morning as I went to take the daily photo from the rear corner of the house, facing the backyard. I don't know if this was the spider that built the web but when I glanced up at him, he was moving. By the time I took the photo and headed back to the house, he was in this position. 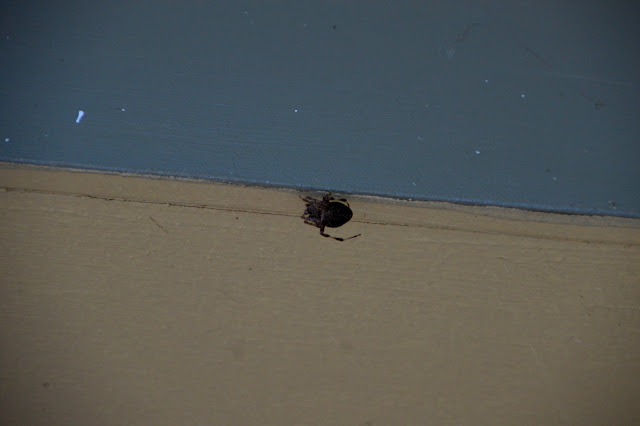 With that happening I realized today might be one of those 'critical days'. Remember 30-40 years ago when we were all into Biorhythms? For some reason I just remember the 'critical days' warnings.

Stella decided after walking to just the edge of the yard, it was too wet to go anywhere in the field, to do anything ... she headed back to the door and went back to sleep until lunch. 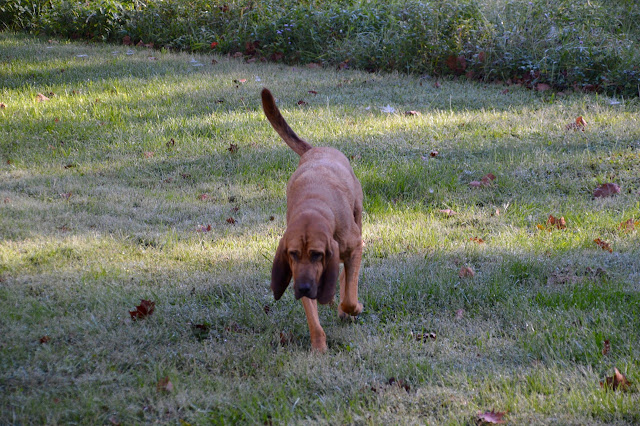 By leaving the car cover off the Z4 the past few weeks, I had some heavy blowing rain storms leave rain drop marks and some dust from the highway on the Z4 ... so it was going to get my first hand wash job. It was great weather to wash the car. 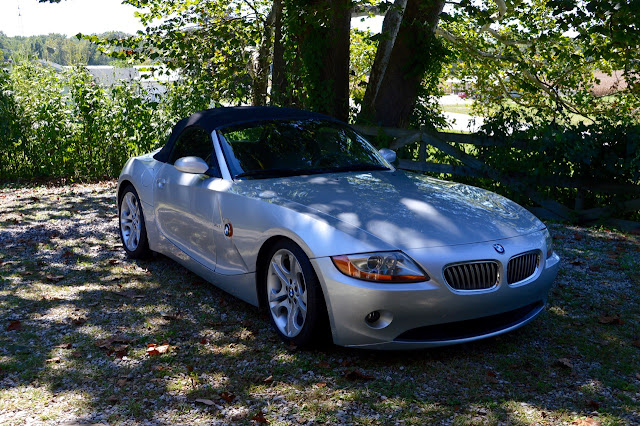 To keep Stella from wandering off while I washed the car, I pulled out the old 80ft tether and connected it out in the field so she would have some room to roam and hopefully cut down some of the giant ragweed in the field. All she did was protest by laying down in the field right by the yard ... and howled like she had lost her last friend. I guess she doesn't like that tether anymore like she use to. 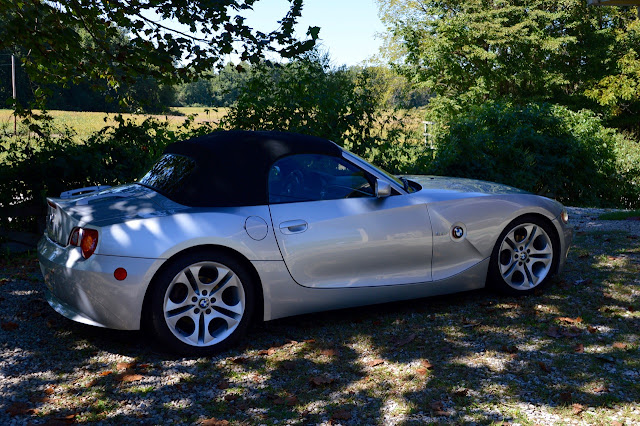 I knew Sadie would go out to her favorite spot in the field and she had not been going outside the 'boundary' so I didn't worry about her. Maybe an hour later, or when I finished drying off the car, putting the water hose away and setting my bucket, and wash mitt in the sun ... I started to look for Sadie because she had not returned to the house, like she normally does. That was odd.

Stella and I took off north into the field heading to Sadie's favorite spot ... she wasn't there. Yelling her name as I walked out into the field ... I didn't see her and that was quite odd with her. She never does that. I heard a lawn mower but she never stays around the house when I mow the yard like Stella does ... still, that meant the neighbor or neighbors were outside.

Could it be? I really hope not. If they go to the neighbors then they can also head out into the highway following their nose and ignoring their brain. I glance over at the neighbors house and he is on his riding mower, his wife is outside in the yard ... but no Sadie. Now I am getting more than a little concerned. 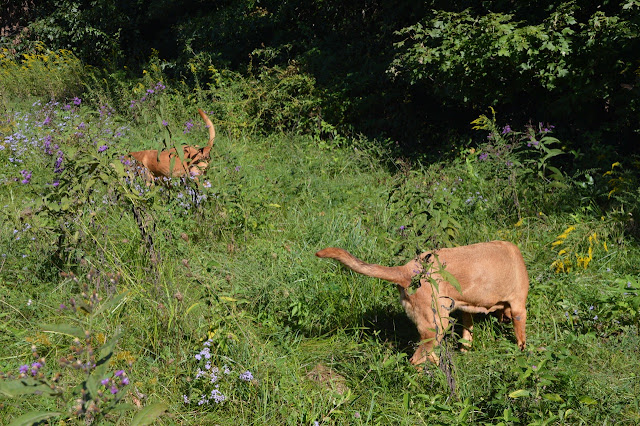 Just as I start to turn to go back to the house to get the FJ and start the dreaded drive to find her ... I see Sadie running in their front yard. They also live on a hill above the highway but it seems closer to the road than my house but isn't. 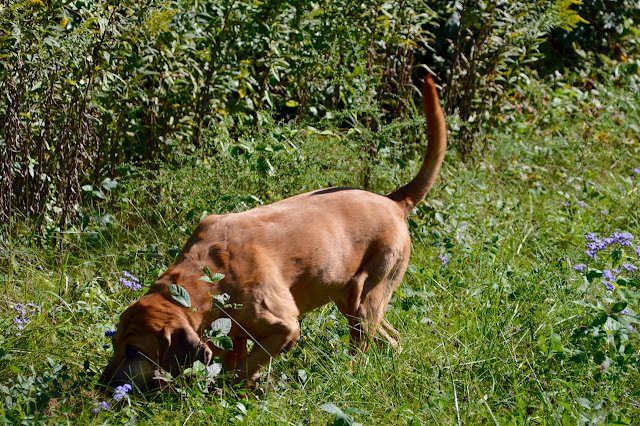 When she hears me yelling her name, she sprints into the field not toward me but the house. She knows she is in trouble. The neighbor was trying to talk over the sound of the mower, but she said that Sadie had been following her around the yard and garden. She knew it was my dog and it was okay with her that Sadie came over to visit. 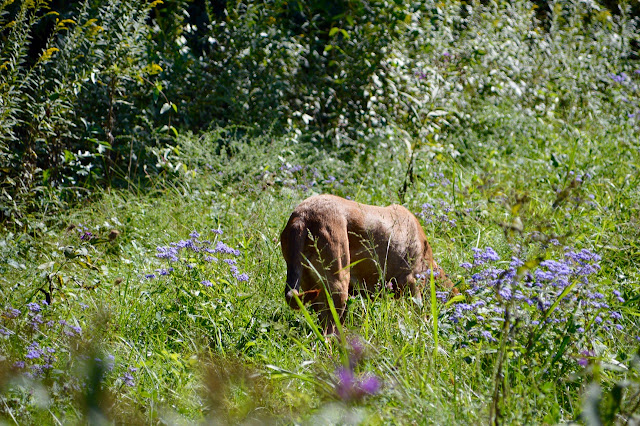 So within the last month both bloodhounds have gone way outside of their boundary when I left them alone to wander the field like they had for almost a year. I am debating whether to declare 'Marshall Law" but troops are stretched too thin to come to help me here in 'the tropics' ... so I will have to start some 'adult supervision' and only let them roam the field while I stand watching them while taking photos or am sitting in the backyard where I can stand and check on them ... at least until they cut the hay. Then I won't have to stand ... LOL. From now on, neither of them will be left outside to roam on their own anymore.

I just can't afford to make a mistake of giving them a chance to run into the highway, while they innocently follow their nose. 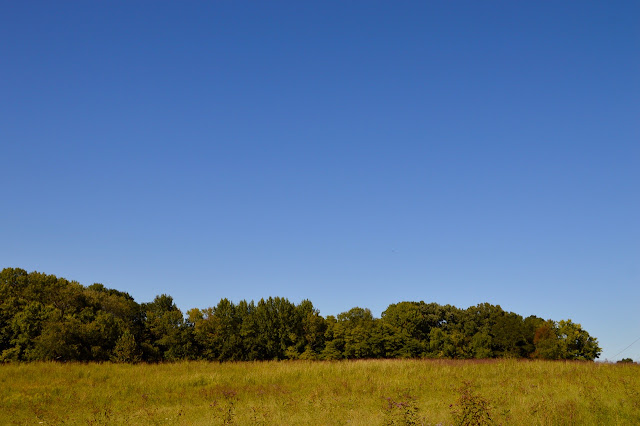 Other than that, it was a very productive day. After my two cups of coffee and some organic coconut sugar replacing the old granulated sugar ... normal morning reading of blogs, news, sports and emails ... I gave Heidi her 20 minute Epsom Salt soak. During that soak I will also take a wash rag and clean her stomach, armpits, legs and paws of any dead skin and/or dirt. The salts must have worked ... she eventually sat down in the deep bath water, laid her chin on the edge of the tub and fell asleep!!! 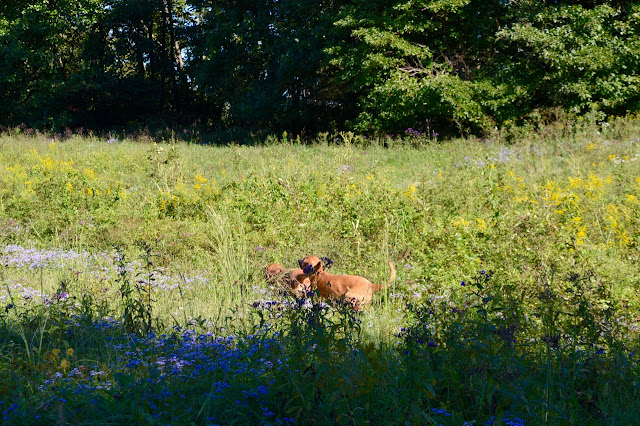 So besides the Sadie escapade, I had already given Heidi a soak, washed the Z4 all before 1pm ... a trip to buy groceries was next on the list. The daily hound walk would take place today back at the normal time of late afternoon. The photos of the walk have been the ones you have seen posted between my rambling paragraphs. 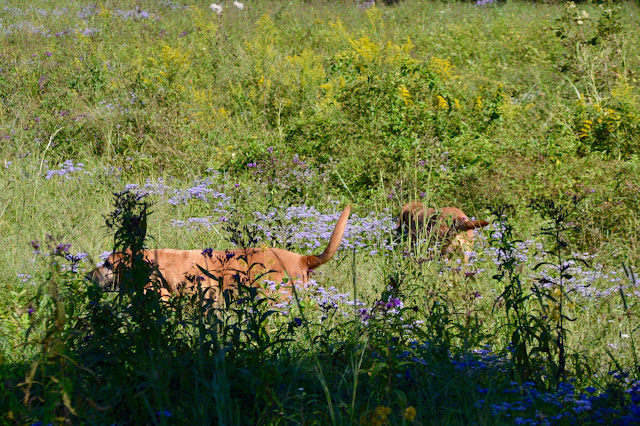 In May 2015 I started the Paleo Diet. I had good results, losing 15 pounds, a couple of inches around my gut, two inches on my waist and body fat was reduced 9mm. I loved it at times. At other times I 'wondered' if I was making the right decision ingesting that much fat with a family of heart problems on my dad's side of the family. I admit bacon tastes fantastic but all of that fat ......

Way back in history, in the 70's I was a strict vegetarian. I knew what it was like to eat that type of diet. I was also younger, weighed only a 160 and rode my bicycle training for racing roughly 400-450 miles per week. It's too long of a story to tell why I came back to what many consider a 'normal' american diet. I will say laziness was a big reason. 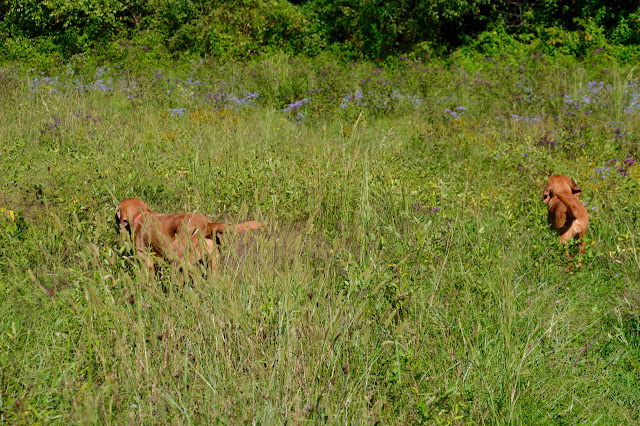 Over the past couple of months I had decreased the amount of red meat I was eating, decreased those trips to DQ and other fast food joints, less to no candy but I could feel myself falling off that wagon again. So about a month ago I started researching again about different diets. Not really diets but different ways of eating. 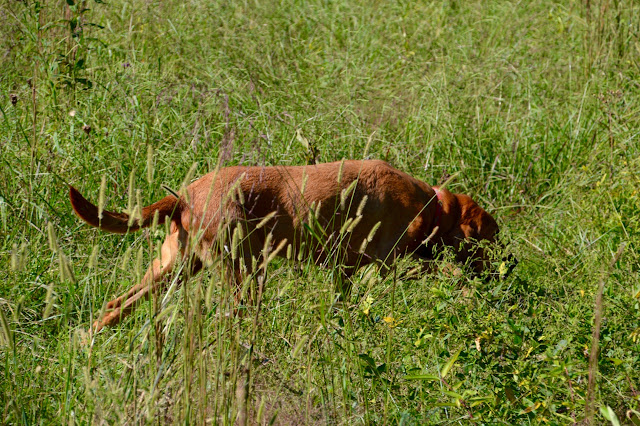 I had been leaning toward a lacto-vegetarian like before ... eating dairy, poultry and fish. Yet my digestive system hasn't liked dairy products like my brain does in recent years. I consider chickens as some of the filthiest animals in the world and those huge pens of cattle in Kanas out in the middle of nowhere always flashed into my mind after seeing them many years ago.

I could feel myself leaning "veggie" again. So with the decrease in eating meat, fish and chicken the past couple of months I was almost there anyway. It was that dairy getting in the way ... the ice cream, the yogurt with me needing TUMS later on in the middle of the night to survive. Could I really go to Nick's and not order my favorite strom or never head to 5Guy's again for their great burgers???? 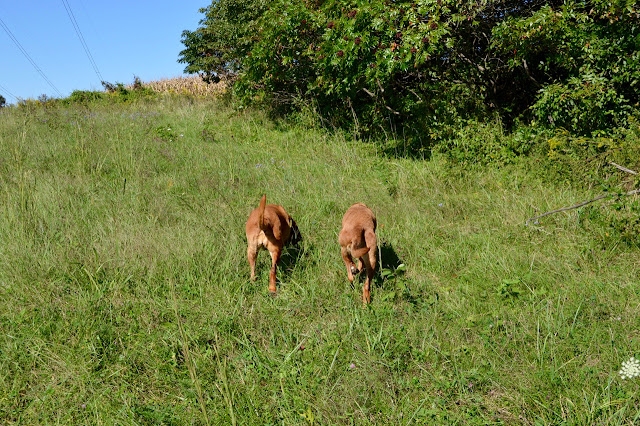 So last week I decided to go vegan. I started with a 3 day water fast and could have gone longer but started fresh vegetable juice on the 4th day. It will be a week tomorrow since I started this radial change in my eating habits. Hard as hell to get through 14 hours of college football on Saturday and 12 hours of NFL football on Sunday ... it wasn't the games ... it's those damn commercials with all the food you love to eat that made it hard. I survived. 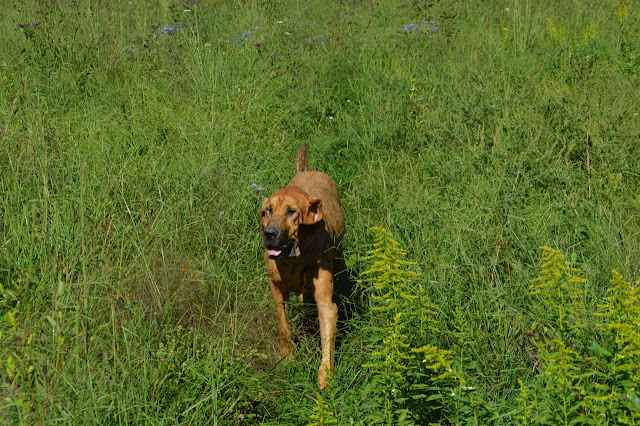 Yet, 3 weeks into the football season I have been able to survive the urge to buy junk food, all the stuff I use to eat non stop while watching football games in the fall. I know there will always be strong urges waiting around every corner for me.

Otherwise there are just really a few changes I made ... I went back grains, beans and legumes instead of fish, chicken and red meat. I've always been big on vegetables and fruits ... that is if I can keep Stella out of my fruit bowls sitting around the kitchen. 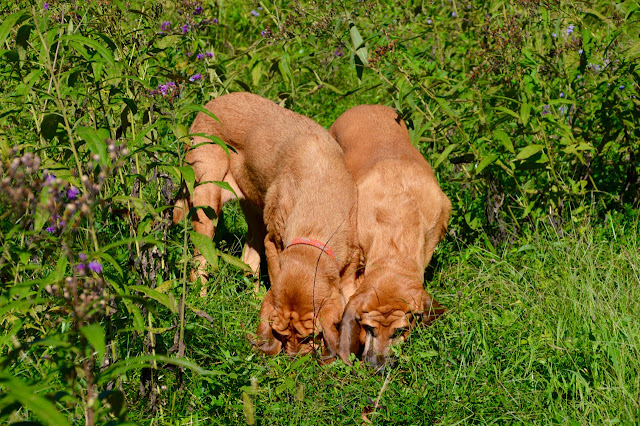 Losing weight is not the main objective ... it's the cholesterol, the triglycerides, feeling lighter, eat less foods that cause mucus build up and general inflammation throughout the body. I've always have had low blood pressure, low resting heart rate. I've passed the two stress tests with flying colors and I've made it to my mid 60's without a heart attack or by-pass surgery ... my dad and uncles did not. I just felt better getting back to fruits, vegetables, beans and nuts.

I will admit though it's really hard at times to get through those periods of around 20 minutes to go out and make a fast food run, order a pizza, or just run out for a tub of Ben&Jerry's Ice Cream ... I have found that drinking ice cold water during those urges kills the pain and it goes away.

I think the last picture of Sadie and Stella show once again they are pretty close friends and Stella has been great for not only me but also Sadie ... having another hound her size.

They will be on a 'short imaginary leash' though ... no more leaving them out of sight knowing they will come back. I gave them an inch and both of them ended up taking a mile.