A Chess Match Between The Hounds 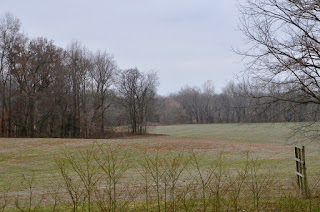 It was a little past 1am last night when Sadie and Stella woke up from sleeping in the living room while I was on the computer. That means it's time for their last trip outside before they sleep for the night.

Snow flurries were coming down lightly. There was nothing in the forecast showing we would have any snow this morning and that proved to be true.


We started a first walk of the day after lunch. I was actually warmer today at 24° because those 20mph winds out of the west yesterday were not around. In fact I couldn't feel any wind today on our walk. There were still those light snow flurries coming down during the walk but not heavy enough to be seen by the camera. 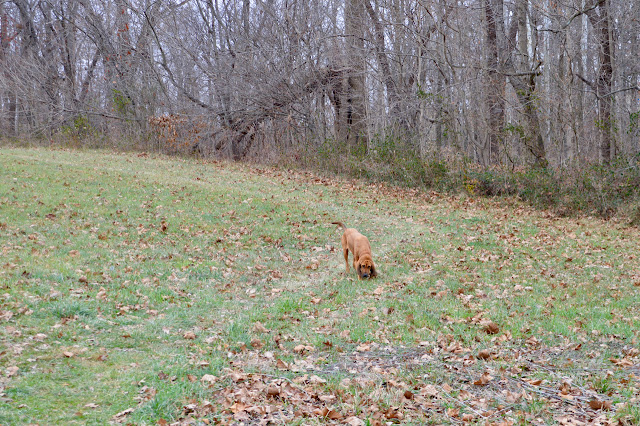 I thought Stella was going to lead the pack today for the first walk but she turned right around and headed back to the corner of the field next to the burn pile and yard. It must have been good for her because Sadie and I were about to make the first turn in the walk before Stella started to move in our direction. 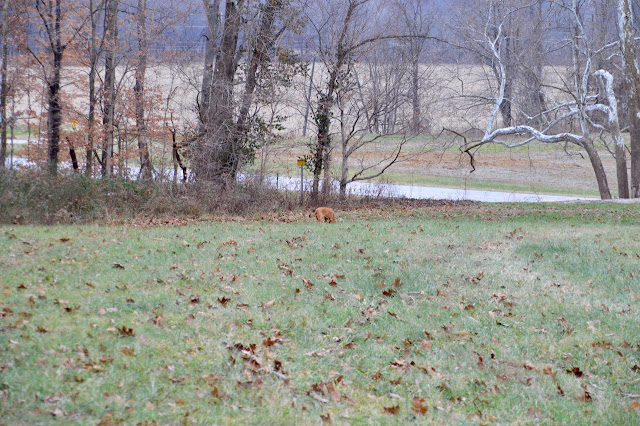 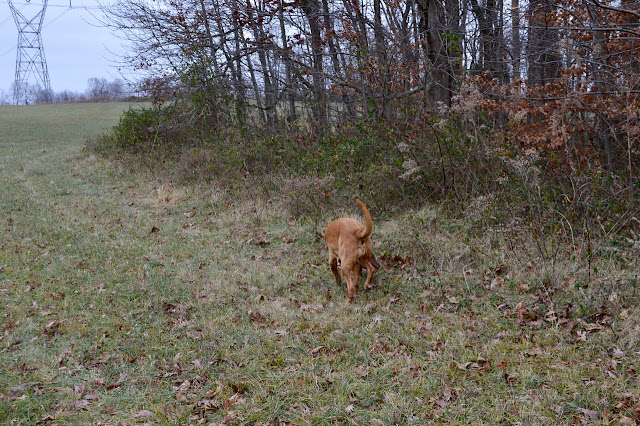 This shows just how much of an incline the field has toward the corner of my property.  Stella cannot be seen but she is there somewhere. 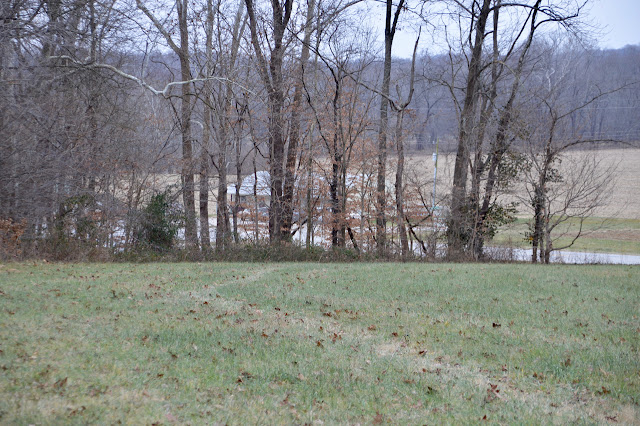 About the time I was about to make my turn and head to the back of the field, Stella popped up in my view finder on the camera. I can see this is almost her daily routine and one that I am getting tired of. I don't mind them going at their own pace but I know for her safety I have to walk up to her by the end of the walk to get her to move in our direction. That is usually out of the way from the direction we are moving. If I leave her and go back inside the house when the walk is finish, she usually ends up by the neighbors, which is not a good situation. Great neighbors but too close to the highway. 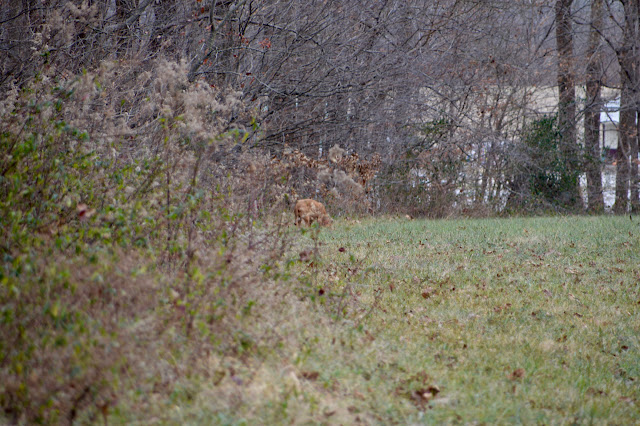 Sadie on the other hand was trained by Winston as a puppy on how to do the walk. Lagging behind is okay but always run to catch up on your own. She does that two or three different times during our walk. 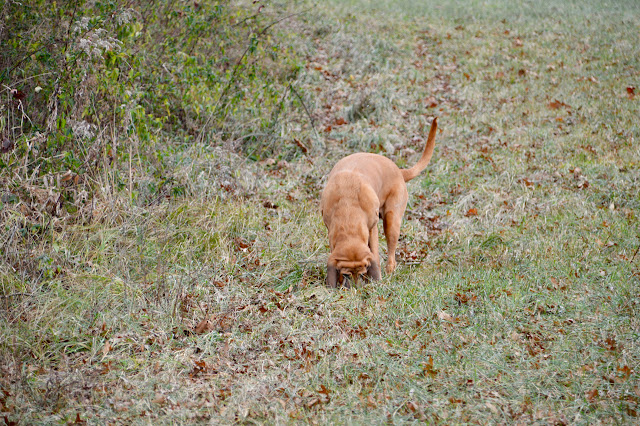 Once Stella came sprinting around the corner to catch Sadie, she never stopped and both of them headed to the far right corner. I followed them because I knew it was the only way I was going to get stubborn Stella to keep moving in our direction. 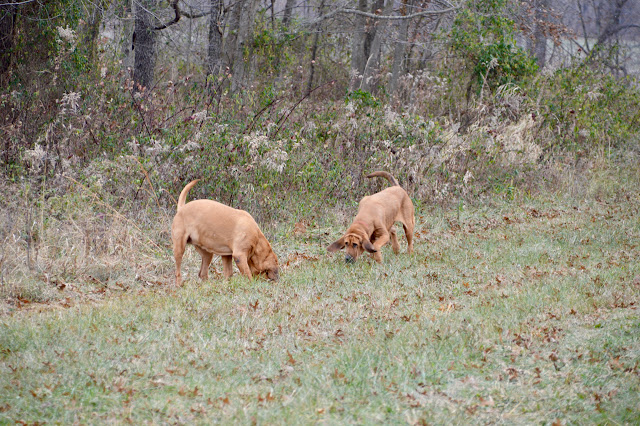 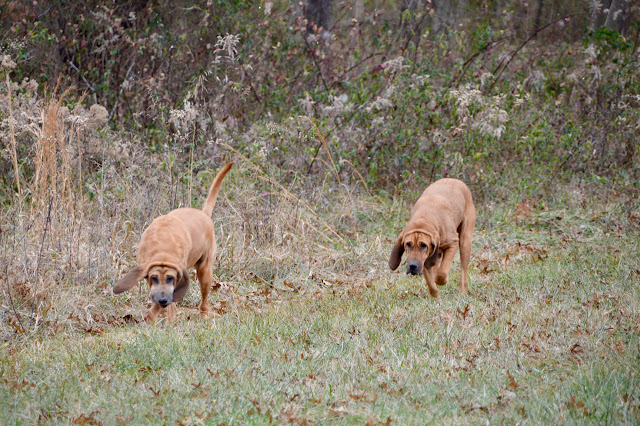 The camera does not pick up their speed ... but they are on a full out sprint. 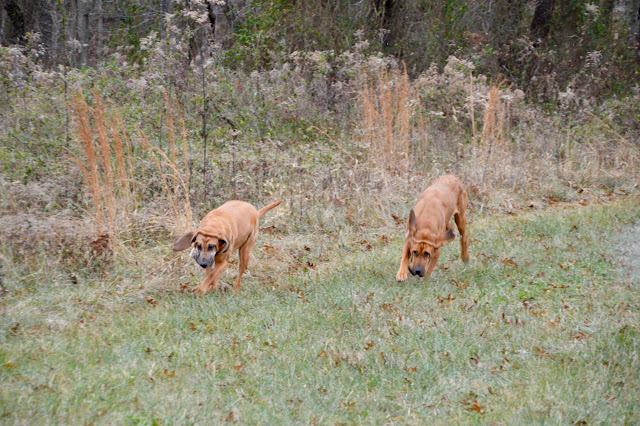 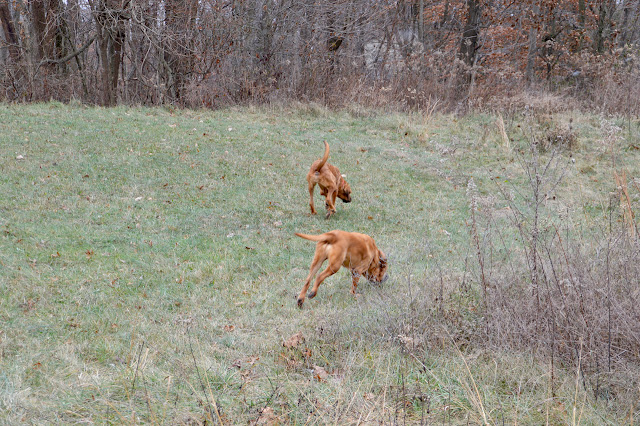 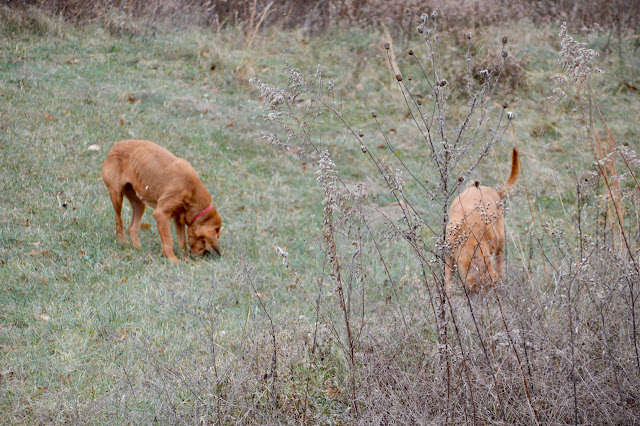 Stella gradually moved on her own toward the back of the field, which surprised me. 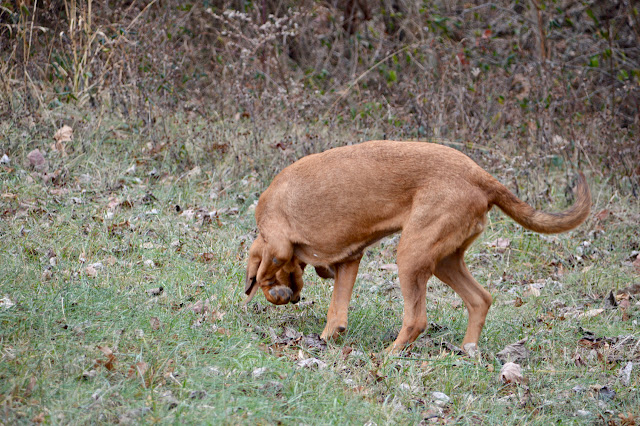 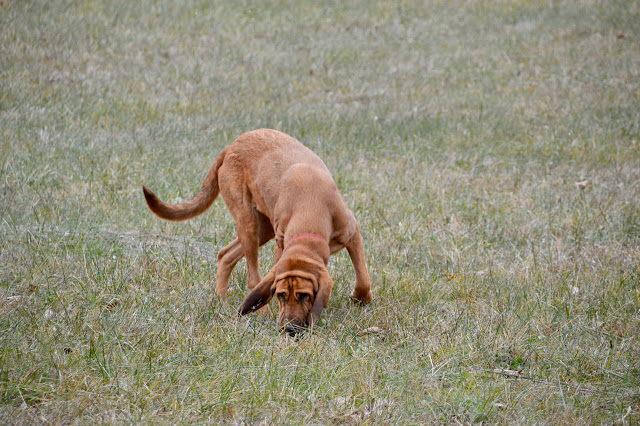 Once one of them found something the other had to join, not to miss anything. 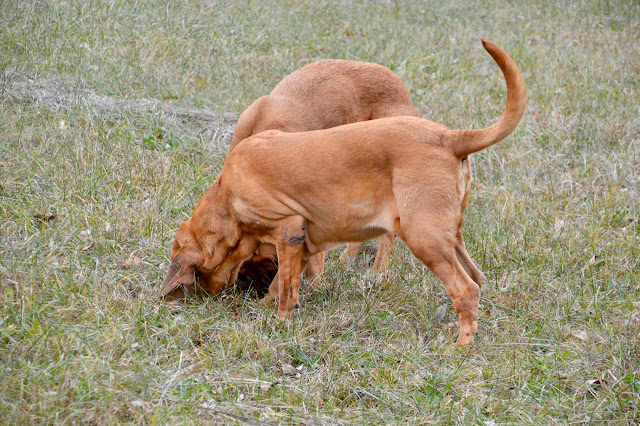 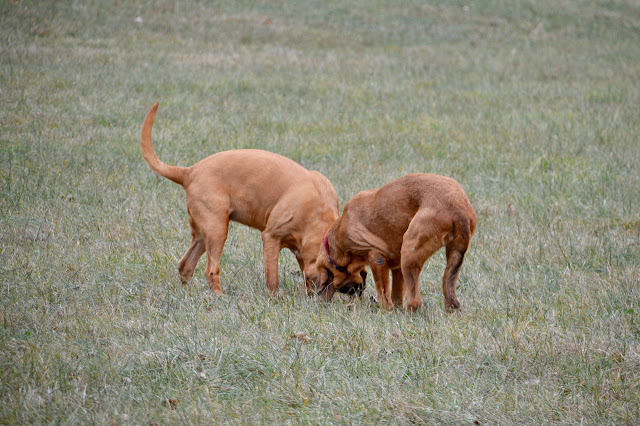 By the time I made the final turn home, they both ran by me and sprinted ahead. I honestly think they have figured out if they do that, they can enjoy what they find before I get there and tell them to "come on". 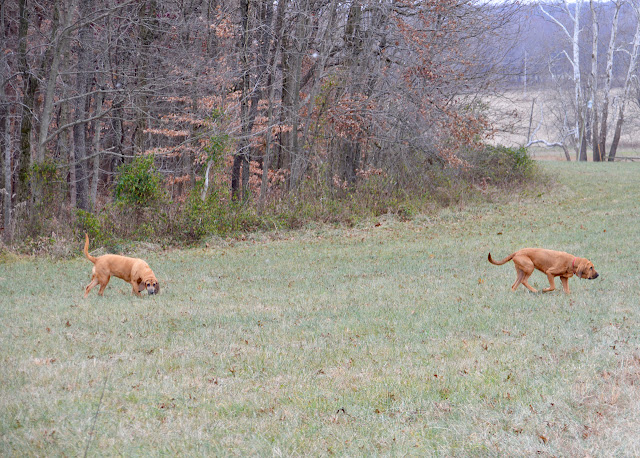 Yet, there is never a direct path with them because their noses pick up to many signals. 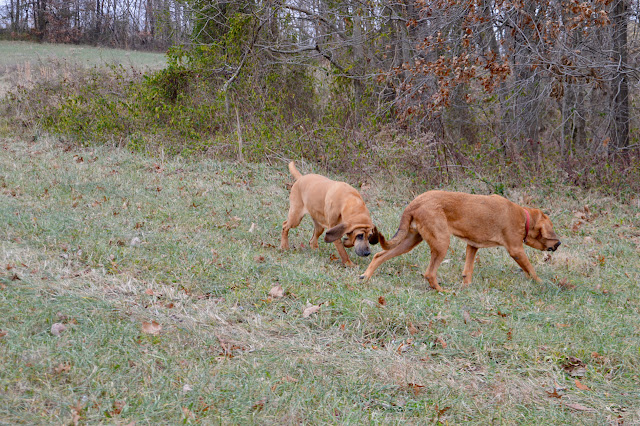 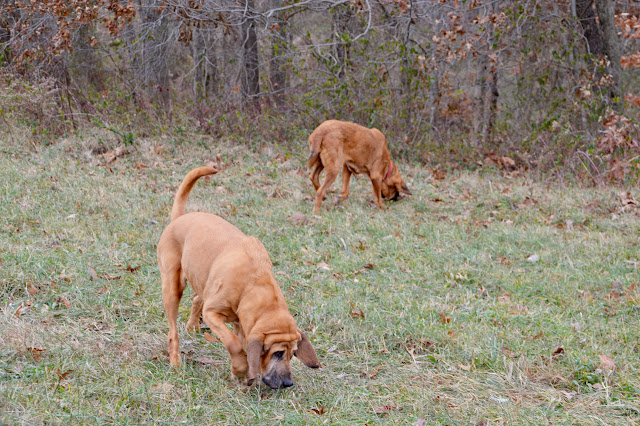 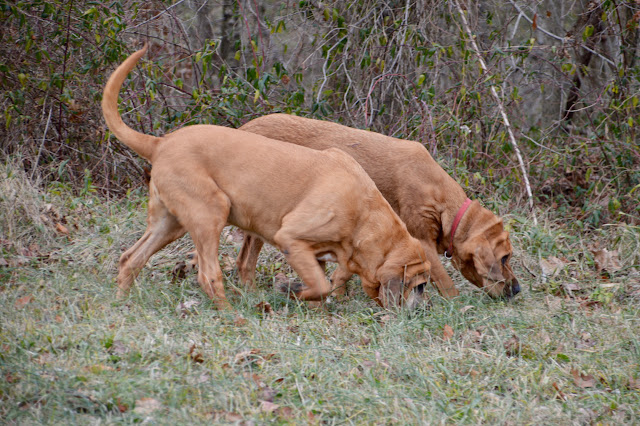 My ice sculpture is interesting. You see the height of the structure well that was flat yesterday and barely above the wood window ledge. What is interesting, there is no signs of water dripping from above, no signs or condensation running down the glass onto the ledge toward that stack of ice ... any ideas on the source of water? 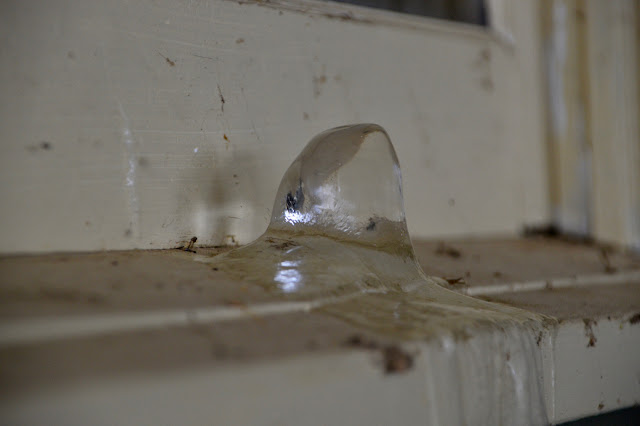 With the discussion of a few bloggers about the sharpness of the photos posted on their blogs, Ed commented this morning on the post that I did yesterday, that he found there was a size difference in the same picture I posted here on Blogger and my Wordpress blog. As many of you know, the larger the size, the more pixels it has and that results in a sharper clearer picture.

In my Wordpress blog, they give me a choice from three different sizes for my 'default' size, Blogger does not. I believe I can go into my Blogger template and instead of 'customizing' my template I can click the button "edit html' and change the size of the default pictures in their html code.

To see if there was a difference that was noticeable, today I exported my photos from my Apple photos program on my computer using the picture quality 'maximum' setting. That doubled the size of the file from ~500kb to over a 1mb for each picture. I think it's safe to assume that since it took forever to upload the pictures from my computer to the blog while writing this post, it will take you longer to load the pictures after you open my blog.

IT WILL NOT REMAIN THAT WAY IN FUTURE POSTS.

I'll change the setting back to 'large' after this post and that will reduce the size back to ~500kb and thus will let the page load faster when you open the blog. But right now I want to keep these pictures as they are to see if you notice any kind of picture quality difference.

I have always been a fan of Jason Bourne movies. Actually I became a fan after the first book I read by Robert Ludlam titled The Bourne Identity back in the 80's. So when I received an email yesterday that the latest Jason Bourne movie was showing on Directv I decided 'movie night' would be one day earlier.

As usual it had all the action you needed, drama, mystery etc ... but I can't say that it was the best of all of them, even with Matt Damon returning to play the character Jason Bourne. They did end it like all their other movies where the story can continue ... but I wonder if this story has ran it's course like most series do. The same thing happened with three of my other all-time favorite shows: Dexter, Breaking Bad and Homeland, they run out of things to write about or their best writers move to start a new show.

What makes someone always wanting to trade cars?

Is it a poor diet, poor DNA, possible mental problems, lack of activity, ... what? I am serious about the question but those possible reasons are listed in a jokingly manner. The reason I ask, every since I traded my Voodoo Blue FJ, I continue to look at different cars, some not even an SUV to trade for. I HAVE NO REASON TO TRADE EITHER CAR I HAVE ... plus it's expensive and a waste of money trading card frequently.

I went over two years having zero urges to trade cars. I had the two cars I was happy with but every since I made the trade in late October, I cannot stop to look at other cars that are for sale. It's just not look but a strong urge to make a trade. It's strong enough that I have come close a couple of times of calling the dealership or sending an email to inquire about the car.

The highlight of the day so far is the "silent chess match" between Sadie and Stella over water. It started right after we came inside after our walk earlier this afternoon. Stella sat next to my desk chair while Sadie laid stretched out on the floor next to the water bowl. Sadie thinks it is her water and will protect it most of the time. Stella sat next to me and looked down at her ... motionless. Then she decided to step on Sadie's stomach.

Stella then started to walk on her until Sadie got up fast enough to prevent being walked on and jumped up to the side of the doorway but turned to watch the water bowl, as Stella stopped. For almost 30 minutes straight ... they both looked at each other without a sound, without a move. Then Stella would lower her head and stare at the water bowl which by now is right in front of her and available to drink out of. Nothing blocking her if she tried to drink.

It took another 30 minutes before Stella walked out to Sadie who was sitting in the hallway, turn round and walk all the way over to my desk chair and then move into the water bowl from behind it, the furthest side from Sadie. Sadie then did not care that Stella was drinking 'her' water.

It's a pretty quiet and cold day again in 'the tropics' of southern Indiana.
at December 09, 2016