It Was Wet & Freezing Today

It was one of those afternoons that it didn't matter what you wore to stay warm, it wasn't enough. Even Sadie and Stella did not venture off into the field on their own like they normally do and once they saw me head for the door, the sprinted to get ahead of me. It was really wet, really freezing cold and the daily afternoon walk was cancelled. 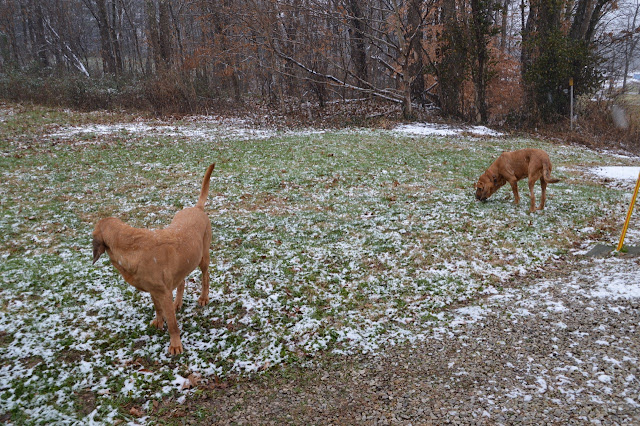 So there are not any pictures of a walk. They slept, I read and replied to blog comments. There are a lot of 'bells and whistles' that come with this road eating monster and some that I will not bother to set up. A lot of nice standard features.
I thought it was strange when the dealer didn't give me a temporary plate since I had a truck plate on the FJ and would need to change that to a car plate once I received their title in the mail and registere the car. But the car lot owner who has been in the biz for 45 years said no, this plate would be okay to drive with ... so the truck plate was switched from the FJ to the car.
I was curious enough to call the BMV today and ask if a Countryman was able to use a truck plate and it isn't because it's listed as a passenger car but not as a SUV. I guess I'll find out if I am ever stopped between now and my trip to the BMV. 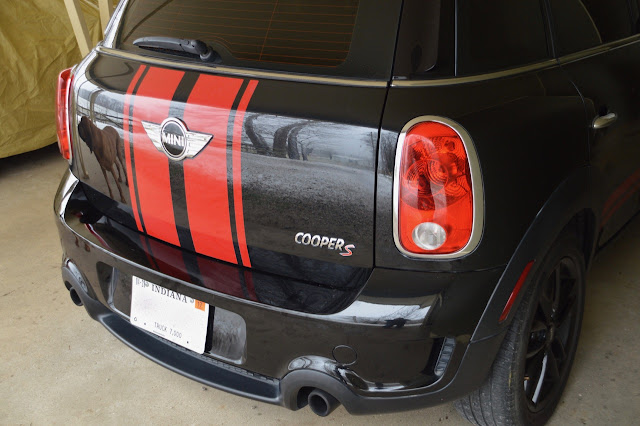 It drives nice and lot different than the other two Mini Cooper's I have had. About 500-600 pounds heavier. The seats are very comfortable as the padding fits around each side of you, almost like a racing seat. These tires are Run Flat, so the ride is a little hard but once I buy new tires I will be going to the regular Radials, all weather. I still don't mind the hard ride.

Ed commented today about jacking my car up and putting on oversized wheels, so this next picture is for him, to see what the possibilities are. LOL 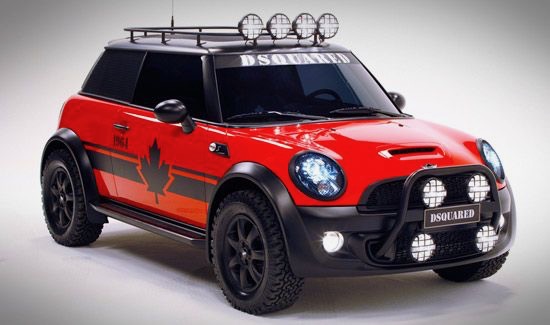 I've never liked the type of bike rack that connected to the trailer hitch. But here is a picture of one working with 3 mountain bikes. 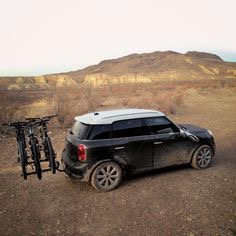 I was asked today if I had a case of buyers remorse yet and I can say I haven't. In fact it's one of those cars that you just want to go out and drive around in, something I didn't feel in the last FJ but did when I bought the blue FJ and my Z4.

It is nice not to hear the whining of the rear axle that I had in the FJ. After another day of driving this car I can see it serving the same purpose as the Z4 even though they are two different kind of cars. I'll not make any decision on the Z4 until I can drive it again this spring with the top down and the sunshine is hot, not just shining.

I realized tonight it's a full moon ... no wonder I came up with this idea about trading vehicles and no wonder the bloodhounds have been a little more bizarre than they normally are.

'Movie night' tonight ... not sure what I'll find on tv or what I pull off the shelf.

A full moon tonight in 'the tropics' of southern Indiana.
at December 13, 2016
Email ThisBlogThis!Share to TwitterShare to FacebookShare to Pinterest
Labels: 2012 Mini Cooper S Countryman