The Hounds Check Out The Mini Cooper 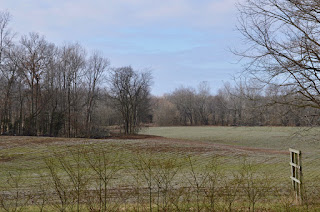 What a day!!! I didn't plan to have all of this happen in one day but it did and most of the action I am sorry to say was not photographed due to the requirement of me sprinting after the hounds.

I took a trip out of town this morning, the new 'Countryman' drove fantastic. It's quiet, economical and fast when I need it to be. I'm getting 34.5 mpg for all types of driving. By the time I returned home the hounds ate their lunch and it was perfect timing for a walk. I still needed a jacket but the weather was fantastic.

I would have liked to have seen this machine in action. I guess the tree cutting job from two days ago wasn't all that was in their plans. 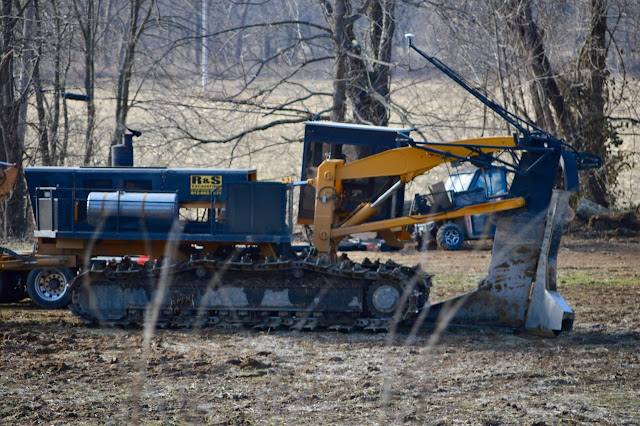 It was warm enough I thought Heidi was going to turn and go with us. She got about two steps into the backyard as we were leaving ... then turned and sprinted to the house. I went back to let her inside to keep warm while the bloodhounds and I walked. 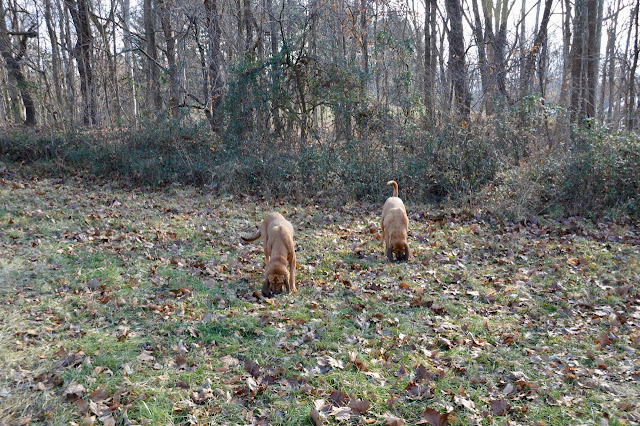 Once again Stella had a good walk. There was just one time she lagged behind but about the time I turned to check on her she came sprinting by me to catch Sadie.

Sadie is the one that always her tail curled upward when her nose is on the ground. 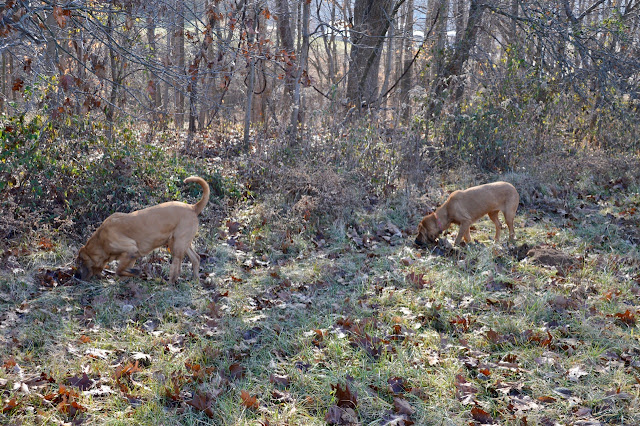 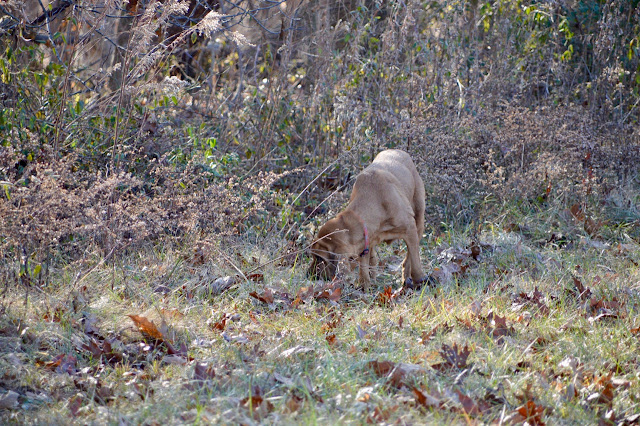 While she was behind, Sadie had her nose to the path and took off sprinting . I didn't see any deer on the horizon. She ran non-stop all the way to the back of the field, then along the path we follow all the way over to the large electrical power lines tower. 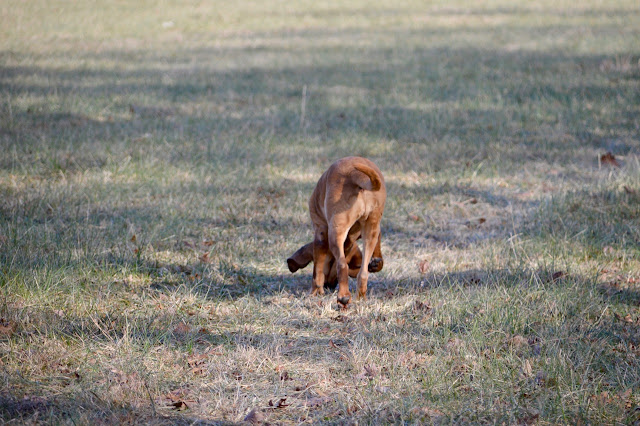 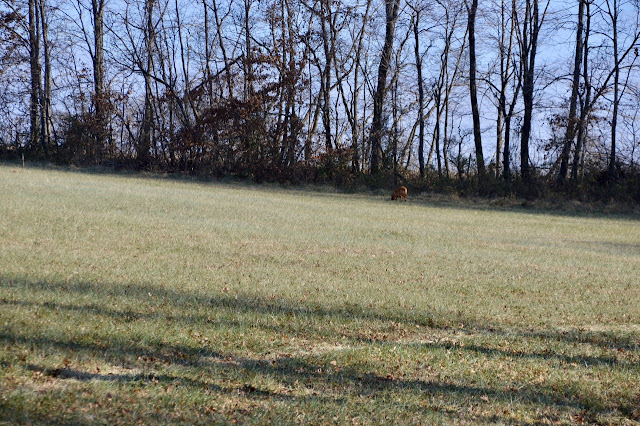 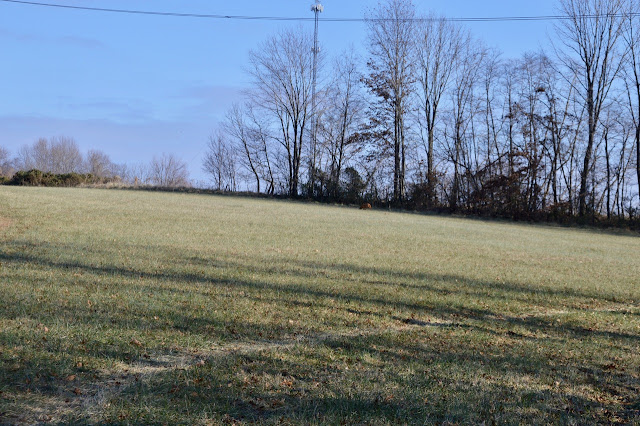 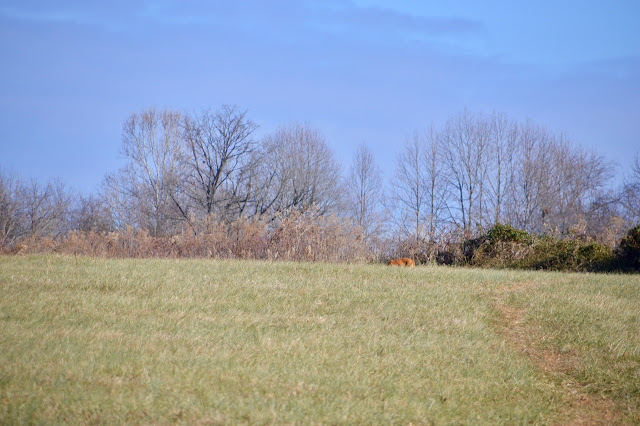 I guess she had seen enough or found her answer, as she glanced up then turned and headed my direction at a full speed run. 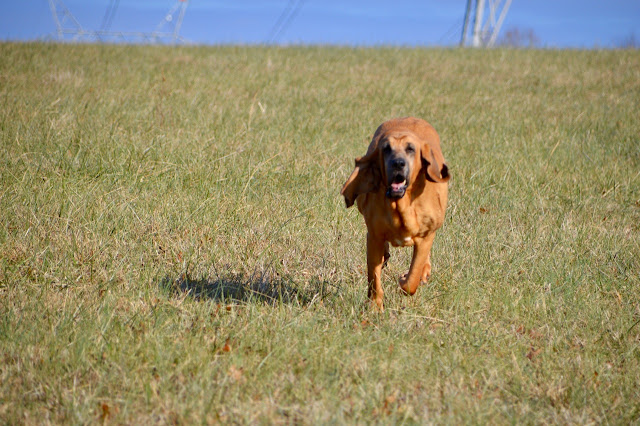 This is where Stella sprinted by me to catch Sadie and they took off for the corner. 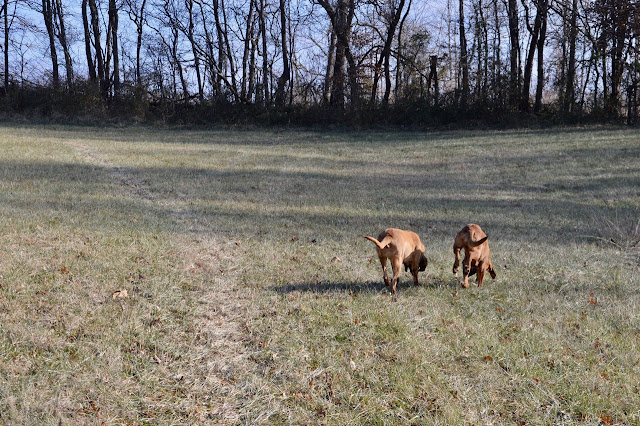 Stella came our direction every time I called her. 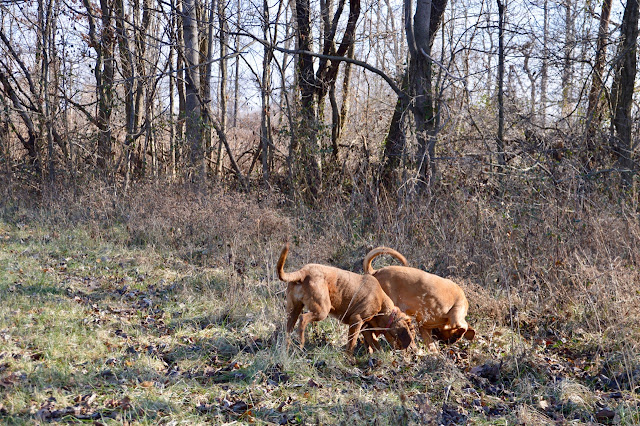 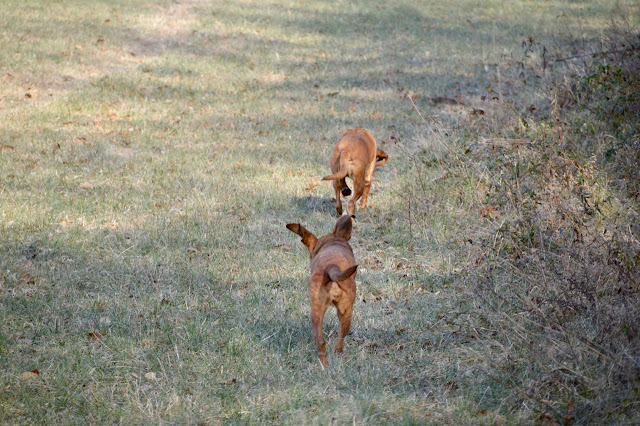 On the way back I saw something going on in the part of the field that I can't see from my house nor do I photograph this part of the field across the highway.  I was pretty sure they were laying some new underground drainage. 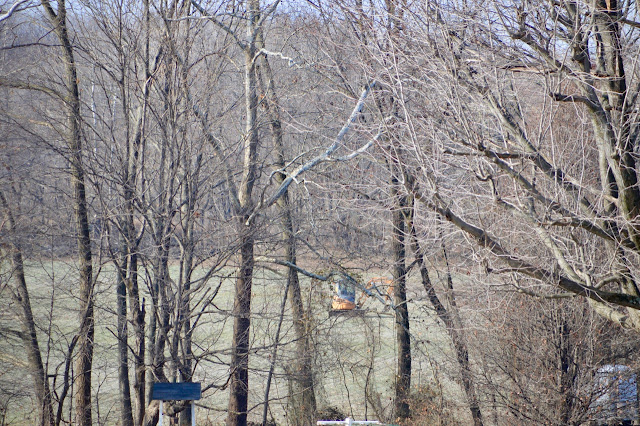 Looks like I guessed correctly. The last system them put in, within view of the house, in fact it's in the first picture of the day every day, has worked very well for them with little to no flooding. 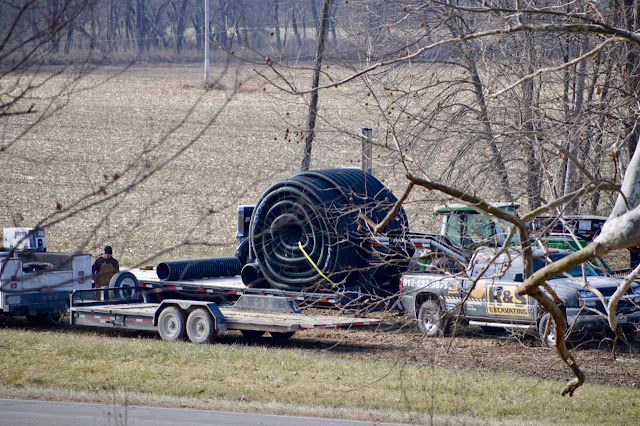 The past couple of days I've thought about testing the bloodhounds inside the Mini Cooper S Countryman. For those that are unfamiliar with the model, it is bigger inside than their smaller convertibles or hardtops. It's their version of a SUV, similar to the BMW X-1. With the seats folded down I have 41 cu inches for storage or hounds riding.

I wanted to make sure they fit in the back for the times we go to the vet for regular shots and checkups and hopefully never an emergency. The back seats laid down but there was a large gap between the seats so I'll need to fill that in with an extra rolled up blanket. 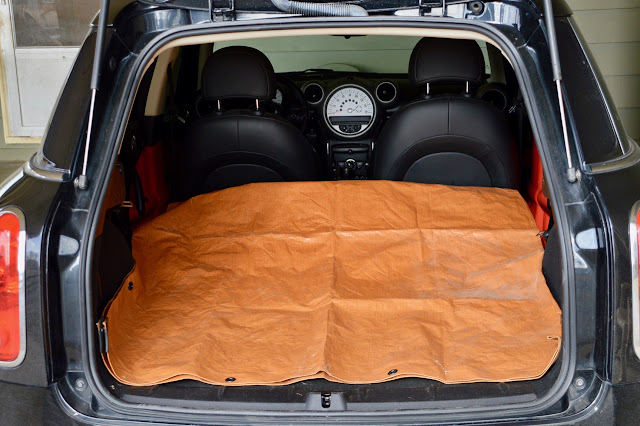 It is 43" wide, no wheel wells to worked around and is 5' from the back of the seats to the back door. Remember I did not buy this car to take cross country with the hounds like we did in June 2015.  Otherwise I would have kept the FJ.

Sadie was inside long enough to turn around, sit down for one second and not any longer, then decided she had seen enough. She had plenty of head room when she sat down but I couldn't take a picture fast enough. She wanted the FJ back. 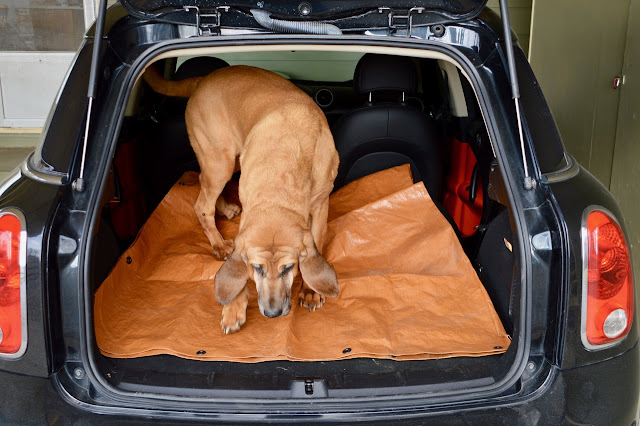 Stella was like 'a bull in a china shop' ... she danced a little in the back and then jump up into the front passenger seat checking out all the new places she could sling her drool. She wouldn't come out the back, I had to open the drivers door for her. By that time she was moving to the driver side and didn't care what she was stepping on ... as usual. 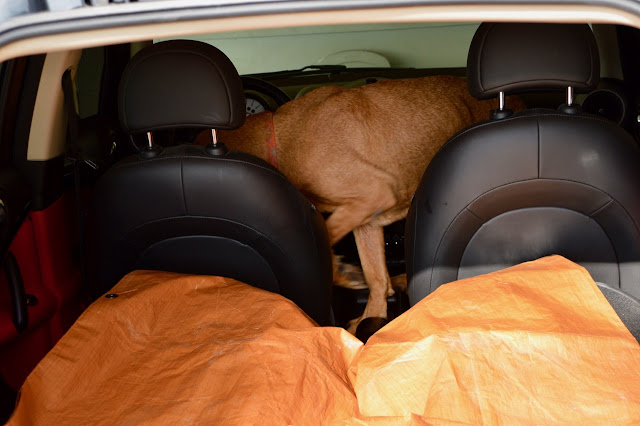 It was a good test and definite confirmation that the hounds will only go in the car the times we need to go to the vet. Plus when I bought this I no longer planned on taking them everywhere like I did in the FJ. Too much hair over a period of time and too much drool. 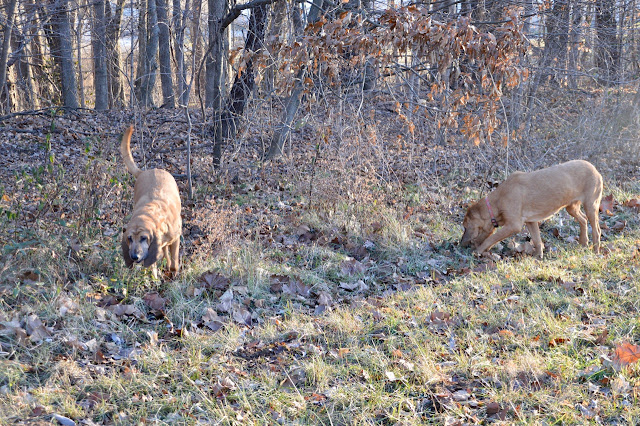 The excitement of the day, month or even for the year 2016 took place not long after the hounds jumped out of the car and went back to the field. While I was vacuuming what dog hair had migrated like a magnet to the black cloth interior ... plus wiping off all of Stella's paw prints from the front seats, sunglasses case and the driver seat .... they were back in the field doing what they do best ... exploring.

It wasn't more than ten minutes when I last checked them and it was just pure luck that I checked them when I did. They were gone, I couldn't believe they had disappeared that fast unless they saw deer or another animal. But I didn't have my glasses on and things in the distance are not that clear.

Well I see something in the wooded area and instantly I thought they were hunters. I'm not a hunter so I don't know if it's hunting season but that was my first impulsive thought. Then I see what I think are Sadie and Stella.

In the 19 years and 10 months that I have lived here I never seen anyone in the wooded area directly behind my house. So I wasn't sure what was happening.

My next thought was wondering what they were going to do to the bloodhounds since they were probably as surprised as the hounds were. About that time a dog runs out of the woods flying ... looked like a Springer Spaniel. Of course Sadie and Stella are chasing it full speed with no chance of catching them.

My concern once again is having the hounds in their state of "being oblivious to anything" and running into trouble. This time they had gone further than they ever had as far as houses along the side of the road.

The neighbor that owns the field lives two houses away and on occasion will drive his pickup truck around the edge of the field to look around, as he did two days ago. I found out the people I saw were his his older son and grandson. We walked together to their house wondering how far both of our dogs were going to run to. They are from Houston Texas, visiting for Christmas.

So instead of hunters it was only neighbors taking pictures and walking with their dog not knowing they were going to run into Sadie and Stella. When they saw me arriving they ran over to me acting proudly of their discovery and were anxious to get back home. I walked as they trotted way out in front of me .... then straight to their water bowl once inside.

My next plan of the day was to rearrange my computer room plus a couple of different closets. I wanted my computer room back to where ithad very little in it plus some things in a different location. That took the rest of the afternoon ... it was very good that the computer booted up and worked after turning it off, unplugging everything and moving it.

The dog food containers have been moved out of the way, of coarse the water bowl and food dishes will remain in the same spots to prevent any confusion for the hounds.

We tried another walk late in the afternoon but didn't get much further than the first corner with the camera. Stella heard gun shots, maybe an early Christmas gift or just practicing. It doesn't matter what it is, she is not a fan of gun shots.

So the camera was turned off, the 6' leash pulled out of my jacket pocket and we did the rest of the walk with her on a leash walking as close to me as possible since the rounds were being fired most of the way. She was so close to me walking I doubt that I needed to put the leash on her for her own protection.

Here she hears her first shot. 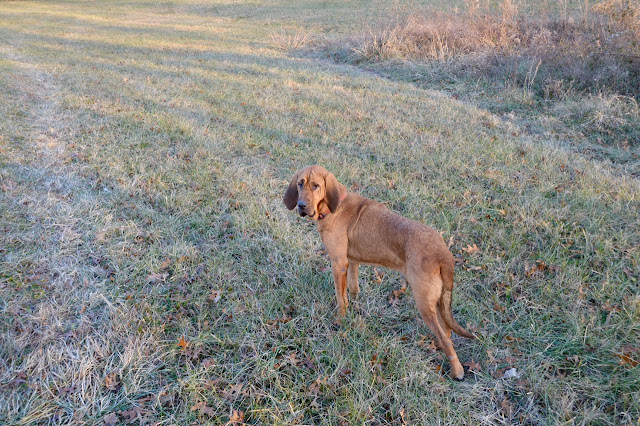 Since I moved the indoor bicycle trainer out of the computer room ... I am going to assemble that to one of my road bicycles and start riding indoors this winter. It attaches to the back axle. The mountain bike is ready to go for trips through the field in back, without the hounds. I am not sure how that is going to work out.

Heidi is eating as much food as ever but not gaining weight that can be seen by the human eye. She doesn't seem to mind and has her own routine and that has never changed since the time I got her in 2011.

She came with no records since she was a multi visitor to her local shelter as a runaway. Of coarse when she went to GABR basset rescue they had the vet do a thorough exam and he thought at that time she might around 2-1/2 years old. So we have always named December as her birthday, which means she was 8 years sometime this month.

Beautiful weather here today in 'the tropics' of southern Indiana.
at December 22, 2016