The Hounds Love This Weather 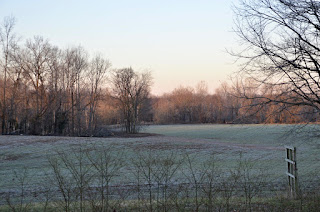 It may not be their favorite weather, who's to know, but they seem energized when it's near 32° and sunny. The key word there is ... sunny.

The warm temps yesterday were a nice change of pace but really today is nice, just a little cooler but nothing major.

Before my last drink of coffee, Sadie had talked me into taking the first of two daily walks. It was perfect timing really because I needed to do some errands before the week starts and they could get a walk in before I left. That also seems to help Stella's anxiety when I leave. 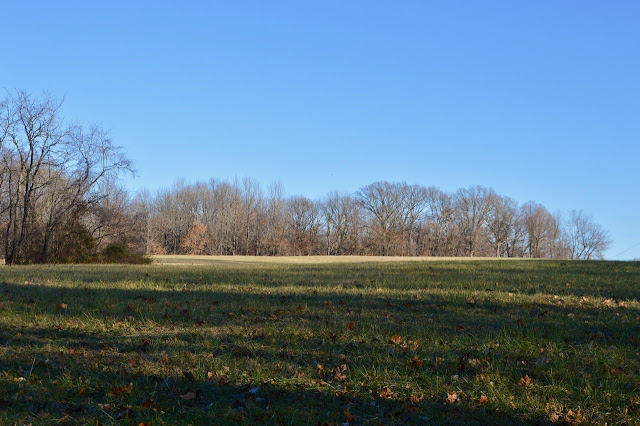 Speaking of energized, Stella moved out to lead the walk from the start. That didn't last too long, at least in the beginning. As I turned to see where she was ... she was nowhere to be seen. Did she go down into the steep gully? I couldn't see her as I scanned the wooded area. 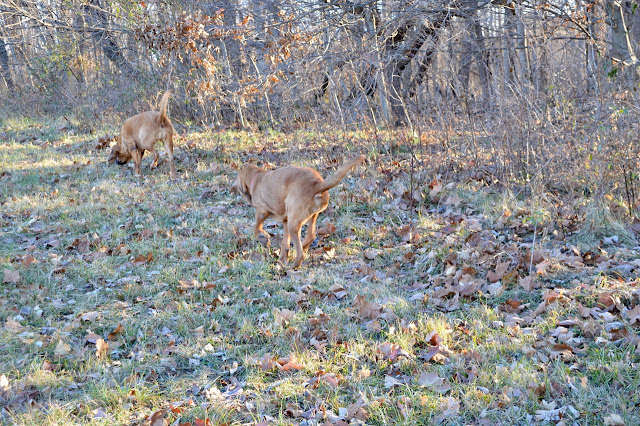 Then, just barely I caught her tan coat hidden among the dormant bushes. Maybe it's just my eyes but you can see how hard it is to see her in this next picture. 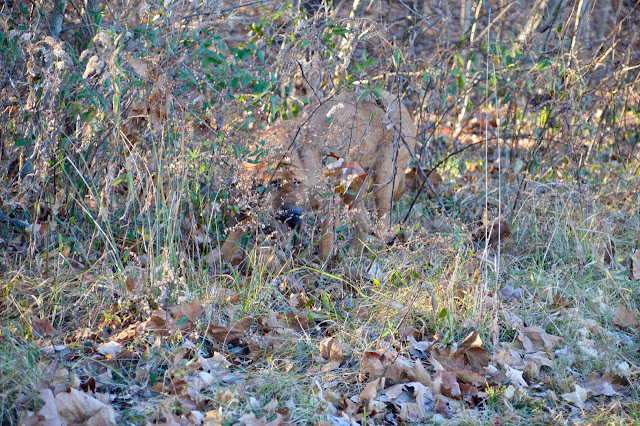 She scrambled out of there when I called her name and took off getting back into the lead. The light frost on the grass made each step 'crunchy' but with the sunshine out, it didn't feel that cold. 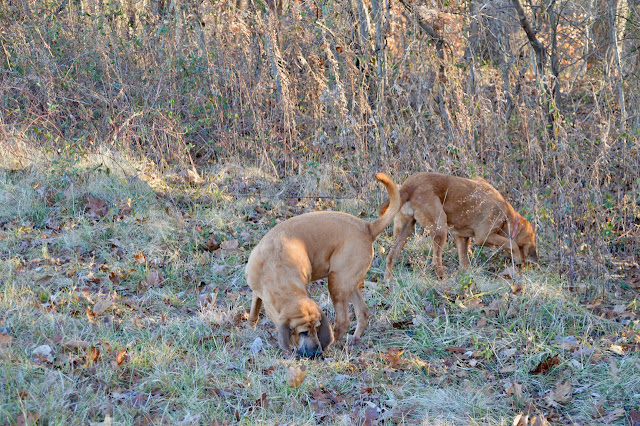 I am not sure what they were tracking but they didn't stop today anywhere they normally do. They veered around that first corner and took off with tails curled into the air and noses to the ground. 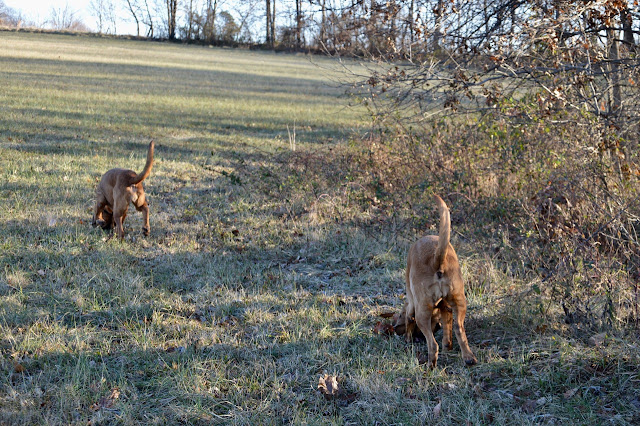 It was quite surprising to me that Stella was out in front and not spending a lot of time investigation different places she normally stops. I was beginning to wonder if she was going to run off as Sadie and I hung back. 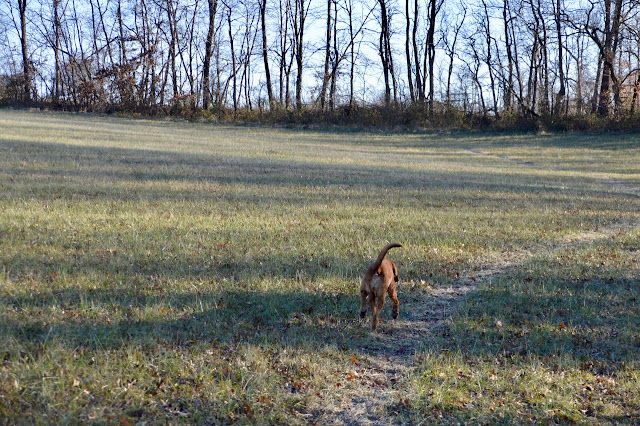 They decided today that two noses are better than one. A lot of places on this walk today they were either next to each other or within a few feet of each other. 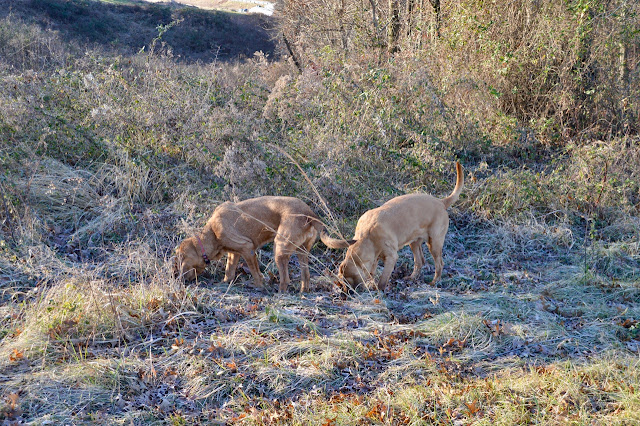 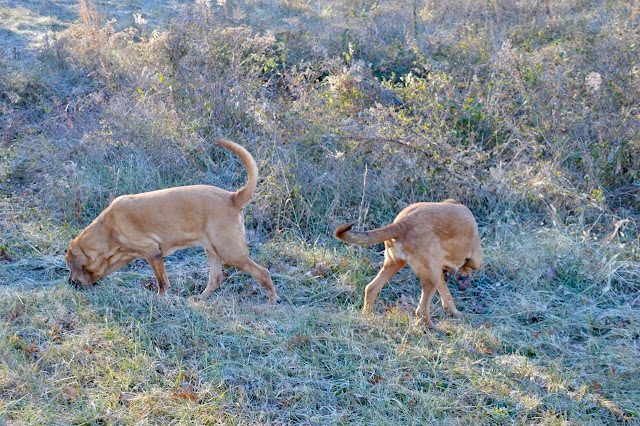 The path you see that the hounds are on, is a path of deer traffic. A lot of the grass is mashed down year round and it's one the hounds take every time they move to the far right corner of the field. 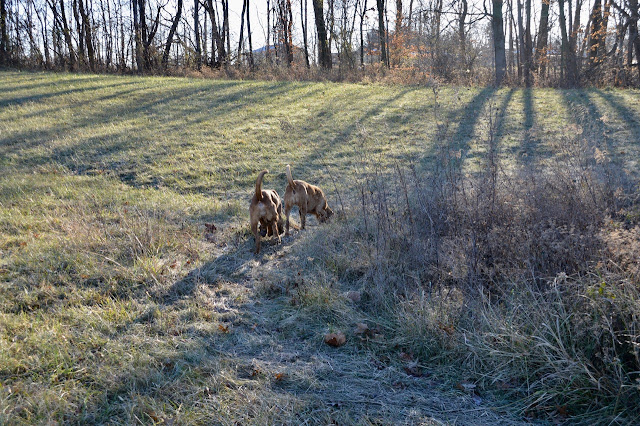 They didn't stay long, following the edge where the field had been mowed. Before I could even catch up they were trotting down the back edge of the field. I had a gut feeling they had locked on to something and might not stop ... so I was aware they might do what they did on Saturday, take off sprinting PAST the 'no-fly zone'. 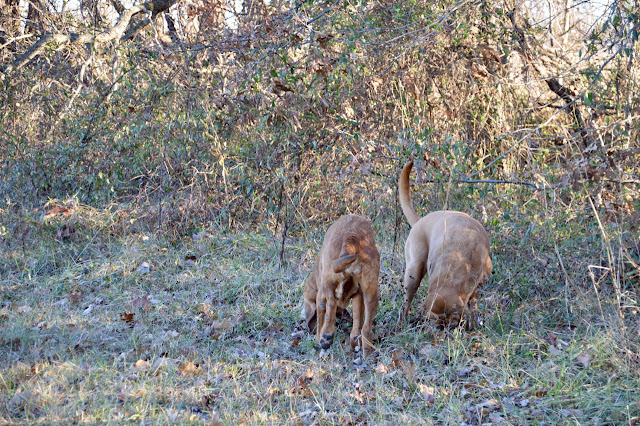 Stella moved out to the left and quickly moved back with Sadie. I could tell she was really on a strong scent. 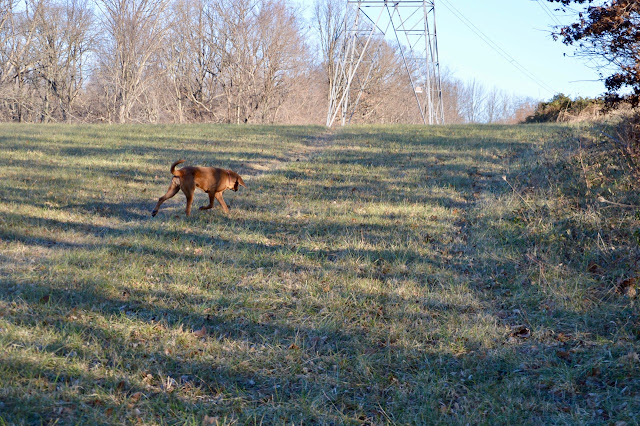 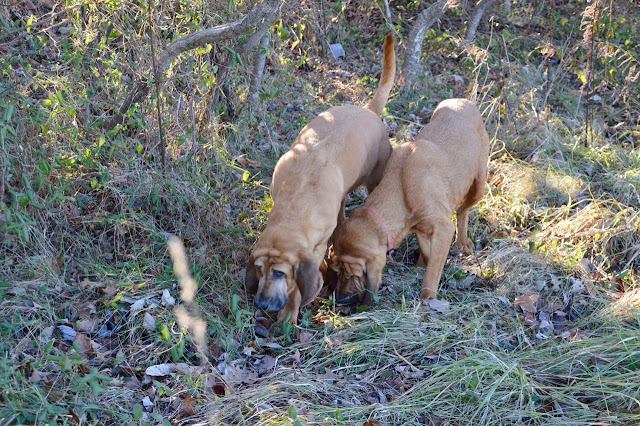 It was at this point in time I had to yell for them to stop. They had both stopped right before this picture, had raised their heads sniffing the air while facing the area they were not allowed to go. 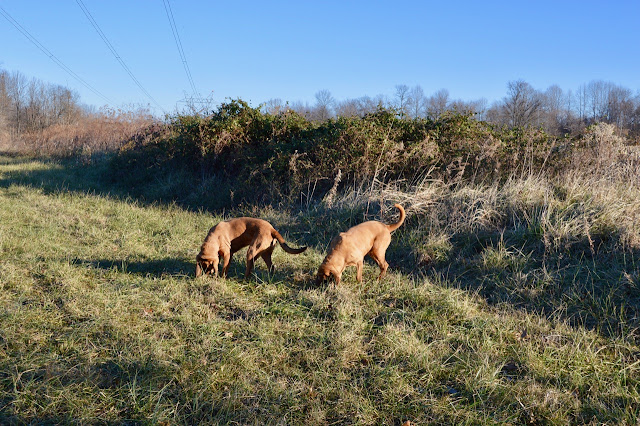 About halfway home, they both stopped and looked in the direction of the neighbors house where they had chased the strange dog the other day. It was visiting for Christmas, so it will not be around much longer. I did not see the dog anywhere on the horizon but the hounds could still smell him. 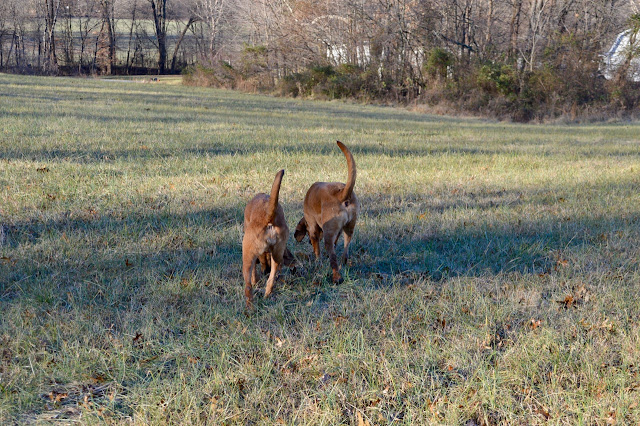 It was like they didn't want to come inside this morning as they veered back to the edge of the field with their noses on the ground and rechecking the path that starts the walk. 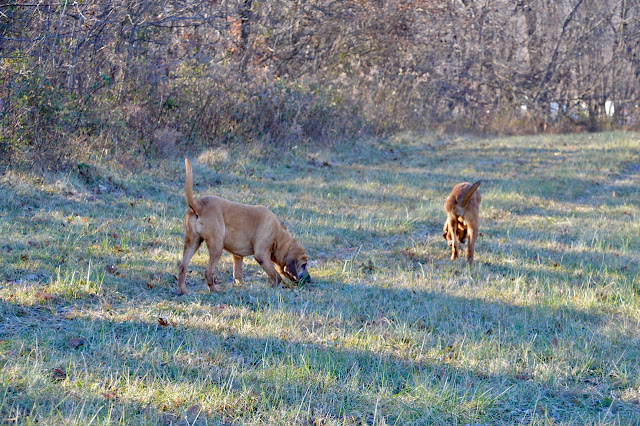 Stella never looks happy when the walk is finished. 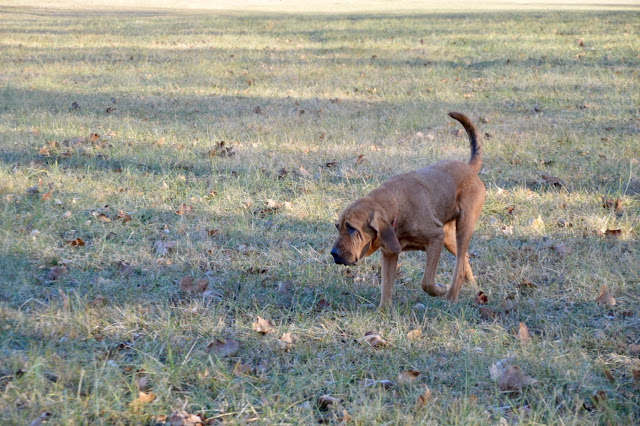 It is quite a change to see I have plenty of gas left in the Mini Cooper tank after driving my usual errands the past two weeks. The inboard computer tells me I am getting 34.5 mpg since I left the dealership just a couple of weeks ago. Plenty of room in back for groceries, with a hidden storage under the cargo area floor that is 8" deep.

There wasn't much planned for this afternoon since I am down to just one room to clean and that isn't more than mopping a small bathroom floor.

I am still going through photographs although I have not scanned anymore of them since xmas day. Cleaning out a closet yesterday I found about a box that had 10 more packages of pictures in it. There were a few old Polaroid pictures of when Harry was a puppy in the summer of 1987. Even at that age of 3 months he would wander off if left unsupervised or like Stella, if you let him roam.

Looking through those new stacks of pictures many were duplicates of what I had put in albums, a few were new and will be sorted once I decide if I am going to sort by dog or by date sequence.

With the large size pictures I can only fit 3 at a time on my scanner for the 'overview' the can capture each individually and scan it. It's a slow process and I am beginning to think if I am serious about this scanning pictures, it might be best to have Office Depot or Costco do the scanning for me with a small fee.

Well it's that time of day where Stella comes over to me and nudges my arm with her nose to let me know it's time for her lunch. With the sunshine out today I can see us doing possibly three walks today. After lunch I am going to let them roam the field on their own while I spend some time outside but I'll be keeping my eyes out for them.