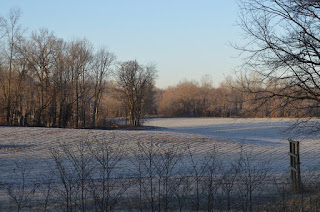 It was the first test for the Mini Cooper Countryman this morning. It passed with flying colors and it was good to see that my measurements in the cargo area were accurate.

While spending some time outdoors enjoying the afternoon sunshine yesterday, Sadie spent most of her time in her newly discovered favorite spot. With the summer brush cut back and that corner of the hay field cut, she likes to check out the small area behind the burn pile. There is a eroded out area that looks like a small waterway may go through there but I've never seen any water traveling that path in the 19 years that I have lived here. 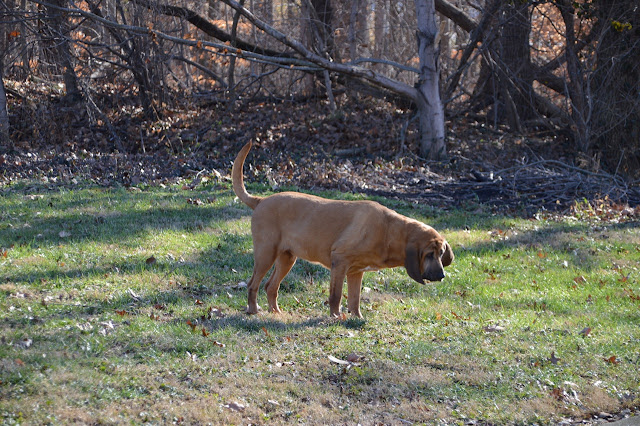 While she stayed in that area, with Stella out in the field, I walked the front and back yards picking up small limbs from the storm the other night. The 2017 burn pile is slowly increasing but not at a fast pace. That usually doesn't happen until after the winter and a few more times where the winds will be above 30mph. 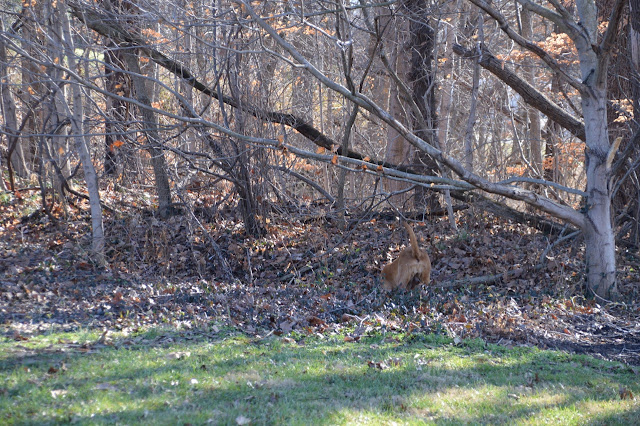 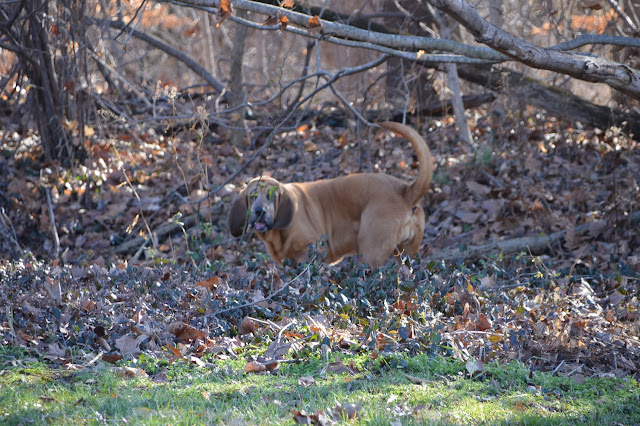 This morning was a different story though. The sunshine was back and will be for a few days before it starts raining by the end of the week. The temperature this morning had dropped into the 20's. With no walks planned until later in the morning I had time to take my one and only container of recyclable paper, cardboard and plastic. Just recently they started requiring glass to be sorted separately.

As I took off the piece that covers the cargo area between the back seats and the back door, I wasn't sure the 32gl container was going to fit although I had measured it before trading for the car. It slid into it's space with no problem. 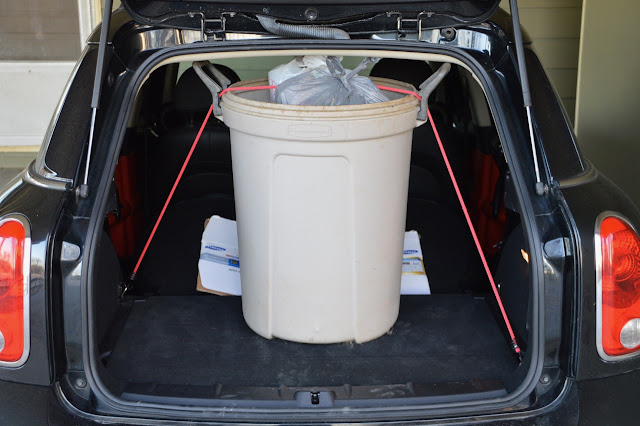 You may see some "paw prints" on that black carpet and you would be right. About the time I opened the rear hatch door to put the container in, Stella jumped in the back and sat there ready to go for a ride. As she jumped back outside I slide the container in with room to spare.

I would get my first chance to drive the Mini off the main highway onto an old country narrow road, which would turn into a long gravel drive toward our local recycling center. I was happy the way it handled both roads and can tell a difference between an AWD and a FWD vehicle of this size.

It wasn't long after I returned where the temps had increased to 34° and Sadie had won with her pre-walk stare down ... that we took our first walk of the day. Heavy frost covered the field of grass except where the sunshine had shown through the trees. 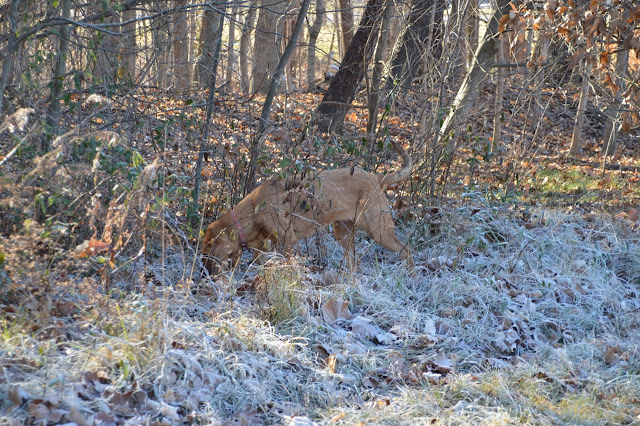 I didn't say a word and let the hounds move at their own pace. 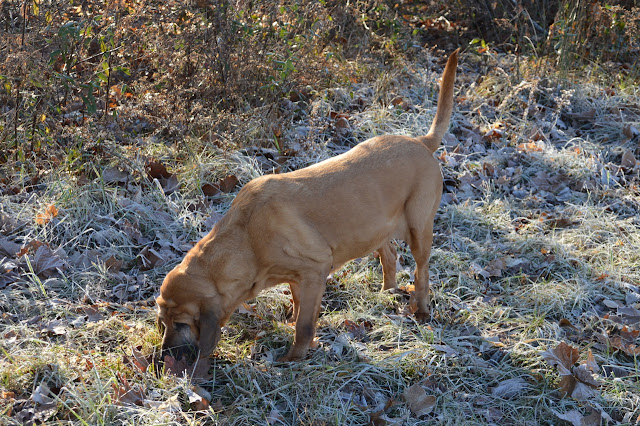 You can barely see here just how far back they were as I approached the first turn. You can also see how the sun shining through the trees have melted some of the frost in certain areas. 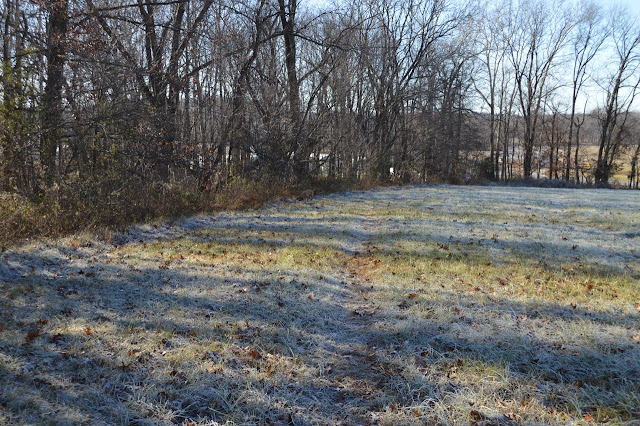 Sadie came sprinting around the first turn toward me into the deer area, like a horse rounding the final turn at the Kentucky Derby. She was flying then stopped immediately and turned back to the wooded area. I am not sure if she heard something or was checking to see if Stella was with her. 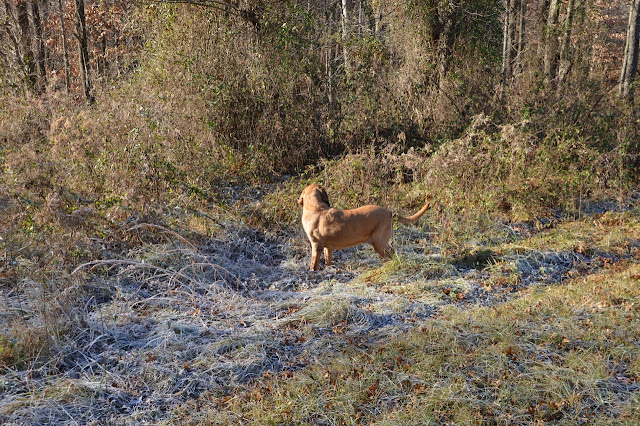 She didn't stay in the mashed down grass long. I suspect by the way it looks I have always thought the deer spend time there. 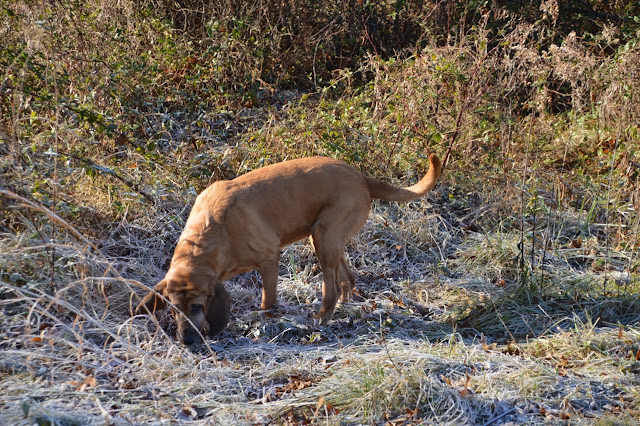 Then she took off on her next assignment. 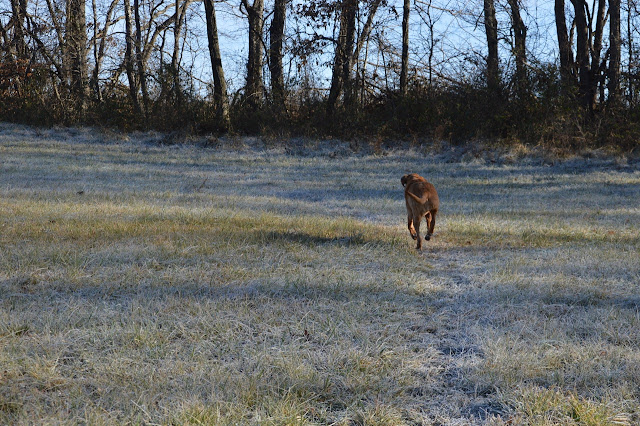 I scanned along the tree line but didn't see Stella at the time. Once I downloaded the photograph to the computer photos program I could barely see Stella sitting on the far right side of the photograph. That also explains how she got so far so fast later on ... heading for that wooded area north of us. 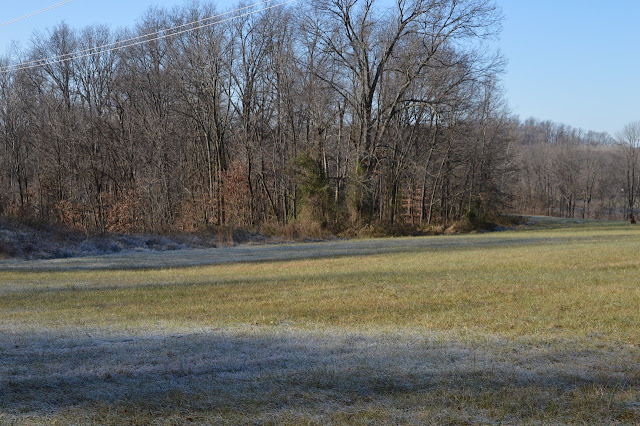 While Sadie and I moved along the back of the field, there was no sign of Stella but I was looking along the tree line that moves into the far right corner. It was the wrong direct since she was running across the field to the opposite side. 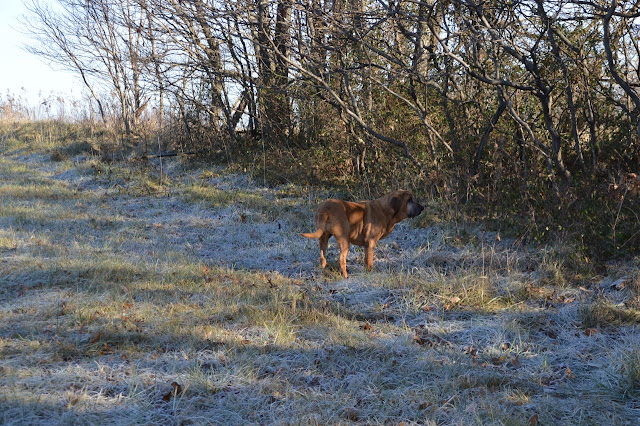 I was surprised as I made the final turn to head back home that Stella was running and was 3/4 of the way to the woods on the north side. I didn't see her during any of her run. She did stop though when I called her name and acknowledged that she 'had been caught' and slowly headed back toward me and Sadie. 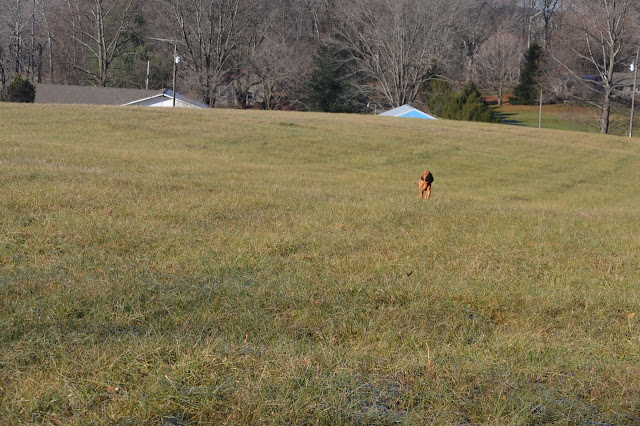 It was a good attempt to get away and she is never too happy when she gets caught. 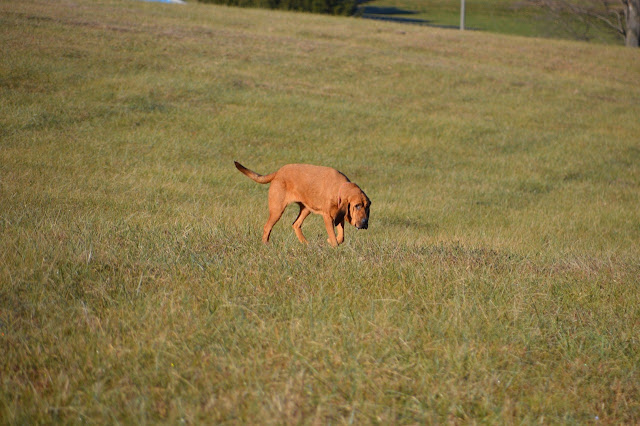 Sadie sprinted to her and touched noses, just to let her know she needed to head home. It's funny to see that on a consistent basis, whenever Sadie touches noses like that, Stella will always turn and follow Sadie or will run to the door at home if she is in the yard. 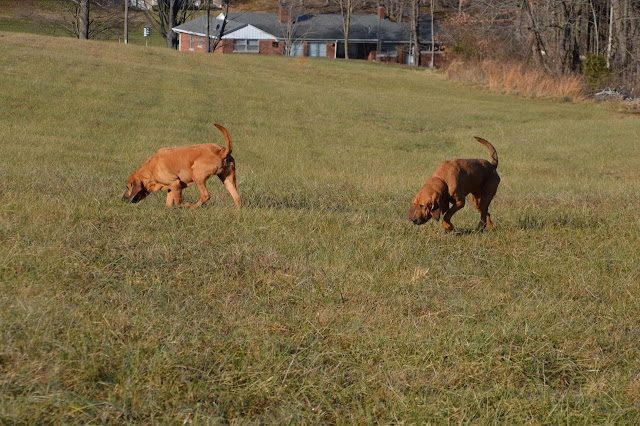 Neither of them waited for me to catch up to them. They trotted away from me and got in one last exploration before I got even with them. 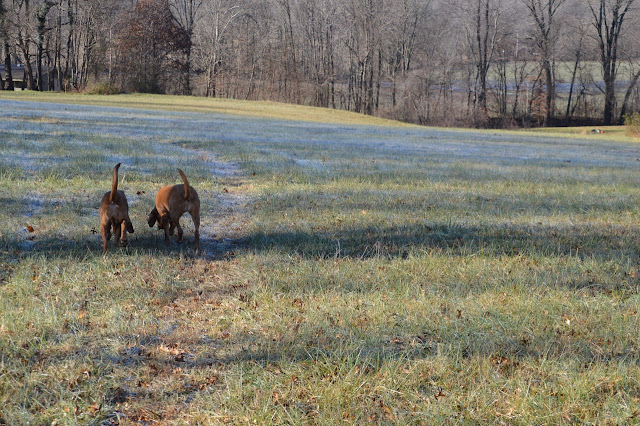 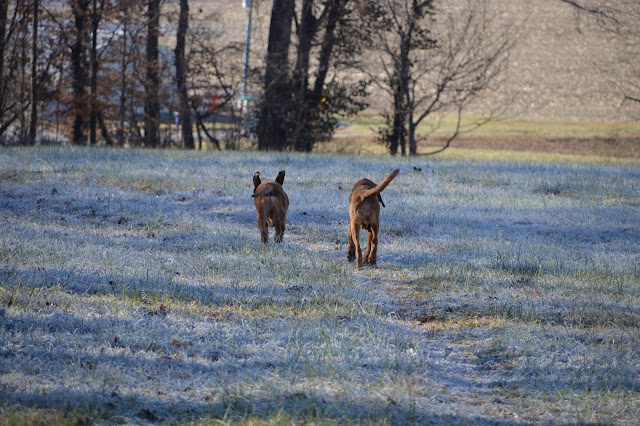 Not sure what will take place today. With it being cold outside it seems like a pretty good day to stay inside and read books. Sadie will bother me a couple of more times wanting to walk but the first of many football games today and tonight, start at 2pm. 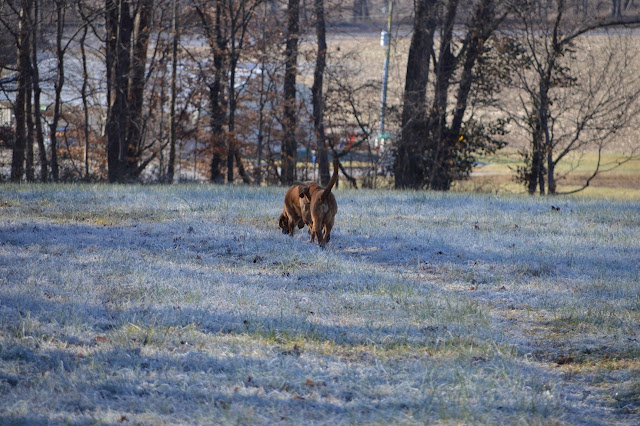 I've decided to scan only the old hound photos that I want to post on the blog and keep the rest of them in the albums of packages. They don't take up that much room, it's just that I don't look at them much since they are out of view, yet I do look at a lot of my pictures that are downloaded in the computer.

Another sunny but cold day here in 'the tropics' of southern Indiana.
at December 28, 2016